Dungeon Stompy is a new Legacy deck built around the Dungeons and Initiative mechanic. A mono-white Stompy deck was born when two new white creatures – [[White Plume Adventurer]], [[Seasoned Dungeoneer]] – both of which have the Initiative mechanic were printed. These creatures with the combination of other disruptive creatures to maintain Initiative is what makes this deck so powerful. Going through the Undercity dungeon generates lots of advantage that can be hard to beat. Dungeon Stompy has been putting up great results and has been increasing in popularity, so if you want to be successful in Legacy, you must be prepared for the matchup.

How does The Dungeon Stompy matchup against TES?

[[White Plume Adventurer]], [[Seasoned Dungeoneer]] – These are the two creatures that the deck is based around and are the key components to why this deck is successful. They aren’t as important against TES because if the game is going long enough to get through the Undercity dungeon, then we’ve probably already lost. In other matchups, these cards are extremely good and compliment the rest of the deck with the additional abilities.

[[Thalia, Guardian of Thraben]], [[Archon of Emeria]], [[Elite Spellbinder]], [[Aven Mindcensor]], [[Anointed Peacekeeper]] – Dungeon Stompy doesn’t have a set decklist as there are several flex slots for different disruptive creatures. We can expect to play against any of these creatures, and all of them disrupt us in different ways. Our sideboard answers also line up against these creatures differently, so that’s reason why our sideboard is a mix of answers.

Our game plan is to assemble a quick combo along with interaction for us to combo through their disruption. If we can’t combo on the first turn, there is a good chance we will be up against some disruption. Dungeon Stompy plays mana accelerants to power out disruptive creatures and [[Chalice of the Void]]. Most of these will be tough to combo through, so we need to try and win before they come down or have some way to remove them. Game one, our deck is built around [[Galvanic Relay]], which requires passing the turn. That’s not what we want to be doing in this matchup, so keeping hands that have a different combo route is key to winning before the disruption is on the battlefield. Post-board, we have plenty of answers, so we want to keep a hand with them or a turn-one win. Not all of our answers line up against all of their disruption perfectly, but that’s the risk we have.

Sideboarding in this matchup is pretty straightforward. [[Veil of Summer]] doesn’t do much except for helping resolve spells through a [[Chalice of the Void]] on zero or two, but that’s not worth it. [[Galvanic Relay]] isn’t the game plan we want in this matchup. Setting up future turns and trying to gain card advantage isn’t how we are going to win. We want to try and win the same turn we have the opportunity to combo. In order to make that happen, we bring in our answers to their problematic permanents. [[Abrupt Decay]], [[Chain of Vapor]], [[Dress Down]], and [[Crash]] all answer lock pieces and their disruptive creatures, but each one is better against different things and scenarios, so that’s why there is a mix of each answer.

For this month’s example games, I have two games from different matches, and both are postboard games. For the first one, I was on the draw and kept a six card hand with a turn-one [[Echo of Eons]] and [[Crash]] for a potential [[Chalice of the Void]]. My opponent played a turn one [[Anointed Peacekeeper]] and named [[Echo of Eons]]. Thankfully, with the [[Rite of Flame]] and [[Lion’s Eye Diamond]] the opponent didn’t have anything they could name to prevent me from casting [[Echo of Eons]] on turn one. I went that route and played the [[Dark Ritual]], [[Lion’s Eye Diamond]], and then sacrificed it to flashback [[Echo of Eons]] for the five mana using the three blue and two black. 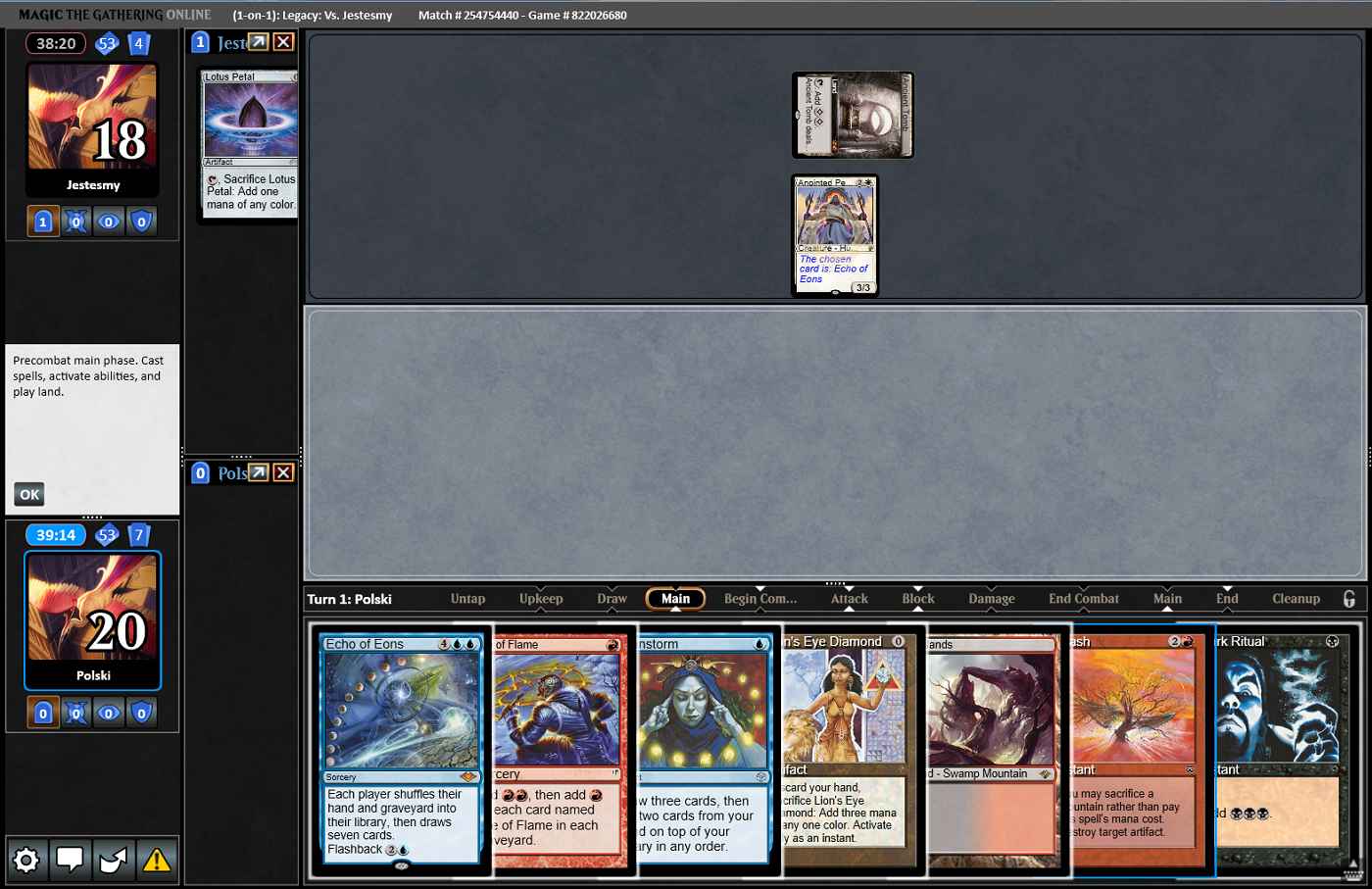 I couldn’t continue comboing from there, but I drew two copies of [[Rite of Flame]], [[Ad Nauseam]], [[Chain of Vapor]], [[Brainstorm]], and two lands. I had to pass the turn back. My opponent then played a second turn [[Thalia, Guardian of Thraben]] and just attacked. On my second turn, I drew a [[Tendrils of Agony]] and just played a land and passed the turn. My plan was to end step cast the [[Chain of Vapor]] on the [[Thalia, Guardian of Thraben]] and win on my following turn. I would need my opponent to not have another form of disruption. Unfortunately, they did in [[Chalice of the Void]] on zero and attacked. I did just as I planned on the end step and cast the [[Chain of Vapor]] on [[Thalia, Guardian of Thraben]]. 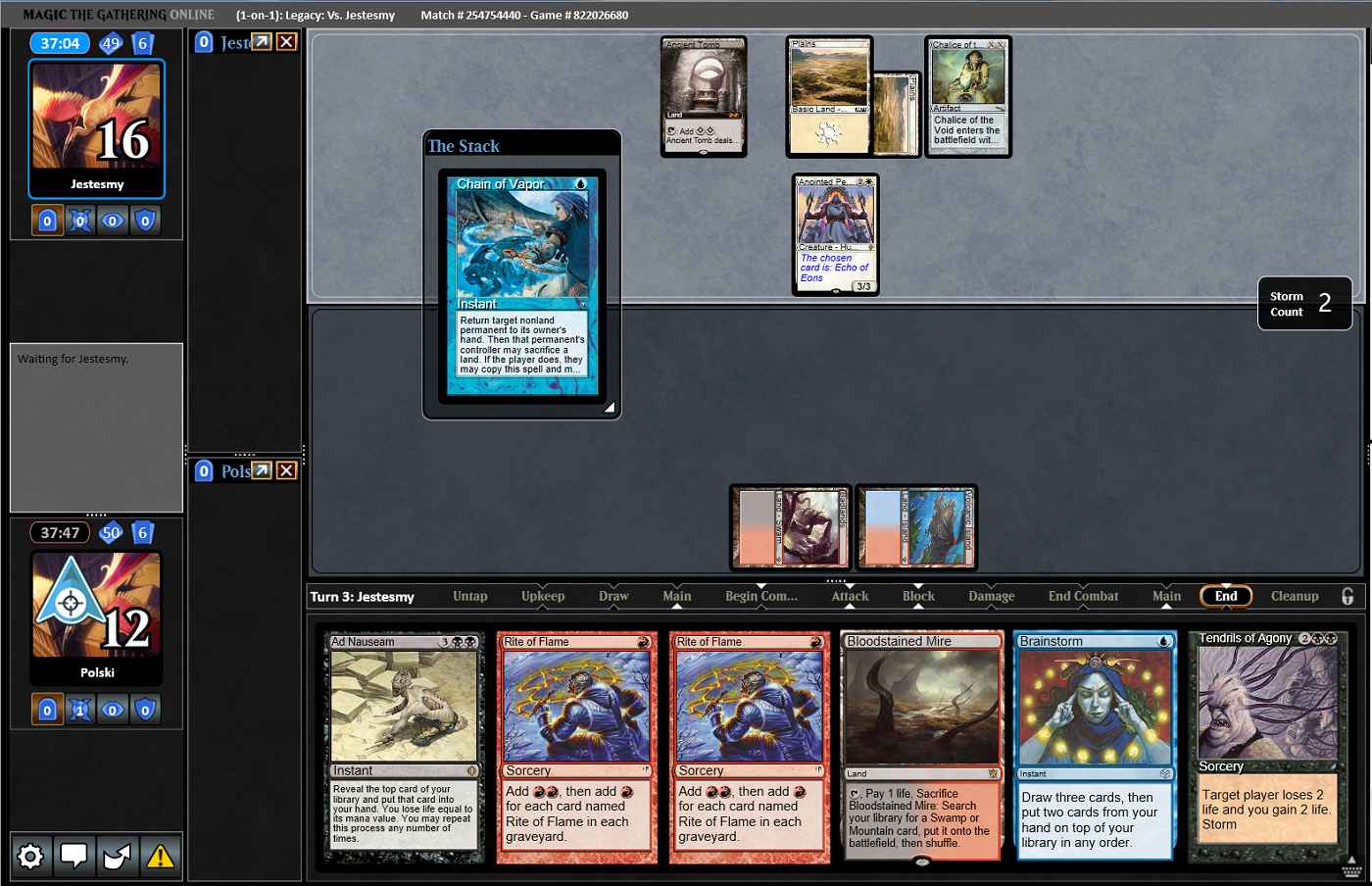 That let me untap and use my lands plus both copies of [[Rite of Flame]] and the [[Dark Ritual]] I drew for my turn to cast [[Ad Nauseam]]. With the [[Tendrils of Agony]] in hand, I just needed to draw some more rituals that weren’t zero mana. 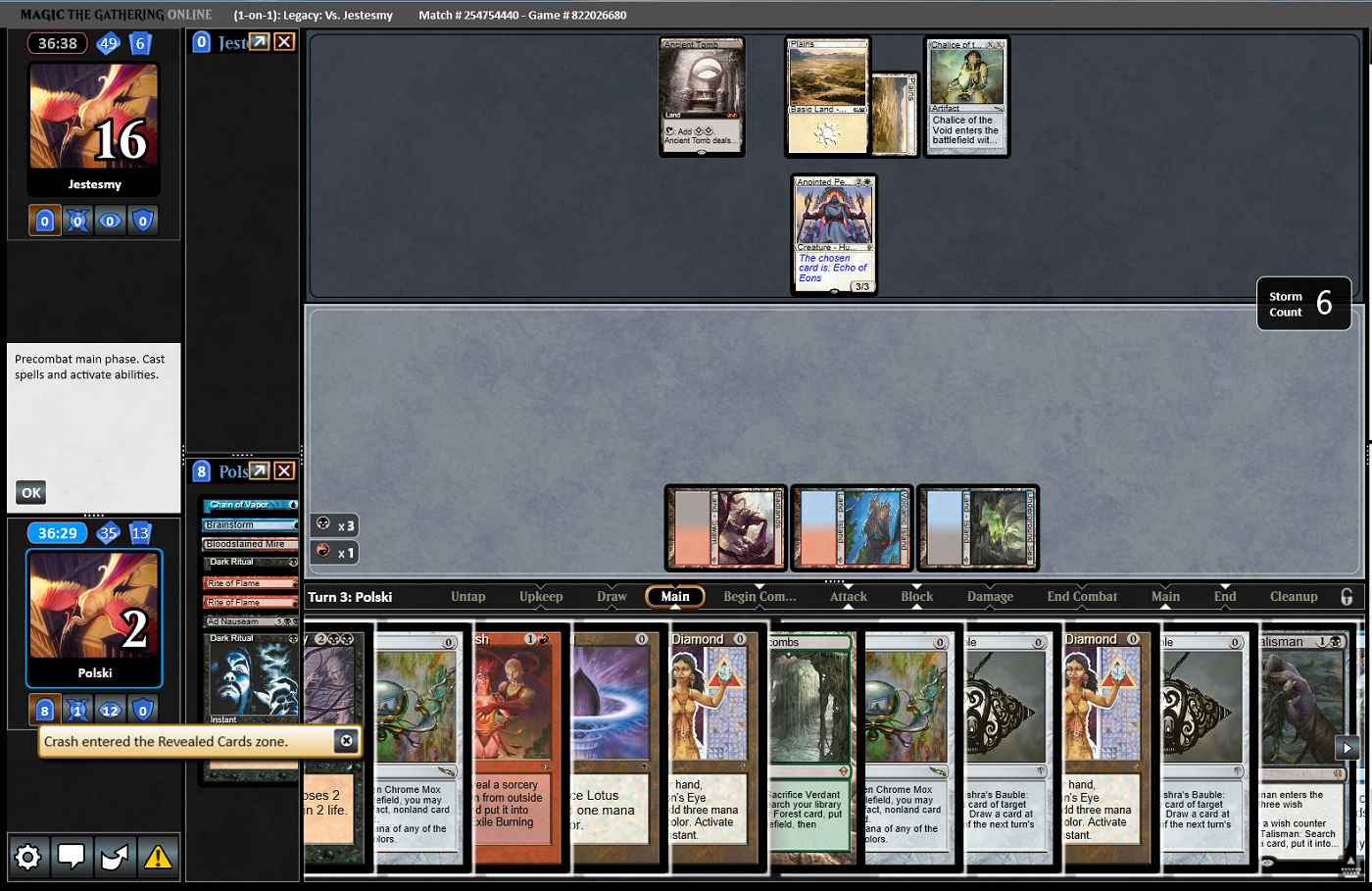 I revealed a [[Dark Ritual]] and some zero mana artifacts to increase the Storm count, and that was just enough mana to cast [[Tendrils of Agony]] to win the game. 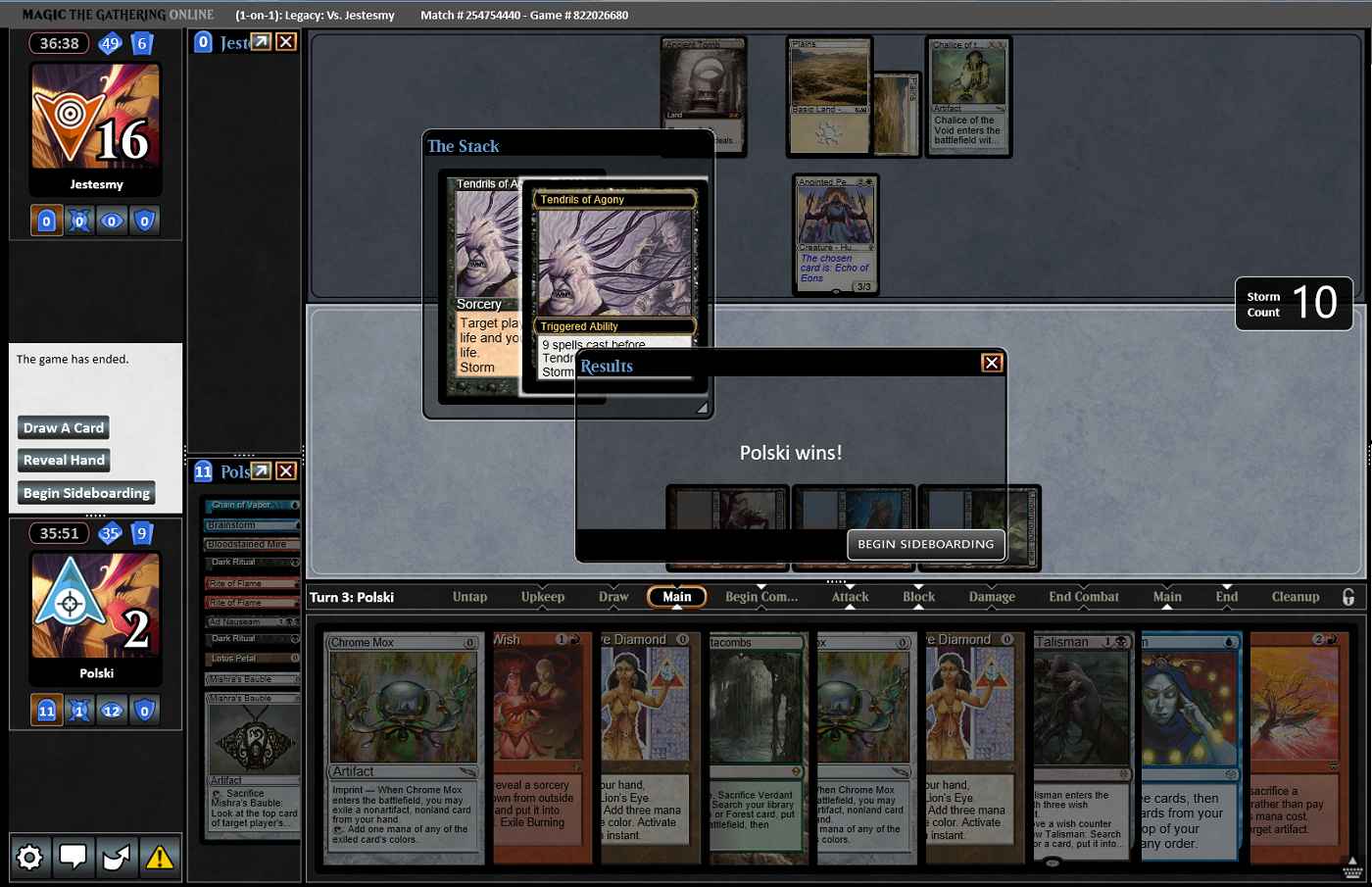 In the the next scenario, we are a few turns into the game. The opponent had a [[Thalia, Guardian of Thraben]] and a [[Seasoned Dungeoneer]] in play. I had played a [[Brainstorm]] earlier in the game looking for lands and didn’t find any, so I have been missing land drops. Additionally, I had to discard an [[Echo of Eons]] on my previous turn. I had an [[Abrupt Decay]], but not the third land to cast it. I could have used [[Dark Ritual]], but then I wouldn’t have been able to continue comboing for the turn. I needed a third land, so I just passed the turn and hoped to draw a land on my next turn. 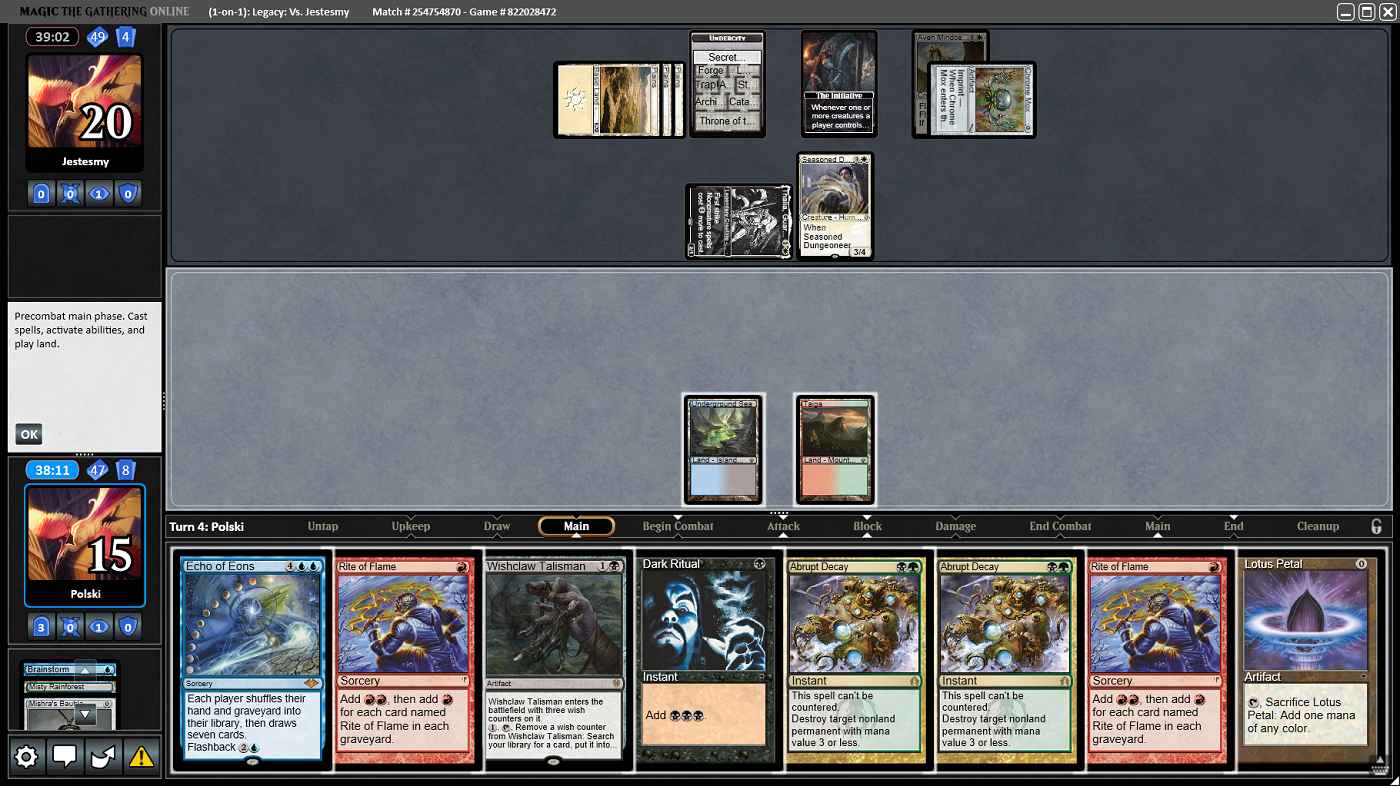 The opponent played a second copy of [[Seasoned Dungeoneer]] and progressed through the Undercity dungeon getting two +1/+1 counters, and I lost five life. After they attacked, I was down to two life. I needed to draw a land on my next turn, or I would lose. I took my draw step, and it was the third land. I sacrificed the fetch land and went to one life then used all three lands to cast [[Abrupt Decay]] on [[Thalia, Guardian of Thraben]]. 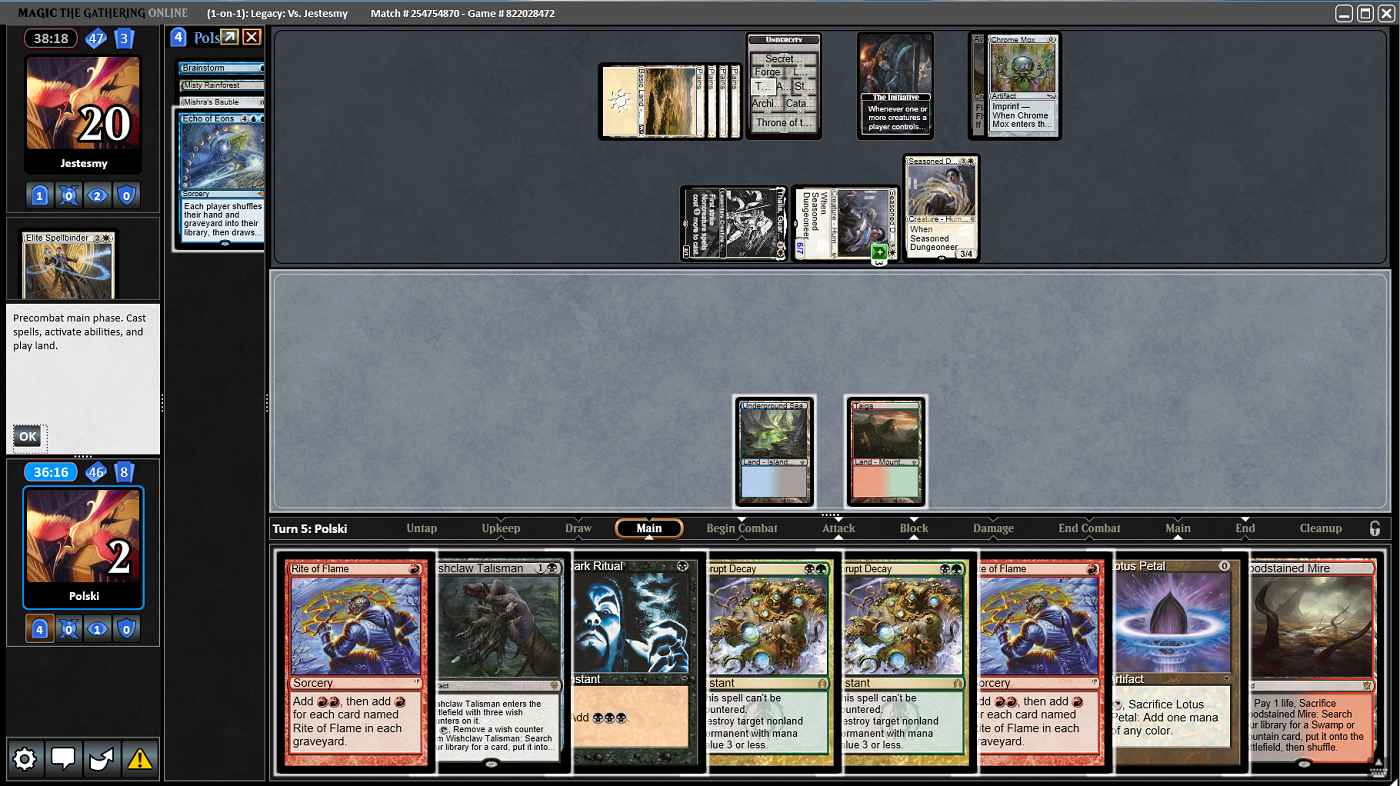 From there, I was free to combo, but I only had access to one initial mana source. I played the [[Lotus Petal]] and then the [[Dark Ritual]]. Using the three black mana, I played and activated the [[Wishclaw Talisman]] for [[Lion’s Eye Diamond]] and was able to flashback the [[Echo of Eons]] I discarded on a previous turn. I drew my seven cards, but it was not good enough to win the game. 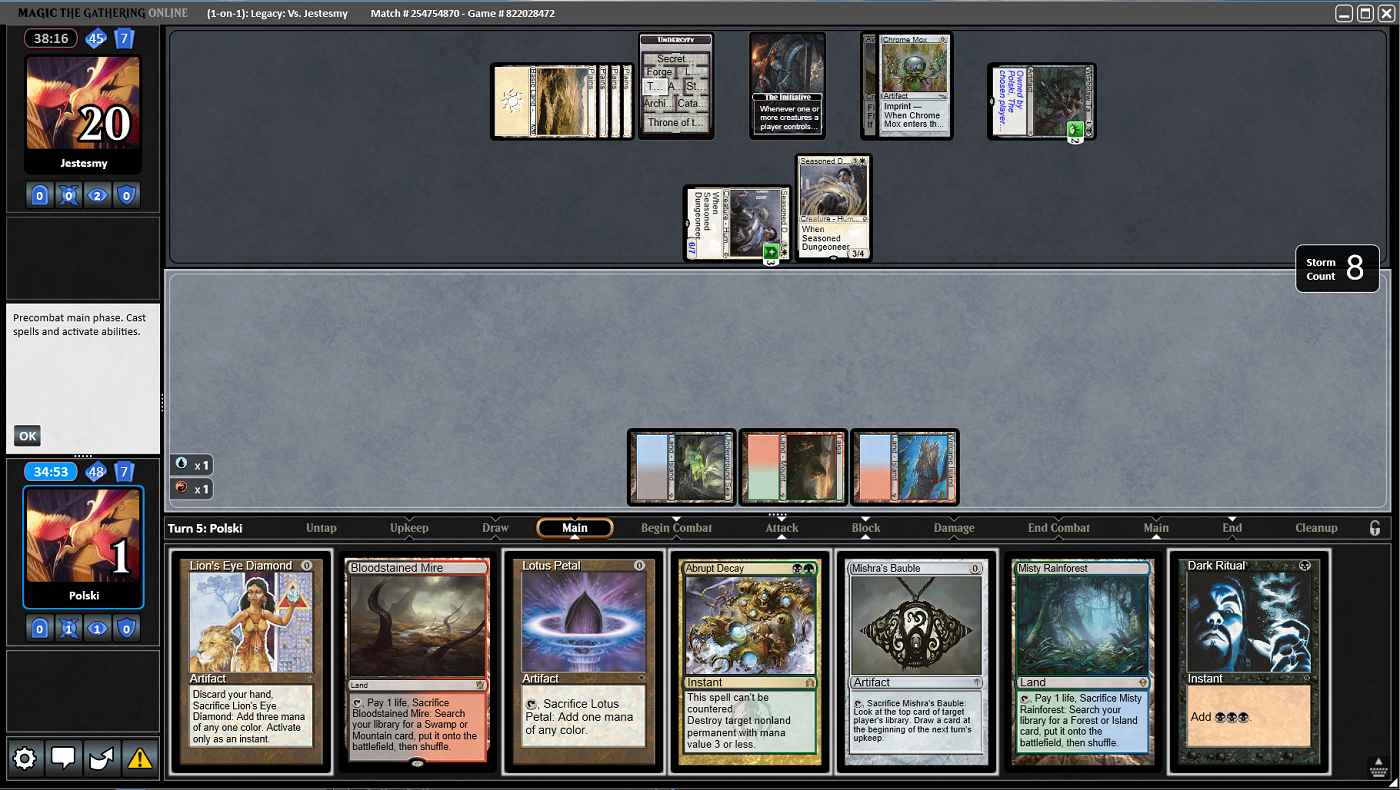 I don’t think I played the second game the best I could have, but this matchup is a tougher one. It is recognized by additional sideboard cards in [[Dress Down]] to answer annoying creatures. Dungeon Stompy is one of my favorite newer Legacy decks. I really enjoy playing with the Initiative mechanic, and it adds a new angle to approach the Legacy metagame. I hope Dungeon Stompy continues to see success and remains a strong Legacy deck, but not as good as TES. If you want to be successful in Legacy, you’re going to need a game plan to beat Dungeon Stompy. I hope you enjoyed this article, can take some of the lessons learned, and apply them to your own playtesting.