We’re back with the mailbox, here are some more Q&A’s:

I’m relatively new to Legacy but I’ve been playing magic for a number of years now. I was wondering if you could help answer some of my questions about some decks and the format. I play modern combo and I have played modern storm (post-Seething Song) and I was thinking about branching into legacy. I’ve seen all these cool combo decks from T.E.S. and other storm variants to Omni-Tell to Doomsday and even Spanish Inquisition. I wanted to know your opinion on legacy combo decks and what might be there strengths and weakness, good and bad metas for them, and what’s the most fun really?

Omni-Tell / Sneak & Show – These decks play as combo-control, not particularly good at the moment. They prey on Miracles due to having a real mana curve and powerful effects. That said, they’re the slowest of the decks listed.

Spanish Inquisition / “Oops! All Spells!” / Belcher / Dredge – The “Glass Cannons”, blazing fast but not very resilient – they each have their own weakness. I don’t think any of them are very good against hate pieces, they each struggle if the opponent can interact meaningfully. I wouldn’t recommend any of these to anyone. Out of the listed decks, I would consider Dredge to be the best one – even then I don’t think it’s good at the moment.

TES / ANT – In my opinion, these are the best combo decks in the format. Resilient and consistent while being fast, they’ve been merging closer and closer over the last few years. TES tends to be quicker (winning with Ad Nauseam and/or Empty the Warrens), meaning it’s better in match-ups where you need to be fast and can steal games with it’s quickness against blue decks. While ANT tends to be better against traditional blue decks (winning with Past in Flames and/or a natural Tendrils of Agony), grinding them down and winning with Past in Flames. If you’re looking for more on the subject, there’s plenty of materials elsewhere on the site.

Doomsday – You can view my thoughts on this deck in my last TES mailbox.

Elves – Another consistent and resilient deck, unlike the storm variants, it’s better at winning against hate and even better in the long game. The beauty of Elves is the alternate win condition of being able to just attack and wear down your opponent.

If you were to play a sideboard artifact hate card for Chalice of the Void and Trinisphere, what would it be?
Shattering Spree or Meltdown?

I assume you mean as a Burning Wish target? I probably wouldn’t play either, I would most likely reconfigure the mana base for a second Volcanic Island over the Swamp and play Pulverize. This way, you can float mana, kill Chalice of the Void (more common than Trinisphere by a large margin) and then combo off. That said, I recently wrote an article on “How to Build a Sideboard” which explains the thought process on why I wouldn’t play a dedicated artifact hate card in my sideboard.

Are you concerned about the new Eldrazi deck?
I imagine it’s not a good match-up for Storm.

I am and am not. It seems weird when I write it out, but I’m obviously concerned about any possible threat of a game one Chalice of the Void. That said, I don’t believe these decks are worth the hype they’re receiving on the Legacy front (Modern is a different story). They’re still decks that don’t have Ponder, Brainstorm and other various fixers to support them. Variance, unfortunate draws and other scenarios of essentially playing a MUD deck will catch-up to them over a large event. In my opinion these decks just aren’t built for a fifteen round event, I would be shocked if more than one was in the top 8 of StarCityGames: Philadelphia.

That said, I’m aware that tons of people are trying to port over the ever-so-popular Modern deck. This has resulted in me playing a diverse sideboard card to help adjust to these Chalice of the Void numbers. I will be playing a fourth copy of Abrupt Decay as it has uses against arguably the best deck in the format – Miracles. It’s all about versatility – which is why I don’t play dedicated artifact hate. What is the Eldrazi deck is a flop or you just don’t even play against it? You’re essentially playing a fourteen card sideboard.

Star City Games: Philadelphia is this weekend, do you ever get nervous going to these events?
It’s a lot of pressure in my past experiences.

I wouldn’t say nervous, I love the rush of large events! If anything, I think anxious is the appropriate word. I’ve been playing the game a very long time with Legacy always being my primary focus, even back to the days the format was called “1.5”! Since then, I’ve met a lot of great people and I look forward to seeing them at these types of events.

As for the actual event, I try not to play games for fun in-between rounds as it doesn’t give your brain time to relax and decompose from the previous fifty minutes. I also make sure that I enter each round level headed and not thinking about the previous round, what’s done is done. No need to dwell on previous plays or mistakes, that will only harm you more in the present. I sometimes tell myself to, “just breathe” in high-stress scenarios, it’s easy in a tight game to get flustered or uneasy. My last bit is more personal, but I try to carry a few sodas – keeping the caffeine flowing is what keeps me focused towards the end of these long events.

Well, I’m in a weird scenario as well. I keep 4 in my deck box at the moment, they are 2 RK Post Goblin Tokens since they match my storm counter and mana counts. I also have two Pete Venters Unglued Goblin Token since they match my Rock Lobster, Paper Tiger, Scissor Lizzard, Super Secret tech, Mize, Cheaty Face and Johnny, Combo player. That said, I’m a pretty big fan of the M10 Goblin Token by Dave Kendall – it actually comes in Japanese too unlike the others. 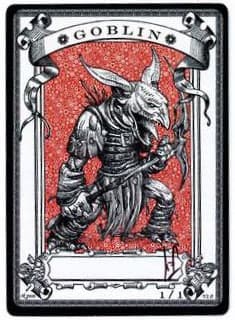 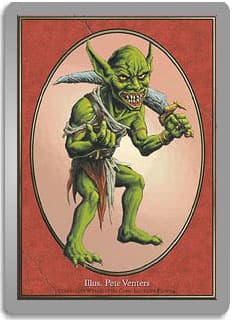 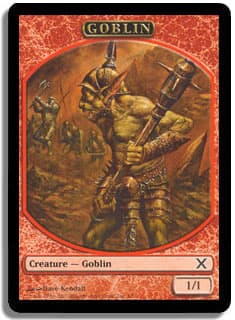 If you’re interested in asking a question, use the contact form below with the subject line of “TES Mailbox” to submit your question!