Magic: The Gathering has graced us with some fantastic cards from the new set – Magic Origins! These two hot previews are prime for the breaking. The first being a functional reprint of the classic Demonic Tutor, while the second is essentially Time Twister. Both of these cards have potential in The EPIC Storm, which one is better? I’m not quite sure. 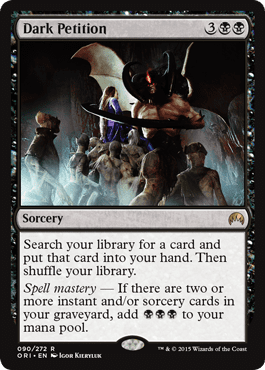 My initial impression of this card was very much like everyone else’s, “Woah, this card is pretty sweet!”

When you take a closer look at it, it’s not quite as good as everyone thinks it is, but it’s still decent. In the current storm decks (TES & ANT), you have to look at it’s mana cost, it simply doesn’t play well with Ad Nauseam. In lists with Burning Wish it’s the card we’ve been wanting for some time, it will finally stop the argument on the configuration of Infernal Tutor between the main deck and sideboard. Having a tutor effect in the sideboard opens up a line to be able to cast Burning Wish, retrieve a Tutor and cast it searching for Ad Nauseam. Essentially giving the storm deck numerous ways to find one of it’s best spells.

In lists without Burning Wish, they’ll be looking to cut Grim Tutor, Ad Nauseam and likely some number of Preordain and possibly the second Past in Flames (If they play it). This effectively raises their threat density to be on a level similar to TES.

There’s the argument that this card is good enough to shape its own storm shell, I don’t know if I believe that to be true. I’m open to be proved wrong.

Positive things about this card:

Negative things about this card: 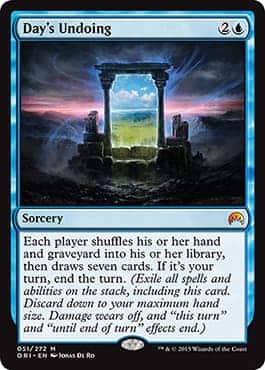 My initial impression of this card wasn’t like everyone else’s, it was more along the lines of “This card is probably poop…” Perhaps I didn’t give the card a fair chance.

Looking into it further, there’s definitely some cool applications. The first being that it has a real cute application in Modern Storm with Quicken during the opponents’ turn. In Legacy it makes cards like Chrome Mox, Lotus Petal and Lion’s Eye Diamond a lot more valuable as you can lay them on the table before casting Day’s Undoing. Being a storm engine that doesn’t use the graveyard and is life independant isn’t something to be overlooked. It’s also one of the cheapest casting functional reprints of Time Twister we’ve received from R&D.

Now my skepticism, one of the major downfalls that in my eyes it’s likely worse than Diminishing Returns. A card these storm decks used to play. While it doesn’t exile the top ten cards of your library, you can have a similar effect that doesn’t end the turn for a mere one mana. Ending the turn is dangerous in Legacy as it leaves a number of awful things to happen to you. For example: Show and Tell, Counterbalance, Hymn to Tourach, Natural Order, etc.

I just see this card as another Time Reversal, not quite good enough.

Positive things about this card:

Negative things about this card:

The previews of these cards have been quite exciting, I hope that Magic Origins gives storm combo a few more new toys! These cards if both would end up being playable would likely fight for the same sideboard slots which would make things difficult. Hopefully if there’s anything else that would be great from Origins it would be good enough for the main deck!

Until next time, keep Storming!

Bryant Cook has one Grand Prix Top 8 as well as nine Star City Games Top 8s (two wins). You can find Bryant's daily sweet Storm videos for every format on our YouTube Channel, including some recent videos featuring The EPIC Storm v12.4! Bryant is also a host of The Eternal Glory Podcast, as well as a Web Designer, New York Mets fan, and all-around nerd.