It is time for yet another edition of the TES Matchup Battles series and this episode we take on UR Delver! Over the past couple of months people have been playing more BUG Delver, Grixis Delver, or cutting Delver of Secrets to go a little bigger with cards like Leovold, Emissary of Trest. UR Delver has never really been the most popular Delver of Secrets variant, but it has always seen play.

UR Delver plays out similar to the old counter-burn strategies. It’s trying to kill the opponent quickly with aggressive creatures and burn spells while trying to counter the opponents relevant cards in the early turns of the game. The spells are very efficient and cheap to be able to play multiple spells a turn, and that allows the deck to be one step ahead of the opponent in the early game. The deck has to try and end the game as quickly as possible before the opponent catches up.

In legacy there are numerous decks and variations of decks that are competitive, and that’s one of my draws to the format, but if I was a betting man I would not have bet that UR Delver would have been in the finals of GP Vegas. UR Delver has been a very small percentage of the metagame ever since the printing of Delver of Secrets, so it has been around a while, and thus very well tuned. Having a very well tuned deck with a fast clock that plays blue cards can’t be a bad formula for attacking the legacy metagame, and Jonathn Semeyn proved that by only being one win away from holding the trophy, but congrats to him on his finish. Could his take on UR Delver cause a rise in popularity? Who knows yet, but it’s always better to be ahead than to be behind, so let’s get analyzing.

How does UR Delver matchup against TES?

Force of Will – If you’ve played TES before you know we are going to have to beat this card. One way or another, or pray they don’t have it in some scenarios. This is their best disruption spell because it will usually require an answer in the form of a discard spell because we can’t really ever combo off into these counters unless the opponent counters the wrong spell, messes up, or we have multiple tutors. No matter how late the game goes we are going to have to find a way to beat this card.

Daze, Spell Pierce – Most lists I have seen run 4 Daze and 1-2 Spell Pierce in their 75 as some of their flex slots and it’s because of these cards that prevent us from going off a lot of the time on turns 1 or 2 on the draw and turns 2 and 3 on the play because of how likely it is that they have one or a Force of Will. The later the game goes thus more land drops we make is one way we can beat these cards, by making them weaker. Also just knowing about these cards when we see their hand allows us to play around these cards a little better instead of just trying to combo off as soon as possible and running right into all of this soft permission that gets worse the later the game goes.

Eidolon of the Great Revel, Pyrostatic Pillar – The real hate. These cards require a very specific hand and board state to try to win through and will most likely require an answer. There’s a couple of different ways to try and beat these cards.
1. Combo off before they can cast them. TES is very fast and consistent at killing quickly, and trust me it feels really good to combo off with all the hate in the opponents hand. The downside to this is that they play Daze, Force of Will and other counters to make this a little more challenging.
2. Use discard spells to strip the hate away. We have 6 discard spells to hit Pyrostatic Pillar and 3 that hit Eidolon of the Great Revel
3. We also have 3 Echoing Truth if either one hit the battlefield.

There is some even better news though! The list that got 2nd at GP Vegas played neither of these cards, so hopefully if people move to UR Delver that they start with that list and then we won’t have to worry about these pure hate cards.

Killing Them and the Fundamental Turns –

TES is great at being a fast and consistent deck and being able to kill through multiple different angles like goblins or straight to the life total. In some matchups one method of comboing is better than others. For example goblins aren’t great vs other fast decks like Belcher, ANT, Show and Tell etc. In comparison it is the preferred way vs decks like Burn, Eldrazi and other decks that are attacking our life total or that we need to combo off before all their hate pieces can be cast. The good thing about this matchup is that we don’t have to focus on one method and completely ignore the other. Both are fantastic here. Turn 1 making 10 goblins will be good enough and trying to Tendrils of Agony them on turn 3 or 4 could also be good enough. In this matchup it is all about evaluating each individual game. I know when I go to a legacy tournament with TES I don’t expect to be doing a whole lot of combat math, but sometimes goblins may not be able to race a Delver of Secrets or their burn spells, and sometimes they may have enough blockers and be able to use their burn spells on our goblins to stabilize. We have the ability and have to be flexible and change our game plan based on the opponents hand and the board, and this is why these types of decks are traditionally a good matchup for TES.

So, let’s take this matchup back to the basics. The opponent is ultimately trying to attack our life total with their aggressive creatures and their burn spells. Using our life total as a “resource” isn’t that good of a strategy in this matchup. With that being said it makes it pretty obvious to take out the 5 cards that use our life total. Ad Nauseam is really only going to be good turns 1 or 2, but outside of that, as our life total dwindles, it becomes uncastable without significant risks. UR Delver is going to try and disrupt us through 2 different angles, counterspells and permanents. They don’t have any discard or a combo of their own, so when sideboarding I try to counter those angles. Bringing in Defense Grid for all of their counterspells and Echoing Truth to answer resolved Eidolon of the Great Revel and Pyrostatic Pillar. These cards are pretty difficult to beat if resolved so we need these answers. We also have our 6 discard spells to help take anything that would stop us from comboing off, so this configuration gives us answers to all of their cards without diluting our deck too much, so we can still combo off quickly.

Game 1 and we already have an immediately interesting scenario. I was on the play and my opening 7 is an easy mulligan. I take a look at my 6 and I keep and scry. 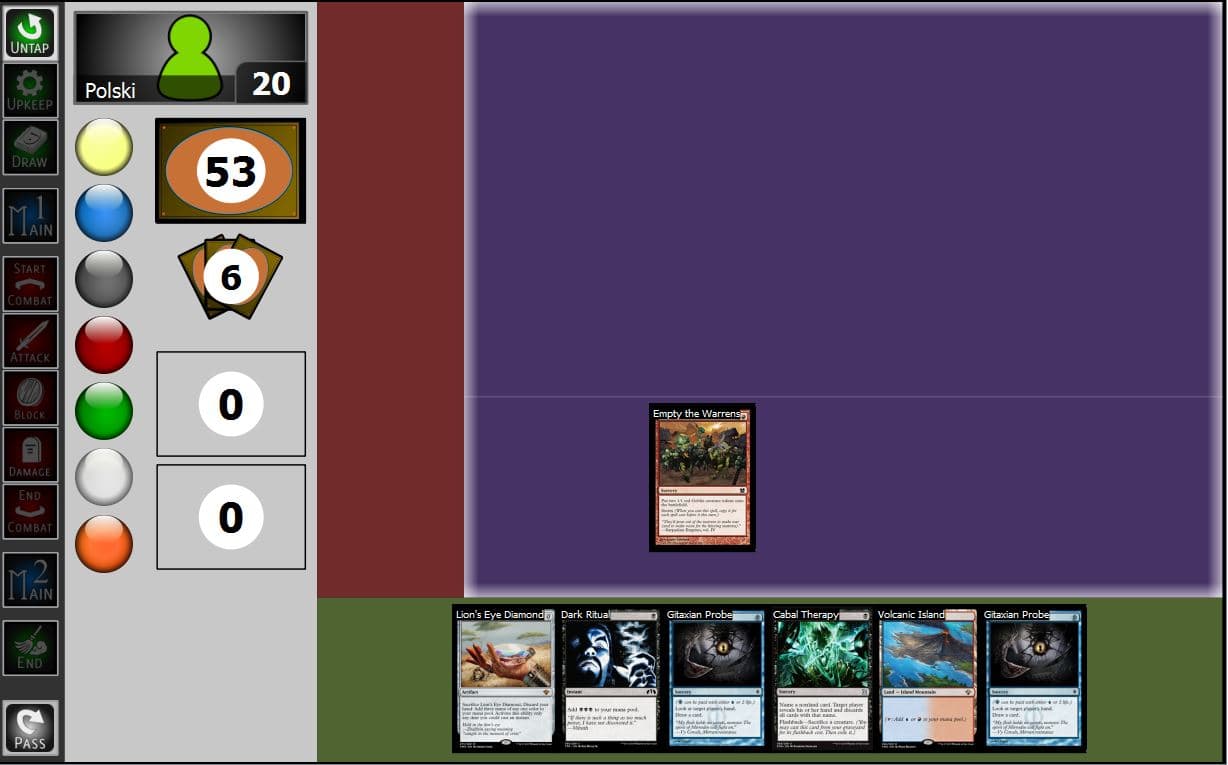 Being on the play I can basically start the game with 6 goblins in play. I can play my land and Lion’s Eye Diamond and then cast the Gitaxian Probe. While holding priority sacrifice the Lion’s Eye Diamond for any color. After Gitaxian Probe resolves I can see their hand and draw the Empty the Warrens and then proceed to cast it off that mana. Because Empty the Warrens is the very top card I have to do this off the first Gitaxian Probe. It does not work after the second because then it will already be in my hand, which means I can’t get information before making this decision and I get one less storm. I think this could be fast enough, and I know there won’t be a Terminus or a turn 1 kill from the opponent because I know the mathchup. If he has Force of Will then he could counter 1 copy and I don’t think 4 goblins is good enough, so there is some risk here. 6 goblins may not even be good enough with a blocker and a removal spell. I end up going with this line, and he does not end up having the Force of Will, but fortunately I won the game. He played a Delver of Secrets, which didn’t end up flipping, so it had to trade with a token and he had no removal spells.

I sideboarded exactly how I described above and went into game 2 on the play. This game goes similar to game 1 in that I am mulliganing. The first couple of turns nothing really happens. I don’t do anything and he doesn’t either for his first turn. I have all the mana, but missing a business spell. On his second turn he untaps, plays his second land, and then immediately slams Pyrostatic Pillar. It resolves. Great. Now I either have to find one of my 3 Echoing Truth or try to combo off through it somehow. The longer the game goes the harder that will be, so I hope for the best and untap. Draw step. It’s Burning Wish. 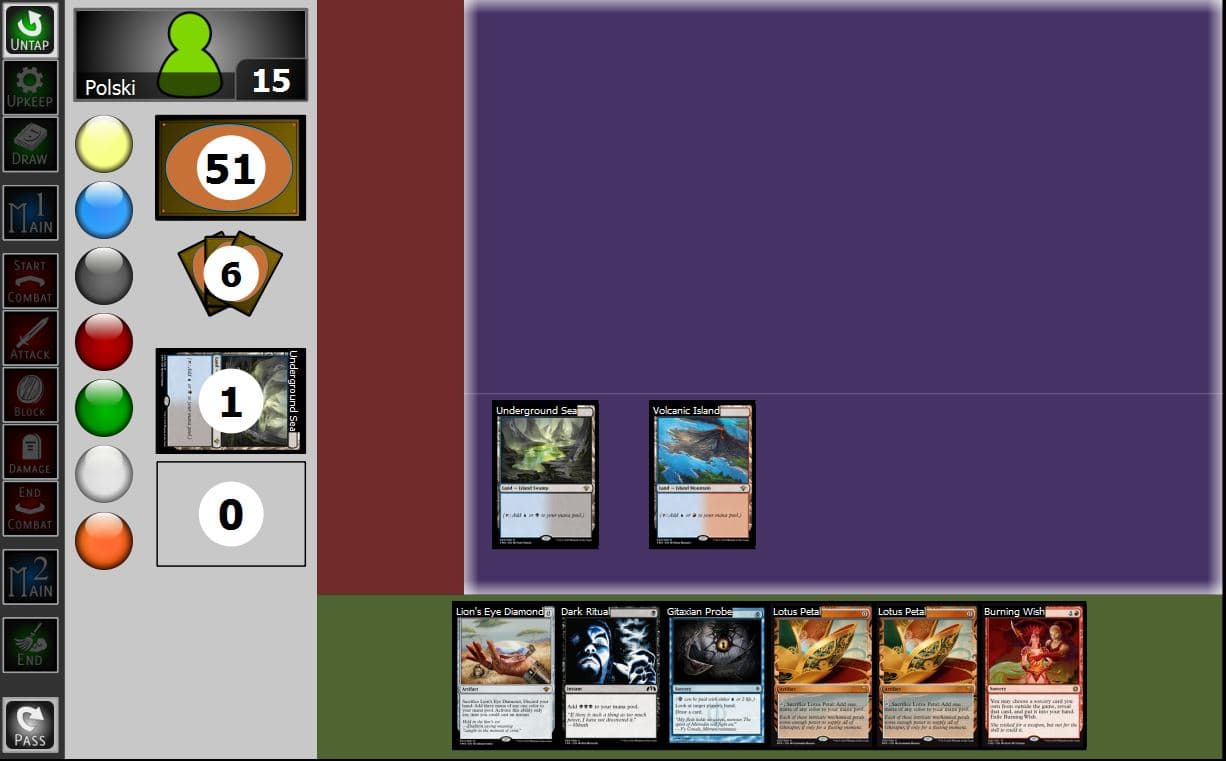 Now it’s time to think. I don’t have an Echoing Truth to bounce Pyrostatic Pillar or enough storm to natural Tendrils of Agony. He could also be holding a Force of Will or other random counters. As it currently sits, we can go for an Empty the Warrens and survive, and put us above 3 in fear of Lightning Bolt. Assuming we go for that line we would then need to consider casting Gitaxian Probe, which would cost 4 life just for the sake of storm. At this point I don’t know how valuable the information is because it’s now or never in my opinion. I think just sitting around and hoping the top of our deck is exactly what we need and hope they don’t get a better hand too is just a worse line. The opponent is at 18 from 2 fetchlands, so I decide to just go for it without using the Gitaxian Probe I cast all of my rituals then Burning Wish *fingers crossed no Force of Will* and opponent says “resolves”. GREAT! I cast Empty the Warrens and this puts me at 5 life with 12 goblins in play. My opponent untaps, draws his card, and then concedes.

To get everyone’s minds thinking a little more here’s some bonus content:

It’s game 3 on the draw. Opponent plays a land and passes.

I draw my card for the turn and I have a great hand. Turn 1 Ad Nauseam from 20 life off an Infernal Tutor, but I don’t have a discard spell or a cantrip, so none in sight. Opponent could easily have counterspells, but does waiting increase our chances of winning? What would you do?