Through the Looking Glass: Grixis Phoenix with Callum Smith 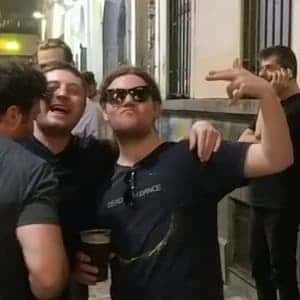 Hailing from the land of tea and fish & chips, Callum Smith or better known as “WhiteFaces” is usually playing some kind of Brainstorm deck and especially enjoys control strategies. He has an EU Eternal Weekend T8 to his name and hopes to one day rival fellow Through The Looking Glass guests with more than one FNM win.

What kind of disruption spells do you play in Grixis Phoenix?

Grixis Phoenix plays similarly to other Storm decks in regards to disruption, it’s predominantly discard based. You’ll see the full play-sets of Thoughtseize and Cabal Therapy in the main deck and sometimes one to two Daze, but outside of that, there are no copies of Force of Will or Spell Pierce to worry about game one. From the sideboard, two copies of either Spell Pierce or Flusterstorm are pretty common but it still leans heavily on the discard package to clear the way.

You’ll also sometimes see people board in Echoing Truth, either for Empty the Warrens or to bounce artifact mana to then take with discard.

How concerned are you about an early Empty the Warrens combo from your opponent, how does this differ between the play/draw?

Play/draw is a world of difference for Empty the Warrens. Arclight Phoenix is great at racing it, so for you to take an Empty the Warrens line you need to generally be on the play where a Buried Alive doesn’t kill you faster. It’s still possible on the draw too, usually where you deal yourself very little or no damage so you’re above eighteen life and the Goblins can kill in two hits. Unless it’s your only line available an Empty the Warrens for under ten Goblins isn’t advisable. Also, worth keeping in mind that if your hand is playing to an Empty the Warrens you might not want to cast Thoughtseize or crack two fetchlands, eighteen is that magic number of two swings from three Arclight Phoenix.

In general, you should be looking to avoid using Empty the Warrens I think, but it’s worth keeping one in the deck.

It has been up to debate on which deck is actually favored in the match-up, what is your stance on this?

It’s a bit of a crapshoot honestly and there’s not a lot of play to it. You’re both trying to combo each other faster and both have a glut of discard so it sometimes comes down to top-decks. While Grixis Phoenix doesn’t actually kill TES with its combo the chunk of life loss hurts your main engine (Ad Nauseam) pretty severely, so it’s not uncommon for TES to be able to “combo” but whiff. I would give the match-up slightly in The EPIC Storm’s (TES) favor since you have more tutors and faster mana.

If you play a turn one or two Cabal Therapy and your opponent responds with a Brainstorm, what would you name? This is assuming you know your opponent is on The EPIC Storm and you don’t know what’s in their hand.

I love these kinds of scenarios, Cabal Therapy versus Brainstorm is my favorite interaction in the format by a large margin. That said, there are so many variables to take into account for this name. If they know the match-up is a pretty key one, since if they do then it’s likely they would play out Lion’s Eye Diamond — that’s one of my preferred names in the dark. It’s the card that leads to the fastest kills thanks to both being the mana boost as well as an enabler for Infernal Tutor. Versus TES I usually prefer to go after mana rather than tutors since you run more of them, against ANT I usually name Infernal Tutor. If they do know the match-up then it boils down to either trying to hit a tutor or Dark Ritual and the rest of the context will depend on the speed of my hand. Mana if your hand is fast, or Infernal Tutor if it’s slower.

How effective do you think opposing discard spells are in the match-up?

Very. In the match-up, I’m siding out Young Pyromancers and am pretty all in on the Phoenix plan, with only four copies of Buried Alive it’s critical I find one quickly to have a shot at winning. While you do also want to try and maximize top-decks in these discard battles I think snagging Buried Alive is pretty key, it can buy you a lot of time if anything else.

What kind of countermagic do you play in your decklist?

As mentioned earlier you’ll sometimes see one or two Dazes in the main-deck but most builds are moving away from them to maximize the deck’s proactive nature and play a bit more removal for hate-bears. Then Flusterstorm and Spell Pierce are close to stock from the sideboard.

Aside from turn one wins, what kind of hands are hoping not to see from your TES opponent’s?

It’s really just those fast hands that I’m scared of. TES is a faster combo deck than Grixis Phoenix and it’s a race essentially. From my perspective, if I’m hit with a bunch of discard and the game goes a bit longer that gives me more time to find a Buried Alive. Importantly, Grixis Phoenix combos off very little resources, you can do it off two cards easily (cantrip into the missing piece of either Dark Ritual or Buried Alive) whereas TES needs a few more resources so the extra time lets me hit you with more discard spells to. So… the longer the game goes the more favored Grixis Phoenix is I think.

What does your ideal hand look like versus The EPIC Storm?

Similarly to what I’m scared of, I’m looking to combo you as fast as possible. If I can get multiple copies of Arclight Phoenix out on turn one your Ad Nauseam engine is neutered so significantly that it might be game-winning on the spot, I will always be enacting my combo over playing discard because of this. Outside of a very fast combo, I’m looking for a couple of pieces of discard and a Lotus Petal to give the mana boost needed to fight on a similar speed as TES.

What kind of answers do you play for Empty the Warrens?

There are Echoing Truth and Izzet Staticaster in a lot of Grixis Phoenix sideboards. I wouldn’t board in either specifically for Empty the Warrens, the best was to beat it is race it with Arclight Phoenix, but I tend to bring in some Echoing Truth simply because they’re better than some of the cards in the main deck.

With Storm decks usually playing out their artifacts in discard match-ups, do you value boarding in any artifact removal if you play any?

As mentioned in the last question, some Echoing Truth comes in because they have more utility than other cards in the main deck. It can pair nicely to hit artifact mana then Cabal Therapy them away especially.

What does your overall sideboarding look like for the match-up?

I’ll cut Young Pyromancer because they’re often too slow and then burn spells such as Lightning Bolt since they have very little utility which is 5-6 cards. I sideboard in 2 Flusterstorm/Spell Pierce, a copy of Surgical Extraction, and 2-3 Echoing Truth. Both Surgical Extraction and Echoing Truth aren’t great, but better than Young Pyromancer and Lightning Bolt since they can have a high ceiling.

How do you typically win through graveyard hate such as Tormod’s Crypt or Surgical Extraction? The reason I ask is that current The EPIC Storm decklists are typically playing two copies of Tormod’s Crypt.

Honestly, Tormod’s Crypt from TES wasn’t on my radar until you’ve asked this question. It’s a fantastic sideboard card in the match-up and makes boarding in some copies of Echoing Truth better since that will be the answer to it. Making Grixis Phoenix find the Echoing Truth and the time to cast it could easily win the match. Surgical Extraction can be discarded so it’s less scary.

What are your thoughts on alternate Arclight Phoenix decklists, such as the Doug McKay Storm version or other variants such as Esper or BUG?

There’s a lot of exploration still to be made with Arclight Phoenix, though I think this “stock” Grixis version is the best currently.

The Storm version by Doug McKay is the most interesting to me and probably the best of the other options, I’m excited to try it out myself. One of the early “breakthroughs” for Grixis Phoenix was establishing that Buried Alive for three copies of Arclight Phoenix was an appropriate power level for the format and an often game-winning play. This storm variant maximizes that and gives the Storm archetype a number of more lines too, I think there’s a huge amount of potential for this one.

The 4c/BUG one by David Raczka, I’m a lot less sure on. It’s doing some pretty weird stuff so I could be off, but I tested things like Land Grant, Manamorphose, Entomb, and Bloodghast early on and they massively underperformed. But I’d be happy to be proven wrong on this one, it’s a wild pile.

Esper is interesting. When I first built it initial results were pretty nuts and I was close to thinking it would break the format. In actuality, I was just running hot and after more testing, it was doing more powerful things than Grixis, but the additional mana tacked onto Monastery Mentor over Young Pyromancer made the world of difference and the plan B wasn’t as reliable as I’d hoped. It’s still a strong shell, but Grixis has proven to be better at this point.

BUG is a new one poking its head out. The idea is that Tarmogoyf is a better standalone threat than Young Pyromancer and you also get access to Leovold, Emissary of Trest which is powerful with fast mana like Lotus Petal as well as flexible removal in Assassin’s Trophy and Abrupt Decay. Max “Maxtortion” Gilmore has been the person spearheading this version so keep an eye out for him.

I would like to take a moment to thank Callum Smith for joining Through the Looking Glass and providing some spectacular responses on the Grixis Phoenix versus The EPIC Storm match-up.