Through the Looking Glass: Maverick with Dan Neeley 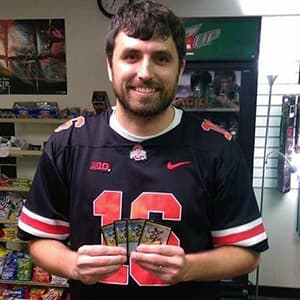 A few words on Dan Neeley (DNEELEY on MTGO, @danneeley1 on Twitter):

Dan Neeley is a legacy player known for being a Maverick and four-color Loam player. Dan has one SCG Legacy Open Top 8. Two MTGO Challenge Wins and other smaller achievements. Dan is a father of three beautiful girls, he enjoys playing Legacy in his spare time.

What suite of hate pieces does Maverick usually play for its Storm matchups?

In the main deck Maverick plays four copies Thalia, Guardian of Thraben and four copies of Green Sun’s Zenith. Green Sun’s Zenith will tutor for Gaddock Teeg and Scavenging Ooze. The main hate piece in the sideboard is Ethersworn Canonist. When playing the Green-White version, we typically play two copies of Chalice of the Void for turn one interaction, along with Surgical Extraction and Tormod’s Crypt. If you are playing against the black splash you will see three to four copies Thoughtseize and two copies of Zealous Persecution. New Cards like Plague Engineer and Collector Ouphe have also made their way to the sideboard. Choke is also a card that is played in the sideboard and is a card that comes in vs the Storm decks.

What does the ideal Maverick hand look like when playing against Storm?

Before sideboard the ideal seven would be: Two lands, one Noble Hierarch, two Thalia, Guardian of Thraben, and two Green Sun’s Zenith. But any hand with turn two Thalia, Guardian of Thraben or turn two Green Sun’s Zenith to tutor for Gaddock Teeg are as good as it gets in game one. After sideboard you are looking for the same thing, having a turn two hatebear along with a turn one Chalice of the Void or Surgical Extraction/Tormod’s Crypt. If the deck is playing the black splash, turn one Thoughtseize with a turn two hatebear.

How has Wrenn and Six affected Maverick as an archetype?

I believe Wrenn and Six heavily affects Maverick as an archetype. When playing games on the draw and they have a turn two Wrenn and Six, you are so far behind that it will be hard to come back. When you know you are playing vs Wrenn and Six, you need to lean heavily on your two or more toughness creatures like Stoneforge Mystic and Knight of the Reliquary as well as other permanents like Sylvan Library and equipment. I have found playing the black splash with main deck copies of Abrupt Decay helps with the Wrenn and Six decks. It also helps with Delver matchups, and I think Abrupt Decay will start seeing more and more play from Maverick.

A lot of Maverick lists seemingly cut Batterskull and sometimes even Stoneforge Mystic altogether, how has this affected the TES matchup in your opinion?

The normal Stoneforge Mystic package in Maverick is two copies of Stoneforge Mystic and two to three equipments. Typically the equipments are Sword of Fire and Ice, Umezawa’s Jitte and Sword of Light and Shadow. Batterskull does see play at times but isn’t the norm. But, when I have chosen to cut the package, it usually doesn’t open up slots to help Maverick in the TES matchup. You may see more cards like Tireless Tracker or Palace Jailer. I think the equipment are still good enough if the Maverick player makes it out of the early turns because of cards like Chain of Vapor and Echoing Truth are usually brought in against the Maverick player to deal with the hate pieces. Having a Sword of Fire and Ice on your creature typically requires the TES/ANT player to have more bounce/removal spells.

After locking up your Storm opponent with a hatebear, how would you typically close out the game?

Usually just attacking with that creature and adding additional creatures or equipment to try and close the game more quickly. Having a Mother of Runes to help protect your creature is the best way to soft lock your Storm opponent to consistently make sure you will keep that hatebear alive to close out the game. Wasteland and Choke help keep the Storm player’s resources low to make it difficult to play their spells efficiently alongside your hatebear.

What is your stance on the inclusion of the recently printed Collector Ouphe?

I believe it’s a great card to include as a one of in the sideboard. It’s another hate card to search for with Green Sun’s Zenith. Obviously it’s great in the Storm matchup but also has utility in many other matchups. Recently Bomberman has become a popular deck online and we may start seeing more decks that utilize fast mana starts with the new mulligan.

Green-White is typically the version that plays Chalice of the Void over the black splash playing Thoughtseize. They are both there for turn one interaction. I think the TES player’s hand dictates which card would impact the game more. I think seeing the hand with Thoughtseize gives you more information and is probably a stronger play in most circumstances.

What kind of answers do you play for Empty the Warrens? How much of a concern is that game plan for Maverick?

In the Green-White version I play no answers to a resolved Empty the Warrens and it’s because the color combination doesn’t allow it. You could play an Engineered Explosives but the card doesn’t synergize with the deck and doesn’t allow you to set the counters on three without Noble Hierarch involved. The black splash typically plays two Zealous Persecution and that may even switch to more copies of Plague Engineer. I think Empty the Warrens is always a concern, especially with TES. I believe you should always bring in your answers to it.

How would you compare your current Maverick deck list when playing against TES to some older deck lists that splashed black for cards like Thoughtseize and Zealous Persecution?

I would say overall playing the Green-White version is much worse vs TES. I think the older list with Thoughtseize and Zealous Persecution/Plague Engineer will be the new norm and mostly because I think the deck needs more turn one interaction with the new mulligan rule because people will continue to play combo decks.

How would you compare your combo matchups in general with other Thalia decks such as Death & Taxes, Loam, and Humans?

I think it matters which combo deck you are playing against, but overall I think Maverick is the best deck in the list above at fighting combo as a whole. Having four copies of Green Sun’s Zenith makes the deck very consistent and the tool box to select the right creature to help you in most situations.

How would you compare your TES match-up to your ANT matchup?

I think the TES matchup is worse because it typically combos faster than ANT. Every turn matters and if they give you more time you have the chance to play your spells.

How highly do you value graveyard hate from the sideboard for the TES matchup? Does this change with the recent addition of Echo of Eons?

I wouldn’t say I value graveyard hate highly in the TES matchup, but we don’t have the greatest configuration that the cards can do something at times that we would bring it in. With the recent addition of Echo of Eons I believe it matters more, but I think Maverick players are in the same spot and will bring their interaction with the graveyard in.

What does your sideboarding look like for the TES matchup?

My current sideboard is:

I would bring in all of my sideboard vs TES except for one copy of Choke and Vivien, Champion of the Wilds.

If TES or Storm in general were a larger percentage of the metagame, how would this affect your decklist and/or sideboard?

I mostly play on MTGO and Storm makes up a good percentage of the online meta. At times I run into Storm a lot. I would add the fourth copy of Thoughtseize if it became even more popular.

What other advice do you have for Storm pilots as well as Maverick pilots for the matchup?

Advice for Maverick pilots would be to mulligan aggressively to interaction. Stoneforge Mystic and Knight of the Reliquary hands aren’t good enough in this match up. Post-board always try to play around Massacre. Don’t get frustrated losing to turn one plays, only worry about things you can control.

I would like to take a moment to thank Dan Neeley for joining Through the Looking Glass and providing some spectacular responses on the Maverick versus The EPIC Storm match-up.