Over the last few weeks I’ve played in three large Legacy events, this has caused me to question some slots in the deck. Below you can find my thoughts on these questionable slots and possible directions to where The EPIC Storm should be going.

After playing ten miserable rounds of Eternal Weekend (every round went way over time in round and the event itself was way too long), I was looking at my match-ups and I realized I sided in Rending Volley exactly once and didn’t use it. I was unhappy with this slot for weeks, but was afraid of taking it out and being cold to a resolved Ethersworn Canonist from Miracles. I spent the last round of the event wondering the event site, watching matches, and thinking about the play mistake from the previous round which caused me to drop from the event.

When walking around the event site, I noticed that the top two performing Miracles pilots both had Counterbalance in their seventy-five and even if I had Rending Volley, it wouldn’t have been good. This caused me to reevaluate the six “answer” slots in my sideboard, at this point, Abrupt Decay started making more and more sense.

At this point, we’ve convinced ourselves that Abrupt Decay is worthwhile. The issue is the green splash isn’t easy to add with the mana-base from Eternal Weekend (v3.3). In order to play basic Island, we split the secondary fetch lands in a two and two count – with Bloodstained Mire and Scalding Tarn. The issue here is that Scalding Tarn doesn’t search for Bayou where Bloodstained Mire does, and conversely, Bloodstained Mire doesn’t find Tropical Island. Meaning, if we want to keep basic Island in the deck, you have to live with only six fetch lands that find your sole green source – that’s an issue. Alternatively, you could run both Bayou and Tropical Island in the sideboard, but I’m not a fan of giving away two sideboard slots to support something that isn’t completely necessary.

Well… where does that leave us? Cutting the basic Island is the answer. I was very hesitant at first as I’ve enjoyed the Island versus prison strategies as well as Delver of Secrets decks. After playing sixteen rounds of competitive Magic in Washington, DC I can say that I never once missed the Island being in the deck. Without cards like Echoing Truth or Perilous Voyage in the sideboard the need for the copy of the basic land diminishes. If you look at the match-up breakdown, I faced both prison decks and Delver of Secrets decks. With me beating both of the tempo decks I saw and losing twice to Eldrazi Aggro. The lost matches against Eldrazi weren’t anything to do with the sideboard changes, both times my opponents did what their deck does or had very good draws. It happens.

When looking at sideboard changes, I believe it’s crucial to look at how the cards impact match-ups. First, let’s look at Death & Taxes: With v3.3 you sided in six cards in this match, two copies of Echoing Truth, two copies of Perilous Voyage and the pair of Rending Volley. Pretty standard. Now with v3.4 you side in Bayou, three Abrupt Decay and the two copies of Chain of Vapor. You’re maintaining the same amount of slots, which is very nice. The Bayou provides an extra land for casting things through taxing effects, while rarely important is a something to consider. You actually lose one slot of being able to answer a creature based threat such as Thalia, Guardian of Thraben. I don’t see this as a major issue. Online I have 82 matches against Death & Taxes with 18 losses (78% win-rate) at least six of these (possibly more) are from sideboard copies of Chalice of the Void. You’re actually gaining a slot that deals with nuisance artifact (I’ve found Chalice of the Void often gets dropped for zero in this match-up). The obvious downside to v3.4 is that Abrupt Decay isn’t as easy to cast versus taxing effects paired with Wasteland. From my perspective, these are acceptable losses from a match-up that has an incredibly high win-rate.

Now, let’s take a peek at prison decks: Against decks such as Lands or Eldrazi you gain a sideboard slot since you now have five slots that deal with cards such as Chalice of the Void, Sphere of Resistance, or Thorn of Amethyst. Having Chain of Vapor for the taxing artifacts is a huge gain, it drastically can change the way these games play out as only needing two initial mana sources to answer something is a lot easier than three in a thirteen to possible fourteen land deck. Similarly to Death & Taxes, Wasteland can be an issue.

In talking to a few people, I’ve heard one thing repeatedly, “WHAT!? No Ground Seal?!” I like Ground Seal as a way to hose 4c Control/Pile, but there’s a few issues that I see. The first and most important is that sideboard space is tight, there just isn’t room unless you want to skim on the Empty the Warrens package which will hurt your numbers against the Delver of Secrets decks. The second has been, both online and at Eternal Weekend, 4c Control’s numbers have been going down. In both performance and percentage of the metagame, it’s difficult for me to dedicate slots to something that’s declining a bit. There’s also the fact that I have a 61% win-rate against the deck, while it’s not as terrific as the Death & Taxes matchup. I believe it’s acceptable.

I love Xantid Swarm. I really do, there was a time in my life in which I played four in the main deck. The issue is my favorite insect just is’t good in the metagame at the moment. With Hymn to Tourach and Cabal Therapy seeing as much play as they do, you’re taking the wrong way to combat these decks. It’s like hearing that it’s going to be icy outside during the winter and then wearing Tennis shoes to work, sometimes you won’t fall flat on your face and they’ll work to some extent – but there’s got to be something better.

Over the course of twenty-six rounds of competitive Magic: The Gathering at it’s finest, I never once used or wanted Telemin Performance. While I understand there’s more Storm combo online, it’s tough to justify the slot when its used as infrequent as it is. According to the spreadsheet, it’s used about 3% of the time. Which makes sense, as it’s completely dead in a bunch of match-ups. The downside of cutting a card like Telemin Performance is you lose a haymaker in matches like Lands and Storm (at least in game one) then against Reanimator and Sneak & Show. While I remain a fan of Telemin Performance, I think I’m going to shelf it for a little while and test something else in the mean time in it’s place.

“BURNING WISH FOR MASSACRE!” the twitch.tv chat box repeatedly screamed as I was losing. Some of the users realized I didn’t have it, but not all of them and honestly – I’m not convinced it’s worth it. Most of my losses against Death & Taxes, Massacre wouldn’t have saved me. Against a Thalia, Guardian of Thraben it’s an expensive out. Burning Wish will cost three and Massacre will cost one (assuming they have a Plains, they run a lot of non-Plains and sometimes won’t play them due to Massacre), four mana isn’t easy to accomplish against Wasteland and Rishadan Port. I’ve been playing without Massacre for months and for the most part, don’t miss it. I’ve changed my play to just not need the card, mulligan aggressively and keep hands with Cabal Therapy or win fast. I also have a tough time justifying a card slot for a 78% matchup. That said, that might be changing soon. Here’s why:

Monastery Mentor and Deathblade. Esper Mentor along with Miracles have been picking up in numbers, while Massacre isn’t always the perfect answer (their creatures can grow) it sometimes is. Being able to clear a few copies of Deathrite Shaman (Deathblade) off the table will buy a considerable amount of time, the same could be said for Monk tokens.

With the metagame shares of Plains being on the rise, a card like Massacre could be versatile enough to warrant play.

I’m honestly not sure what I want to do with the sideboard. I feel a few cards in the sideboard are “flex” spots, the first being the fourth copy of Empty the Warrens (you can get by with three), Cabal Therapy, and Telemin Performance. In the short-term, I’m likely to test Massacre. But something else I’ve had my eye on is to try sideboarding into “Ad Nauseam Tendrils” by playing a second copy of Past in Flames and a singleton Cabal Ritual (this opens up lines with Infernal Tutor and Past in Flames in hand). My concern with this plan is that a lot of people side into graveyard hate and then sideboarding into more graveyard resources may not be the best plan. I’d need to test it out just to make sure, but it could be good. Who knows?

Theoretically, if you’re still very concerned with 4c Control/Pile these could be your Ground Seal slots.

That’s it! I don’t have any large Legacy events on the horizon, so you can find me testing new things online and you can track these results by following on my spreadsheet. Oh yeah! I picked up these: 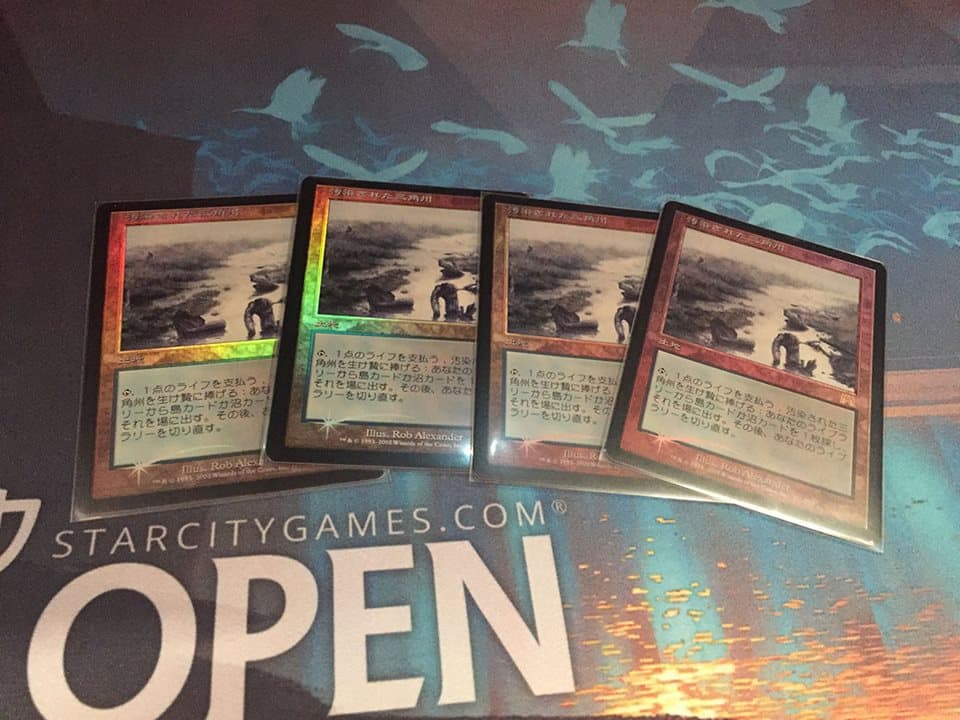 Bryant Cook has one Grand Prix Top 8 as well as nine Star City Games Top 8s (two wins). You can find Bryant's daily sweet Storm videos for every format on our YouTube Channel, including some recent videos featuring The EPIC Storm v12.4! Bryant is also a host of The Eternal Glory Podcast, as well as a Web Designer, New York Mets fan, and all-around nerd.