Through the Looking Glass: Lands with Jarvis Yu

Special thanks to Jarvis Yu for his contributions to today’s article.

Lands is a legacy mainstay that has grown in popularity over the last few years. Until recently, Lands was always seen as a free win for The Epic Storm, but as Lands players have gained access to more powerful lands such as Thespian’s Stage, the match-up has definitely seen a paradigm shift. The natural improvement of their other match-ups has meant more open slots in the sideboard for cards like Sphere of Resistance and Trinisphere, and the deck is built to make Marit Lage quicker than ever before. While Lands is still a deck any Storm player should be happy to sit across from, the nuances of the deck are important to understand. We’ve brought in Lands specialist Jarvis Yu to help us learn about the Storm versus Lands match-up from the other perspective, in order to better get a feeling for what they are trying to do against you when it isn’t as simple as casting Sphere of Resistance on Turn One. 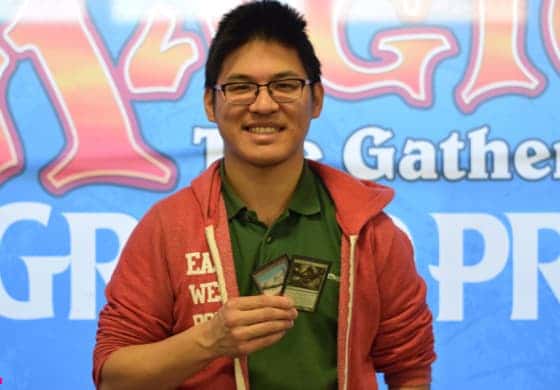 Jarvis Yu is an American Magic player. Known as a Legacy specialist and an advocate for the Lands strategy, having won Grand Prix Seattle-Tacoma 2015 with the deck as well as finishing 7th at Grand Prix Columbus the next year. He also has a third Grand Prix top eight, at GP New Jersey 2017. He was a Gold level Pro during the years of 2015-2017, and is currently a Silver level Pro. He strongly believes in the importance of playing every competitive format to learn ‘what matters’ in any given game of Magic.

What are your typical plans in game one once you realize that your opponent is playing The Epic Storm?

Go for a fast kill or try to deny them all of their lands. The latter is unlikely to work, but sometimes you don’t draw a hand that’s capable of assembling the ‘combo’ aspect quite fast enough.

How concerned are you when it comes to Empty the Warrens on average in game one?

Not very. The Tabernacle at Pendrell Vale and Glacial Chasm solve it completely, and it’s fairly easy to find one of those via Crop Rotation or Gamble.

What is your general sideboard plan? What cards in your deck are you looking to take out?

I will take out most cards (Punishing Fire / Maze of Ith / Glacial Chasm) that interact with creatures, although I may leave in the The Tabernacle at Pendrell Vale if I judge that my opponent is likely to leave in Empty the Warrens.

What hands are you looking to keep/mulligan for post-board? Do you mulligan aggressively for a Gamble/Sphere of Resistance, or is a quick Marit Lage good enough?

I’ll mulligan marginal sevens pretty aggressively, but ever since the Vancouver mulligan rule was implemented, I’ll keep 6 card hands that are missing just one piece. (This is a general heuristic that I apply to almost every format now, for what it’s worth.)

How aggressively do you go all-in on a Marit Lage knowing that your opponent might have boarded in bounce spells?

Very aggressively. Life from the Loam allows me to reassemble it very quickly, so I tend to just try to kill them, especially since I don’t think waiting to make the token actually favors me in the matchup.

Does the value of Empty the Warrens change once you have sideboarded?

Again, it depends on how I judge my opponent valuing Empty the Warrens.

Do you think that Telemin Performance is generally a liability post-board given the advent of Tireless Tracker?

Yes, and there’s enough bad cards to take out for Lands that Tireless Tracker is a good option.

This is a difficult question to answer, because it would require me to see their hand at all possible points. The biggest mistake from the Lands side is not being aggressive enough.

How much of an impact do you think the basic lands make if your Storm opponent is playing them in their deck? Are they game-changing or do they often not make a difference?

How do you think The Epic Storm matchup compares to other combo decks such as Ad Nauseam Tendrils or Sneak & Show?

It’s similar, but the lack of reliance on Past in Flames (if you don’t want to rely on it) and the additional cheap rituals (Rite of Flame) likely make this version of Storm better in the matchup. I think Sneak & Show is a harder matchup than the Epic Storm is for Lands, though.

Any other interesting wisdom to share about the matchup? Any tips and tricks for either side?

If you decide to go for Empty the Warrens in game 1, try to use Cabal Therapy to clear out all copies of Crop Rotation or Gamble.

Often the centerpiece of the matchup (post-sideboard): you have to decide between trying to get another lock piece into play or passing and attempting to make Marit Lage, and that is a difficult decision, that I don’t have a simple heuristic for.

For more information on the Lands versus TES matchup see these resources:

AJ is an Options Trader by day, and a long-time EPIC Storm enthusiast by night. When he isn't busy, AJ is watching Twitch, jamming out to Taylor Swift, or beating StarCityGames grinders on camera with Empty the Warrens.