Ad Nauseam Tendrils (ANT) is a combo deck that focuses on breaking the Storm mechanic to cast a game-winning Tendrils of Agony. This is done by combining mana rituals, tutors, and engines, such as Past in Flames and Ad Nauseam, to cast 10 spells in a single turn. Because ANT is a black-based deck and plays a card like Lion’s Eye Diamond, it uses discard spells as its primary form of disruption. Counterspells are less good at protection during your combo turn if you have to discard your hand.

Storm has had success for many years in many different flavors including ANT, The EPIC Storm (TES), High Tide, Goblin Charbelcher, and many more. ANT is by far the most popular version, though, and I’m honestly not sure why. I don’t foresee this deck going anywhere, and its proven to hold its weight throughout many legacy metagames. When preparing for a legacy tournament, ANT should be on your list of decks to have a plan for.

How does ANT matchup against TES?

Thoughtseize and Duress – ANT plays a very similar disruption suite as previous TES lists. One of the trickier aspects of discard spells in combo vs. combo matchups is knowing when to use your discard spells to either slow your opponent’s combo down or remove their disruptive elements to your combo. These decisions are what often leads to winning or losing the game. Since TES is the faster combo deck, ANT will be trying to slow us down. They don’t mind playing a longer and slower game.

Past in Flames and Ad Nauseam – Like mentioned above, ANT wouldn’t mind getting into a discard war, and that is due mainly to Past in Flames. It is not only pretty resilient to discard spells, but it also helps ANT recover from all of their other cards being discarded. They can combo from very few resources in hand with Past in Flames. That is also true with Ad Nauseam. When combined with a Cabal Ritual, ANT can combo off with much fewer resources than TES.

Flusterstorm, Daze, and Veil of Summer – Over the past several years, ANT has been playing Flusterstorm in the sideboard to help beat other combo decks. Obviously, this will be brought in against TES and will cause blowouts because you typically don’t think of a Storm deck having counterspells. In general, other combo decks will go for it as soon as possible against Storm decks because the typical disruption is only sorcery speed. Flusterstorm has changed that. This mindset has led to some ANT players also trying out Daze and hoping to counter other crucial cards like Chalice of the Void, Thalia, Guardian of Thraben, or other important cards. Usually, Daze isn’t that great vs. Storm, but that’s because we are expecting it out of Delver of Secrets decks, not storm mirrors. Veil of Summer is a brand new card that everyone realizes is powerful and has popped up in Storm decks of late. In this matchup, it can counter our discard spells, and give them the opponent hexproof from Tendrils of Agony.

The key to winning this matchup is to go fast. Like in most other combo matchups, it often comes down to racing. We aren’t going to have as many of the tools of disruption as ANT will have. We can’t stop them from comboing off as well as they can. The more turns we play the less likely TES is to win. This is most prevelant when evaluating our opening hand. If our hand has lots of cantrips and lands, it’s likely too slow here. We are looking for hands that win on the first or second turn, and if it has some discard, then even better. When using our discard spells, I try to evaluate if my opponent’s hand is faster. If so, then take whatever slows them down the most. If not, then take any of their discard spells so they can’t slow us down. It all comes down to speed.

Empty the Warrens is certainly the worst card in the deck. Winning with it would require a combo turn plus usually two additional turns to attack. That’s asking a lot out of an opponent that can kill us on the first or second turn of the game. Defense Grid is also pretty terrible. Yes, the opponent can have several counterspells post-board, but they also have discard spells. It is quite slow and doesn’t stop the opponent from comboing off. We generally want our disruptive elements to both prevent the opponent from combing and protect us. That’s where Hope of Ghirapur and the Duress comes in. While Hope of Ghirapur isn’t the best card in the matchup, it is slightly better than the cards we bring out. It can protect us from their counters and if we need to, “Silence” the opponent to get an additional turn.

My opponent wins the die roll and we both keep our opening hands. In this list, I ended up testing with a copy of Cabal Ritual just to it try out. They start the game off with a land and a Lotus Petal to cast an Infernal Tutor. They then reveal a copy of Lion’s Eye Diamond to grab another one. To me, this is very scary because now they have a lot of mana, implying that they have another tutor or Past in Flames in their hand. 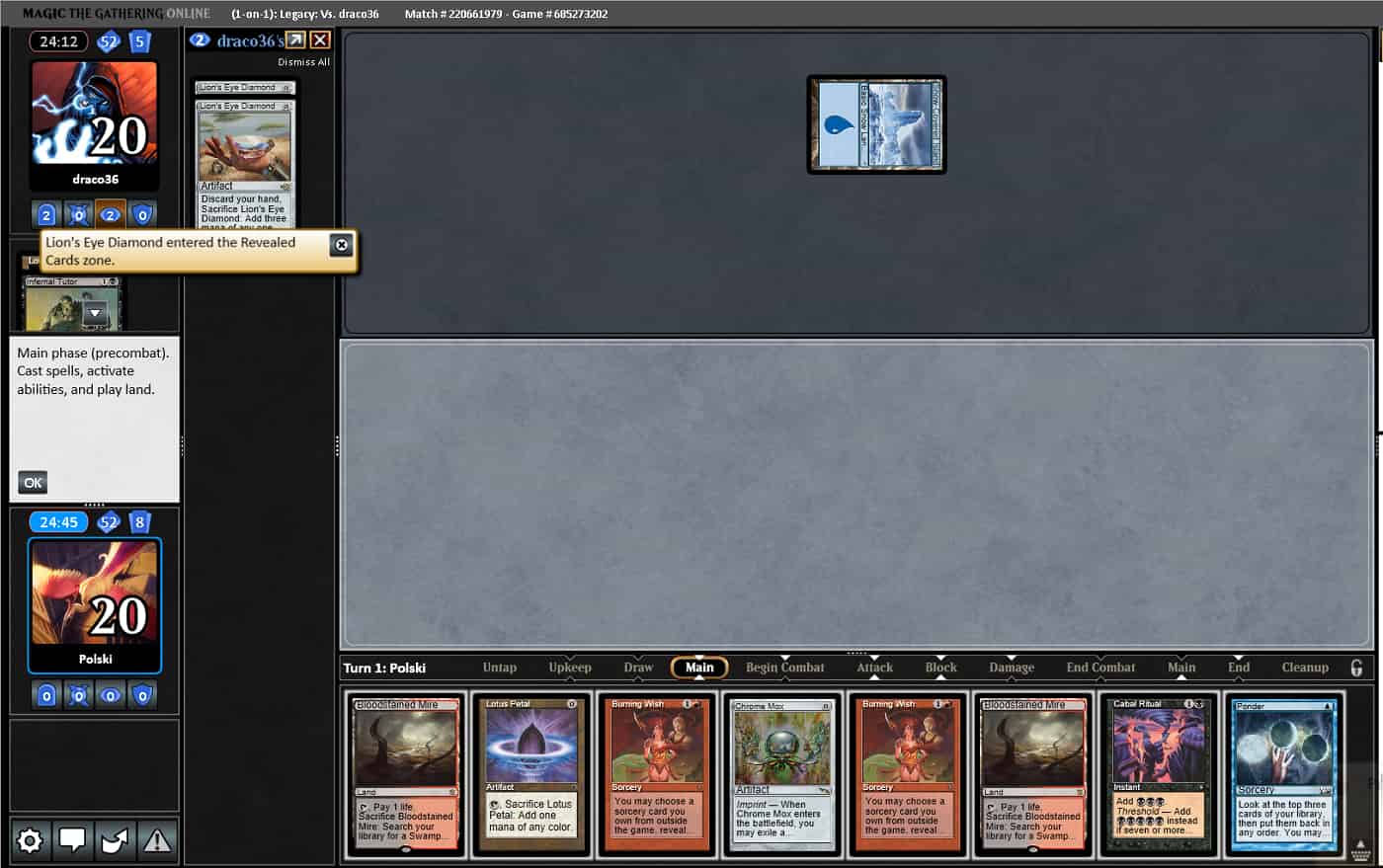 On my first turn, I just play my land and cast the Ponder. I am hoping to either find a discard spell or a way to win on my next turn. Either way, I need to hope I have a second turn. Unfortunately, it doesn’t even resolve as it was met with a Daze. I really wasn’t expecting that to be honest because not all lists play Daze. Additionally, I wouldn’t expect Ponder to be worth countering. 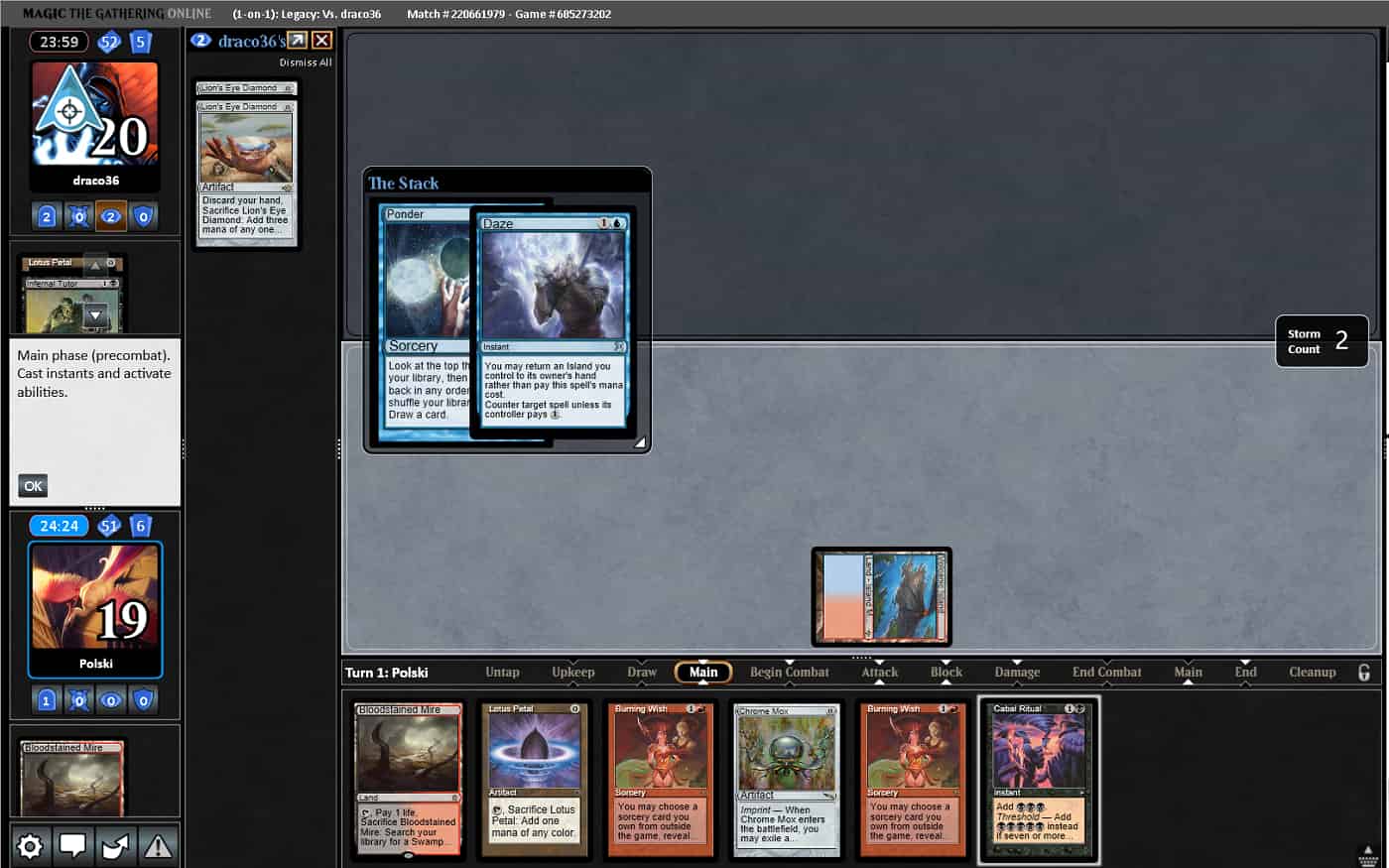 I just pass the turn back to my opponent and cross my fingers I get another turn.

Just as predicted, they had the second Infernal Tutor, and combined with both copies of Lion’s Eye Diamond, they could search for Ad Nauseam and cast it. They did just that which was enough to win the first game. 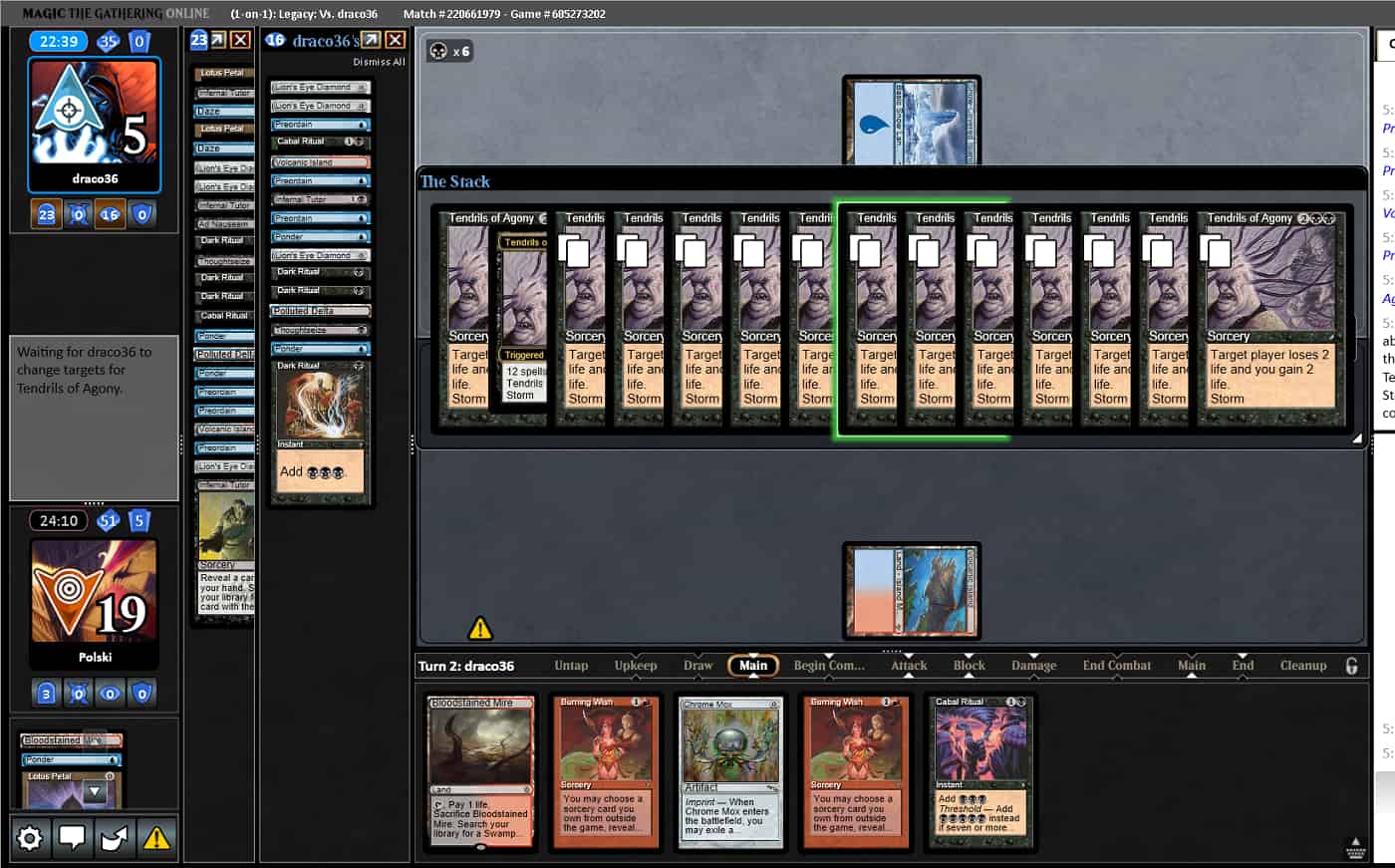 I sideboard like I previously mentioned, and took the play for the second game. My opening hand was six lands, so I mulligan. My six cards were much better, but I still needed a little help, though it was pretty resilient to discard spells. I had all the mana I needed and was looking for a tutor effect and possibly a discard spell. 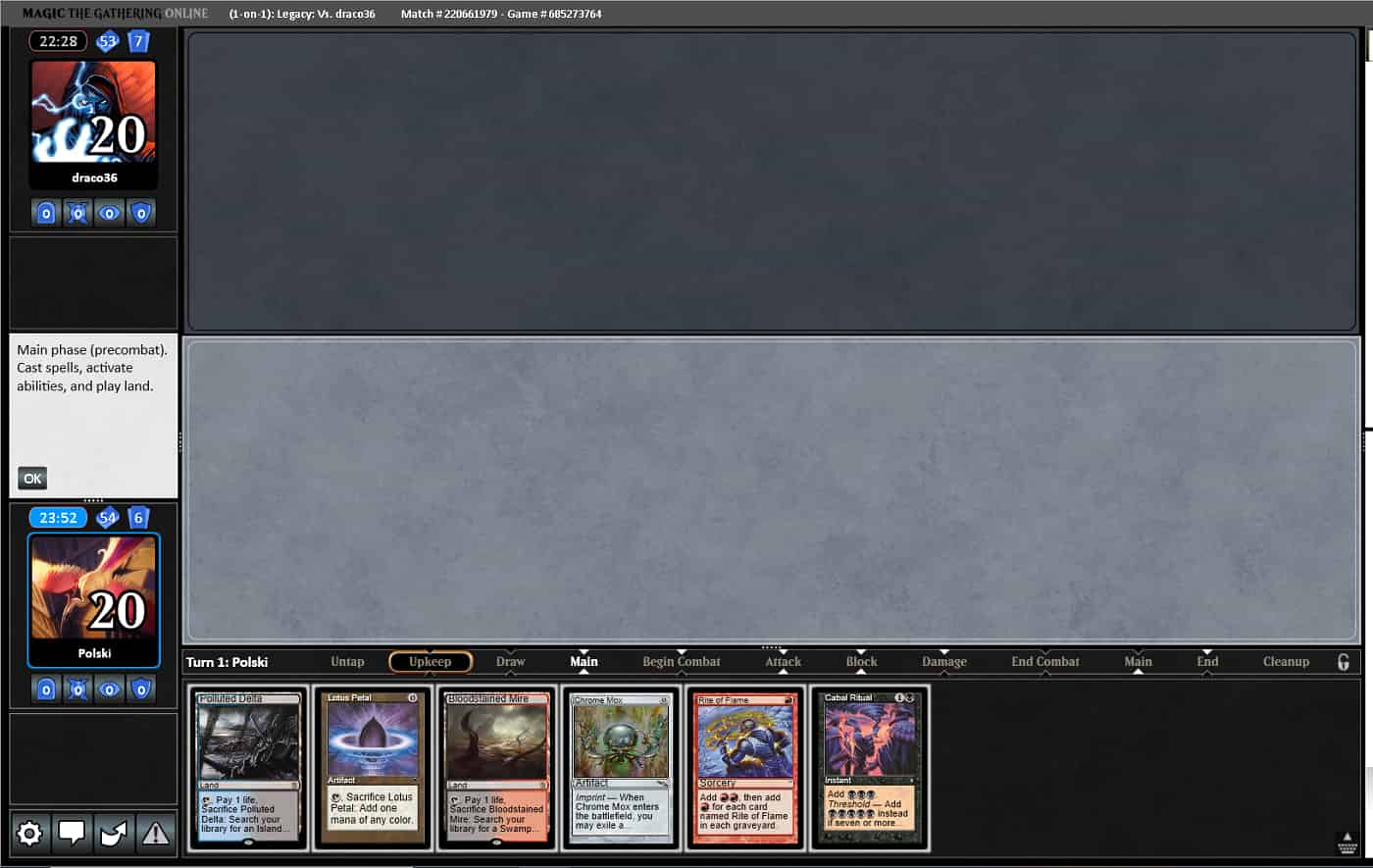 I played my land and passed. On my opponent’s first turn, they played a Tropical Island and a Ponder. After it resolved, they cast a Lotus Petal and passed the turn back to me. This caused me to raise an eyebrow. Why would they cast the Lotus Petal? Is it because they want to protect it from a discard spell? I highly doubted it. Their play screamed Veil of Summer or Flusterstorm. The fact I needed both a tutor and a discard spell to win the game now made my likelihood of winning decrease . For my turn, I drew Ponder and cast it. The top three cards were not bad. 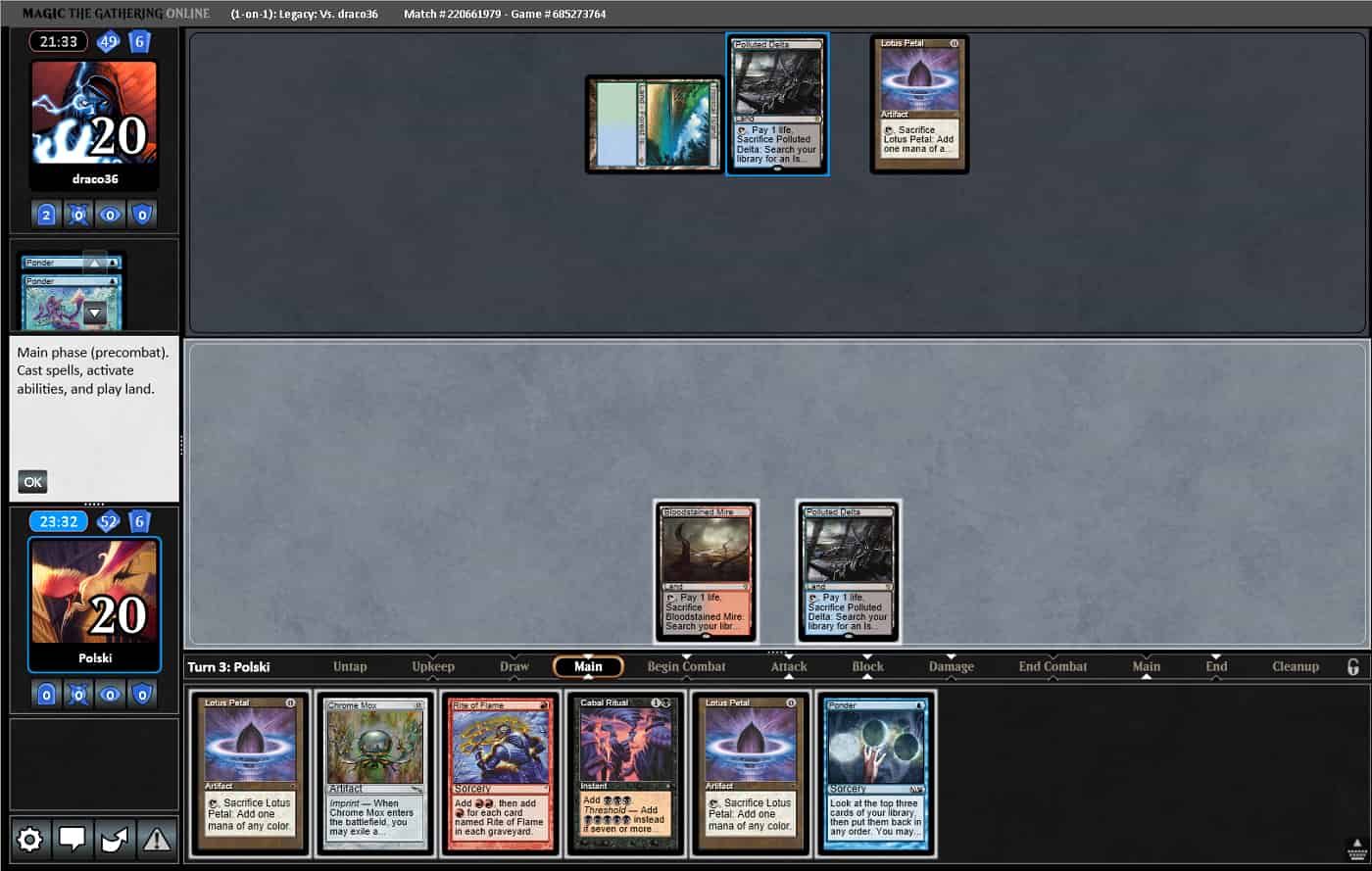 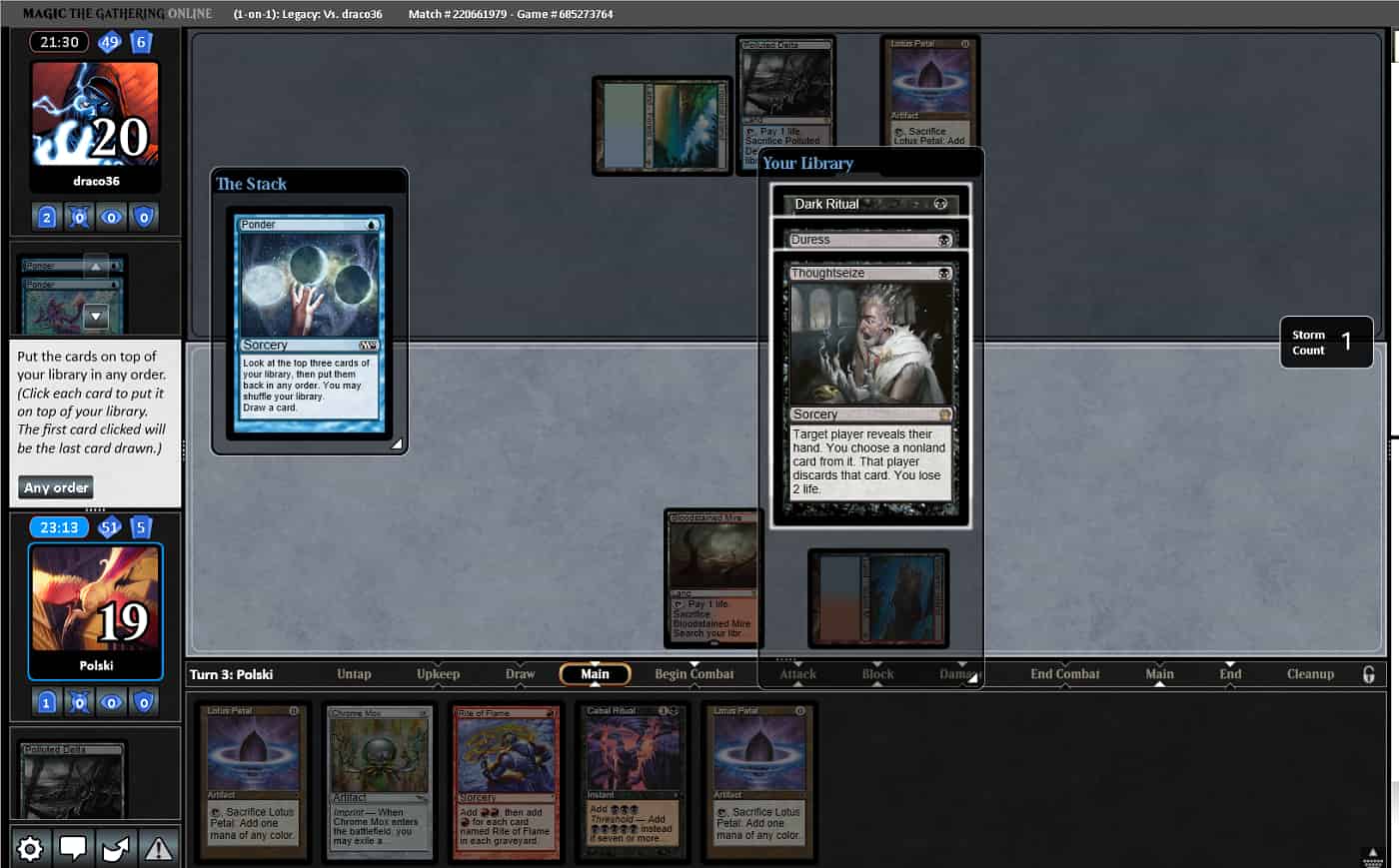 This was tough one for me. I knew I needed discard spell to win the game, but I also needed a tutor. The problem here is if I took the discard spell and cast it, I can’t take both the counter and something to prevent them from comboing off. I chose to shuffle to find a tutor. I shuffled and drew a Burning Wish! I just needed to cross my fingers I ddn’t die next turn and find a discard spell on my following turn. Unfortunately, when I passed back my opponent did have the kill in hand. The one good thing from this game was that I predicted correctly that the opponent had a Veil of Summer in hand. 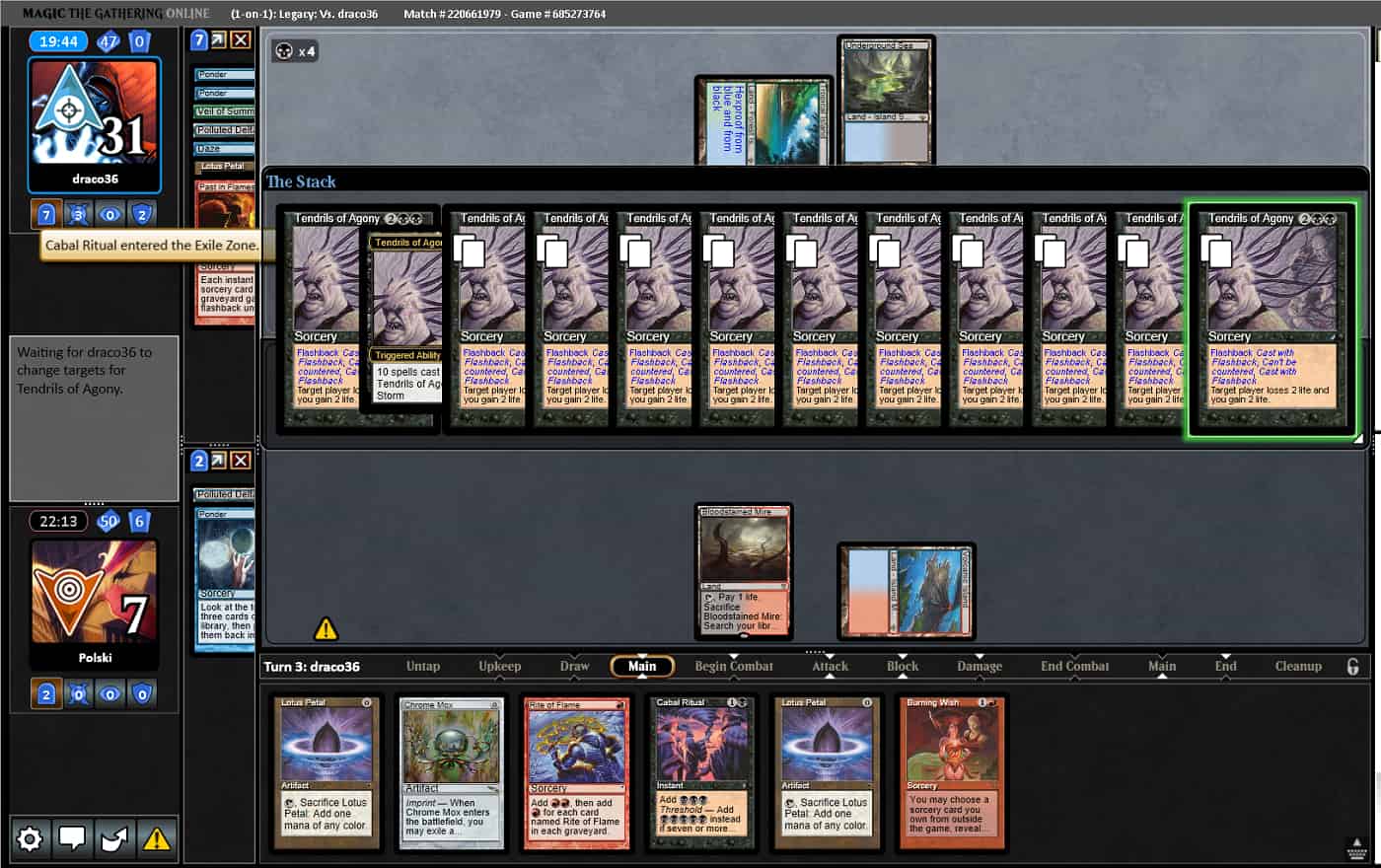 Obviously, looking back, I could have not shuffled off my Ponder to take a discard spell to “prevent” them from comboing off. That line wouldn’t have worked in the face of the Veil of Summer, however. I was stuck between a rock and a hard place.

Veil of Summer definitely adds a new dynamic to how Storm plays with and against it. It’s definitely something that is possibly playable for both ANT and maybe even for TES. The card is definitely very powerful, but will it end up being a staple in Storm decks? Time will tell! Until next time, no matter which Storm deck you choose to play, I wish you the best of luck in your own testing!