Grixis Phoenix is the new kid on the block, as far as Legacy decks go. This is due to the recent printing of Arclight Phoenix. The reason this card is legacy playable is because of an older card, Buried Alive. Being able to cast a couple of spells and then a Buried Alive to retrieve 3 copies of Arclight Phoenix putting them into your graveyard and then immediately into play, to put serious pressure on the opponent. Sounds like a combo deck, but unlike other combo decks, this deck doesn’t dedicate the rest of their deck to execute it. They can play out similarly to a more traditional Grixis deck, but also with a combo that can come out of nowhere. This is fairly unique to legacy because most decks are either fair decks or a combo deck, rarely both. Grixis Phoenix has only been around for a short while, but I’ve been running into it a fair amount in paper and on Magic Online, and it is putting up positive results. If this keeps happening Grixis Phoenix may be here to stay, and we need to be prepared.

How does Grixis Phoenix matchup against TES?

Arclight Phoenix, Buried Alive, Dark Ritual – These combinations of cards are where this new deck idea came from. The point of this deck is to cast multiple instant and sorcery cards and then a Buried Alive, to put three copies of Arclight Phoenix in the graveyard, and then immediately into play to really pressure the opponent. Dark Ritual is great for this deck allowing you to cast multiple spells a turn in the very early turns of the game. This gives Grixis a way to be very aggressive at trying to end the game and dealing lots of damage quickly. When playing against Grixis we envision the freedom to keep slower hands, but that is no longer the case against Grixis Phoenix.

Thoughtseize, Cabal Therapy – Traditional Grixis Delver or control variants have a good mix and balance between counterspells and discard spells. They do this to be able to play a higher card quality and to play the best of both worlds of being balanced. Grixis Phoenix, however, has opted to drop most of the counterspells in favor of more discard. This is to increase the number of cards that can be played on their own turn to try to hit that three instant or sorceries on your turn to bring back Arclight Phoenix. Counters can be harder to do that because it relies on your opponent playing something on your turn to be able to counter. Discard spells also work better with Dark Ritual, which helps power out Buried Alive. This is definitely worse for us storm players because discard happens to be better against us since it slows us down, deprives our resources, and we can’t use something like Hope of Ghirapur to fight it.

Young Pyromancer – This is the plan B. The deck is called Grixis Phoenix for a reason, Arclight Phoenix is the main goal, but you don’t draw Buried Alive every game. There needs to be another way to win the game and this is where Young Pyromancer comes into play. This allows the deck to play out like a more traditional Grxis control deck utilizing all of their spells to generate value and disrupt the opponent while making 1/1’s. Unforuntaley for us, Young Pyromancer is a great counter to Empty the Warrens. Being able to provide a team of 1/1s to match our tokens making Empty the Warrens a liability to try to win the game. Empty the Warrens already wasn’t very good due to Arclight Phoenix being able to race it effectively a lot of the time, but Young Pyromancer definitely adds to that liability.

Approaching this matchup will be unlike any other legacy deck. Its uniqueness of being able to play a fair game with discard spells, cantrips, and Young Pyromancer, but also has the potential to combo using Buried Alive and Arclight Phoenix. This makes it incredibly difficult to understand our role in the game if we have to be aggressive and race them, or be more defensive and try to be disruptive by using discard spells to interact with their combo. This matchup often comes down with who is more familiar with the matchup and assessing their role. This gives the Phoenix player a huge edge because they are going to be more familiar with playing against Storm than we will be against a brand new deck.

With both players interacting with discard spells, the game can really slow down from neither player having the resources to win the game quickly. Both Storm and Grixis Phoenix rely on playing numerous spells a turn to achieve their combo and that can be hard to do in the first couple turns of the game if discard spells are resolving. Because of this, the key turns of the matchup are going to be 3-4. By this point of the game, the dust is settling and both players will be done filtering with cantrips and disrupting the opponent, and usually whoever has the best resources left and found their missing combo pieces will win the game. The good news about us Storm players is that we also the potential of turn 1 or 2 kills. This is where we get a little edge in the matchup because the opponent doesn’t have this angle. Even if they put several 3/2’s into play early it doesn’t just end the game. In order to win this matchup always be conscious of where you stand. Is your hand suited to combo off quickly before the opponent? Then prioritize cantrips and going for the win. Are you behind with a slower hand? Then prioritize using discard spells to buy yourself that time.

When thinking about this matchup in games two and three, there is one obvious cut to me, Empty the Warrens. It’s rarely going to be good outside of turn one or maybe turn two because of Arclight Phoenix being able to race, and Young Pyromancer is able to make enough blockers. If there’s a scenario where it still is good then we have access to it through Burning Wish. Another cut here is Thoughtseize. This was a harder decision to make because it’s not as obvious. Thoughtseize is one of those cards that’s good to trim in matchups like this where the opponent is also trying to interact with discard spells because we need as many resources as possible to be able to combo off and we aren’t trying to play the control game. This can often come down to a race and we don’t want to be slowing ourselves down or taking excess damage. We also need to make room for Echoing Truth. Being able to bounce Arclight Phoenix is back breaking. They could have used all of their resources to get them into play and resetting that will slow down the opponent by several turns. Another side use case is also against Young Pyromancer. Empty the Warrens becomes a little better knowing we can bounce blockers. It can also buy us time just like against Arclight Phoenix.

I am on the play and have to mulligan while my opponent kept their opening seven. On my second turn, I am missing a land, but I have the option of casting a Brainstorm to look for one. 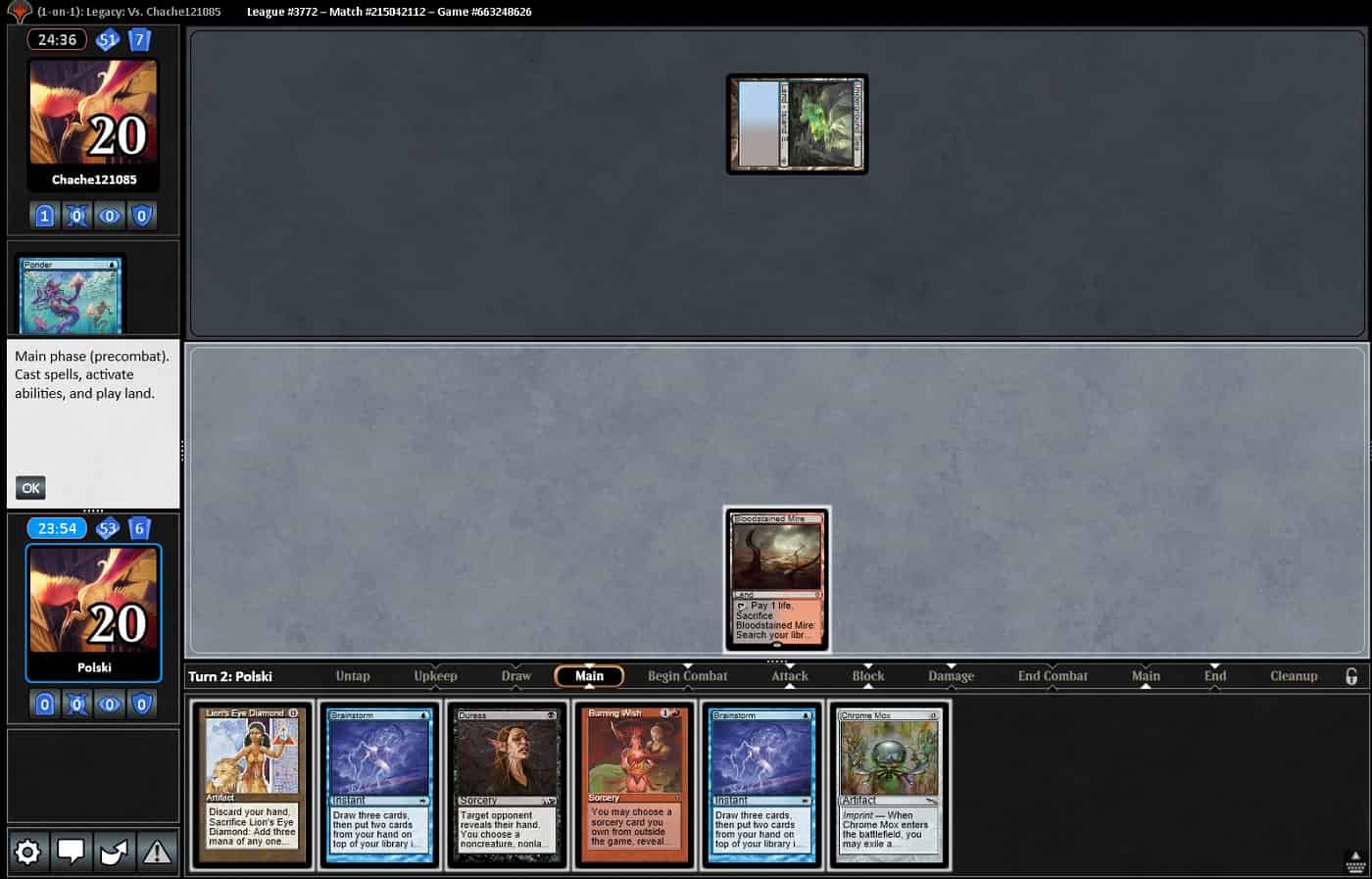 That’s what I choose to do, and thankfully I hit one! I put back the Chrome Mox and shuffle it away because it was my worst card, and then cast Duress to try to take any discard spell to protect my hand. I want to try to combo off within the next turn or two. Unfortunately, it was met with a Daze. 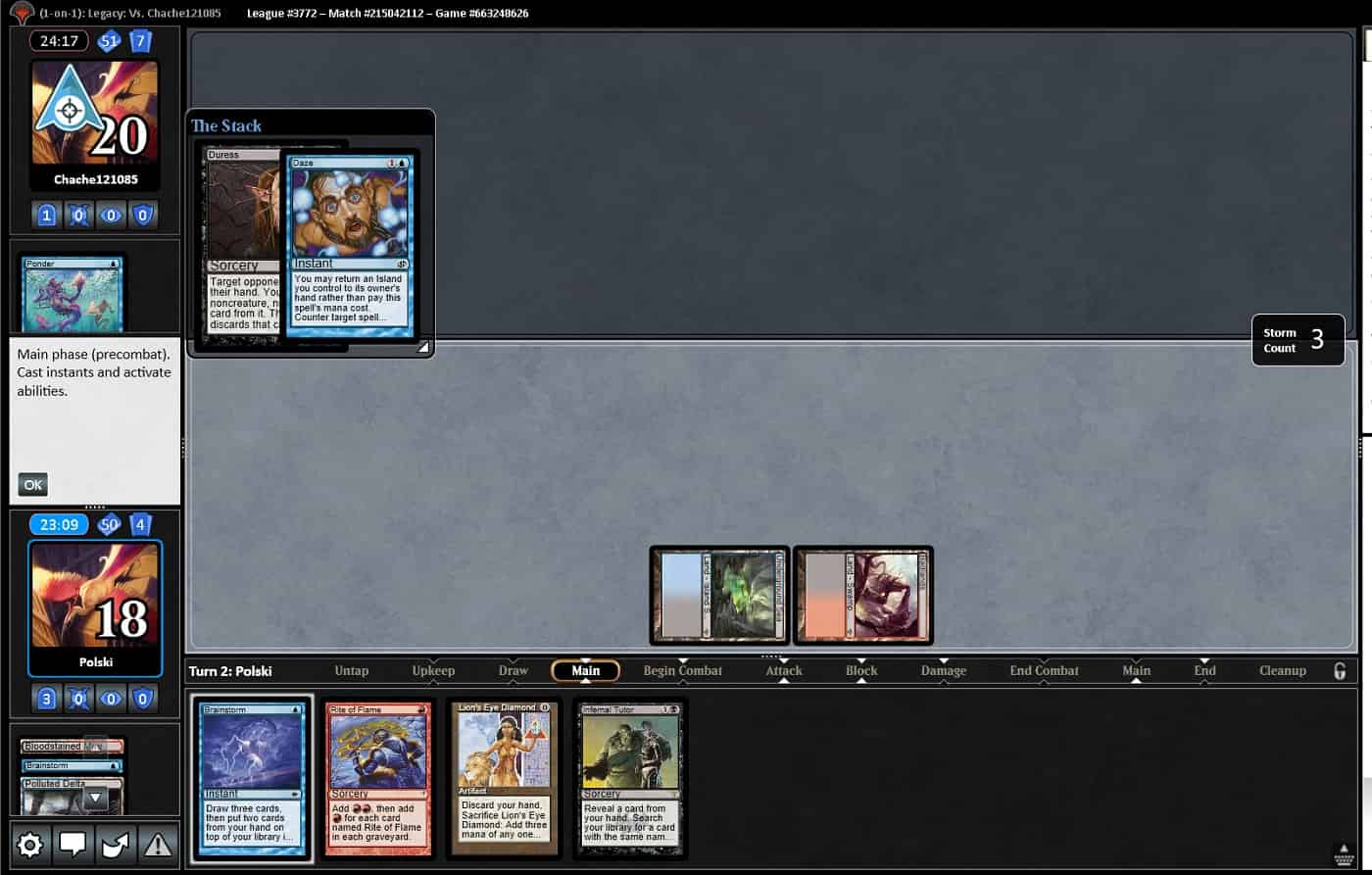 On my opponent’s second turn they played a different land, a Wasteland, and immediately taking me back down to one land. Thankfully, on my next turn, I drew another land and immediately decided to go for Empty the Warrens here. The opponent had no lands, doesn’t have Force of Will in their deck, and was very far away from being able to get to Arclight Phoenix or Young Pyromancer to make tokens. I was also pretty scared about an opponent’s discard spell on the following turn. 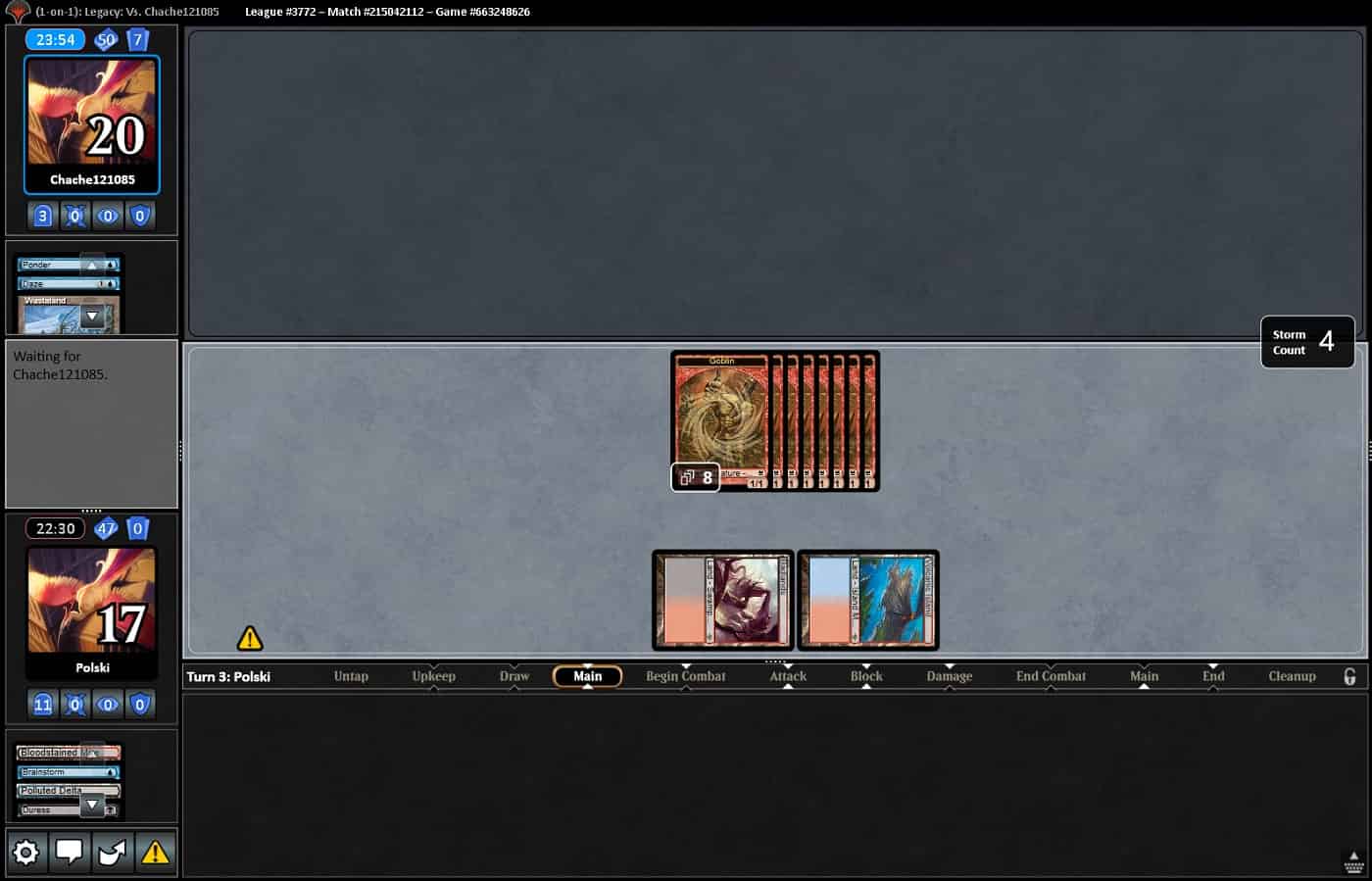 I don’t think 8 goblins is great in this matchup, but because of how far my opponent was behind on board I thought it could get there.

After a couple of draw steps from each of us, I end up finding a Burning Wish for Tendrils of Agony in case they stabilize or something weird happens. A couple cantrips later and the opponent concedes. 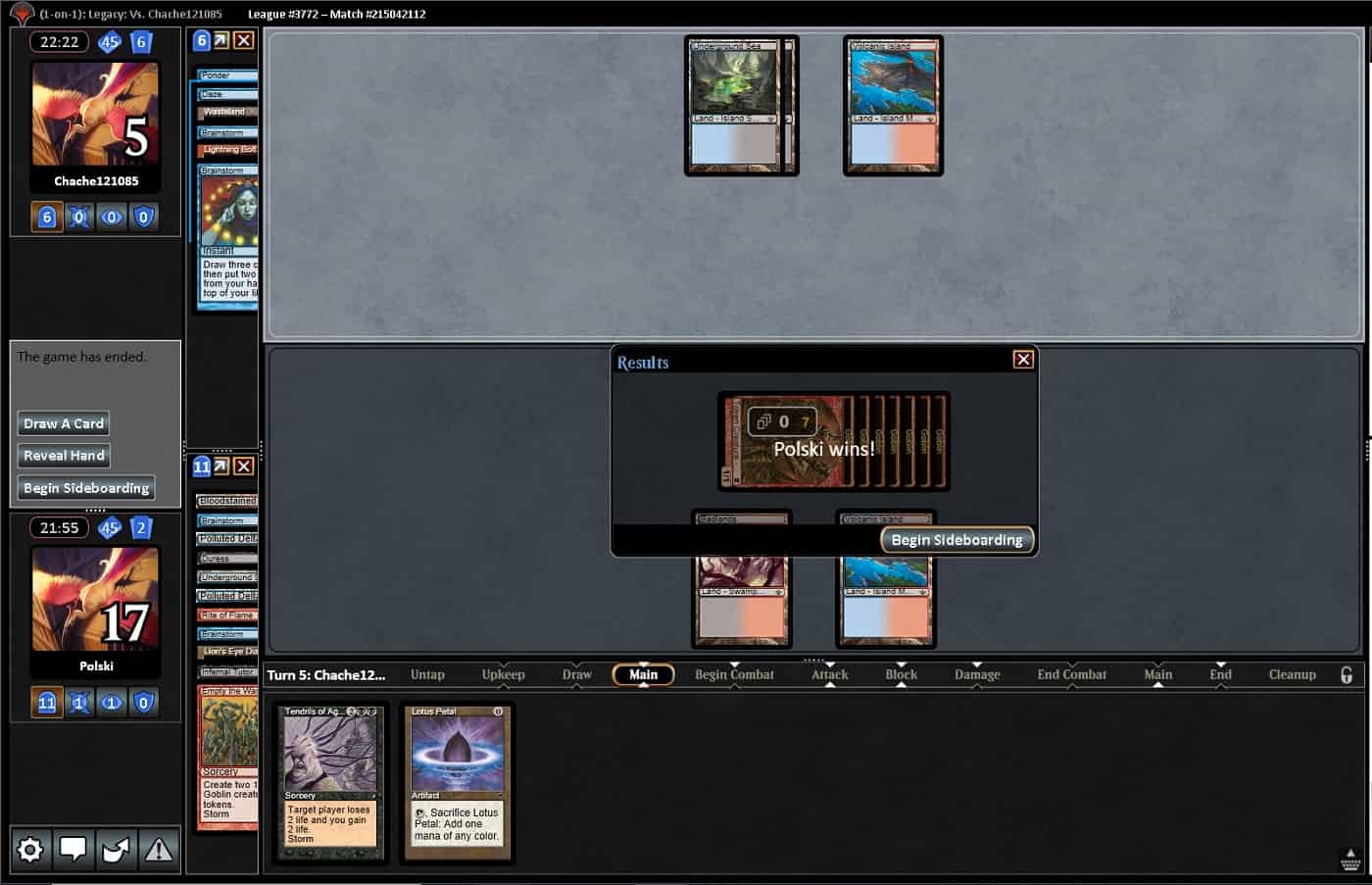 The second game became a little more grindy and lasted several more turns. There were discard spells, counters, Wasteland, and even Grafdigger’s Cage showed up. The opponent seemed to have drawn all of their interactive cards and nothing to be proactive. I eventually am able to resolve an Ad Nauseam from a high life total. 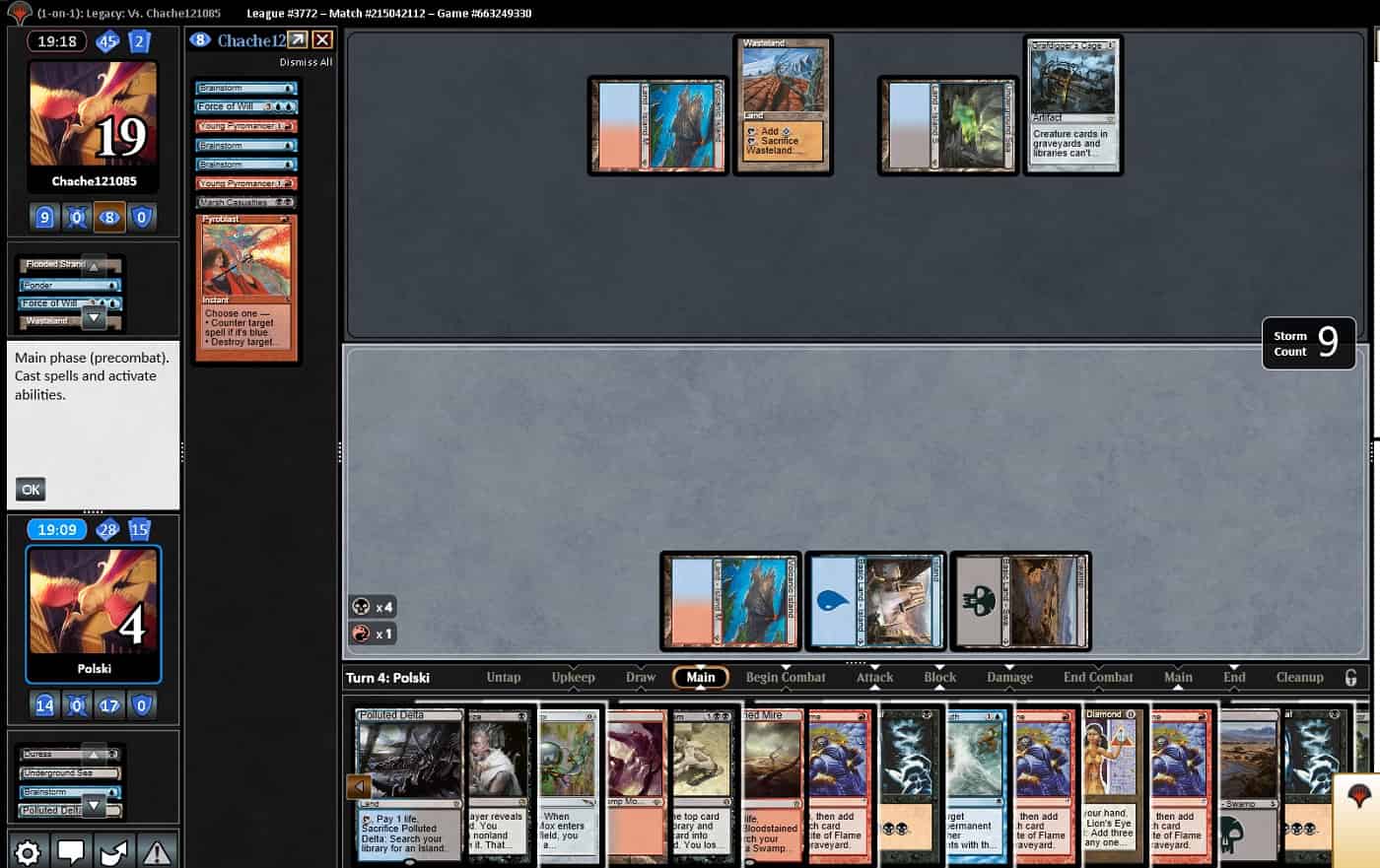 From here, it was looking rough. I had far more than enough mana and rituals, I just needed a tutor effect. At six life I flipped again and saw my life total drop to four as I hit an Infernal Tutor and that was the game! I was able to play out all of my rituals and a Lion’s Eye Diamond. I followed that up with an Infernal Tutor, holding priority and then sacrificed the Lion’s Eye Diamond, to get hellbent. I searched up a Burning Wish to tutor for the copy of Tendrils of Agony in my sideboard. Once I put Tendrils of Agony on the stack the opponent quickly conceded. 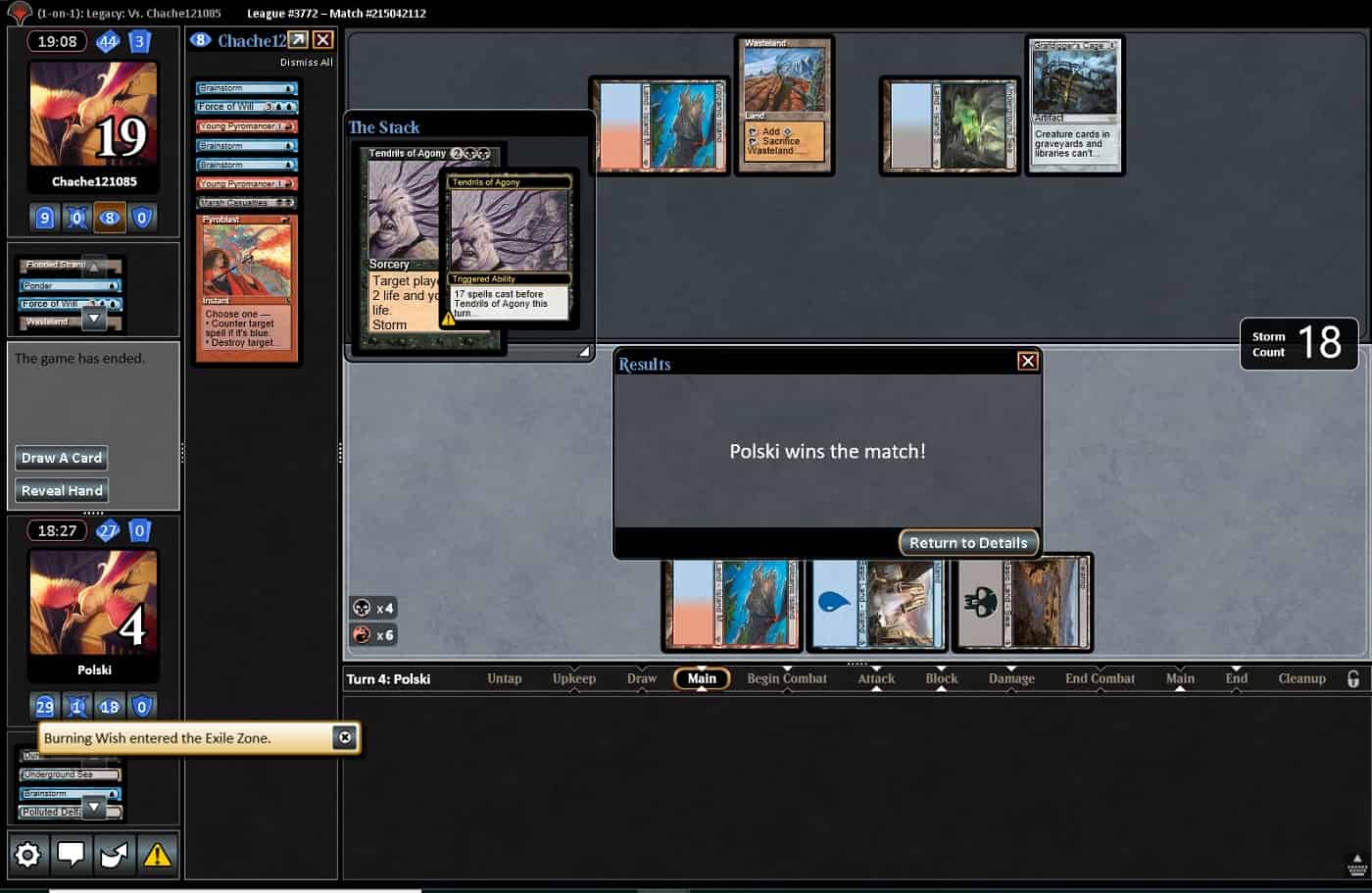 Evaluating and preparing for this new Grixis Phoenix menace has been quite challenging. There have also been so many variations of the deck and it is still being explored. The version in the example was a little different than what is becoming standard, but that’s part of the adventure in testing. We can’t always assume the opponent is playing a stock list. We always need to be on our toes of what cards the opponent could be playing, and this example showed a bit of that.

One of the great things about Legacy is that new decks or styles of decks pop up all of the time with printings of new cards, and testing try and true Legacy decks against these brand new decks in the making can be quite challenging. It’s something we need to get used to and a skill we need to learn in order to take our game to the next level and hopefully this gave you some insight on that, until next time, I wish you the best of luck in your own testing!