It is time for yet another edition of the TES Matchup Battles series and this episode we take on Moon Stompy!

Moon Stompy is a prison aggro deck. It uses different lock pieces to disrupt the opponent’s mana and making it more difficult to cast their spells. Moon Stompy then follows up with a fast clock to try and kill the opponent before they can find answers to their lock pieces. In order for this strategy to work they have to use a lot of fast mana like sol lands and Simian Spirit Guide to get the lock pieces out before the opponent starts casting their spells. I am not sure why, but recently I have been playing against this deck a lot more recently, both online and in paper. It may be because of Chandra, Torch of Defiance, she is a fantastic card for this deck providing card advantage, damage to the opponent, and mana acceleration. This was a matchup I had not played against or really knew what their decklist looked like for months, and I happened to play against it at Eternal Weekend. I completely sideboarded wrong and played against it poorly because of that. If you go read my tournament report you’ll see more in detail what my strategy was and how I played. Luckily for me it did not cost me the match, but I want to make sure it does not cost me or any of you in the future, so here we go.

How does Moon Stompy matchup against TES?

Blood Moon, Magus of the Moon, Wasteland – The mana disruption plan. Depending on the situation these cards could either lock us out completely or be easy to beat. If Moon Stompy is on the play and has a turn 1 moon effect, then it could just be lights out. We are then relying heavily on having naturally drawn our basics and Chrome Mox + Lotus Petal to cast our blue and black spells. Luckily, even in this scenario we can still cast Rite of Flame, Burning Wish, and Empty the Warrens. If we are on the play or they don’t have one of these types of effects on turn 1 then it gives us the opportunity to fetch for a basic land. This is a matchup where our basic Island will be great, but just be aware that there will be some scenarios where these cards could just prevent us from even playing.

Chalice of the Void, Trinisphere – More permanents that try to prevent us from casting our spells, just what I like to see. These attack us from a different angle though, instead of going after our mana they try to dictate which spells we can cast, and making them cost more. Both of these cards have their pros and cons for the matchup because Chalice of the Void is cheaper, so it can get under our discard spells a lot easier, but we can also win through this depending on our hand. We can just make a horde of goblins through this card. Trinisphere, however, is one that we must answer. Can’t really brute force our way through this one. On the bright side this one is easier to answer while it’s in their hand because 3 mana vs 2 is significant in potentially representing another turn, and not all lists play Trinisphere, but they all play 4 Chalice of the Void.

Fiery Confluence – At Eternal Weekend when I played against Moon Stompy I did not realize that they played this card. I did not think they had an answer to Empty the Warrens, so I relied heavily on the goblins plan. After discussing my match after the round with some friends I realized that they played this card. Good thing I didn’t learn that during the game. Because most lists run 4 of this card as minimum answers to Empty the Warrens I do not like the goblin plan as much. Even when they don’t have an answer in hand the fact that they could have 4 top deck sweepers still scares me. I would ty to avoid Empty the Warrens in this matchup unless it is a must.

This is a matchup all about speed. From both sides of the matchup it’s going to be about getting underneath the other. The only difference is from TES we may have to answer 1 of their lock pieces first, but ultimately we are looking for a very fast hand. Opening hands with lots of cantrips is perfect in some matchups, but not here.

So, our game plan is to be as fast as possible. Aiming for a kill between turns 1-3. The slower we are then the more disruption we need, either in the form of discard or bounce spells, and that is usually play draw dependent on which is better. If we have a turn 3 kill with a Duress and an Echoing Truth then I’d say that’s a pretty good hand. Another good scenario is a turn 1 kill with no ways to interact. To summarize we need a very fast kill or some disruption, and I would generally avoid Empty the Warrens unless it’s a must because of Fiery Confluence. Most of the time a horde of goblins on turn 1 is good enough vs 4 mana sweepers, but with all their sol lands and Chrome Mox it’s just not very reliable.

Like I previously mentioned, our game plan is to try and be as fast as possible. We don’t want our hands to be all answers and full on cantrips. That just won’t cut it here, but we do need some answers and our combo. I cut the copies of Ponder because it is our worst cantrip, and too slow in this matchup. All of the bounce spells are fairly obvious as to why they come in. The opponent is going to be trying to disrupt us with all types of different permanents and these answer them temporarily to give us the window to combo off. I am cutting 1 Cabal Therapy here for the 5th bounce spell. I think this cut is debatable, but more of a preference. I cut Cabal Therapy because they have just too many lock pieces and a fairly wide variety. If we miss on the name then we could just lose. We name Chalice of the Void and they could have a Trinisphere, we name Blood Moon and they could have a Magus of the Moon etc. I also don’t want to have too many reactive cards. A hand full of bounce spells and discard is just too slow. We need have to the combo as fast as we can while still being able to answer a lock piece or two.

To begin game 1 I win the die roll, which is huge since this matchup is all about speed and trying to play under their lock pieces, but I have a bad opening 7, so I mulligan. I keep my 6 and scry a Dark Ritual to the top of my library. 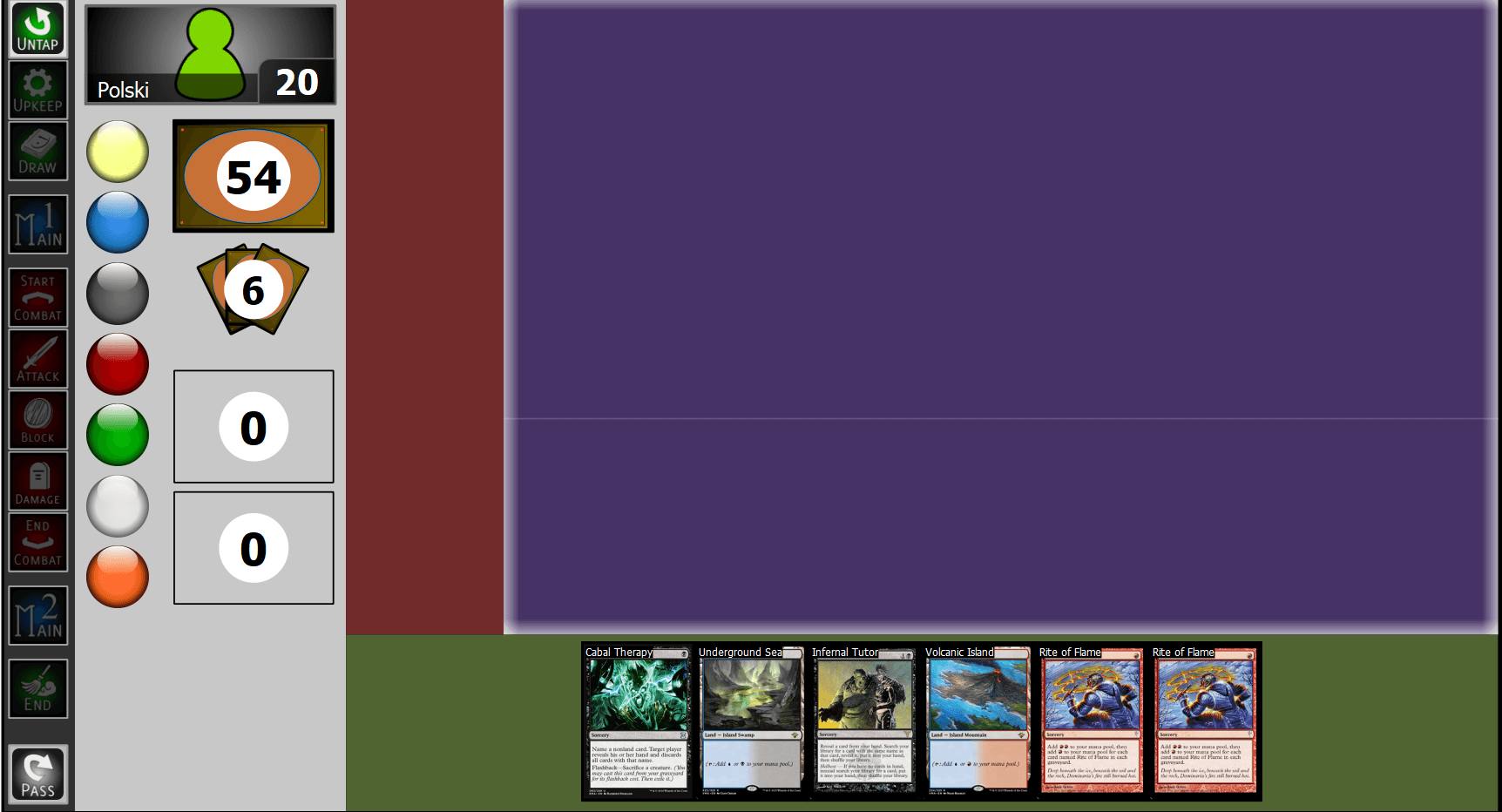 I have a turn 2 kill with a discard spell for a lock piece. This is one of the reasons I trim down on 1 of the copies of Cabal Therapy because there are quite a few cards we can name here. We just have to avoid him playing one on turn one, and we can combo off on the second turn. We can’t really beat any of his lock pieces with our current hand, so need a little bit of luck on this one. I ended up naming Chalice of the Void, and I typically do in these scenarios. The reason is because it requires less resources than the other lock pieces. Cards like Trinisphere and the moon effects all require 3 mana, so they need a sol land plus an additional mana source to play on turn 1, where as Chalice of the Void just requires a sol land. I end up missing with my name, and he does have a Blood Moon, but not a third mana source to be able to play it on turn 1, so I can Ad Nauseam on turn 2, and it’s good enough to win the game.

Here is another situation, and I am on the play and I take a mulligan. 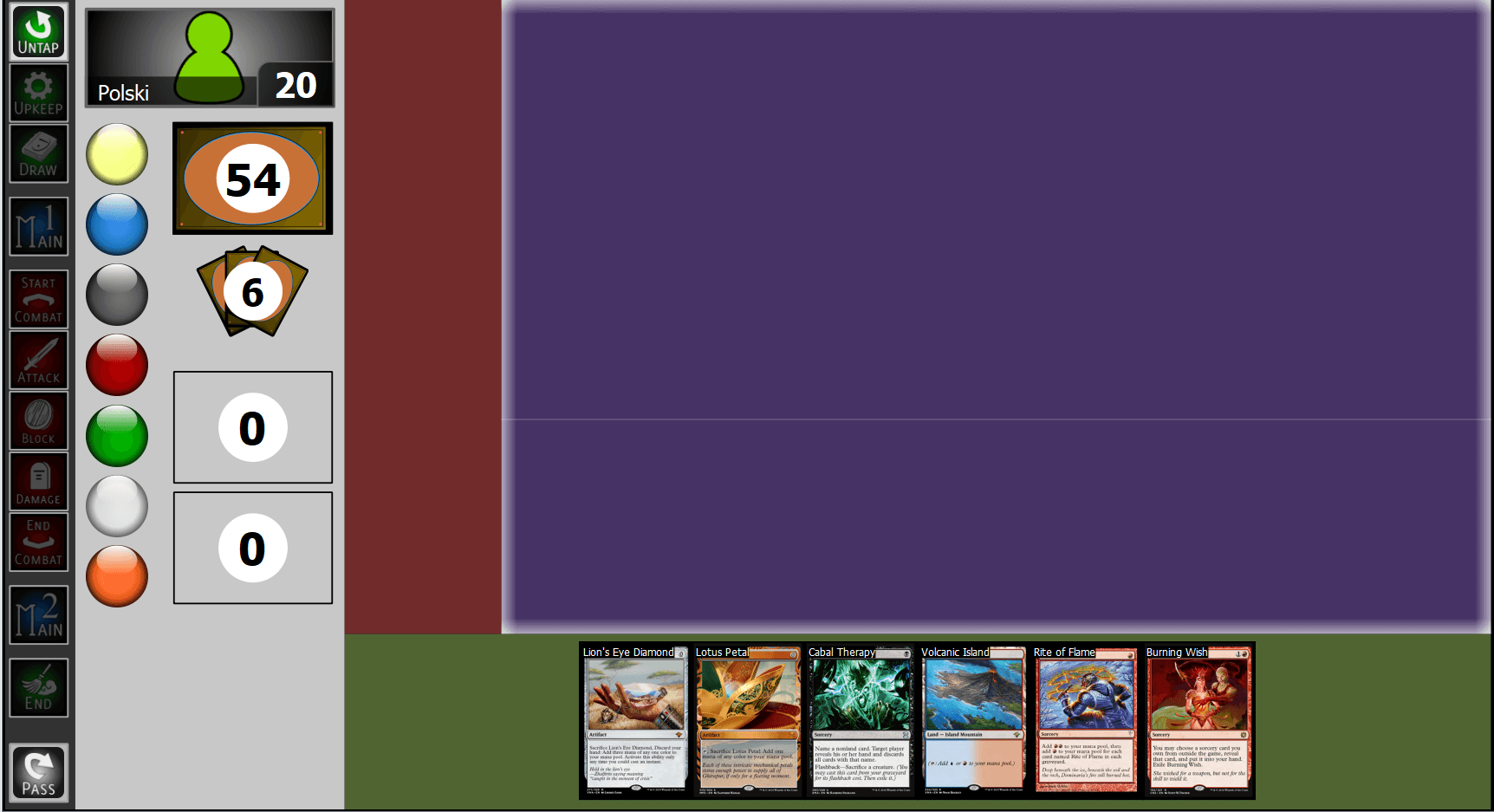 While typically I do not like the Empty the Warrens plan here is a case where I think it is worth it. We have the ability to make 10 goblins and then flashback a Cabal Therapy (9 goblins) naming Fiery Confluence. This would only give them a couple draw steps to hit another. Also, if we decide to wait to try and go for an Ad Nauseam kill the he could have a lock piece that we just can’t beat. In this scenario I think it’s best to for it now and minimize the number of outs he can have. I go with that plan, and he does not have one in his hand, and he also doesn’t draw one, so he concedes.

Onto a bonus game, and he mulligans to 6 and I keep my 7. My hand is pretty good. I am close to a quick kill, a bounce spell, a cantrip, a basic Swamp and a Chrome Mox to help out vs moon effects. The opponent started the game by playing Ancient Tomb and exiling Simian Spirit Guide to cast Blood Moon, and he passes the turn. I untap and cast the card I drew for my turn, Gitaxian Probe, and this is the situation. 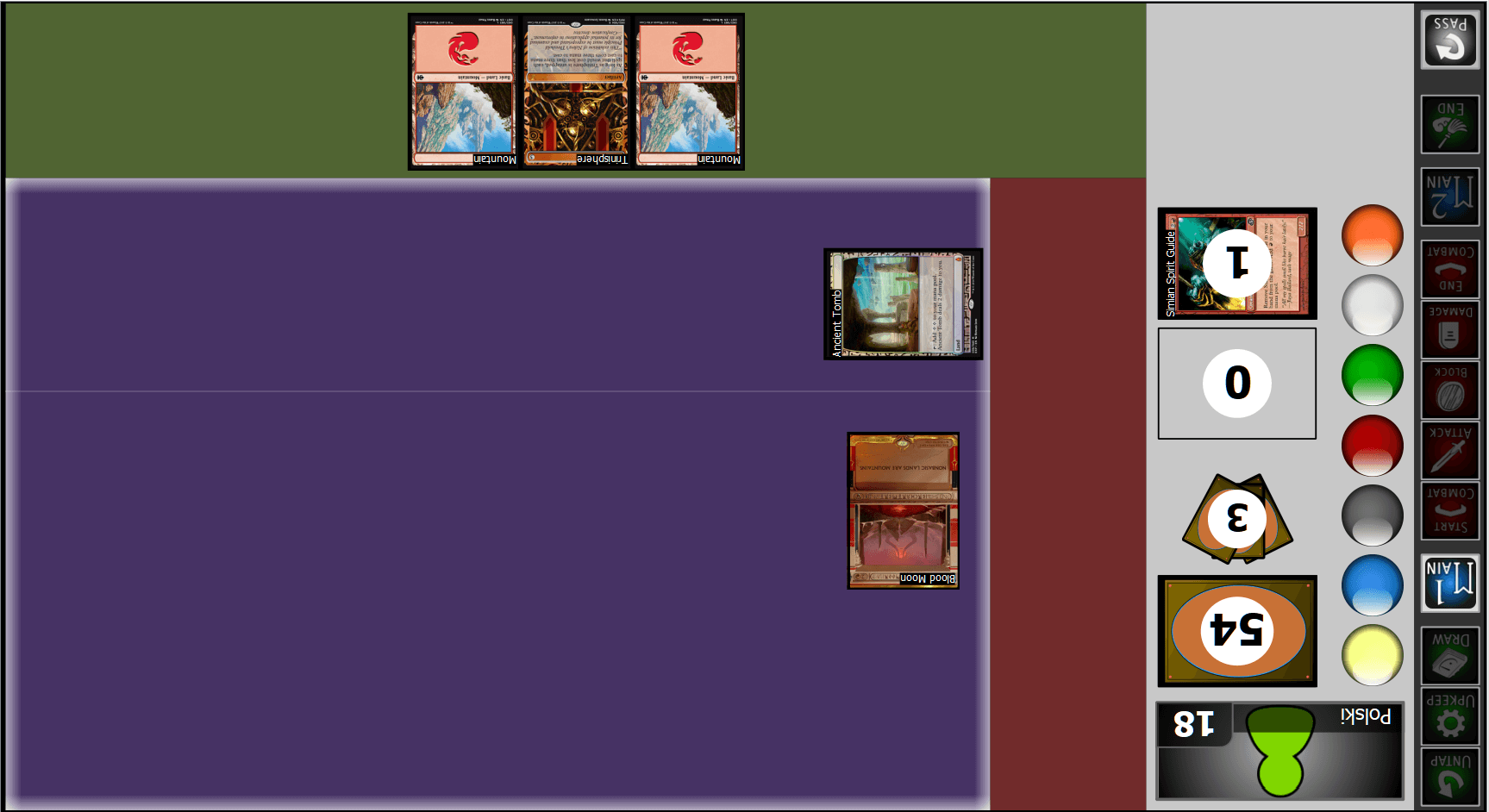 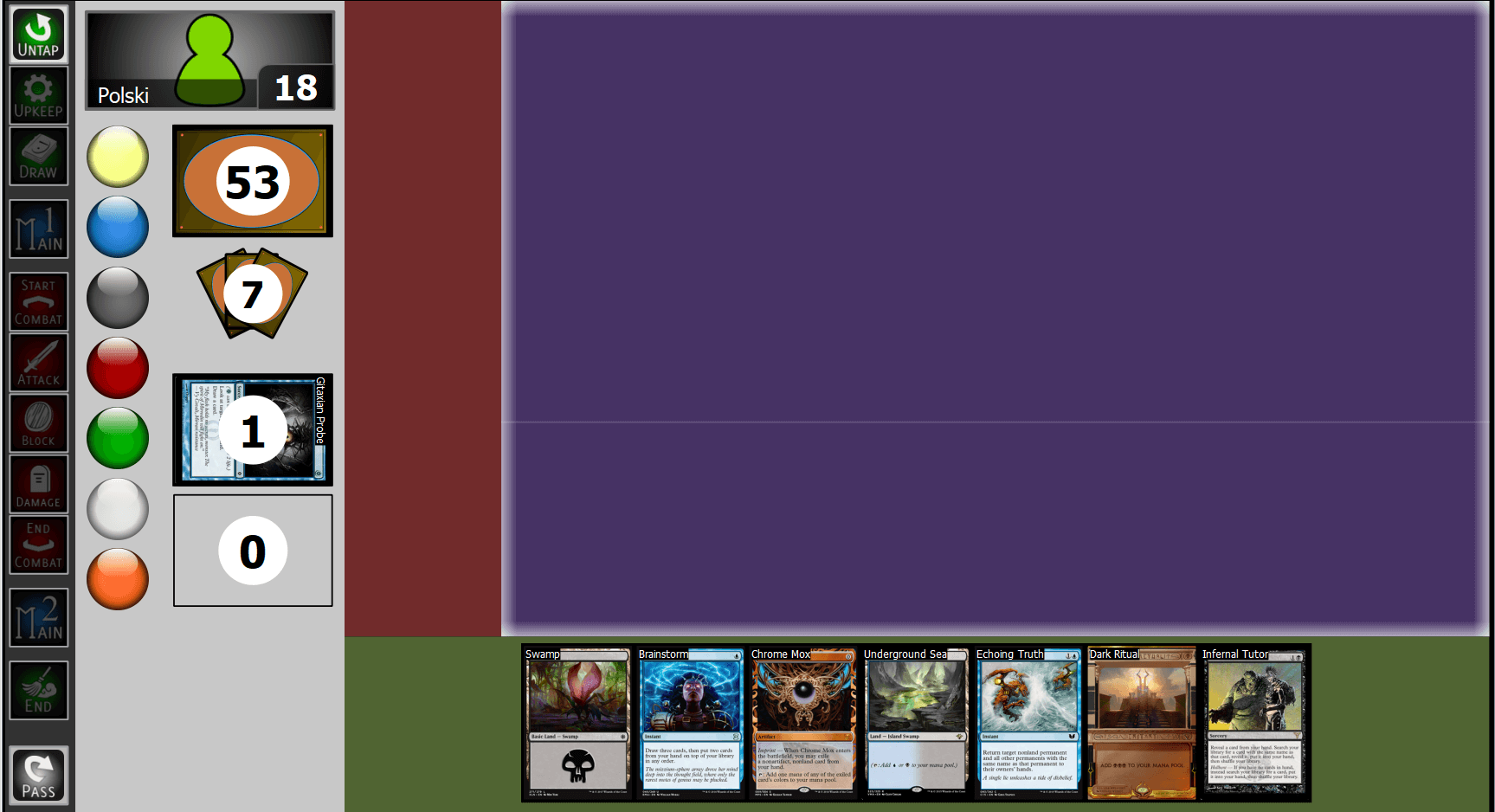 This may be fairly obvious, but the opponent made a huge mistake here. Playing out the Blood Moon first over Trinisphere is just a big mistake. We can still potentially combo off through a turn 1 Blood Moon, but not a Trinisphere. It also means he cannot play his Trinisphere on turn 2 because it shuts off his sol lands. What do you think is the best way to approach this situation to try and win the game?

I don’t want to influence any thoughts on what I did, and I like to leave the last one a little open to get you to think without my answer. This one is pretty tricky and I think there are many different paths we could take here, so what would you do? Let me know, and I will post what I did and the result in the next one.

The TES community is one I love for many reasons, but my favorite reason is because we can talk through plays and lines and it’s interesting to hear how other people play the deck and approach situations. I hope we can have a discussion on the last scenario and I learn from the community just as much as the readers, but until the next one let’s keep the conversation going.