Through the Looking Glass: 8-Cast with David Fleischmann-Rose 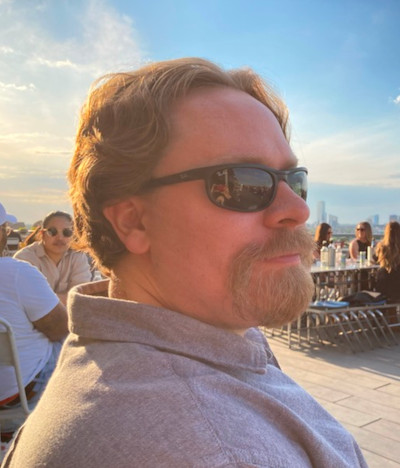 A few words on David Fleischmann-Rose

David Fleischmann-Rose was first introduced to Magic when a friend showed him how to play with an Unlimited Starter Deck in 1994. He bought his first cards – Revised and The Dark – at his local video rental store, and has been hooked ever since. David placed 12th at his first Eternal Weekend with The EPIC Storm and achieved a long-held goal with a Top 8 finish at Eternal Weekend 2021 playing 8-Cast. Nothing in Magic makes him quite as happy as drawing seven with Griselbrand. MTGO: HerrGevatter
How has [[Urza’s Saga]] changed the approach of 8-Cast? Does [[Urza’s Saga]] impact the match-up against The EPIC storm?

[[Urza’s Saga]] has changed 8-Cast from a fragile combo deck into a robust and consistent control deck. [[Urza’s Saga]] provides a fast, reliable win condition with bonus tutoring ability that enables a toolbox approach to address a spectrum of expected matchups. 8-Cast is the best [[Urza’s Saga]] deck in Legacy because it makes bigger [[Construct Token]]s than any other deck.

Against The EPIC Storm, the [[Construct Token]]s are definitely more relevant than the tutoring. While you can get [[Pithing Needle]] for [[Wishclaw Talisman]] and [[Shadowspear]] is situationally good, you usually want to find a mana source or bauble to make your [[Construct Token]]s bigger in this matchup, and then cast more spells or draw more cards.

The biggest impact [[Urza’s Saga]] had was to change the orientation of the deck as a whole. Against The EPIC Storm, you want the right control elements followed by a way to win quickly, and [[Urza’s Saga]] is the best option for winning quickly in 8-Cast.

Do you see 8-Cast as a Control deck, Prison deck, or Combo deck? Does this role change when facing The EPIC Storm? If so, how?

I see 8-Cast as a control deck, but more similar to Moon Stompy than Miracles. You want to control specific axes of the game, especially early, but then turn the corner quickly – whether that’s closing out the game with big [[Construct Token]]s, or building unassailable card advantage. Counterspells and card draw give you more flexibility to play into the midgame than Moon Stompy, but you lack the end-game inevitability of hard control decks.

Against The EPIC Storm, 8-Cast adds more controlling elements post-board. That means fewer win conditions, and thus, makes [[Urza’s Saga]] hands more important for turning the corner. I have found, however, the critical piece is to survive the big Storm turn. You can usually find ways to mop up afterwards.

How aggressively do you mulligan for a lock-piece such as [[Chalice of the Void]] compared to something like [[Force of Will]]?

I would also not recommend warping your deck post-board to make Chalice on zero better. The matchup is fine as is, and the zero converted mana cost TES artifacts aren’t the spells that kill you.

How do you think The EPIC Storm matchup compares to other [[Dark Ritual]] combo decks such as Ad Nauseam Tendrils or Doomsday against 8-Cast?

As a Control deck, 8-Cast is well set up against the three major [[Dark Ritual]] combo decks, The EPIC Storm, Ad Nauseam Tendrils, and Doomsday. For The EPIC Storm, having both [[Abrupt Decay]] and [[Prismatic Ending]] unlocks the key cards [[Orim’s Chant]] and [[Veil of Summer]] that give The EPIC Storm an advantage over the other two decks.

The TES backup plan of [[Echo of Eons]], however, is generally pretty poor versus 8-Cast and much worse than [[Past in Flames]] from ANT or [[Shelldock Isle]] from Doomsday. From the [[Dark Ritual]] side, I’d rather play The EPIC Storm against 8-Cast than either of the other two, but I’d make sure to stay away from [[Echo of Eons]] and would look for a very fast or a very flexible hand in my opener.

How effective do you think [[Empty the Warrens]] is against 8-Cast? Is it a card that you generally worry about coming from The EPIC Storm?

If you can resolve it, [[Empty the Warrens]] is very good against 8-Cast. The only answers I might have are [[Engineered Explosives]], which I’m not even playing anymore, or [[Sai, Master Thopterist]], which I generally board down on. [[Shadowspear]] can be an issue, but most of the time an early [[Empty the Warrens]] for 6-7 should get there.

As the 8-Cast player, [[Empty the Warrens]] is a card I think about, but it doesn’t change my post-board gameplan. [[Empty the Warrens]] doesn’t kill me any more than [[Tendrils of Agony]], [[Ad Nauseam]], or [[Peer into the Abyss]], so my focus is still on having the right disruption and counterspells to stop key enablers and tutors. If I think my opponent is going hard on [[Empty the Warrens]] I might keep in [[Sai, Master Thopterist]], like I would against Belcher, but from TES I mostly expect it as an upgrade to the [[Echo of Eons]] plan.

With The EPIC Storm playing white for [[Prismatic Ending]] and [[Orim’s Chant]], how have these cards changed the match-up for you — if at all?

In my current build, my sideboard plan is -2 [[Sai, Master Thopterist]], -1 [[Retrofitter Foundry]], -1 [[AEther Spellbomb]], +2 [[Force of Negation]], +2 [[Flusterstorm]]. This leaves some mediocre cards still in the deck like [[Shadowspear]], [[Pithing Needle]], and [[Mox Amber]] which is worse with fewer legendary creatures, but I don’t have much else to bring in against The EPIC Storm. Graveyard and creature hate is not especially relevant in the matchup.

In post-board games on the play, I’m looking for a turn-one [[Chalice of the Void]] or at least one counterspell, supported by mana and action. Action could be an [[Emry, Lurker of the Loch]], an [[Urza’s Saga]], or draw spells like [[Thoughtcast]], [[Thought Monitor]], [[Mishra’s Bauble]], or [[Urza’s Bauble]]. Post-board games on the draw is not too different except I value [[Chalice of the Void]] a little less and counterspells a bit more. Either way you need to expect [[Abrupt Decay]] or [[Prismatic Ending]], so it’s important to plan for losing the lock piece and how to disrupt The EPIC Storm without it.

With 8-Cast being a [[Chalice of the Void]] strategy, do you expect The EPIC Storm to bring in permanent hate? If so, how much?

I do expect TES to bring in some combination of [[Abrupt Decay]] and [[Prismatic Ending]], most likely 3-4 copies. [[Chalice of the Void]] is usually a card that needs to be answered, especially if I land a second one. Those cards can also slow down my plan by killing an [[Emry, Lurker of the Loch]], [[Sai, Master Thopterist]], [[Construct Token]], or other key piece, so they are rarely dead cards.

[[Galvanic Relay]] is a card I mostly ignore. It’s a great way for TES to build card advantage and find the tools they need to win, but it’s incredibly hard to interact with and not a card that immediately kills me. If I have a [[Flusterstorm]] and the TES player doesn’t have much else going on, I will most likely counter the [[Galvanic Relay]]. Otherwise, I’ll just look to interact with the key cards exiled. Having the cards exiled face up also gives you room to help plan your approach during your next turn.

Have you found that the fundamental turn shifts in post-board games due to the inclusion of [[Force of Negation]]?

In my version of 8-Cast, I’ve chosen to replace two [[Force of Negation]] with two [[Flusterstorm]] in the board for the 2-2 split. The card disadvantage of [[Force of Negation]] is real, and it often doesn’t get it done against the scariest card for 8-Cast — [[Meltdown]]. [[Flusterstorm]] also happens to often be better against TES. The only card it doesn’t counter that I care about is [[Wishclaw Talisman]].

[[Force of Negation]] as [[Force of Will]] five and six means you are almost guaranteed to have at least one in your opening hand, and the TES player has to respect that. That means the TES player needs to have disruption and/or multiple action cards before going off, giving the 8-Cast player more time to sculpt their hand and hopefully land [[Chalice of the Void]]. Having to respect Forces pushes the fundamental TES turn back, which should help the 8-Cast player in the matchup.

The biggest mistake I see 8-Cast players make against The EPIC Storm is countering the wrong spell. Fortunately, I’ve played The EPIC Storm long enough to get this right more often than not, but it’s tricky figuring out in any given situation which spell, if it resolves, will blow the turn open. Is it the [[Dark Ritual]] or [[Rite of Flame]] that will provide enough mana? Do they want me to counter something inconsequential to add more Storm? What are they likely to get with that [[Wishclaw Talisman]] and will they use it this turn or next?

Usually you want the TES player to expend as many resources as possible and counter the wish or tutor, but you need to closely track their mana, Storm, and card counts to make the best decision you can.

The biggest mistake I see TES players make against 8-Cast is casting [[Echo of Eons]]. Listen — I get it. [[Timetwister]] is my all-time favorite magic card ever. It will almost never be the right choice against a counter-heavy mono-blue deck like 8-Cast, however. Beyond that, I don’t think The EPIC Storm players go for an [[Empty the Warrens]] as often as they should. It’s hard to beat, though they have to get it off early.

I’d like to give a shoutout to Tom Hertfelder, the last person to win North American Legacy Champs in paper, who got me on to 8-Cast and worked with me on the specific tweaks for the list I played this past Eternal Weekend. I’d also like to give shoutouts to Steve and Nick; Steve for being my combo buddy (and sometime nemesis) back when I first started playing TES and he was on ANT, even if he’s since gone over to the Dark Side of Control and Nick for being the first one on the bauble train and a longtime voice in the wilderness for Legacy Bomberman. Here’s hoping we can get you from mono-white to mono-blue in a Legacy event soon.