Through the Looking Glass: Madness with Phil Gallagher 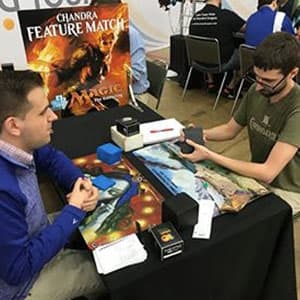 Phil Gallagher teaches Latin near Charlotte, North Carolina. While he originally made a name for himself playing D&T, these days he is more focused on producing more varied Legacy content. He drops daily content on his YouTube channel (ThrabenU), owns Thraben University, and is a host of The Eternal Glory Podcast.
How highly do you value [[Lion’s Eye Diamond]] in the matchup? Is it worth keeping a hand without a discard effect?

[[Lion’s Eye Diamond]] is easily the best card in the Madness deck. While it is not essential to any opening hand by any means, it is the thing that fuels the most degenerate hands. [[Lion’s Eye Diamond]] in the madness deck is close to a [[Black Lotus]] with upside, which is a ridiculous thing to put on paper. It enables the dream scenario of attacking with [[Anje’s Ravager]] on turn one via [[Anger]], for example. With few exceptions, a hand usually needs one of the discard outlets to be acceptable. In terms of raw power level, [[Lion’s Eye Diamond]] is best, followed by [[Putrid Imp]], followed by everything else.

What’s the percentage of games won are from messing up the opponent’s hands with [[Burning Inquiry]]?

It’s a non-zero number. At a guess, I’d say one game per league or two is won instantly and decisively with a [[Burning Inquiry]], and it vastly changes the texture of a few other games. [[Burning Inquiry]] is the highest variance card in the deck. Sometimes you discard your copies of [[Hollow One]] and curse your luck. Other times, your opponent discards two lands, flops around, and dies. Some builds of Madness try to shy away from [[Burning Inquiry]] due to this random nature as sometimes you’ll do something like flop an [[Uro, Titan of Nature’s Wrath]] in your opponent’s graveyard and put yourself pretty far behind.

How does the speed of Madness impact the matchup, if at all?

This deck just seeks to kill the opponent ASAP. It is a true aggro deck and, especially when [[Anger]] is involved, it can come out of the gates swinging hard. The pressure it puts on life totals means that [[Ad Nauseam]] becomes a bit less consistent at winning on the spot,. This means the TES pilot has less time to sculpt a game-winning situation via cantrips.

What sort of interaction does the Madness deck have before post-board games? What should The EPIC Storm be on the look-out for?

Interaction? In my aggro deck? In game one? Nope. Unless you count [[Burning Inquiry]] as interaction, there is no interaction from Madvine in game one scenarios. We are goldfishing.

How do you think The EPIC Storm matchup compares to other [[Dark Ritual]] combo decks such as [[Ad Nauseam]] Tendrils against Madness?

Conceptually, I see little difference between these decks while piloting Madness (though obviously in most other scenarios, the differences are very important). I try to kill them before they kill me. Madness doesn’t play interactive elements, so all the games versus combo decks tend to look about the same. Current TES lists aren’t on discard, so that means by [[Lion’s Eye Diamond]]s and such are safer than against some other combo decks.

Madness is so fast that sideboarding is really not necessary in this matchup. While many non-blue decks (e.g. Maverick, D&T) really rely on sideboard cards to even out the combo matchups, that’s just not necessary here. You can expect to reasonably kill combo opponents a good portion of the time before they can do their thing. I sideboard zero cards versus TES with many builds of Madness, though if you’re playing [[Mindbreak Trap]], that should come in here.

How do you value cards such as [[Faerie Macabre]], [[Leyline of the Void]], or [[Ancient Grudge]] against The EPIC Storm? Do you play any of them?

I do not. Every card you sideboard makes you worse at just getting your opponent dead. I don’t like boarding in medium-impact cards that can be ignored by some hands.

More recent lists have shifted away from [[Mindbreak Trap]], how do you feel about this?

I subscribe to the school of “get them dead” while playing Madness. I sideboard very lightly in most rounds. I don’t think [[Mindbreak Trap]] is really a great card in this deck. You frequently empty your hand with [[Lion’s Eye Diamond]] or other discard outlets, so even if you have one, you aren’t guaranteed to be able to hold on to it if you’re playing your deck in the most aggressive ways. Are you going to not cast that [[Burning Inquiry]] that could make your hand explode to hold on to [[Mindbreak Trap]]? Is your [[Anje’s Ravager]] going to force you to discard it anyway? See the problem?

I expect [[Veil of Summer]] and maybe [[Defense Grid]] to come out for [[Galvanic Relay]] and [[Aeve, Progenitor Ooze]].

[[Galvanic Relay]] is a card that continues to overperform in TES? Is it a card you would expect the Storm pilot to sideboard in?

I think [[Galvanic Relay]] is a reasonable card to sideboard in. While it doesn’t win on the spot, which is really what you want to do, it can plug the holes for the game-one cards that are either dead or close to it ([[Veil of Summer]], [[Defense Grid]]).

[[Aeve, Progenitor Ooze]] is a sideboard option for The EPIC Storm. Do you find this any different than [[Empty the Warrens]]? Do they require different answers? Does the scaling size of the creatures have any impact in this matchup?

[[Aeve, Progenitor Ooze]] is WAAAYYY scarier than [[Empty the Warrens]]. The scaling means that even the larger creatures like [[Hollow One]] or [[Vengevine]] may be outclassed. If TES starts winning combat interactions, Madness has lost, either because the TES player becomes the aggressor and wins quickly, or because they can hide behind a wall of oozes safely and rebuild.

What is the biggest mistake you see Madness players make against The EPIC Storm?

Sideboarding too much. Just kill them. Your deck is not built to contain combo decks, so stop trying to do that.

If you have never played the Madness deck before, I encourage you to do so, even if that just means “proxying” it up and playing against a friend. It is, in my opinion, one of the most fun Legacy decks I’ve ever played. You get to do some degenerate things, and games play out very differently despite it being an aggro deck. You are not just doing the same thing every round. Lines are frequently interesting and difficult.

If you want to see it in action, here is the (first league) I played with the deck, which was a 5-0 while I was learning how the deck worked. Here is my most recent league with Madness, and this video contains an exhibition match of Madness versus Jeskai Ragstill against my fellow Eternal Glory Podcast member Brian Coval (BoshNRoll). More generally, if you enjoy Legacy Modern, and Vintage content, I’m releasing content five days a week on my (Youtube Channel). There’s, uh, some weird stuff there if I’m being honest, but I guarantee it’s a good time.