Through the Looking Glass: Painter with Jack Kitchen 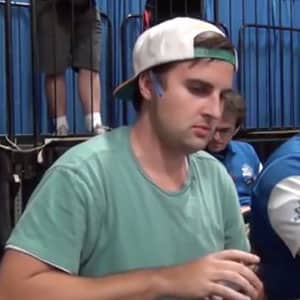 Jack Kitchen has been playing Legacy Painter since 2012 with the occasional foray into Dredge and The EPIC Storm (TES). Most recently, he recorded a top four finish at the SCG Play 4 Power. You can read all about his adventures with the deck through the years over on MTGTheSource.
Outside of Magic, Jack works as a financial analyst, enjoys researching NBA analytics, and dabbles in various sports like basketball, surfing, and golf.

What kind of Storm hate do you play in the main deck?

For the Red/White Shortcake variants, I play a single copy of Ethersworn Canonist. It can be found by both Enlightened Tutor and Imperial Recruiter, and also with Goblin Engineer. Against Ad Nauseam Tendrils (ANT), it is a usually a hard lock in game one while TES has ways to answer it through Burning Wish and Empty the Warrens with artifact mana.

What are some of the advantages of splashing white in Painter instead of playing the mono-red version?

Ethersworn Canonist is a nice bonus, but Enlightened Tutor is the main reason. It lets you save spots in the main deck by shaving copies of Blood Moon and Ensnaring Bridge, while also providing turn two access to sideboard cards. You can also choose to side out white cards in “grindier” matchups and essentially play as mono-red. Storm-wise, mono-red variants usually either need to run multiple copies of Thorn of Amethyst or just skimp on Storm hate entirely.

How has the addition of Karn, The Great Creator changed the matchup for Painter?

It has warped the matchup completely. Having the equivalent of a Burning Wish sideboard for artifacts guarantees some type of Storm hate the following turn. Karn, The Great Creator can regularly come down on turn two, and shutting off Lion’s Eye Diamond, Lotus Petal, Chrome Mox, and Mox Opal is usually enough to buy another turn or two.

What is your role in the matchup? Do you feel like it’s mostly a race, or does Painter take a more prison-like strategy when playing against Storm?

Buy as much time as possible. While it is a race and the end goal is to combo as fast as possible, Storm is the faster deck. Being able to recognize when you are a turn behind is important. This is another place Enlightened Tutor shines. Sometimes it finds a Lion’s Eye Diamond to complete a turn two kill while other times it finds Ethersworn Canonist or sets up a Painter’s Servant and Pyroblast turn.

How highly do you value Pyroblast and Red Elemental Blast in the matchup?

There are differing opinions on whether to counter Brainstorm and Ponder. I don’t hold myself to an all or never rule, but in general if your cantrip is countered, the Painter player is probably just hoping to survive until the next turn to play something scary. With a Painter’s Servant in play, everything changes as Pyroblast and Red Elemental Blast are hard counters. A sub-game starts where the Storm player has to decide between going off blind into a potential red blast effect or finding Duress or Thoughtseize. Postboard, the value of Pyroblast fluctuates on how many Chain of Vapors and Hurkyl’s Recalls are currently run.

How highly do you value Blood Moon effects against TES?

I learned a long time ago to never trust a Blood Moon hand against Storm. Rite of Flame, Burning Wish, Lotus Petal, and Chrome Mox all negate Blood Moon. Even when TES wasn’t running basic lands or Mox Opals Blood Moon was still a trap.

How effective would you say Empty the Warrens is in the matchup?

Painter is more or less a turn three deck. If an Empty the Warrens on the play can’t kill in three attacks through potential blockers, it probably isn’t good enough. Ancient Tomb can complicate the math, though. Empty the Warrens will also run into problems with Karn, The Great Creator. Some pilots run Ratchet Bomb or Engineered Explosives in the sideboard.

Do you find Painter to be more favored vs TES, or ANT? Why?

I can let the data answer this one pretty easily. Historically I am 71 percent against ANT (n=133) and 48 percent  against TES (n=38). TES is easily a turn faster, and doesn’t get locked out game one by an Ethersworn Canonist. Empty the Warrens can steal many games as well.

What do you typically bring in for sideboarding?

Not too much at the moment, just the extra Ethersworn Canonist and the Surgical Extractions. Since Painter’s Servant can counter Infernal Tutor and Burning Wish with Pyroblast, Surgical Extraction can be effective. Peeking at the Storm players hand can also let you know how much time you have before they attempt to go off. Against ANT, I would bring in a Tormod’s Crypt as they depend on Past in Flames and Cabal Ritual more.

If Storm was a larger percentage of the metagame, how would this change your main deck or sideboard?

Karn, The Great Creator has changed a lot of Painter’s sideboard construction, there isn’t much space left anymore. With the addition of Goblin Engineer, the main-deck is mostly tutors now too. Storm is a coin flip matchup most of the time anyways, so extra hate wouldn’t move the needle that much. The hope is that Karn, The Great Creator is good enough as an extra hate piece.

What are some of the biggest mistakes you see Storm players make in the matchup?

Body language. How a player reacts to Ethersworn Canonist or a Painter’s Servant often gives away their hand and tells me they don’t have a bounce spell yet. Keeping cantrip heavy hands is another. Storm is obviously faster in a vacuum, but it seems many pilots don’t respect how fast Painter can sometimes be. Most games will likely involve interference on or before turn three.

Does TES having access to both Crash and Pulverize change the way you approach the matchup?

I am much more likely to try to go for a quick combo kill compared to grabbing a Ethersworn Canonist knowing I can’t protect it with Pyroblast or Red Elemental Blast. Pulverize tilts the matchup as well, as it doesn’t allow for Goblin Welder or Goblin Engineer artifact swapping. I would value Karn, The Great Creator higher against TES than I would against ANT.

What other advice would you have for either Storm players or Painter players for the matchup?

Storm against Painter seems like on paper it would just be goldfishing. There is a surprising amount of play to be had in the early turns, though. Red Elemental Blast baiting and post-board bounce spell bluffing are extremely important. Overall, my biggest advice on both sides would be to just go for it earlier and more often if given the chance. Things can only get worse the longer the game goes.

I would like to take a moment to thank Jack Kitchen for joining Through the Looking Glass and providing some “colorful” responses on the Painter versus The EPIC Storm match-up.