4C Minsc Control is a deck with an accurate name. It is a four-control control deck without black cards that is centered around [[Minsc & Boo, Timeless Heroes]]. In typical control fashion, it plays lots of removal spells with [[Swords to Plowshares]] and [[Prismatic Ending]], counterspells, card draw, and ultimately planeswalkers to win the game. Four-color control decks that aren’t just splashing for a card or two, but fully embracing four colors have not been common in Legacy. That changed with cards like [[Expressive Iteration]] and [[Uro, Titan of Nature’s Wrath]] being able to find and play more lands. The namesake card [[Minsc & Boo, Timeless Heroes]], along with [[Pyroblast]] also push control decks to play red and green in a control shell. The combination of all these cards mashed together gives us 4C Minsc Control.

How does 4C Minsc Control matchup against TES?

[[Wasteland]] – Along with playing four colors and trying to cast their spells, they somehow managed to fit a couple of copies of [[Wasteland]] into the deck. We can’t play around [[Wasteland]] too much since we don’t play any basic lands, but our artifact mana helps cast our spells through a [[Wasteland]]. Just knowing they have [[Wasteland]] in their deck can help us sequence our lands. [[Wasteland]] could set us back several turns if we aren’t careful.

[[Pyroblast]], [[Hydroblast]], [[Narset, Parter of Veils]] – Miscellaneous disruption like [[Pyroblast]] and [[Narset, Parter of Veils]] will make our cantrips worse. They both got a little worse with TES removing [[Ponder]], but they still have some value. [[Hydroblast]] is still great against TES because of [[Rite of Flame]] and [[Burning Wish]].

This matchup is going to be one of TES’ slower games. Unlike other matchups, we are not under any pressure to try and combo as fast as we can. 4C Minsc Control doesn’t have any combos, permanent lock pieces, or a fast clock. That means we can take our time and use [[Galvanic Relay]] to combo over multiple turns and win with card advantage. Most of the opponent’s disruption will be [[Force of Will]] and [[Force of Negation]], so we don’t want to play into this by going for combos when it is unnecessary to lose to a counterspell. Both of those counters are card disadvantage, and we can take advantage of that by leaning into [[Galvanic Relay]] to win over several turns presenting many threats that they can’t overcome.

We are trying to win over multiple turns with [[Galvanic Relay]], so it makes sense to bring in the additional copy. [[Carpet of Flowers]] doesn’t play as nicely with [[Galvanic Relay]] as [[Rite of Flame]] does, but it’s just a better ritual we have access to every turn that this substitute is worth it. [[Abrupt Decay]] is a nice catch all against random permanents or planeswalkers the opponent could have. Anything that could put us in an awkward position at least we have an answer to. We don’t need to be quick in this matchup, so removing some of our faster artifact mana in favor of flexible removal spells is a good swap.

The games against 4C Minsc Control can be quite long with many different decision points, so for this example, I am showing two post board games. I began the second game on the draw, and I kept a slower hand. My opponent cast two copies of [[Ponder]] and a [[Narset, Parter of Veils]] during their third turn. For my third turn, I had three tutors, so I needed to decide how I wanted to sequence them and what to search for. I was under no pressure to combo off quickly here, so I just wanted to setup future turns. I decided I wanted to trade my [[Burning Wish]] for some new resources and get [[Galvanic Relay]], so I cast [[Dark Ritual]] and then [[Burning Wish]]. If the opponent had a counterspell, I could use the [[Veil of Summer]] to protect and cast [[Galvanic Relay]] on a later turn, but they did not and I was able to cast it this turn with the [[Chrome Mox]] exiling the [[Veil of Summer]] with four storm. 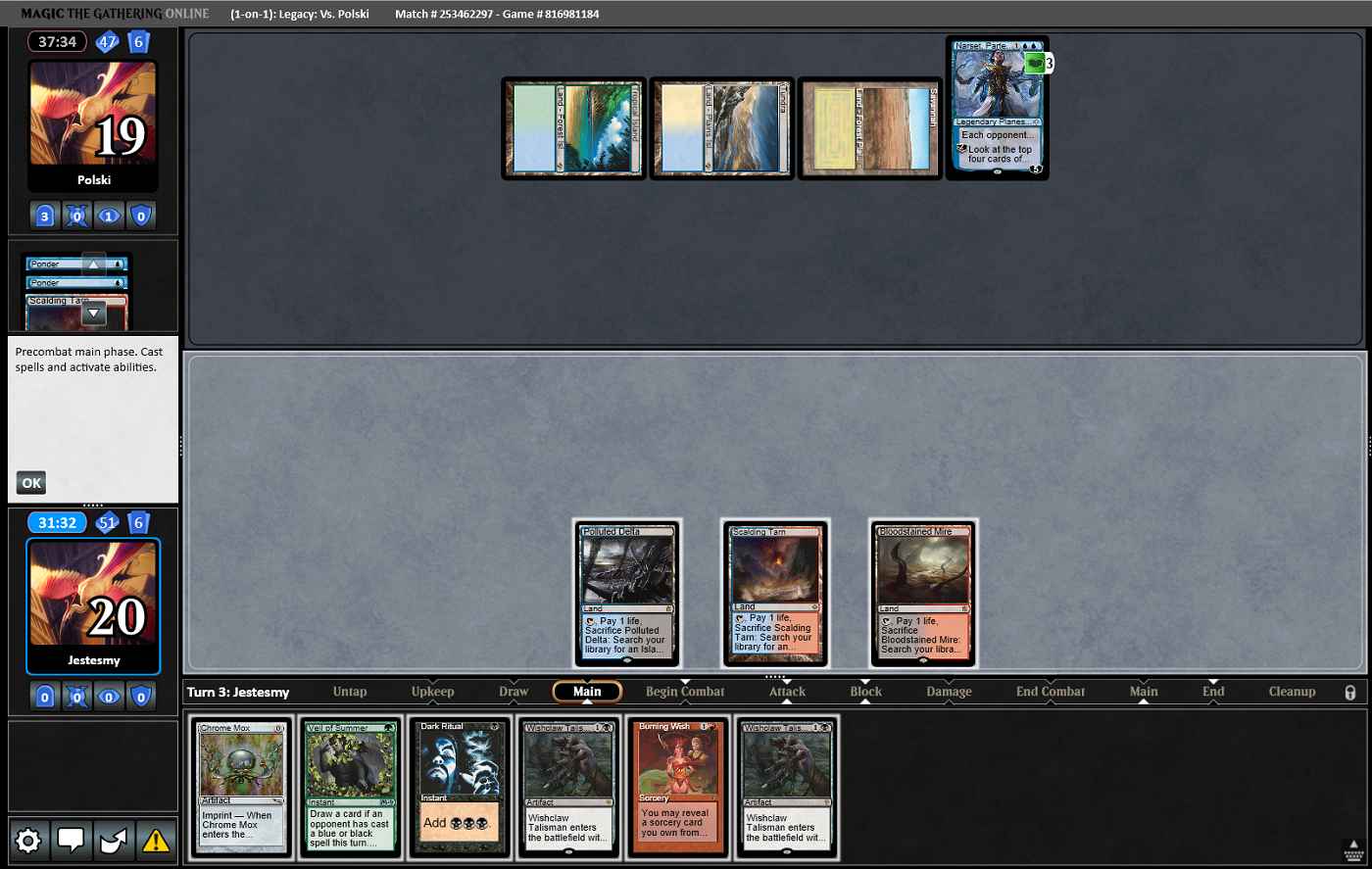 My opponent spent their turn casting a [[Uro, Titan of Nature’s Wrath]] and a [[Prismatic Ending]] on my [[Chrome Mox]]. On my next turn, I drew another [[Lion’s Eye Diamond]]. I decided to play the one from exile first in case my opponent had any counterspells they wouldn’t see what was in my hand first. That [[Lion’s Eye Diamond]] was countered by [[Force of Will]]. I couldn’t use [[Echo of Eons]] because of [[Narset, Parter of Veils]], and I had already used the [[Galvanic Relay]] in my sideboard. I planned on casting the one in my deck with [[Wishclaw Talisman]]. Using the [[Wishclaw Talisman]], [[Lion’s Eye Diamond]] that was in my hand, and the [[Lotus Petal]], I could [[Galvanic Relay]] for six. 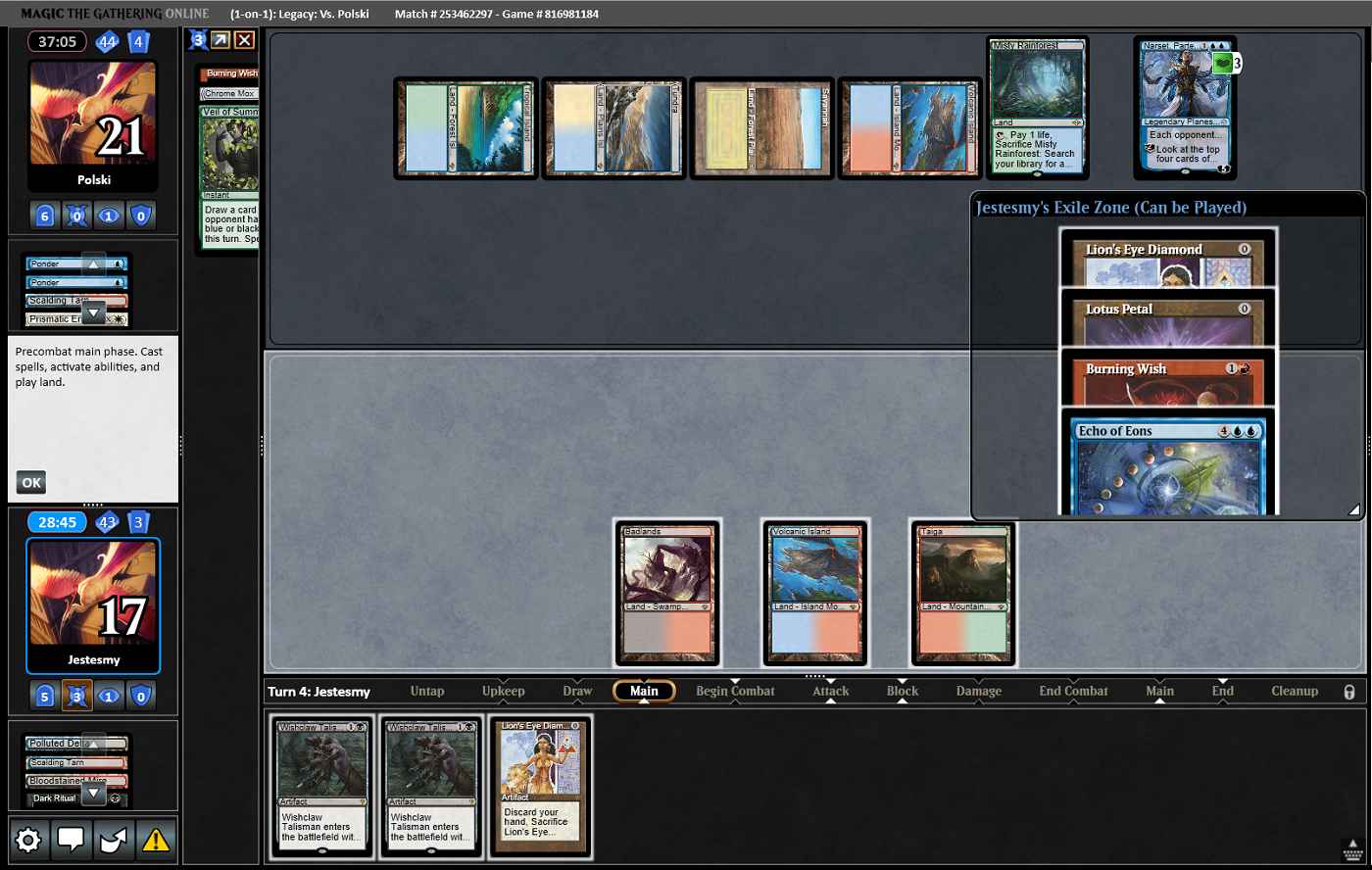 My opponent didn’t do much on their next turn, but my [[Galvanic Relay]] was not that great. Having drawn another [[Mishra’s Bauble]], I decided to use the [[Abrupt Decay]] on [[Narset, Parter of Veils]] and use all three copies of [[Mishra’s Bauble]] to get some new cards. 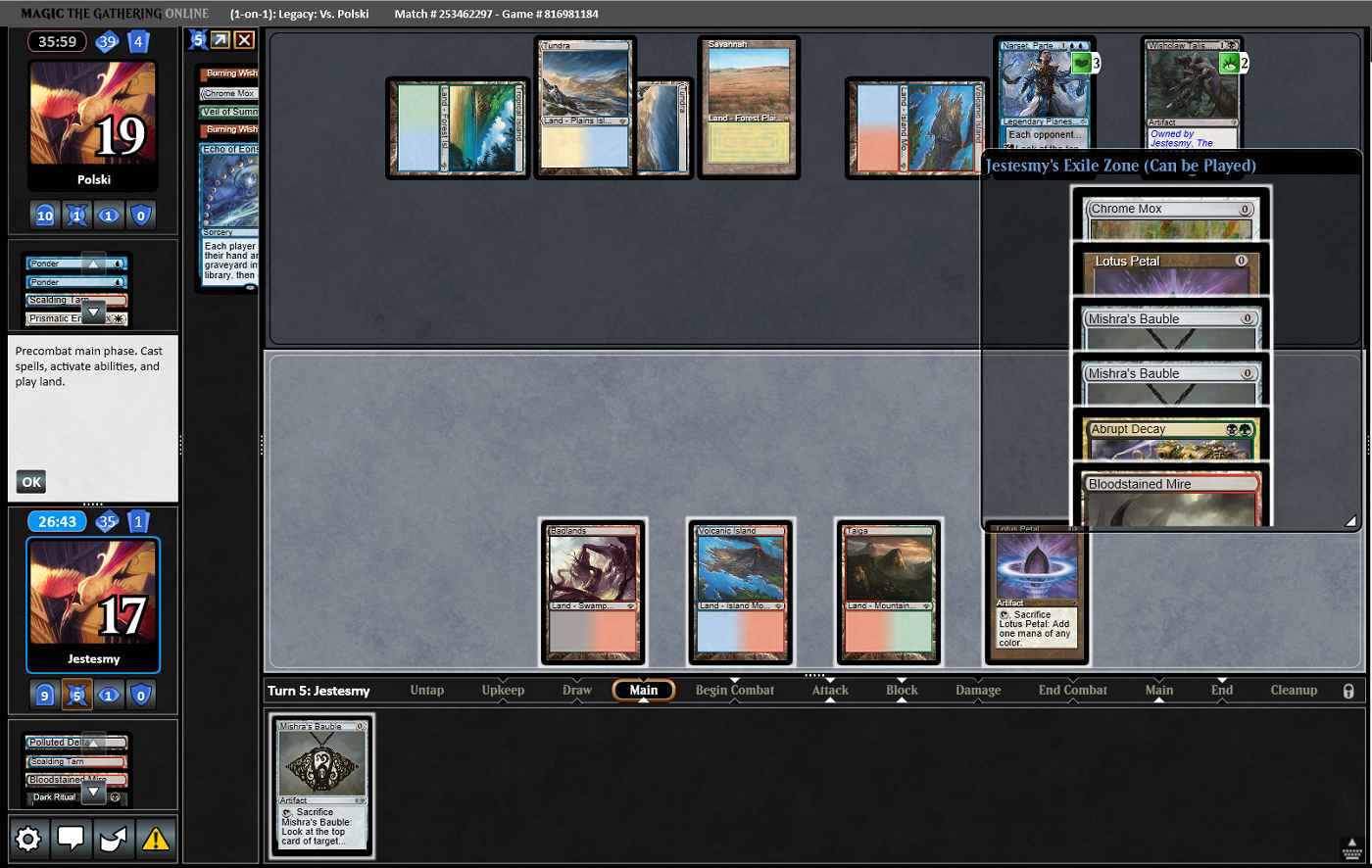 I used one [[Mishra’s Bauble]] on myself and then shuffled a land away before the draw. Unfortunately, between three cards drawn off copies of [[Mishra’s Bauble]] and my next draw step, I was not able to combo off or draw anything meaningful and eventually lost. 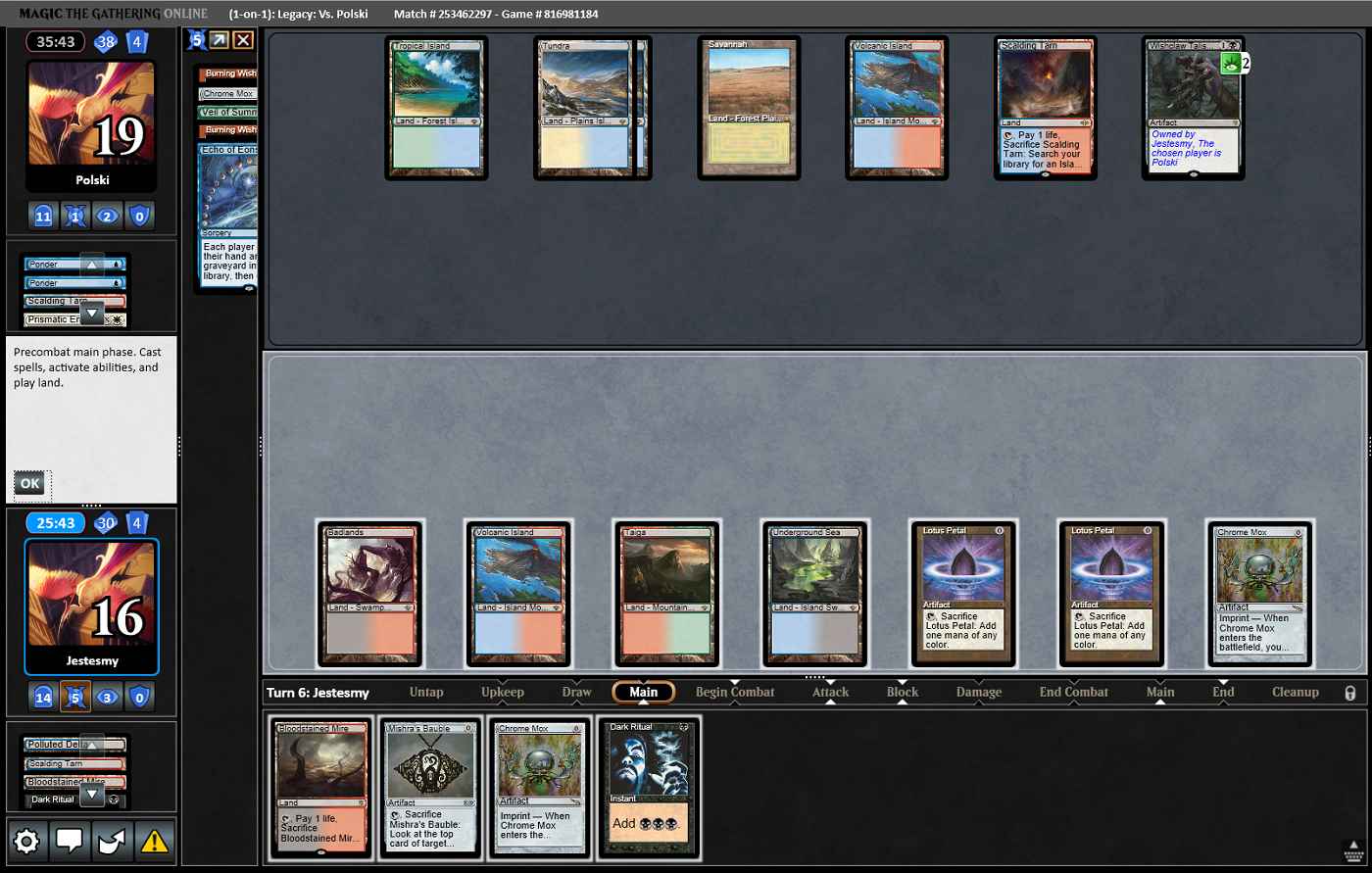 For the third game, I was on the play and took a mulligan down to six cards. I kept a hand that had a turn one [[Echo of Eons]] with [[Veil of Summer]], and I could have a land and a [[Mishra’s Bauble]] in play, so it was an easy keep. I went for it and the [[Veil of Summer]] was countered, but I kept going. It would just mean post [[Echo of Eons]] I would have to be cautious of counterspells. 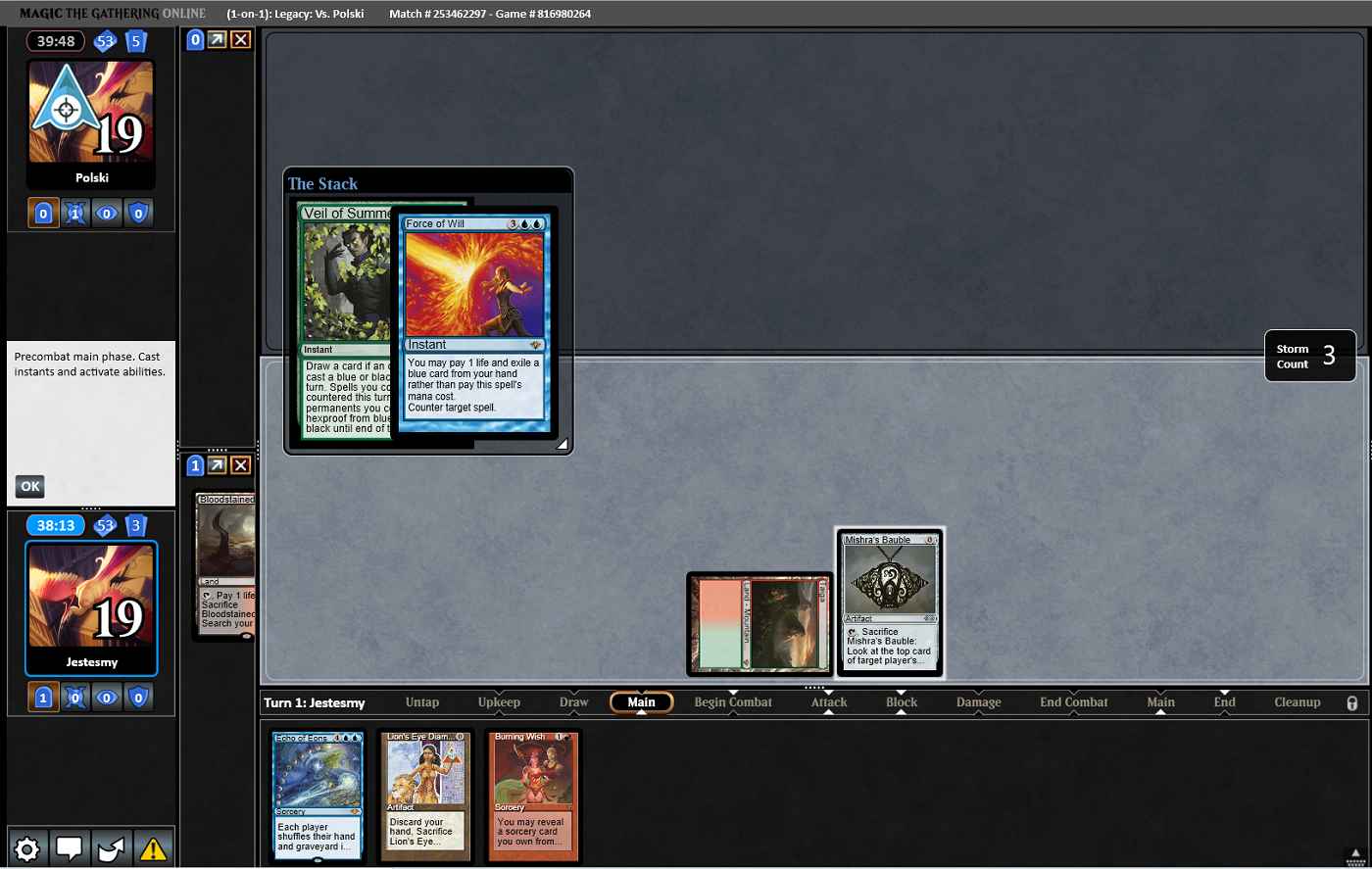 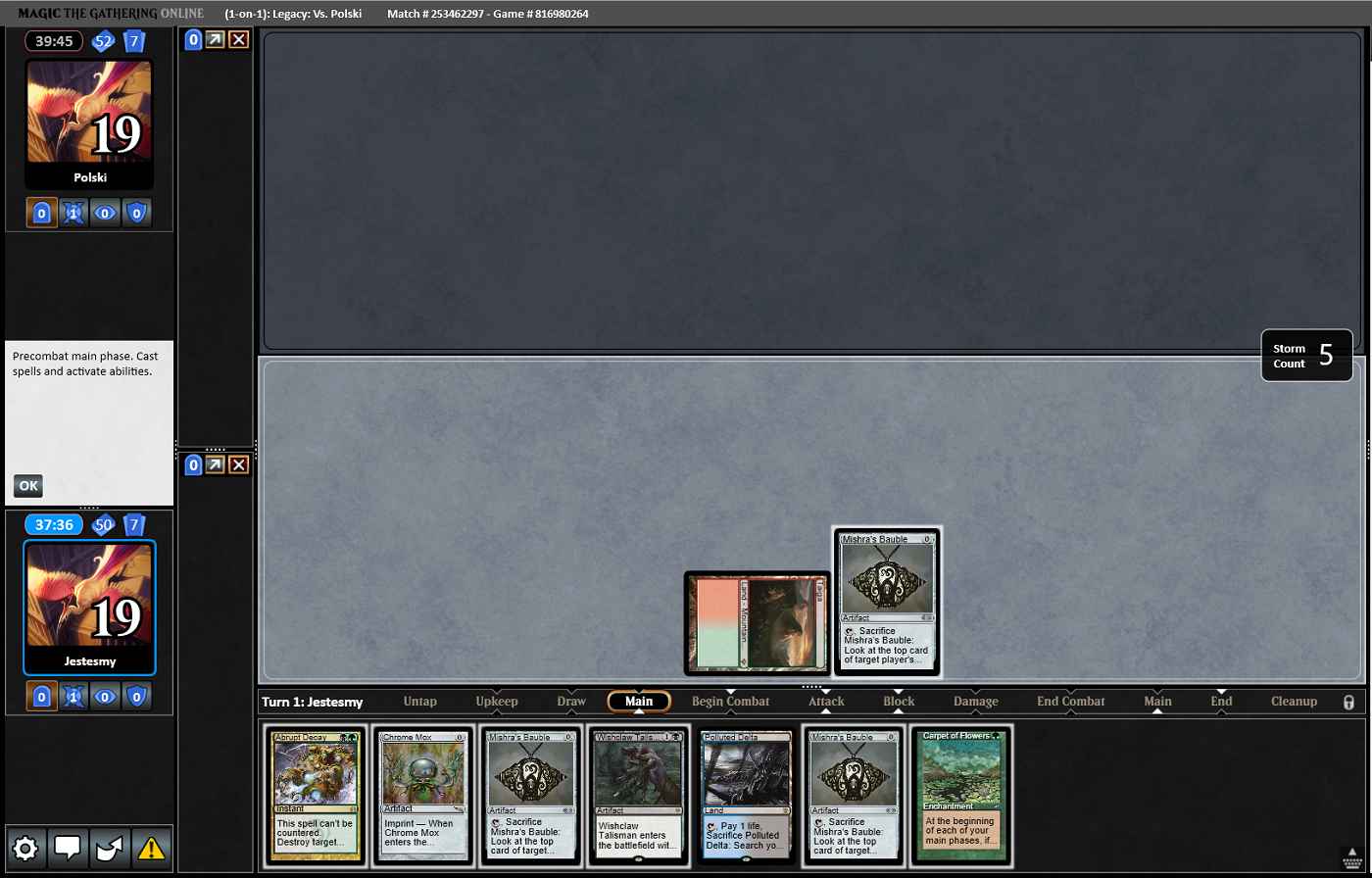 My opponent did play an island, but it was a [[Tundra]] to cast [[Prismatic Ending]] on [[Carpet of Flowers]] and ended their turn. I started my turn off by searching for [[Underground Sea]] and casting [[Brainstorm]]. 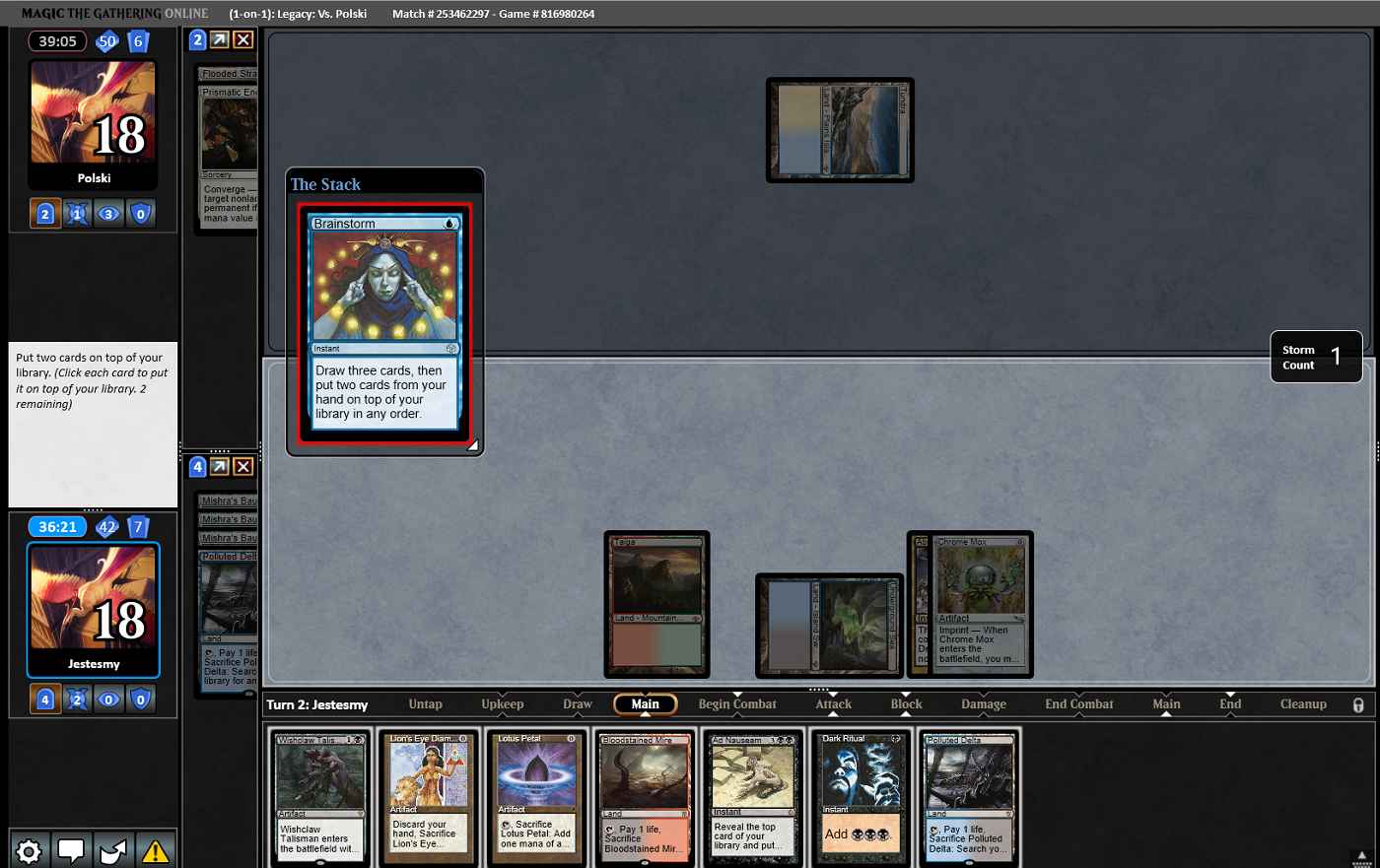 This hand had many different directions you could take it. My goal is always to go with the route that presents the most threats without having to spend all of my resources. In order to best do that, I put the two lands back and played out the [[Lotus Petal]]. This would let me cast [[Dark Ritual]] and [[Ad Nauseam]] on my opponent’s end step, and if it got countered, I could try to combo off on my next turn. On my opponent’s turn, they cast a [[Prismatic Ending]] on my [[Chrome Mox]]. In response, I floated the black mana and cast [[Dark Ritual]] and [[Ad Nauseam]]. It resolved and from there it was easy to win with [[Tendrils of Agony]] on my turn. 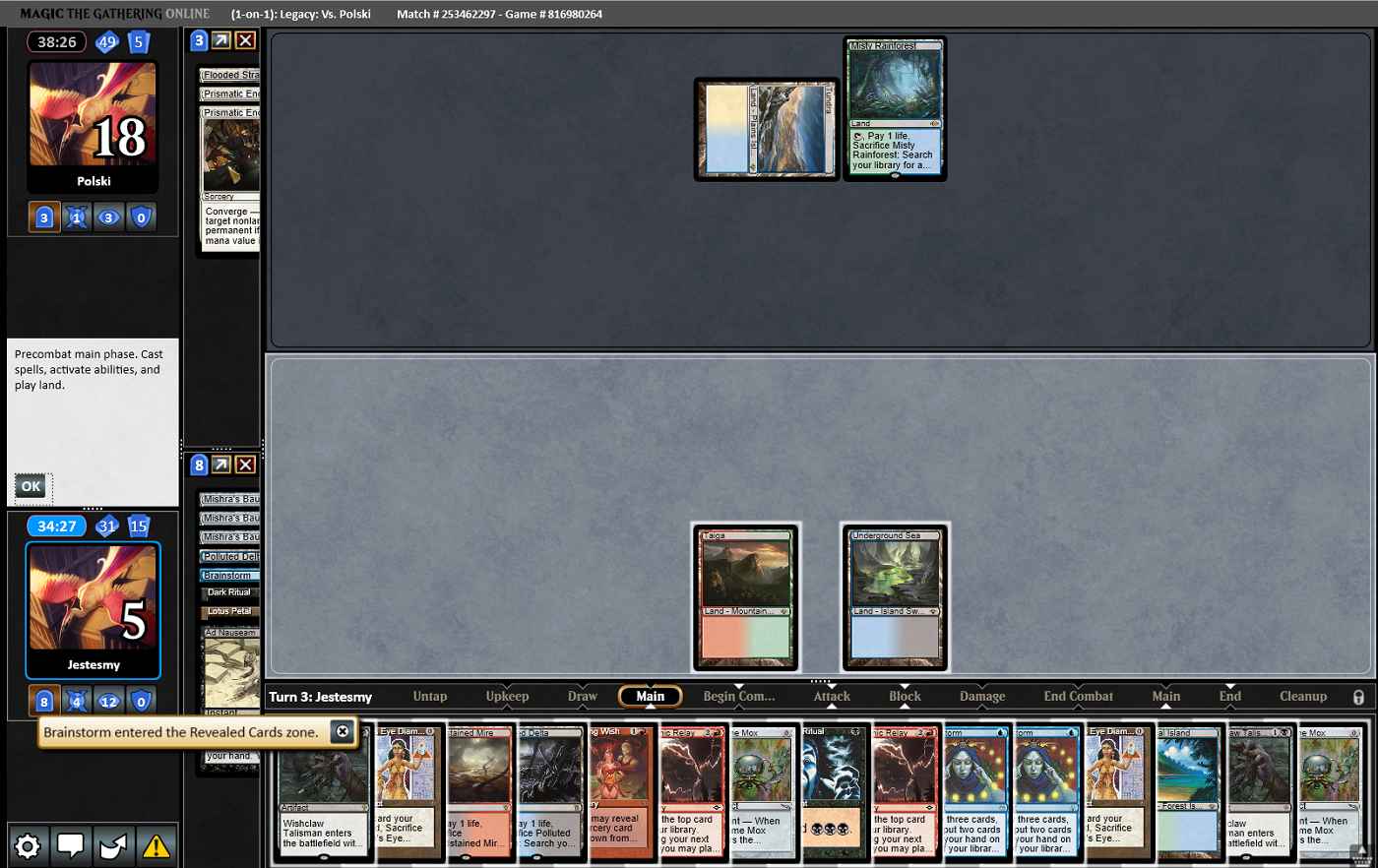 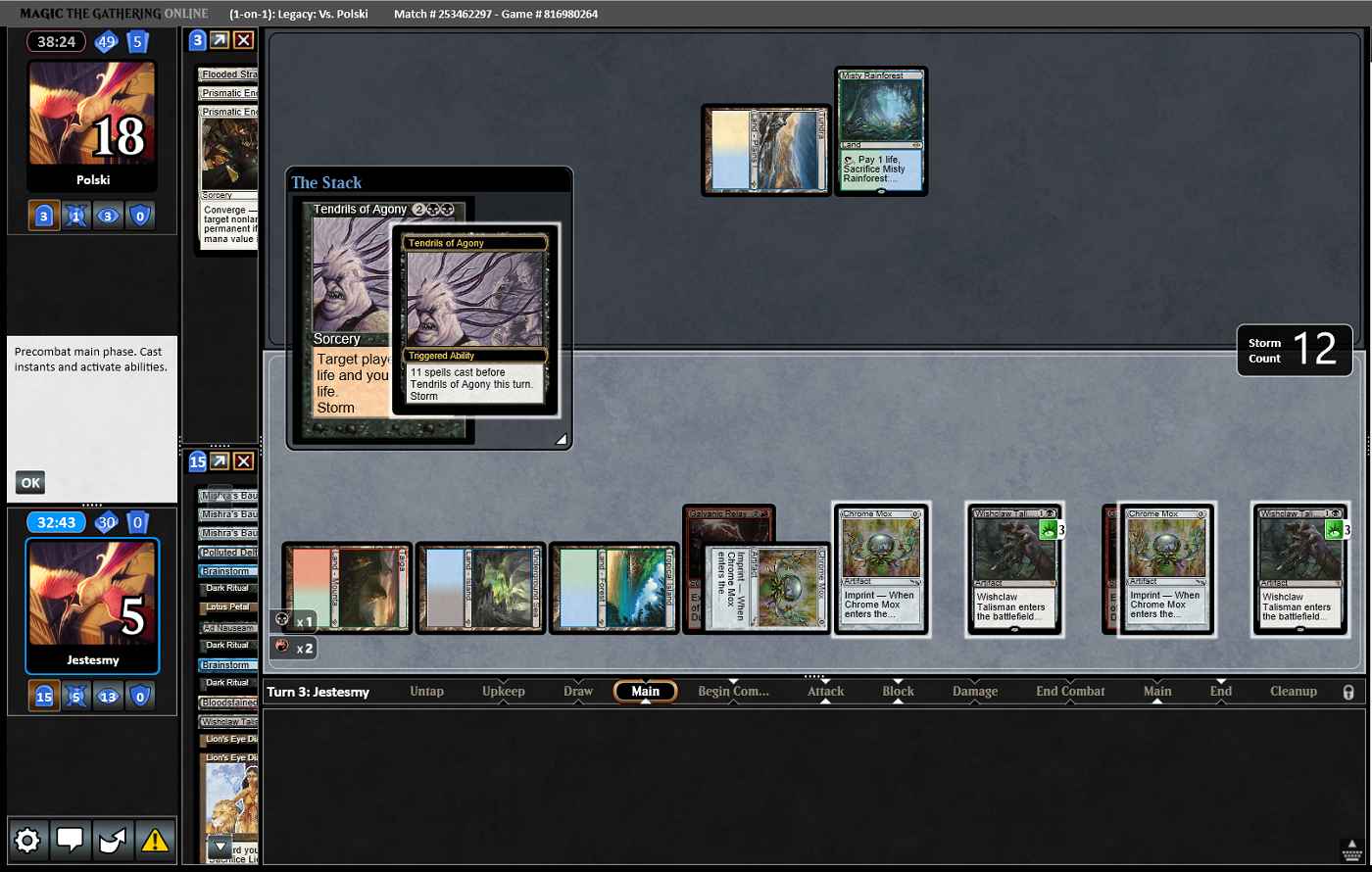 
There have always been UW control decks in Legacy, but recently, there have been many new cards that push control decks into other colors. We had [[Expressive Iteration]], [[Minsc & Boo, Timeless Heroes]], and [[Uro, Titan of Nature’s Wrath]] that all help a control deck in different ways. These cards give control decks cards to combat some of their weaknesses and strengthen their game plan. Putting this all together is what gets you 4C Minsc Control. I typically never hope control decks get more powerful cards, but I would much rather play against 4C Minsc Control than a Miracles style deck. The matchup of TES against control decks has always been a little tough, but [[Galvanic Relay]] has completely changed that. It forces control decks to counter the rituals instead of the payoff card, which makes it harder as a pilot against TES. I hope you enjoyed this article, can take some of the lessons learned, and apply them to your own playtesting.