8-Cast is the evolution of Karn Echoes. Both are mono-blue artifact based decks that play [[Force of Will]] and [[Chalice of the Void]]. The main differences is that Karn Echos played [[Karn, the Great Creator]] with [[Lion’s Eye Diamond]], a sideboard package, [[Echo of Eons]] and [[Hullbreacher]] to lock the opponents out of the game. 8-Cast doesn’t play the combos and plays more fairly with cards like [[Thought Monitor]] and [[Thoughtcast]]. That’s where it got the name eight casts. 8-Cast wins by trying to out card advantage the opponent by drawing more cards, using cards over with [[Emry, Lurker of the Loch]], and creating tokens with [[Sai, Master Thopterist]].

How does 8-Cast matchup against TES?

This matchup is about playing a very fine line. We want to go faster than the opponent can play a [[Chalice of the Void]] or use [[Urza’s Saga]] to make [[Construct Token]]s and tutor for disruption, but we also don’t want to try and combo carelessly into eight free counterspells. The keys to winning this matchup is having some plan against a counterspell, either in the form of [[Galvanic Relay]], [[Orim’s Chant]], or [[Veil of Summer]], and winning around [[Chalice of the Void]]. The opponent can’t win in the first few turns of the game, so we have a few turns to try and assemble a combination of cards to combo and beat their disruption. That is similarly true against all blue control decks, but the big difference is against control decks we can keep slower hands with several cantrips to try and sculpt that hand. Against 8-Cast we have to have it just naturally in our opening hand or the top few cards of our deck. And we sideboard [[Ponder]] out, so I mulligan aggressively to get a better hand. 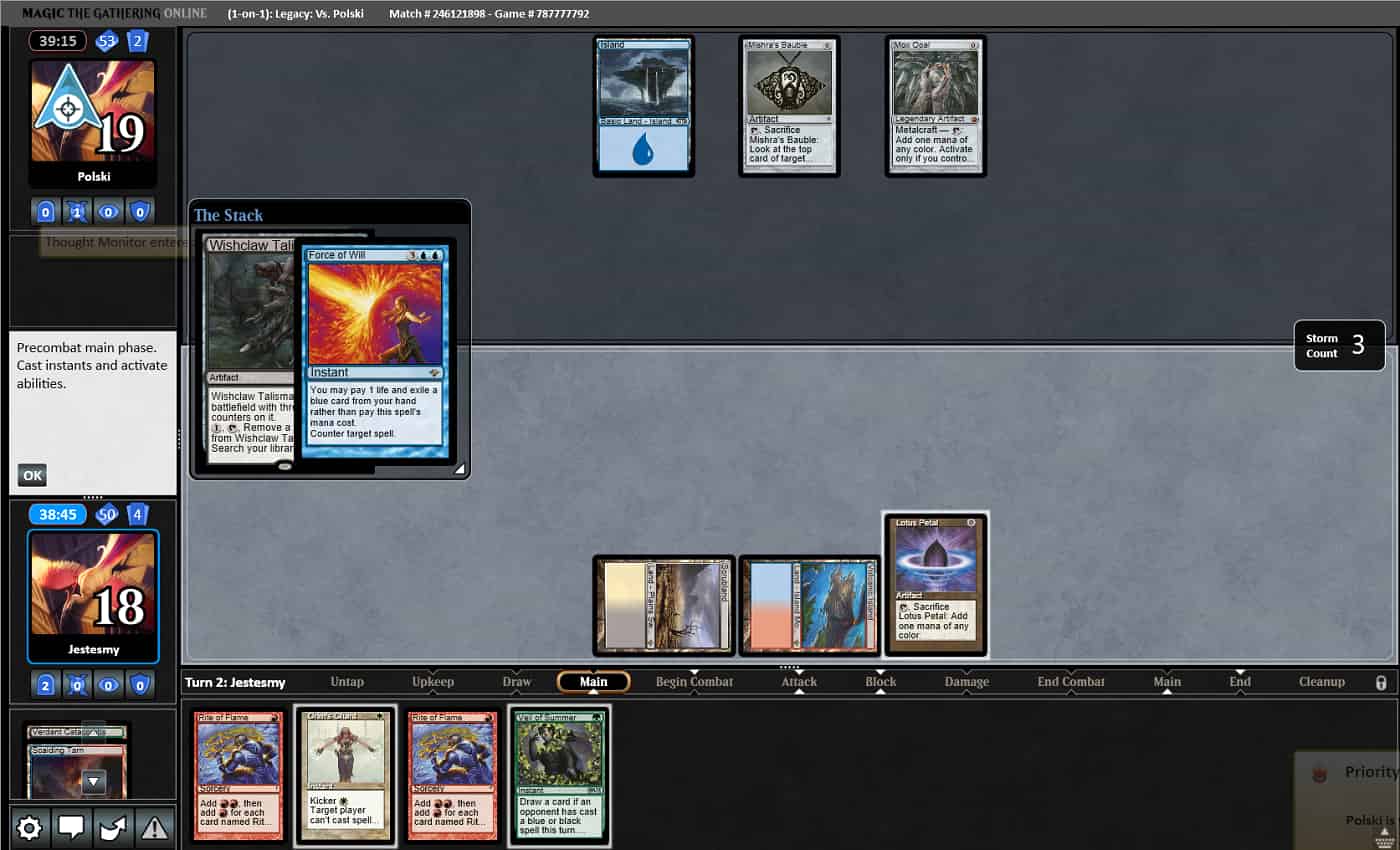 My opponent just drew a card and ended their second turn. On my third turn I had another [[Lotus Petal]] and a [[Brainstorm]] that I cast. The main card I drew was a [[Lion’s Eye Diamond]]. That would allow me to combo this turn and cast the [[Orim’s Chant]]. I put back the [[Ad Nauseam]] and the [[Ponder]]. 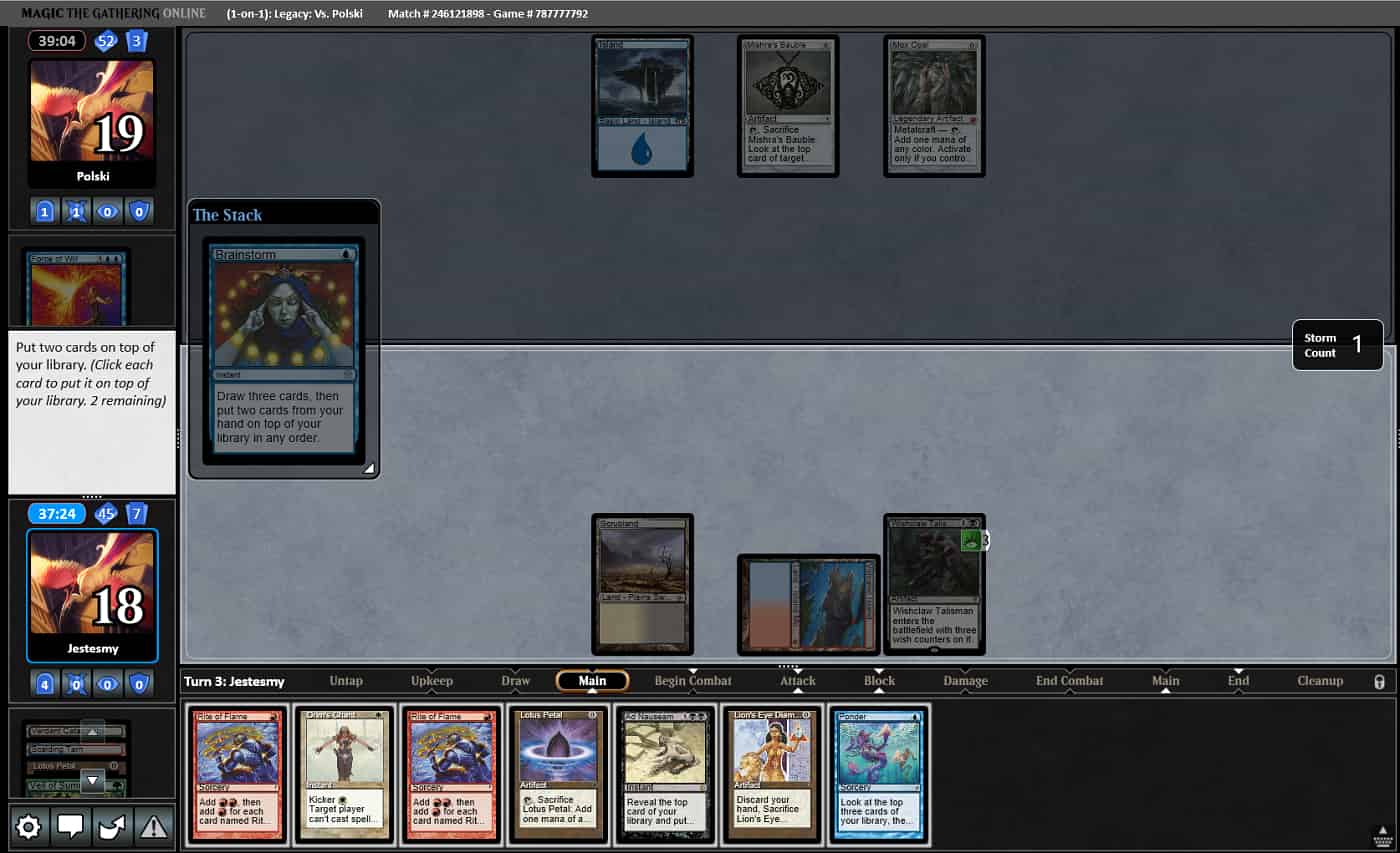 I began my combo by casting [[Orim’s Chant]], which was immediately countered by [[Force of Will]]. The opponent had already used two copies of [[Force of Will]], so I didn’t want to play around a third and continued my combo. 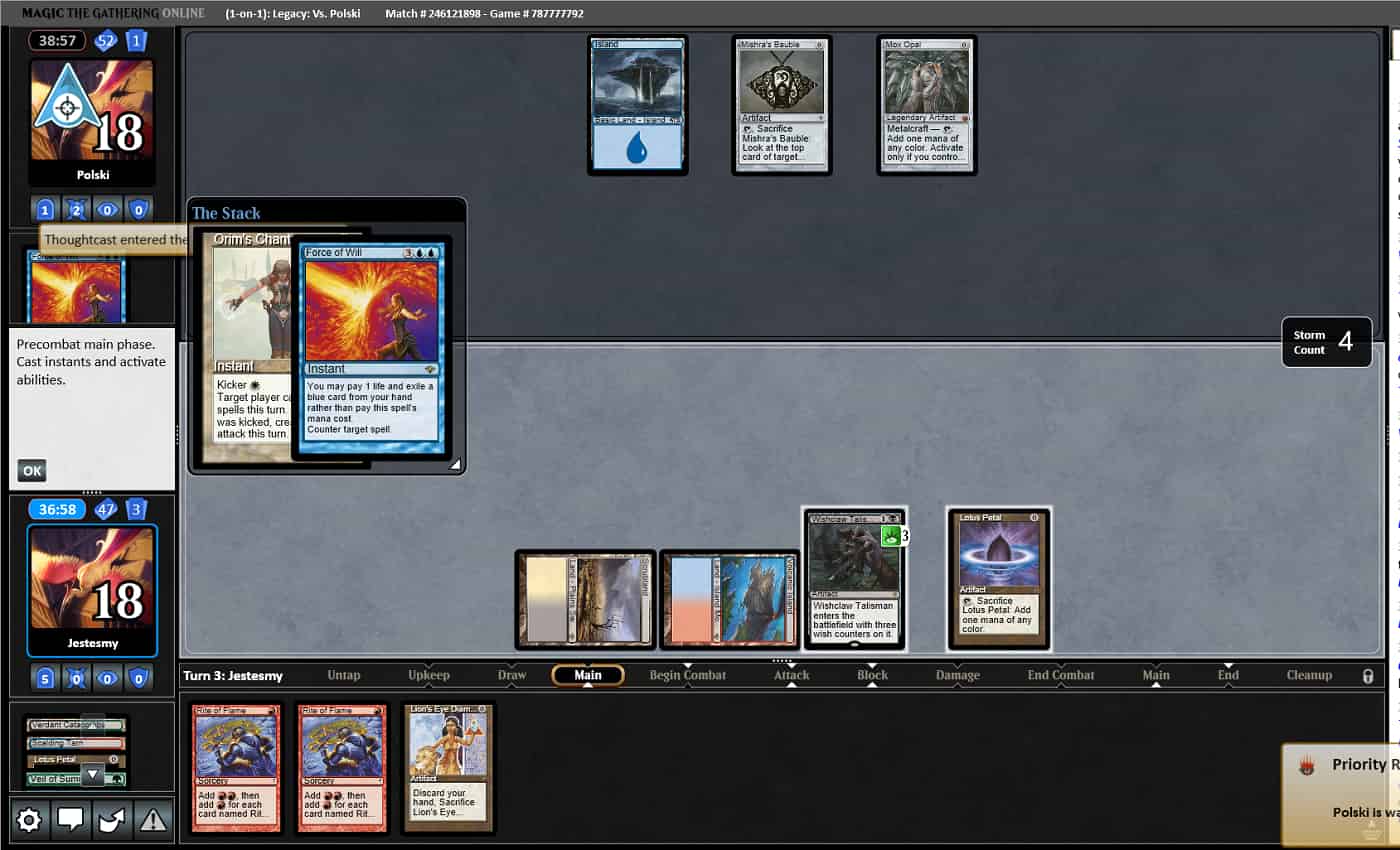 I used the [[Lotus Petal]] to cast both copies of [[Rite of Flame]] and sacrificed the [[Lion’s Eye Diamond]] for black mana. This gave me enough mana to activate [[Wishclaw Talisman]] to search and cast [[Ad Nauseam]]. 18 life was more than enough to win the game. 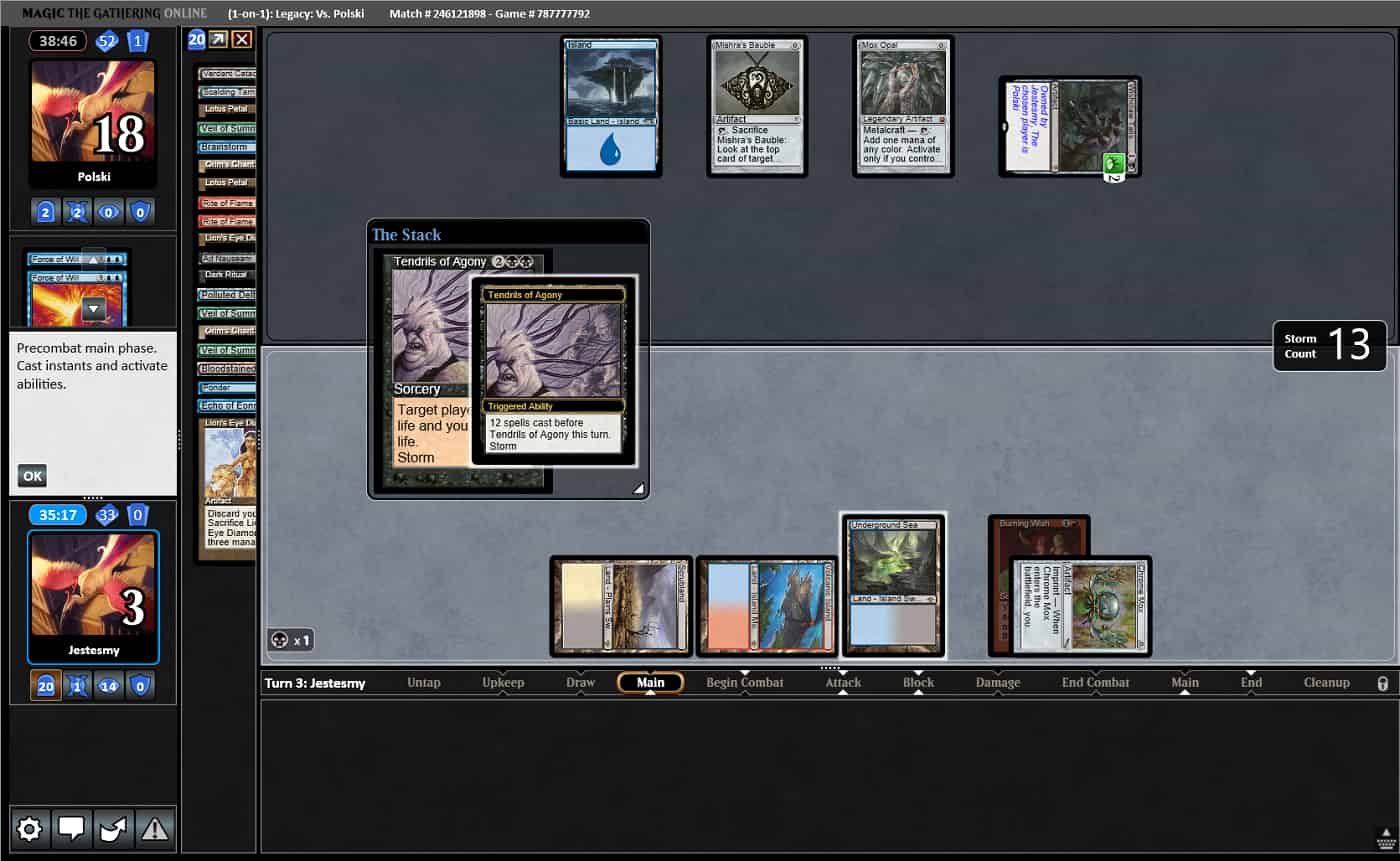 I sideboarded like I recommendedm and we both started the second game on a mulligan to six. I keep a hand with [[Brainstorm]], some rituals, [[Veil of Summer]], and [[Wishclaw Talisman]]. My opponent spent their first turn playing a land and [[Chalice of the Void]] on zero. They usually don’t do this because their deck has so many zero mana artifacts, but they didn’t have any this game. My new plan was to [[Brainstorm]] on turn two and try to find either a fetchland to shuffle away the artifacts away or an [[Abrupt Decay]]. My opponent then played a [[Chalice of the Void]] for one on their second turn, and I had to cast [[Brainstorm]] right then. Unfortunately, I didn’t find a second land and knew my next two draw steps would be non-lands once I put two cards back. 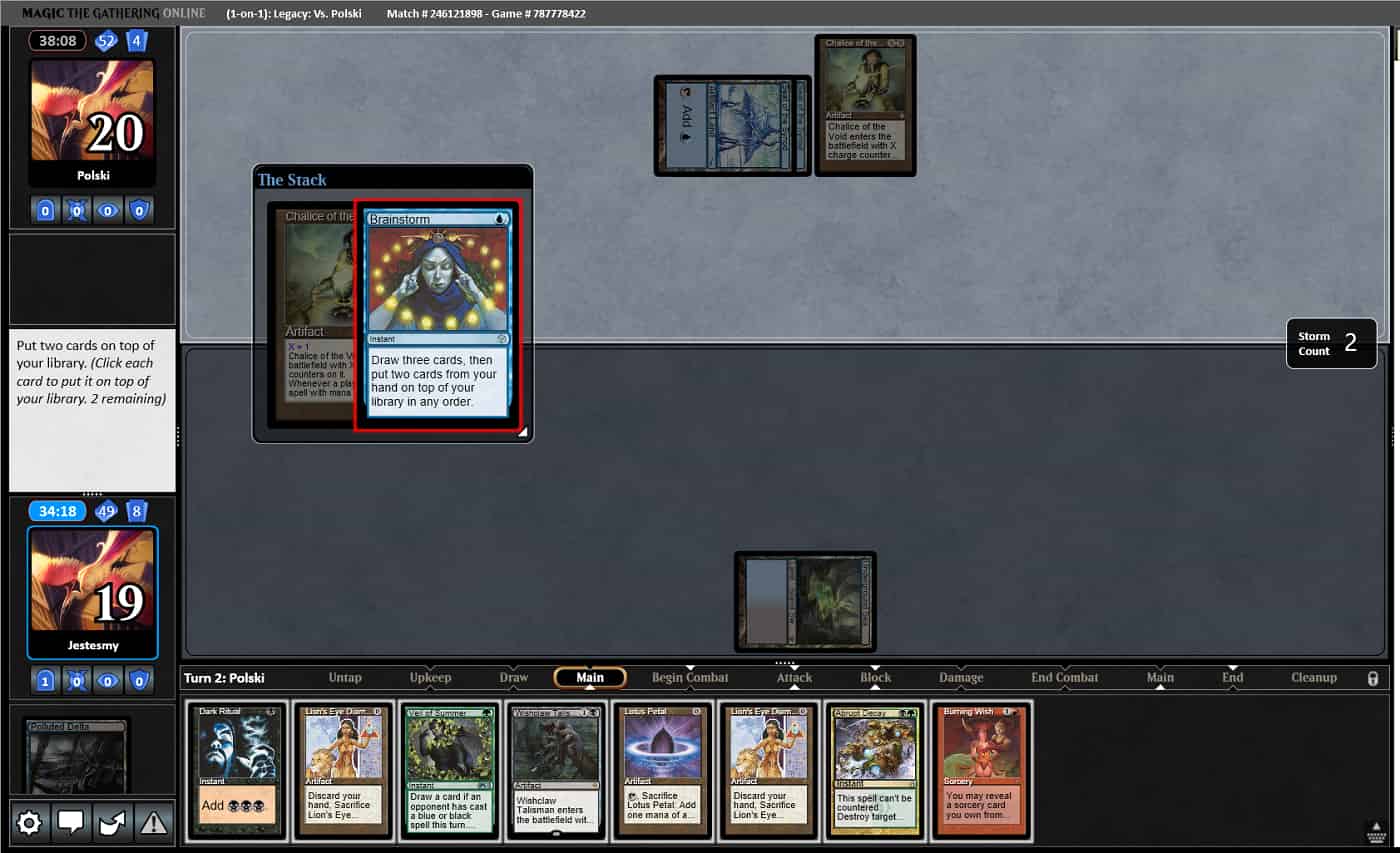 During the two turns of drawing the same cards I put back, my opponent played several creatures and was putting on some pressure. I had one more draw step to try and draw a land, but unfortunately, it was [[Dark Ritual]] and I conceded. 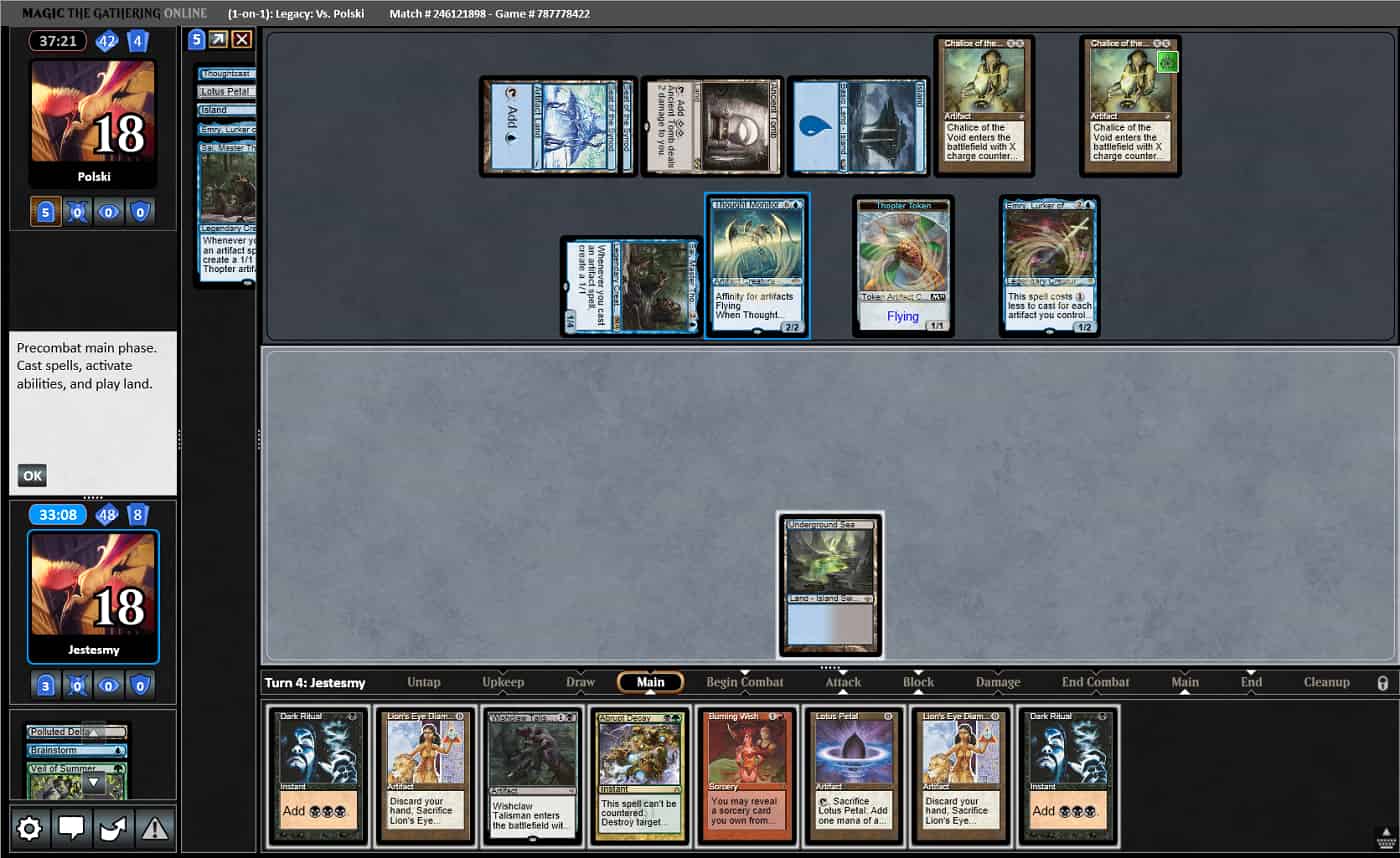 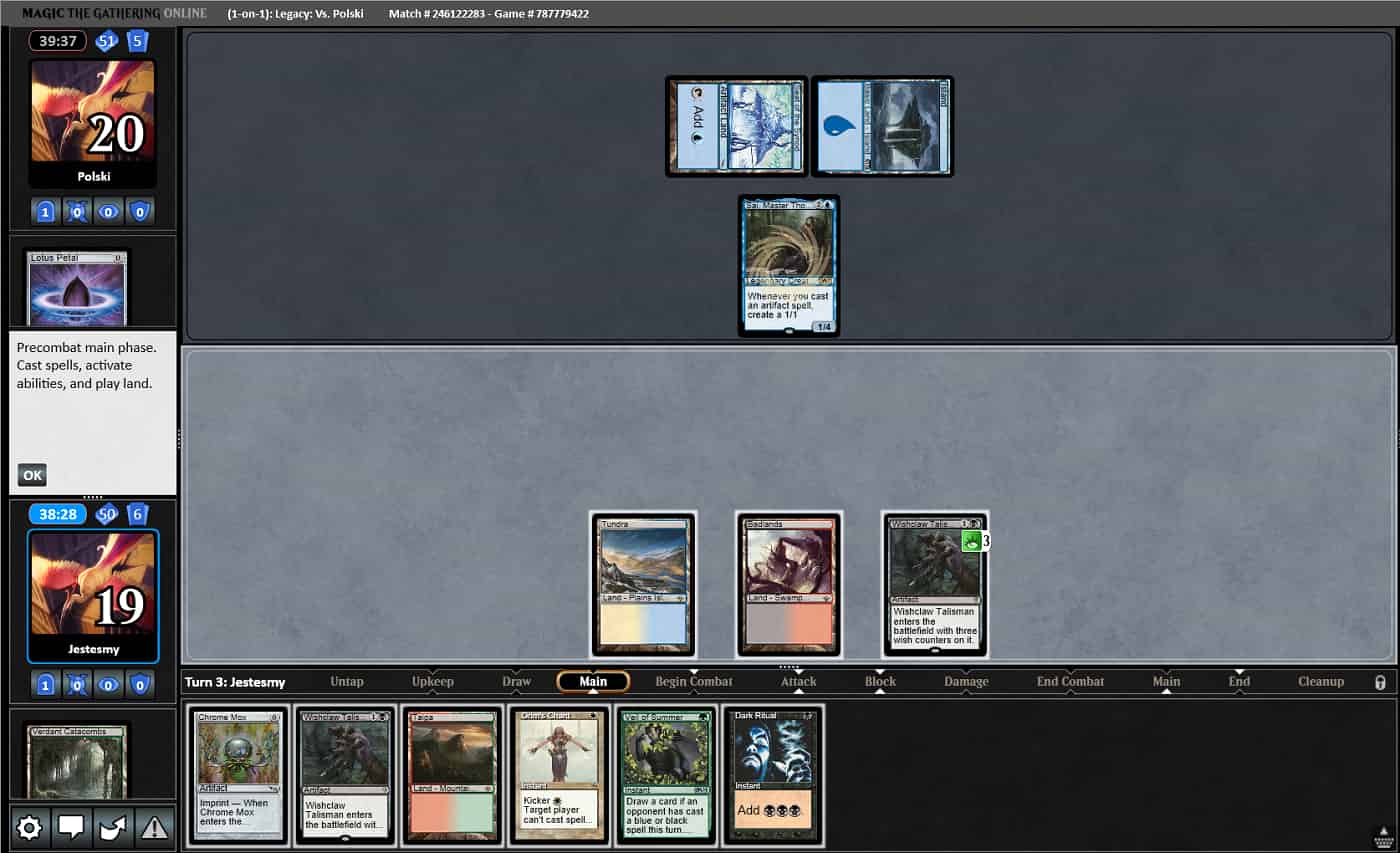 On my third turn, I drew a [[Dark Ritual]]. I now had access to six mana, which was enough to search for and cast [[Ad Nauseam]], but not with any protection. I thought the opponent would have a counterspell, so I didn’t want to go for that line. Instead, I decided to search for [[Ad Nauseam]] and give the opponent the [[Wishclaw Talisman]] and then [[Orim’s Chant]] on their upkeep. This will prevent the opponent from casting anything they drew for their turn or what they would tutor for. 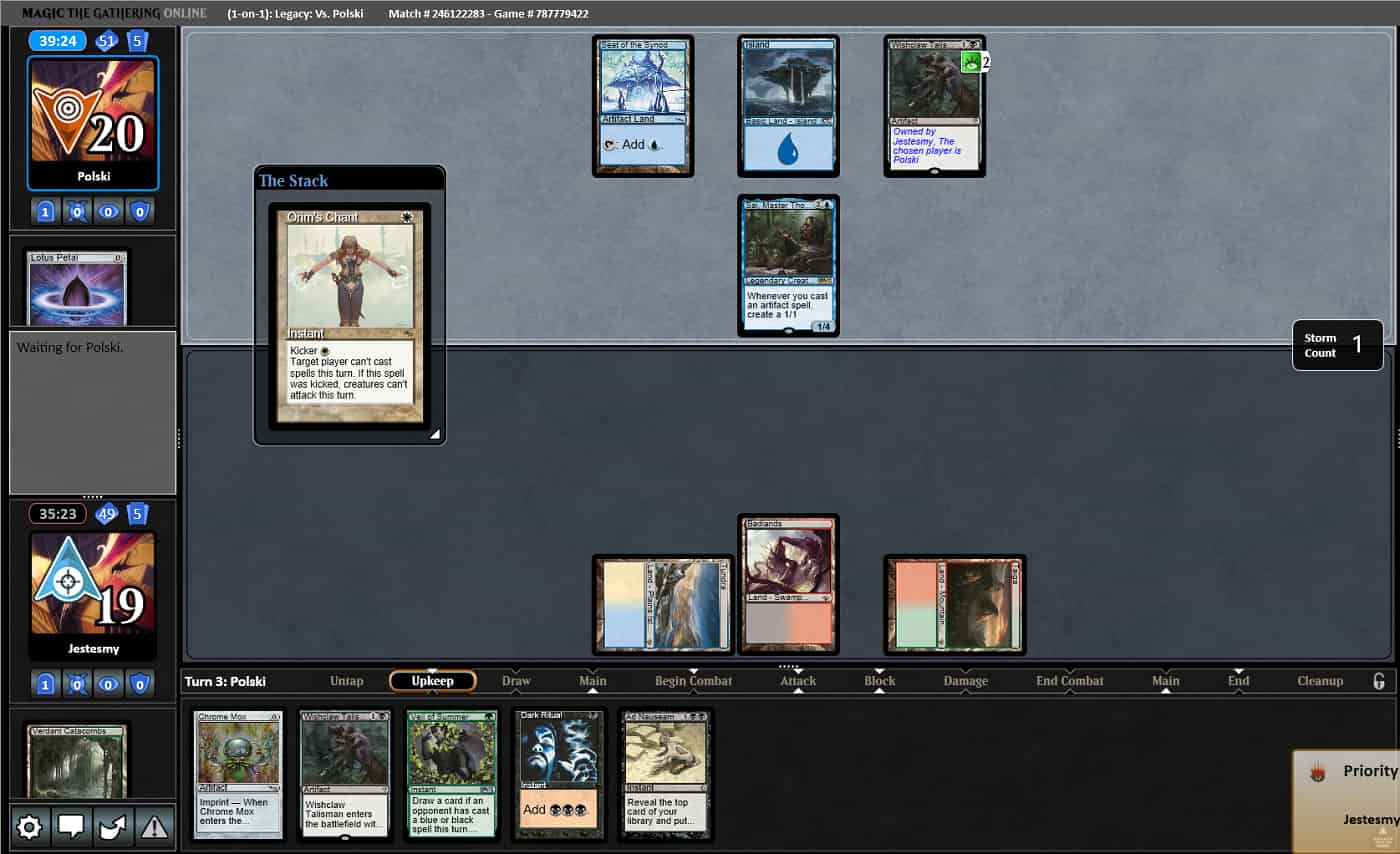 The opponent then just played a land and passed the turn without activating [[Wishclaw Talisman]]. I drew another [[Orim’s Chant]]. Now, I could cast [[Ad Nauseam]] with protection, so I led off by casting the [[Orim’s Chant]]. It was immediately countered by the [[Force of Will]] I was expecting. 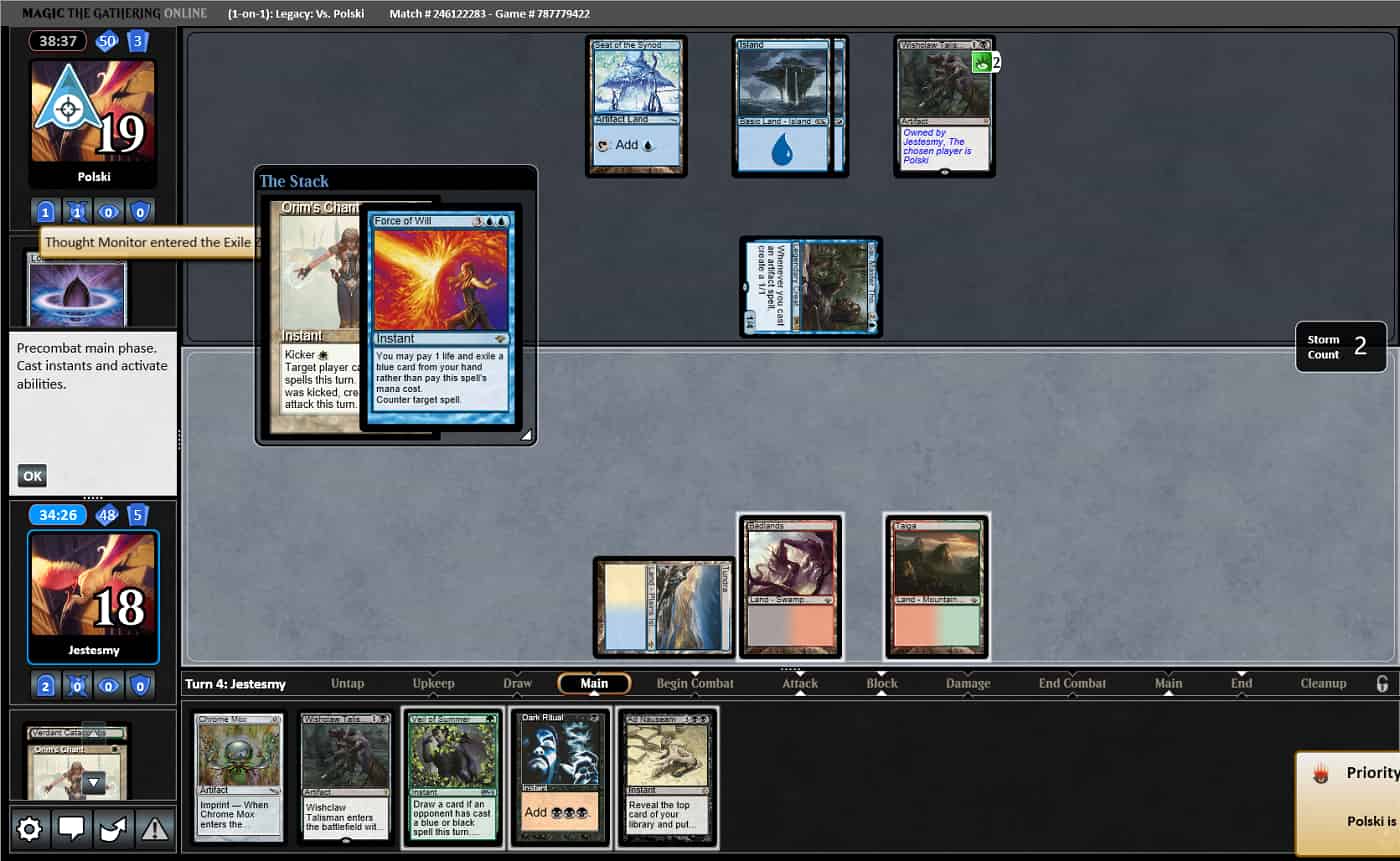 From there, it was an easy combo off casting the rituals into [[Ad Nauseam]] with 18 life, which was more than enough to draw enough cards to win the game. 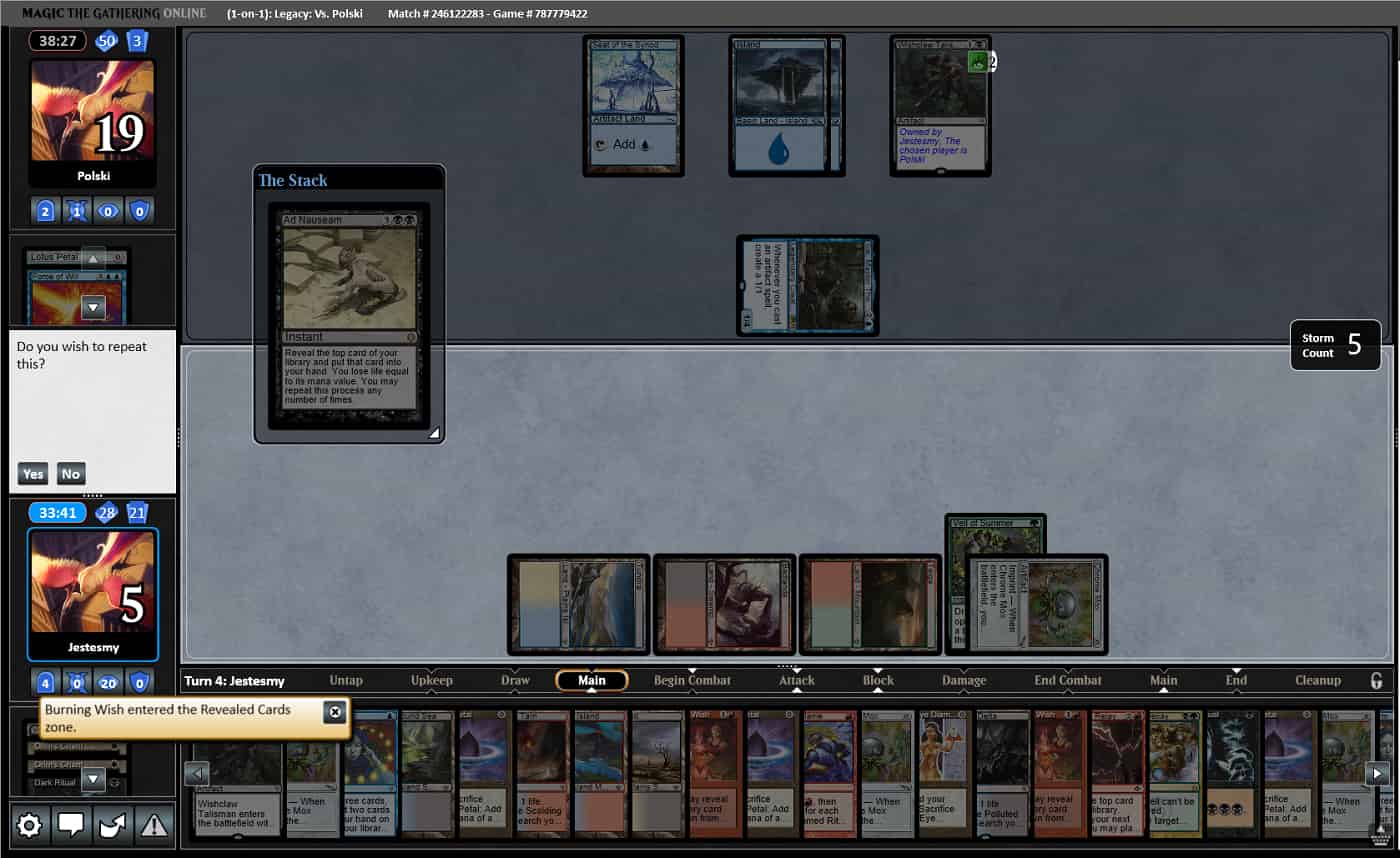 8-Cast is a really interesting deck that I was excited to learn more about and playtest against. I’m not sure how long it will be around in Legacy though, because these style of decks tend to evolve pretty quickly. I do think, however, this version can hold its own in the metagame. I hope you enjoyed this article, can take some of the lessons learned, and apply them to your own playtesting.