Ad Nauseam Tendrils is a deck like TES trying to win with the Storm mechanic using [[Tendrils of Agony]]. The main difference is Ad Nauseam Tendrils is built to be a little slower of a deck, using cards like [[Cabal Ritual]] and [[Past in Flames]], to play into the later turns of a game. It still has the potential of a turn one or early combo, but just not as frequently as TES, in favor of a better late game. Over the years, it has been the most popular storm variant, so this matchup is one we want to be prepared for.

How does Ad Nauseam Tendrils matchup against TES?

[[Thoughtseize]], [[Duress]] – While TES used to play the same discard suite, we have since moved to [[Veil of Summer]] and [[Defense Grid]], but Ad Nauseam Tendrils is playing discard. This means our hand will be vulnerable until the turn we are ready to combo. Discard spells can be used to take protection, like [[Veil of Summer]], or a key combo piece to delay our ability to win.

From TES perspective, this matchup is all about speed and keeping hands resilient to discard spells. Our only way to protect ourselves against their combo is [[Veil of Summer]]. We need to focus on our own game plan and keeping opening hands that are faster than the Ad Nauseam Tendrils hand. Their main disruption is discard so having a [[Veil of Summer]] in hand or using cantrips to float our important cards on the top of our library until the turn we combo off is important to winning this matchup.

We do not have anything in our sideboard to improve our matchup. Our main deck is our best configuration to combo quickly and beat the interaction from the opponent.

To start the first game, my opponent won the die roll and chose to be on the play. We both mulliganed to six, and I kept a hand with two lands, two rituals, and two copies of [[Brainstorm]]. I thought this hand would be great against discard spells, had the potential for a fast combo, and ultimately, was better than a random five cards. My opponent led off with a turn-one [[Preordain]] into a turn-two [[Duress]]. For my first turn, I drew the [[Ad Nauseam]] and decided to cast a [[Brainstorm]] in response to the [[Duress]]. 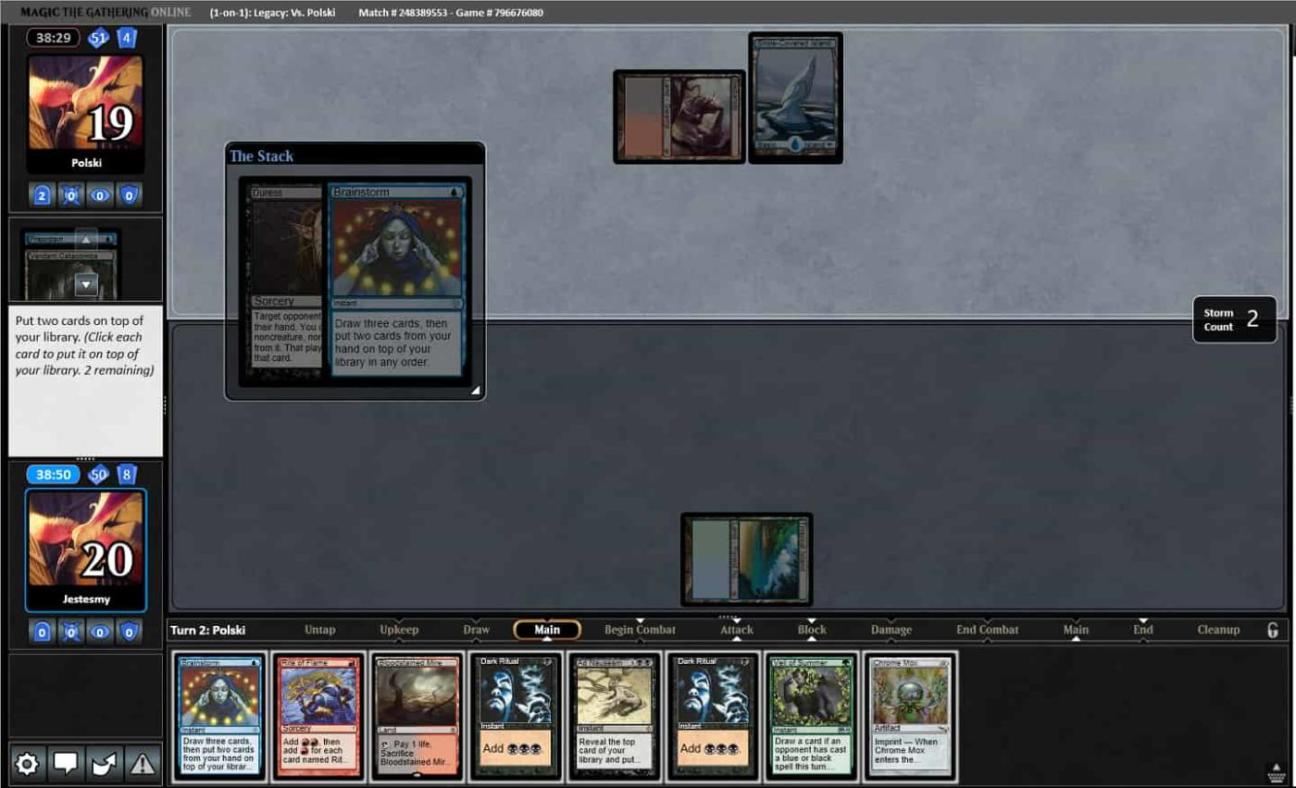 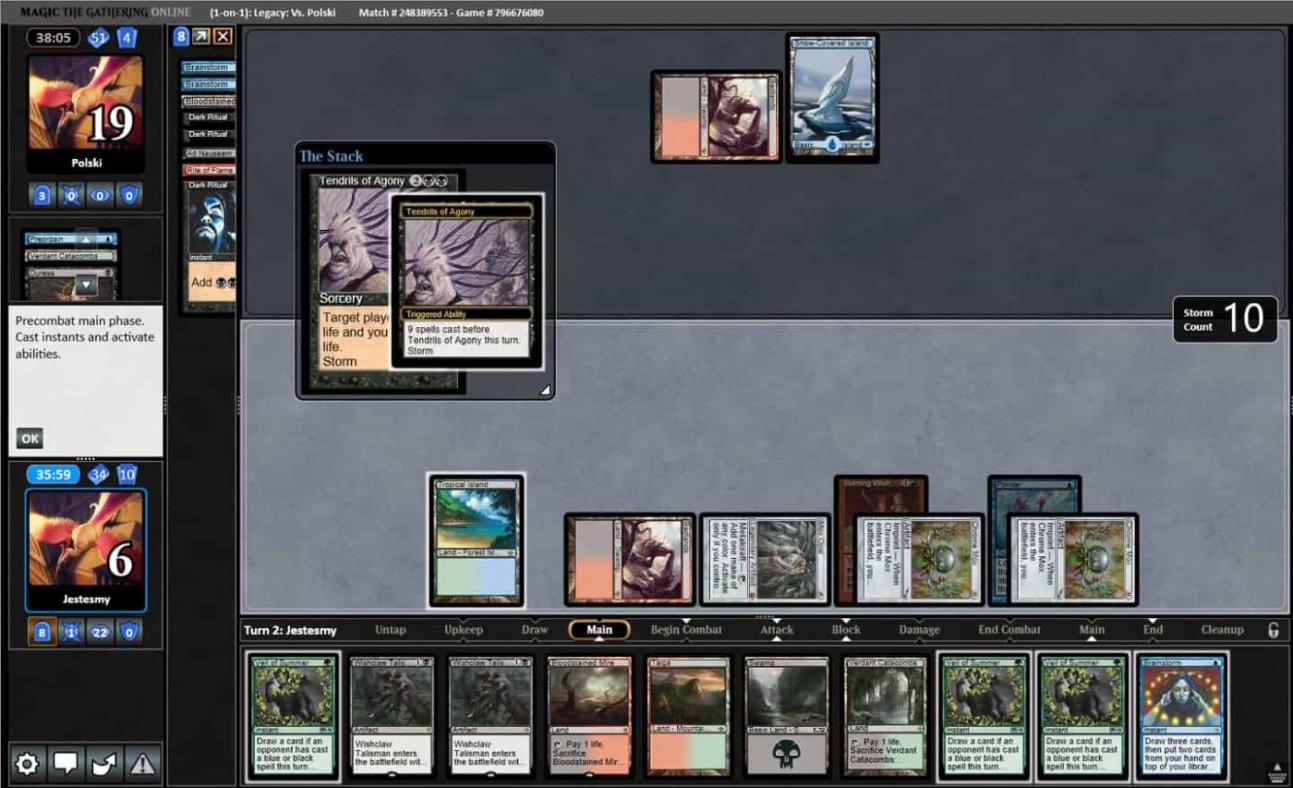 I didn’t sideboard and went into game two on the draw. I kept a hand that was weak to discard, but had a fast combo potential and I don’t like to mulligan against discard decks, so I decided to keep. My hand had a [[Burning Wish]], a land, and several artifact mana and rituals. My opponent started the game with a turn one [[Duress]] taking the [[Burning Wish]]. 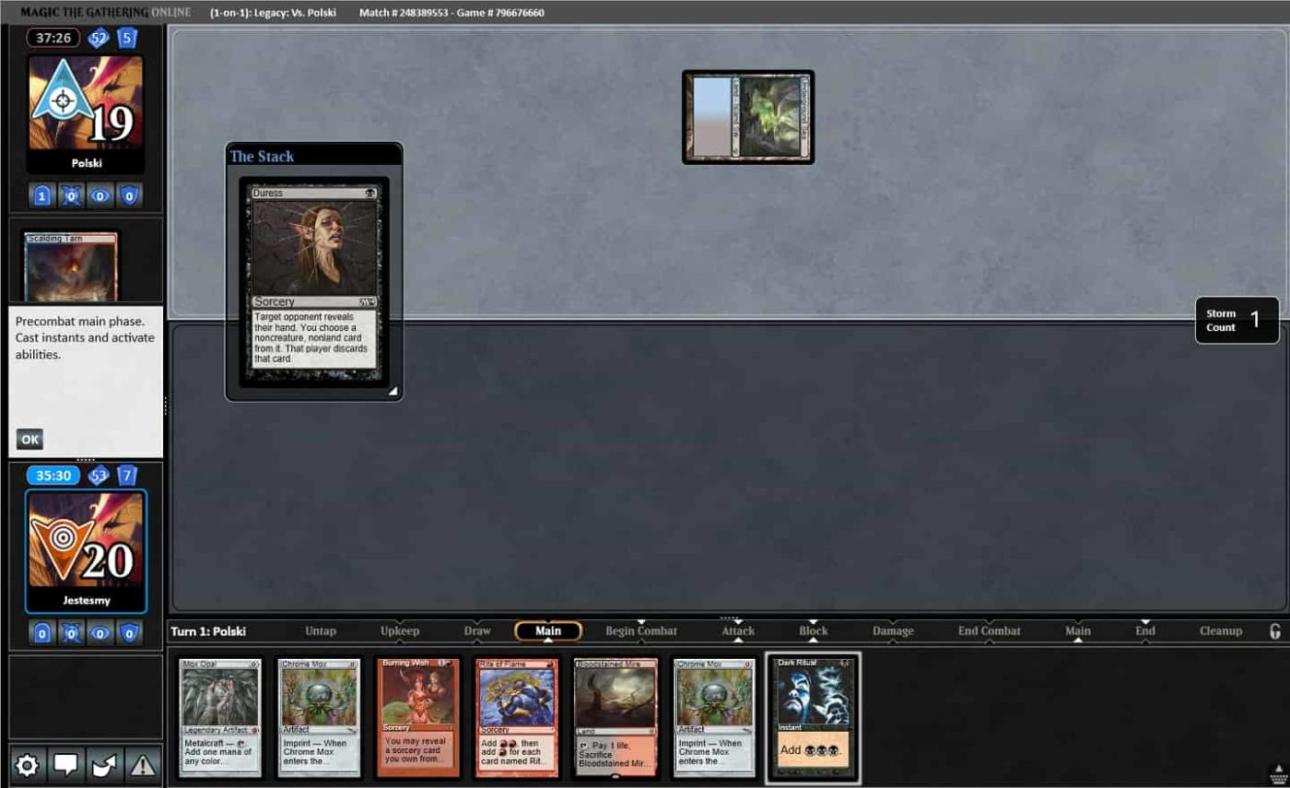 I drew a second land for my turn and just passed the turn back. My opponent used their second turn to cast a [[Wishclaw Talisman]]. I needed to draw a way to combo on my next turn, and I did with [[Burning Wish]]. 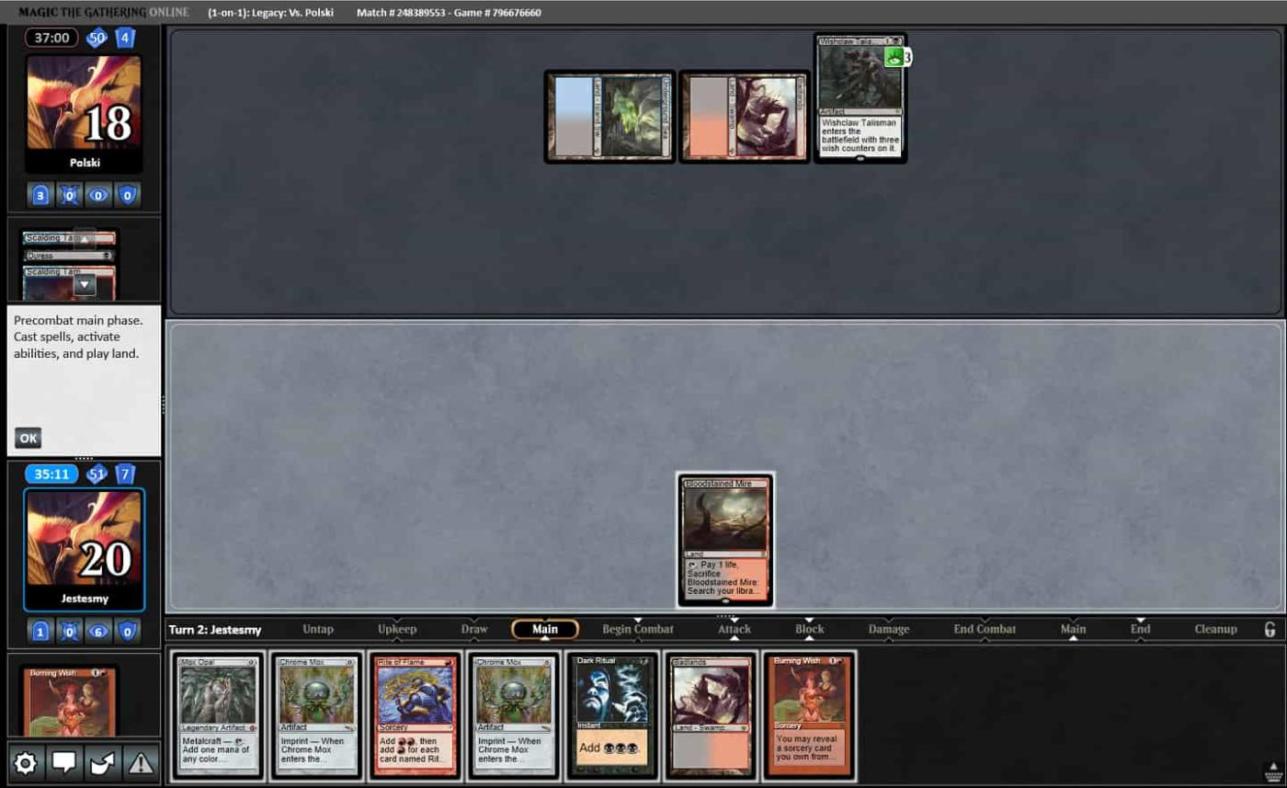 It was just enough mana to [[Burning Wish]] for [[Galvanic Relay]] with seven Storm. The seven cards in exile were perfect to combo on my next turn, but I just needed to survive. 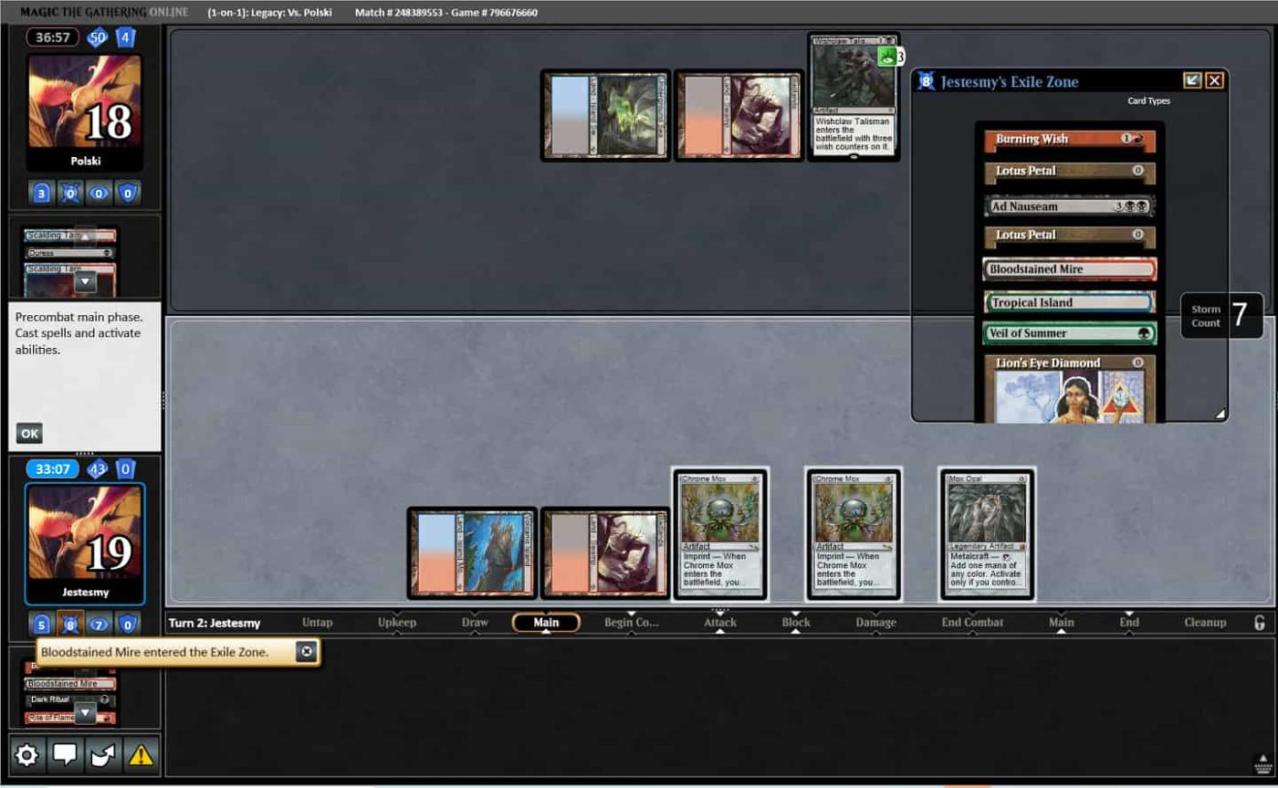 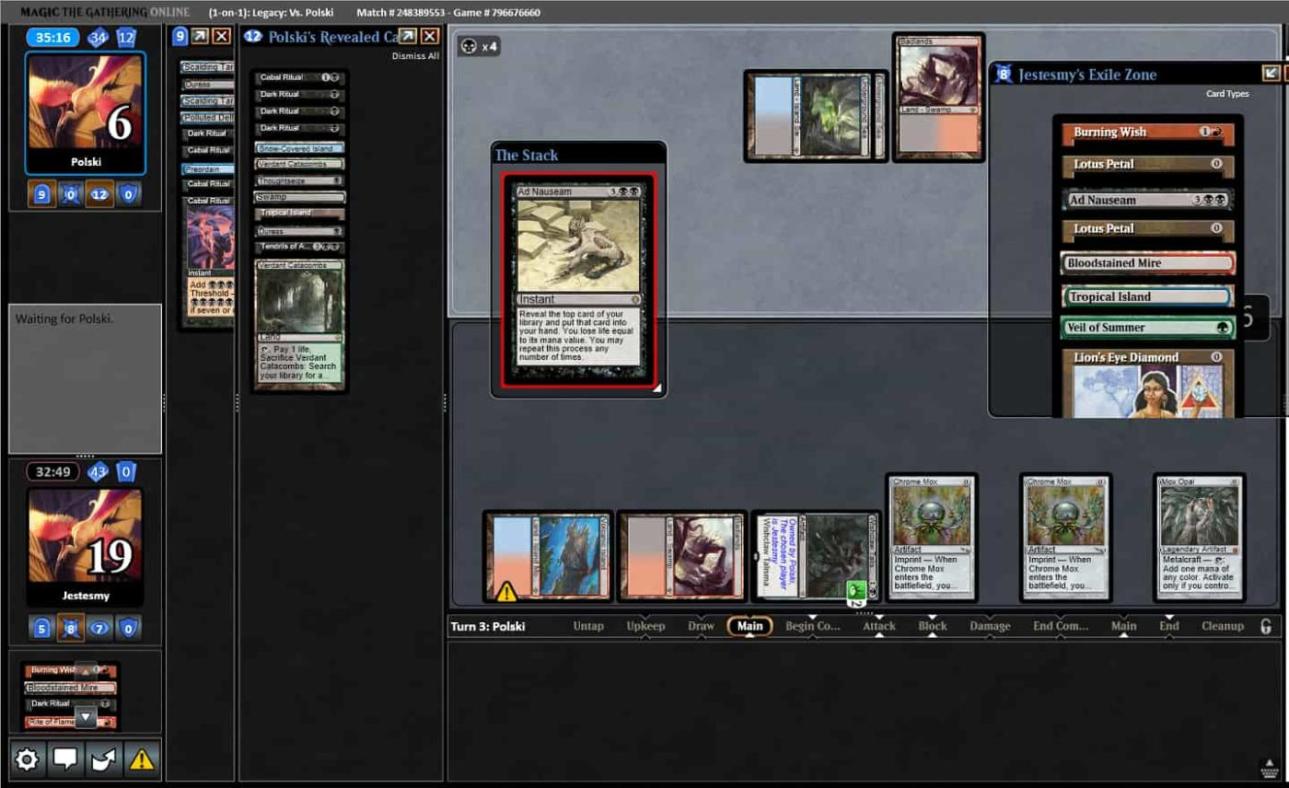 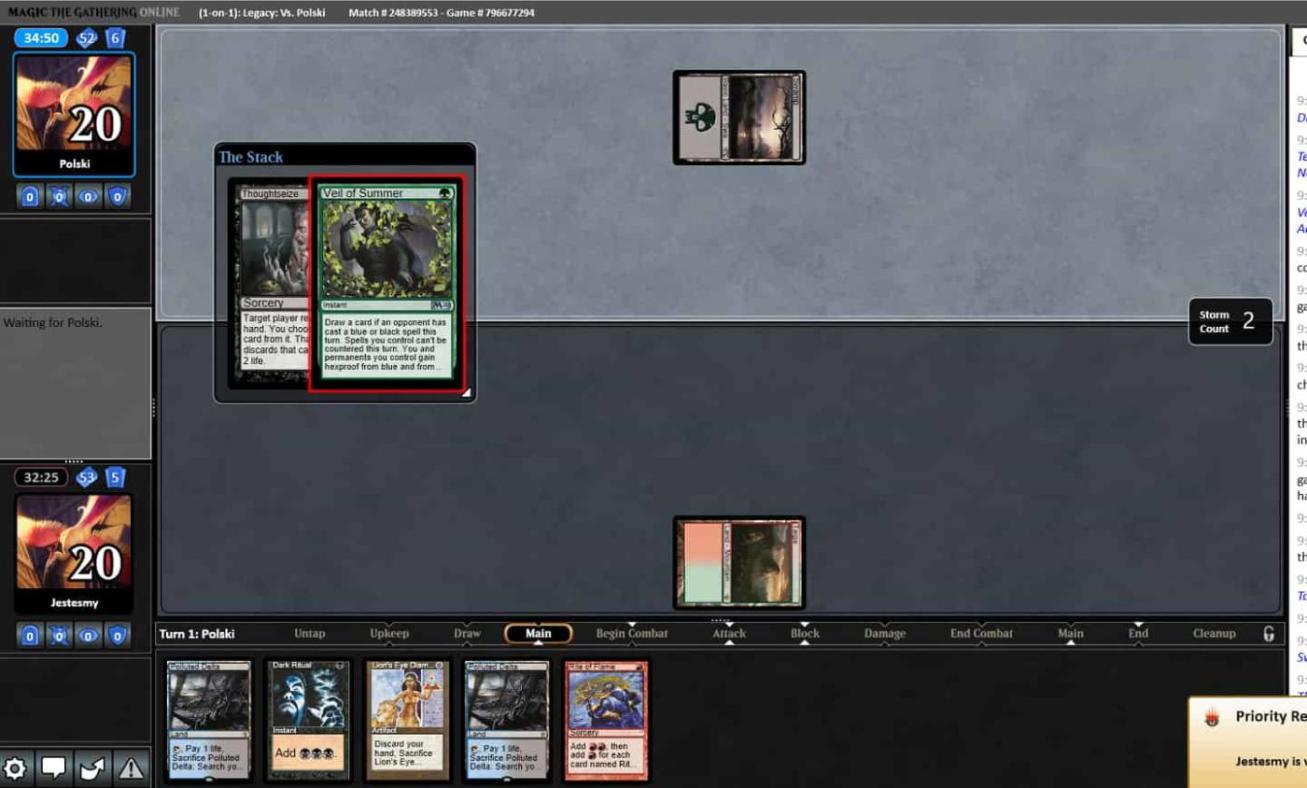 Having only mana left, I needed to draw something on my turn to combo off or there was a chance my opponent could have more disruption or just win the game on their next turn. I had an opening. I took my second turn and drew [[Ad Nauseam]].

Drawing the perfect cards, having the mana to cast it, and being at 20 life it was pretty easy to win from there.


This match went about as I expected. TES is the faster deck, and as long as we keep hands that reflect that and play around discard spells, we should win this match. In this example game, I demonstrated one way to do that which is by using [[Brainstorm]] in response to discard to protect our key cards, but it can also be done with [[Ponder]]. It often causes the Ad Nauseam Tendrils player to discard the wrong card, and allow us to win on the following turn. I believe there will always be multiple Storm variations that exist in Legacy, so understanding we are not the only one and how we can beat the others will be important to our success in Legacy. I hope you enjoyed this article, can take some of the lessons learned, and apply them to your own playtesting.