Aluren is a creature-based deck trying to abuse [[Aluren]]. They can do this by playing creatures for free and at instant speed to generate card and mana advantage or by winning through a combo. There are two different combinations that win the game with an [[Aluren]] in play. The first is with [[Cavern Harpy]] and [[Ukkima, Stalking Shadow]]. They play a [[Ukkima, Stalking Shadow]] and then the [[Cavern Harpy]] to return the [[Ukkima, Stalking Shadow]]. That will deal two damage and gain two life, then pay one life to return the [[Cavern Harpy]] to their hand. This can be done repeatedly to deal as much damage and gain as much life as they need to win the game. The second combo only requires one card, and that’s [[Acererak the Archlich]]. When they cast it they can venture into the dungeons of [[Lost Mine of Phandelver]] and return it to hand. They can do this repeatedly to venture into the dungeon of [[Lost Mine of Phandelver]] to go through the Dark Pool having each opponent lose one life and gain one life as many times as they need in order to win the game. Both of these combos are powerful and Aluren is a resilient deck because it wins many games without even needing to combo. This makes Aluren a good deck choice and we see it rising in popularity because of these new cards being printed.

How does Aluren matchup against TES?

[[Aluren]], [[Cavern Harpy]], [[Ukkima, Stalking Shadow]], [[Acererak the Archlich]] – These are all the cards that are involved in the combo. When [[Aluren]] is in play it can be hard to break up the combo because the creatures are free and can be played at instant speed.

[[Recruiter of the Guard]], [[Living Wish]], [[Meddling Mage]], [[Collector Ouphe]] – [[Recruiter of the Guard]] and [[Living Wish]] give Aluren the flexibility to tutor for different creatures for the situation they are in. It also makes Aluren consistent at finding the creatures they need. They can find creatures that disrupt the opponent, their combo, or to generate card advantage. For TES, we have to worry about their ability to search for their combo and creatures like [[Meddling Mage]] and [[Collector Ouphe]].

TES’s goal is to try and win by turn three on the play or turn two on the draw. That is what it takes to win before an [[Aluren]]. There is also [[Recruiter of the Guard]] and [[Living Wish]] into a disruptive creature that we should try to race. Going for a combo before these can happen is the key to winning this matchup. Aluren does have access to [[Force of Will]], but with 80 cards and TES playing [[Veil of Summer]] and [[Orim’s Chant]], that is something we can beat fairly easily. Postboard and on the draw it’s a little more acceptable to keep a slower hand if we have some interaction because we can expect the opponent to have something to stop us. Their combo is consistent and hard to break up, so I wouldn’t rely on trying to prevent them from comboing,but rather focus on our combo as quickly as possible and one form of protection to get through their disruption.

Because we are advantaged in the first turns of the game, I probably wouldn’t sideboard at all on the play. The opponent can’t win until turn three and has very few disruptive creatures. They are usually going to need a [[Recruiter of the Guard]] or [[Living Wish]] in order to find one, and four [[Veil of Summer]] and two [[Orim’s Chant]] will also be enough against their counterspells or giving us an additional turn if we need to. On the draw, the opponent has a higher chance of winning before we can, so bringing in some disruption such as [[Abrupt Decay]] is necessary. I would take out some artifact mana because of [[Collector Ouphe]], [[Teferi, Time Raveler]], or other ways of disrupting our permanents.

To start the first game off, I was on the draw and had to mulligan to six cards, but I had lots of mana, a [[Burning Wish]], and [[Veil of Summer]]. This hand had the ability to turn one [[Echo of Eons]] with potential protection. My opponent led off with a [[Windswept Heath]]. For my turn, I drew an [[Orim’s Chant]]. 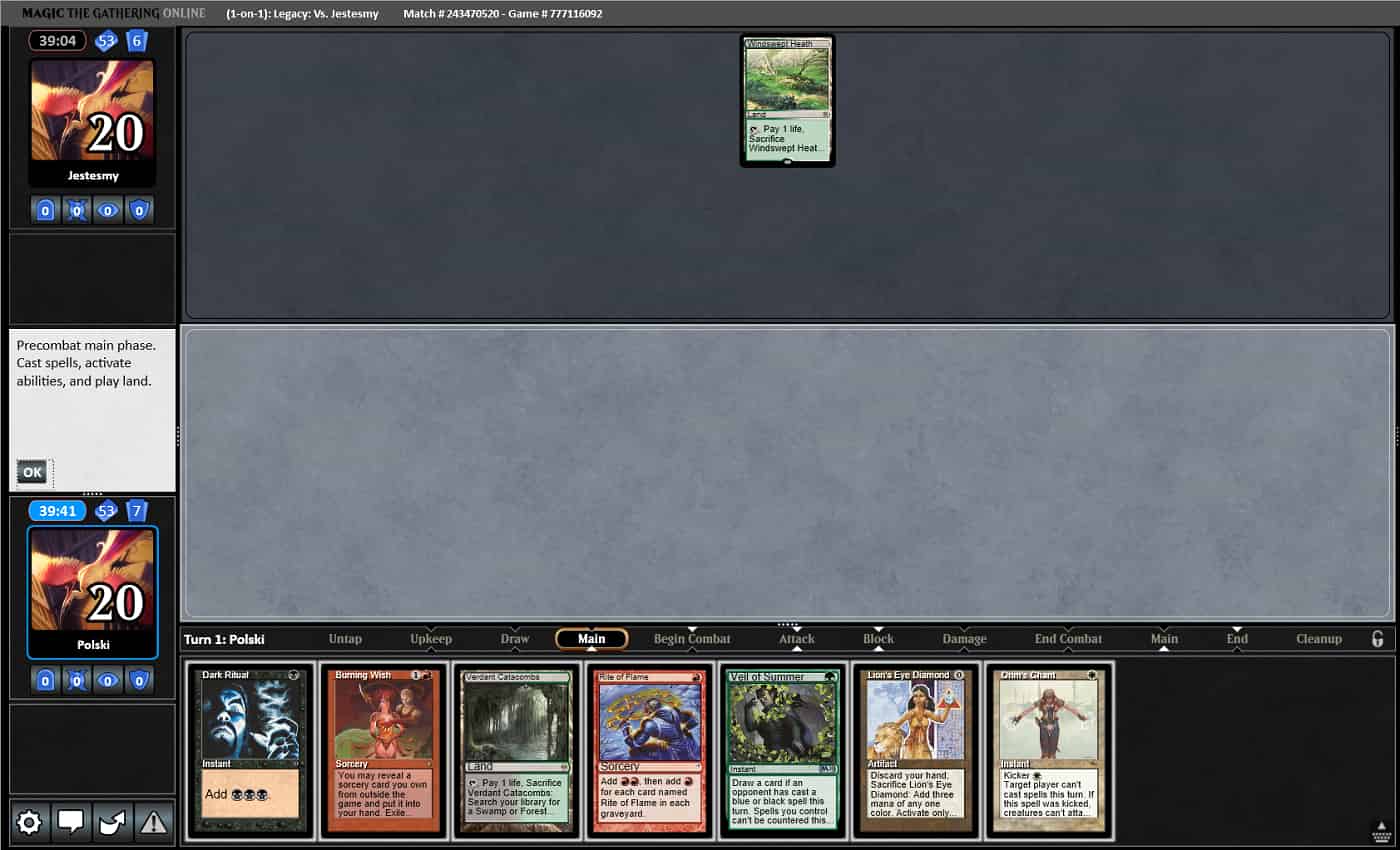 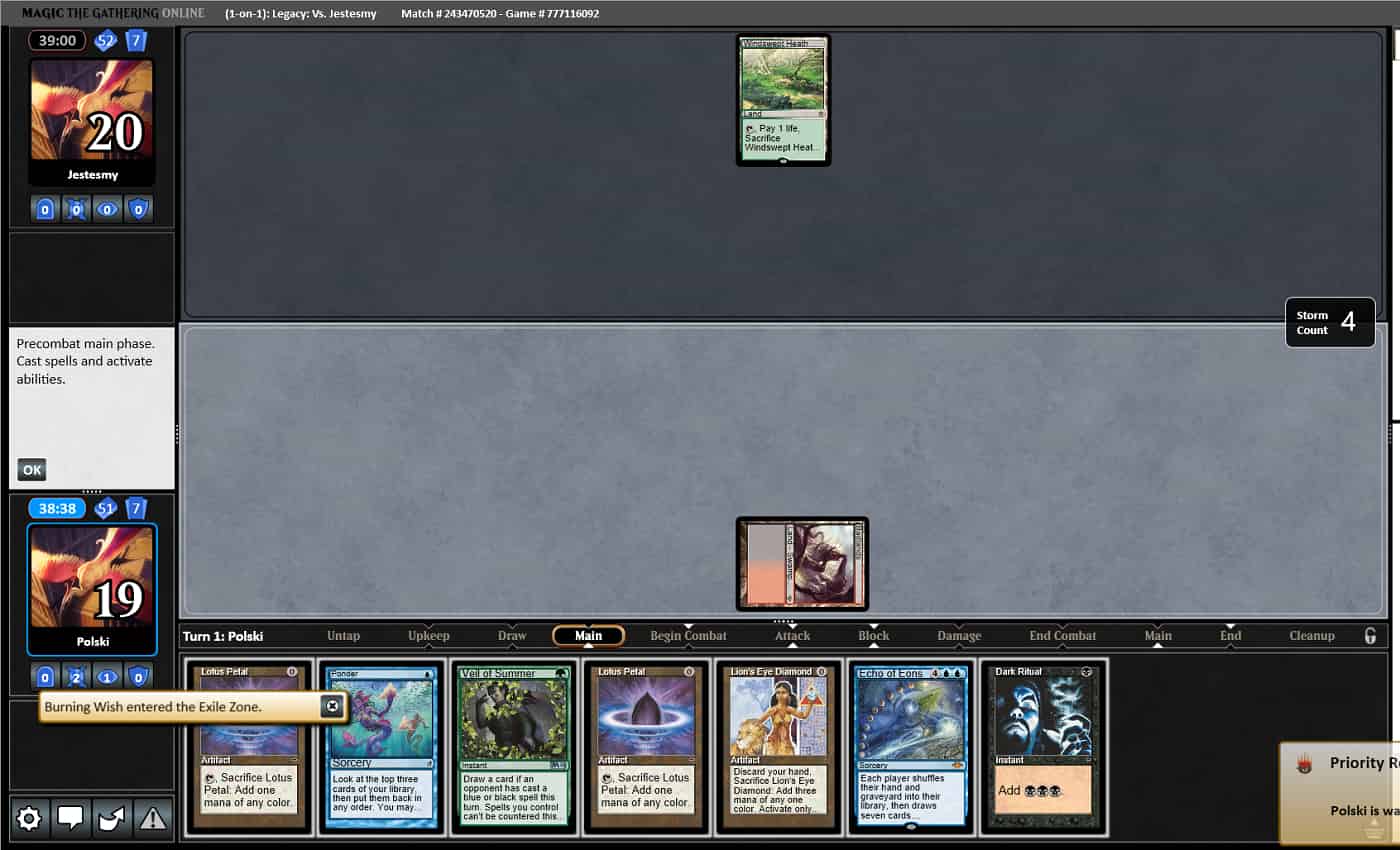 For the second time, my new seven cards had lots of mana, but unfortunately, no tutor or way to win the game. Just a [[Ponder]], I would need to use to find one. I had a blue mana floating, so I used it to cast [[Ponder]] and saw lands and mana, so I had to shuffle and drew [[Orim’s Chant]]. I had to pass the turn. 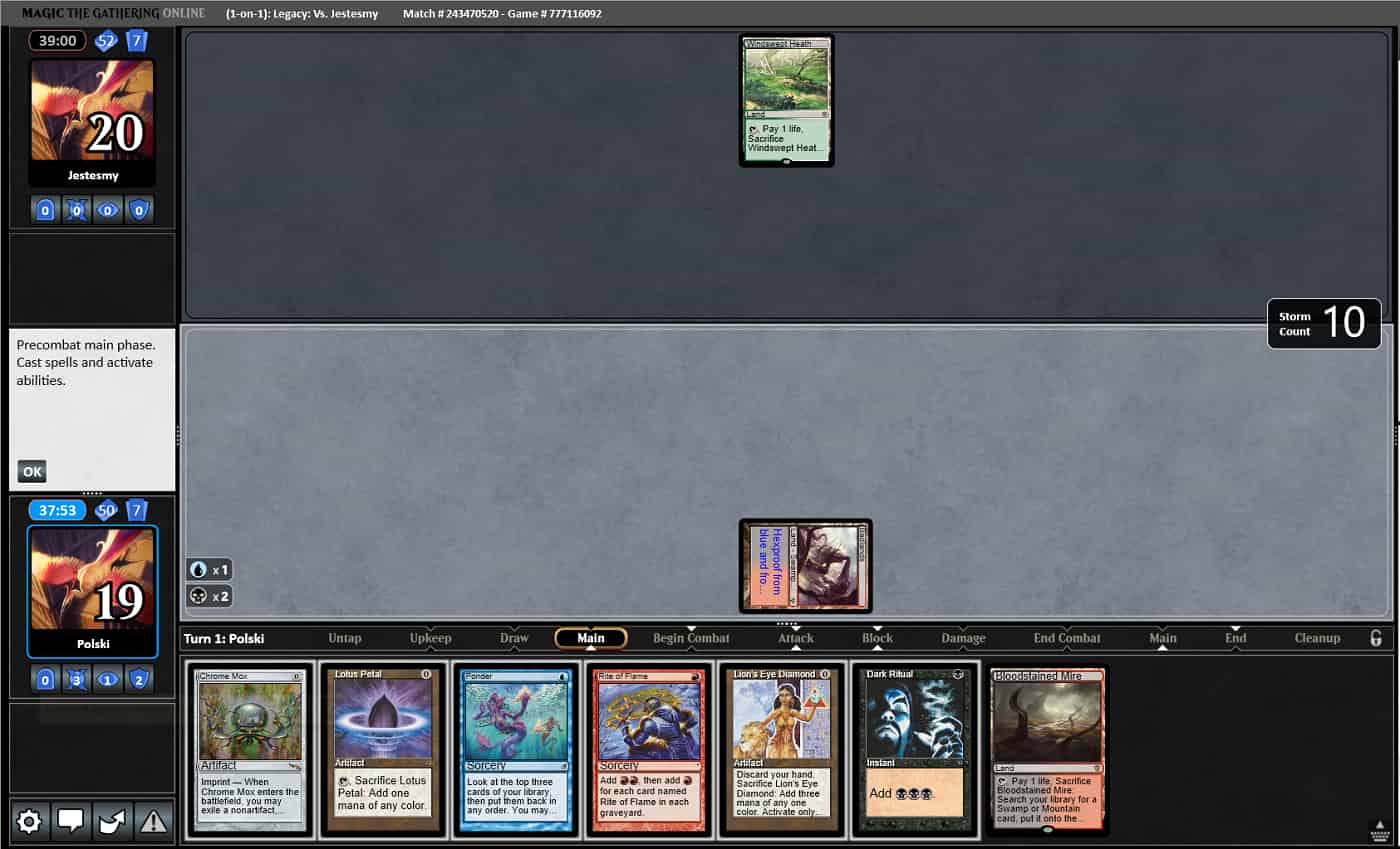 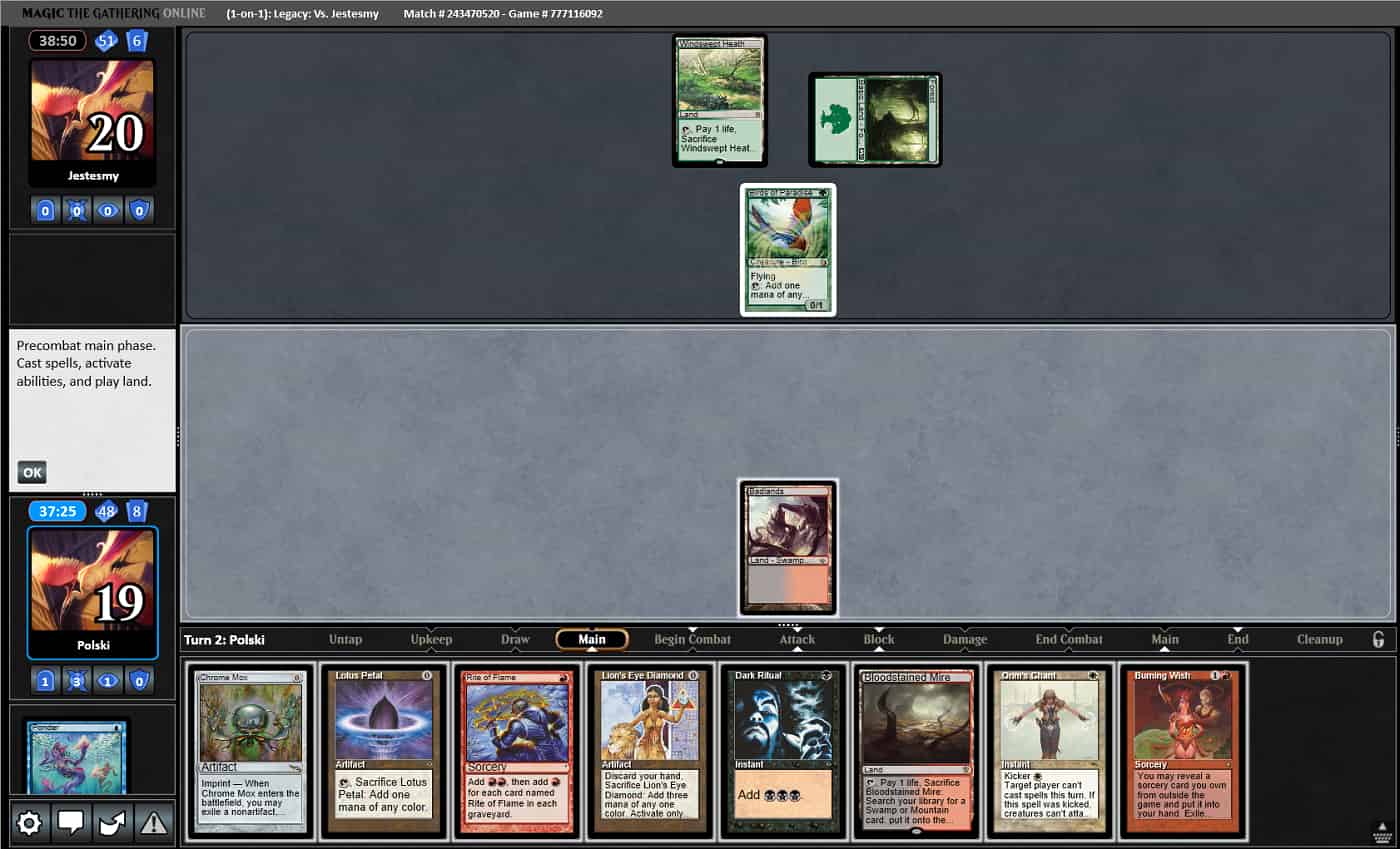 It was probably smarter to just go for [[Peer into the Abyss]] because I think that gives me the highest chance of winning. Dodging a [[Force of Will]] is probably more likely than the opponent not being able to win or deal with the goblin tokens on their next turn, but maybe they did have the [[Force of Will]]. Even though I made a subpar decision, my opponent took their draw step and conceded. 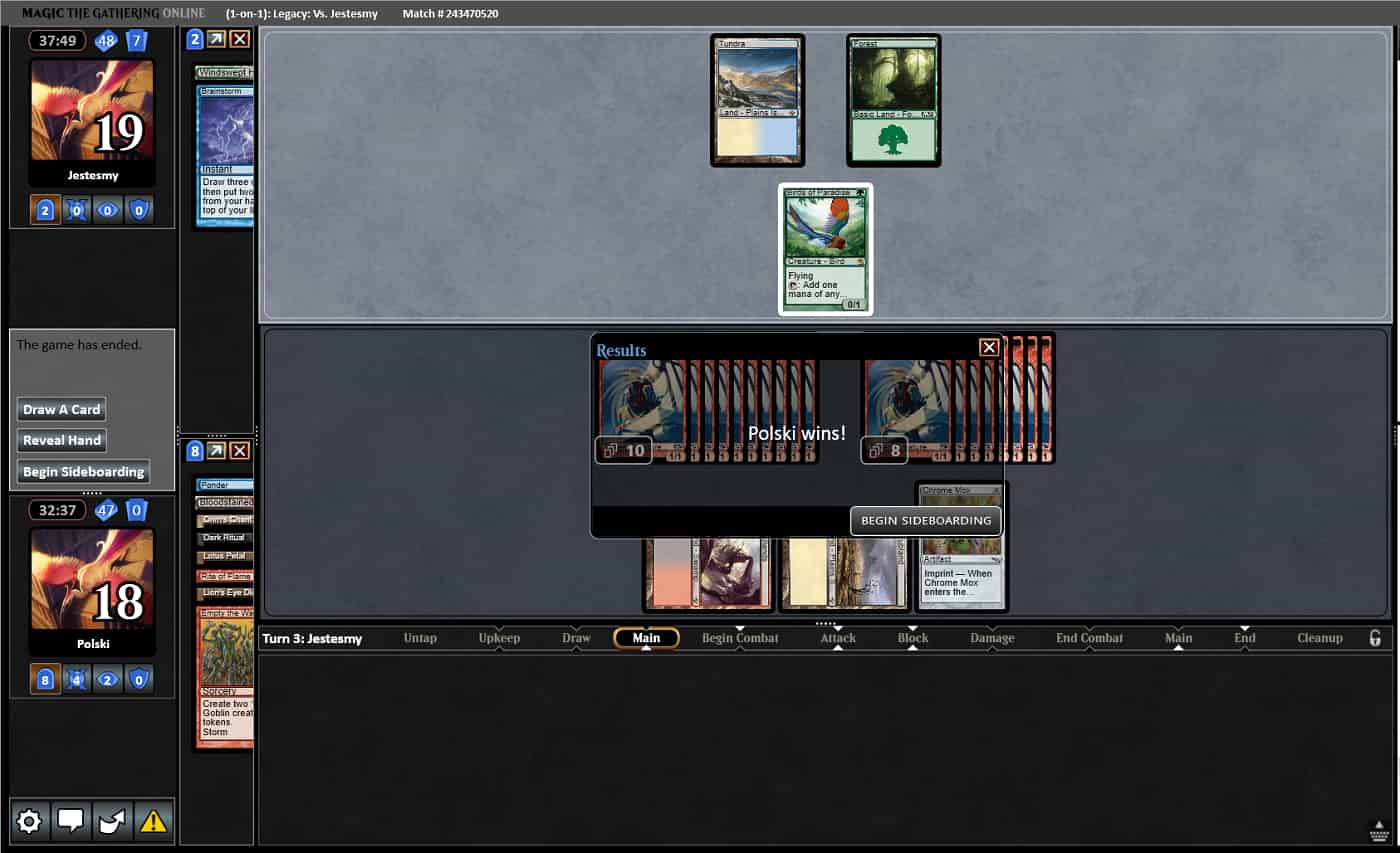 
For the second game, I sideboarded like I recommended and kept my seven card hand. It was another turn one [[Echo of Eons]]. I had three mana to cast and activate [[Wishclaw Talisman]] and a [[Lion’s Eye Diamond]] to pair with the [[Echo of Eons]] I was going to tutor for. If I drew another mana source, I could have cast a [[Veil of Summer]] too. I did end up drawing an additional mana source, but it was a [[Lion’s Eye Diamond]]. That wouldn’t help me cast [[Veil of Summer]], but it would give me an additional mana for after [[Wishclaw Talisman]], so I could cast [[Ad Nauseam]] instead of [[Echo of Eons]]. 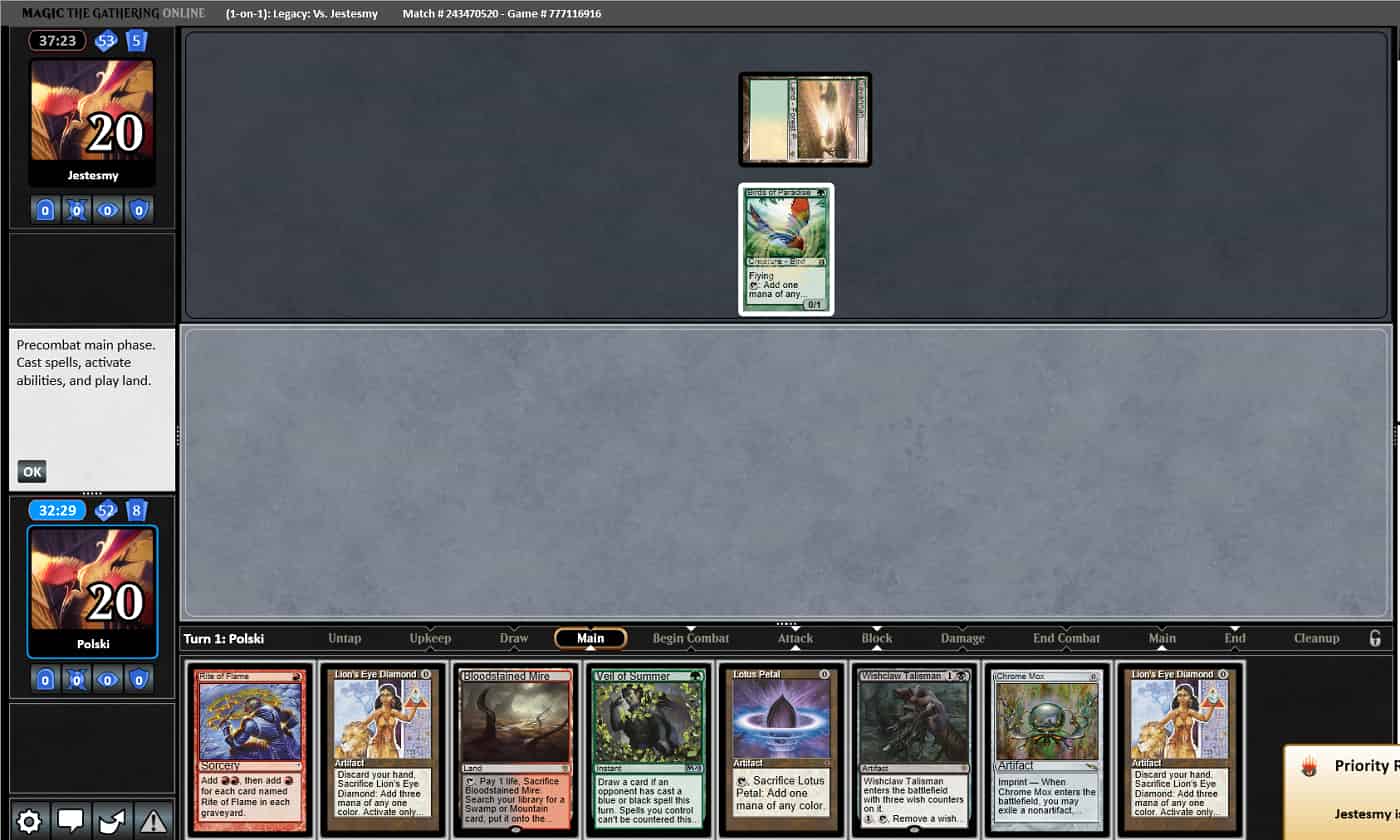 I went with that play hoping to avoid a [[Force of Will]]. Once everything resolved, my [[Ad Nauseam]] was good enough. 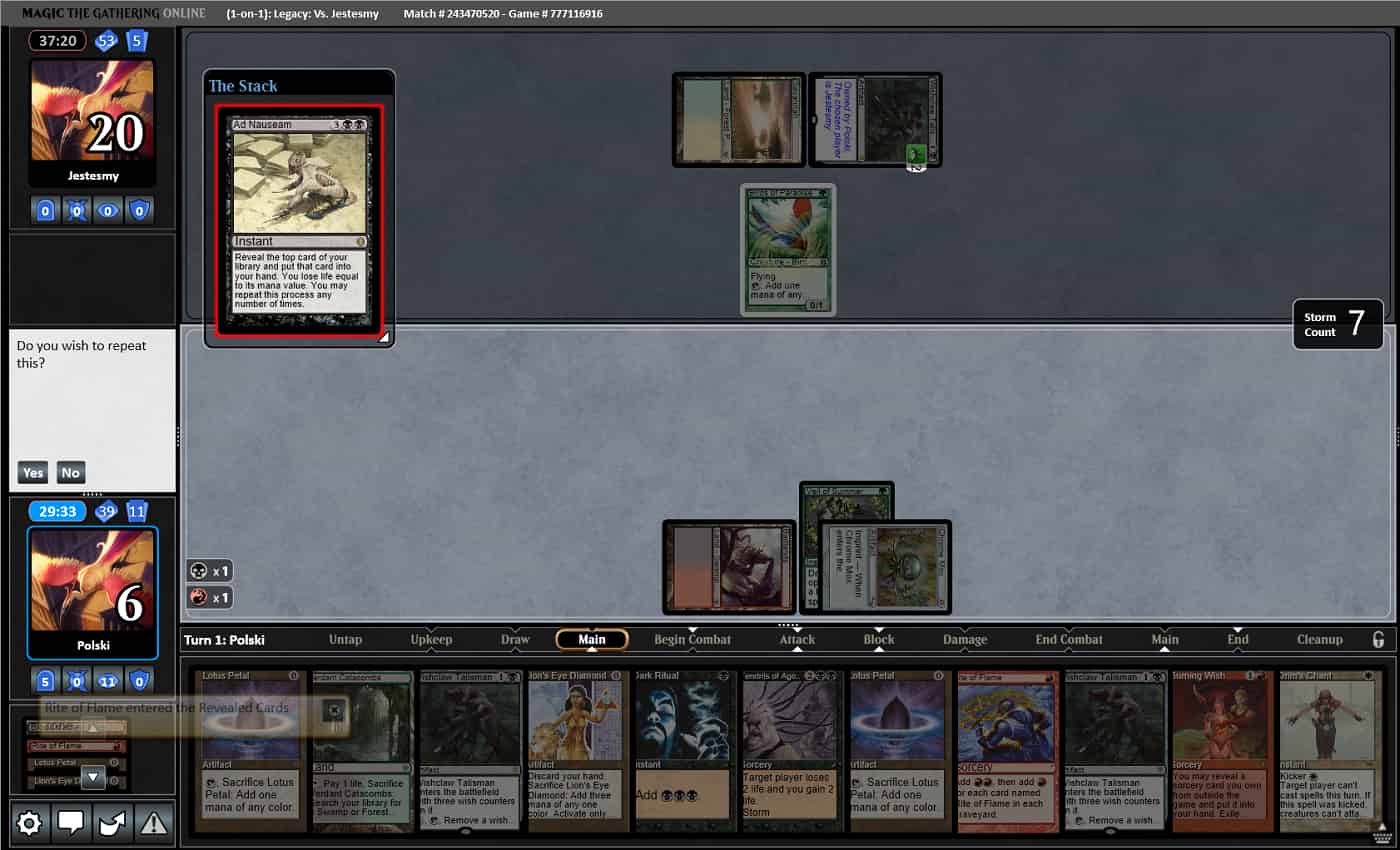 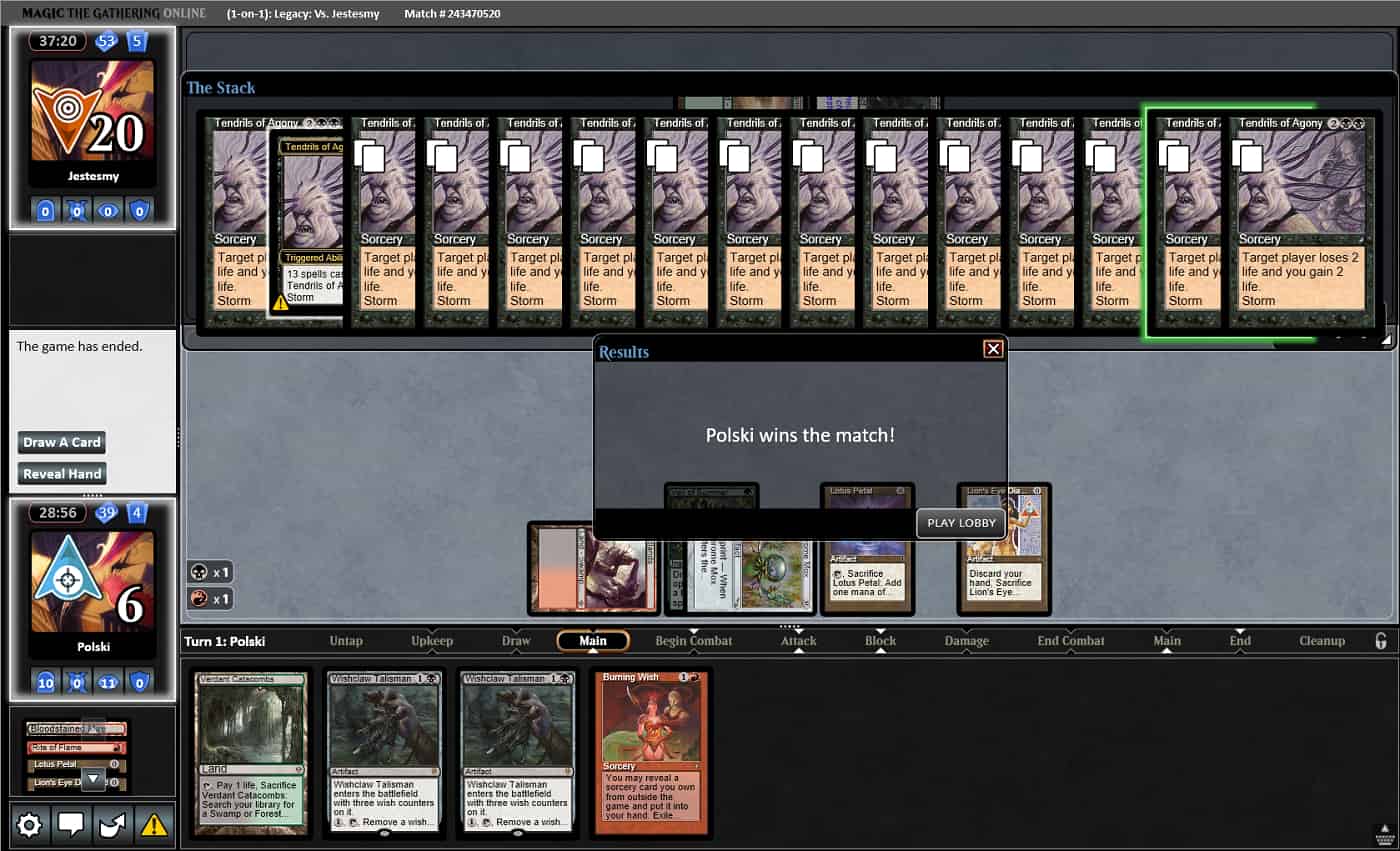 
This matchup can have very lopsided games and usually in favor of TES, which is what we saw in this example match. TES is a heavy favorite in this matchup, especially with [[Orim’s Chant]]. Aluren just isn’t that fast of a deck and many versions lack quick enough disruption or have an 80 card deck and just can’t consistently find the disruption. It usually involves a [[Recruiter of the Guard]] or a [[Living Wish]] and those options just aren’t fast enough. Aluren is at its best in fair matchups, and that’s where it really flexes its power. Over the past few sets, we have seen many new cards be printed that are Legacy playable and enhancing decks, including Aluren. It’s a good reminder that the format is always changing, so we should always be playtesting. I hope you enjoyed this article, can take some of the lessons learned, and apply them to your own playtesting.