Bant Control is an iteration of the previous Snow Control decks that’s using green for cards like [[Uro, Titan of Nature’s Wrath]], [[Endurance]], [[Ice-Fang Coatl]], and other sideboard cards. The recent printing of [[Endurance]] has pushed these previous Snow Control decks from Jeskai or four colors to Bant colors. As other Legacy decks evolve and change, it’s important we continue to test the matchup. With that said, let’s breakdown Bant Control.

How does Bant Control matchup against TES?

[[Force of Will]], [[Force of Negation]] – Bant Control is packed with lots of counterspells and many cantrips to help the player find them. With this many free counterspells, it will be hard for any combo deck to win quickly. The chances of the opponent having access to a free counterspell are very high.

[[Endurance]], [[Prismatic Ending]] – These are two newer cards Bant Control plays. This is relevant against TES because it allows Bant Control to interact with the graveyard and permanents, like our artifacts, in the main deck that they previously lacked. The printing of [[Endurance]] pushes these blue-white control decks towards Bant as opposed to Jeskai or four colors that we may be used to seeing.

[[Terminus]], [[Force of Vigor]], [[Damping Sphere]], [[Null Rod]] – These are some cards that Bant Control could have within their 75. There are potentially other cards as well, but this list just points out a wide variety of cards Bant Control has to combat combo decks. The addition of [[Endurance]] to Bant Control gives them enough green cards to run [[Force of Vigor]] to destroy the artifacts in TES.

TES now has the ability to grind out control decks with [[Galvanic Relay]], so there are four copies in the sideboard. We bring three in and leave one as a [[Burning Wish]] target. [[Aeve, Progenitor Ooze]] is also another action spell that can be hard for the opponent to counter if they are waiting to counter the payoff card. It also tests the opponent on whether they left [[Terminus]] in their deck or not. Like I mentioned in the potential cards section Bant Control may have, there are a ton of different permanents the opponent could bring in from their sideboard. Every list is a little different, and each player plays a different, so [[Abrupt Decay]] is a great catch-all to whatever the opponent may have. Because we are bringing in so many payoff cards, we need to sideboard some out to keep our ratio of cards the same. Now that our deck will be so full of action cards, we don’t need [[Ponder]]. [[Ad Nauseam]] and [[Tendrils of Agony]] are sided out for similar reasons. We don’t need to go for an all-in [[Ad Nauseam]], and we will still have access to [[Tendrils of Agony]] through [[Burning Wish]].

To start the match off, I had to mulligan down to six cards. My opponent was on the play, kept their opening seven, and led off with a [[Ponder]] into a second turn [[Sylvan Library]]. My hand had lots of mana, a [[Burning Wish]], and a [[Veil of Summer]] for protection. On my second turn, I drew another land and I decided to try and combo that turn. 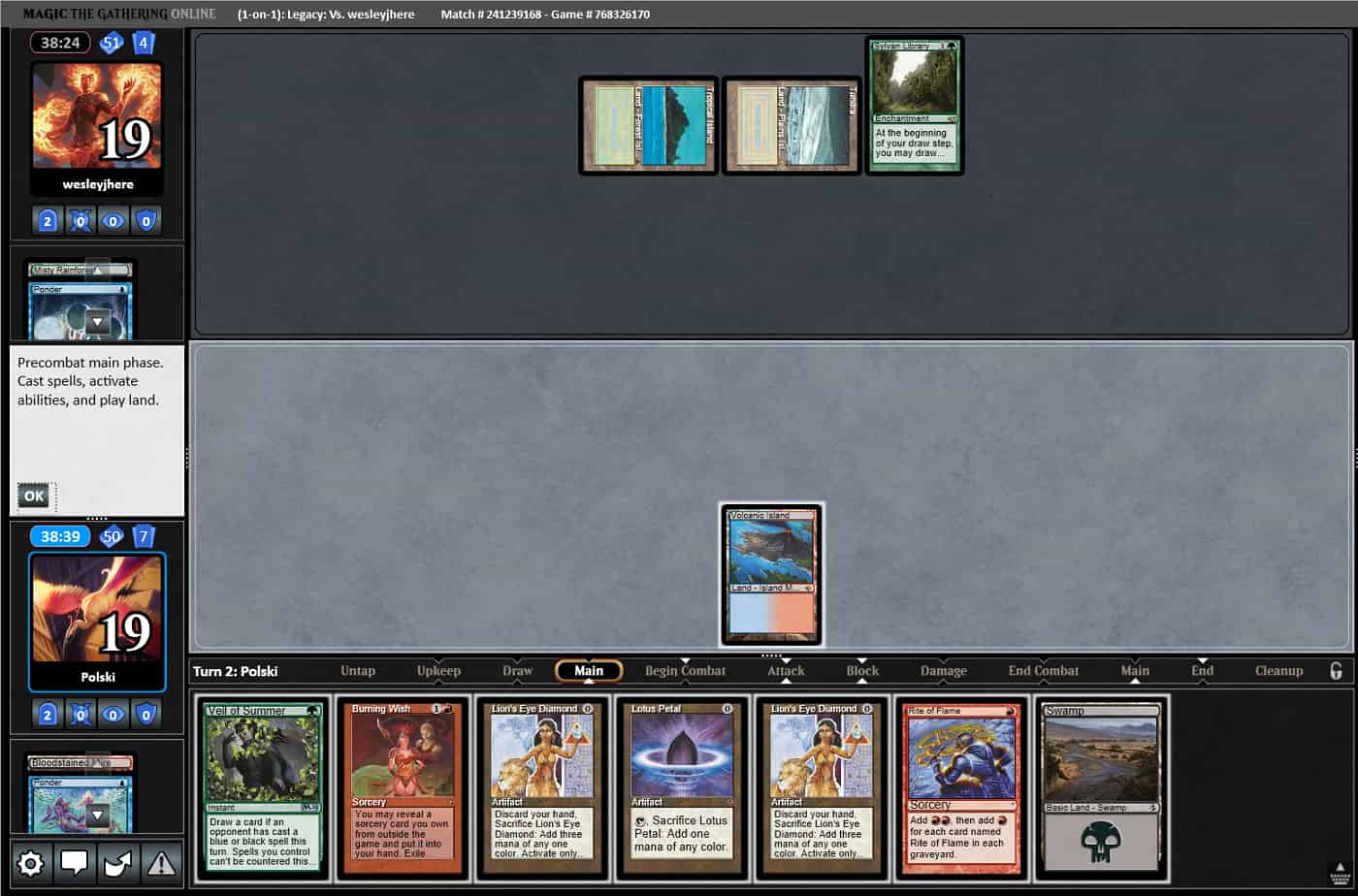 I led off with a [[Veil of Summer]], and it was immediately met by [[Force of Negation]]. I kept going for the combo here because I didn’t want to play around another free counterspell. I decided to play out both copies of [[Lion’s Eye Diamond]] and the [[Rite of Flame]], and then I used [[Burning Wish]] to get [[Echo of Eons]]. Looking back, I realize now that I could have gotten [[Peer into the Abyss]]. For whatever reason, I thought I was short during the game. That may have been the better play. Once [[Echo of Eons]] was in my hand, I sacrificed both copies of [[Lion’s Eye Diamond]] for blue and red to put [[Echo of Eons]] in my graveyard and flash it back. It resolved. 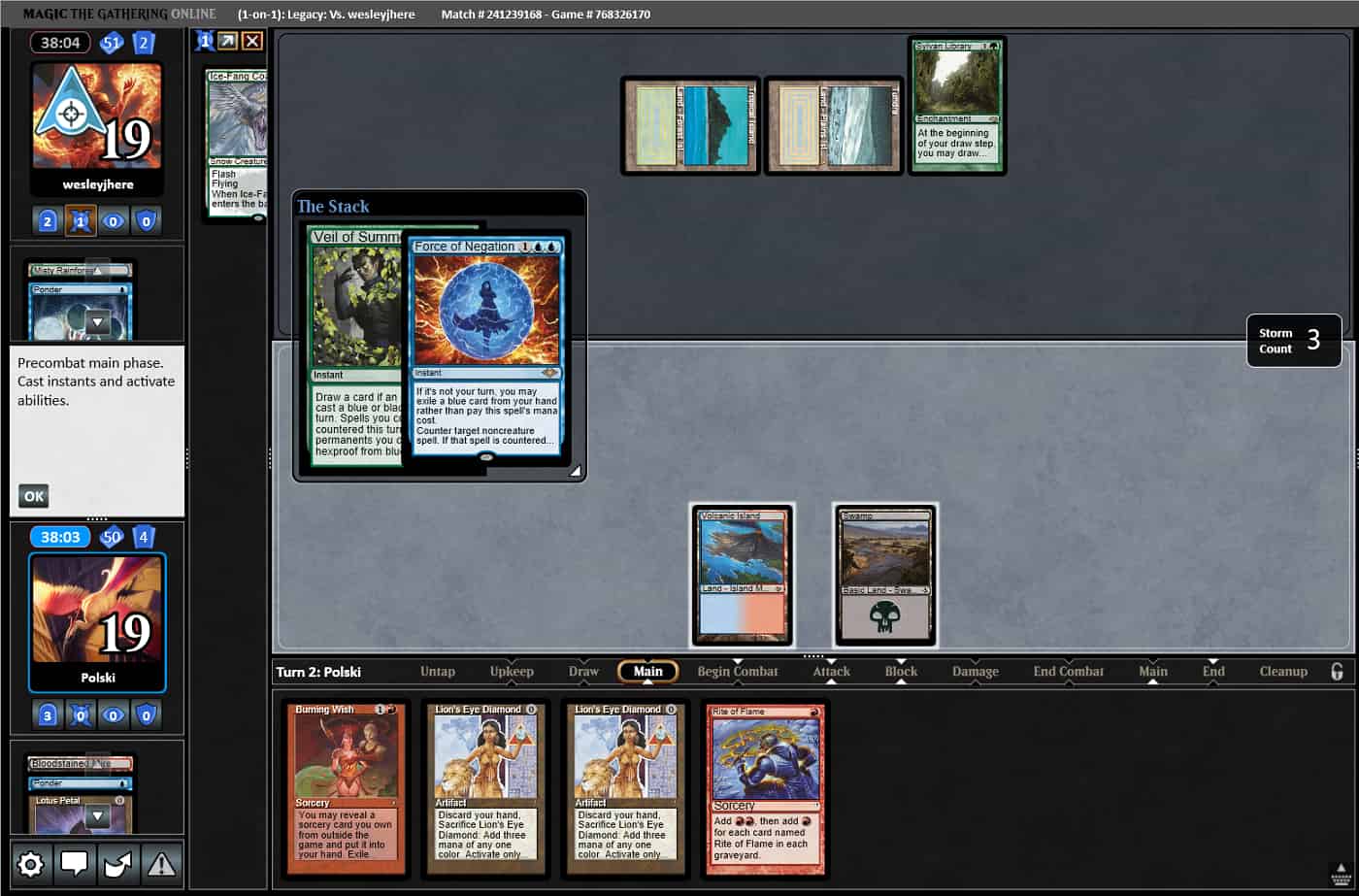 The seven cards I drew were pretty good, but not good enough to win as is. I decided to cast a [[Brainstorm]] to look for more mana or any way to continue. Thankfully, I did find a [[Dark Ritual]] and a [[Chrome Mox]] that would allow me combo this turn. The three floating, two from [[Dark Ritual]], [[Chrome Mox]], and [[Mox Opal]] would give me seven mana. The exact amount needed to [[Wishclaw Talisman]] and search for and cast [[Tendrils of Agony]]. 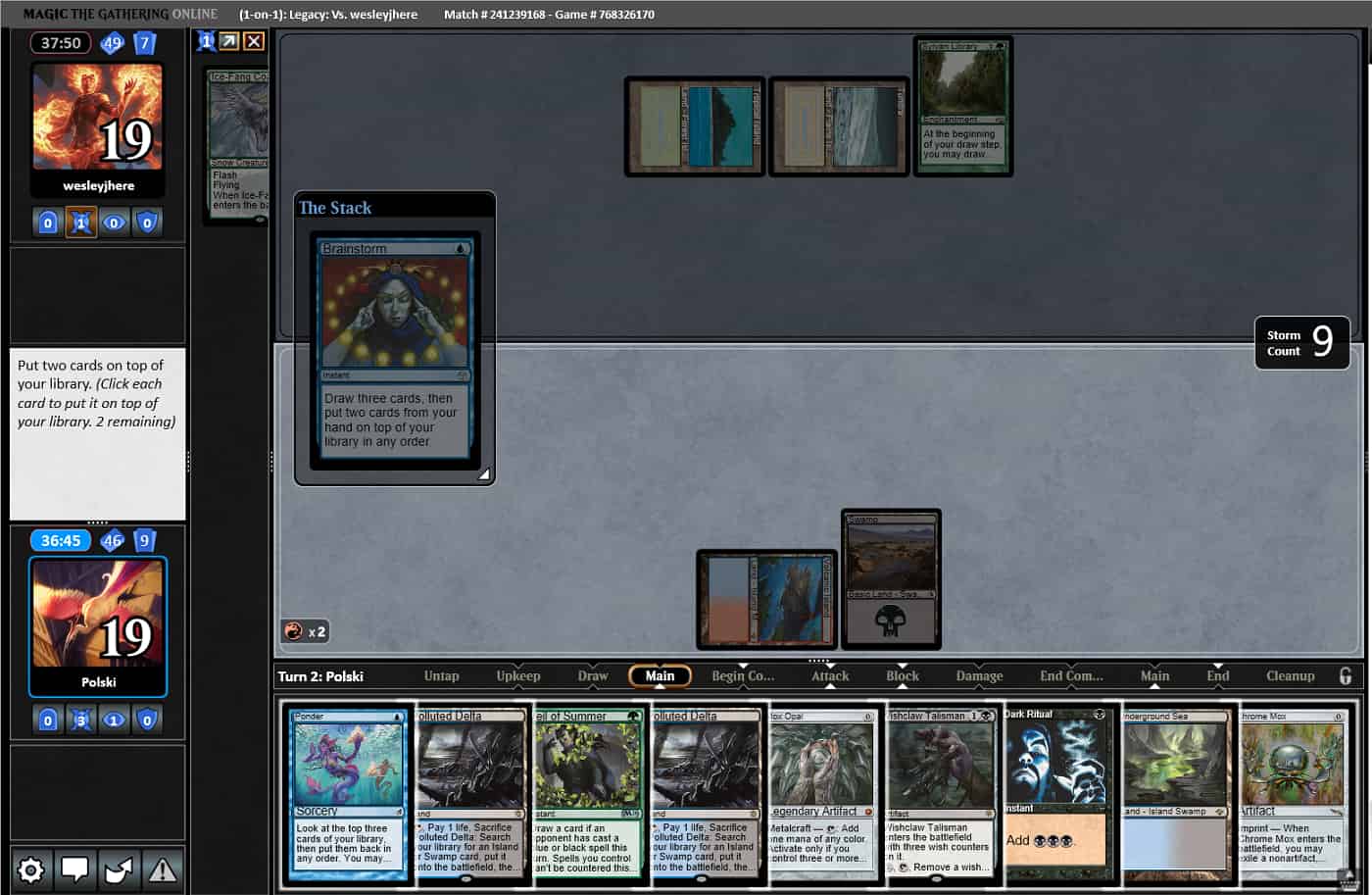 That’s the line I decided to go with, but my opponent had a [[Force of Will]]. I waited a few seconds trying to remember if the original [[Veil of Summer]] resolved or not. I couldn’t remember, but then my [[Wishclaw Talisman]] was countered. I don’t think I could have won by waiting more turns now that my opponent also had seven new cards. The game played out a few more turns, but I didn’t draw anything and eventually conceded. 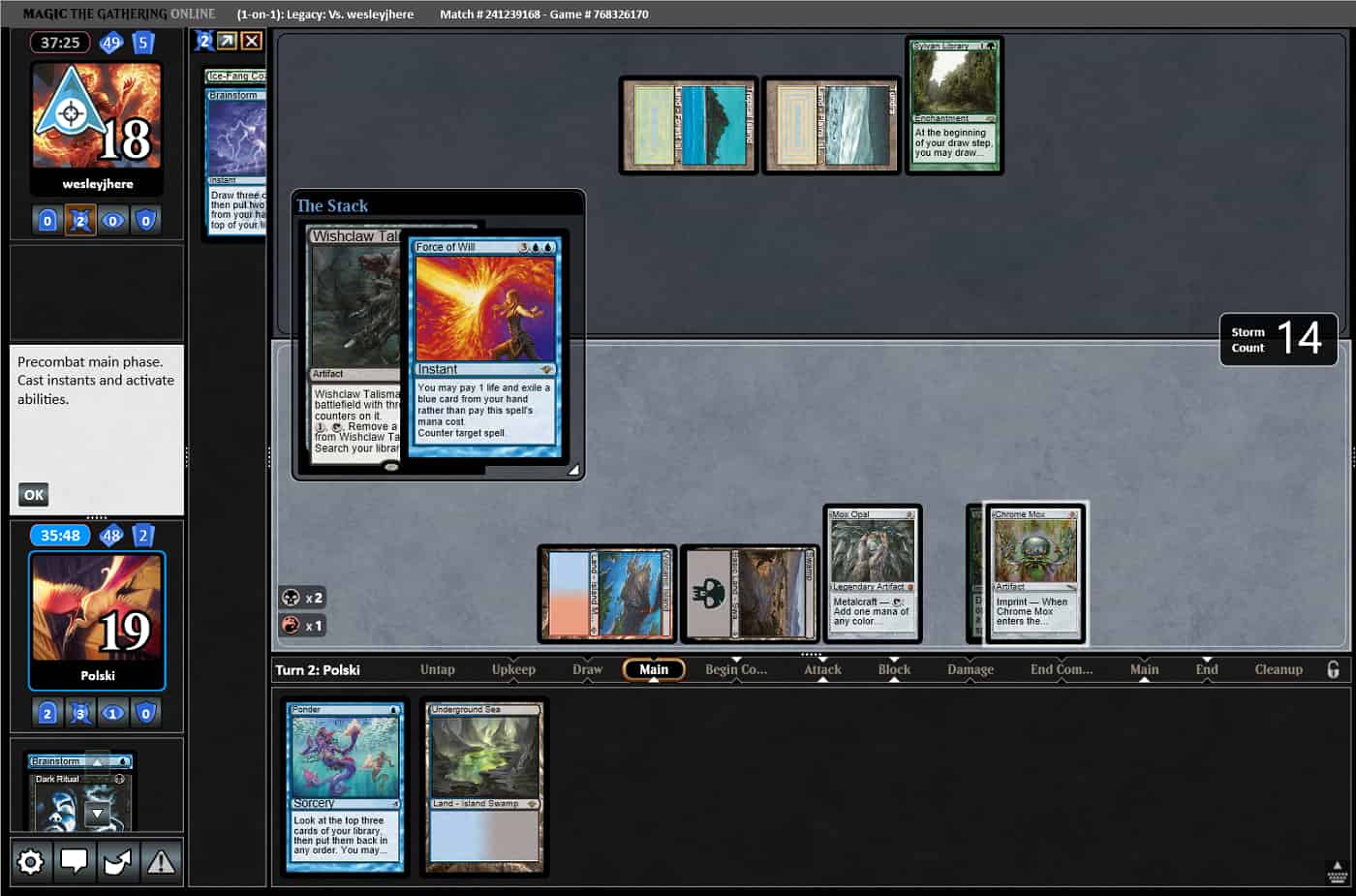 I sideboarded as I recommended, and we began the second game. My opponent kept their seven cards, but I had to mulligan down to six cards. In the first three turns of the game, my opponent didn’t play anything except for lands. On my third turn, I drew a [[Lotus Petal]]. My hand had lots of removal, protection, some mana, and a [[Galvanic Relay]]. I decided this would be a good turn to try to use [[Galvanic Relay]] to get some card advantage and to try to get something going for my next turn. I cast [[Rite of Flame]], [[Lotus Petal]], and then [[Galvanic Relay]] for three and revealed land, [[Wishclaw Talisman]], and another [[Galvanic Relay]]. My plan was to use the land and cast the [[Wishclaw Talisman]] on the next turn. 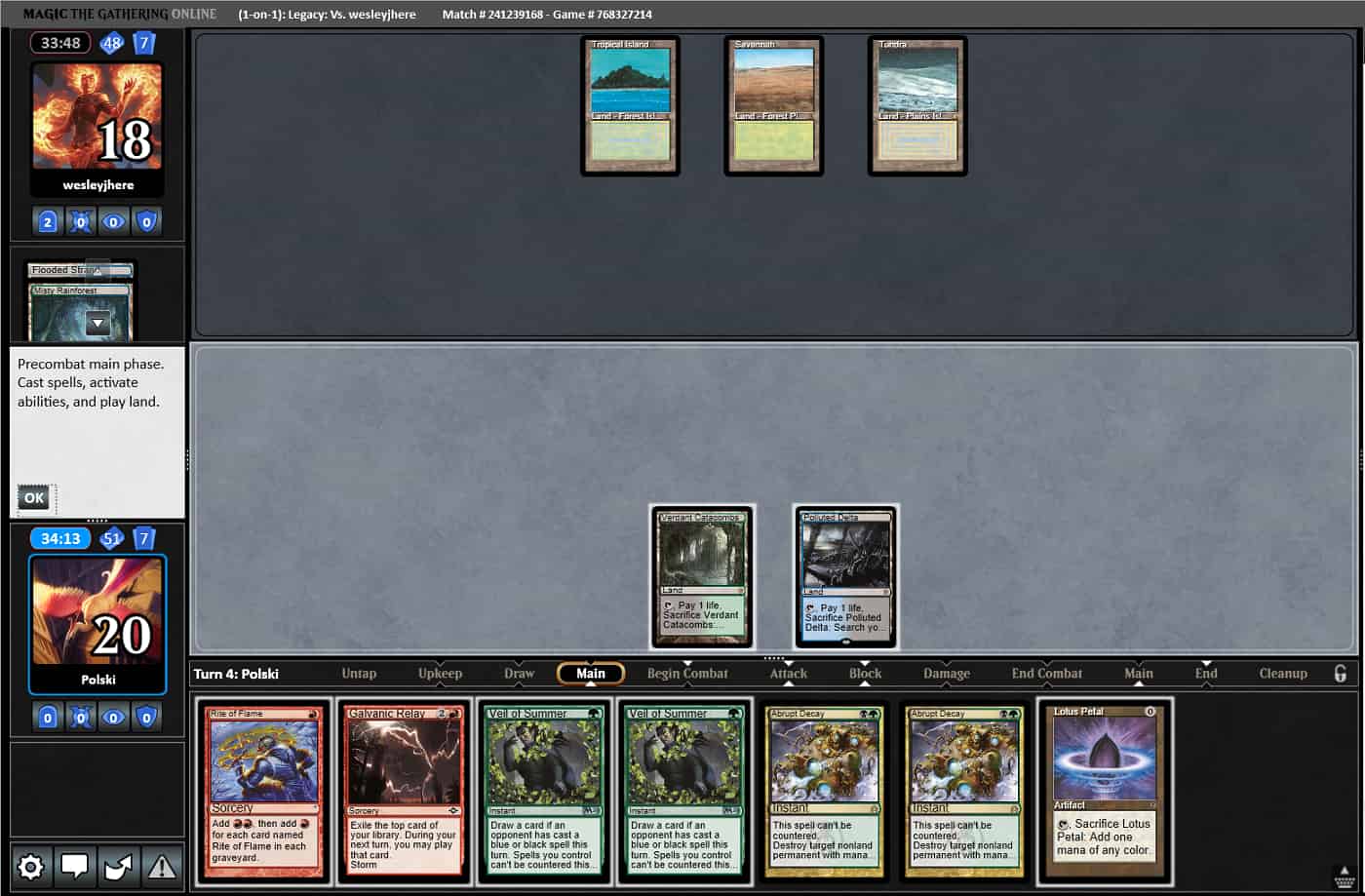 My opponent used their turn to cast a [[Uro, Titan of Nature’s Wrath]] and put an extra land into play. On my turn, I drew a [[Defense Grid]] and decided I would use my four mana to play it first and then the [[Wishclaw Talisman]]. I cast the [[Defense Grid]], and my opponent immediately cast [[Force of Negation]]. Since I had two copies of [[Veil of Summer]], I decided to use one here. Resolving [[Defense Grid]] would be huge, but also just getting to draw a card to get something going would be useful. My opponent then used a [[Force of Will]]. I once again cast [[Veil of Summer]]. I wanted [[Defense Grid]] to resolve, but I was also pretty far away from a combo, so I wanted to draw into another card. 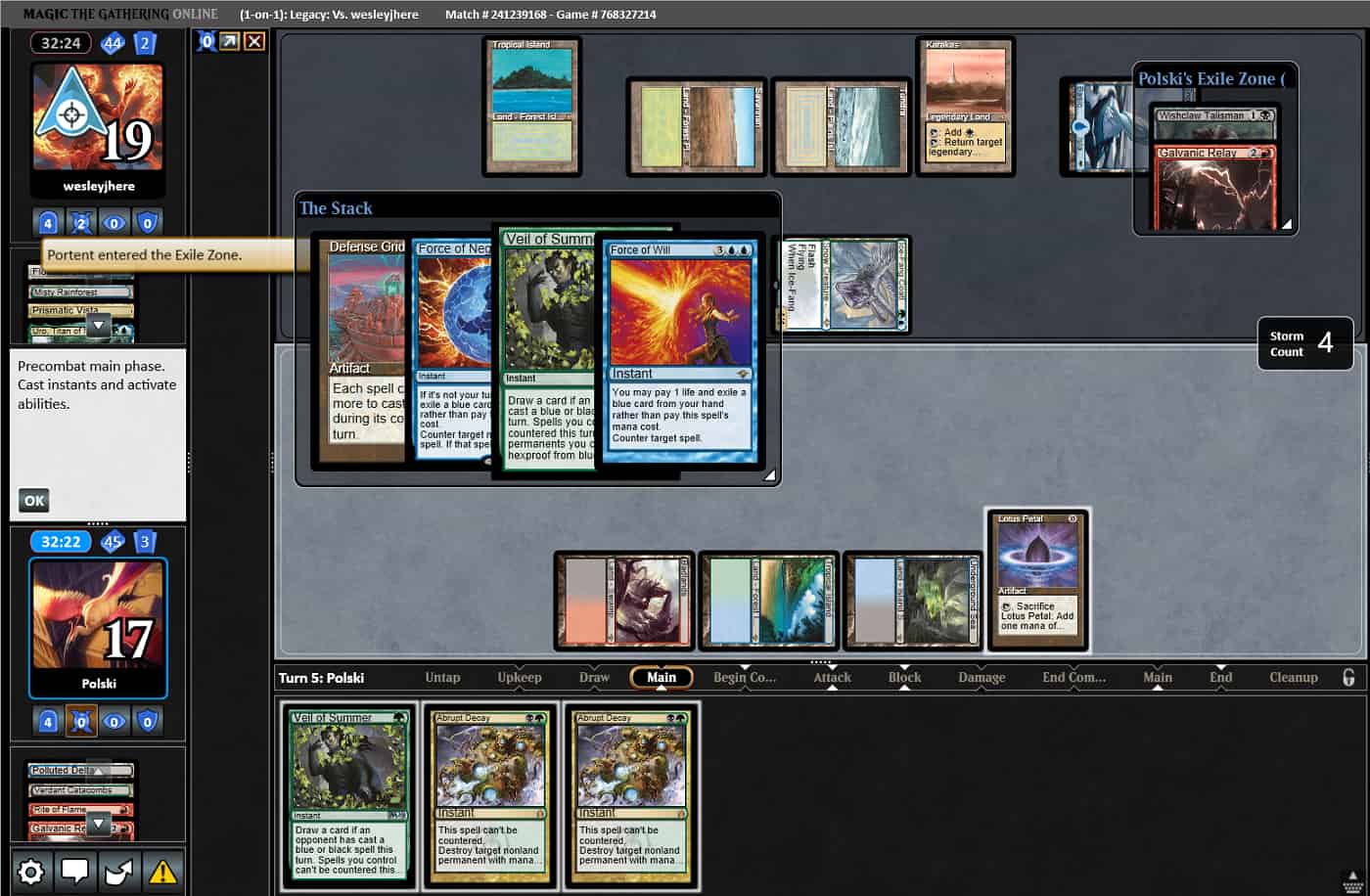 [[Defense Grid]] resolved, but unfortunately, I drew two copies of [[Chrome Mox]]. I just had to pass the turn. The opponent now had enough cards in their sideboard to cast [[Uro, Titan of Nature’s Wrath]] from their graveyard, and that’s what they decided to do. On my turn, I drew [[Rite of Flame]] and used one of my copies of [[Abrupt Decay]] to destroy the [[Uro, Titan of Nature’s Wrath]], but it was returned to their hand with [[Karakas]]. 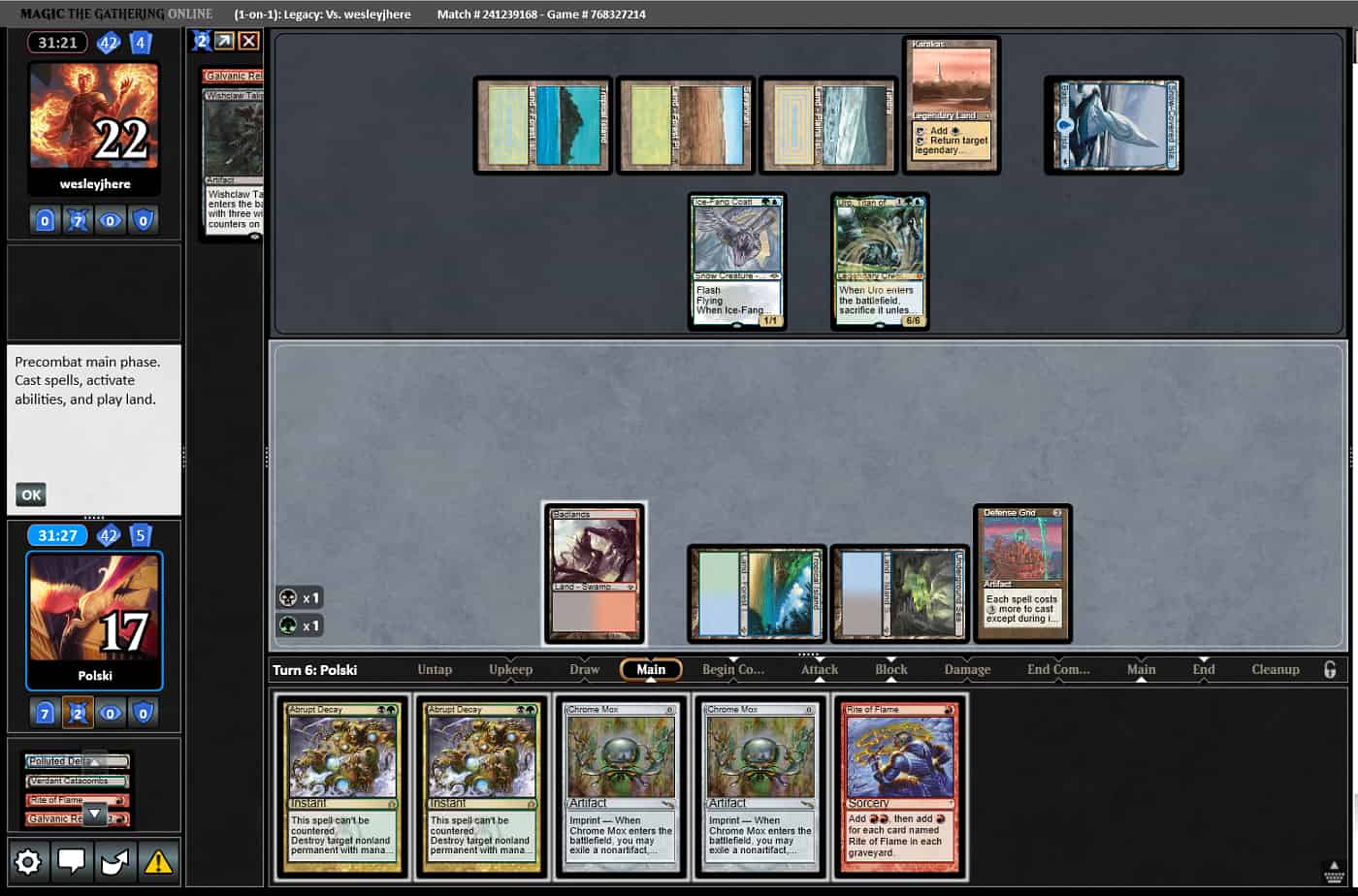 My opponent used their next turn to cast [[Prismatic Ending]] to destroy my [[Defense Grid]]. I then drew a [[Burning Wish]] for my turn. I cast it, and once it resolved, I got another [[Galvanic Relay]] and ended my turn. 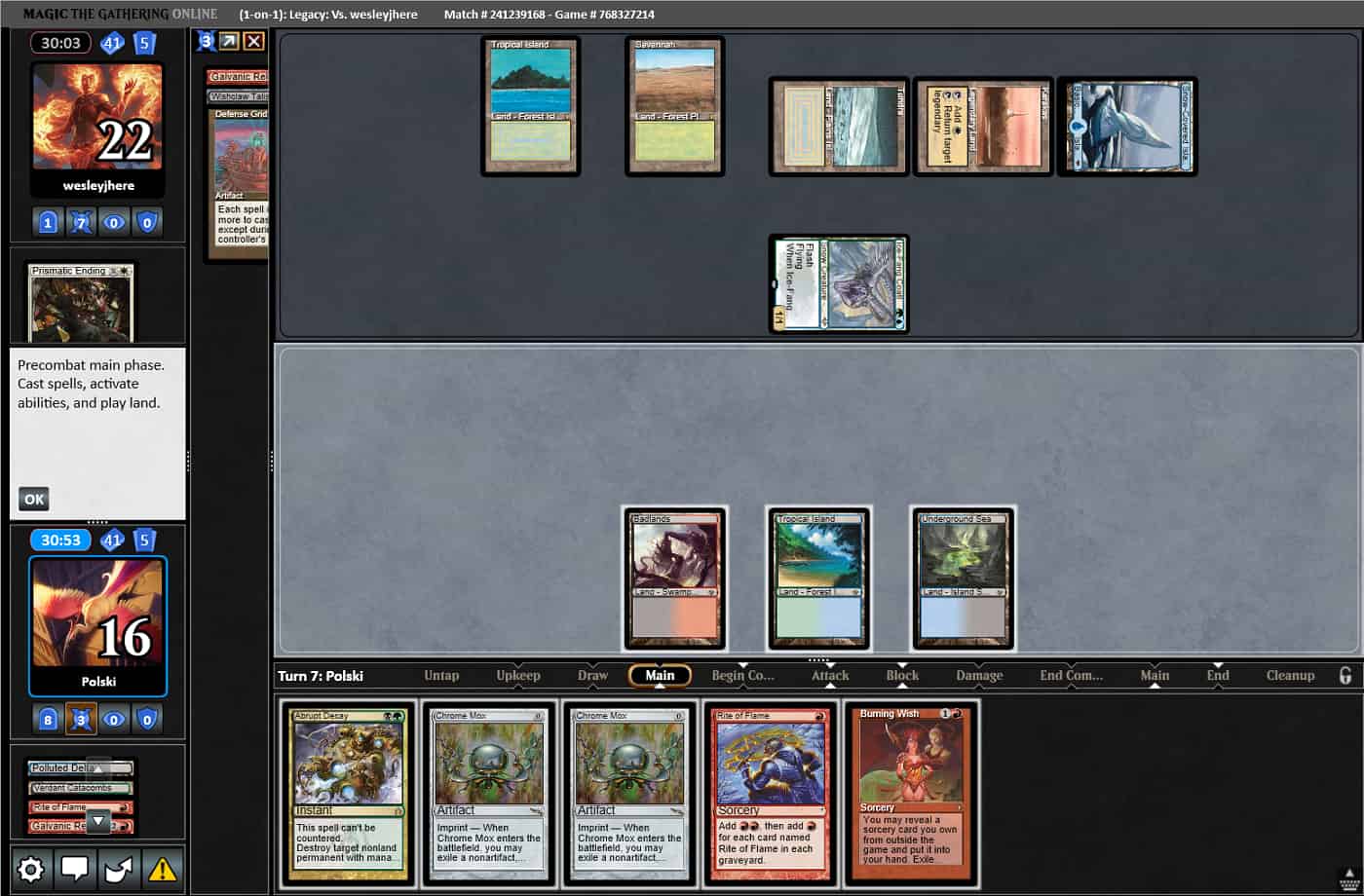 My opponent used their turn to cast a [[Uro, Titan of Nature’s Wrath]], and then return it to their hand with [[Karakas]], to draw a card. On my turn, I drew a [[Wishclaw Talisman]]. This gave me enough resources to try to go for a [[Galvanic Relay]] with quite a bit of Storm. 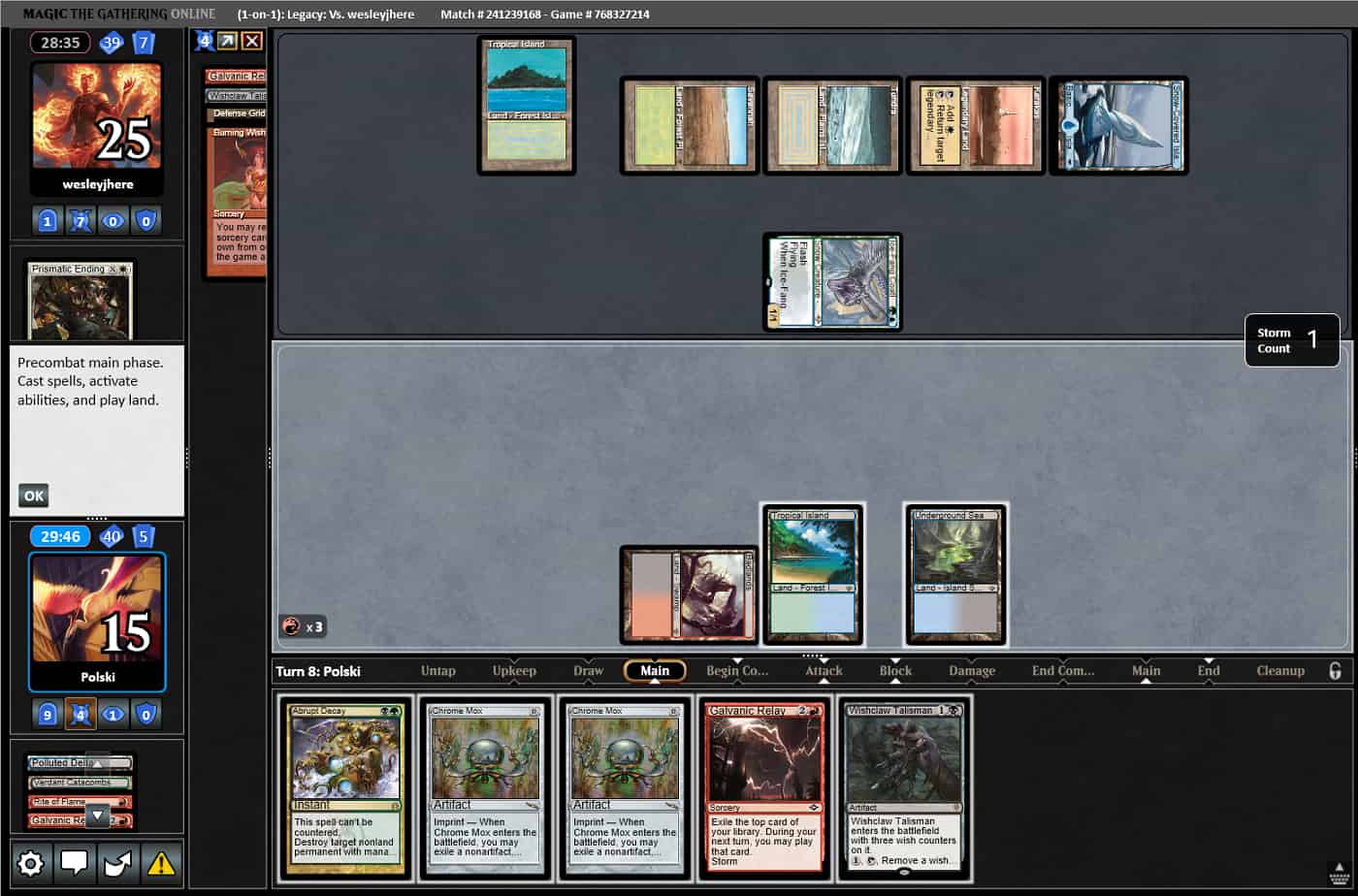 I cast the [[Rite of Flame]] for three red since another copy is in my graveyard, and both copies of [[Chrome Mox]] only imprinting one with the [[Abrupt Decay]]. I then cast [[Wishclaw Talisman]], which was immediately countered. That allowed to cast [[Galvanic Relay]] for six Storm. I hoped this would give me enough card advantage to try to win on the following turn. 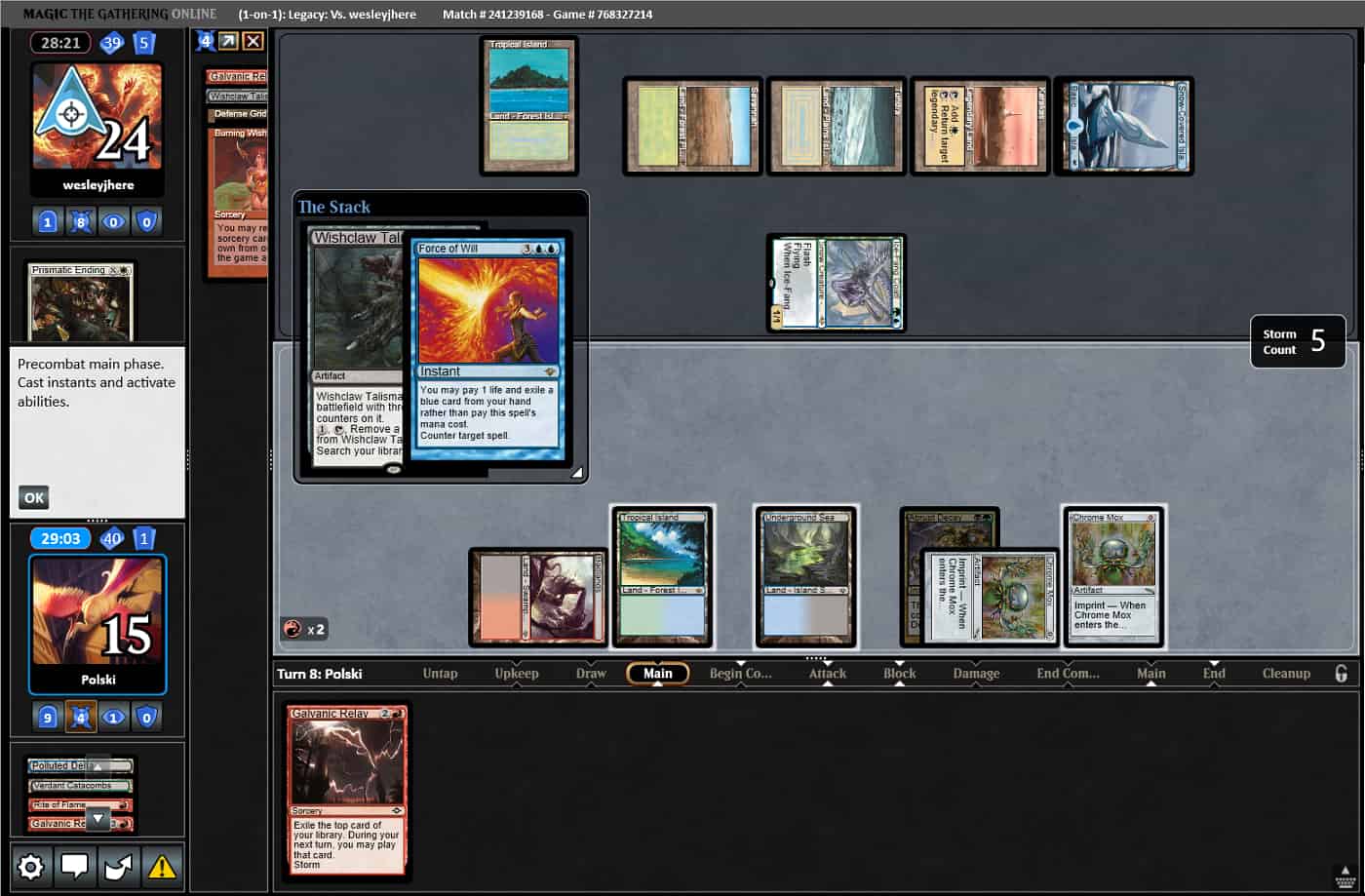 My opponent used their turn to do the same thing that they did on the previous turn, which was cast [[Uro, Titan of Nature’s Wrath]] and then use [[Karakas]] to return it to their hand. They also cast a [[Ponder]] and then ended their turn. On my turn, I drew another land, and I only had the cards from [[Galvanic Relay]] to work with. Unfortunately, that was just mana and a [[Burning Wish]]. My opponent had drawn so many extra cards off [[Uro, Titan of Nature’s Wrath]] and [[Ponder]] the past several turns that the odds they had counterspells was pretty high. I already used the [[Galvanic Relay]] from my sideboard, so I didn’t have many counter-resistant cards left. Because of [[Uro, Titan of Nature’s Wrath]], the opponent had also gained quite a bit of life and was at 27, so [[Tendrils of Agony]] was no good. The only other option that couldn’t be countered was [[Empty the Warrens]]. I decided to just go for that line, played out all of the mana, and then [[Burning Wish]] for [[Empty the Warrens]] to make 10 goblins. I didn’t really have another line if I wanted to play around a counterspell. 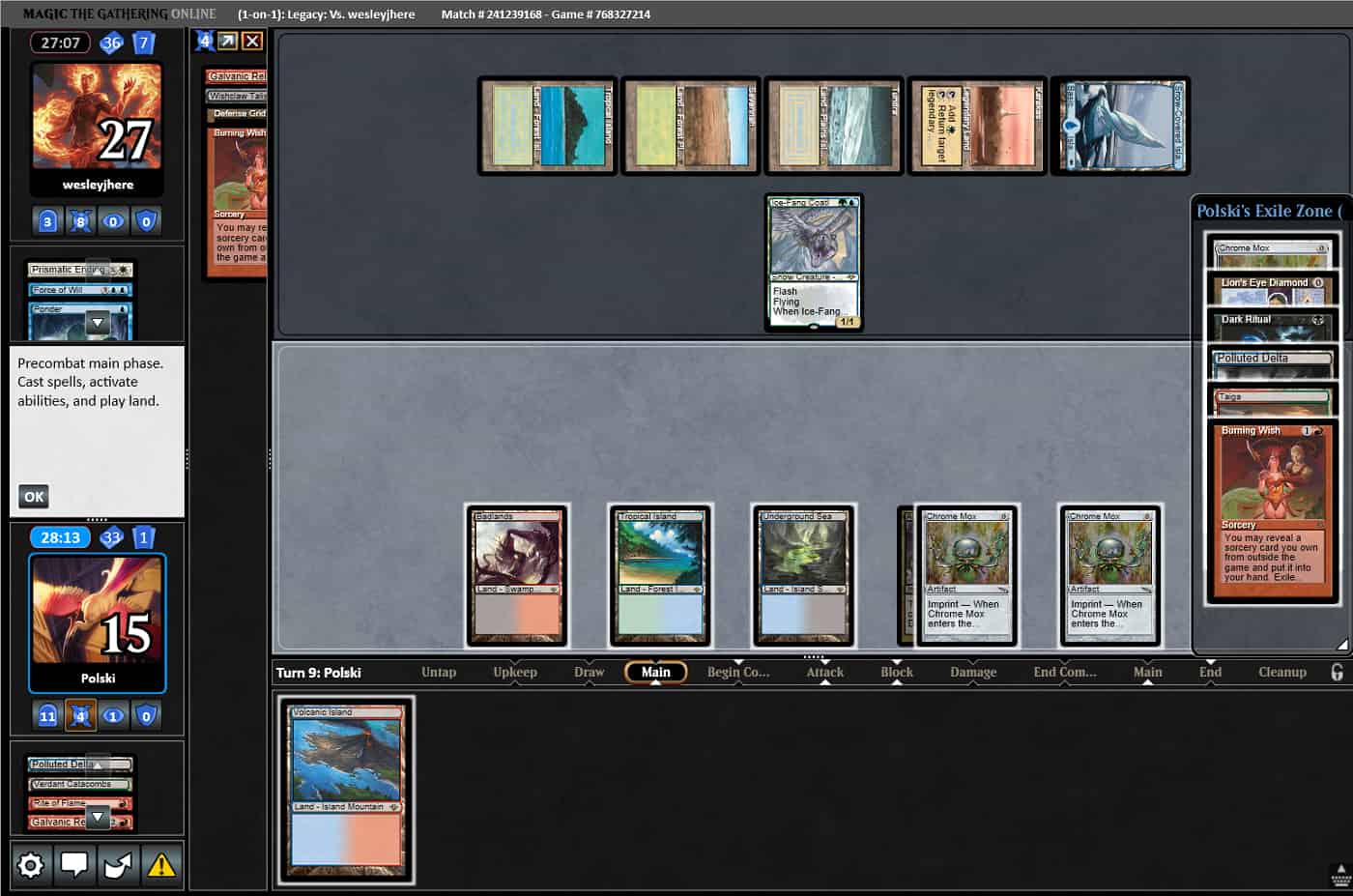 The opponent let all of that resolve, but unfortunately, they had an [[Engineered Explosives]]. I just conceded because the opponent had enough life and card advantage to win the game. 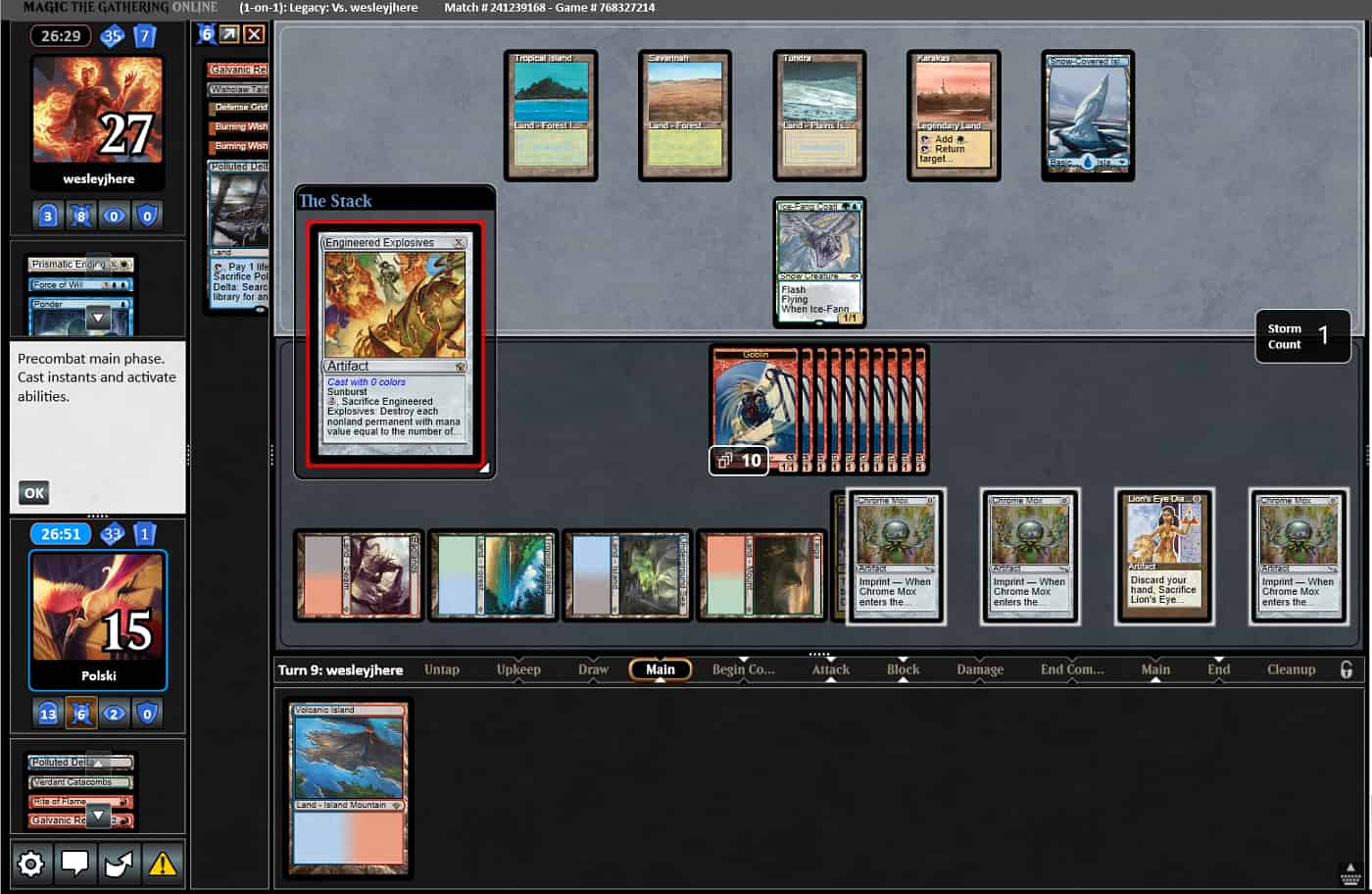 
These games were pretty long and had a ton of decisions. I definitely didn’t play my best and made some mistakes, but that’s why we playtest. Bant Control is a new flavor of a deck that’s playing several new cards. TES has several new cards as well, so it means playtesting will have lots of mistakes as we all try to learn how to best use these new cards. [[Galvanic Relay]] also adds a new dimension to TES and this matchup that previously didn’t exist before. The matchup against Bant Control is my new favorite match to play. It has so many back-and-forth swings, decisions by both players, and a lot of counterplay to it. The games also go really long as you saw in my example games, and it can often be hard to tell who’s winning. It’s exciting that there can be so many new cards printed recently to shake up Legacy. It really opens up the format to new decks and giving existing decks new tools to try out. No matter how well we think we know Legacy or the metagame it can always change with new cards, so we need to be constantly analyzing the matchups. I hope you enjoyed this article, can take some of the lessons learned, and apply them to your own playtesting.