Death & Taxes looks like a white weenie deck to the casual observer. In reality, Death & Taxes is a creature-based control deck that focuses on disrupting the opposing deck. Their goal is to play creature spells that delay the opponent just long enough to try and win the game by attacking before the opponent can get around the disruption. Both Death & Taxes and The Epic Storm have gotten new additions to their decks, so it’s important to reanalyze the matchup.

How does Death & Taxes matchup against TES?

[[Thalia, Guardian of Thraben]], [[Spirit of the Labyrinth]], [[Stoneforge Mystic]] – These are the cards that make turn two the critical turn in this matchup. The opponent doesn’t have much that they can do on the first turn, but several key threats for the second turn. All three of these cards disrupt us in different ways. [[Thalia, Guardian of Thraben]] makes it difficult to combo at all since we are trying to chain many spells. [[Spirit of the Labyrinth]] is effective if we are reliant on cantrips in order to assemble our combo. It can be just disruptive enough to give the opponent a few more turns to play other interactive cards like [[Wasteland]] or [[Thalia, Guardian of Thraben]]. [[Stoneforge Mystic]] makes trying to win with [[Empty the Warrens]] unlikely.

[[Skyclave Apparition]], [[Sanctum Prelate]] – In addition to the two-mana creatures, Death & Taxes plays several good three mana cards. [[Skyclave Apparition]], a newer addition to the deck, is pretty good against TES at being able to exile any of the artifacts that we have in play. [[Sanctum Prelate]] is able to cut off certain parts of our deck. The two most common numbers are four for [[Tendrils of Agony]] and [[Empty the Warrens]] or two for [[Burning Wish]] and [[Wishclaw Talisman]].

[[Wasteland]], [[Rishadan Port]] – Winning through these cards is more about your skill in Legacy, and not so much about the matchup in particular. Some hints to beating these cards are fetching the basic lands if you can afford to. Not all hands allow you to do this, so making this evaluation of when you can afford to will be key in beating [[Wasteland]] in all matchups that have it. [[Rishadan Port]] is less good and easier to beat because if the opponent is activating [[Rishadan Port]], they aren’t playing any hate creatures and that is good for us. We can also afford to leave fetch lands in play until the time we are going off to nullify [[Rishadan Port]]. It can still be an effective form of disruption if we keep a land light hand or when combining it with [[Wasteland]].

The second turn is the key turn for this matchup. Death & Taxes only has [[Wasteland]] for a turn one disruptive play, but numerous creatures that they can play on the second turn. This is important when evaluating the opening hand. The question we need to be asking ourselves is “what does this hand do against a turn two hatebear?” If the opponent knows we are a Storm deck, they will make sure to keep a hand with one. Our hand could line up well against this by either having a removal spell, a fast combo, or the ability to win through some of their creatures.

Sideboarding is pretty straightforward. [[Veil of Summer]] doesn’t do anything for us in this matchup, so it’s an easy cut. Death & Taxes only interaction is permanent-based. Therefore, we need our interaction to lineup appropriately. [[Abrupt Decay]] and [[Chain of Vapor]] are good answers at removing whichever annoying creature the opponent has in play.

In this example, I have already won the first game and I was on the draw for the second game. I kept a good hand. It had a basic [[Swamp]], rituals, and a [[Wishclaw Talisman]]. The opponent is on the play, but my hand lined up well against [[Wasteland]] and most turn-two plays, except for [[Thalia, Guardian of Thraben]] as I couldn’t win on the first turn. 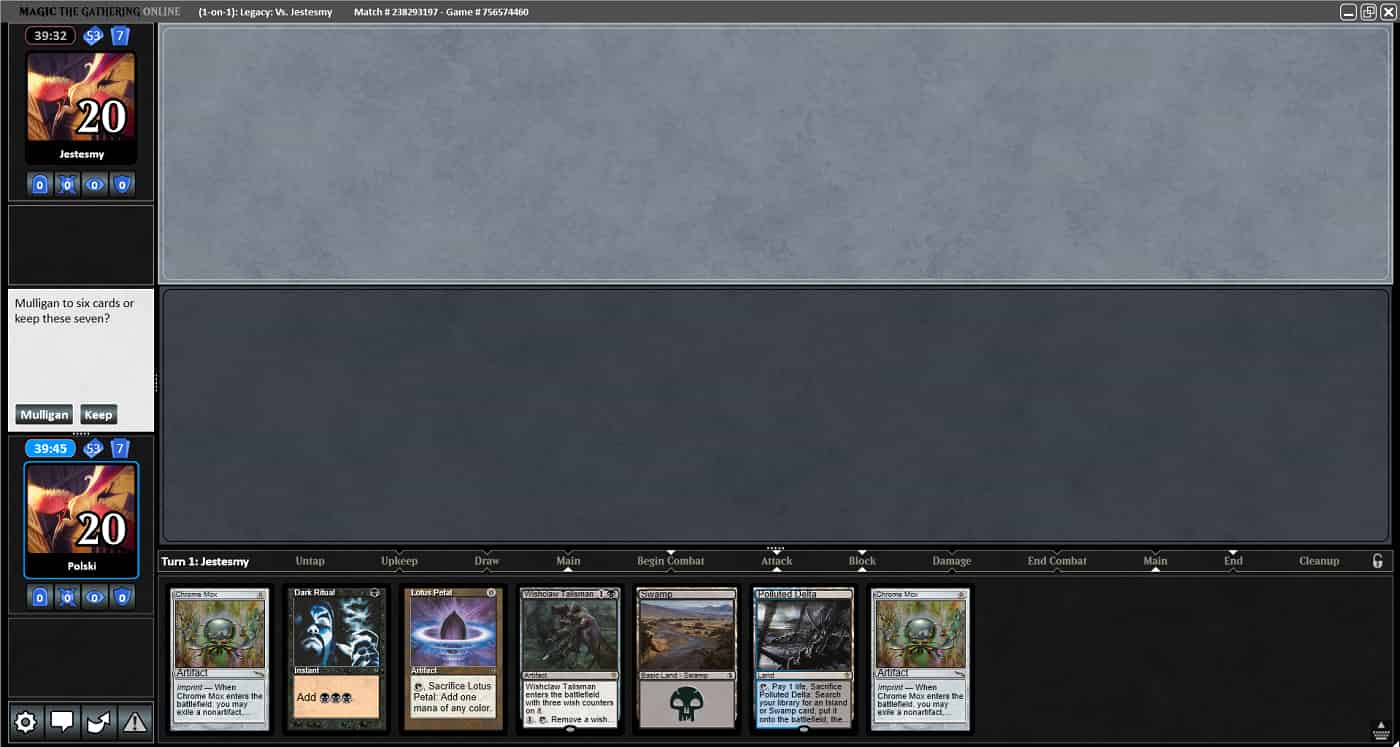 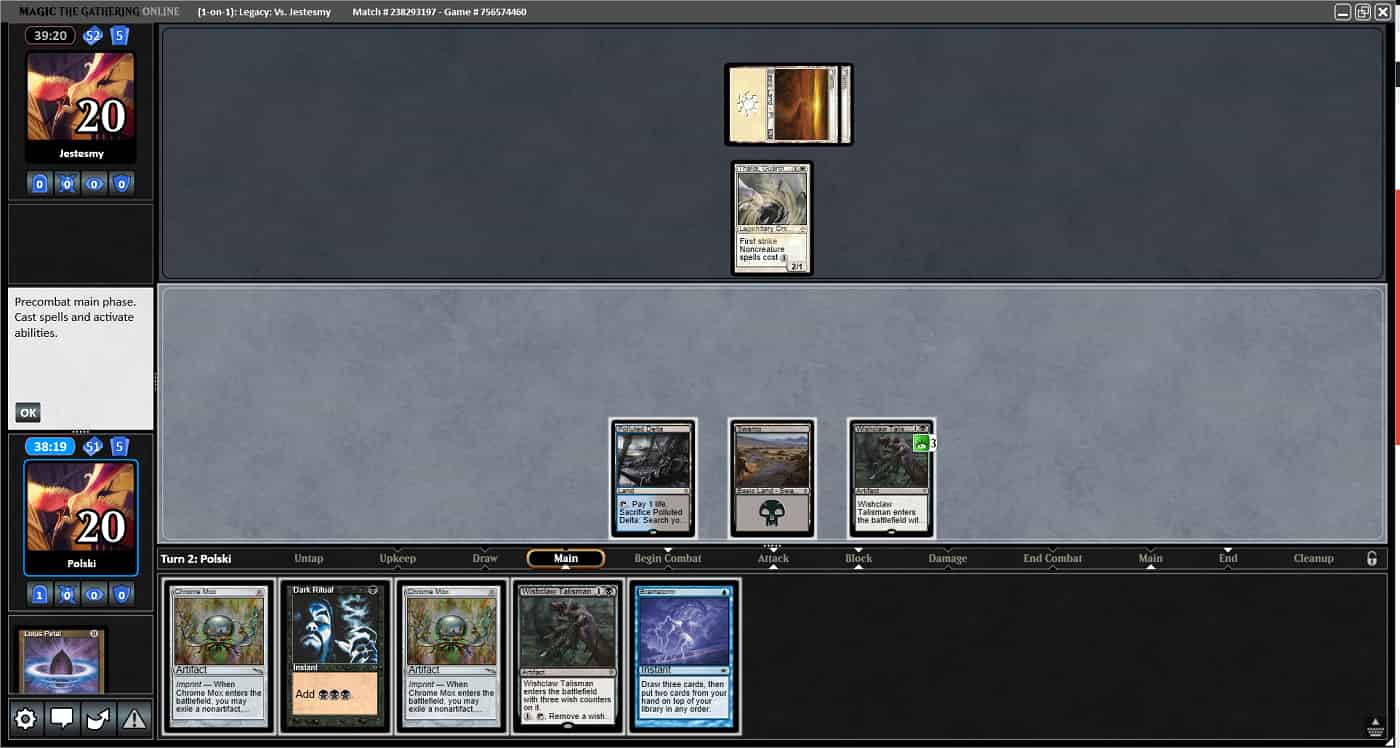 On my opponent’s third turn, they cast [[Stoneforge Mystic]] and searched for [[Batterskull]]. This pretty much removes trying to win with [[Empty the Warrens]]. On their end step, I cast [[Brainstorm]] and drew [[Mox Opal]], [[Bloodstained Mire]], and [[Ponder]]. I decided to put a [[Chrome Mox]] as the bottom card to shuffle away with the [[Bloodstained Mire]]. On my turn, I cast the [[Ponder]] to look for an answer for the [[Thalia, Guardian of Thraben]]. I didn’t find one, so I had to shuffle and then drew a land. 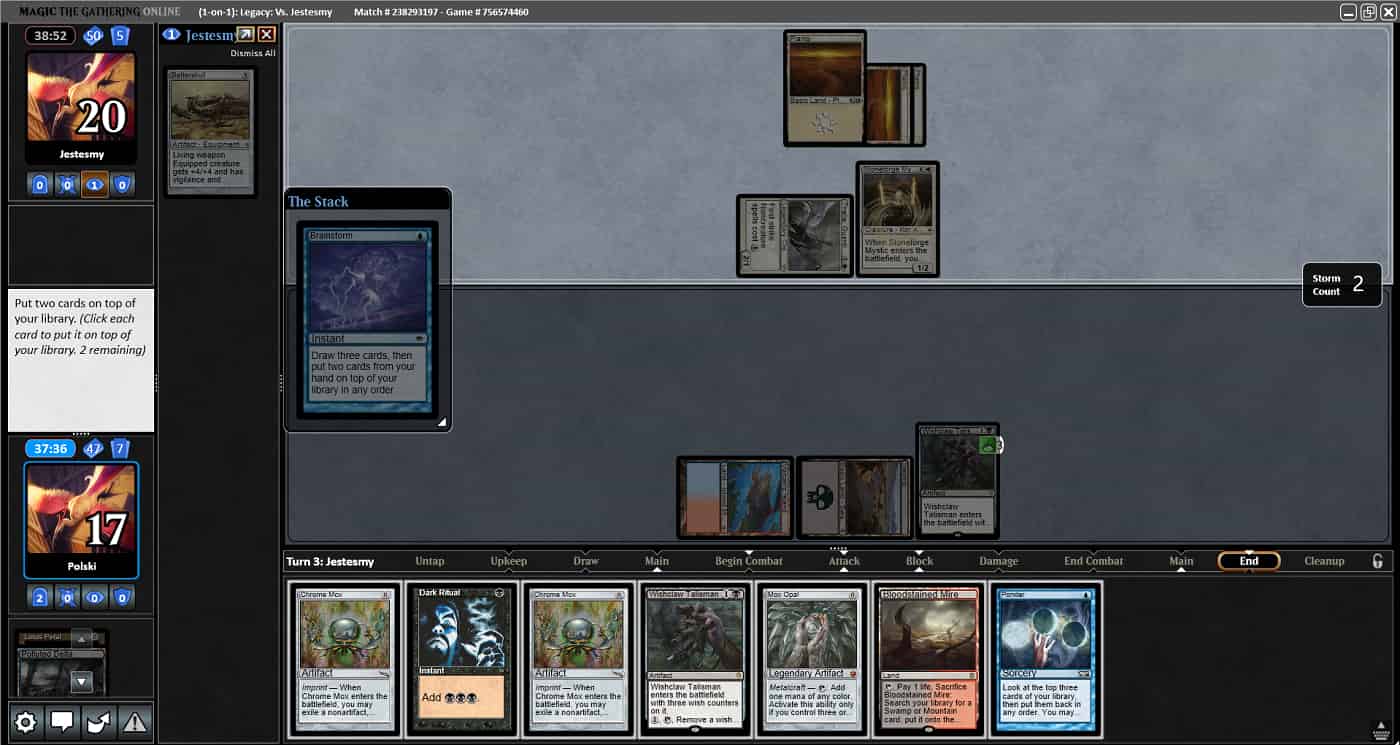 On my opponent’s third turn, they just attacked with the [[Thalia, Guardian of Thraben]] and left [[Stoneforge Mystic]] untapped in order to put [[Batterskull]] into play. On my fourth turn, I drew another [[Dark Ritual]]. My game plan was to play out the second copy of [[Wishclaw Talisman]] in order to use one to search for a [[Chain of Vapor]] and the second to search for a win condition like [[Ad Nauseam]] or [[Echo of Eons]]. 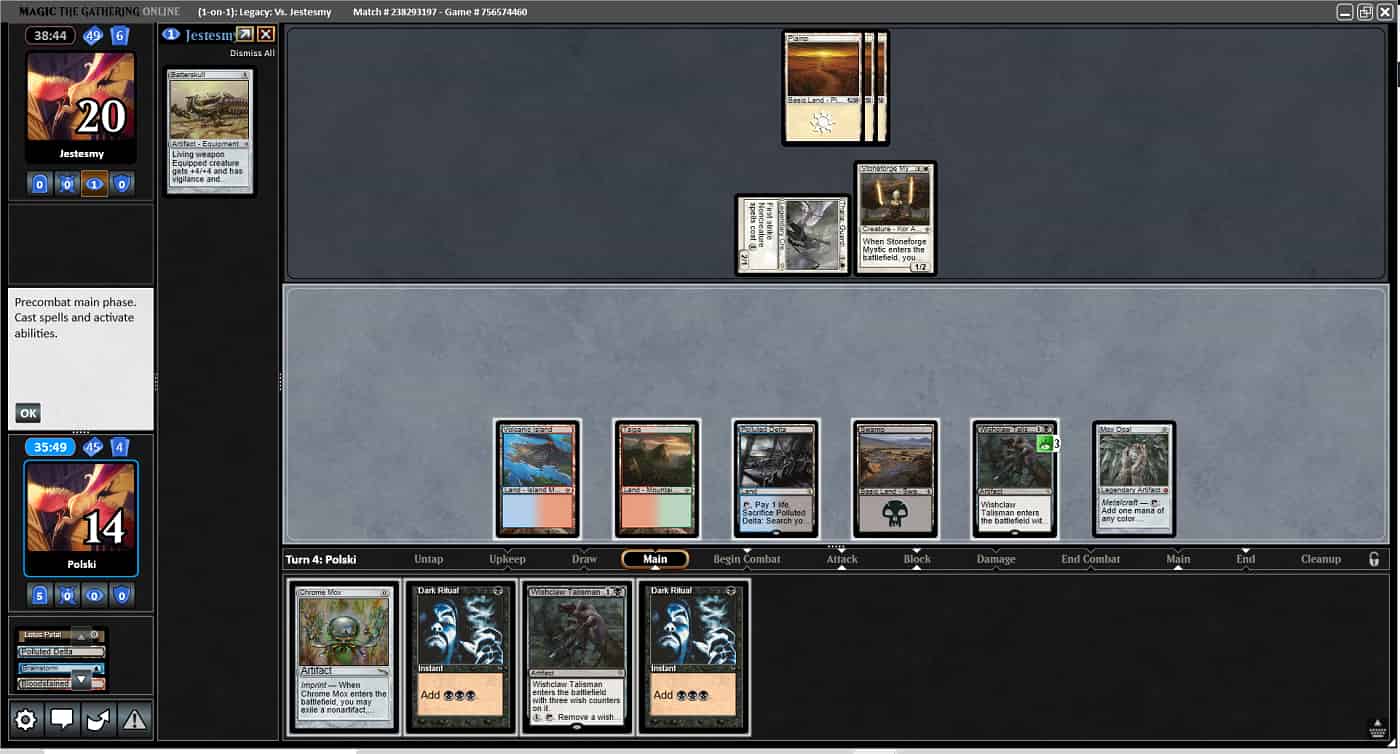 On my end step, the opponent put the [[Batterskull]] into play. On their turn, they attacked with all three of their creatures to put me down to seven life. Then they cast [[Spirit of the Labyrinth]], shutting off [[Echo of Eons]] or any cantrip drawn for the turn. On my turn I drew the third copy of [[Dark Ritual]]. I needed to find a way to win this turn. 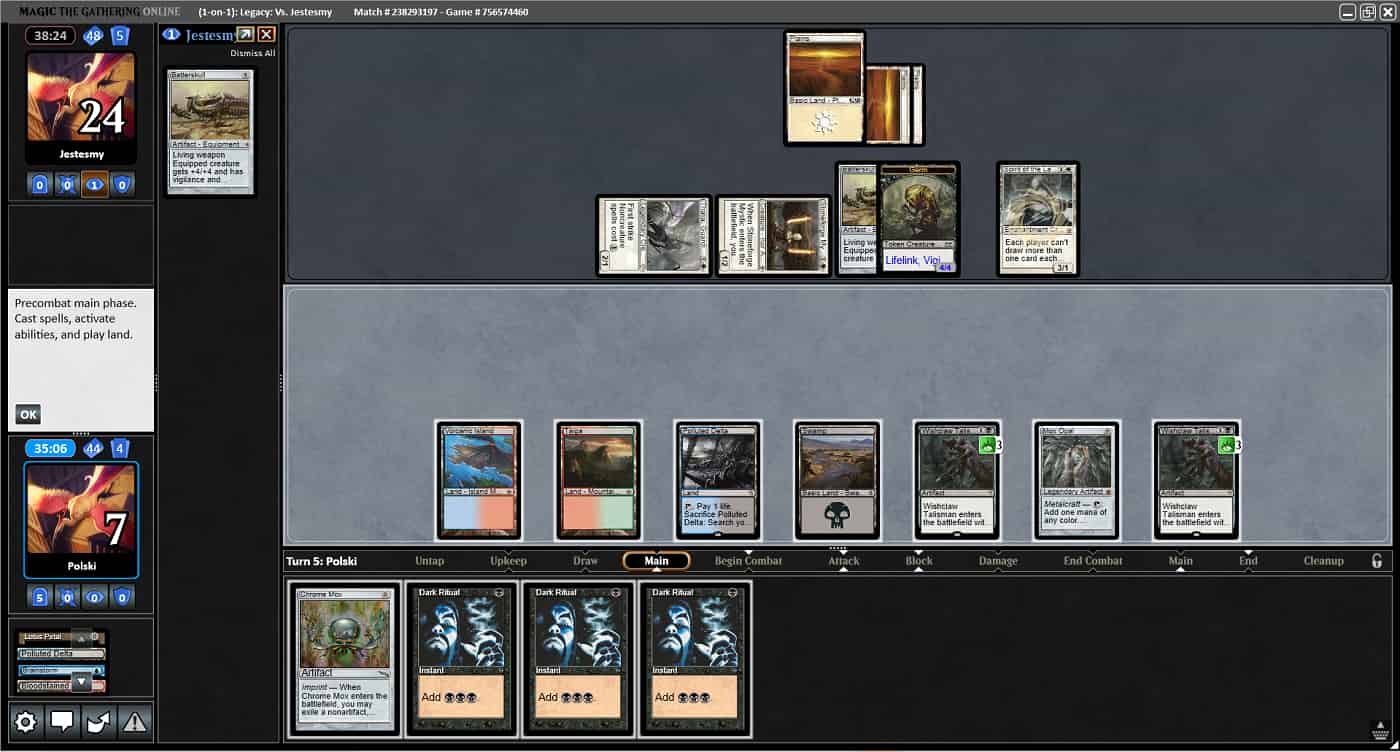 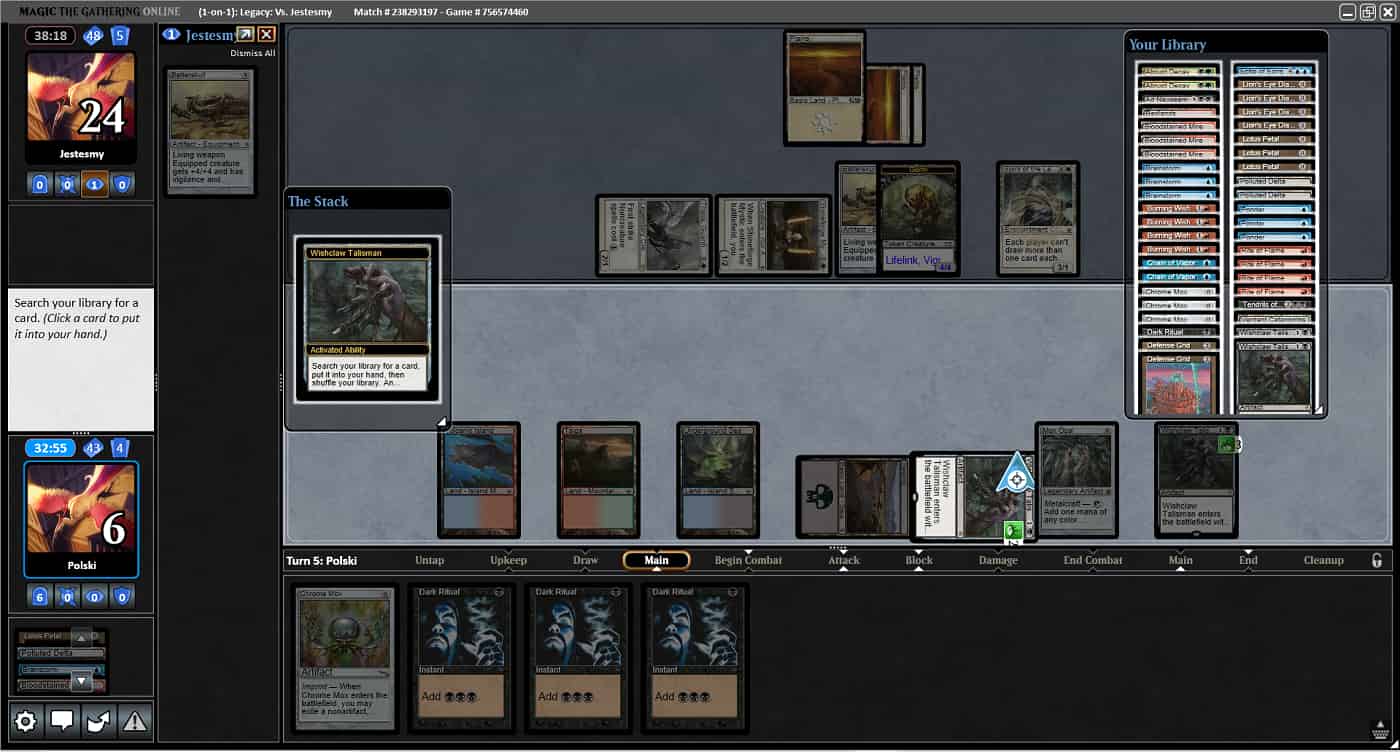 When deciding what to search for, if I chose [[Chain of Vapor]], then the opponent will have the ability to copy it. I couldn’t win with [[Echo of Eons]] because of the [[Spirit of the Labyrinth]] and didn’t have enough storm for [[Tendrils of Agony]] or enough life for [[Ad Nauseam]]. Unfortunately, I didn’t see a different line in order to win and losing. Maybe I missed something or didn’t see a line along the way that could have led me to win this game. Let me know if you would have played out this game differently.

The other two games of this match didn’t have much to it. Usually, if TES wins a game against Death & Taxes, then it’s over quickly without much to explain. That’s why I wanted to demonstrate a game that went on several turns and had more play and decision-making from our perspective. TES is one of the faster decks in the format with a high probability of being able to combo on the first or second turns of the game. This means if Death and & Taxes is on the draw, they need a little luck in order to make it to their second turn. Overall, I think the matchup is heavily in our favor, but it’s still important to practice and analyze the matchup. I hope you enjoyed this article and I wish you the best of luck in your own testing.