Doomsday is a rather simple deck in concept. Cast a [[Doomsday]] to make your library five cards and then win with a [[Thassa’s Oracle]]. The actual execution can vary by scenario. For example, how much mana do you have? How many cards can you draw? Can you afford to pass the turn? Questions like these determine which cards are in that final five card library, but all paths lead to [[Thassa’s Oracle]] winning the game. It’s been one of the most successful combo decks recently because of its speed, resiliency to disruption, and the ability to play both discard and counterspells. It’s a deck that every Legacy player will want to have a game plan for.

How does Doomsday matchup against TES?

[[Doomsday]], [[Thassa’s Oracle]] – One of the best things about the Doomsday deck is that it is a one card combo deck. All you need to do is cast [[Doomsday]] and put a [[Thassa’s Oracle]] in the five-card library to win the game. There are not many combo decks that only require casting one card. Doomsday can have a wide range of different piles for different scenarios and can include counterspells or discard.

This matchup is a balancing act between trying to combo before the opponent, but also not just blindly comboing into counterspells. Walking this tight rope is difficult because Doomsday can win quickly, has discard spells, and counterspells. If we try to combo too quickly, we can lose to a [[Daze]] that we easily could beat waiting a turn or finding a [[Silence]] for other counterspells, but waiting a turn and the opponent can play a discard spell or win themselves. Trying to beat this type of deck requires keeping a hand that has the potential to win on the first or second turn of the game along with some protection or disruption. This is a big ask because it’s the perfect hand, but that is what it takes to win this matchup. We have to mulligan aggressively and keep some hands that might not do anything on its own, but the perfect draw allows us to win. Our deck is heavily built around [[Galvanic Relay]] which isn’t that good in this matchup. We don’t want to use a setup turn with [[Galvanic Relay]], because passing the turn will usually lead to us losing unless it’s on the first turn. This requires setting up lines to win with [[Ad Nauseam]] or [[Echo of Eons]].

Sideboarding in this matchup is pretty straightforward. [[Galvanic Relay]] is great against counterspells, which Doomsday plays many of, but it’s pretty bad against decks that can combo quickly. We aren’t looking to generate card advantage and win over several turns. This matchup is about winning before they do, so [[Galvanic Relay]] isn’t the path to take in this matchup. It’s easily substituted for [[Thoughtseize]]. [[Thoughtseize]] is a proactive form of disruption that can clear the way for our own combo, but also heavily disrupt Doomsday from assembling their own. It lines up better with how we want to approach the matchup.

For the first game, I was on the draw and my opponent mulliganed, but I kept my seven with mana, [[Galvanic Relay]] and an [[Ad Nauseam]]. My opponent started the game off with a [[Lotus Petal]] to cast [[Brainstorm]] and then played a land to shuffle. For my first turn, I just played a land and passed hoping to combo on my second turn. My opponent just played a land and passed on their next turn. For my second turn, I drew [[Wishclaw Talisman]]. Playing my second land gave me the mana to cast [[Galvanic Relay]] for four Storm. I didn’t have another way to combo this turn, so I just had to use a turn to setup and hope it would be good enough to win on my next turn and for my opponent not to win on their turn. 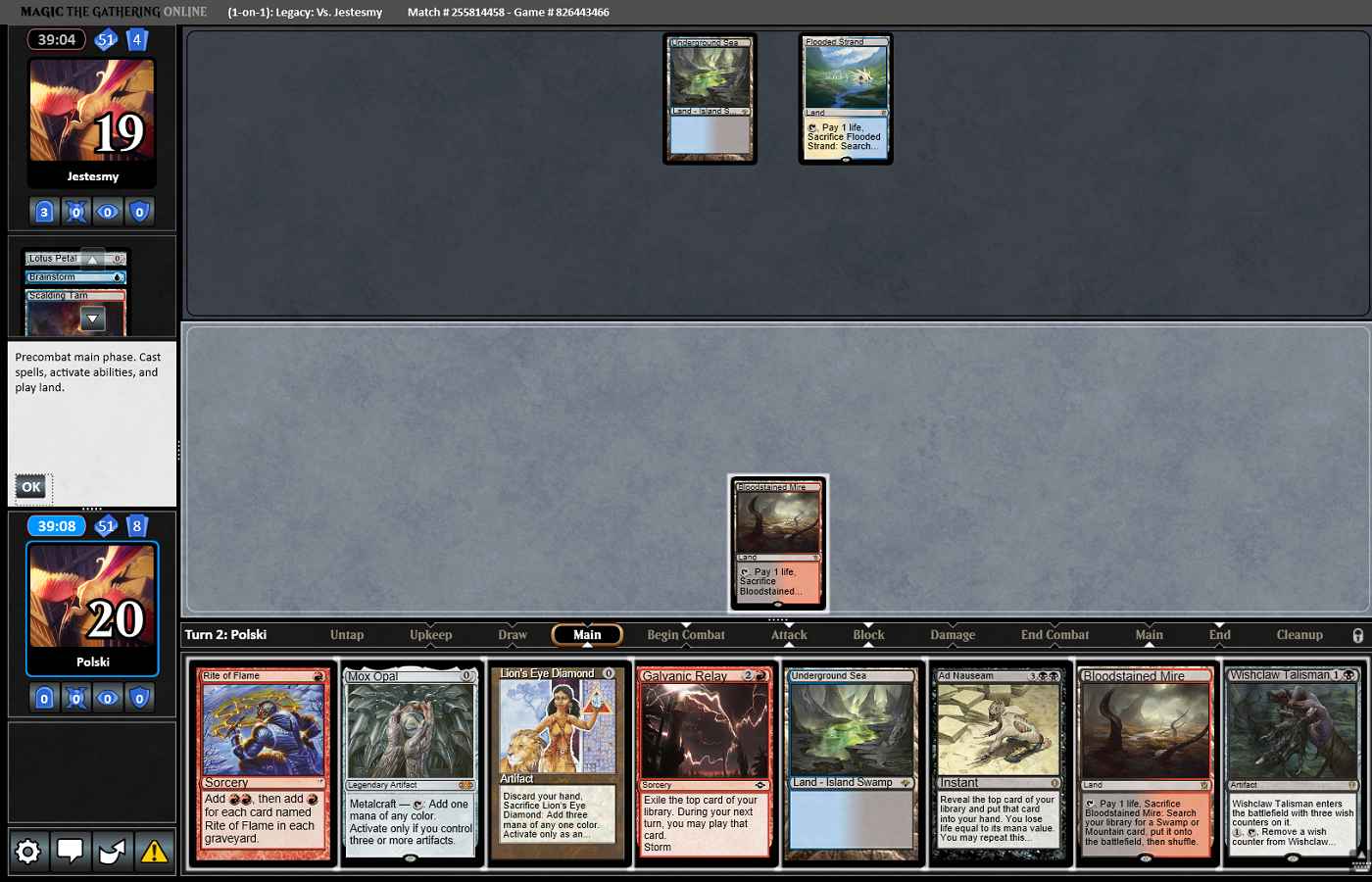 [[Galvanic Relay]] exiled [[Lion’s Eye Diamond]], [[Wishclaw Talisman]], [[Echo of Eons]], and [[Rite of Flame]]. This would give me lots of options for the following turn. On my end step, my opponent cast a [[Consider]] and then used their turn as a setup turn to cast [[Ponder]] and [[Personal Tutor]] for [[Doomsday]]. On my turn, I drew a third copy of [[Lion’s Eye Diamond]] and knew this was the turn to combo. Having access to so much mana and different tutors and ways to combo made this is a very interesting turn. There were many lines here and lots of scenarios to think through.

I didn’t have a [[Silence]], so I decided to take a line that would present being able to combo twice. I played my land from hand and both copies of [[Lion’s Eye Diamond]]. With a [[Rite of Flame]] in my graveyard, I cast the one from exile for three red mana. Using that three red mana and my other two lands, I cast [[Ad Nauseam]]. With it on the stack, I held priority and sacrificed two copies of [[Lion’s Eye Diamond]]. If it didn’t resolve, then I could [[Echo of Eons]], but luckily it did. 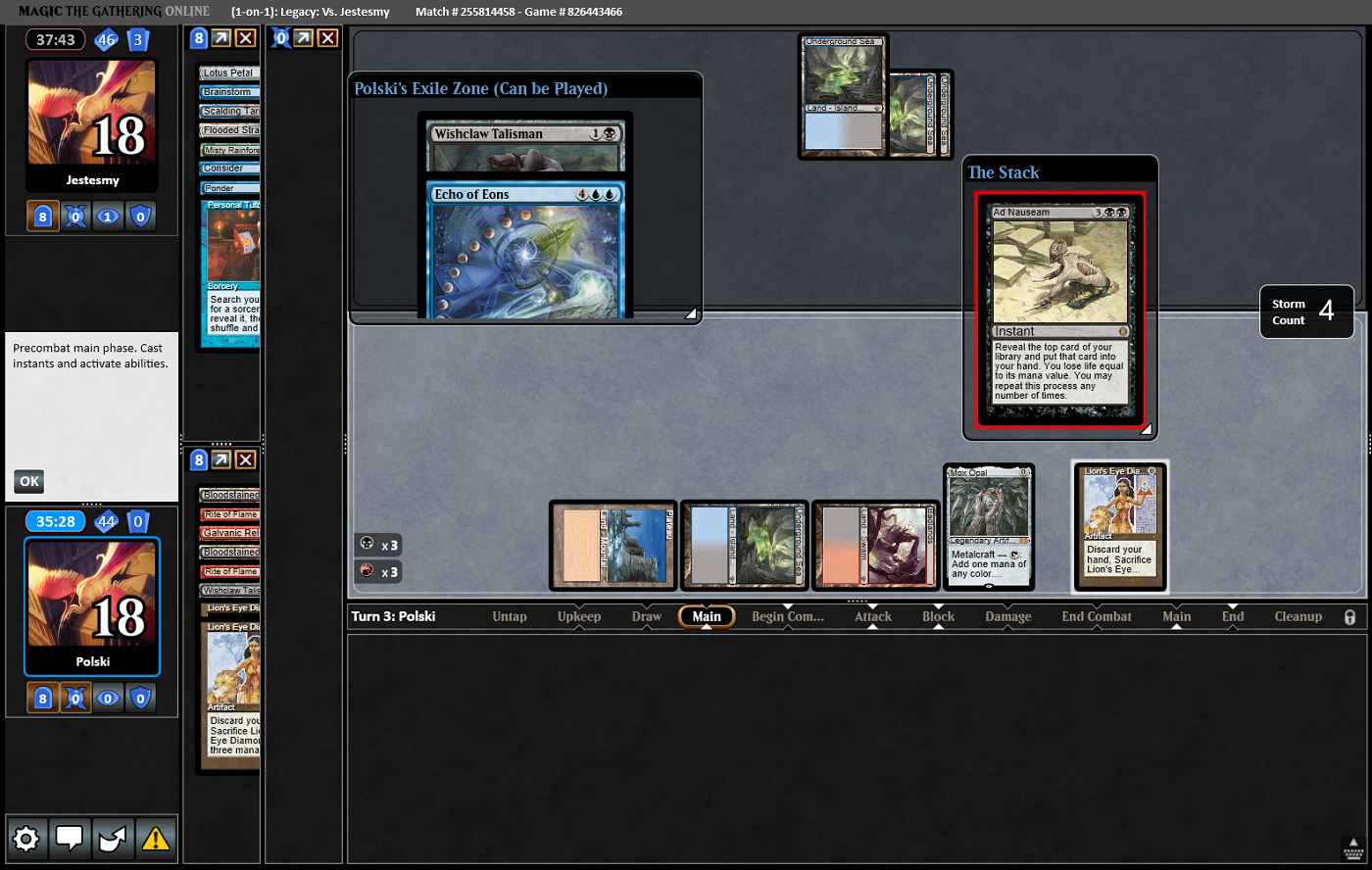 Being at 18 life with 10 starting mana it was easy to win from here. 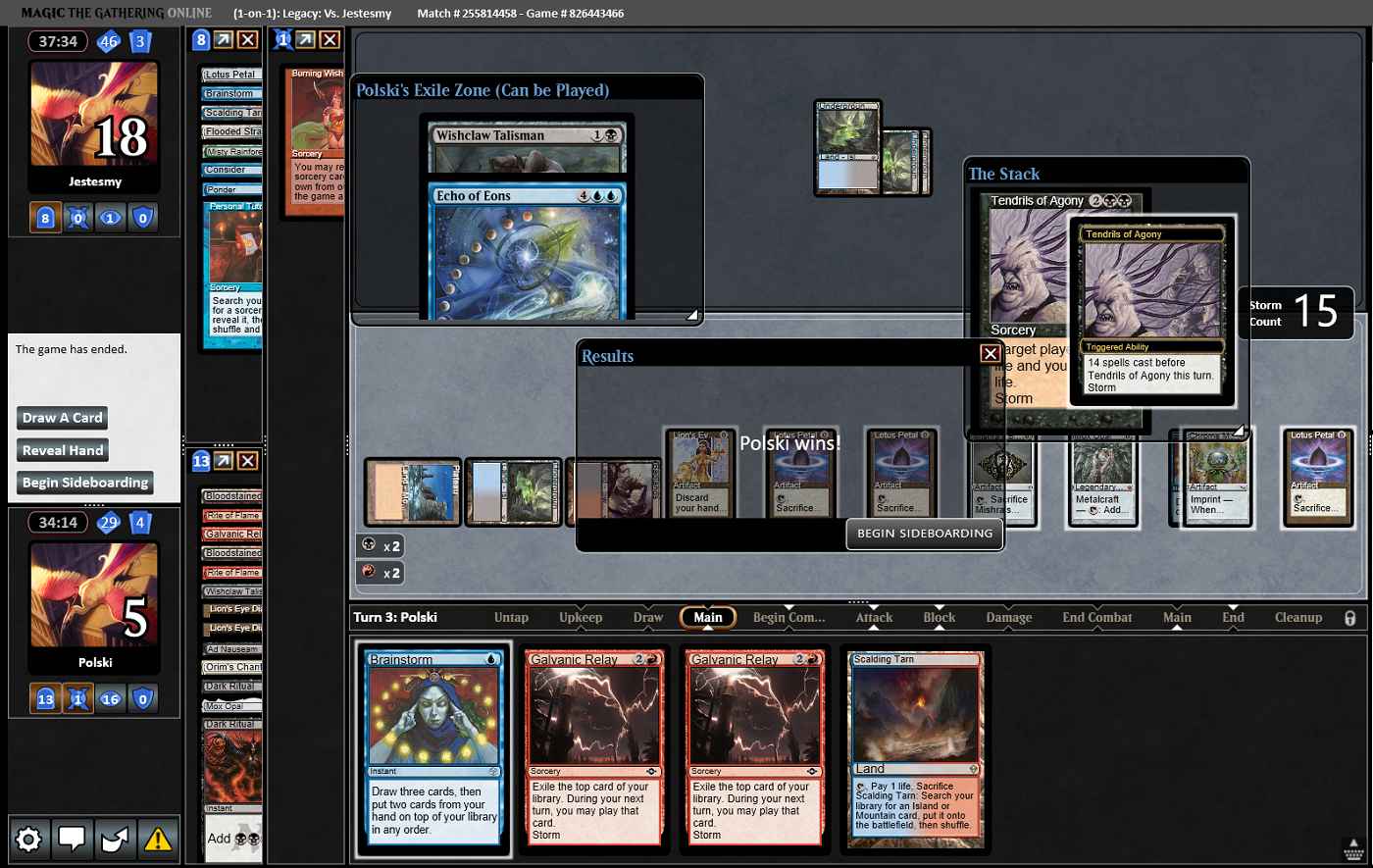 I sideboarded like I recommended, and we were off to the second game. We both took a mulligan, and I kept a hand with some mana, tutors, and a [[Thoughtseize]]. It was pretty slow, but it had all of the tools and potential I was looking for. My opponent began the game with a [[Ponder]]. I spent my turn casting a [[Thoughtseize]] and took [[Personal Tutor]]. 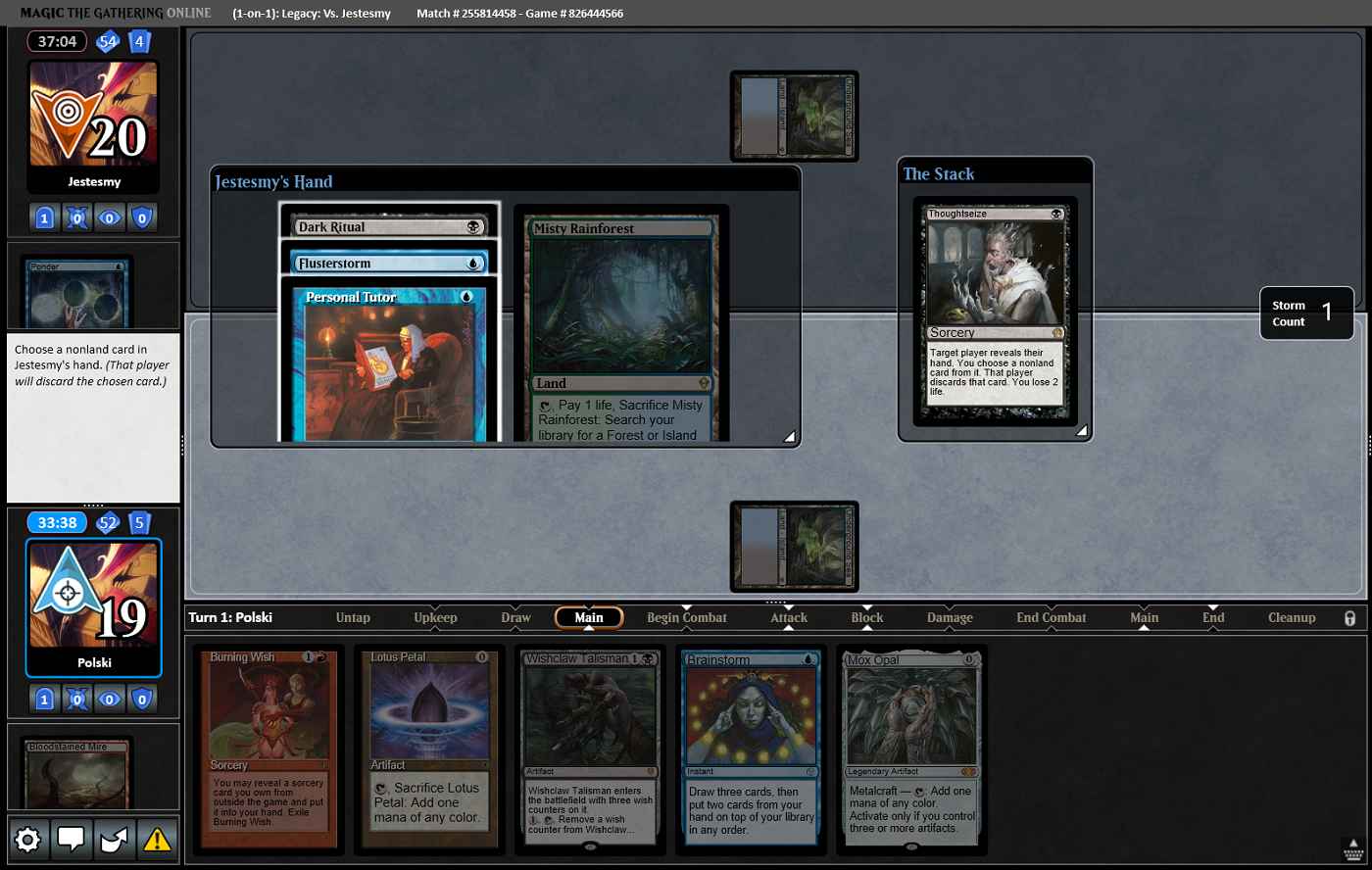 My opponent didn’t cast anything on their second or third turns. I just used my second turn to play some artifact mana and the [[Wishclaw Talisman]] to setup for a third turn combo. I didn’t have a way to beat the [[Flusterstorm]] yet, but I was hoping to draw one or use the [[Brainstorm]] to find one. For my third turn, I drew a [[Silence]]. I knew I probably had very few opportunities to combo before my opponent did, so I wanted this to be the turn. 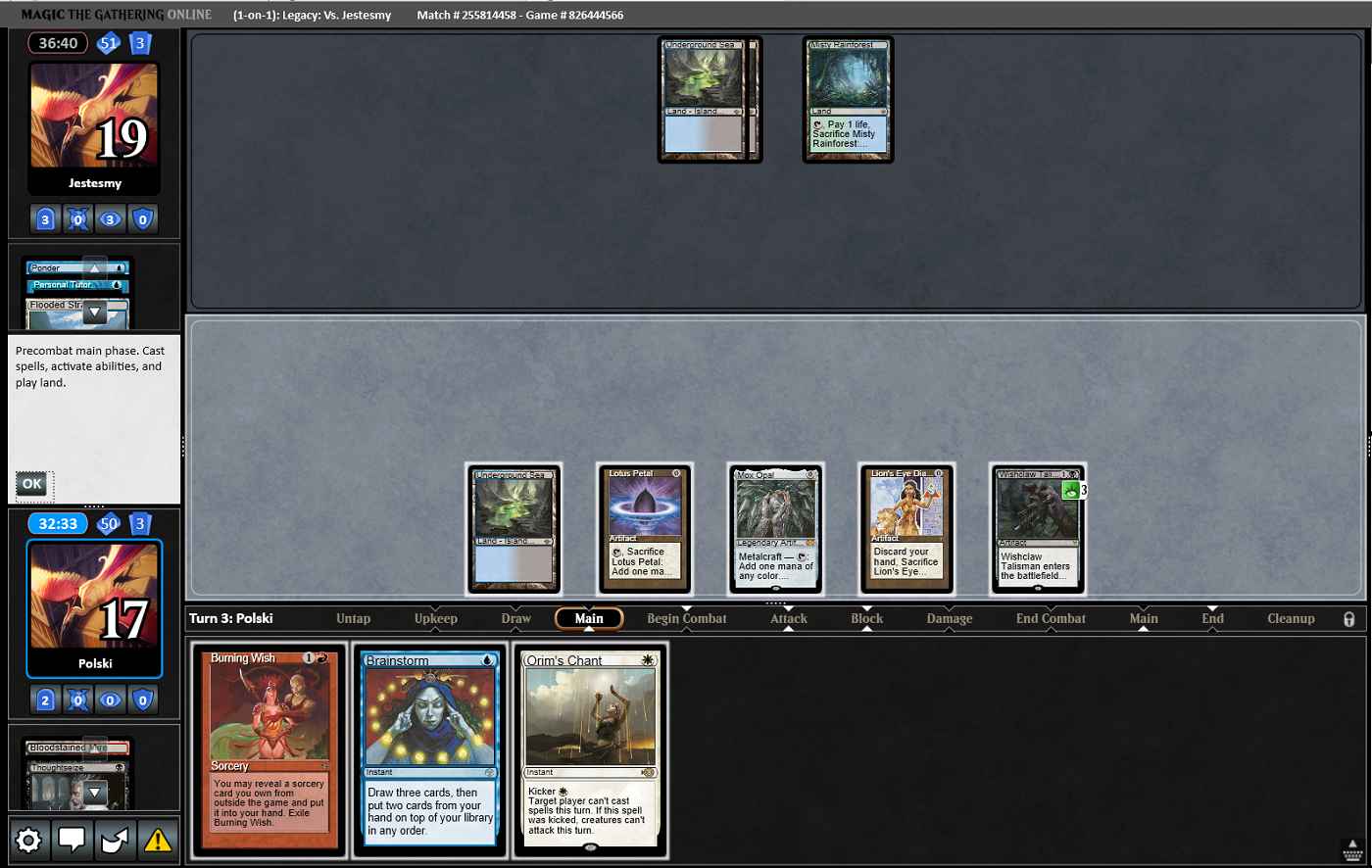 I led off with the [[Silence]] and it resolved. I used the [[Wishclaw Talisman]] to search for [[Echo of Eons]] and paired it with the [[Lion’s Eye Diamond]] to get seven cards. I had unused mana still in play, a land drop, and I drew plenty of more mana and a [[Wishclaw Talisman]]. I cast the [[Brainstorm]] of a [[Lotus Petal]] to sculpt my hand to ensure a victory. I played a land and cast two copies of [[Rite of Flame]]. 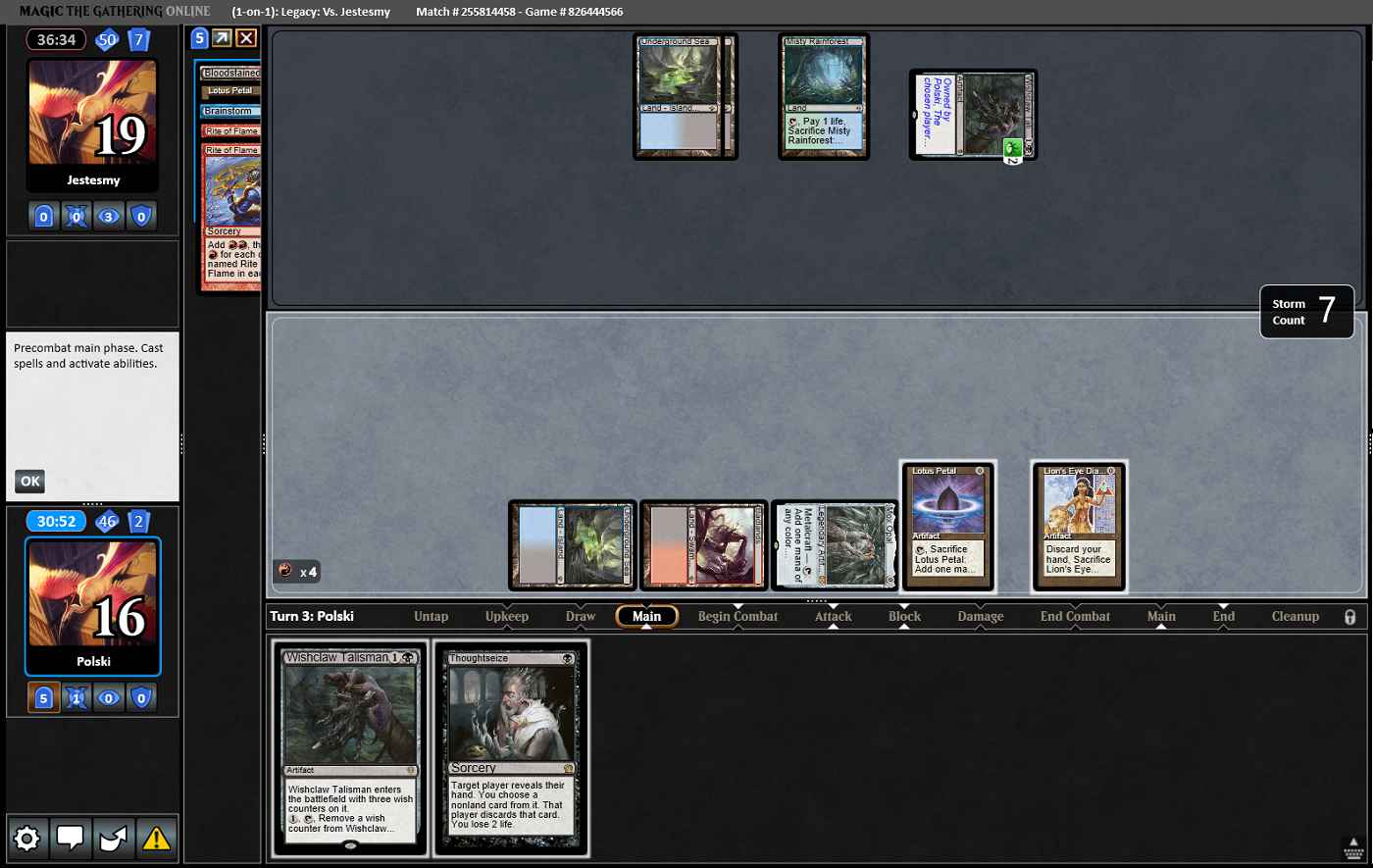 With four red mana floating, a [[Lotus Petal]], a [[Lion’s Eye Diamond]], and seven Storm that was enough to play [[Wishclaw Talisman]] for [[Burning Wish]] into [[Tendrils of Agony]] to win the match. 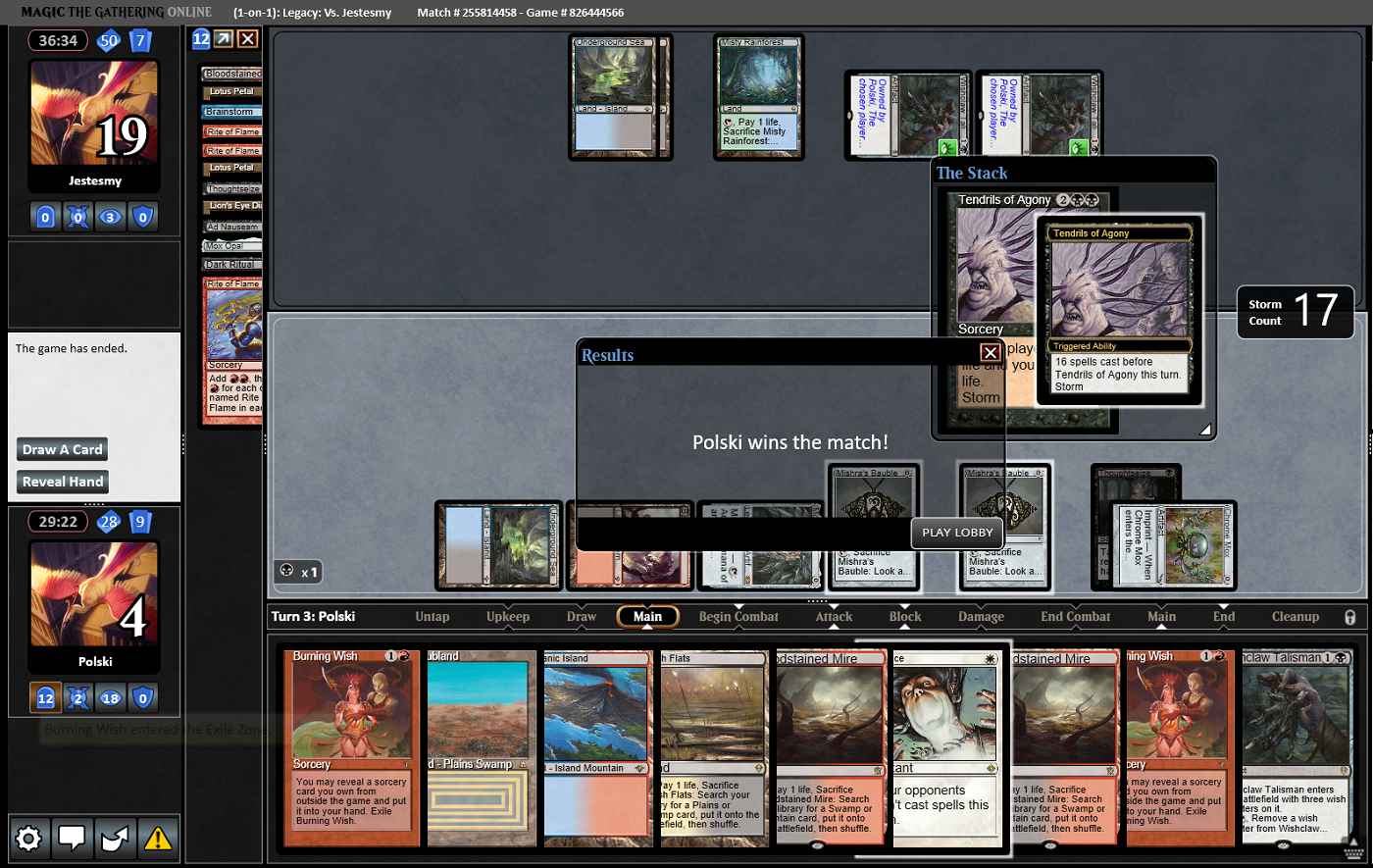 I don’t think I played the first game the best I could have, but there so many different lines to take. I just took the best one I thought of in the moment. I’m sure there were several other better lines and it’s great scenario to discuss and show. Either way it got the job done. These example games didn’t show off Doomsdays strengths or the decks full capabilities, but it shows off the perspective of the TES player well. Being able to combo quickly through counterspells before the opponent can combo, attempting to combo through unknowns because we have to, and using discard to decide if we take their combo piece or their counterspell that we can’t beat. All of these decisions are crucial to determining who wins the game. Making these decisions on the fly without knowing your game plan and your role in the matchup is a recipe for disaster, so I hope you enjoyed this article, can take some of the lessons learned, and apply them to your own playtesting.