Elves is an creature based combo deck, obviously built around the Elf creature type. The main cards it’s trying to abuse are [[Glimpse of Nature]], [[Gaea’s Cradle]], and [[Natural Order]]. They also play a tutor package with [[Natural Order]] and [[Glimpse of Nature]] to search for any disruptive creatures or other elves to develop their board and combo. The creatures they search for to win are [[Craterhoof Behemoth]] and activating [[Allosaurus Shepherd]]. Elves has been a popular Legacy deck for many years and one we should expect to play against, so having a game plan is important.

How does Elves matchup against TES?

[[Heritage Druid]], [[Nettle Sentinel]], [[Glimpse of Nature]] – The deck is named Elves for a reason, because the deck is based around them and playing many of them. Several mana producing and cheap elves with a [[Glimpse of Nature]] can make the deck go crazy drawing many cards and assembling many creatures on the battlefield. This is what the deck was designed to do, and it’s hard for any deck to beat once it gets going.

[[Natural Order]], [[Green Sun’s Zenith]], [[Once Upon a Time]] – Elves plays many tutors and they use them for different reasons, sometimes to continue a combo, assemble their initial mana sources, a way to win the game with [[Craterhoof Behemoth]], or to find a disruptive creature to prevent the opponent from winning such as [[Archon of Valor’s Reach]] and [[Collector Ouphe]]. This is what makes Elves so consistent.

[[Force of Vigor]], [[Mindbreak Trap]] – The Elves sideboard has some really good cards against TES. Being able to destroy artifacts with [[Force of Vigor]] can be brutal if we play artifacts out in turns before we combo or the turn we are comboing before we planned on using them. [[Mindbreak Trap]] is also great against storm. Being zero mana and us not having discard spells to see their hand means we always have to respect the possibility they could have one in hand. It also means we have to leave some number of [[Veil of Summer]] and [[Defense Grid]] in our deck just so we have some way to beat it.

Typically against creature decks, we may think we have some time to combo off. While we aren’t under pressure to combo on turn one, as the turns go on the opponent can have some powerful turns of their own. By turns 2-4, the opponent can assemble their own combo or begin to play some creatures that disrupt us. Our goal should be to try and win before our turn three. Once the opponent gets to their turn three, they can win out of nowhere with any of their win conditions, and they’ll be able to start finding disruptive creatures like [[Archon of Valor’s Reach]] and [[Collector Ouphe]]. We don’t have much to disrupt them or protect our combo, so when evaluating opening hands we need to consider speed and how quickly the hand can combo. In postboard games, we have some disruption to bounce or destroy their creatures, but we don’t want to rely heavily on them.

Against Elves, their main disruption is going to be in the form of creatures. With naturally drawing creatures to cast them, [[Green Sun’s Zenith]], and [[Natural Order]], there are many ways to find a disruptive creature to stop us from comboing. This means we will have to be able to answer permanents, so adding in [[Abrupt Decay]] and [[Chain of Vapor]] is a must. Elves can also play [[Force of Vigor]] and [[Mindbreak Trap]], so we need to keep some number of [[Veil of Summer]] and [[Defense Grid]] in the deck. We don’t need the full five though, so I take some number of them out.

We started the match off with me being on the play and keeping a six card hand with several cantrips, mana, and an [[Ad Nauseam]]. Not the fastest hand, but it had the potential of a turn 2-3 [[Ad Nauseam]], so I kept. I spent my turn one playing a [[Ponder]] and shuffling, and my opponent played a [[Heritage Druid]] for their first turn. On my second turn, I cast a [[Brainstorm]] looking for some rituals to cast [[Ad Nauseam]]. I decide to put back one [[Chrome Mox]] and a [[Brainstorm]]. 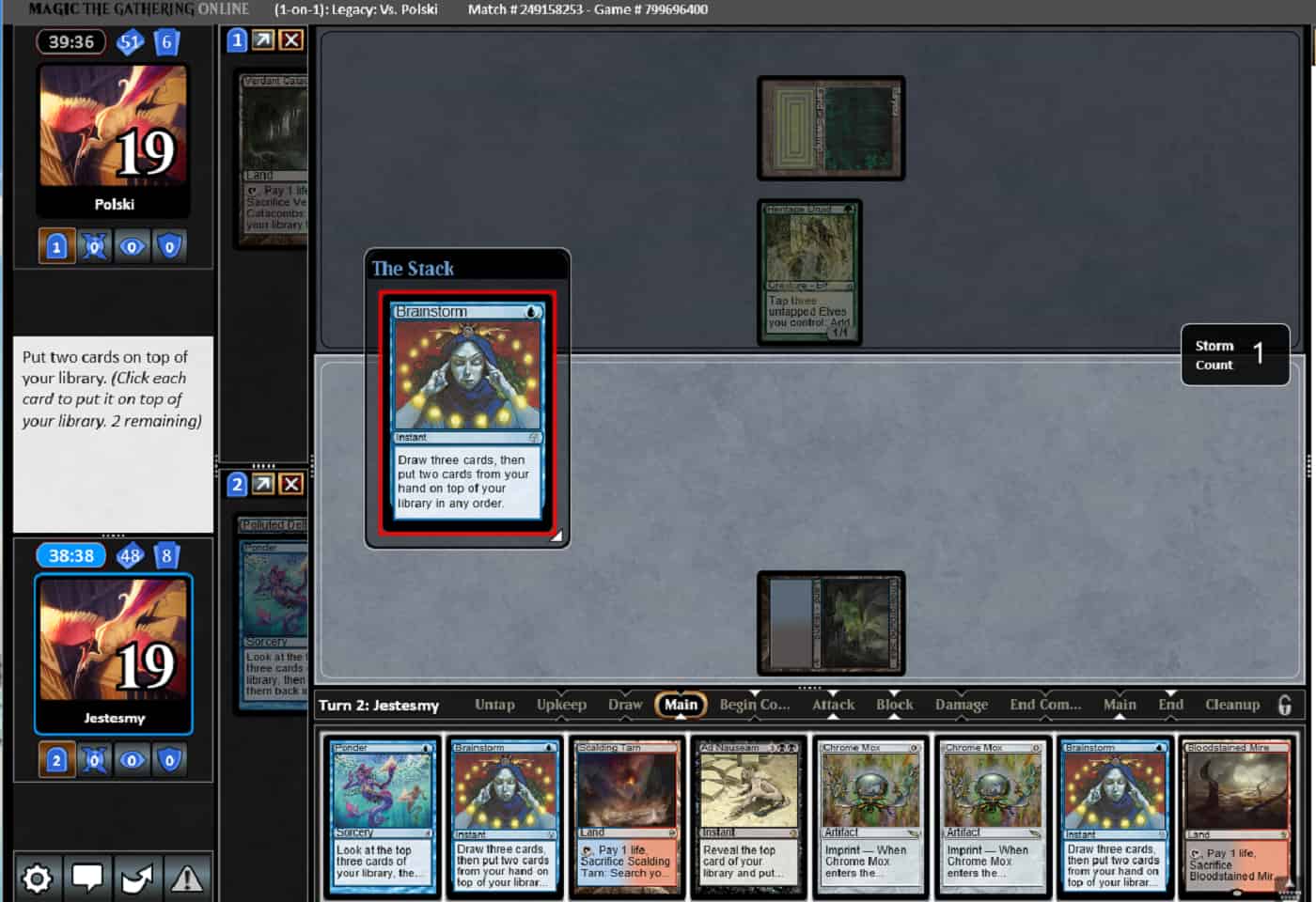 To finish my second turn, I played a fetchland and sacrificed it to clear the top of my deck, and then cast my [[Ponder]] looking for another ritual to cast [[Ad Nauseam]] on my next turn. The top three had a [[Rite of Flame]], so I kept them on top and drew it. My opponent played an [[Elvish Visionary]] on their second turn. I was expecting an explosive turn three for them with the [[Heritage Druid]]. 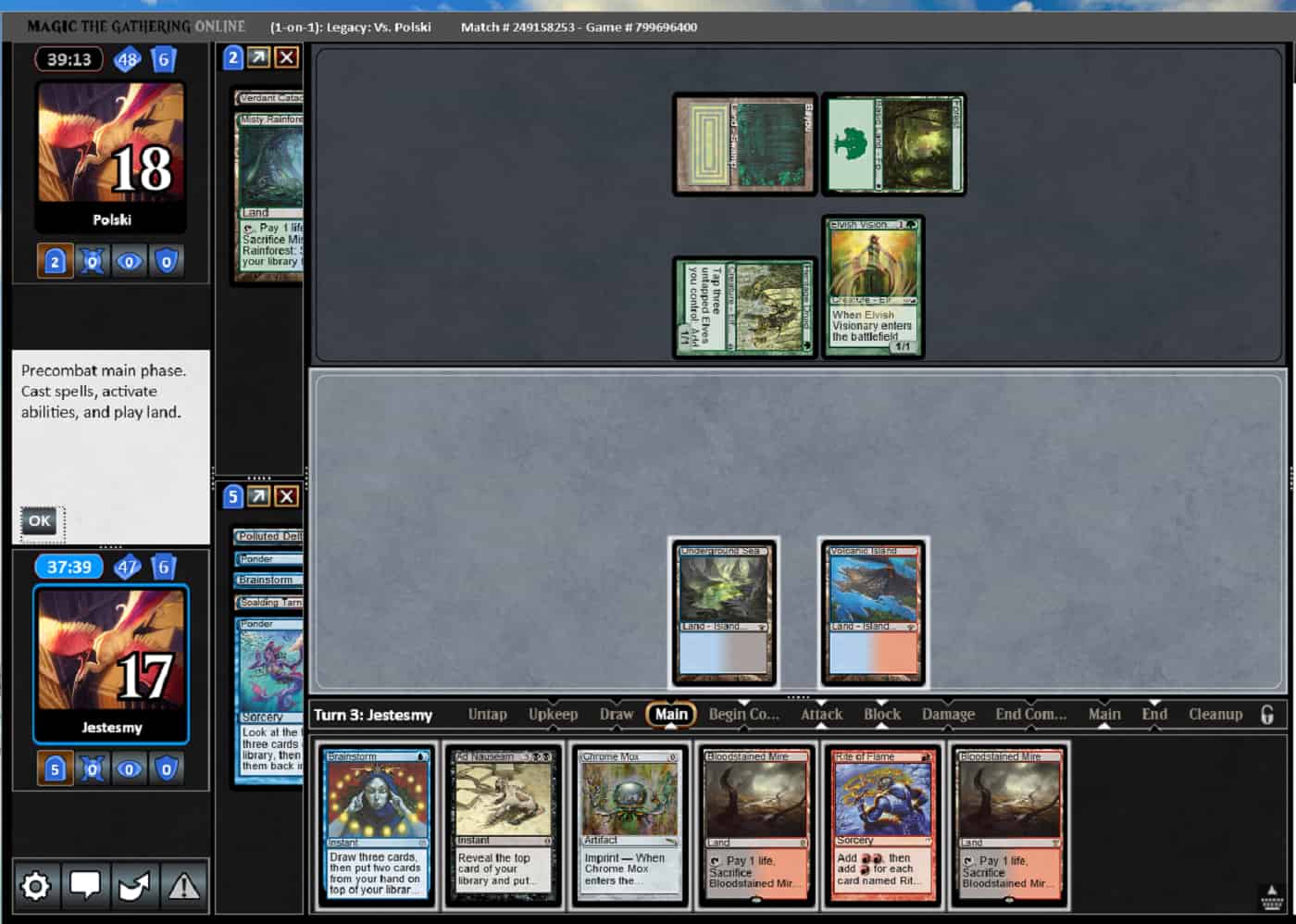 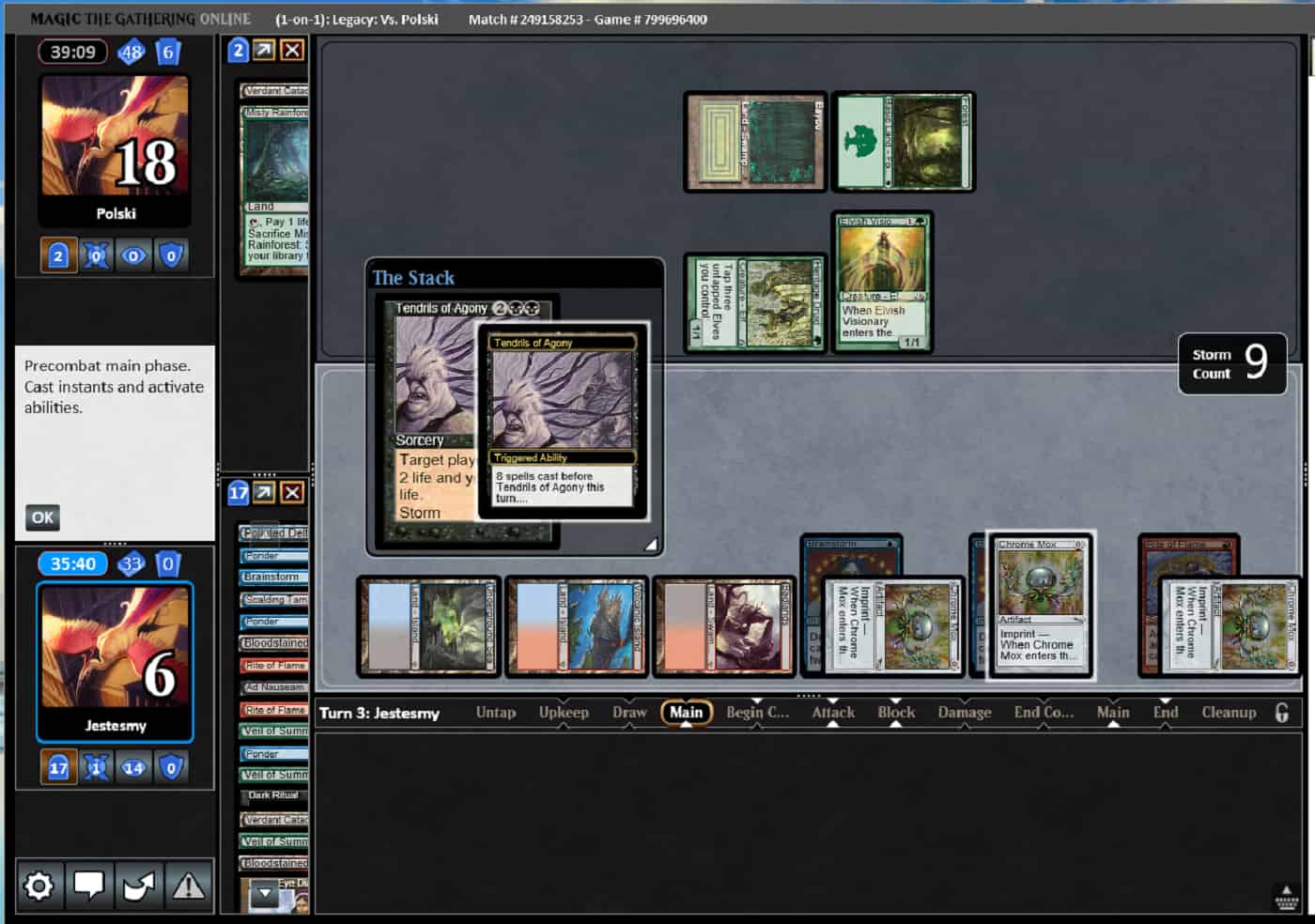 For the second game, my opponent was on the play and kept their opening seven. I sideboarded like I recommended, and mulliganed down to six cards and kept a hand with [[Burning Wish]], [[Lotus Petal]], [[Chrome Mox]], [[Brainstorm]], and two lands. It’s a little slow, but it has all the pieces and a [[Brainstorm]] to find some interaction or acceleration. My opponent used their first turn to play a [[Dryad Arbor]], and then on their second turn, they played a [[Gaea’s Cradle]], [[Birchlore Rangers]], [[Elvish Visionary]], and a [[Allosaurus Shepherd]]. This set them up to probably win on their third turn. 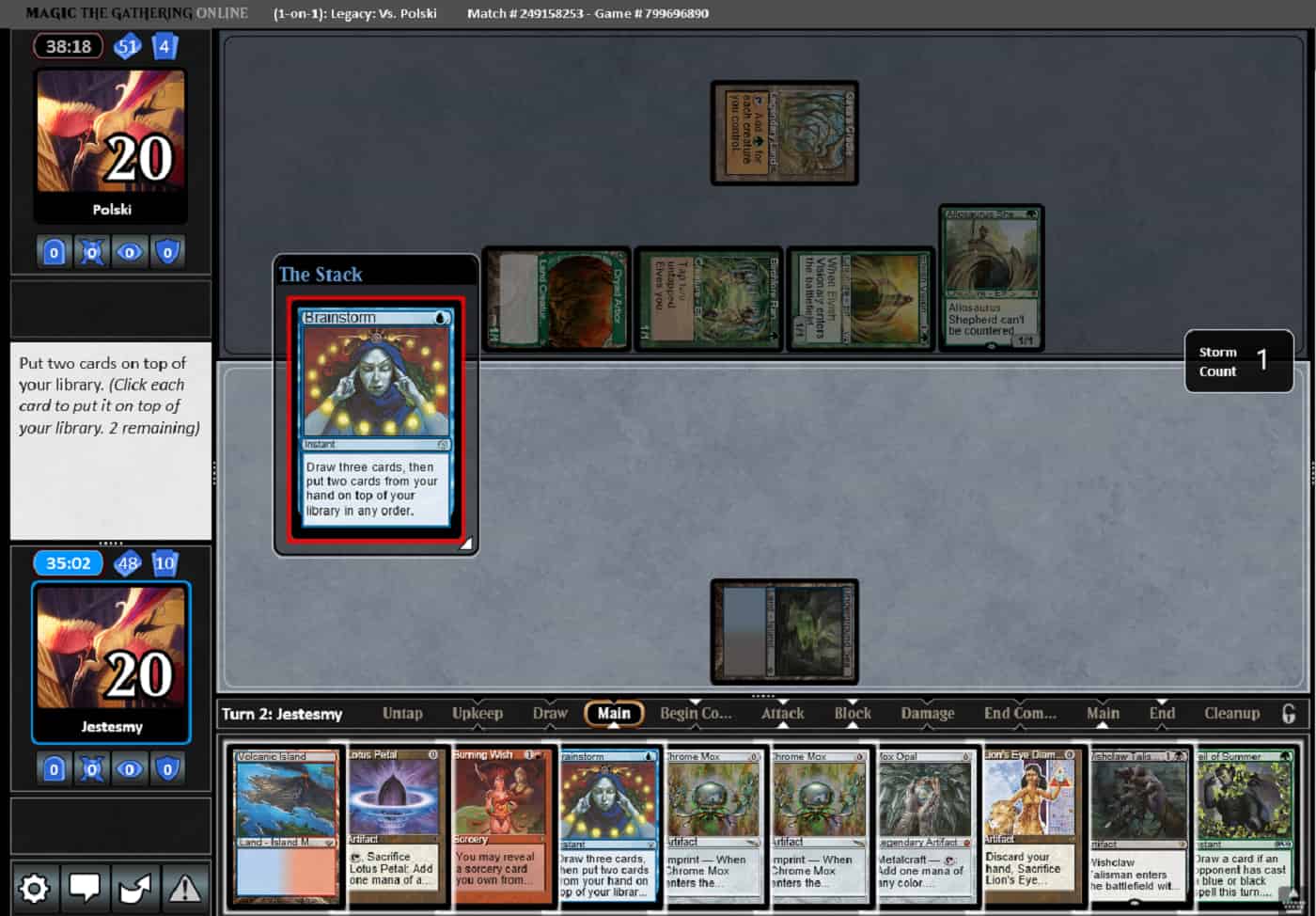 I decided to put back a [[Chrome Mox]] and the [[Veil of Summer]]. With my land, [[Lotus Petal]], [[Lion’s Eye Diamond]], [[Chrome Mox]], and [[Mox Opal]] is seven mana. That was enough to [[Burning Wish]] for [[Echo of Eons]] and have two mana floating. The seven cards I drew were pretty perfect. Three rituals and mana sources, and then the [[Tendrils of Agony]] to win the game. 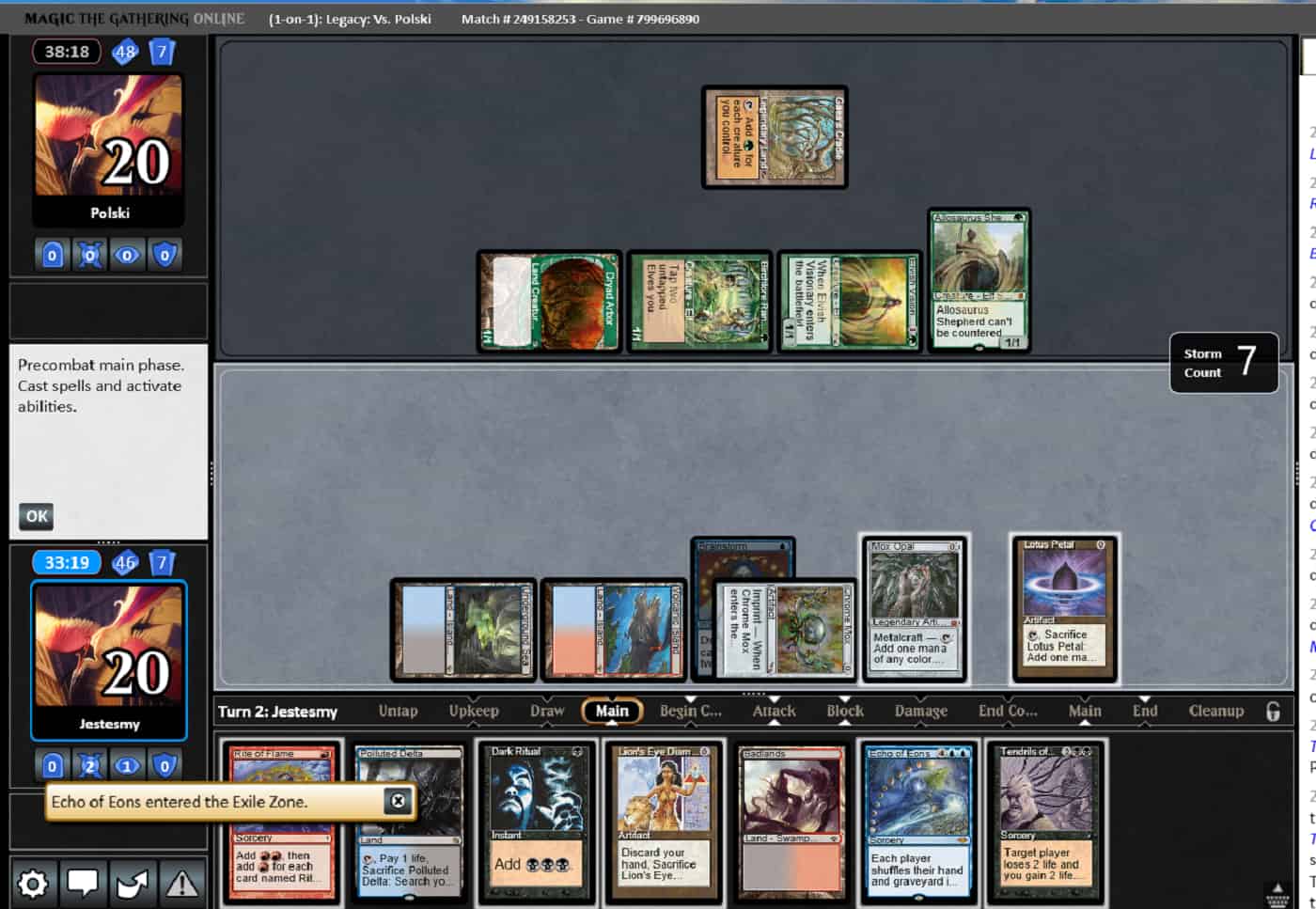 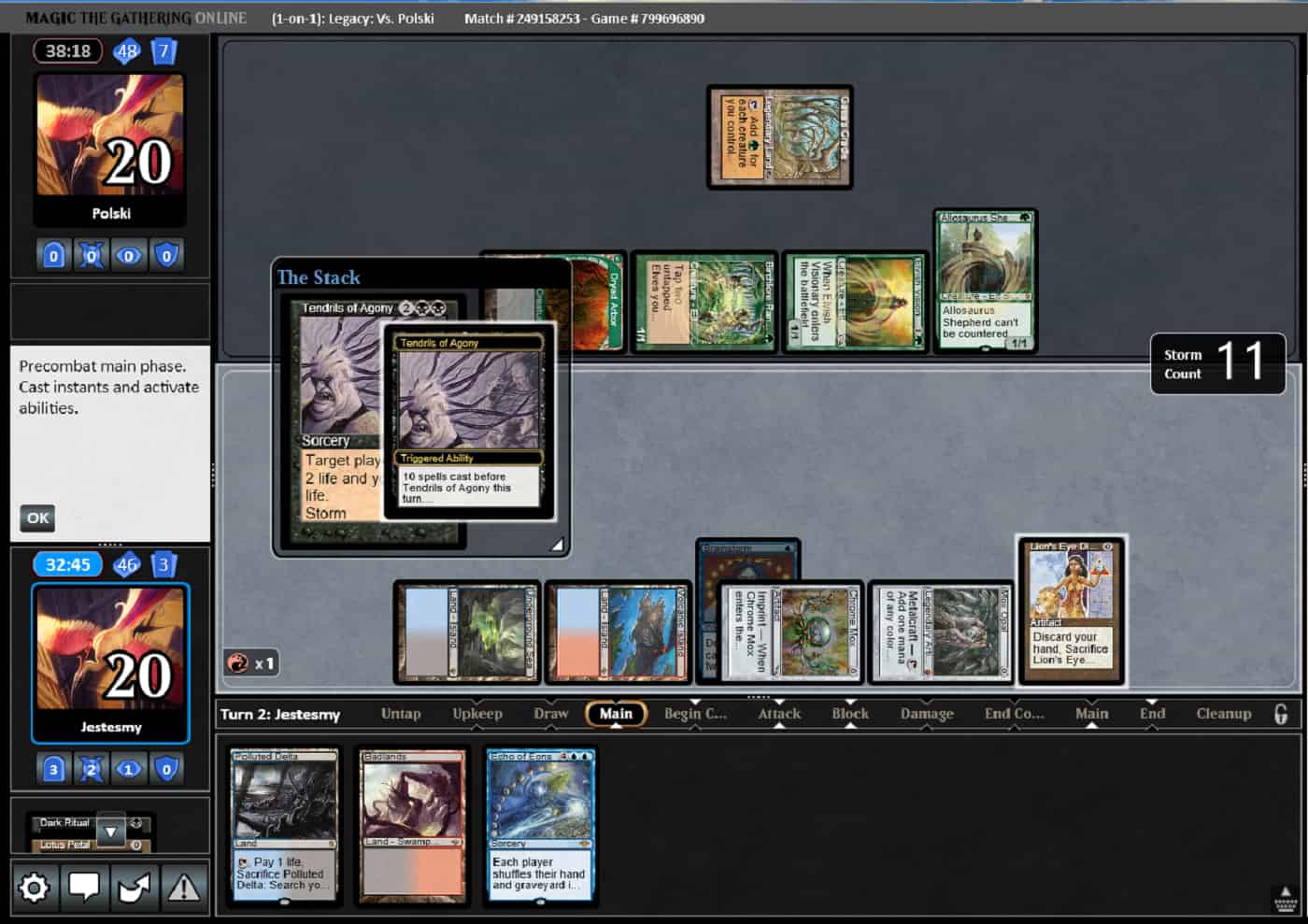 
Unfortunately for Elves, this match went how this matchup typically plays out. Elves just doesn’t have much they can do on the first and second turns of a game. Against a deck that can win on those turns, it doesn’t play out well for them. Once the game develops into some of the later turns, that’s when Elves is favored. They have many tutors for their disruptive creatures and can win the game out of nowhere. That is why TES needs to try and win on the beginning turns, and the TES main deck is designed to do just that. I hope you enjoyed this article, can take some of the lessons learned, and apply them to your own playtesting.