How does Goblins matchup against TES?

[[Goblin Lackey]], [[Warren Instigator]], [[Muxus, Goblin Grandee]] – These are the creatures that allow for such explosive draws. Being able to put creatures from their hand or deck into play for free is such a powerful ability. This is the pressure we have to worry about, and it forces us to keep faster hands.

[[Goblin Cratermaker]], [[Goblin Trashmaster]] – Goblins has more utility than just attacking and blocking. Another way they can interact is to destroy artifacts. Now, this may seem easy to try and play around by just keeping the artifacts in our hand until the turn we combo off, but there’s one problem with that. I often play out my artifacts on turn one, or as quickly as I can, to avoid a [[Chalice of the Void]] on zero. That’s a good plan, but they could be destroyed before we’re ready to use them.

Most of the games come down to racing. Goblins is going to try to put as much power into play as early as they can, and TES is going to try to combo off as quickly as possible. This makes the first two turns critical in the matchup. If they have a turn- one [[Chalice of the Void]], [[Goblin Lackey]], or both, that’s a very good start to set Goblins up to win the game. Conversely, if TES has a turn one or two combo then obviously that’s going to be good enough to win most games. The main disruptors that we have to worry about are [[Chalice of the Void]] or [[Mindbreak Trap]]. The way we beat [[Mindbreak Trap]] is to leave in [[Defense Grid]], and sometimes just hope they don’t have it. [[Chalice of the Void]] is a little easier to beat by bringing in [[Abrupt Decay]] and [[Chain of Vapor]]. We can also play out all of our artifacts on turn one before they get the chance to cast it. If they put a [[Chalice of the Void]] for one, we will need to rely heavily on our artifacts. Trying to do this while playing under a fast clock can be challenging, but the best way to beat Goblins is to have a fast draw.

[[Veil of Summer]] is an easy cut here. It doesn’t do anything at all, so hopefully we don’t draw any game one. I bring in both copies of [[Abrupt Decay]] and [[Chain of Vapor]] because outside of [[Mindbreak Trap]], the opponent is a permanent-based deck. The permanent that is the biggest concern of mine is [[Chalice of the Void]]. The rationale to leave in [[Defense Grid]] is that the opponent will be bringing in [[Mindbreak Trap]], and we need some way to beat it.

For the first game, I was on the play and kept a good seven-card hand. It had the ability to flashback [[Echo of Eons]] on turn one. The downside here was if the new hand can’t win, then the opponent has access to [[Wishclaw Talisman]] to play a [[Chalice of the Void]] on their first turn.

The new hand was pretty good, but just a little short of continuing this turn. I had the resources to win on the following turn, but I knew my opponent would probably use the [[Wishclaw Talisman]] and play a [[Chalice of the Void]] on zero for their turn, so I played out both copies of [[Lion’s Eye Diamond]] before passing the turn. 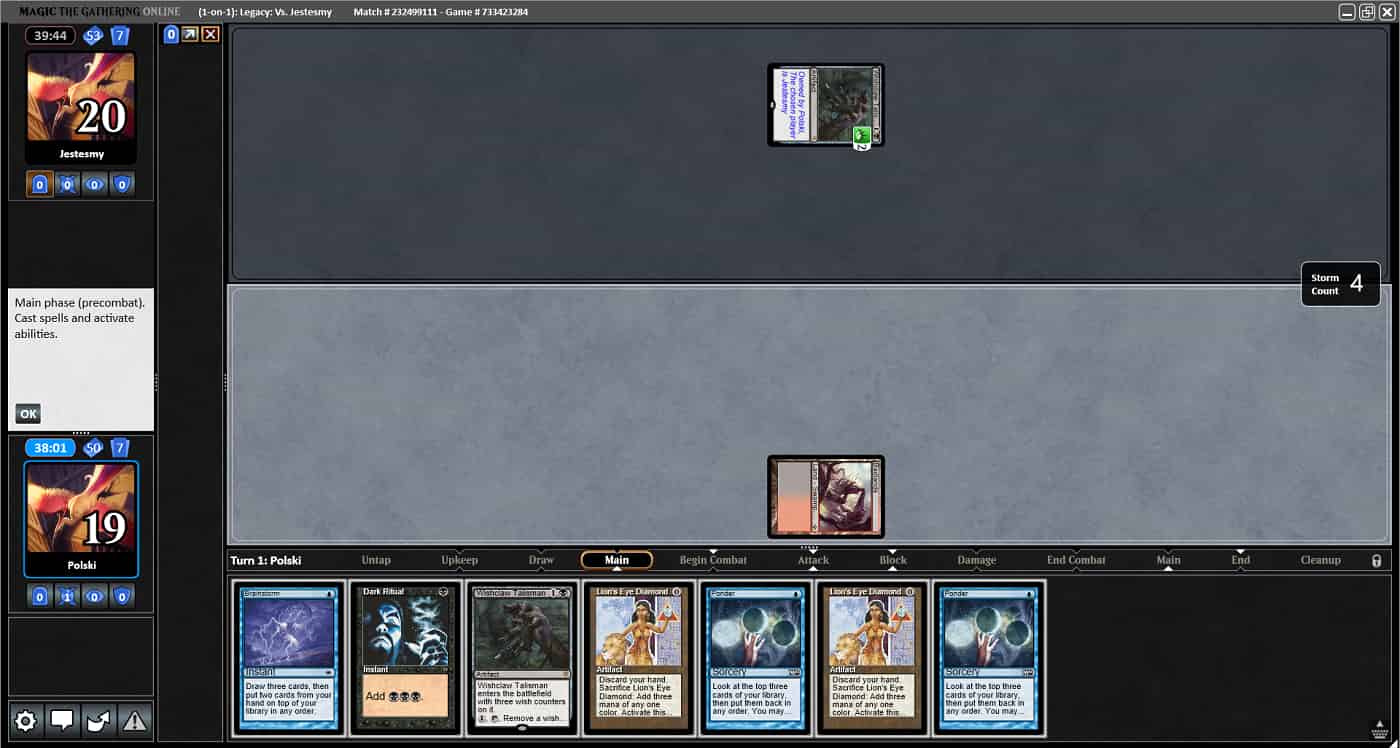 That is the exact line that the opponent took. On my turn, I was able to use the [[Dark Ritual]] and then sacrifice both copies of [[Lion’s Eye Diamond]] for three red and three black mana. I then used the [[Wishclaw Talisman]] that my opponent gave back to me to search for [[Ad Nauseam]] and cast it. 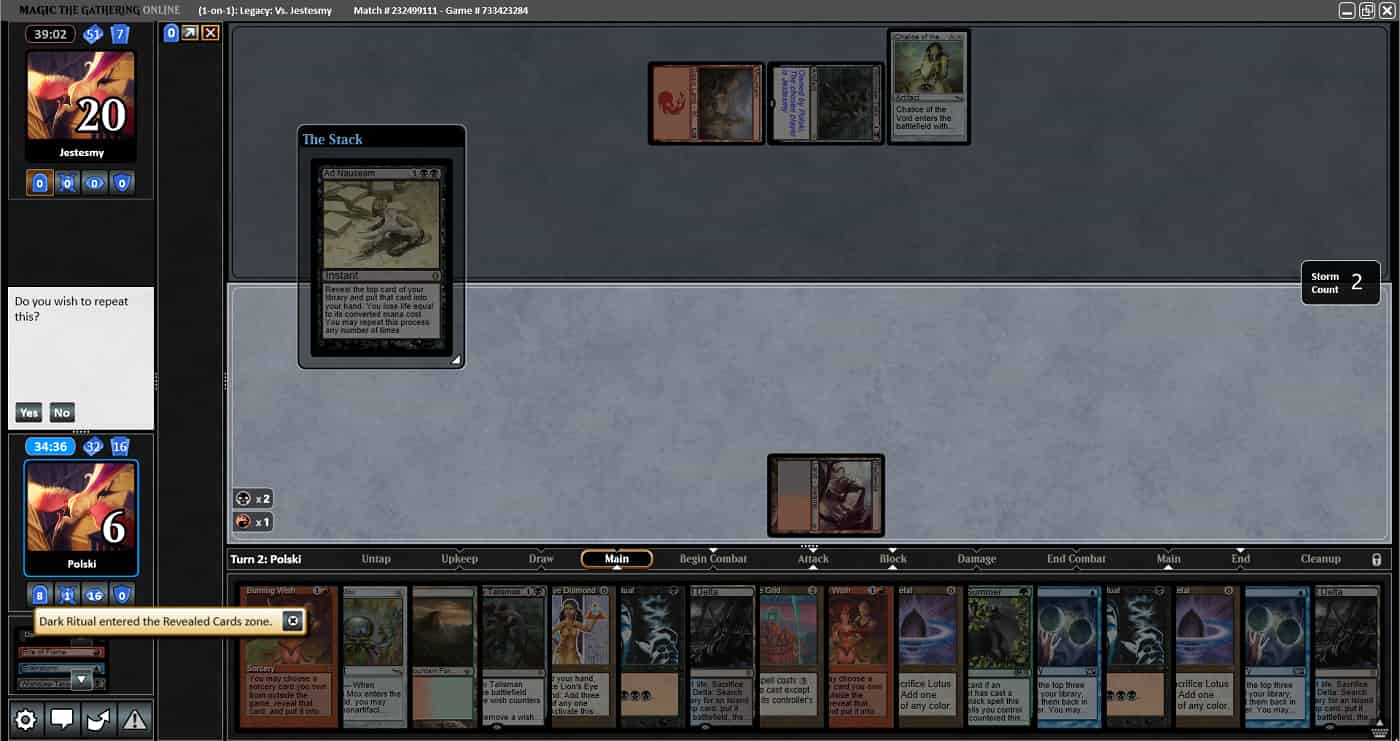 In order for me to get to enough Storm, I had to play out the zero-mana artifacts to get countered, but that was alright because I didn’t need them. Then I used both copies of [[Dark Ritual]] to cast [[Burning Wish]] for [[Tendrils of Agony]].

For the second game, I sideboarded as I mentioned above, and had to mulligan down to six cards. My opponent just played a land on their first turn and passed. On my first turn, I led off with a [[Ponder]]. I had a tough decision to make with the top three cards, but I decided to keep them and hoping to combo off two turns from then. 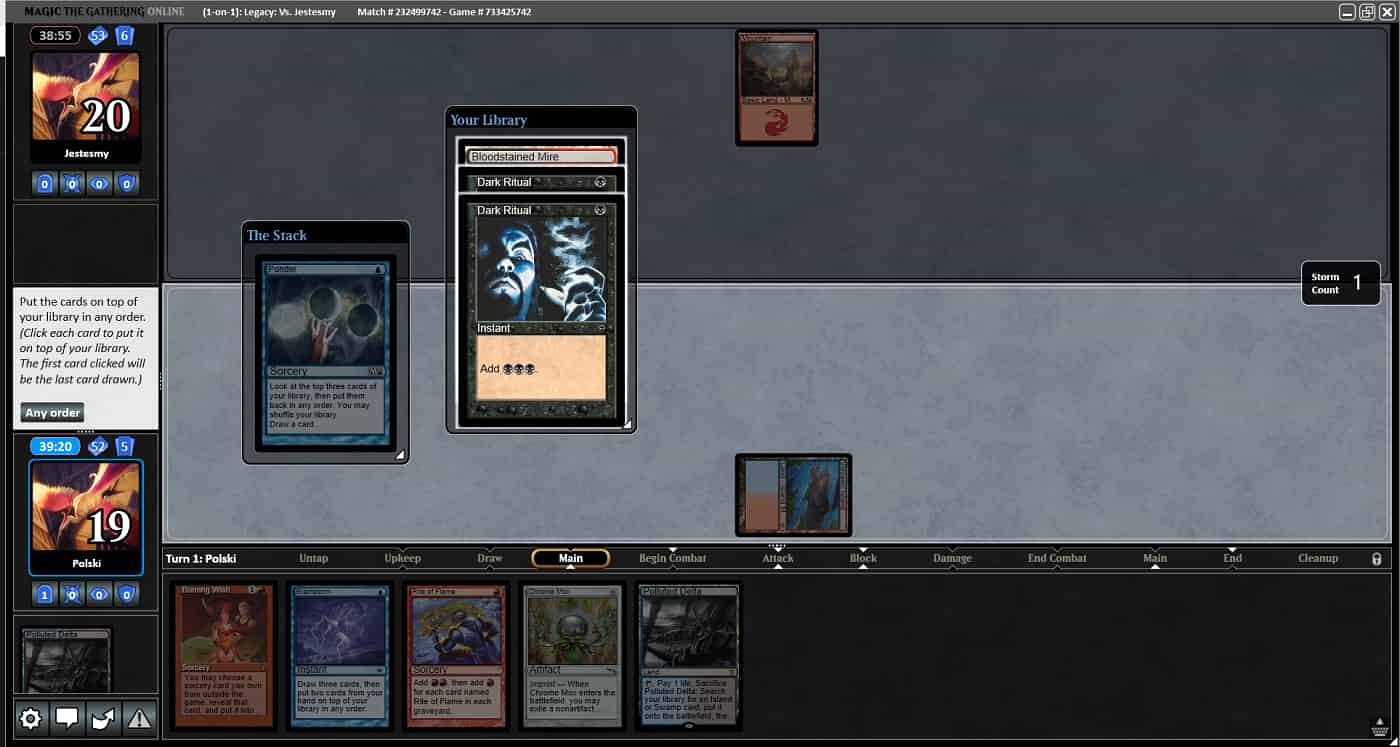 On my opponent’s second turn, they played a [[Warren Instigator]]. This would mean their turn three would be an explosive one. I knew the top cards of my library, so I knew I wouldn’t have a way to interact. 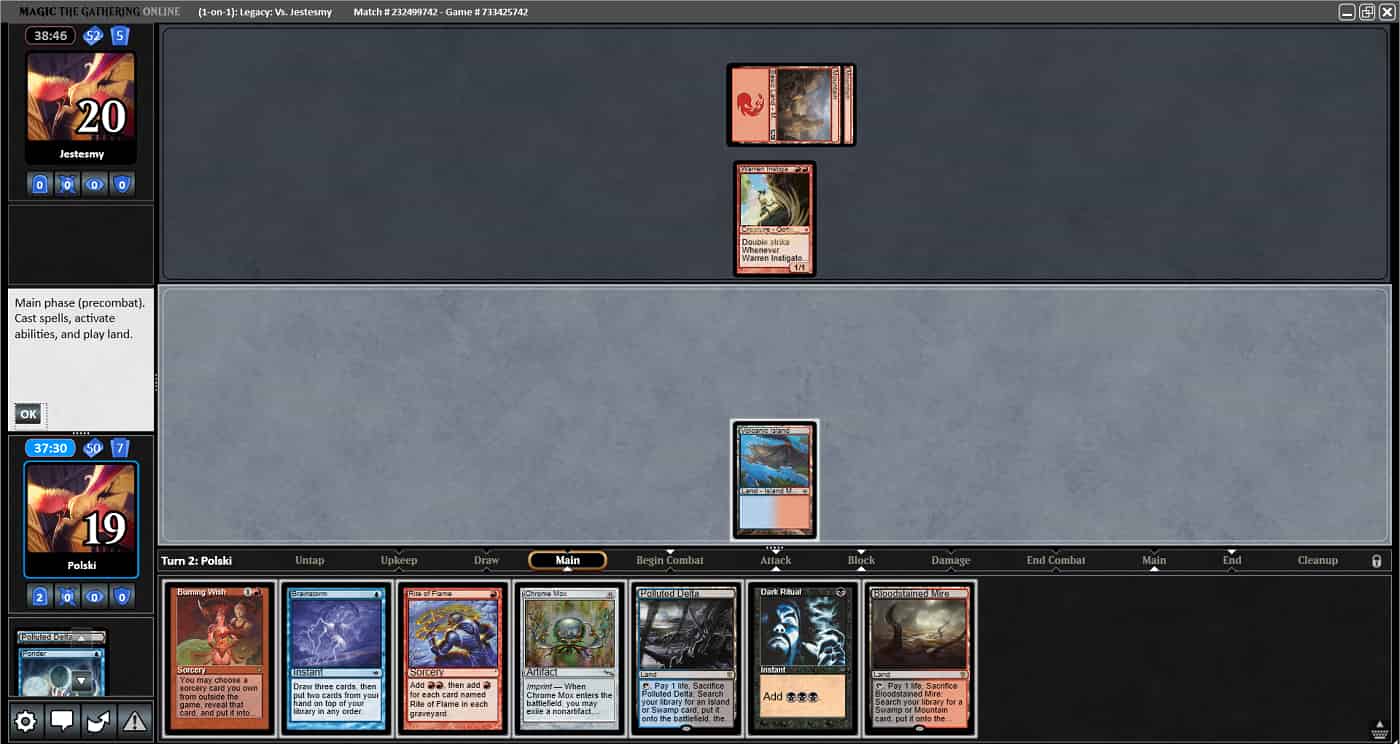 On my turn, I cast the [[Brainstorm]] and put back the extra [[Burning Wish]] and land. I then played and sacrificed a fetch land to shuffle my library. I couldn’t win from this point, so I just had to pass the turn back and take the big hit I knew would come.

During my opponent’s turn, my opponent played a [[Goblin Matron]] and then attacked to put two more goblins into play. 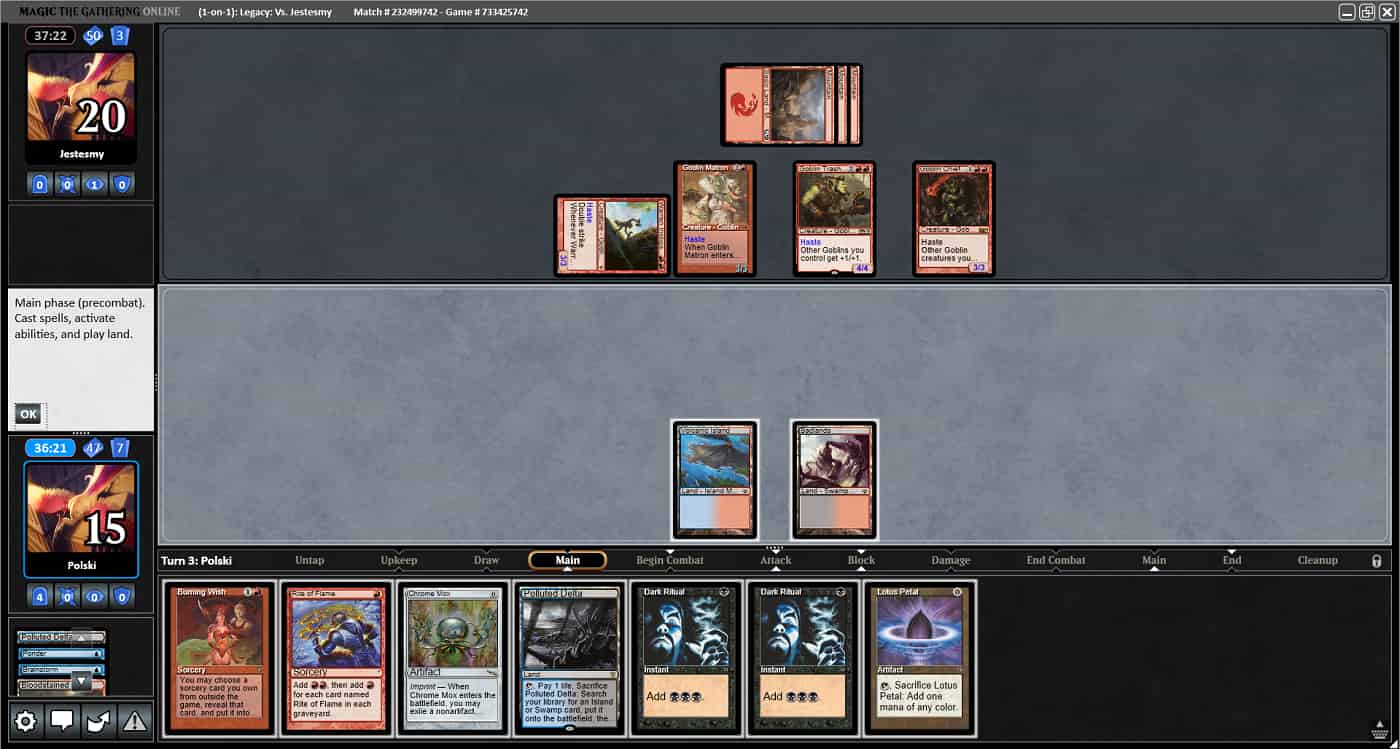 On my next turn, I drew a [[Lotus Petal]] for the turn. I needed to be able to combo this turn because I was pretty sure I would lose if my opponent got another turn. I had access to nine mana, and after casting a [[Burning Wish]], I would have seven mana. For some reason I thought I was a single mana short of [[Peer into the Abyss]]. I just didn’t see a way to win here, so I passed the turn back and died on their turn. 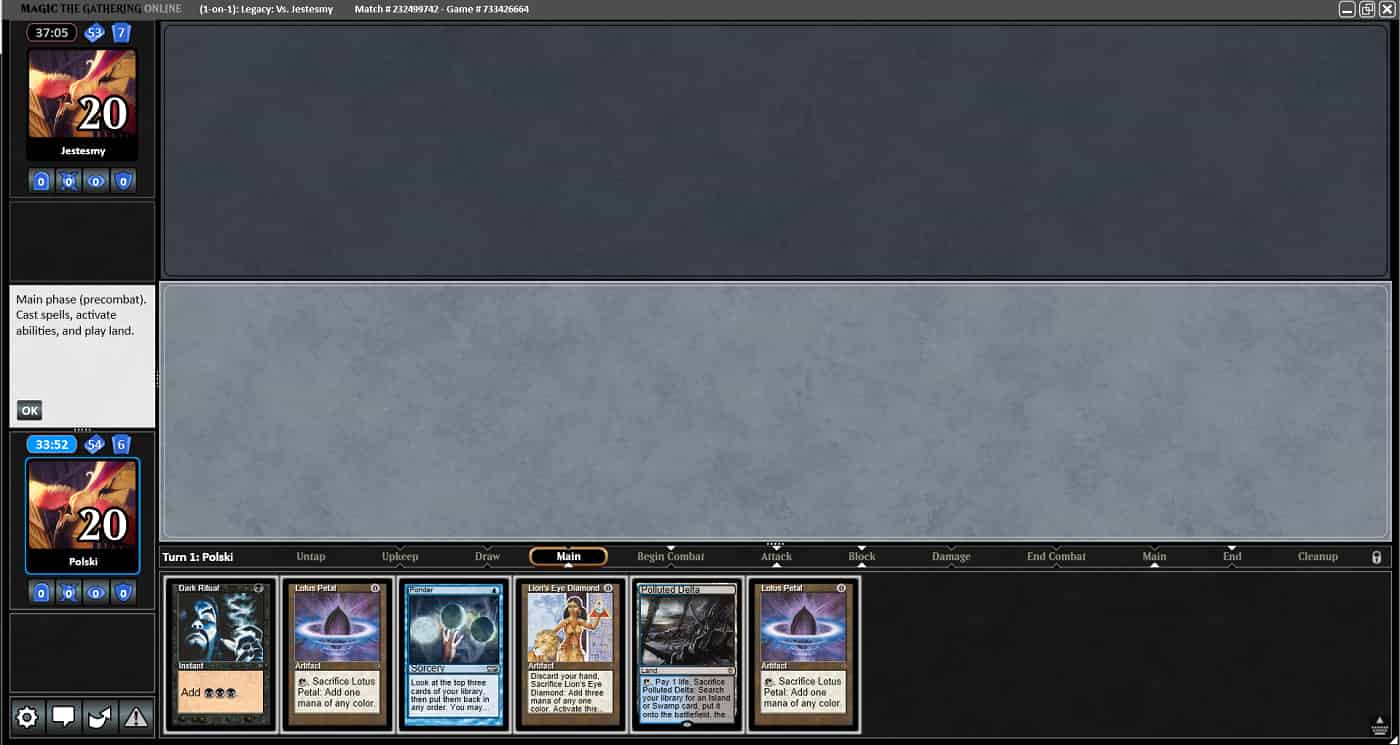 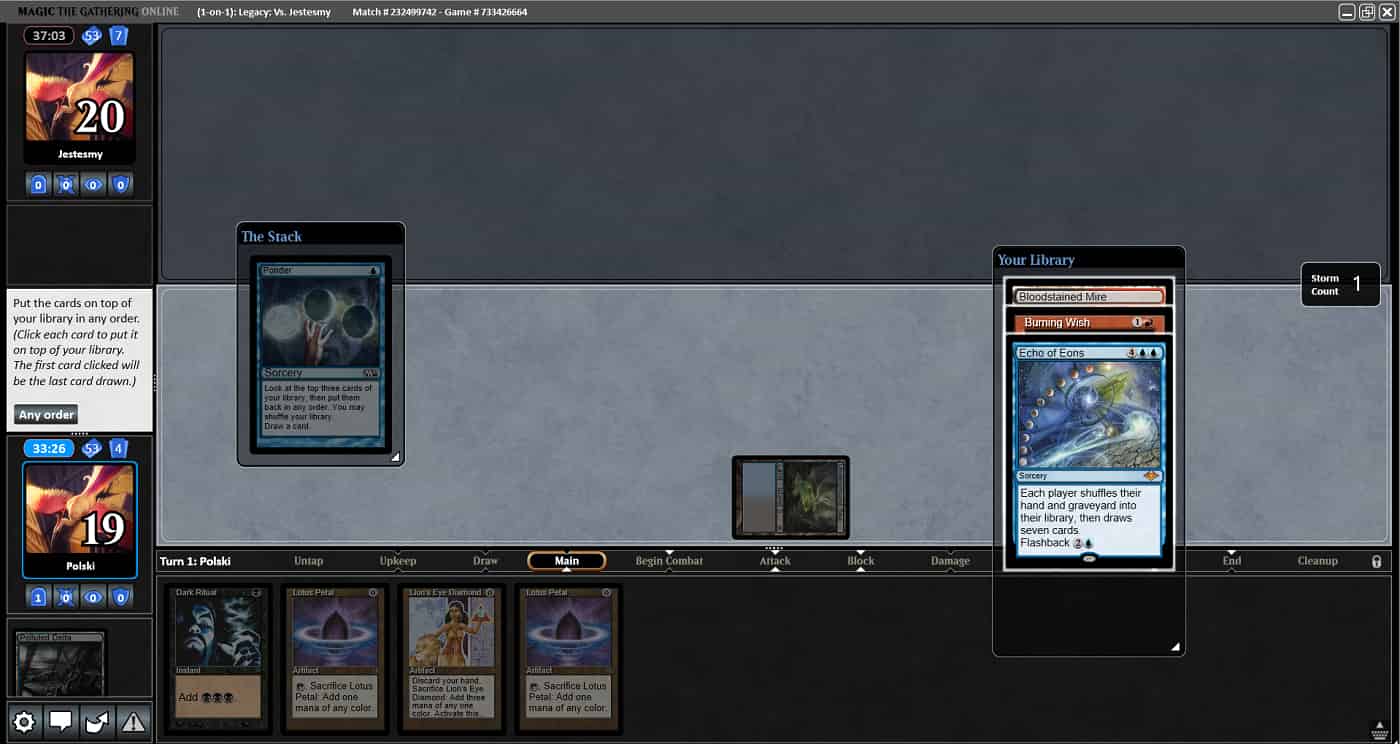 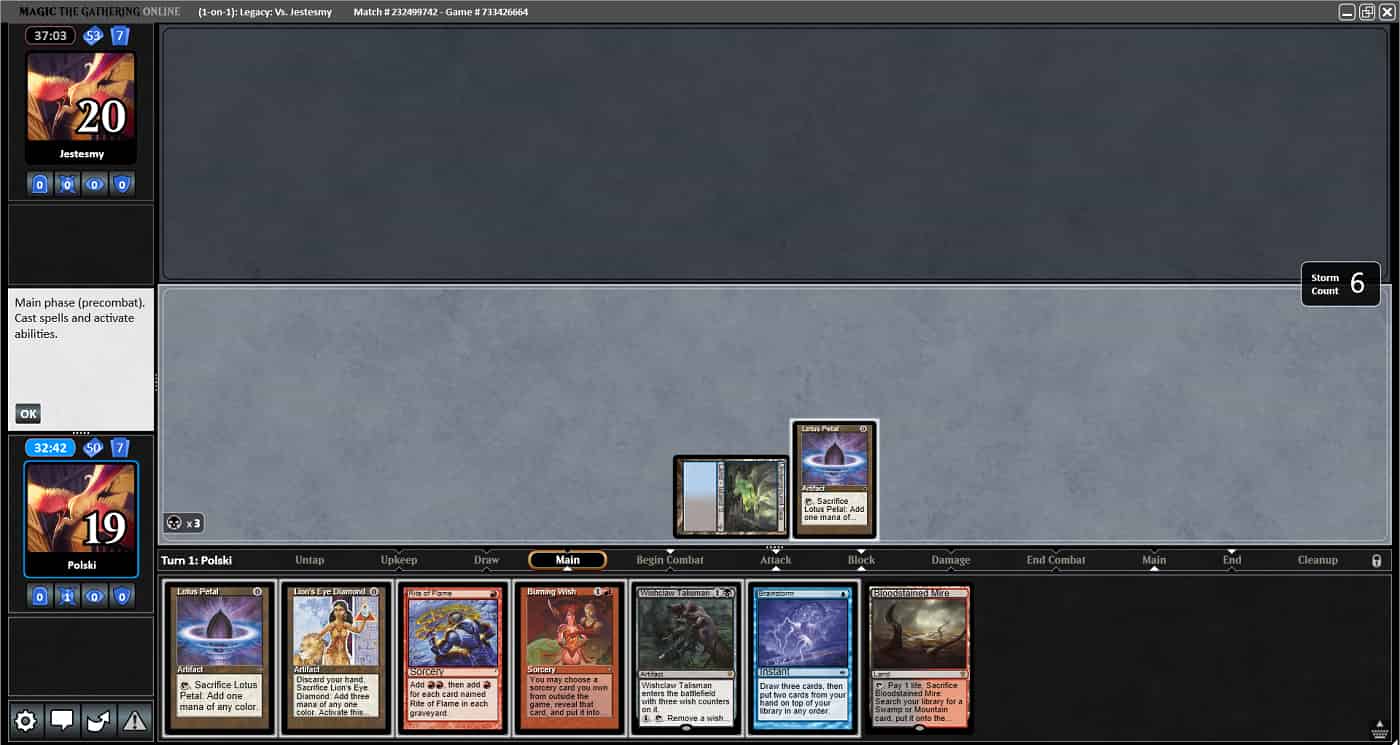 The seven cards I drew included lots of mana and a [[Burning Wish]]. That would be good enough to win the game with [[Tendrils of Agony]]. 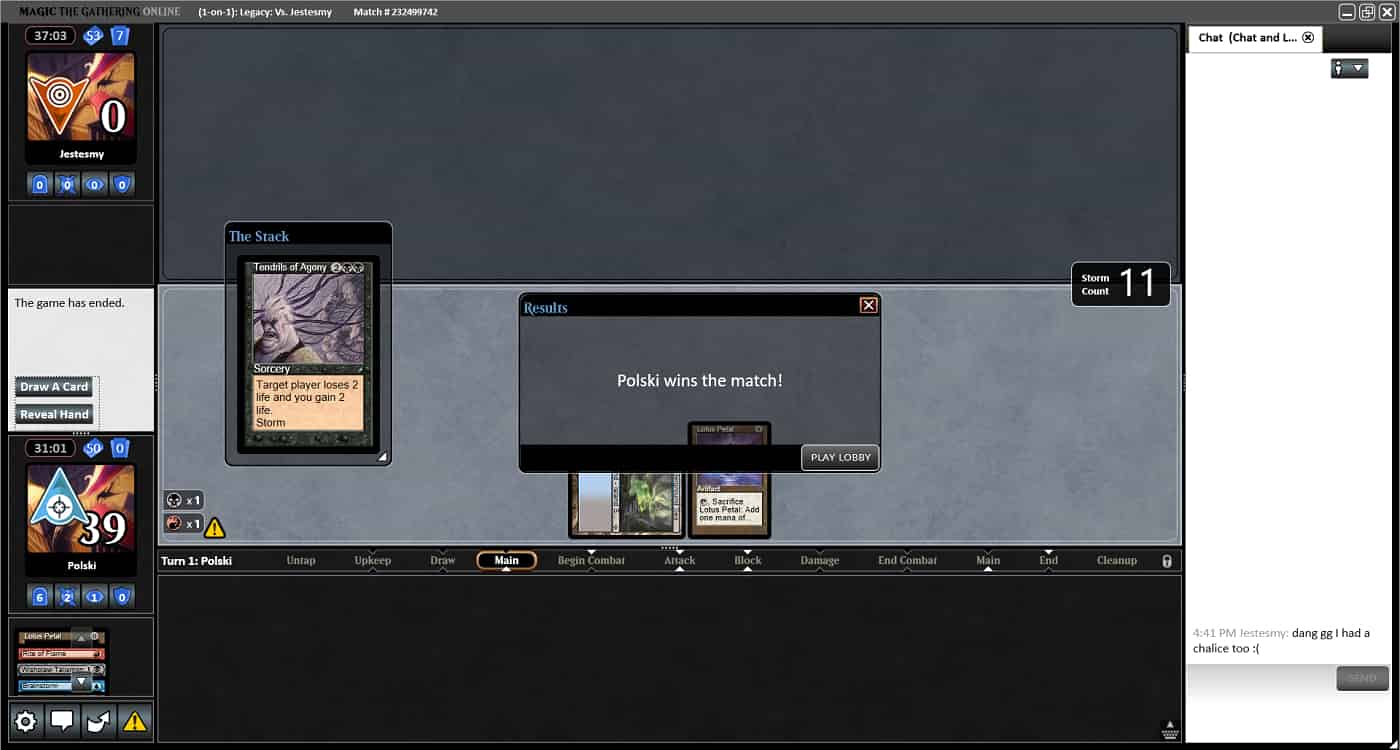 The opponent even mentioned in the chat that they had a [[Chalice of the Void]]. Good thing I won on turn one!

Goblins have been a deck in Legacy for a very long time, but with the printing of [[Muxus, Goblin Grandee]], Goblins received another great tool that adds card advantage and aggressive draws when put into play early. As cards keep getting printed to create new Legacy decks or to improve existing ones, we will continue to see the Legacy metagame evolve. It’s important we keep practicing and understanding our matchups inside and out. I hope you enjoyed this article, and I wish you the best of luck in your own testing!