Jeskai Breach is the newest deck to join the Legacy scene due to the printing of Underworld Breach. The goal is to use blue draw spells and Enlightened Tutor to assemble a combo. The deck casts Underworld Breach with a few cards in the graveyard, then use Lion’s Eye Diamond to cast Brain Freeze from the graveyard. The first Brain Freeze will put about 9-12 cards into the graveyard. Three of them can be used to “Escape” and cast the Lion’s Eye Diamond from the graveyard. The mana lets you “Escape” Brain Freeze, this time for 15-18 cards. By the third time you do the loop, you’ll have no cards left in your library and all you need to do is “Escape” your one copy of Thassa’s Oracle to win the game. There have been many variations of this Breach deck, but as people figure the deck out and the decklist becomes more tuned, it seems to be settling on Jeskai. I don’t think this deck is just a hot fad and it will be around for some time. In order to do well in Legacy today, we must have a game plan for Jeskai Breach.

How does Jeskai Breach matchup against TES?

Underworld Breach, Lion’s Eye Diamond, Grinding Station, Brain Freeze, Thassa’s Oracle – These are the cards that make up the combo. In the previous section, I explained how they all interact. This deck is very consistent, and since the pieces can be found through milling yourself and then recasting cards from the graveyard, it means this Jeskai Breach can go off with very little resources, unlike a traditional Storm deck.

Silence, Force of Will, Pact of Negation – This suite of cards is what protects the combo and also disrupts the opponent long enough to assemble the combo. Jeskai Breach is fast compared to most other Legacy decks. That’s why this package has Silence and Pact of Negation because they will mostly be cast on their turn while they’re trying to combo off. Both Silence and Force of Will are great at preventing us from comboing off.  If we go all-in on some Storm path just to be hit with a Silence halfway through, it is devastating. That’s probably even worse than a Force of Will because we have some lines that are fine with getting something countered.

Enlightened Tutor, Engineered Explosives – Jeskai Breach having access to a tutor that can search for any piece of the combo for just one mana is really good. This is the glue that puts it all together and allows Jeskai Breach to be so consistent. Enlightened Tutor basically counts as more copies of each of the combo and finds the missing pieces. It can also find utility cards such as like Engineered Explosives, for permanents. This might not sound that relevant for us, but it means Empty the Warrens is off the table.

The way we approach this matchup is similar to other blue-based combo decks such as like Show and Tell. There is a balance between having to combo off before they do, but also not playing reckless and just running into counterspells, or Silence effects. Thankfully, we do have extra tools like Veil of Summer and Tormod’s Crypt to help protect us from counterspells, but also to delay them from comboing. The key turns of this matchup are 3-4. This is usually about the time that both players have their combo assembled and are able to beat some type of interaction. TES is a faster deck, but due to the numerous counterspells, we have to slow down a bit to make sure we can beat them.

The three copies of Tormod’s Crypt is an easy one, but it’s important to understand the role that it plays. Tormod’s Crypt isn’t supposed to be a hard lock or to make the game unwinnable for the opponent. It will act as merely a delay. Jeskai Breach can easily find an answer or multiple combo pieces to go off again after the Tormod’s Crypt is used. Because of this, we can’t keep a poor hand with a Tormod’s Crypt and rely on that to be good enough. Rite of Flame is one of our weaker rituals in this version of the deck, so it’s a card I often sideboard out when there’s no clear bad card. Chain of Vapor is also quite poor. The opponent won’t have any form of permanent hate, and bouncing their combo pieces just isn’t effective.

For this article, I decided to mix it up a little bit. Instead of demonstrating a full match, I decided to show a couple of different scenarios throughout multiple matches. There really isn’t much of a “boardstate” developed with two combo decks, so I wanted to focus on some crucial decisions across a few different games.

On the surface, this may seem like an easy keep. The hand has plenty of lands, all four colors, rituals, protection, and a win condition. What’s not to like? The problem is that it’s very slow. The best-case scenario is turn-two Defense Grid into turn-three or turn-four Ad Nauseam with some help. There’s a good chance the opponent could just combo off before me or find multiple counterspells by then. I tend to be on the safer side of things, so I kept the hand and hoped the top of my deck allowed for some speed.

Game One on the Play 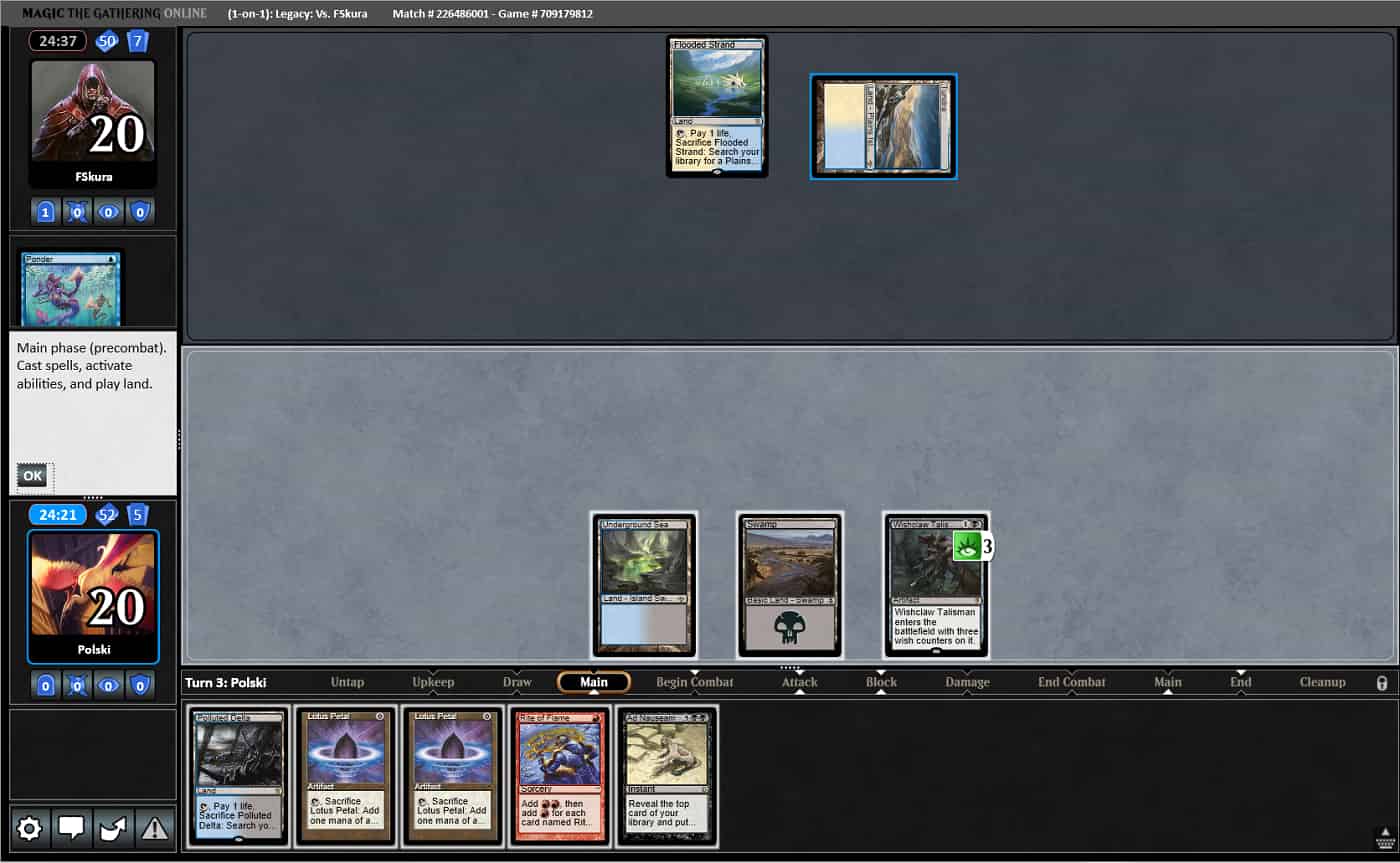 This is a scenario where I had six mana, enough for the Ad Nauseam, but there’s a good chance my opponent has a counterspell. Six is one shy of activating Wishclaw Talisman for Veil of Summer, casting it, and then Ad Nauseam. Activating Wishclaw Talisman here and just passing the turn probably means they’re going to combo on their turn, so my choices were do nothing and pass the turn, and hope I don’t die on their turn, or cast Ad Nauseam and hope they don’t have a counterspell. If I didn’t have this Wishclaw Talisman, I would have just gone for it here because waiting another turn may not have helped anyway. Since I have the card, I opted to wait a turn to have access to Veil of Summer. I thought the odds were low that they would kill me on their turn and that they’re holding counterspells because they didn’t do much the first two turns.

This is another closer hand because it has lots of fast mana, a disruptive Chain of Vapor, and we are on the draw to fill in the missing pieces. The problem with this hand is that it’s just a little short on several things. No cantrips, win conditions, or protection. This hand just needs too many things to go right in order to win this game. It’s very possible the top card of the deck is Ad Nauseam and they don’t have any counterspells, but that’s unlikely. If one of these Chrome Mox were a cantrip, I would keep immediately. With this hand, I think I would rather have a random six then relying on the top of my deck. 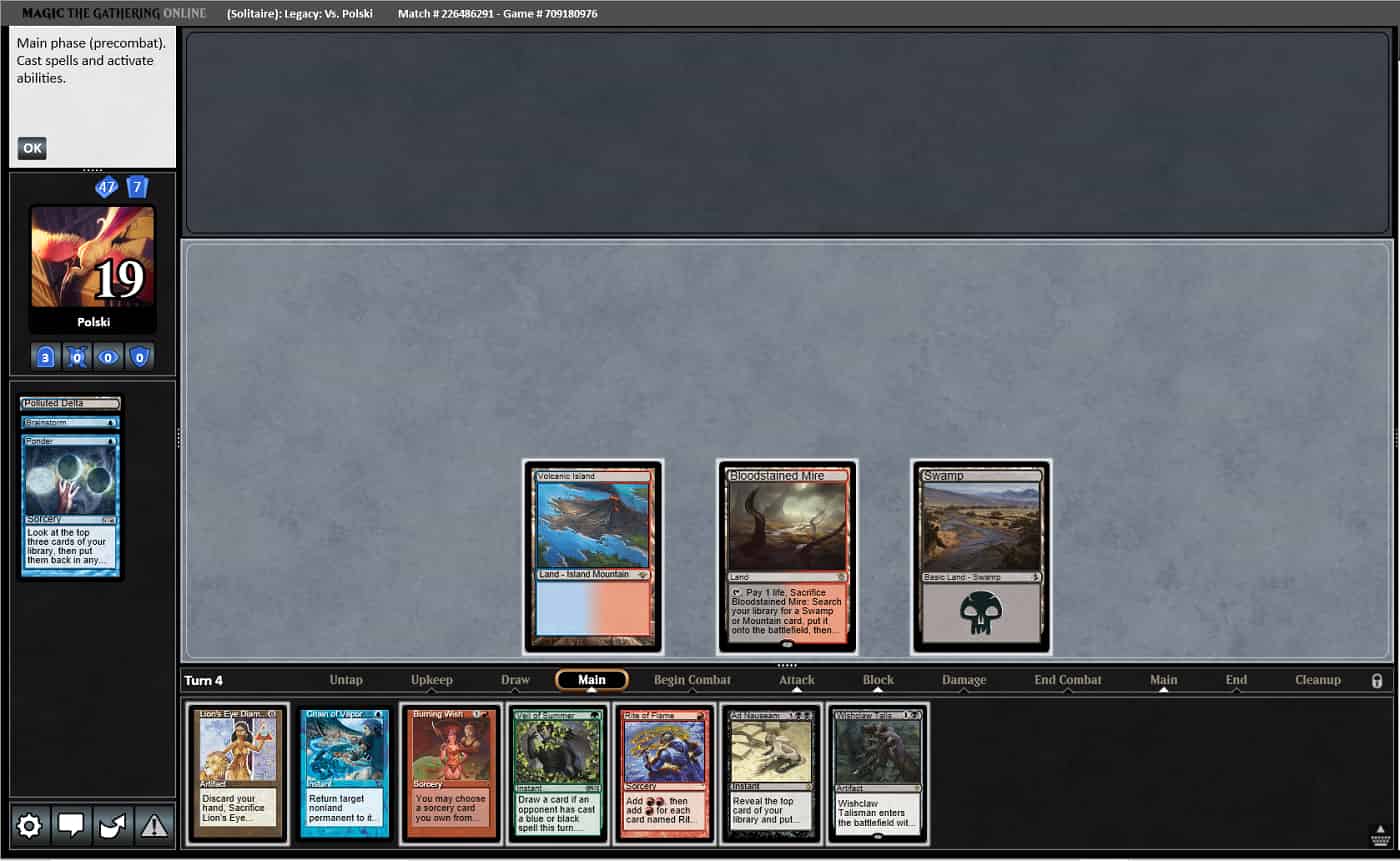 Game one, on the draw, turn three, and the opponent has three untapped lands and hasn’t cast a spell this game. I’ve been sculpting my hand building up to this point in the game with cantrips. This scenario has so many options. My opponent is probably loaded with counter magic and building up a hand for their own combo. I started off tapping the two lands and casting Wishclaw Talisman leaving Bloodstained Mire up. I wouldn’t use Veil of Summer to protect it from a counterspell. I would want to save it for the turn I combo off, and I wouldn’t have enough mana to do that this turn if I used all of my lands. My hope would be to cast Veil of Summer on the following turn and try to Burning Wish for Echo of Eons and flash it back off the Lion’s Eye Diamond mana. If the opponent tried to combo off on their next turn, I could use this Chain of Vapor at a key point to delay them. I think there’s several different routes this hand can take, so I’d be curious what your take would be.

It’s always great to see brand new Legacy decks show up into the meta and make such a big impact. Just in the past couple of months, two new standard cards would shake up Legacy. I think Jeskai Breah will be around for a while because the deck is already putting up great results. I also think the current decklist isn’t what it will end up being. As people play it more and figure it out, it will mold into an even better version. Whether you decide to play Jeskai Breach or plan to beat it, it is a deck that you need to be familiar with, so I wish you the best of luck in your own testing!