Jeskai Control plays all of the typical control cards in counterspells, card draw, planeswalkers, and removal spells. The deck, which ultimately wins the game with [[Monastery Mentor]], has become the main control deck of the format since the printing of [[Expressive Iteration]] and [[Prismatic Ending]]. These new cards give Jeskai the tools it needs to be the best, and most played control deck in the format. This means we, and every other Legacy player, should have a plan against Jeskai Control.

How does Jeskai Control matchup against TES?

[[Prismatic Ending]] – In previous iterations of Jeskai Control, they didn’t have good answers to remove non-creature permanents. [[Prismatic Ending]] changes that, and even more so when playing three colors. This is problematic for TES if we are playing out artifacts before the combo turn. That is something new to this matchup that we didn’t have to worry about before.

Against most blue control decks, [[Galvanic Relay]] is going to be our best card. With four copies of [[Burning Wish]], one [[Galvanic Relay]] in the maindeck, and bringing in two more copies in during post-board games, there is a good chance we will have access to it. This matchup plays slower and can take several more turns than our average match. We don’t want to play too aggressively into the many free counterspells the opponent has, and they don’t put on much of a clock, so there is no reason to hurry. Most of the opponent’s counters are card disadvantage, so having a card like [[Galvanic Relay]] Our best chance of winning is to try and combo slower with [[Galvanic Relay]] or assembling [[Defense Grid]] or [[Veil of Summer]] for protection. [[Defense Grid]] is the least reliable because of [[Teferi, Time Reveler]] being able to return it to our hand and [[Prismatic Ending]] to destroy it.

This sideboarding plan lines up with our game plan. We want the extra copies of [[Galvanic Relay]] to play through the counterspells and amass card advantage. This matchup usually plays slower and more turns, so the opponent will have several lands in play making [[Carpet of Flowers]] an excellent mana source every turn. [[Abrupt Decay]] is hit or miss for me, but there’s enough cards to take out and enough potential targets that I think it’s worth it. There can be [[Stony Silence]], [[Null Rod]], [[Narset, Parter of Veils]], [[Monastery Mentor]], and several others. [[Ponder]] and [[Echo of Eons]] are cut because the opponent is going to have many copies of [[Pyroblast]] and [[Narset, Parter of Veils]].

For the first game, I was on the draw, and my opening hand had cantrips, [[Defense Grid]], and [[Veil of Summer]], so I kept it. Neither of us did much the first couple turns as my opponent and I just played cantrips until I cast a [[Defense Grid]] on my third turn. On the opponent’s third turn, they cast a [[Prismatic Ending]] to exile the [[Defense Grid]]. On their following turn, the opponent played a [[Narset, Parter of Veils]]. On my turn, I drew a [[Burning Wish]] and [[Dark Ritual]], giving me a way to combo and a [[Veil of Summer]] for protection. I decided that was the turn I wanted to go for it. 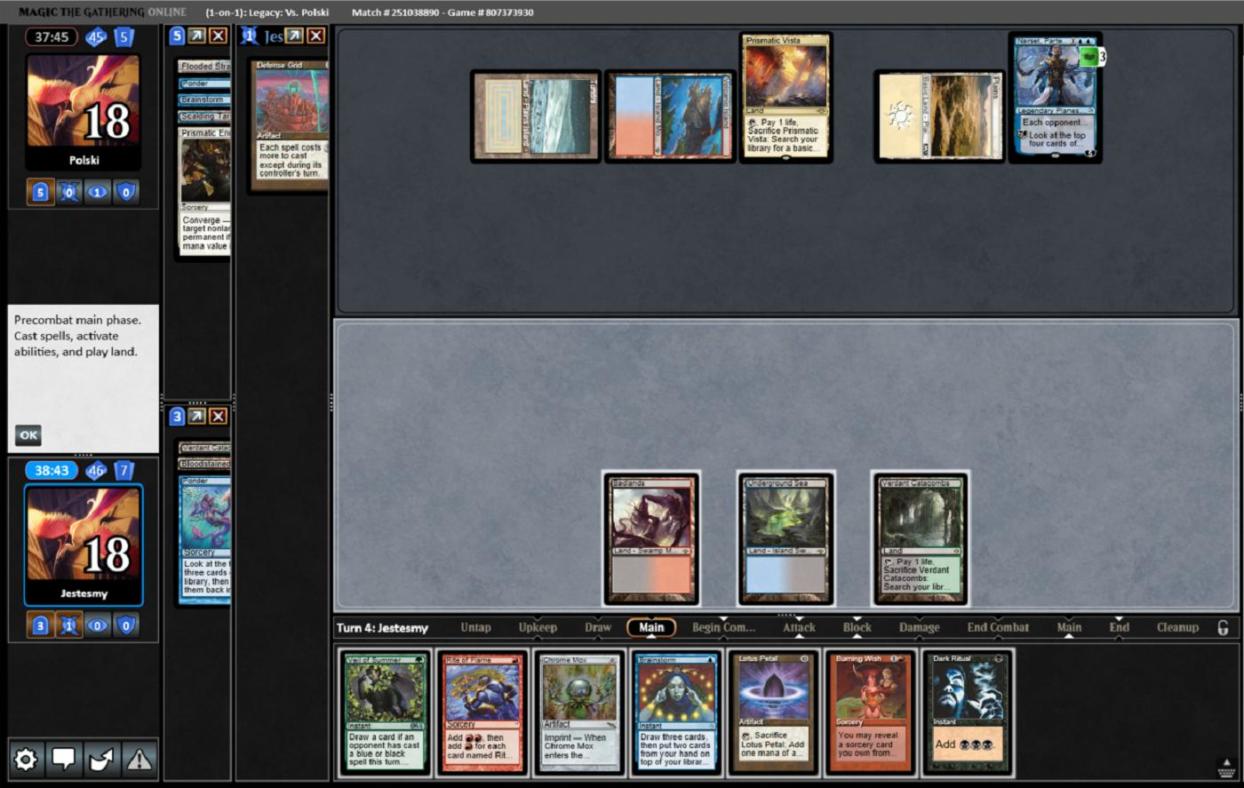 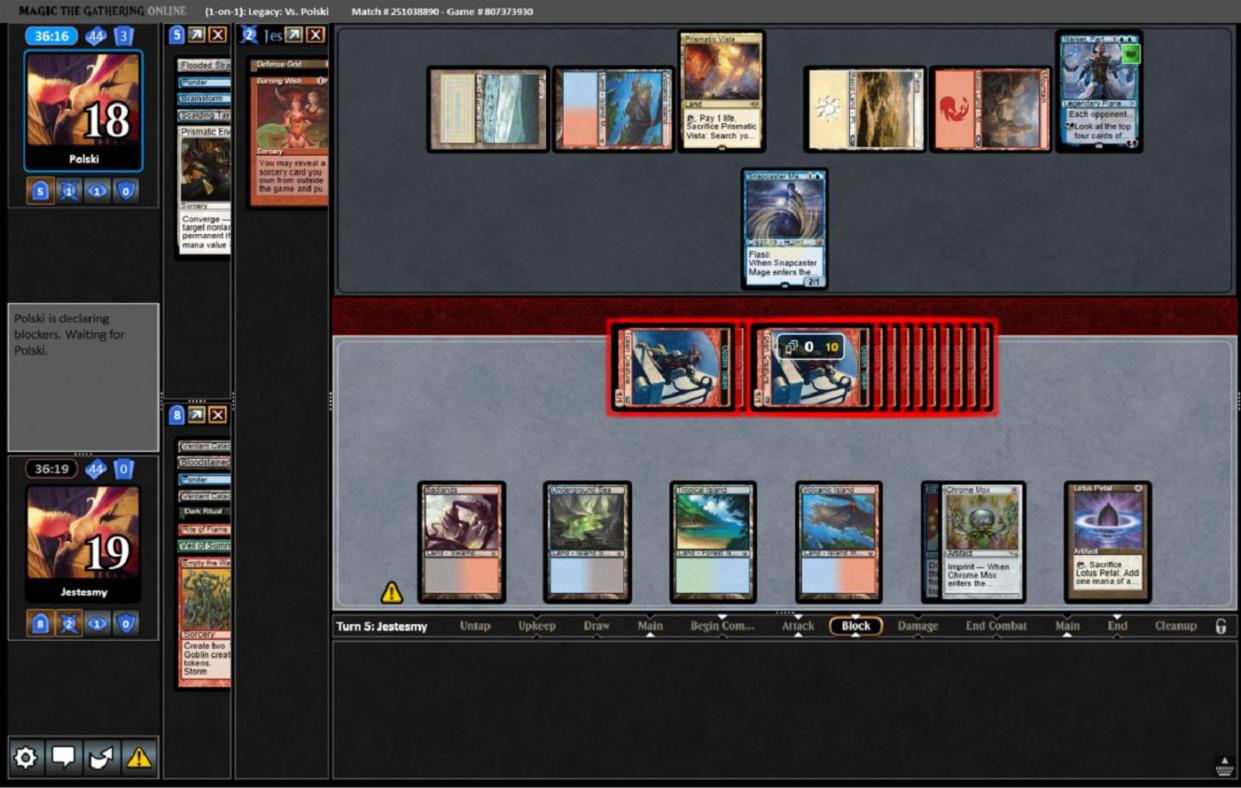 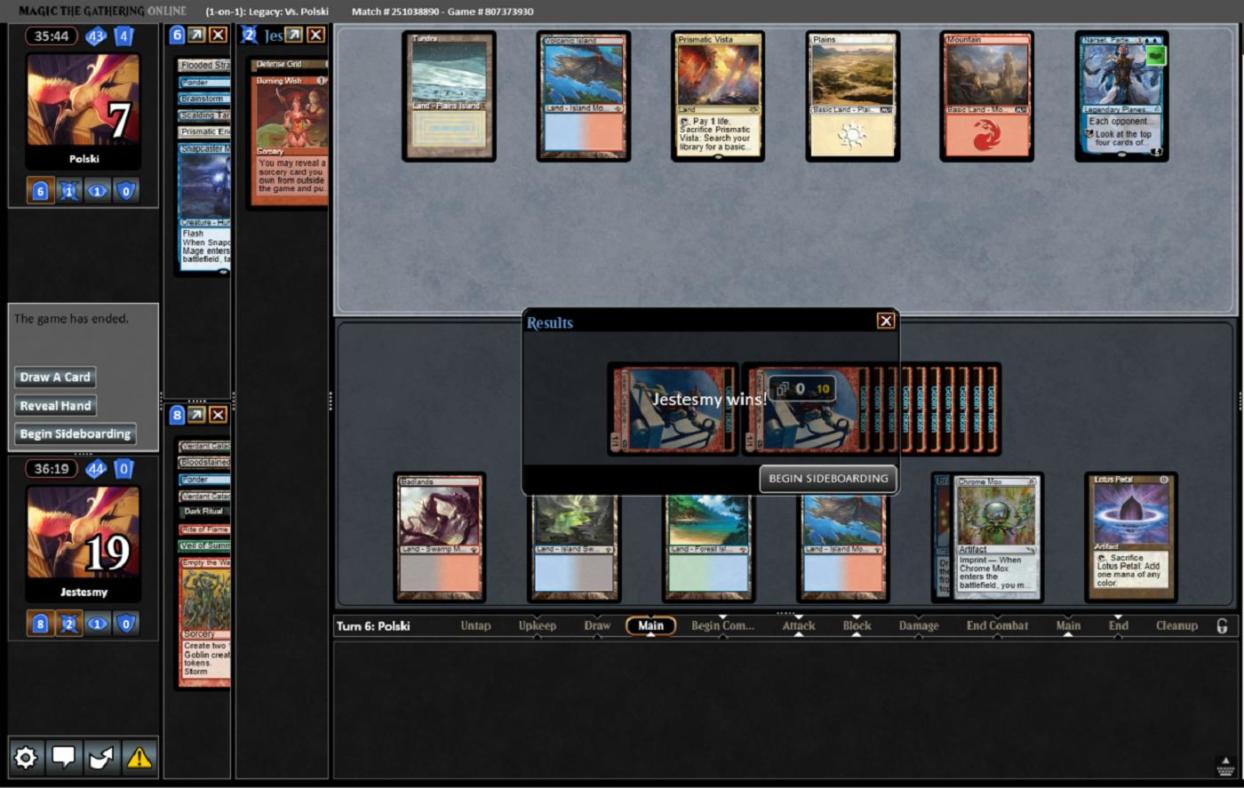 For the second game, my opening seven cards had two lands, two copies of [[Abrupt Decay]], [[Galvanic Relay]], and two copies of [[Veil of Summer]]. This was a really slow hand and too defensive for how I like to approach this matchup, so I decided to mulligan. 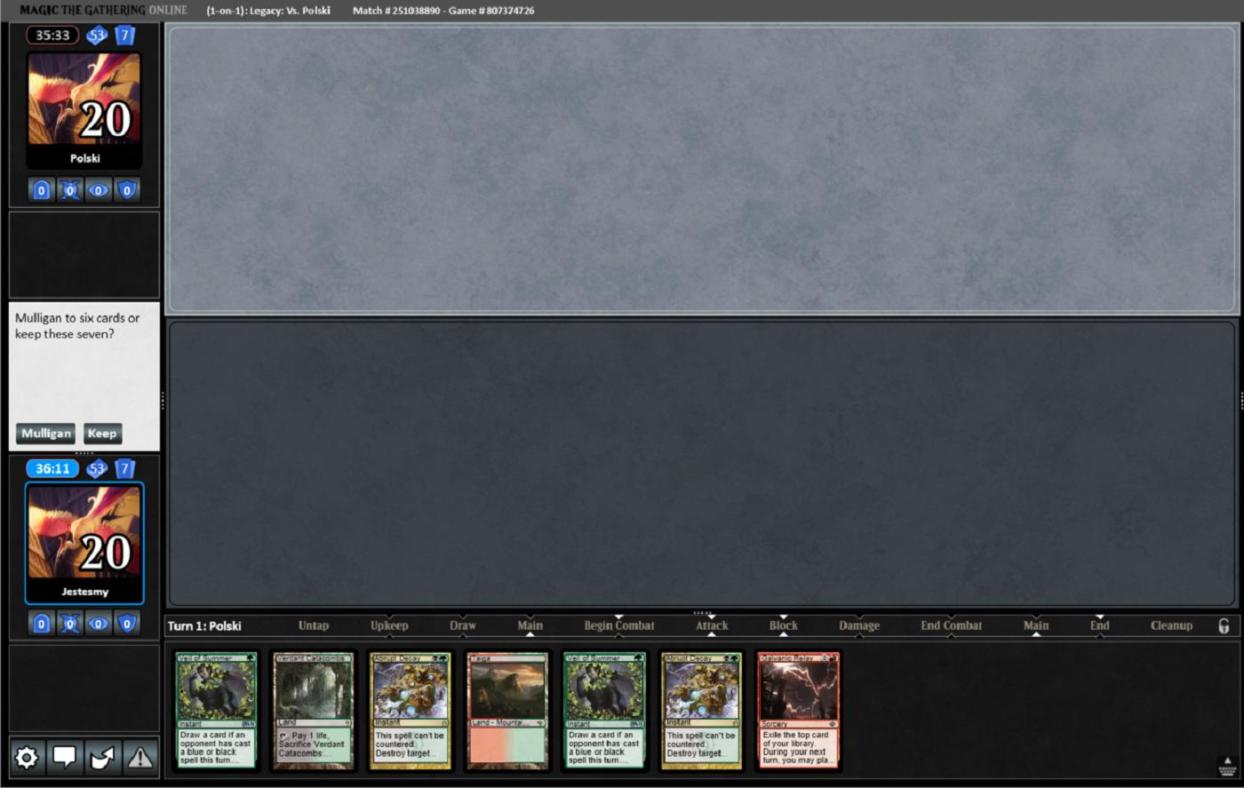 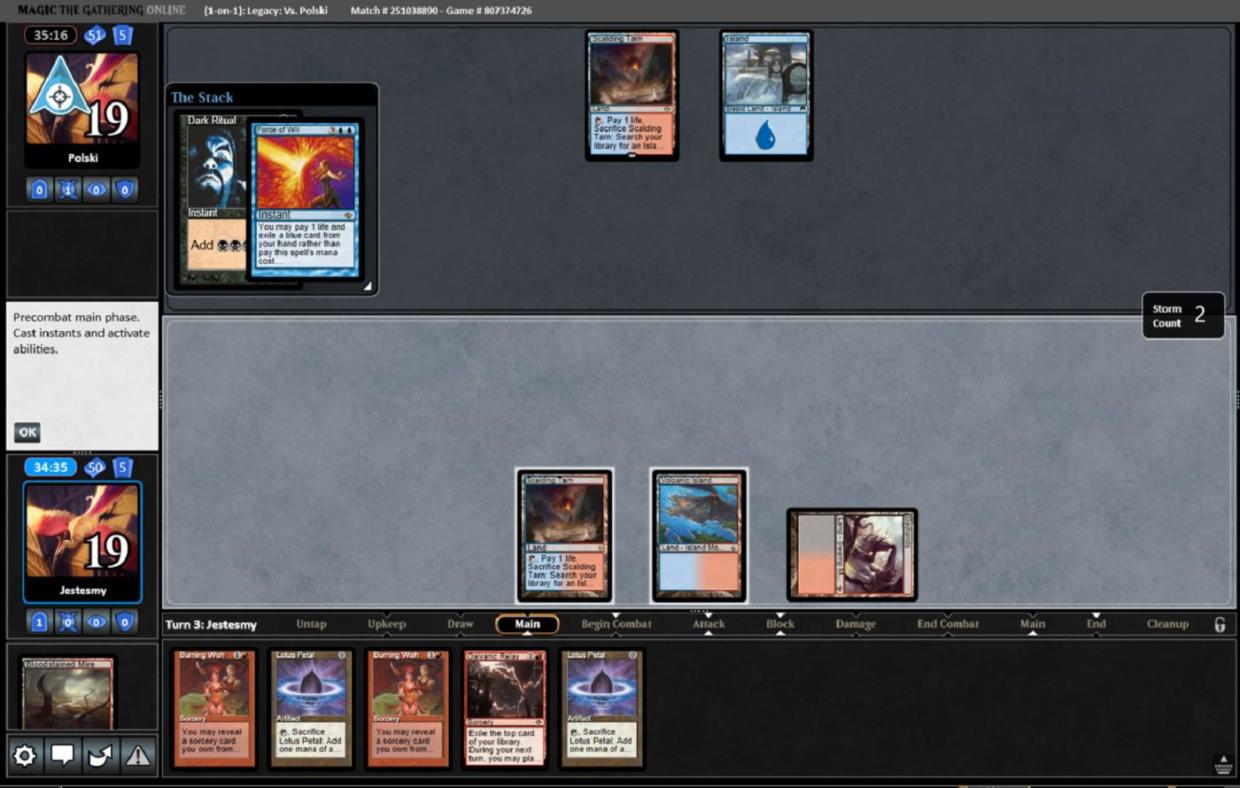 My opponent played a [[Narset, Parter of Veils]] and put a [[Force of Will]] into their hand and ended their turn. On my turn, I started casting the cards in exile from [[Galvanic Relay]]. I knew the [[Wishclaw Talisman]] would be countered by the [[Force of Will]], but I wanted to build up Storm count and force the counterspell so my [[Burning Wish]] could resolve. 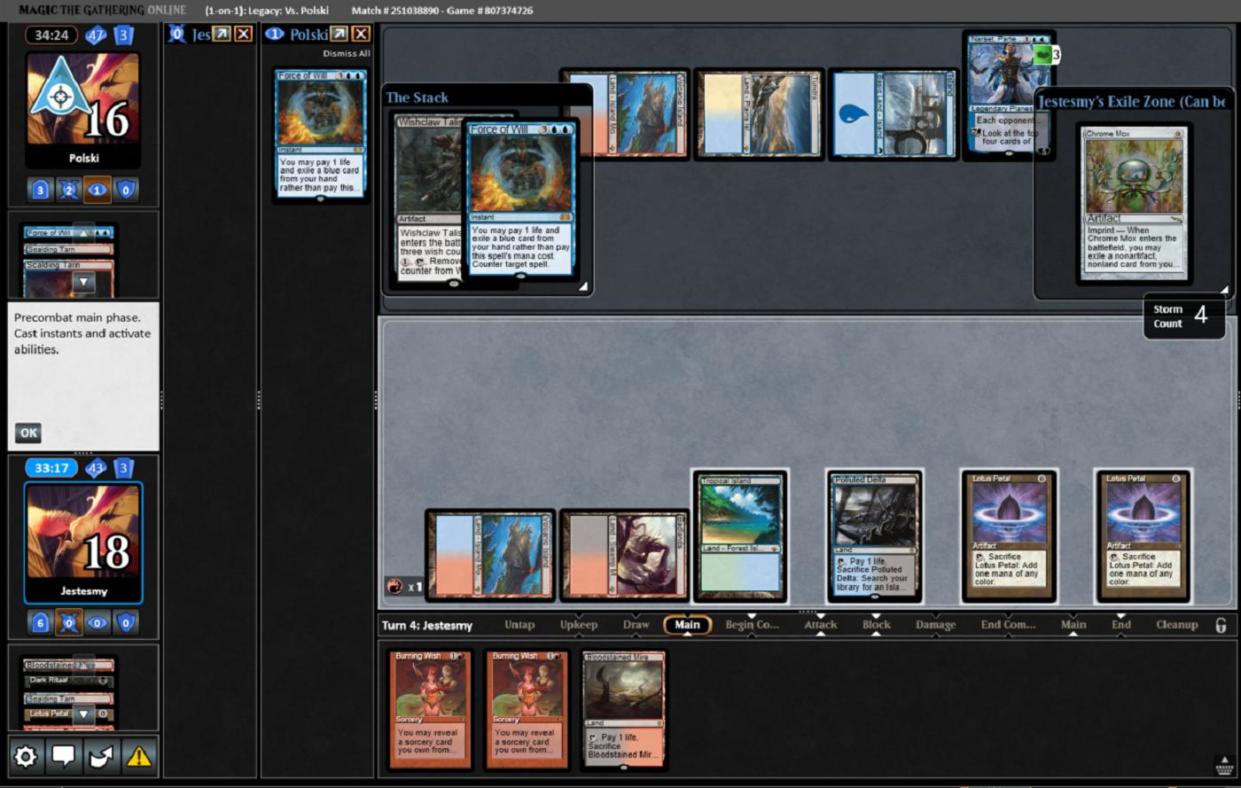 Once that happened, I was free to cast [[Burning Wish]] for another [[Galvanic Relay]] for six Storm. I exiled [[Brainstorml]], [[Chrome Mox]], land, [[Rite of Flame]] and two copies of [[Lion’s Eye Diamond]], and ended my turn. On my opponent’s next turn, they activated [[Narset, Parter of Veils]] again and put [[Red Elemental Blast]] into their hand. During my turn, I played out both copies of [[Lion’s Eye Diamond]] and then the [[Brainstorm]], which was countered. 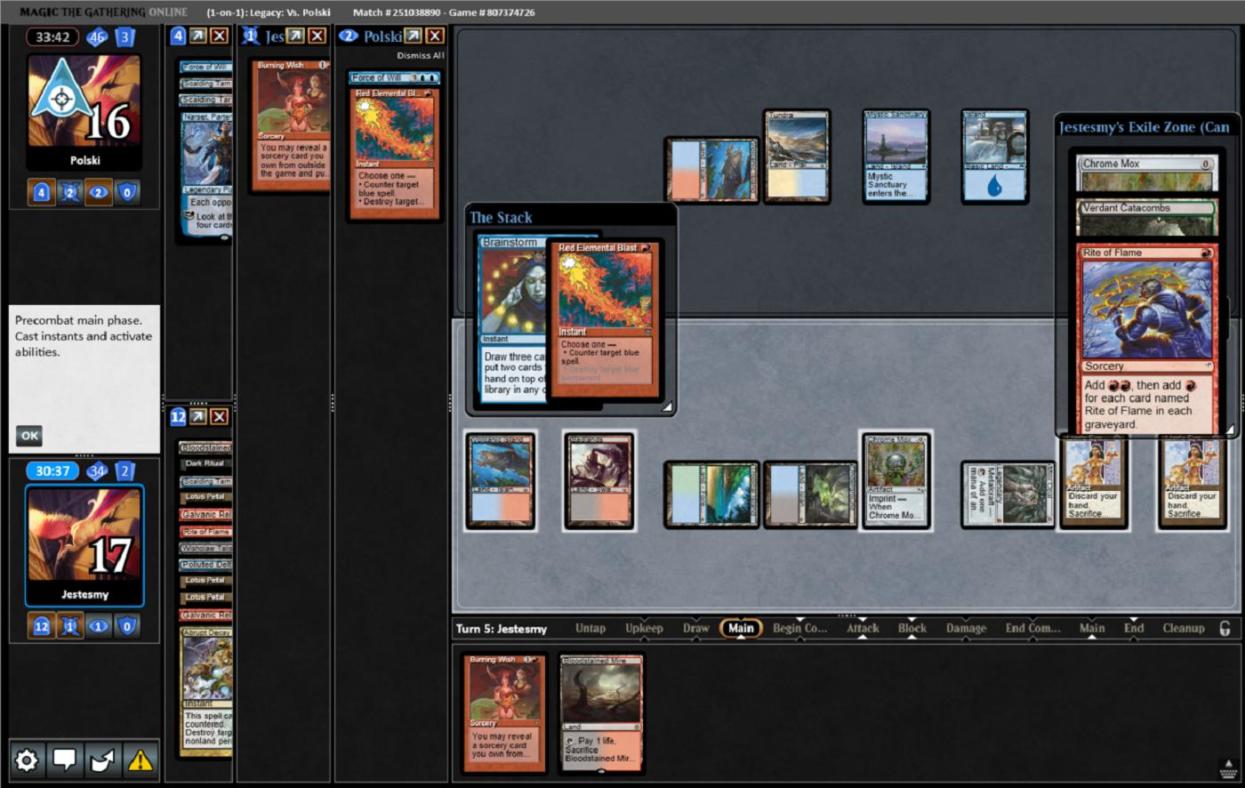 From there, I had enough Storm off the rituals and the counterspell that I could [[Burning Wish]] for [[Tendrils of Agony]] to win the game. 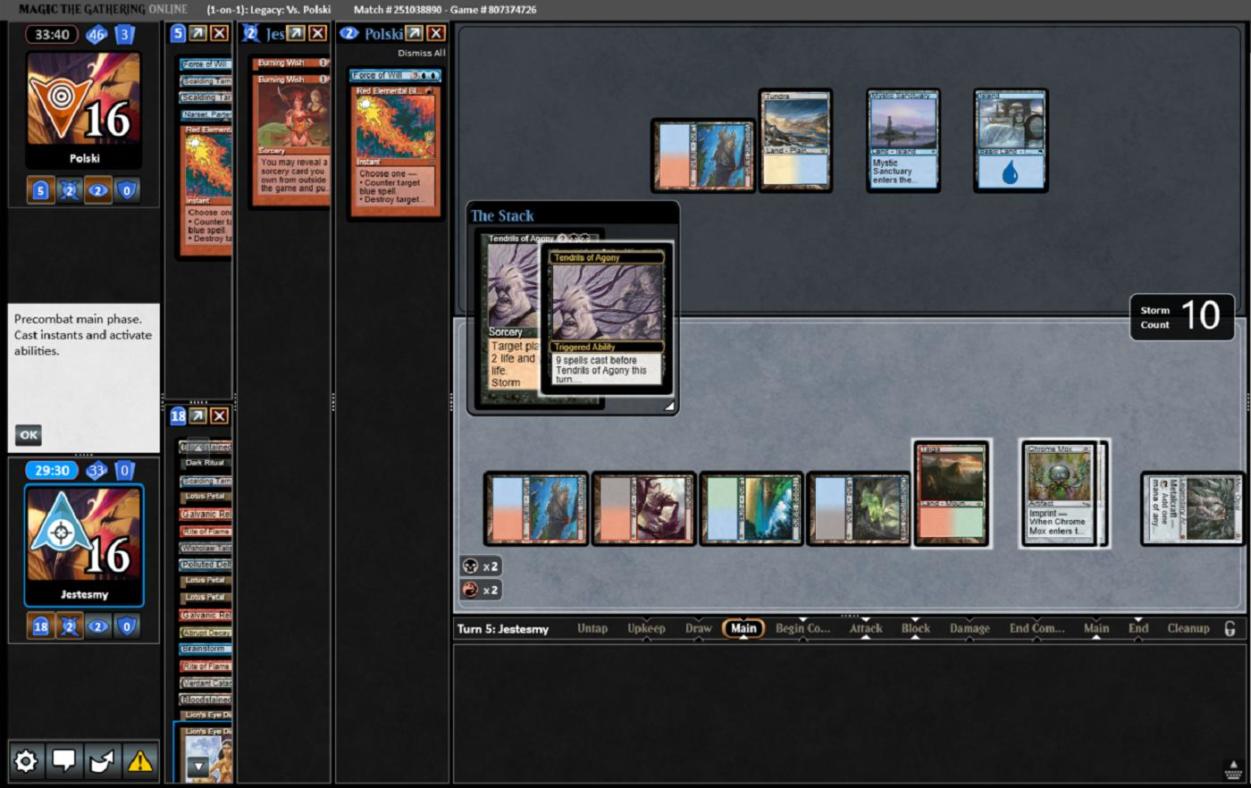 
The printing and addition of [[Galvanic Relay]] to TES has given the deck a new angle to fight against blue control decks. There has also been a decrease in number of [[Flusterstorm]] as the format moves to [[Force of Negation]]. This amplifies how great [[Galvanic Relay]] is in the current format, and we saw that in the example match. The opponent had several counterspells, and I was able to cast multiple copies of [[Galvanic Relay]] to amass card advantage and grind through them over several turns to win the game. TES being able to play three copies in the main deck and four copies of [[Burning Wish]] to tutor for the one in the sideboard in post board games is why I believe TES is favored. I hope you enjoyed this article, can take some of the lessons learned, and apply them to your own playtesting.