Madness is a deck looking to abuse the Madness mechanic, discarding cards from their hand. The goal is to try to get cards like [[Blazing Rootwalla]], [[Hollow One]], and [[Anje’s Ravager]] into play for free or cheaply. They can do this quickly by using cheap discard effects to get these creatures into play on the first two turns of a game. This makes Madness a very aggressive deck, and all of the cards in their deck are used to push this strategy, so there isn’t much interaction. Madness just tries to beat other decks by being faster than them. It’s a really interesting deck that we may see pickup in popularity so TES pilots should be prepared.

How does Madness matchup against TES?

[[Basking Rootwalla]], [[Blazing Rootwalla]], [[Anje’s Ravager]] – These are the creatures that have the Madness ability that the deck is trying to put into play. While these creatures may not seem to be good enough for Legacy, the fact they can be zero mana and card advantage off of a [[Faithless Looting]] or [[Burning Inquiry]] definitely make it worth trying.

[[Vengevine]], [[Hollow One]], [[Anger]] – To give Madness an extra push they play cards like [[Hollow One]] and [[Vengevine]] to accompany the Madness creatures as they discard and cast multiple creatures. [[Anger]] is a really unique card to make Madness a much faster deck by giving all the creatures haste, and that’s important in Legacy. Their entire deck’s premise is to try and race and be faster than the opponent and [[Anger]] is critical to doing that.

This matchup is all about the speed at which each player goldfishes. Madness is not going to have any interaction. TES doesn’t have much either, so it’s just about who can win the fastest. This favors TES in the matchup because it is usually the faster deck. We have the capability of winning on the first or second turn. Madness does not have that type of draw, but they can be quite fast. Especially with the combination of [[Anger]] giving everything haste. We need to take this into account when evaluating opening hands. The strength of our hand is determined by how quickly we can combo off.

The opponent is going to have zero or minimal interaction. Their game plan is just to be faster and to try to win before we can combo off. In order to prepare for that game plan we need to try and do the same and just be faster. This requires taking out our protection, that does very little anyway, in [[Veil of Summer]]. Bringing in [[Galvanic Relay]] and [[Aeve, Progenitor Ooze]] increases our chances of having a faster opening hand. An opening hand that can [[Galvanic Relay]] on turn one or two and win on the following turn will certainly be fast enough to race Madness. [[Abrupt Decay]] isn’t at its best in this matchup, but being able to destroy a random early creature could slow the opponent down and give us an extra turn.

We started the match with me being on the play. I looked at my opening hand and it was pretty good. It had the ability to turn-one flashback an [[Echo of Eons]] without using a land. This doesn’t generate a ton of value since I’d be trading six cards for seven, and just keeping the land I played for my turn, and my opponent just getting a new seven cards, but I decided to keep and go with that line. I chose not to play out the two copies of [[Chrome Mox]] for Storm or for Metalcraft because I wanted a higher chance of drawing them in my new seven cards. 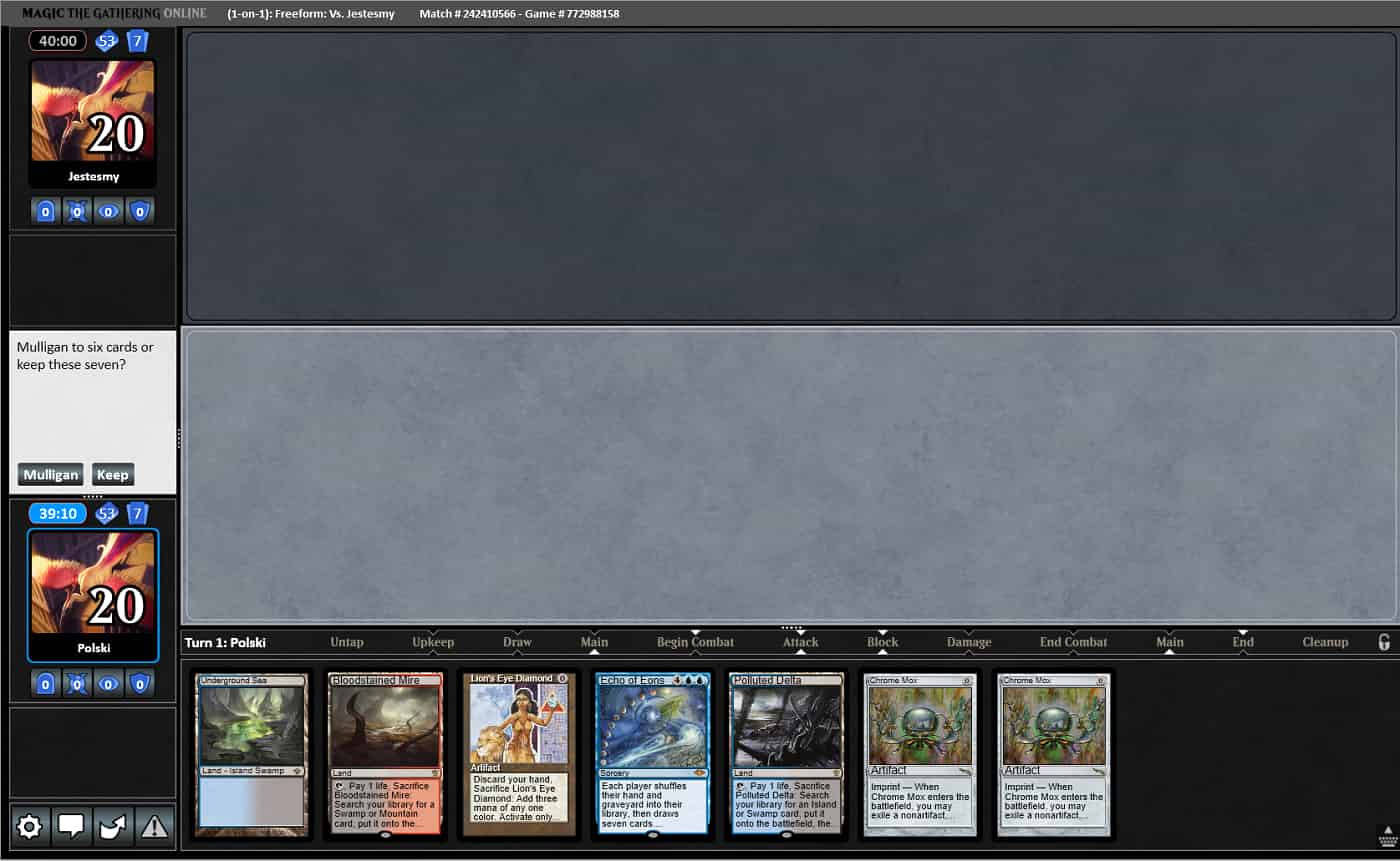 The seven cards I drew were perfect. It had lots of mana with two copies of [[Rite of Flame]], [[Lotus Petal]], and [[Lion’s Eye Diamond]] along with a [[Burning Wish]] and [[Wishclaw Talisman]]. Unfortunately, this wouldn’t be enough Storm to [[Burning Wish]] for [[Tendrils of Agony]], so I chose to go for [[Ad Nauseam]] with [[Wishclaw Talisman]]. 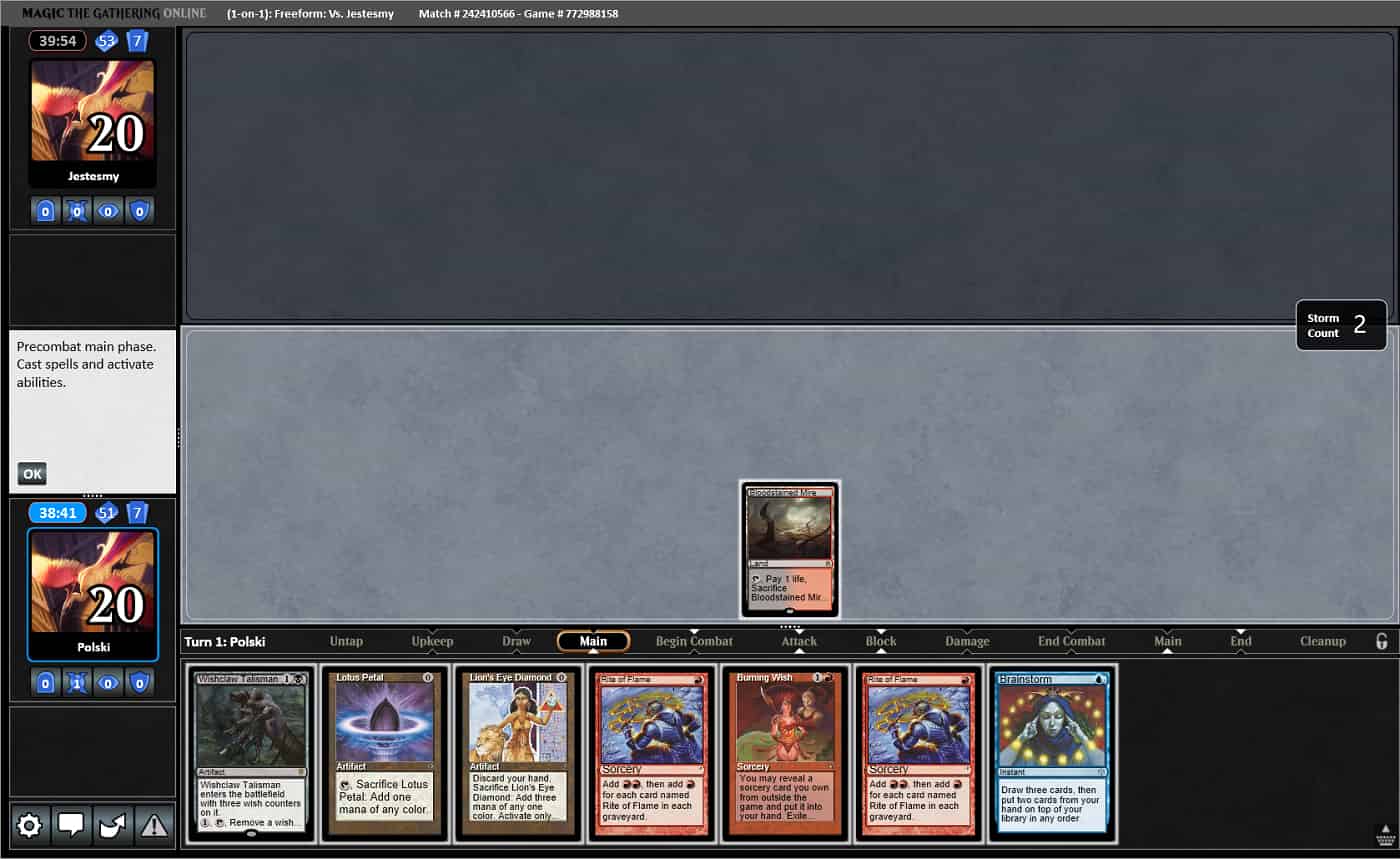 When [[Ad Nauseam]] is cast from a high life total, there’s a good chance it’ll draw enough cards in order to win the game. This time was no exception. I drew lots of free mana, rituals, and a [[Burning Wish]] to [[Tendrils of Agony]] for more than 20 damage. 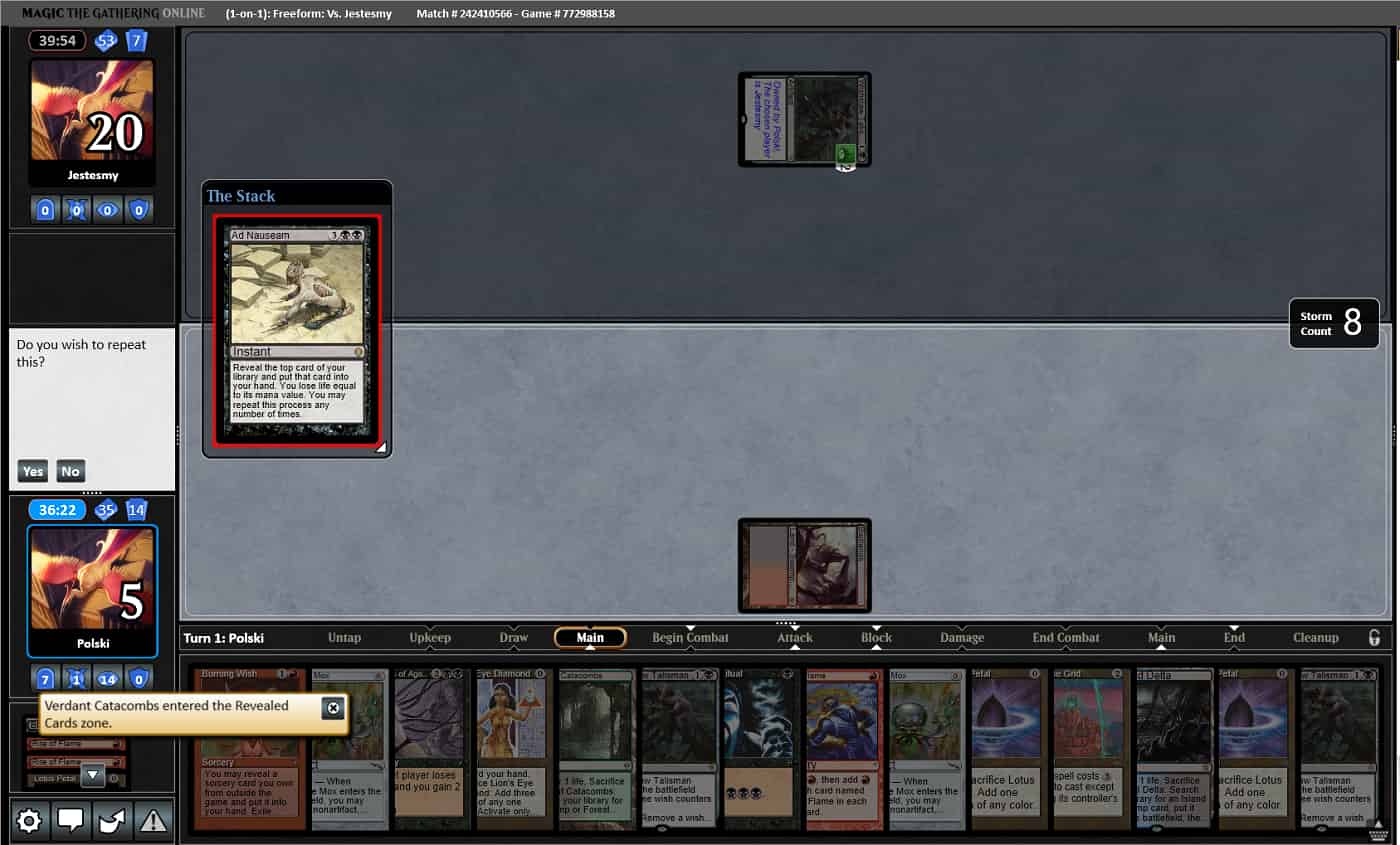 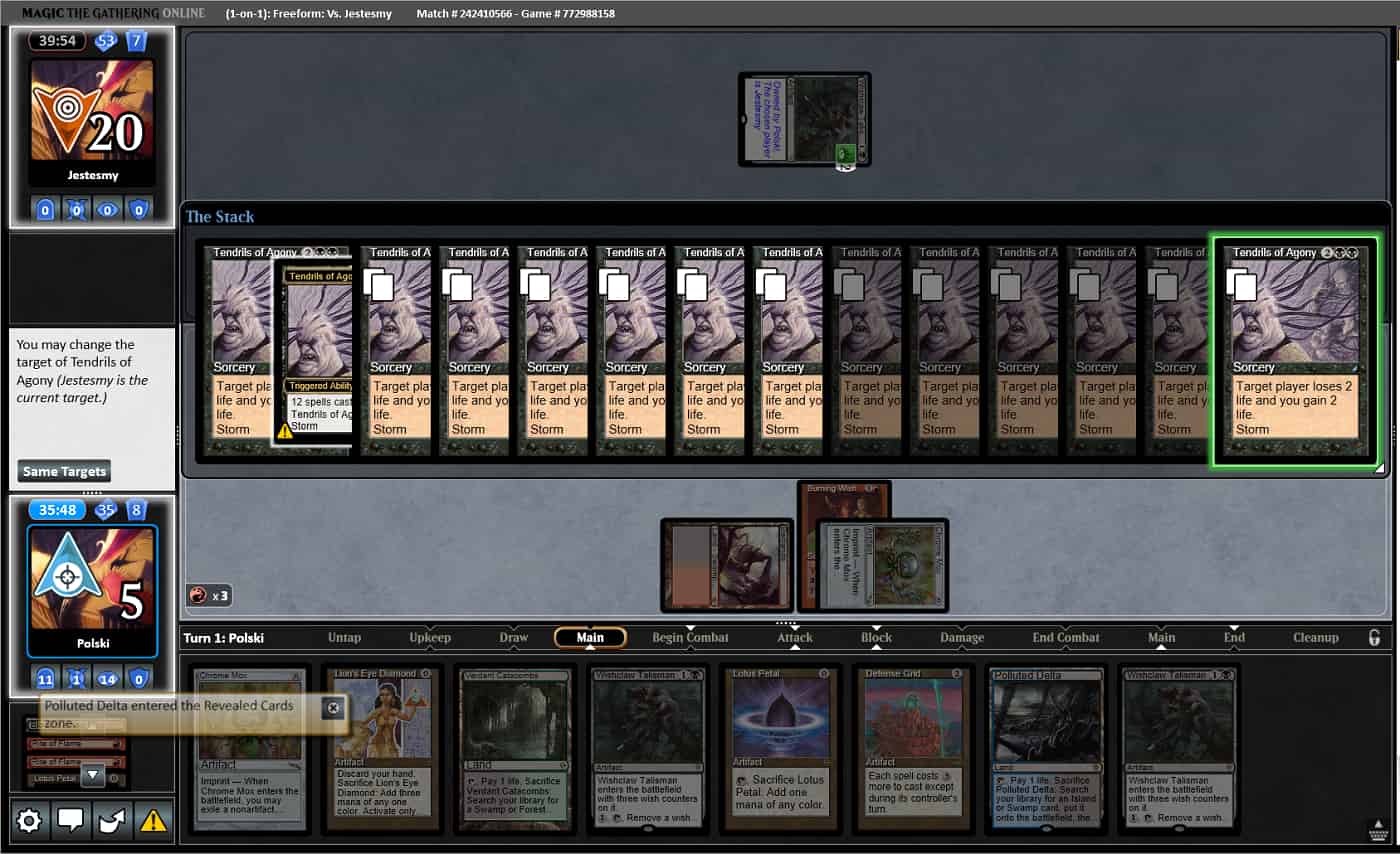 This game TES just had one of those hands that you can’t beat unless you have some free counterspells. It’s one of the big advantages of playing TES is you just get some free wins against some decks.

We went to our sideboard, and I sideboarded how I recommended in the above section. For the second game, I was on the draw and had a slower hand. Not necessarily the best in this matchup, but with the combination of [[Brainstorm]], [[Ponder]], potential [[Burning Inquiry]], and getting a draw step I thought I could get some new cards to help speed the hand up. The hand had potential to be fast, so I decided to keep. 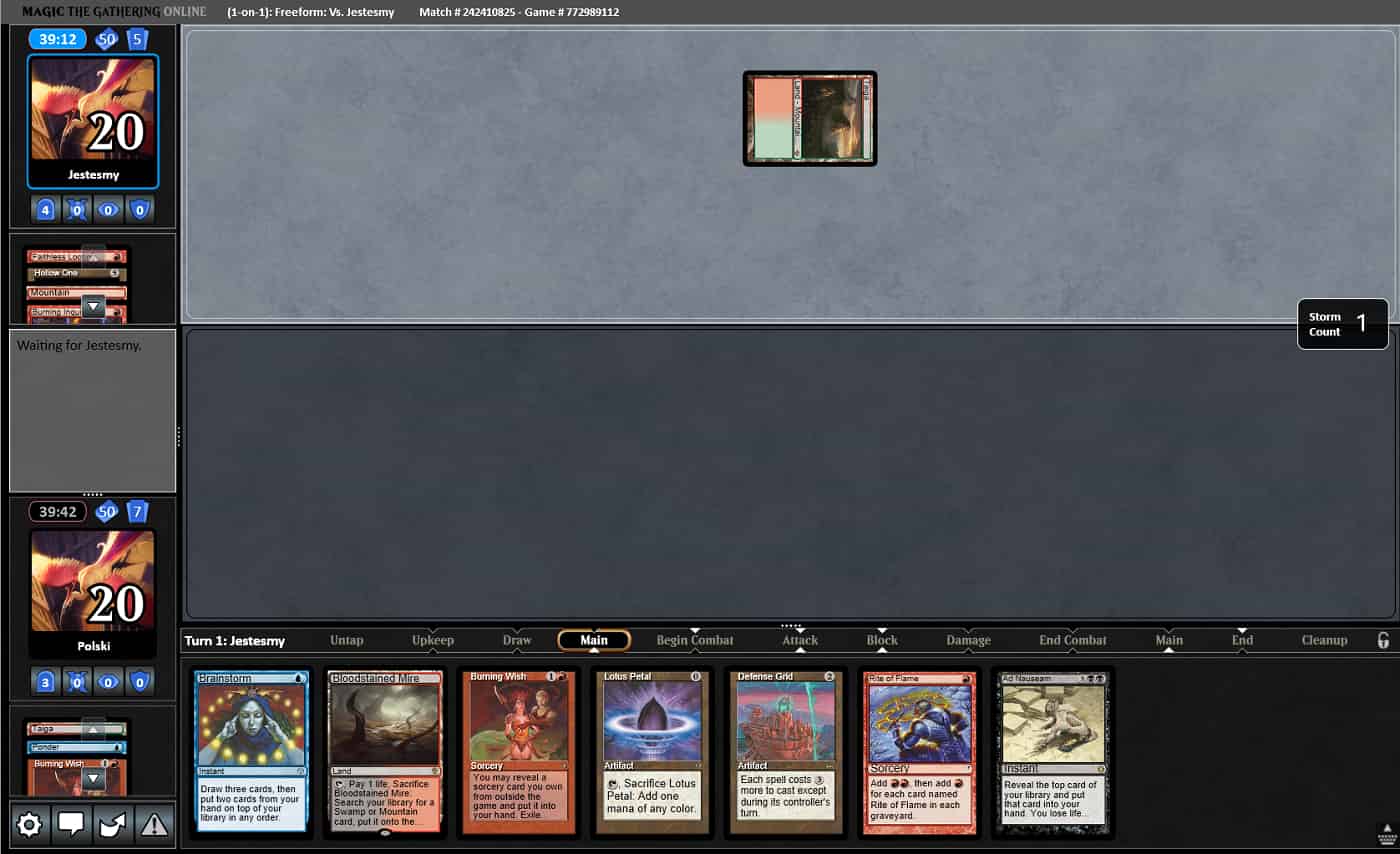 On my first turn, I drew a [[Ponder]] and immediately cast it to look for any way to combo off on my next turn. I saw an [[Echo of Eons]] and [[Lion’s Eye Diamond]] and another [[Brainstorm]]. I kept them all on top, and my plan was to use the [[Lion’s Eye Diamond]] with the [[Echo of Eons]] to get seven cards with mana floating to use after on turn two. My opponent messed up that plan when they spent their second turn casting two more copies of [[Burning Inquiry]]. That resulted in a [[Basking Rootwalla]] in play and my [[Lion’s Eye Diamond]] in the graveyard. I had a [[Burning Wish]], [[Ad Nauseam]], [[Echo of Eons]], two copies of [[Rite of Flame]], and a [[Lotus Petal]] to work with, but that wasn’t good enough to really go anywhere. I took my draw step and it was a [[Dark Ritual]]! That was just the right card in order to cast [[Ad Nauseam]]. 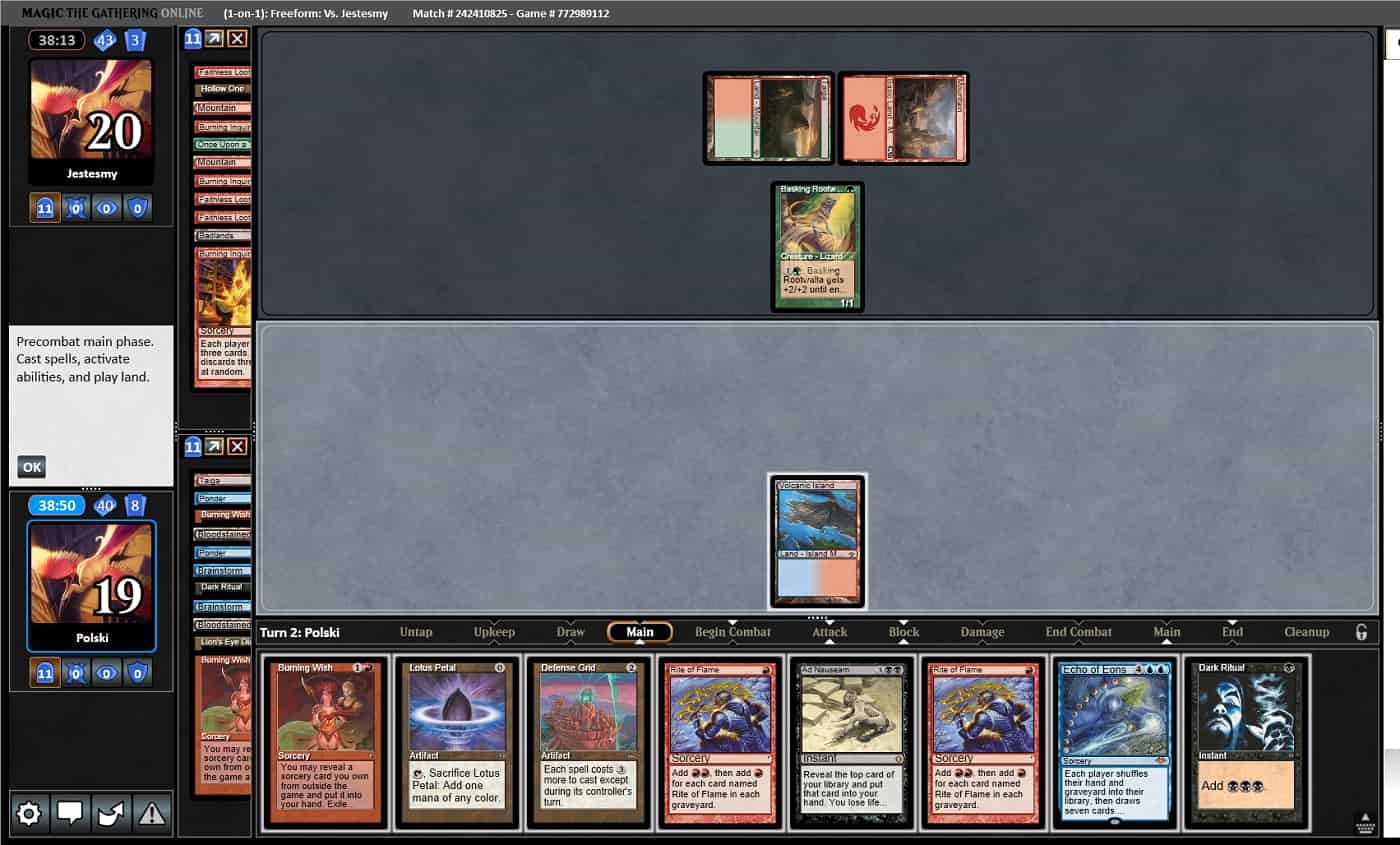 I used the [[Lotus Petal]] for [[Dark Ritual]] and my [[Volcanic Island]] to cast both copies of [[Rite of Flame]] and that was enough mana for [[Ad Nauseam]]. Just like in game one, an [[Ad Nauseam]] from a high life total was good enough to find a [[Tendrils of Agony]] and plenty of storm. 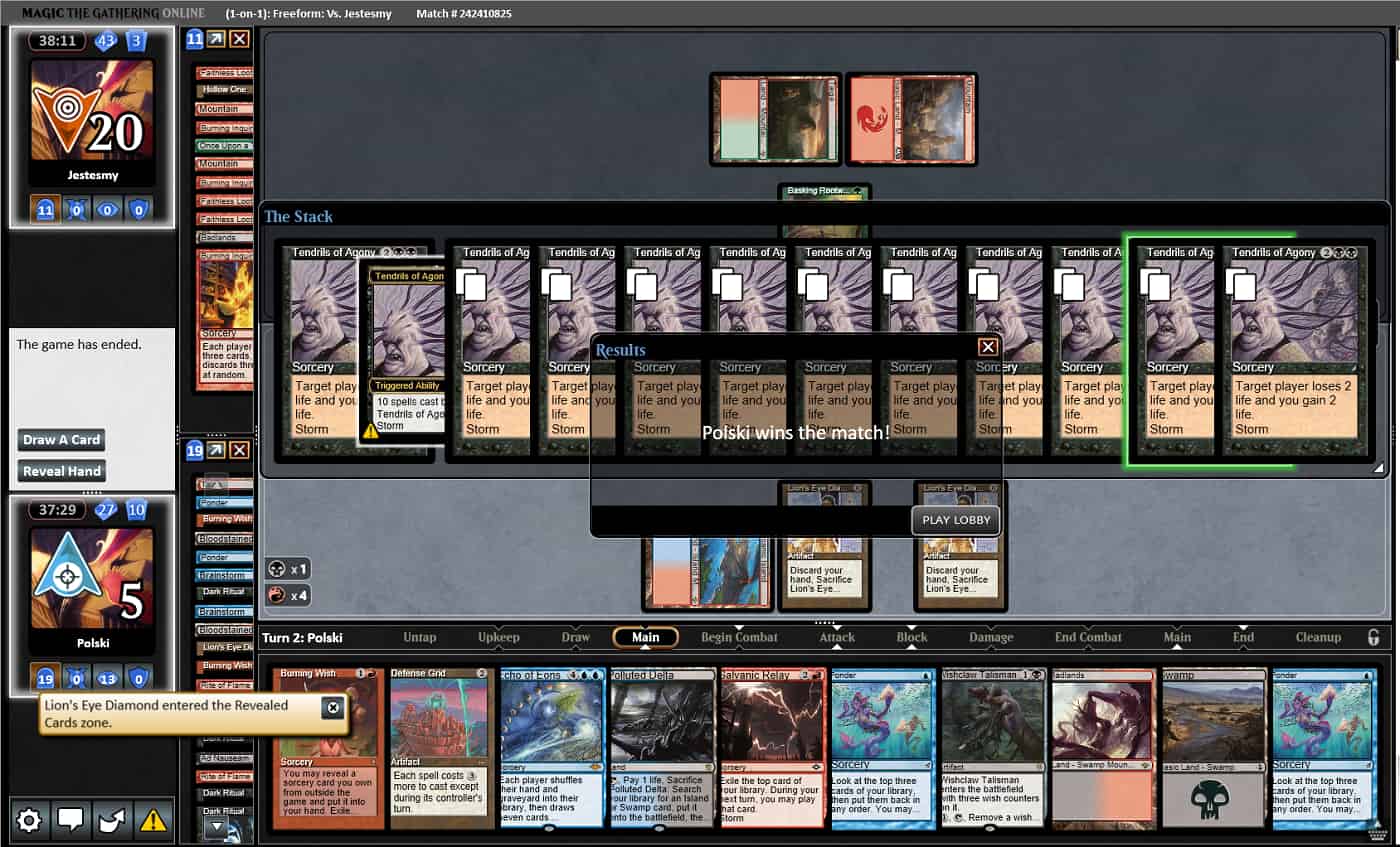 
This matchup can have very lopsided games. Either TES does what it does and wins quickly, or Madness has a fast start and can win before TES does anything. There isn’t much back and forth or outmaneuvering the opponent. Occasionally, Madness will get a lucky [[Burning Inquiry]], as we saw in my example match, that may be a form of disruption, but that’s about the extent of interaction. This really favors TES because our ideal matchup is a slower deck with no interaction, and that’s exactly what Madness is. Although these games didn’t show the true power of Madness, I don’t this matchup in general really showcases it. I do think Madness can be a good deck and I hope it sticks around because it certainly is pretty cool. I’m glad people are innovating and coming up with sweet ideas as new cards get printed. It’s a good reminder that the format is always changing, so we should always be playtesting. I hope you enjoyed this article, can take some of the lessons learned, and apply them to your own playtesting.