Moon Stompy is named after playing [[Magus of the Moon]] and [[Blood Moon]] with aggressive creatures like [[Legion Warboss]] and [[Goblin Rabblemaster]]. In addition to turning off the opponent’s lands, Moon Stompy also uses [[Chalice of the Void]] and [[Trinisphere]] to prevent the opponent from casting spells. Their deck making it difficult for the opponent to cast spells while winning the game quickly with fast creatures is a great formula for Legacy.

How does Moon Stompy matchup against TES?

[[Blood Moon]], [[Magus of the Moon]] – Most decks in Legacy are playing dual lands, fetchlands, and lands with abilities. Moon Stompy tries to exploit this by playing [[Blood Moon]] and [[Magus of the Moon]] to prevent the opponent from casting spells. Against TES this can be hit or miss. We only have a basic [[Swamp]], so sometimes it can turn off our lands, but we also have 14 sources of artifact mana. We also have many red spells. Therefore, we can still cast them under a [[Blood Moon]].

This matchup is all about speed. Our primary goal is to try and combo before we get locked out of playing our cards. If Moon Stompy is on the play or gets to play a lock piece before we can combo off, we need try and combo through it or have an immediate answer to it. If not, it will just compound. Every turn the opponent can play a different type of disruptive permanent, and then a creature win the game quickly. The biggest decisions of this matchup is knowing what hands to keep and what hands to mulligan. If it doesn’t have the potential to combo in the first or the second turn it’s a mulligan. We have to keep hands that can combo on the first two turns or an [[Abrupt Decay]] or [[Chain of Vapor]] to handle a disruptive permanent. The opponent is going to be looking to beat us with that same mindset. This makes those turns the key turns of the matchup, and we want to focus on what the opening hand does at the beginning of the game.

Moon Stompy tries to disrupt us on the board, and not on the stack. This makes [[Veil of Summer]] and [[Defense Grid]] not that great. [[Veil of Summer]] can help us resolve cards through a [[Chalice of the Void]]. It’s not that reliable, but it’s why I keep one copy in. [[Chain of Vapor]] and [[Abrupt Decay]] are easy inclusions because they answer most of the problematic permanents.

To kick off the first game, I was on the play and I kept my opening seven cards, but my opponent mulliganed down to six cards. I had lands, a [[Lotus Petal]], [[Brainstorm]], [[Wishclaw Talisman]], and an [[Ad Nauseam]]. I would just need this [[Brainstorm]] to find some rituals and I could have a quick combo. I spent my first turn just playing a land, and my opponent played a [[Fable of the Mirror-Breaker]]. On my second turn, I led off with the [[Brainstorm]]. 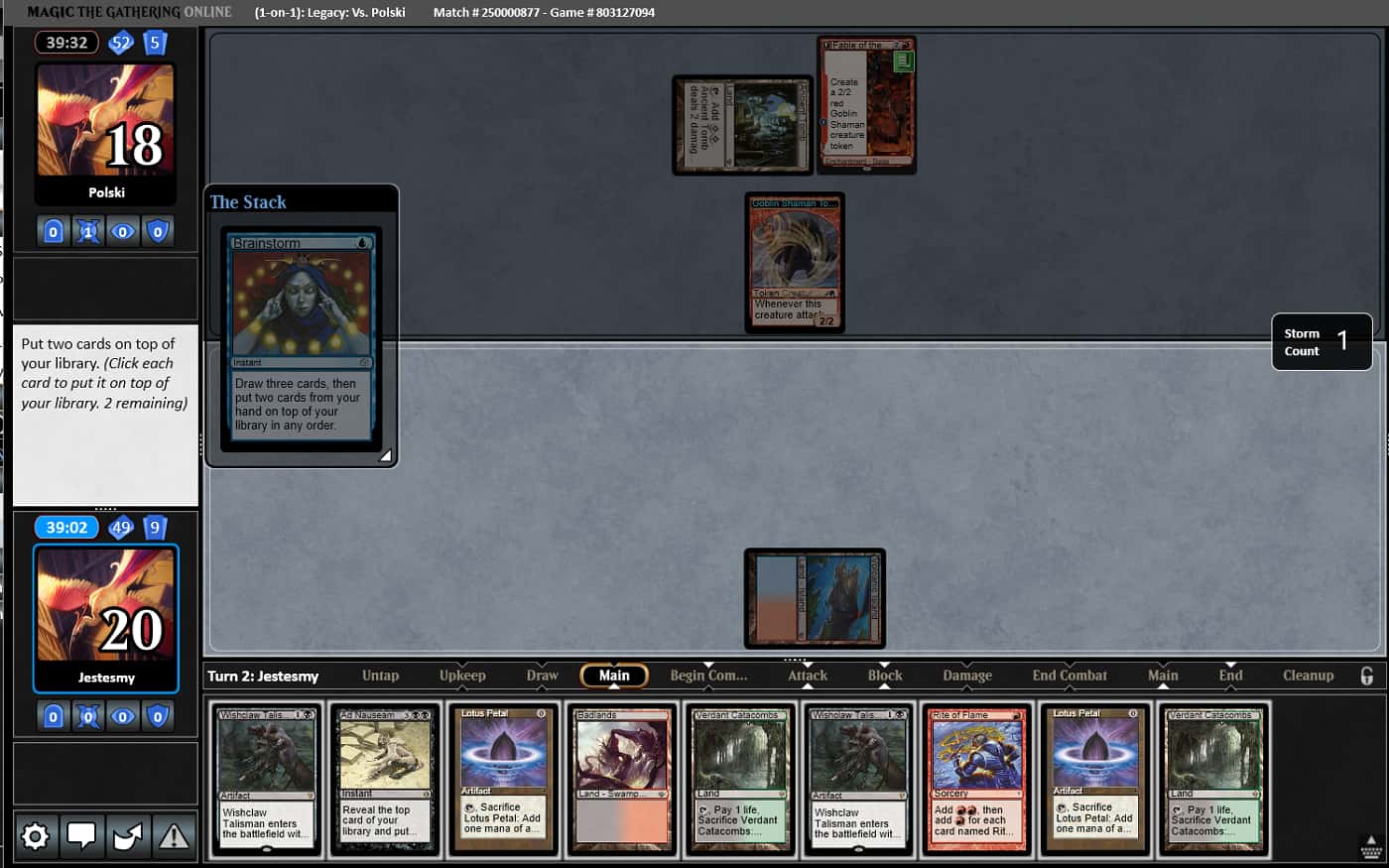 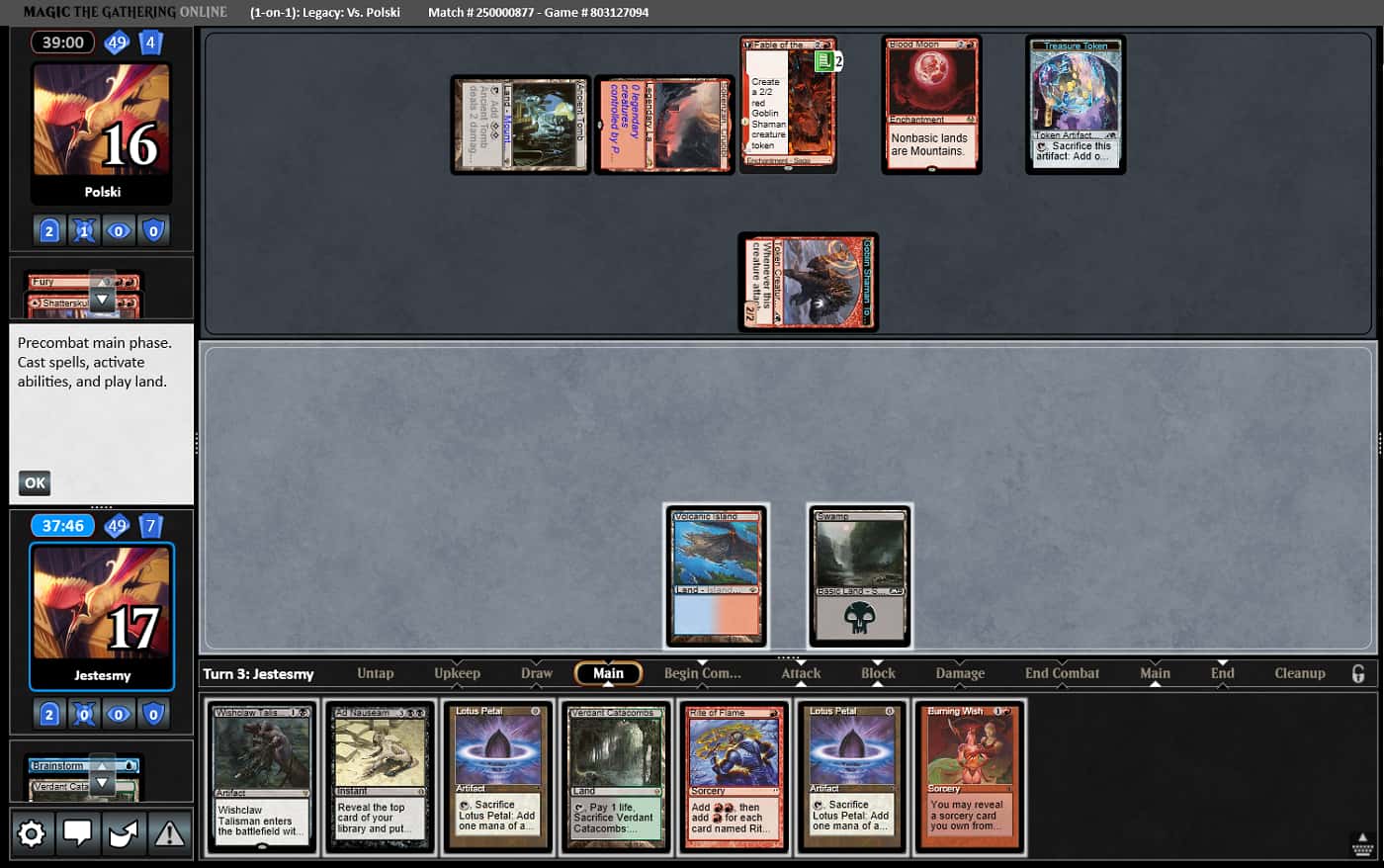 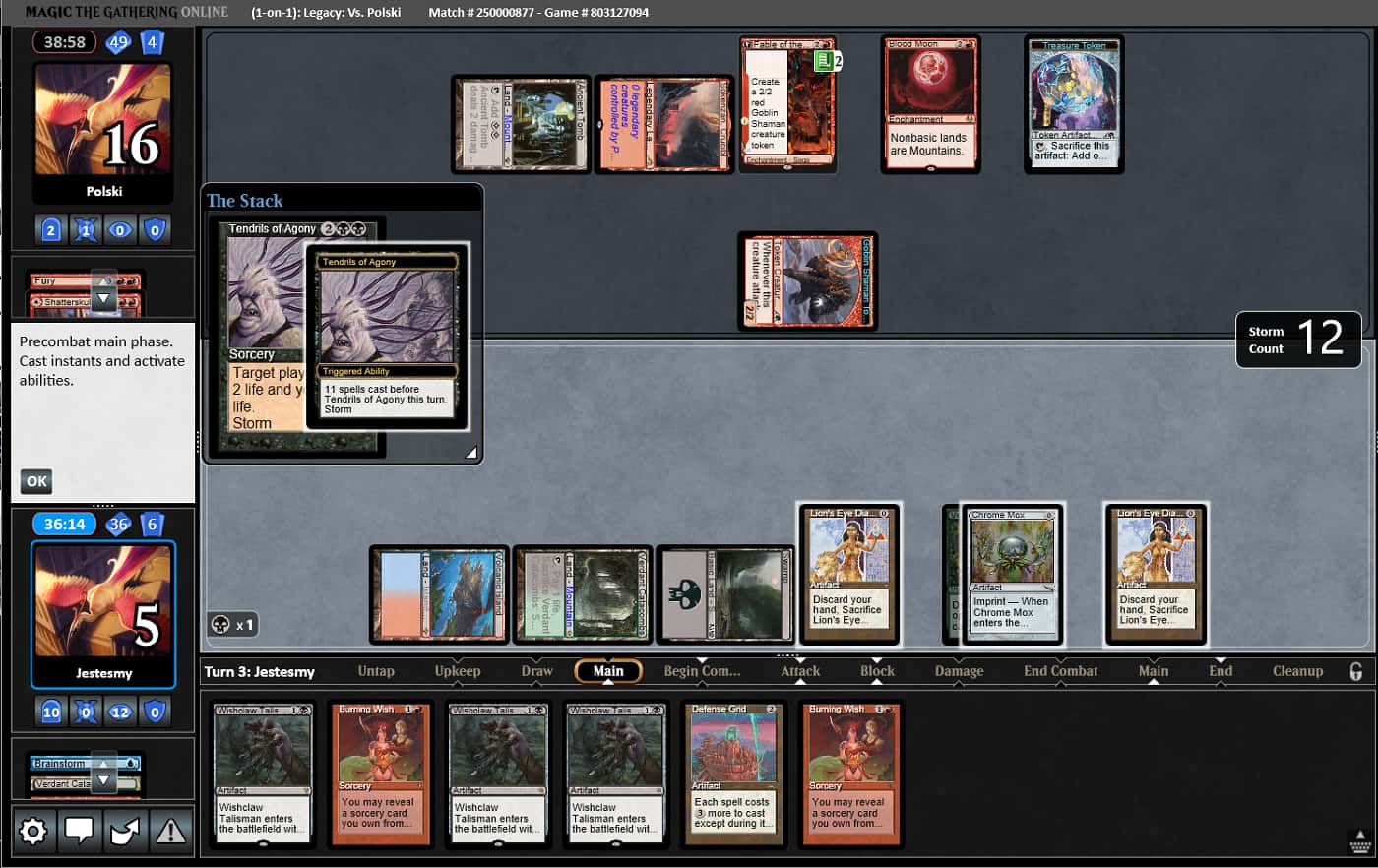 I sideboarded like I recommended and I mulliganed to six cards, and my opponent to five cards. I kept a hand with double [[Lion’s Eye Diamond]], two lands, [[Abrupt Decay]], and [[Wishclaw Talisman]]. They played a [[Chalice of the Void]] on zero for their first turn, and I immediately drew an answer in [[Chain of Vapor]] for my first turn. My plan was to just play a land and at the end of my opponent’s turn [[Chain of Vapor]] on the [[Chalice of the Void]] to combo on my second turn. 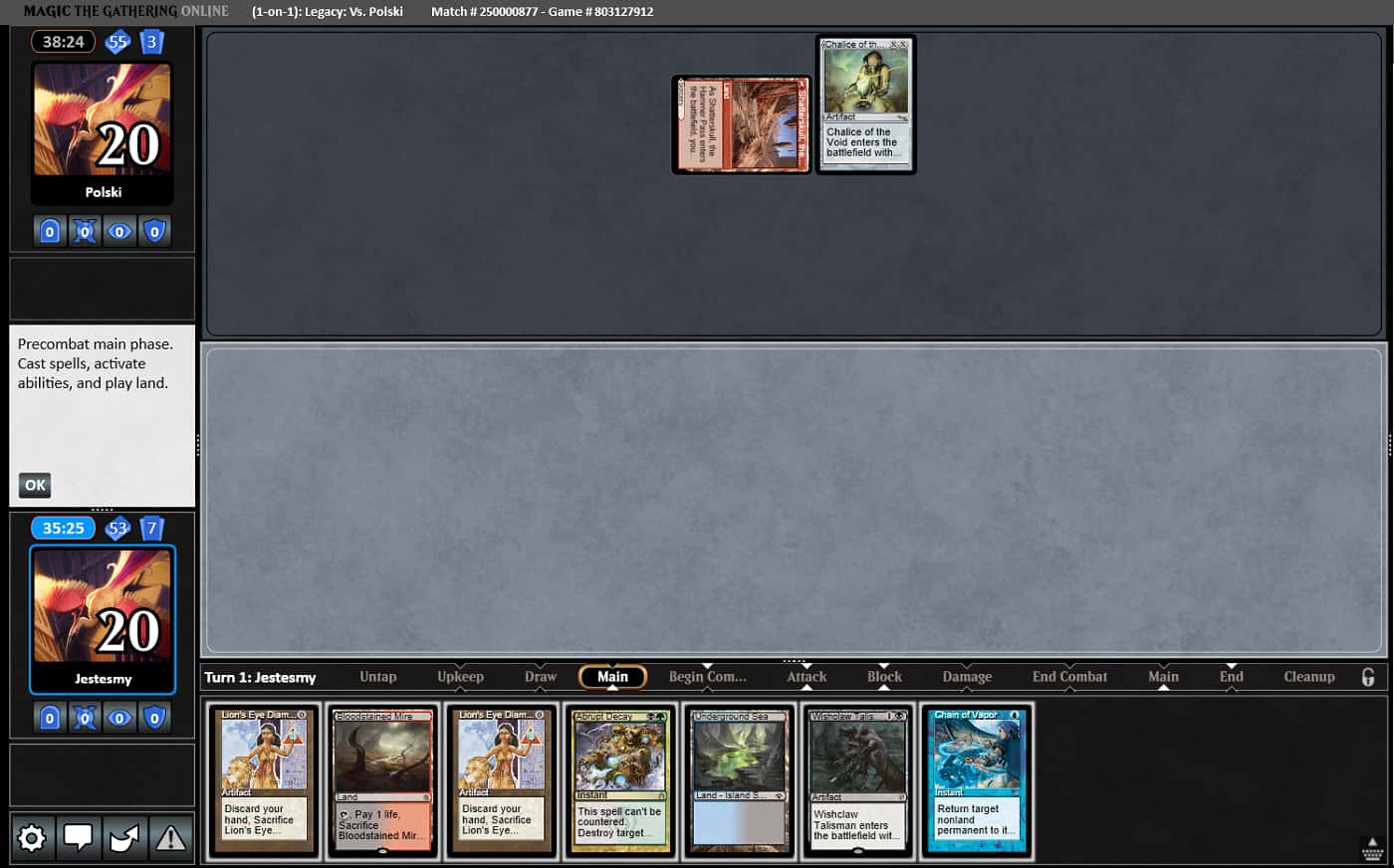 My opponent didn’t do anything on their second turn, and I was able to [[Chain of Vapor]] on their [[Chalice of the Void]]. From there, it was to win with both copies of [[Lion’s Eye Diamond]] and the [[Wishclaw Talisman]] for [[Ad Nauseam]]. 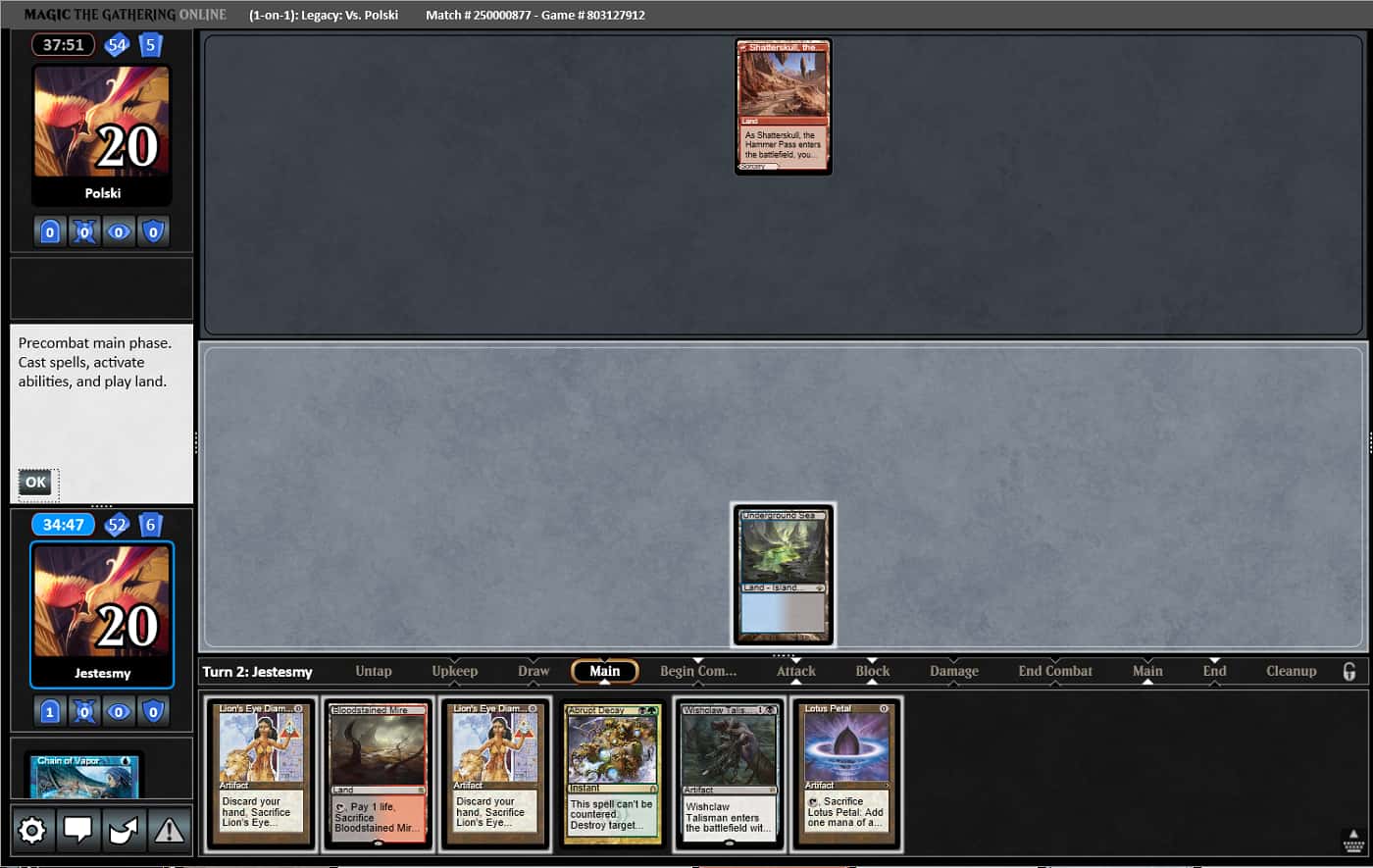 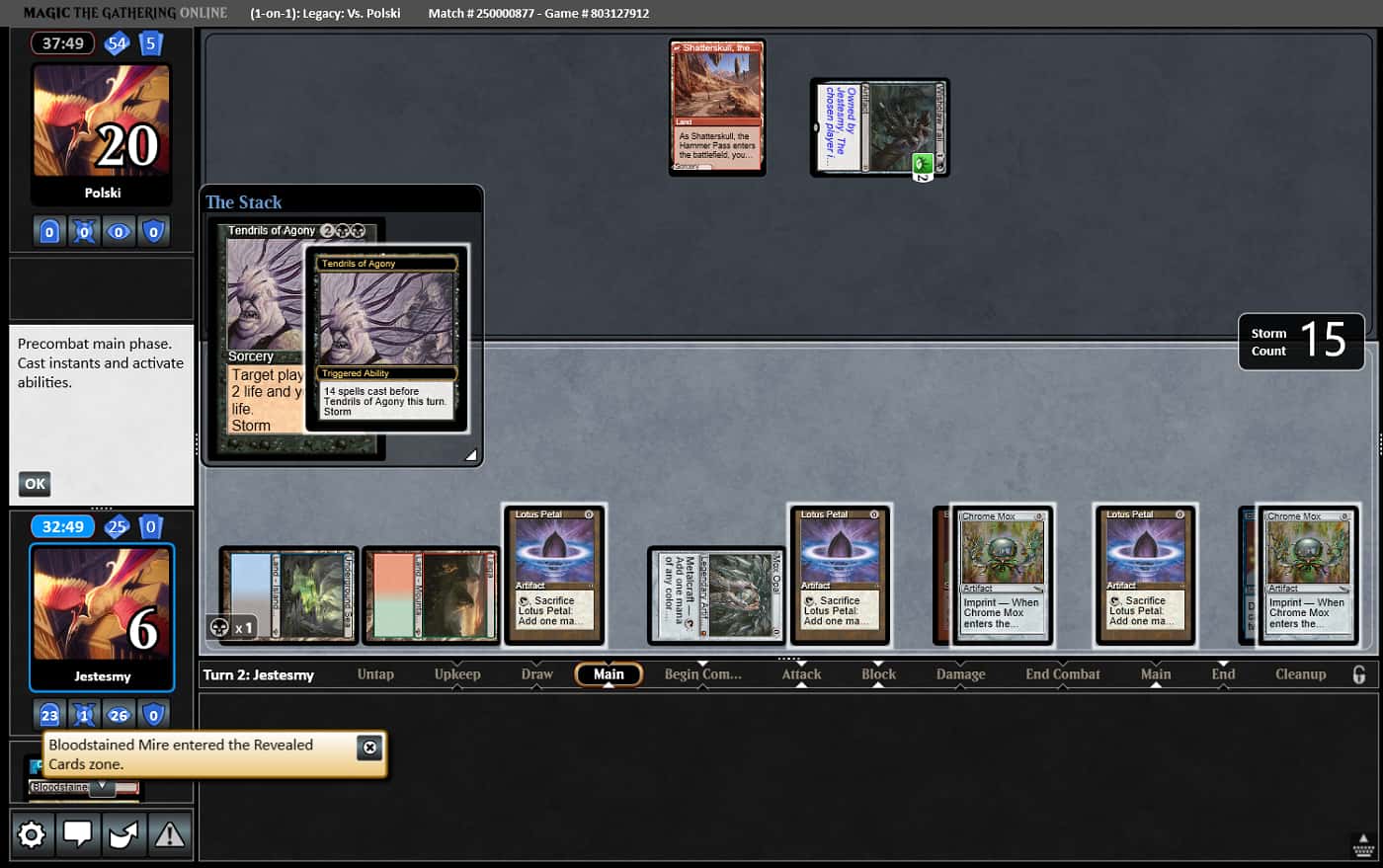 I always enjoy comboing through lock pieces, and especially a [[Chalice of the Void]], so I wanted to include an additional scenario for fun. It was turn four and my opponent had two copies of [[Magus of the Moon]] and a [[Chalice of the Void]] on one. Those two can be difficult to win through, especially with four one mana cards in my hand. I was also down to nine life after being attacked several times and sacrificing fetch lands, but with that much mana and a [[Wishclaw Talisman]], I was able to go for [[Ad Nauseam]] with a chance of winning. 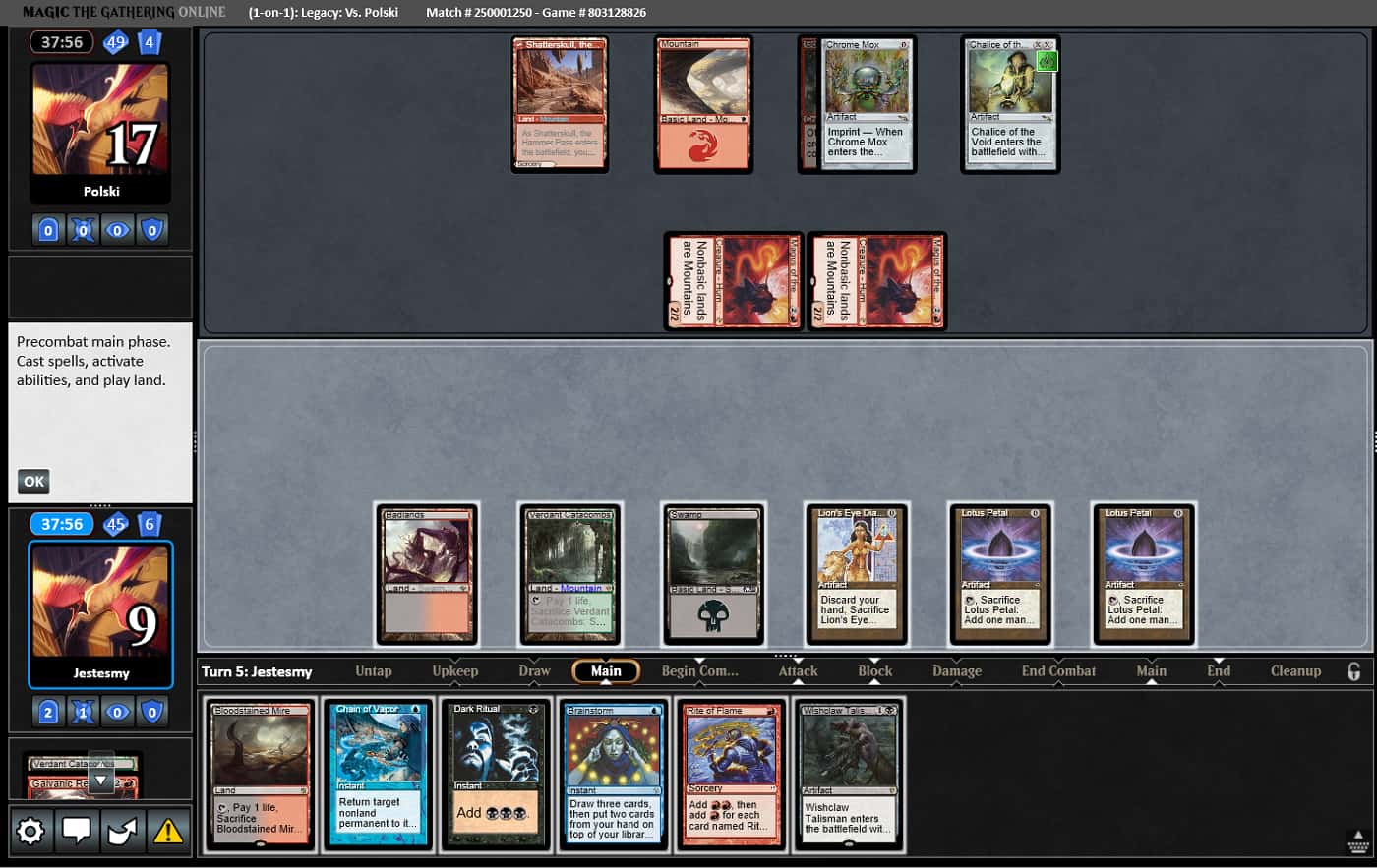 Thankfully, eight life was all I needed to find the resources to win the game. 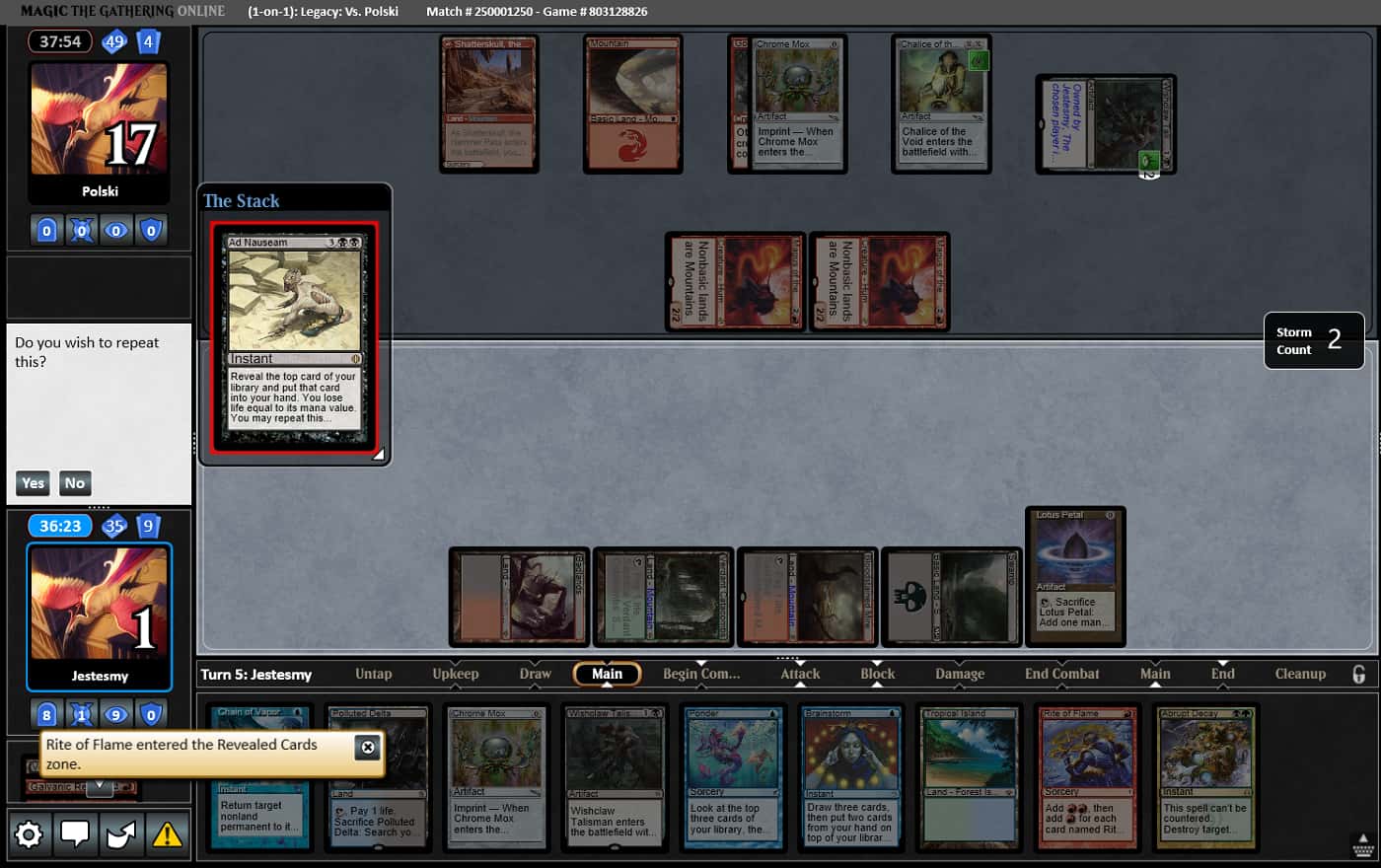 
Unfortunately for Moon Stompy, these games didn’t play out in their favor. Moon Stompy is great at playing rather disruptive permanents and ending the game quickly. TES is also really good at winning the game quickly, and usually before Moon Stompy can assemble their disruption. Most games TES can win before or through a lock piece, like demonstrated in my example games. Not all hands allow for that though, so the sideboard removal helps in those cases. That is why I believe TES is favored. I hope you enjoyed this article, can take some of the lessons learned, and apply them to your own playtesting.