Painter is a deck that revolves around the card [[Painter’s Servant]] and [[Grindstone]]. [[Painter’s Servant]] chooses a color, and then all cards become that color. When you then activate [[Grindstone]], you can continue repeating the process because the cards share at least one color since they are all the same color. The process will repeat until the opponent has zero cards left in their library. [[Painter’s Servant]] is also a combo with cards like [[Pyroblast]] and [[Red Elemental Blast]] since you can choose the color blue and counter or destroy any card. Painter has been around for quite some time and in many different variations, but all versions play to that same combo. It also now plays [[Karn, the Great Creator]] and [[Urza’s Saga]] with a tutor package. Painter is a powerful deck that has been gaining popularity with these newer additions, so it’s important we know the matchup.

How does Painter matchup against TES?

[[Pyroblast]], [[Red Elemental Blast]] – Painter usually played between 6-8 copies of these cards. Not just because they want to counter and destroy blue cards, but because it’s another combo with [[Painter’s Servant]]. You can use [[Painter’s Servant]] to make all cards blue and then you can counter or destroy any card because every card is now blue.

This matchup is entirely about speed. Neither TES nor Painter interact with each other much and the game plan from both sides is to have a quick combo. Painter is looking to assemble [[Painter’s Servant]] and then either [[Grindstone]] or several copies of [[Pyroblast]] or [[Red Elemental Blast]] to counter our important spells. Our way to win is to be faster, but without having to rely on blue cards to do it. Keeping a hand that relies on a [[Brainstorm]] or a [[Ponder]] is not a good way to win this matchup. Most fast combo hands without relying on a blue card are good enough to beat most things out of Painter. It’s one of the main reasons TES is one of the better combo decks against Painter, because we are the fastest. That is TES’s strength, so it’s important we lean into that and mulligan any hand that is slow or reliant on specific draws or cantrips to get there. The six cards will usually be better.

This sideboarding strategy is pretty straight forward, bringing in [[Chain of Vapor]] and [[Abrupt Decay]] because they remove a [[Painter’s Servant]], [[Grindstone]], and most other annoying permanents that Painter plays. [[Abrupt Decay]] obviously destroys less permanents, but it’s good enough for the main targets. The cuts of [[Galvanic Relay]], [[Defense Grid]], and two copies of [[Ponder]] are because we want our deck to be as fast and lean as possible. These cards are just too slow, and we need as many cards in our deck to be focused on speed or interaction.

I began the first game on the draw with a great opening seven. It had the potential to turn one an [[Echo of Eons]] with four mana floating, but because I was on the draw, my opponent could have a [[Pyroblast]] or [[Red Elemental Blast]]. I usually would mulligan hands that rely on a blue card, but having [[Burning Wish]] made me keep. My plan was to turn two [[Burning Wish]] with seven mana floating for [[Peer into the Abyss]], so I kept the hand. 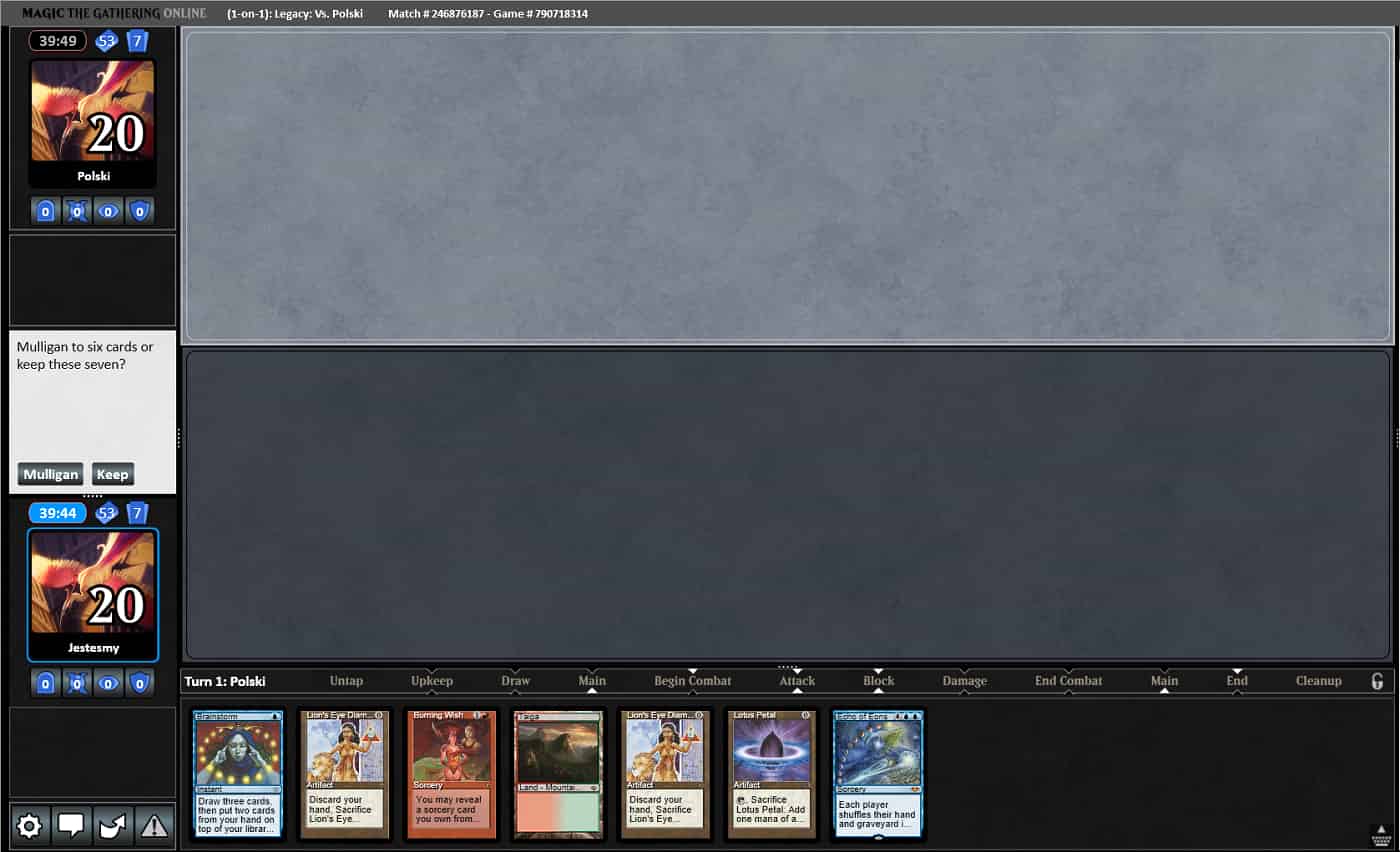 
For the first turn my opponent spent their turn just playing [[Plateau]] and passing. I drew a second land and also just played a land. On my end step my opponent cast [[Enlightened Tutor]] and searched for [[Painter’s Servant]]. They drew it for their turn and played it, choosing the color blue, and played a [[Lotus Petal]]. This represented a [[Pyroblast]]. 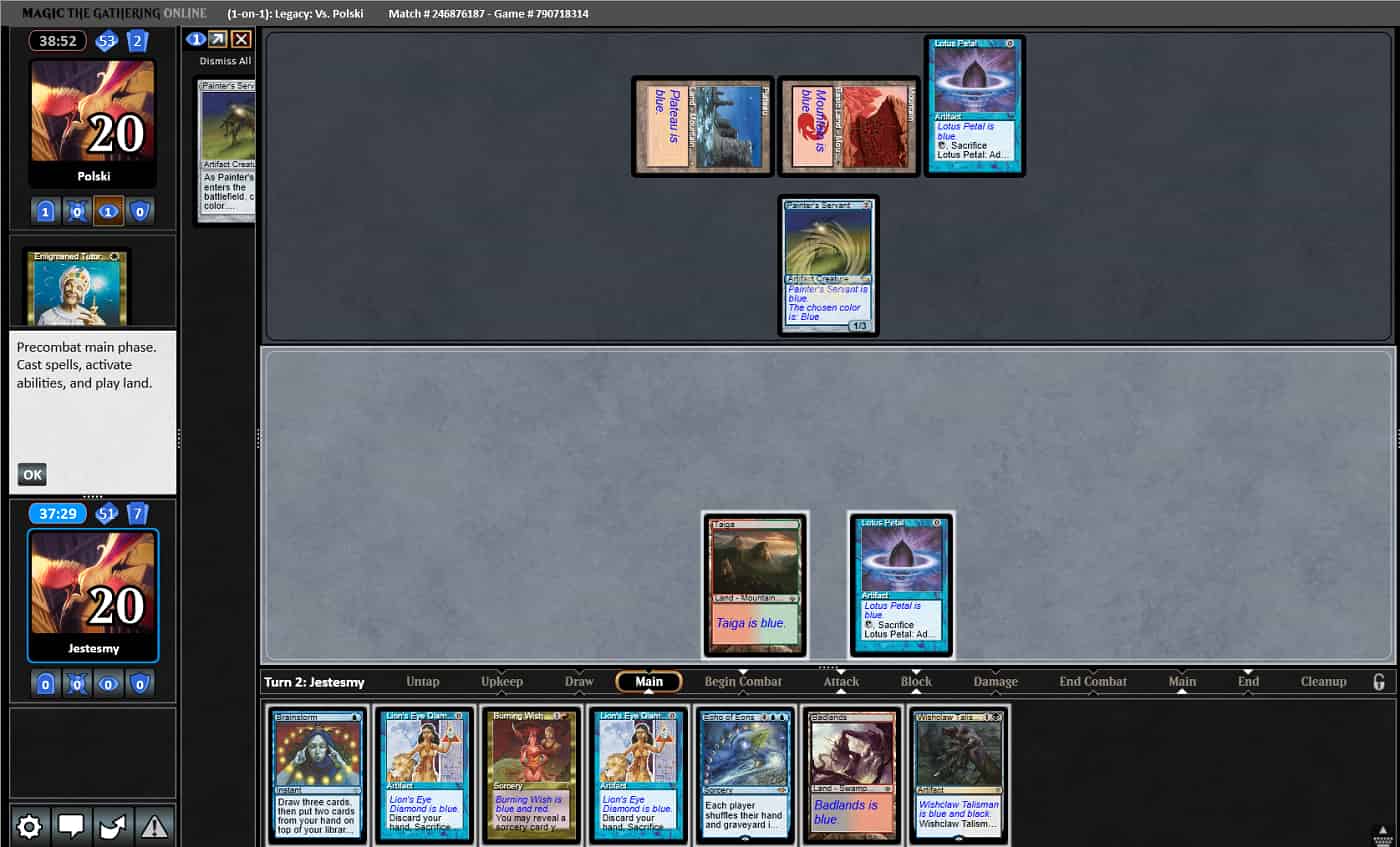 My turn two plan was to [[Burning Wish]] for [[Peer into the Abyss]], but with [[Painter’s Servant]] and [[Pyroblast]] being able to counter any spell I played I had to rethink my plan. That’s when I saw the ability to cast two [[Echo of Eons]] through a [[Pyroblast]]. I began the combo by casting [[Burning Wish]] for the second [[Echo of Eons]], but it was met with their [[Red Elemental Blast]]. 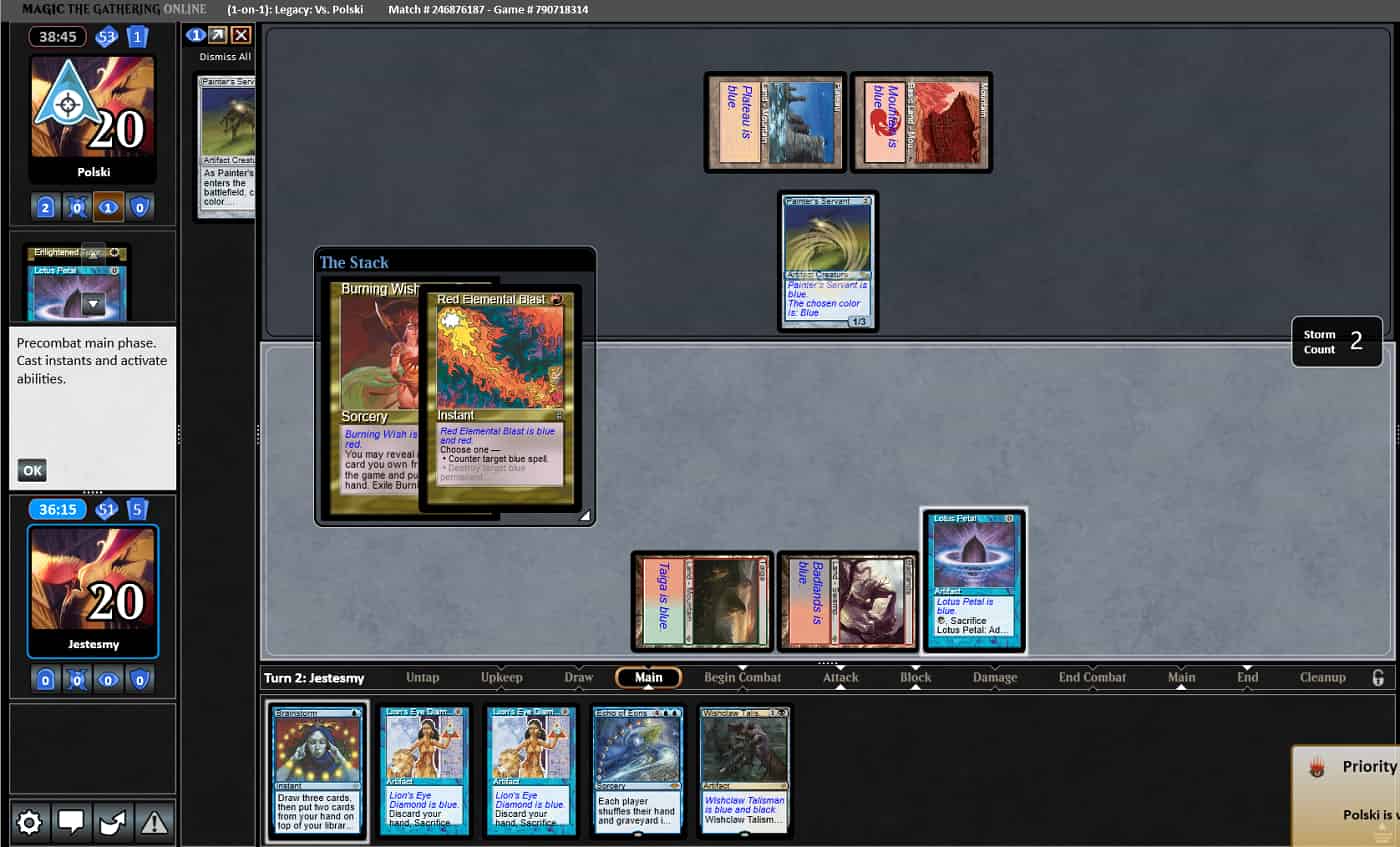 The opponent always has the ability to use [[Simian Spirit Guide]] for another counterspell, but I decided to try and use the [[Echo of Eons]] in my hand. It resolved. I had three mana floating and a [[Lotus Petal]], but unfortunately my new seven cards didn’t have a way to continue comboing. I just played a [[Wishclaw Talisman]] and passed the turn. 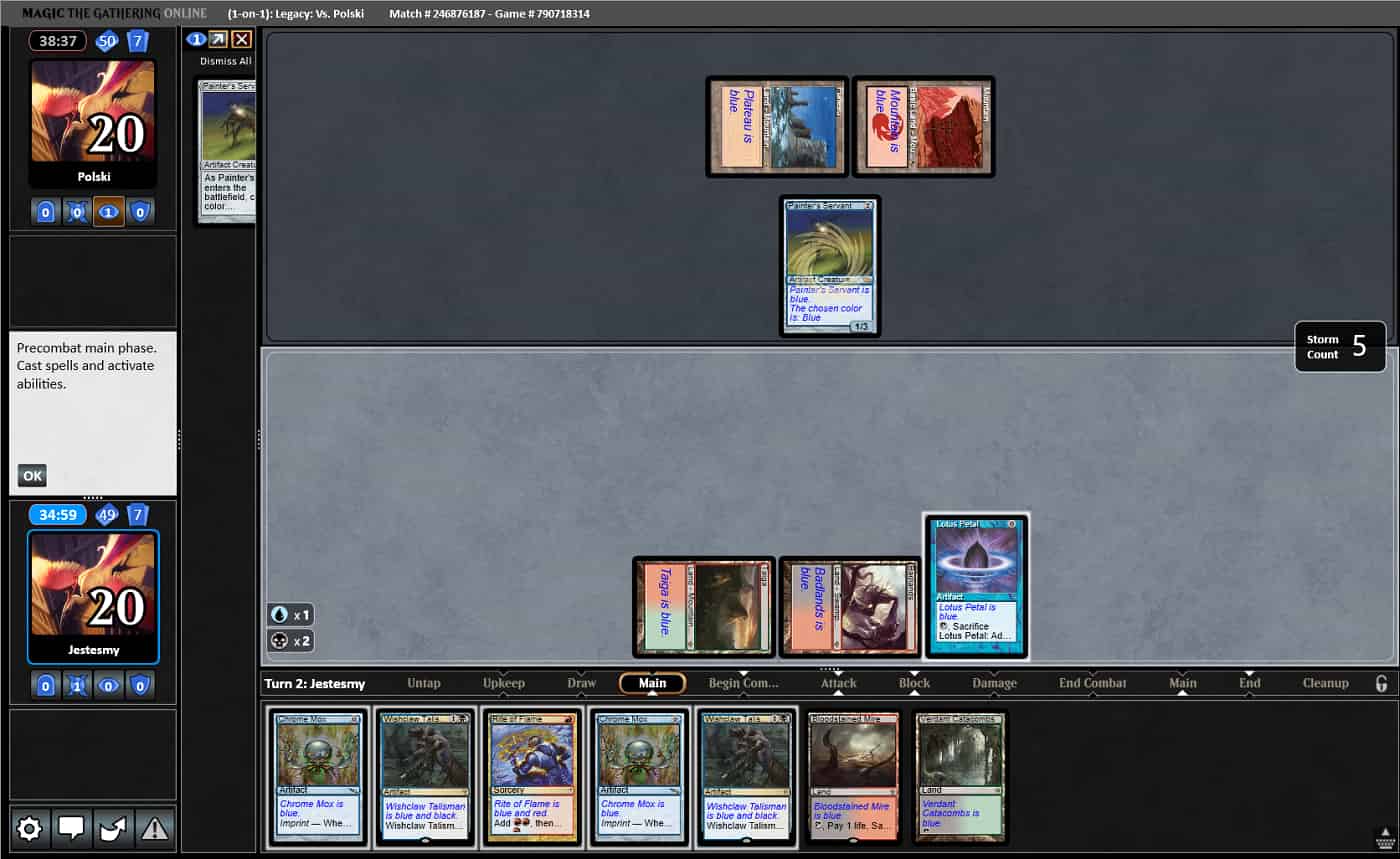 My opponent’s seven cards were much better than mine as they drew a [[Simian Spirit Guide]] and a [[Grindstone]] that they could cast and activate with the [[Painter’s Servant]] to win the game. 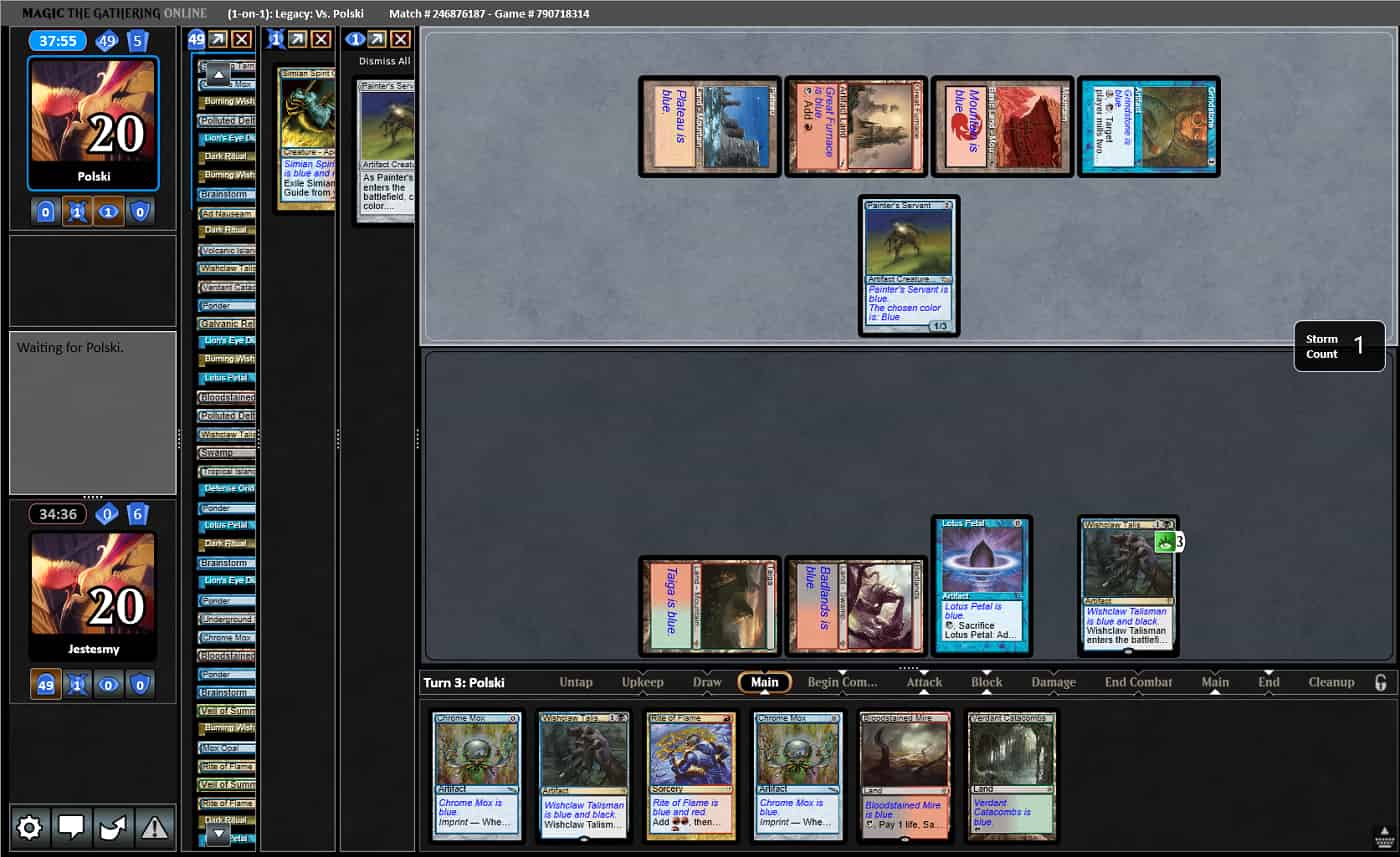 For the second game, I sideboarded like I recommended and began on the play. My opening hand had access to seven mana which is one short of [[Wishclaw Talisman]] for [[Ad Nauseam]], but I had access to a [[Brainstorm]] to look for more mana. If I didn’t find any, I could have used [[Wishclaw Talisman]] for [[Echo of Eons]] to flashback instead. [[Brainstorm]] only gets much worse once my opponent has a land in play because of [[Pyroblast]], so I decided to cast it on the first turn. The three cards I drew were all mana, and lots of it, so that would allow me to [[Ad Nauseam]]. 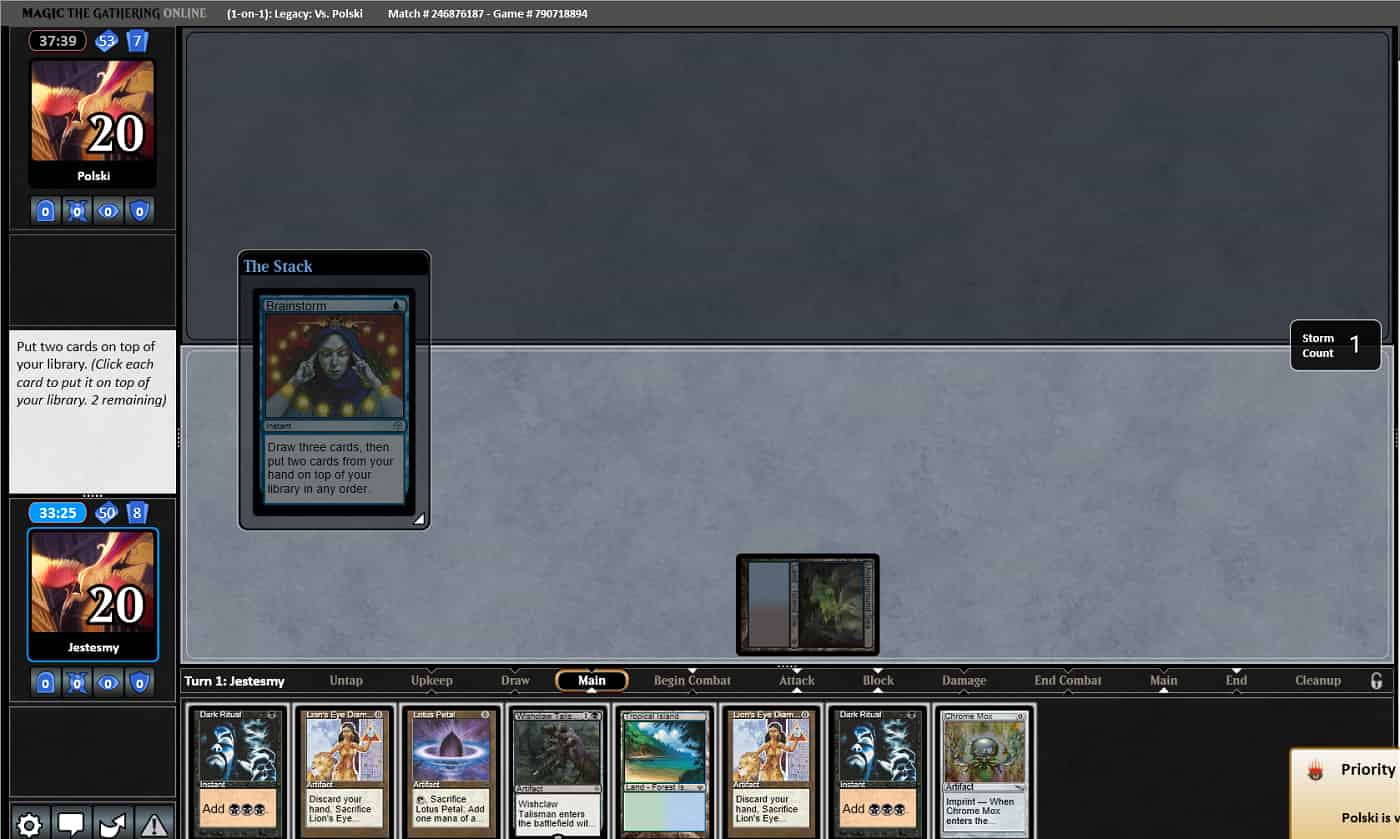 As usual, [[Ad Nauseam]] from 20 life was good enough to win the game. 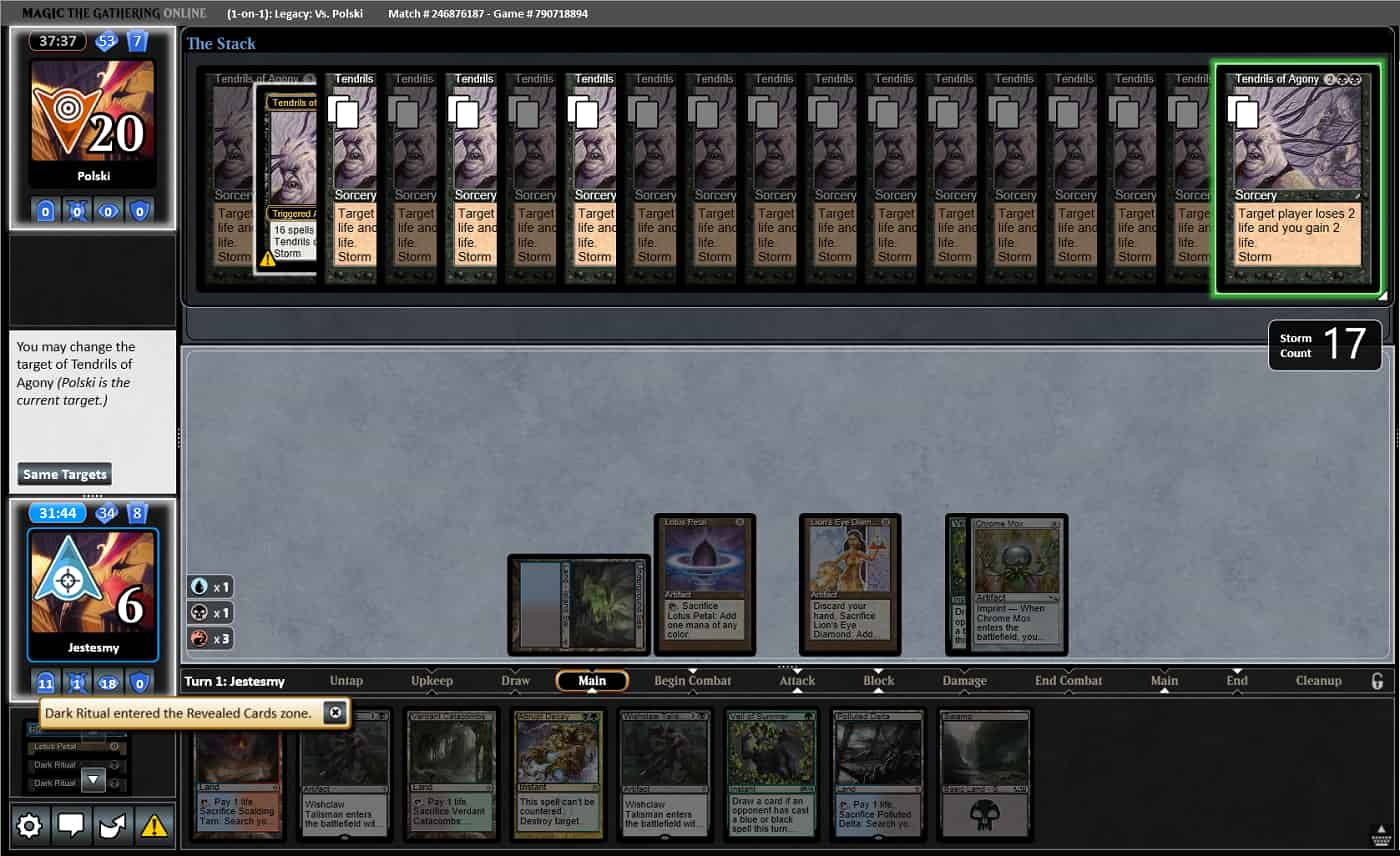 For game three, my seven card hand was not good, so I had to mulligan down to six cards. The next hand was great. I had enough mana to [[Wishclaw Talisman]] for [[Ad Nauseam]] on turn one again, but [[Ad Nauseam]] was in my hand. Thankfully, I mulliganed and put on the bottom of my library. Now, I had access to a turn-one [[Ad Nauseam]] without having to use a blue card if I drew a black mana source or black card to imprint with [[Chrome Mox]] for my turn. My opponent just spent their turn playing a land and passing. 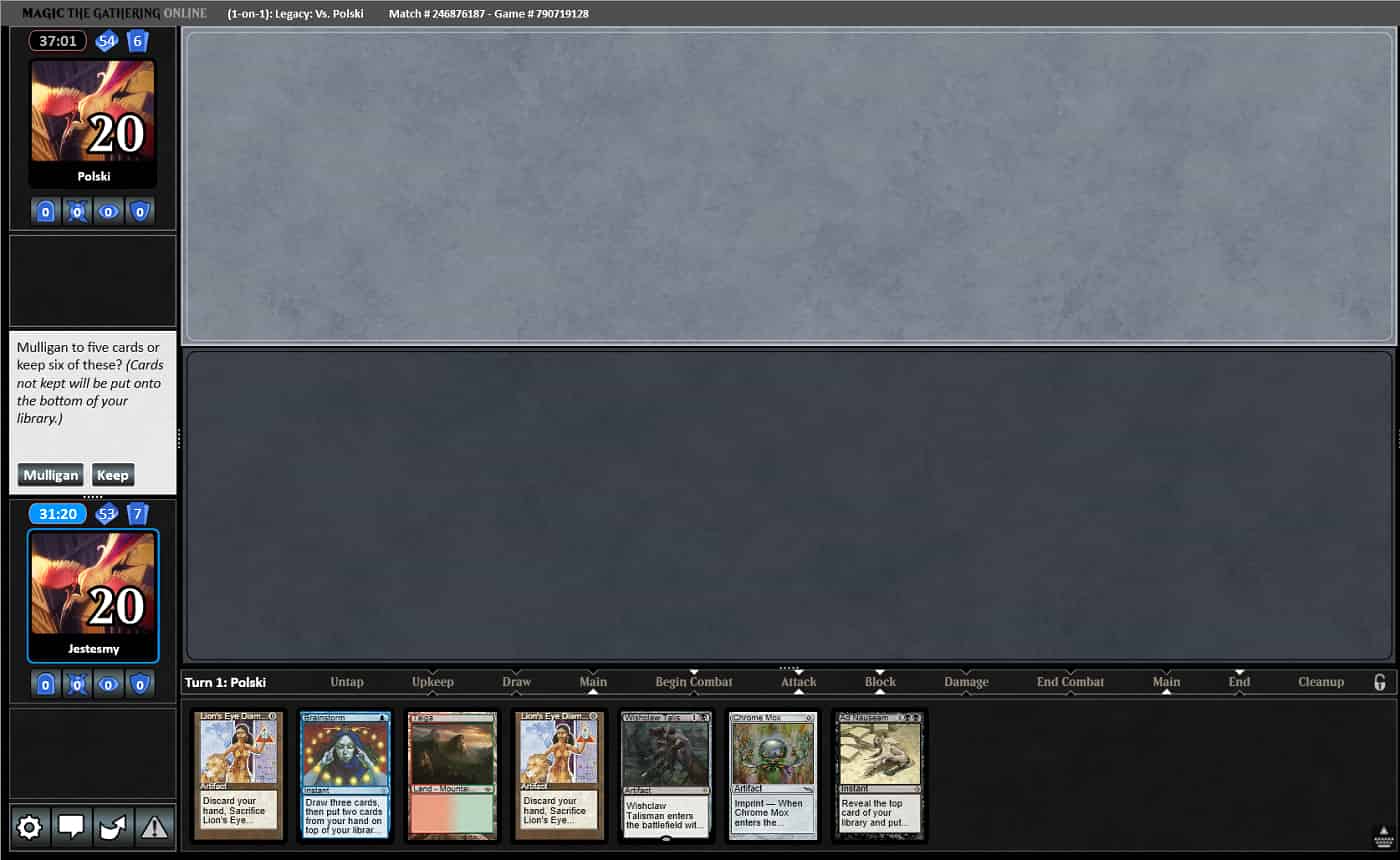 I drew the black card to imprint with [[Chrome Mox]], and like game two, it was easy to win from there with an [[Ad Nauseam]]. 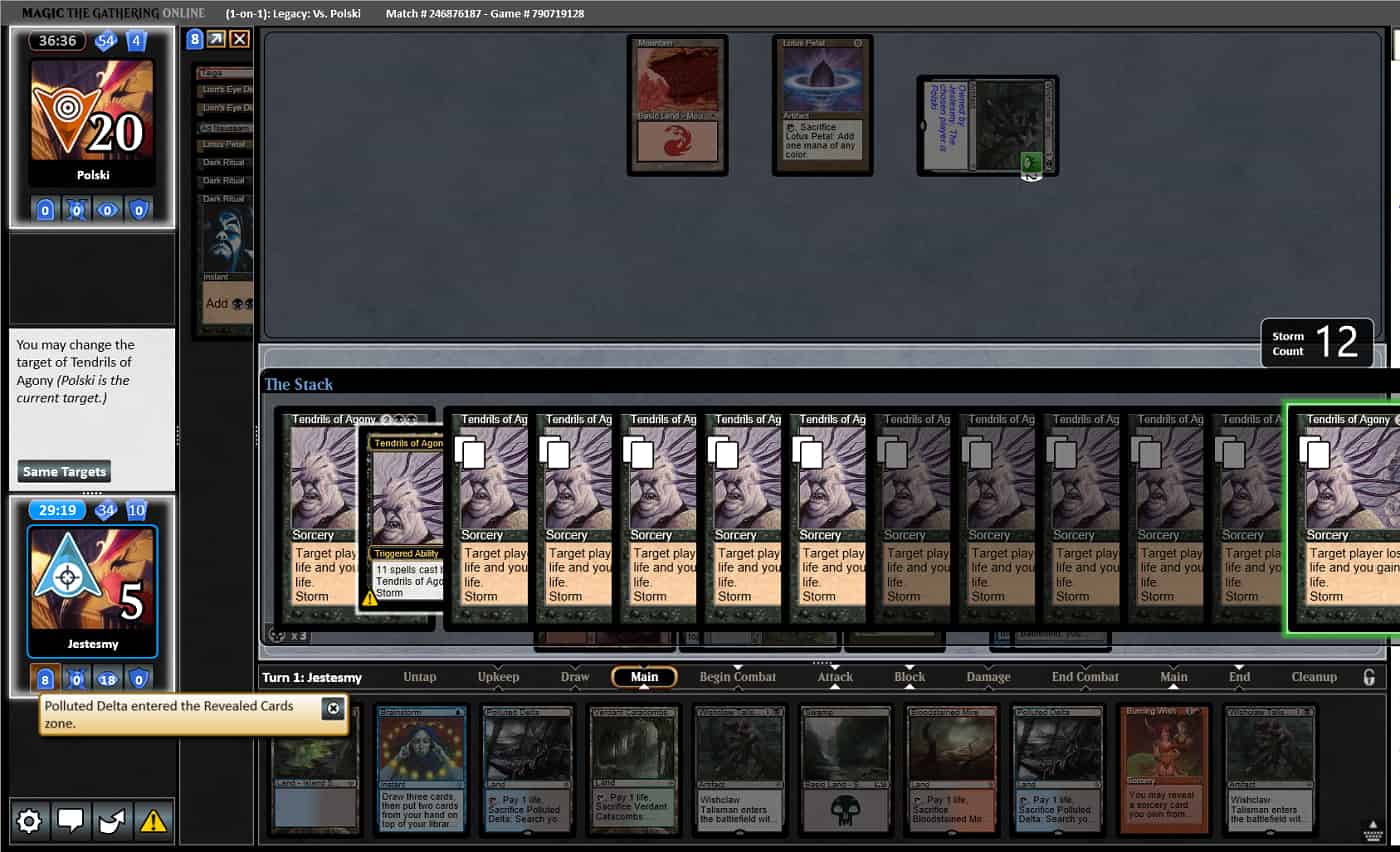 
This example match played about how I expected it. The matchup is certainly in TES’s favor, and we have the upper hand in the earlier turns. There’s not much they can do to disrupt us in the first turn or two of the game, and TES can lean into that by mulliganing into hands that can combo early on. If the game lasts a few turns, Painter can assemble a combo of their own, and that’s exactly how the games played out. Painter is another deck that got several new cards to use and test out, and as a result, we are seeing several different versions of it and more players playing it. It’s a deck that comes and goes with popularity, but with all of the new cards it could be here to stay with the right configuration. I hope you enjoyed this article, can take some of the lessons learned, and apply them to your own playtesting.