Sneak & Show is a deck that focuses on casting and abusing [[Show and Tell]] and [[Sneak Attack]] in combination with [[Griselbrand]], and [[Emrakul, the Aeons Torn]]. [[Emrakul, the Aeons Torn]] making the opponent sacrifice six permanents, or [[Griselbrand]] drawing many cards to find an [[Emrakul, the Aeons Torn]] or several counterspells can win the game immediately. Any of these combinations are extremely powerful and usually good enough to win the game, and because of that the rest of the deck is filled with cantrips and counterspells to assemble and protect the combo. Sneak & Show has been around for many years and has always good a good and popular deck choice, and one that can give other combo decks a hard time, so it’s important we know this matchup.

How does Sneak & Show matchup against TES?

[[Sneak Attack]], [[Show and Tell]], [[Emrakul, the Aeons Torn]], [[Griselbrand]], [[Omniscience]] – These are the main pieces of the combo for Sneak & Show and against TES they’re going to be trying to assemble it as quickly as possible. More than likely, they will mulligan any slower hand that can’t combo in the first couple of turns. [[Show and Tell]] for [[Emrakul, the Aeons Torn]] is the worst combination because it still gives us an additional turn to try and combo off.

[[Force of Will]], [[Spell Pierce]] – Sneak & Show is a blue-based deck, so their protection and disruption come in the form of counterspells. This allows them to delay other decks while trying to assemble their combo, protect their combo against opposition disruption, and stop other combos, like Storm. A combo with counterspells is a deadly pair because it’s tough to play against. Opposing decks have to worry about if they go too fast then they run into a counterspell, but if they play slower then they just lose to Sneak & Shows combo.

[[Lotus Petal]], [[Ancient Tomb]], [[Simian Spirit Guide]] – [[Show and Tell]] and [[Sneak Attack]] are expensive and slow by Legacy standards, so in order to make those cards work, Sneak & Show needs to play cards that accelerate their combo. By playing these fast mana cards Sneak & Show can be faster than a lot of other decks and even turn one a [[Show and Tell]].

This matchup is a balance between going fast enough to win before their combo, but also not too fast that we run into counterspells and don’t have any protection. The opponent is going to be worrying about the same thing. When they cast a [[Brainstorm]] or a [[Ponder]] they’ll be looking for counterspells to stop us, while also looking to assemble their combo. The matchup is a race to find both protection and the combo for both players. This makes the key turns of the matchup between two and three. This gives enough time for us to try and assemble our combo with protection before the opponent can. Our deck is faster at comboing and we need to lean into that when deciding on whether to keep an opening hand. We should be keeping an opening hand that has protection and a quick combo or just short of that to be able to draw in the first two turns.

The first game of the match wasn’t much of a game as I was on the play and had a turn one undisrupted combo. Going into game two I don’t sideboard in this matchup and was on the draw. I had plenty of lands, rituals, and a [[Ponder]] to look for an action spell. My opponent and I both spend our first turn casting a [[Ponder]] to setup our future turns. Unfortunately, I didn’t find a way to combo off by my second turn. My opponent spent their third turn playing a [[Sneak Attack]] off a [[Lotus Petal]] and just pass the turn back to me. For my turn, I drew a [[Brainstorm]] and immediately cast it looking for a card to combo with. I found a [[Ponder]] and was going to use that on my next turn to try and win, but I would need to avoid the opponent winning with [[Sneak Attack]] on their turn. 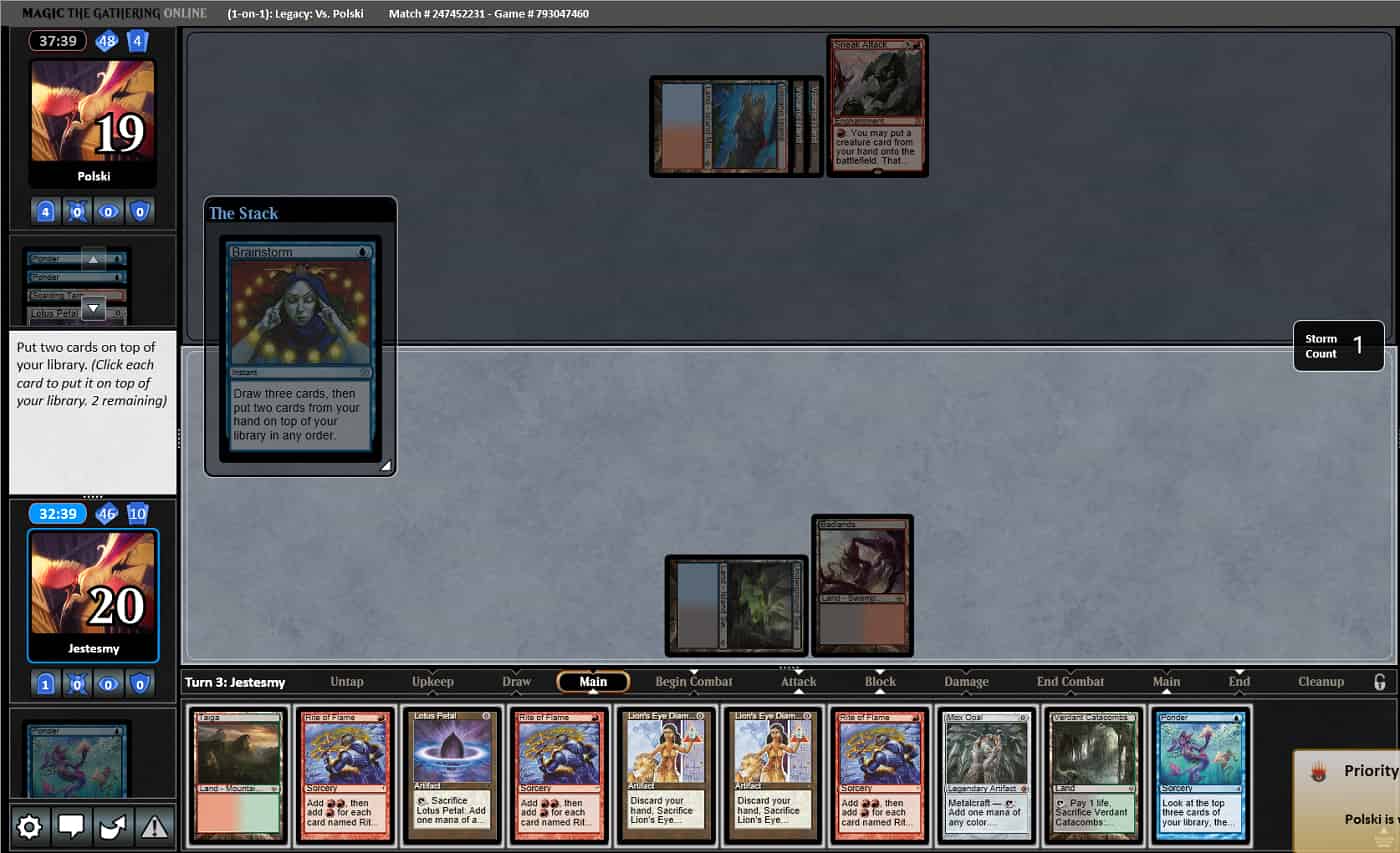 My opponent just drew a card and passed the turn back to me. On my next turn I used the [[Ponder]] and found [[Galvanic Relay]]. That wouldn’t be good enough to win this turn, but I thought it was worth keeping because it beats counterspells. I would just need to survive another turn. I just had all of my artifact mana and one [[Rite of Flame]] to [[Galvanic Relay]] for five Storm. Unfortunately, the five cards weren’t good enough to win on their own next turn. I just passed my turn hoping to survive and draw something on my turn to win. Thankfully, my opponent just spent their next turn casting [[Show and Tell]] and put [[Omniscience]] into play. 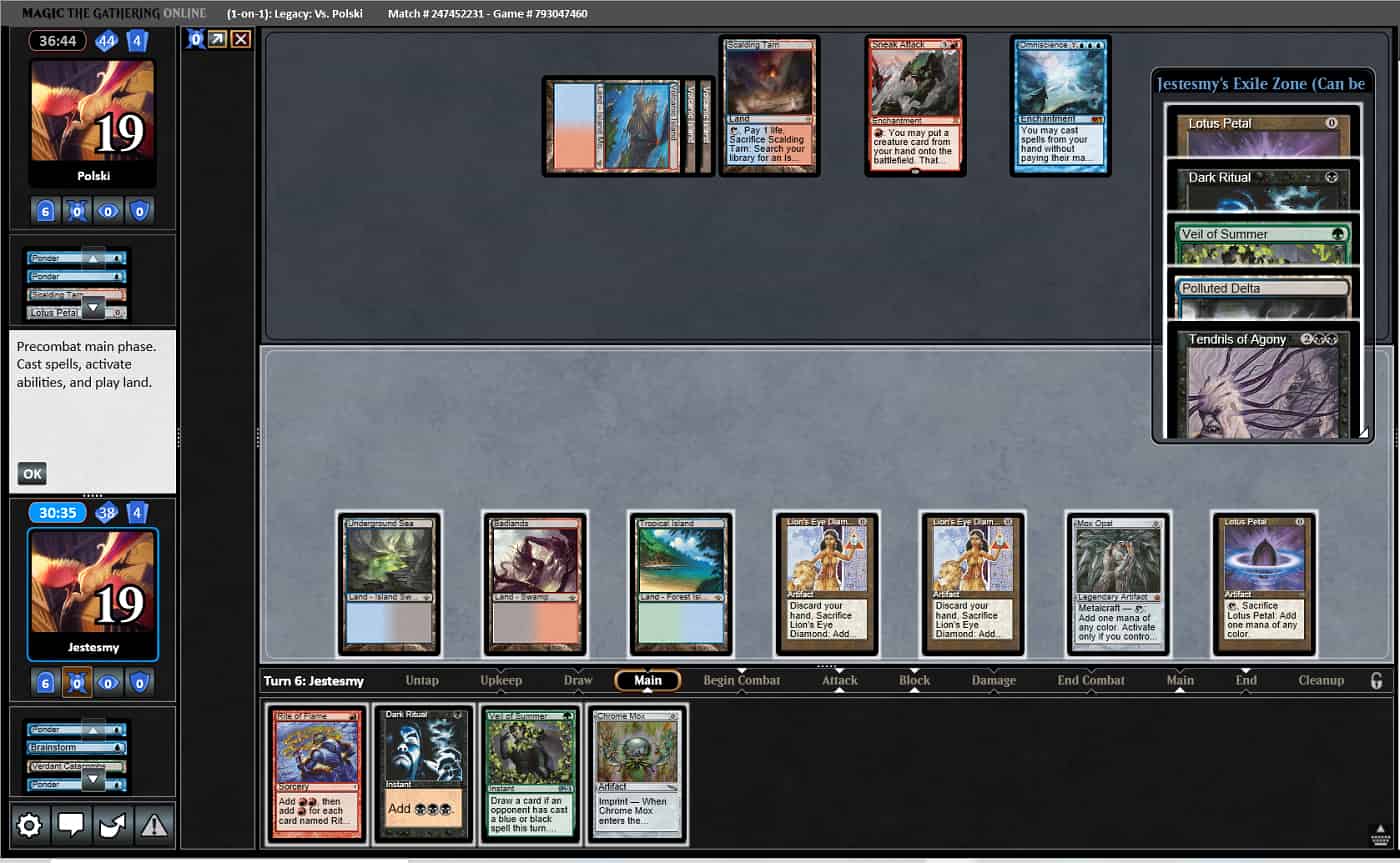 For my turn, I drew a [[Chrome Mox]], which wasn’t good enough to win this turn, so I just used the cards from [[Galvanic Relay]] to cast a small [[Tendrils of Agony]] to put my opponent to 11 life. At least this would make winning in a future turn require less Storm. My opponent then drew a [[Griselbrand]] and put it into play with [[Sneak Attack]]. That was good enough to win the game. 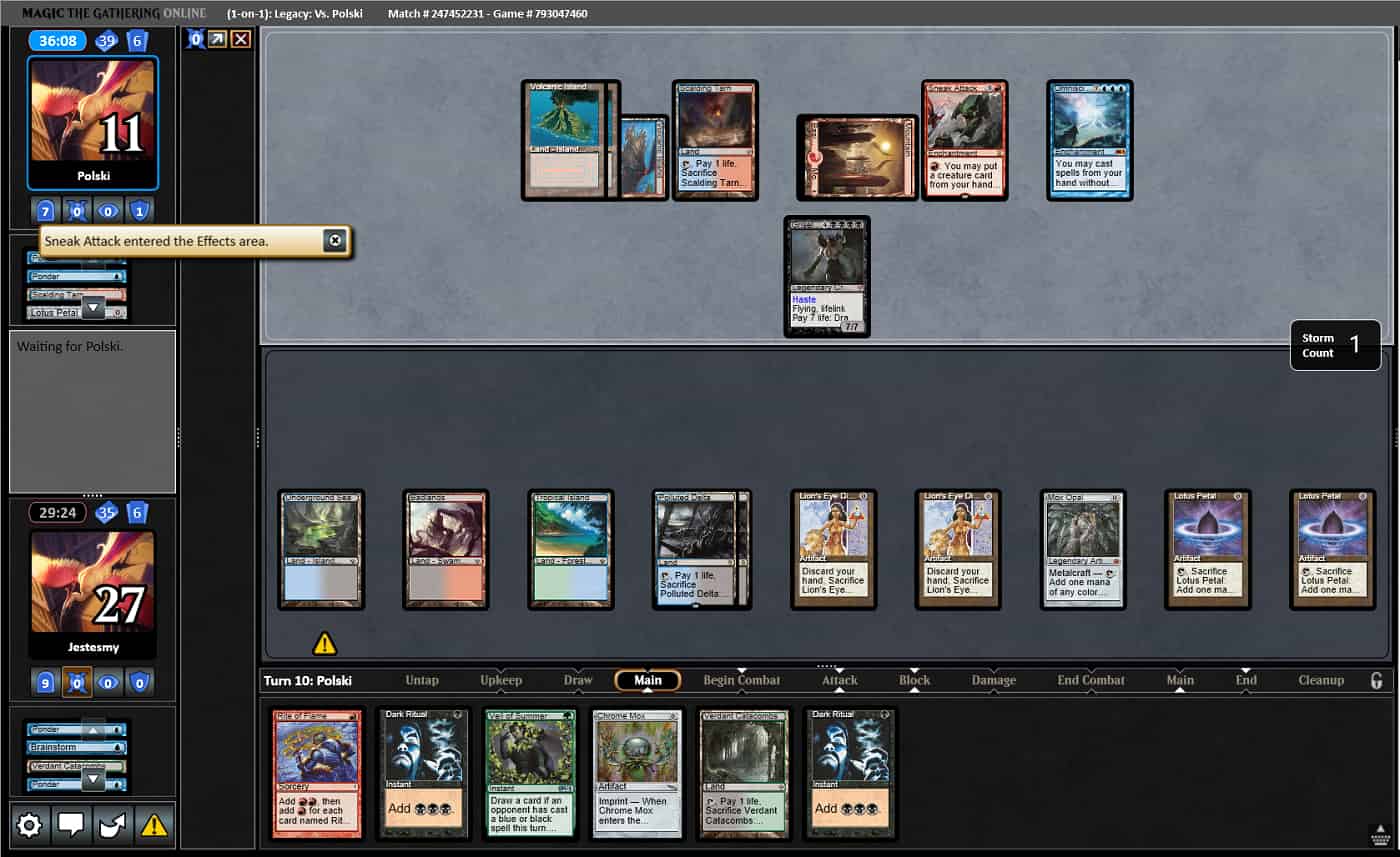 For the third game, I was on the play, and I kept what I believed to be a close hand. It had cantrips, mana, and two ways to win the game with either [[Ad Nauseam]] or [[Wishclaw Talisman]]. This could have led to a win on turn 2-3 if the cantrips found some fast mana, but at the very least it was resilient to counterspells. 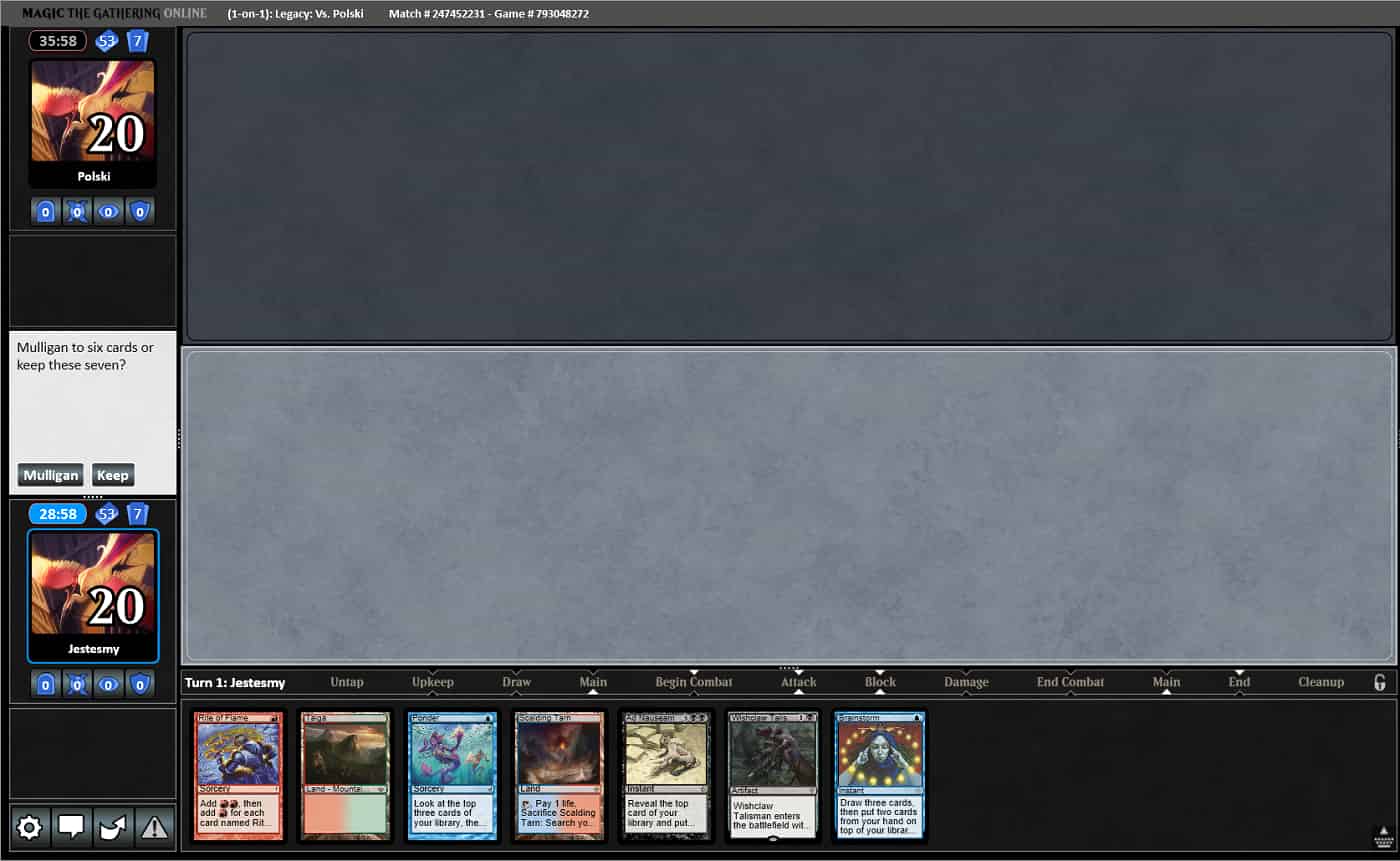 I started the game off with a [[Ponder]] to look for a faster way to combo, and then a [[Brainstorm]] on turn two, but it was countered by [[Spell Pierce]]. 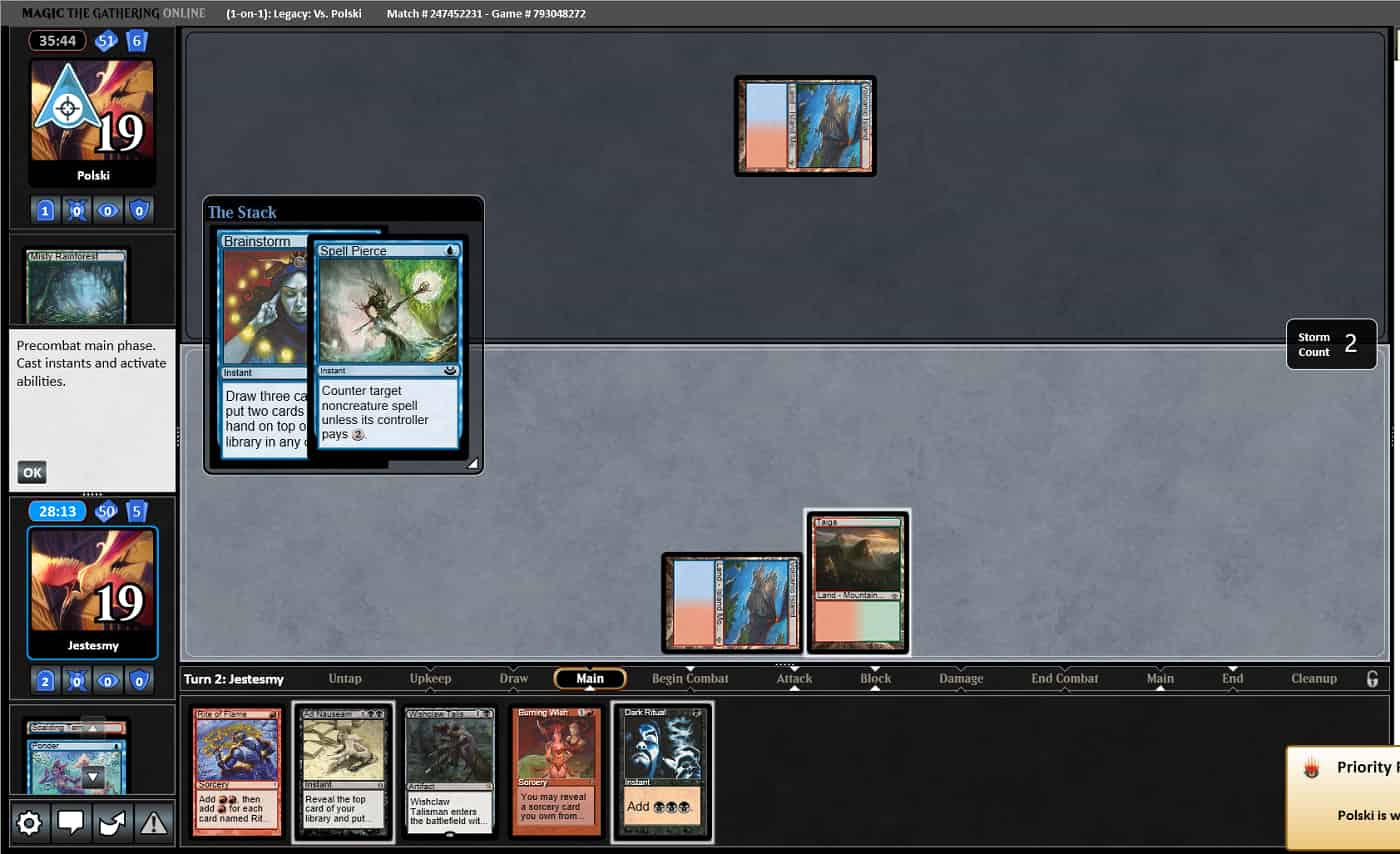 On my next turn, I tried to resolve a [[Burning Wish]], and it was met with another counterspell in [[Force of Will]]. 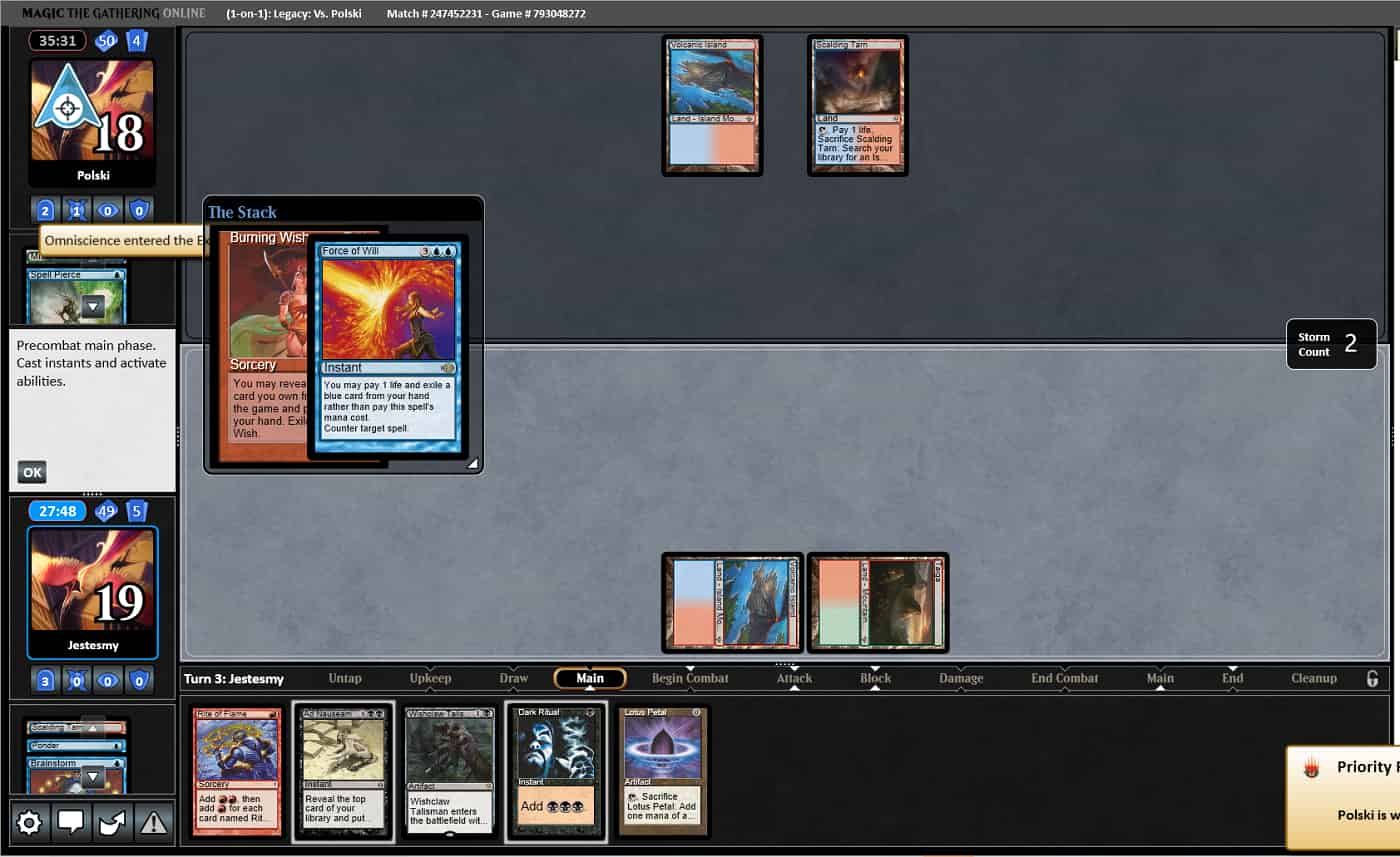 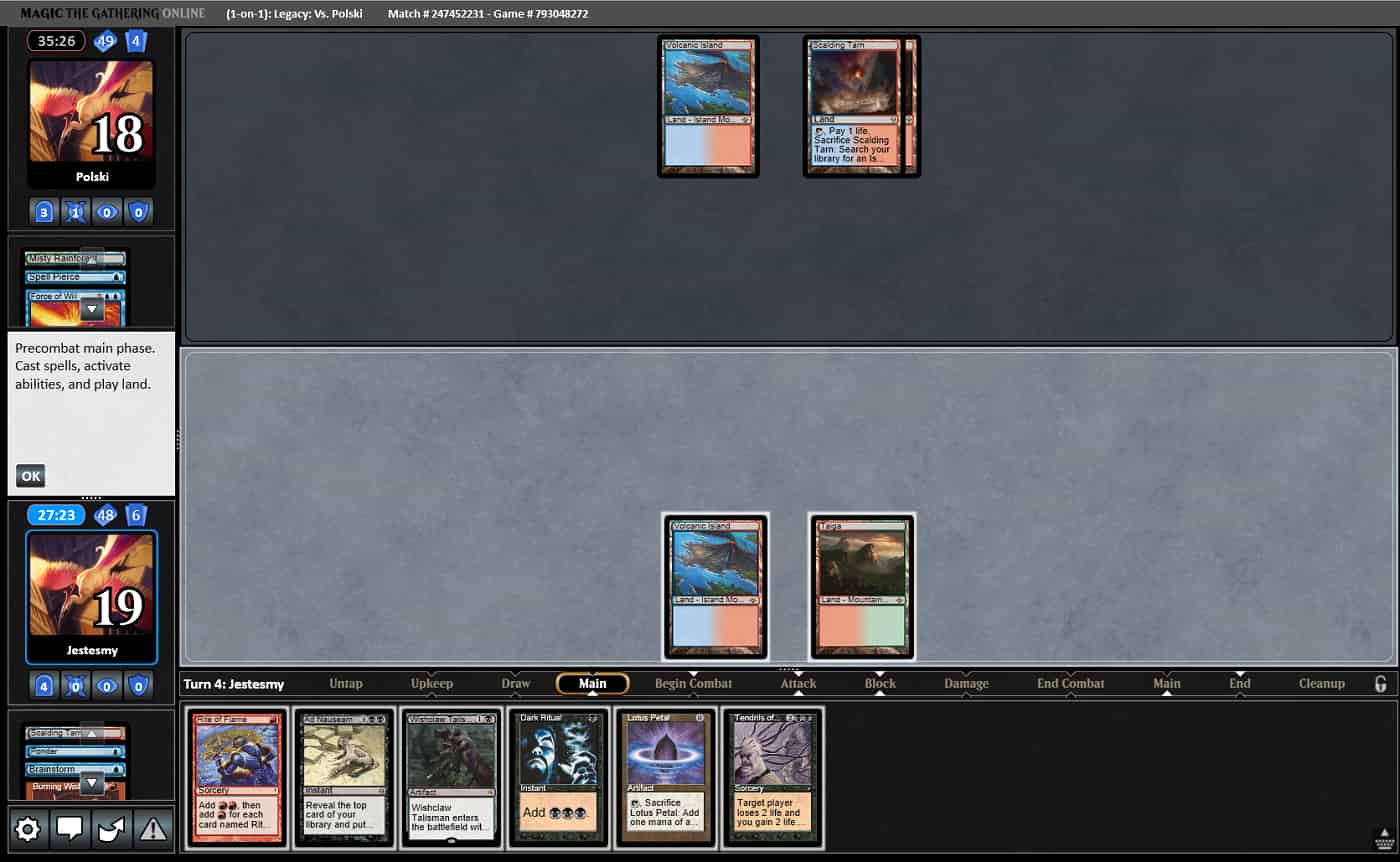 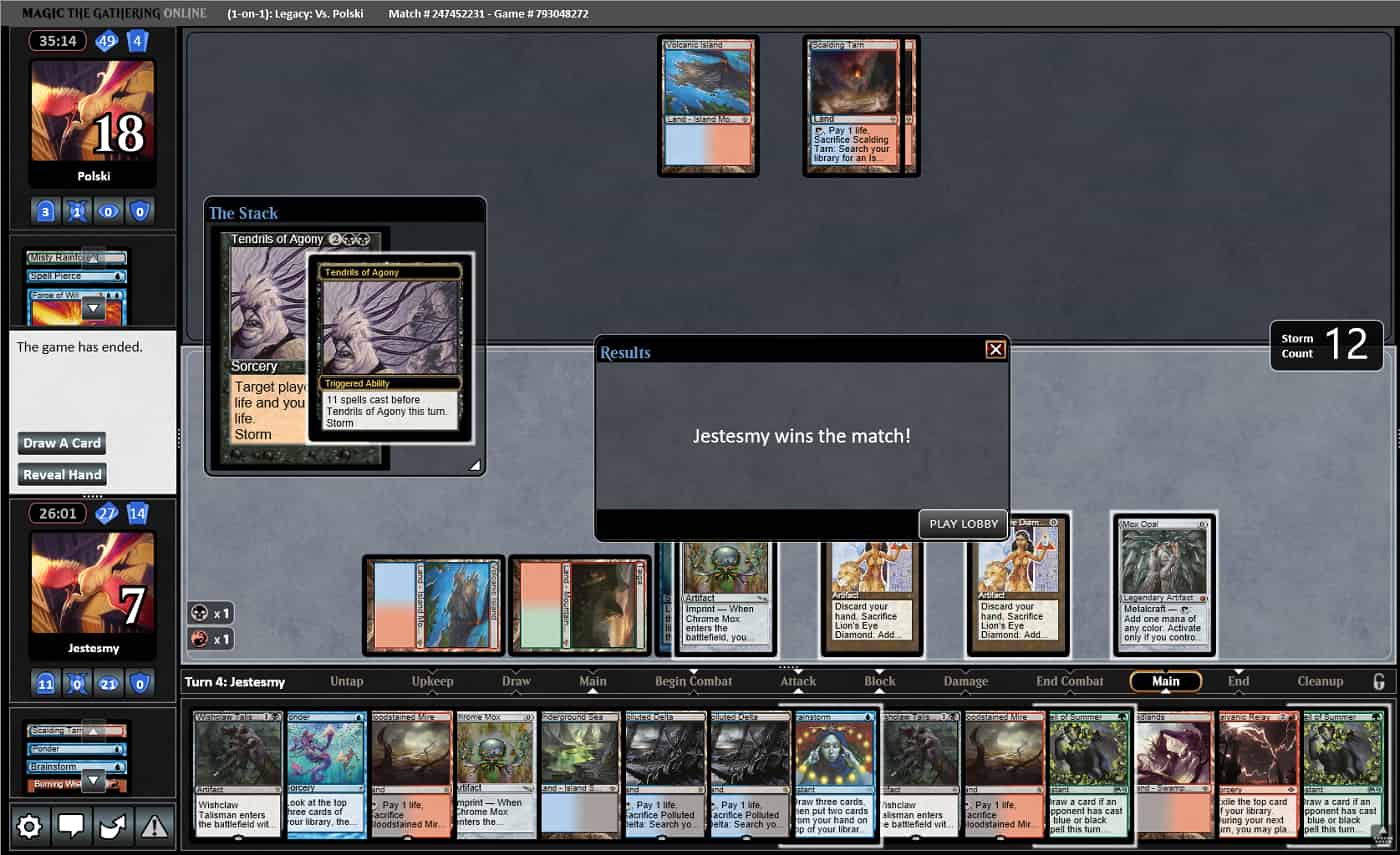 This match went about as I expected. Some games end quickly when either deck executes its combo on turn 1-2 that the other player can’t interact with. Other games go longer when neither player can combo and both decks spend their turns looking for the missing pieces, while also trying to not lose themselves. That’s exactly what happened in my match. Sneak & Show is a deck that has been popular for a very long time, and continues to be. It’s a deck every Legacy player, regardless of deck they play, should be familiar with and have a game plan against. I think it’s one of TES’s harder matchups, so it’s even more important for us to be constantly playtesting and analyzing the matchup. I hope you enjoyed this article, can take some of the lessons learned, and apply them to your own playtesting.