The EPIC Gamble is virtually a mono-red Storm deck. The only non-red card in the main deck is [[Echo of Eons]] and some sideboard cards that they can [[Burning Wish]] for. The deck is comprised of rituals, card generation, and tutors. The recipe of a typical storm deck, but the main difference is being mono red, so it has to play some pretty unique cards. The upside to playing The EPIC Gamble over other storm combo decks is its ability to combo faster with more turn one potential. It also leans into [[Galvanic Relay]] really well to play through counterspells, similar to the direction TES has been moving towards. The EPIC Gamble is a fairly new Storm variant and still being worked on, but it has been quite popular, so it’s a matchup we should be prepared for.

How does The EPIC Gamble matchup against TES?

[[Galvanic Relay]] – This is another payoff and way to continue comboing. Like with TES, it is a great way to generate more cards and fight through counterspells, but the downside is it requires passing the turn and trying to win on the next turn. This isn’t something either TES or The EPIC Gamble want to be doing in this matchup so neither deck will want to rely on it being as a good engine here.

The game plan of winning this matchup is very simple, be the faster deck. The only interaction and protection in both TES and The EPIC Gamble for the first game is [[Veil of Summer]] and [[Defense Grid]]. These are pretty irrelevant in the matchup, so it’s down to just who combos the quickest. Both of these decks are [[Echo of Eons]] decks and can win on the same turn it is cast. A big part of this matchup is the opening hand. There is a smaller percentage of keepable hands in this matchup than other matchups. If the opening hand doesn’t have the potential to combo on the first or second turn, it is a mulligan. There is no flexibility in this as The EPIC Gamble will be using that same logic in hands they keep. If either player gets a bad seven cards off casting an [[Echo of Eons]] and have to pass the turn, there is a high likelihood of losing to the other combo deck. This is similar to why [[Galvanic Relay]] isn’t that good. A combo that requires passing the turn will most likely not be good enough to win the game.

This matchup is a pure race. Trying to win by storming into a [[Galvanic Relay]] to pass the turn is too risky in this matchup. More than likely, we wouldn’t get another turn. That makes [[Galvanic Relay]] an easy cut. [[Veil of Summer]] does protect against [[Tendrils of Agony]], but The EPIC Gamble can generate enough storm to win with [[Grapeshot]] and any competent pilot will be aware our only way to prevent their combo is [[Veil of Summer]], so they will play around it. [[Opposition Agent]], [[Crash]], [[Chain of Vapor]], and [[Thoughtseize]] aren’t that great in the matchup, but they’re better than what we are taking out and have some disruptive elements to them.

Unfortunately I was on the draw for game one. That’s not where we want to be in a matchup decided by who combos first. I kept my seven cards, and my opponent mulliganed down to six. My opponent played their land, [[Mox Opal]], and [[Grim Monolith]] to cast a [[Galvanic Relay]] with the help of [[Simian Spirit Guide]] for three storm. It only revealed two lands and another [[Grim Monolith]]. I kept the perfect hand for this matchup, all mana and a [[Burning Wish]]. Hands that can combo on the first turn is exactly what we are looking for. On my first turn, I drew a [[Lotus Petal]] and was ready to go. The drawn [[Lotus Petal]] gave me the exact amount of mana to [[Burning Wish]] for [[Peer into the Abyss]]. 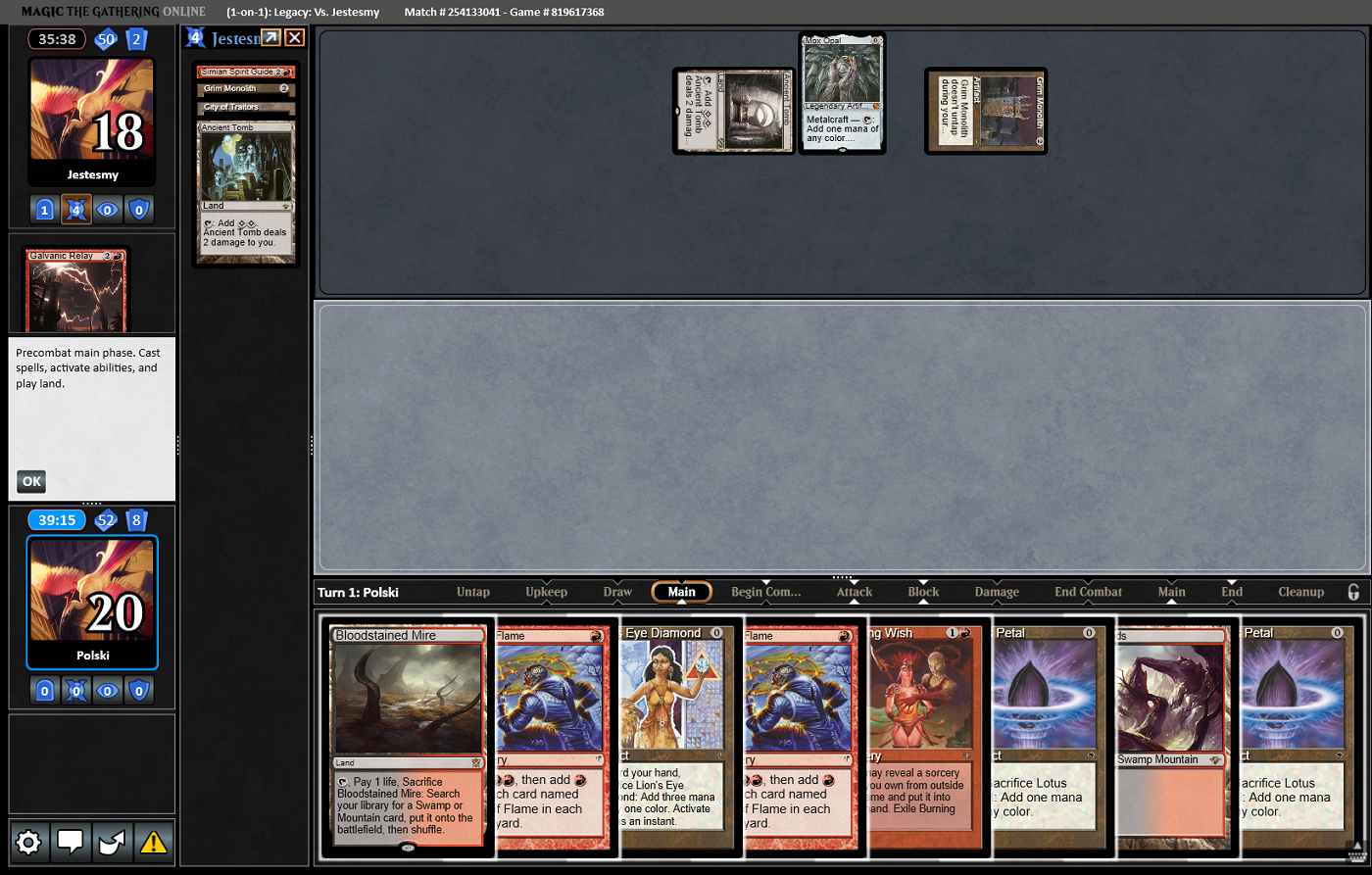 [[Peer into the Abyss]] drew enough zero mana artifacts to continue storming and [[Burning Wish]] for [[Tendrils of Agony]]. 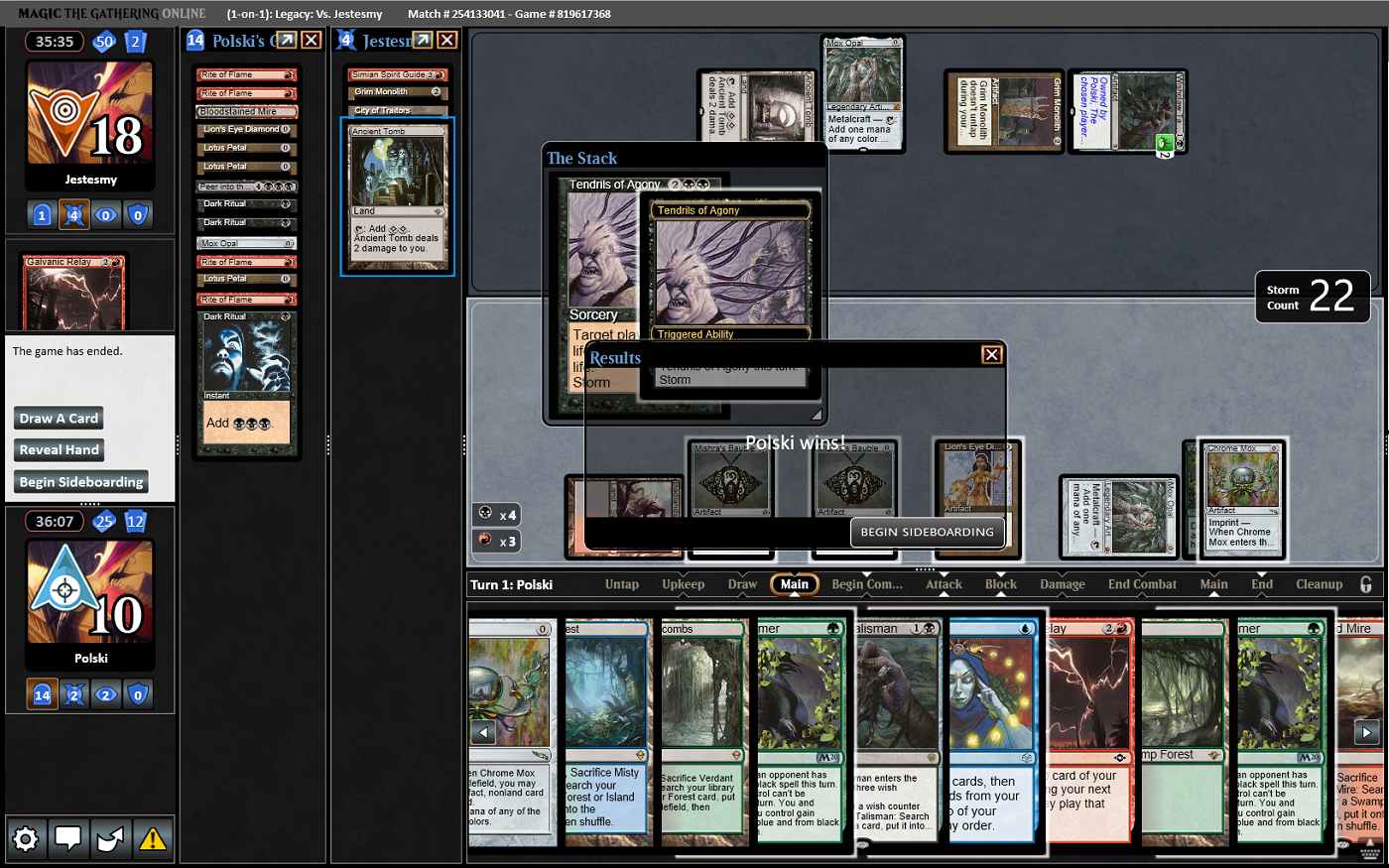 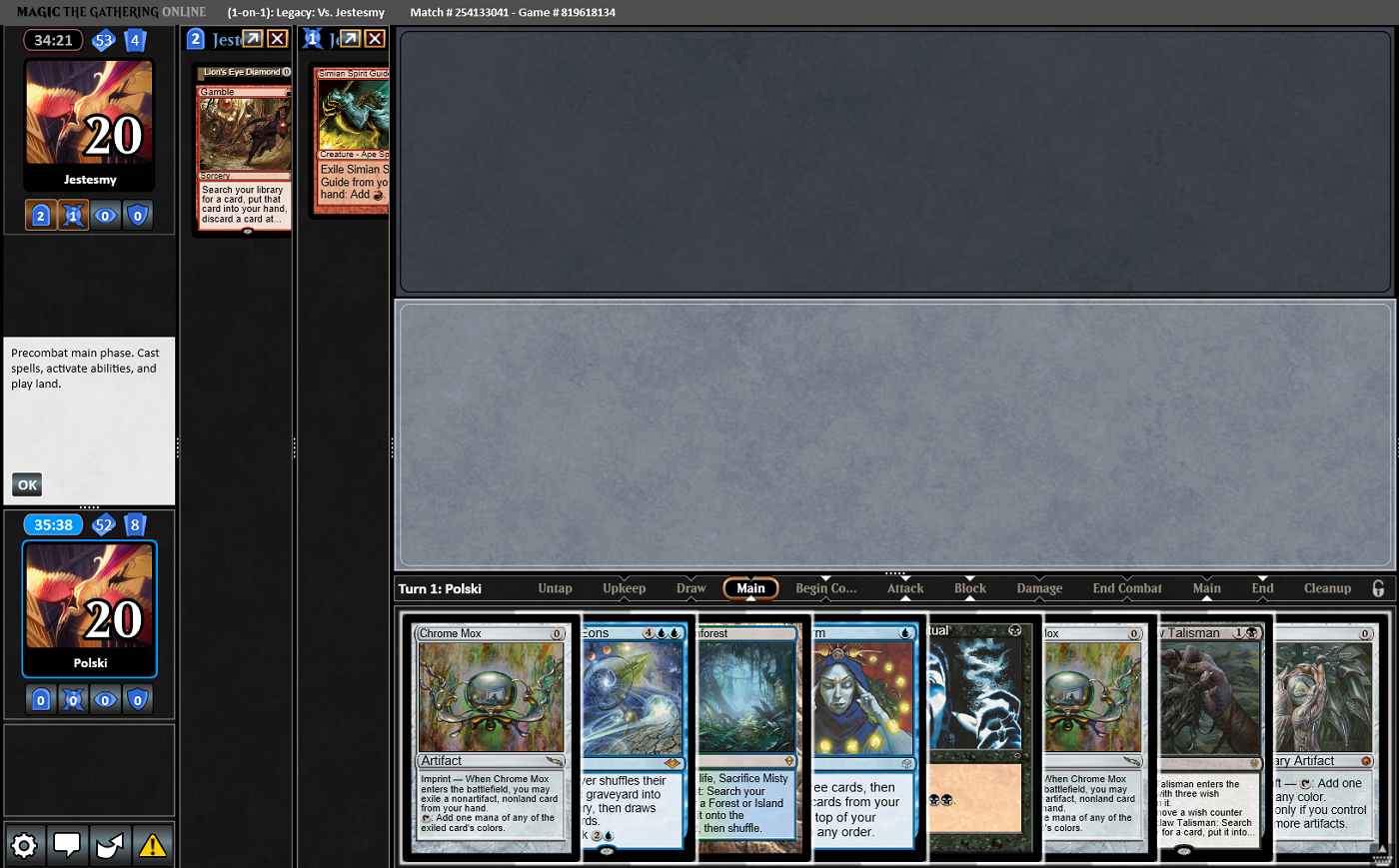 I drew lots of mana, but I didn’t have Metalcraft in play so I couldn’t play and use the copies of [[Mox Opal]] since I would only have two artifacts. In order to get Metalcraft, I needed to play out the [[Wishclaw Talisman]]. I decided to do that with the black mana I had floating and the [[Chrome Mox]]. This gave me the third artifact to play and use both copies of [[Mox Opal]] in hand. Those two in combination with the [[Rite of Flame]] gave me three mana. I decided to use one to activate [[Wishclaw Talisman]] and search for [[Lion’s Eye Diamond]]. The last two remaining mana I cast [[Burning Wish]] for [[Echo of Eons]] again for another set of seven cards. 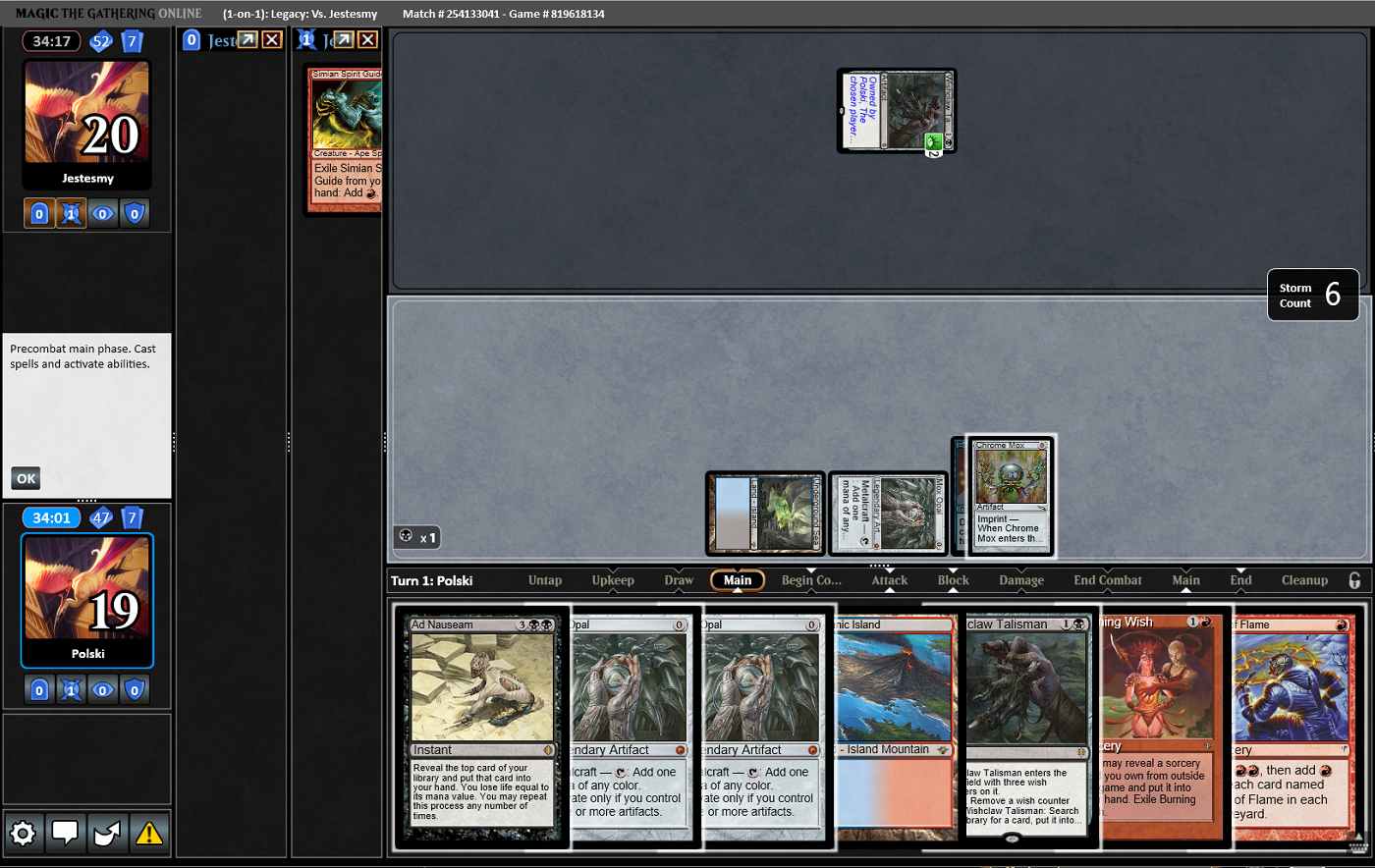 The next set of seven cards was not very good. I couldn’t cast anything. I even drew the [[Opposition Agent]] for the two copies of [[Wishclaw Talisman]] I gave the opponent, but I couldn’t cast it. 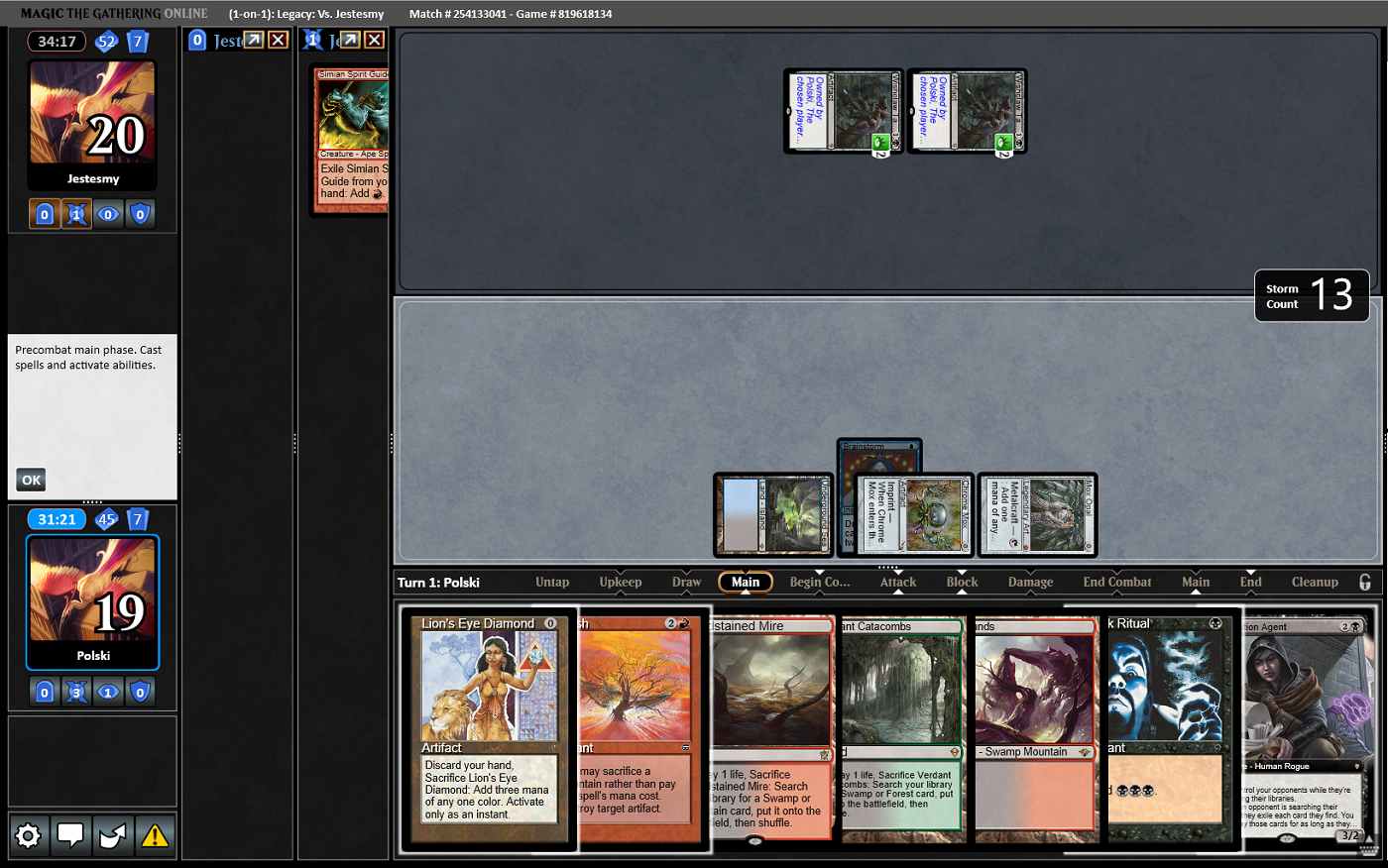 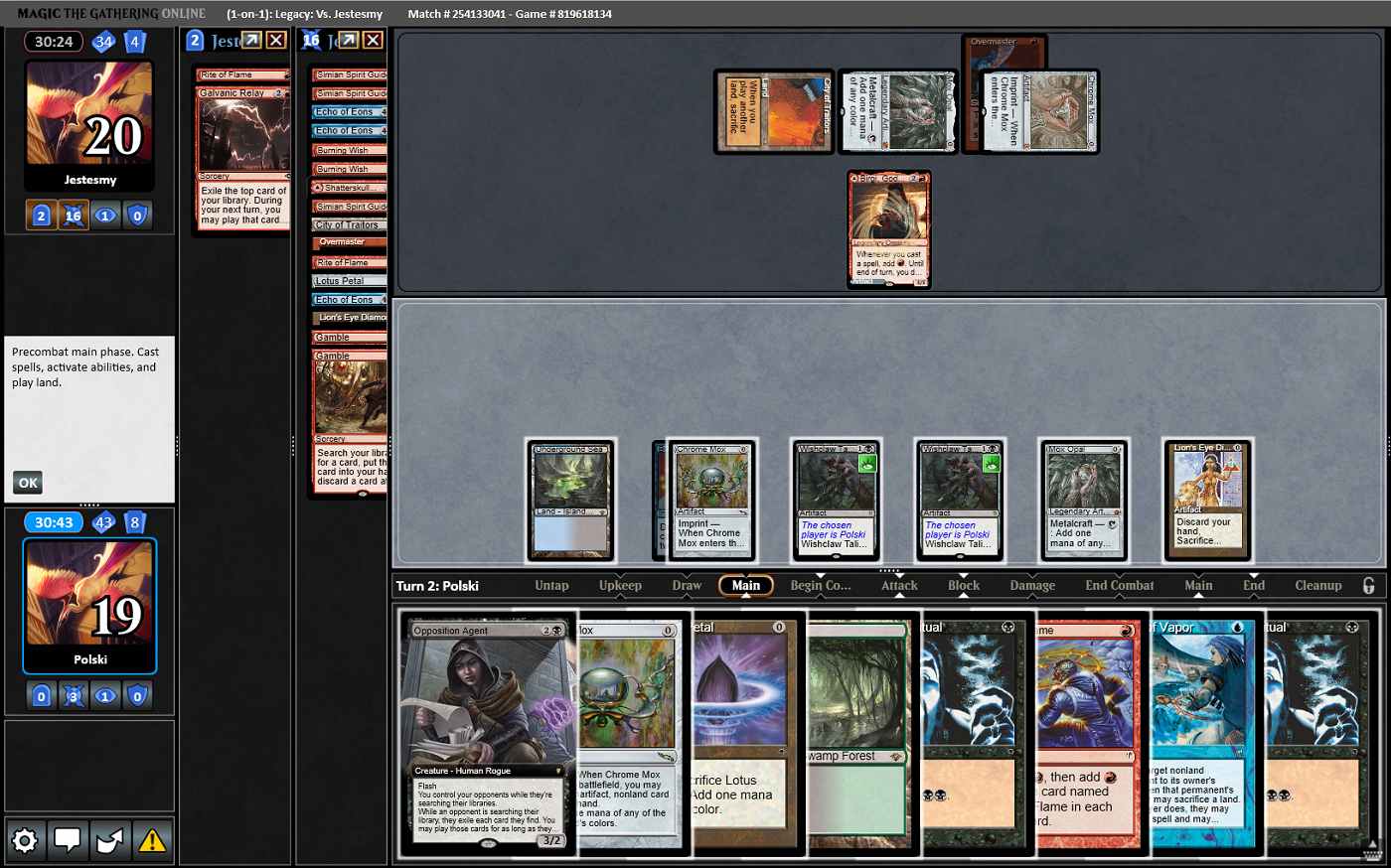 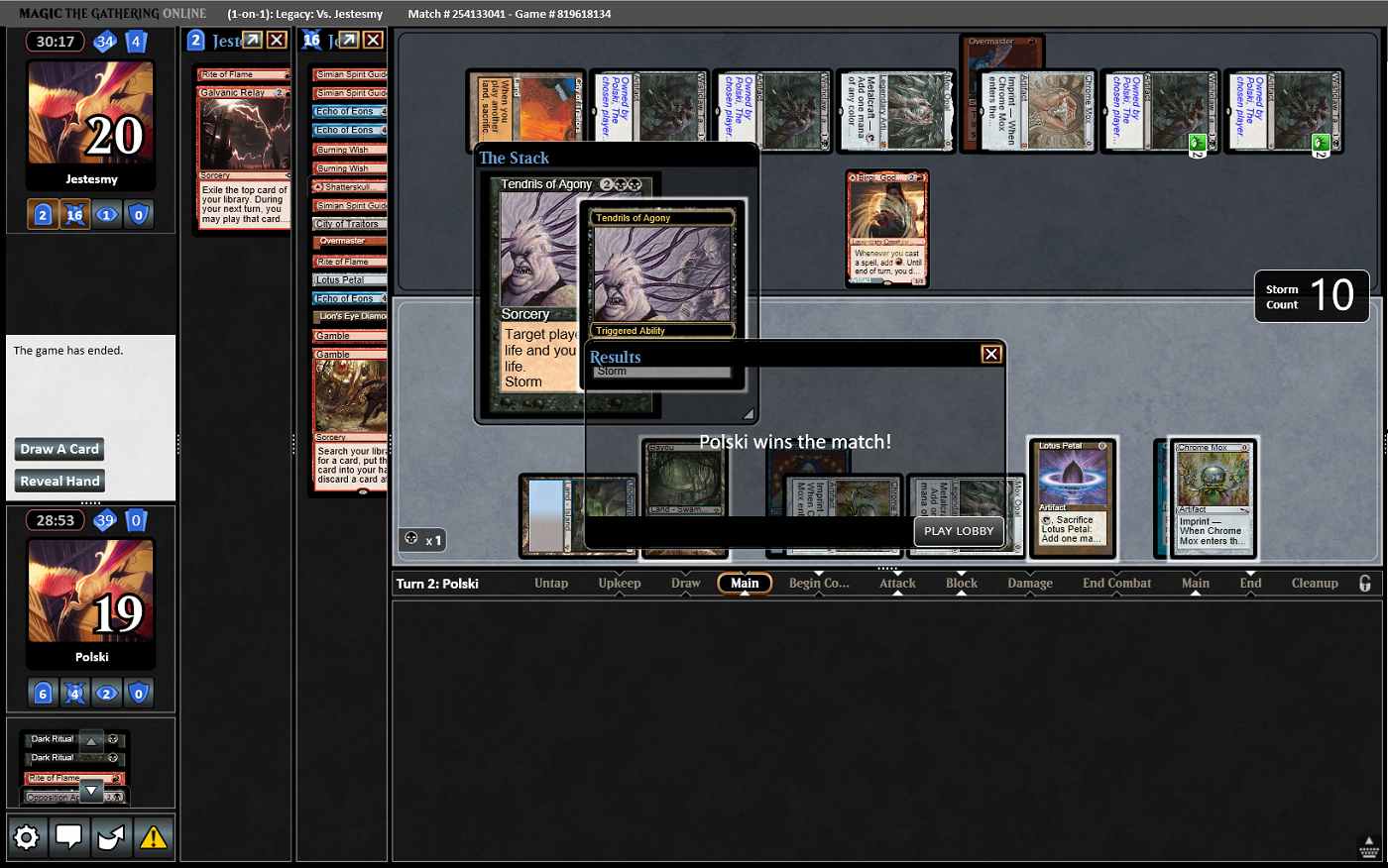 
I got really lucky to win the games I played. The games can have a ton of variance in them with both decks playing [[Echo of Eons]] and The EPIC Gamble playing [[Gamble]]. Either deck can have a dominate game since there’s very little disruption from the opponent. The matchup is just two decks doing their own thing and ignoring the other. This can create either a really fun game of being able to combo freely or a very frustrating game as you sit and watch your opponent combo knowing there’s nothing to do about it. Either way, The EPIC Gamble is a great deck, and one I enjoy having in the Legacy metagame. I hope you enjoyed this article, can take some of the lessons learned, and apply them to your own playtesting.