UG Omni-Tell is a blue-based combo deck that utilizes [[Show and Tell]] and [[Eureka]] to put expensive permanents like [[Omniscience]], [[Griselbrand]], and [[Emrakul, the Aeons Torn]] into play in order to win the game. With the recent printings of [[Uro, Titan of Nature’s Wrath]], [[Ice-Fang Coatl]], and [[Veil of Summer]], the deck now tends lean on green instead of the usual red for [[Sneak Attack]]. We may have some experience playing against UR [[Sneak Attack]], but it will be important to know how TES line up against this UG Omni-Tell variant as it increases in popularity.

How does UG Omni-Tell matchup against TES?

[[Show and Tell]], [[Eureka]], [[Omniscience]], [[Emrakul, the Aeons Torn]] – These are the cards that allow the opponent to combo. This is achieved by casting [[Show and Tell]] or [[Eureka]] to put cards like [[Omniscience]], [[Griselbrand]], or [[Emrakul, the Aeons Torn]] into play. With one of these creatures in play, it is pretty easy to win the game.

[[Veil of Summer]], [[Force of Will]] – Counter magic is important to [[Show and Tell]]’s game plan and overall success. Not many combo decks in Legacy play counterspells. We usually see discard spells in Storm, Dredge, and Reanimator. Counterspells aren’t necessarily better than discard spells, but it changes the way in which you play. When all you have to play around is discard spells, TES is free to combo off whenever you can. Knowing how to play around counterspells is a skill and involves taking a risk when trying to combo off. Because the opponent doesn’t have to fear a counterspell from TES, it means they are going to combo as early as they can.

[[Uro, Titan of Nature’s Wrath]], [[Ice-Fang Coatl]] – These cards are the main reason for [[Show and Tell]] to start playing green instead of the traditional red that we’re used to seeing. [[Uro, Titan of Nature’s Wrath]] and [[Ice-Fang Coatl]] are great at combating opposing fair decks such as [[Delver of Secrets]]. These don’t really play much of a role against TES.

We can easily win a lot of games on the first or second turn if we know the opponent is lacking a counterspell, then that probably isn’t the best way to approach this matchup. The opponent has a lot of free and very cheap interaction that can stop us during our combo turn. This is why the fundamental turns of this matchup are generally going to be turns 2-4. I do find it more intriguing to go for the kill on turn one, however, because it forces them to have exactly [[Force of Will]]. After that, the deck has access to cards like [[Spell Pierce]], [[Veil of Summer]], or a cantrip to find [[Force of Will]]. Attempting to combo quickly allows us to try and win with a [[Defense Grid]] in play or a [[Veil of Summer]] as protection. It’s also fast enough so they don’t get the opportunity for their turn-three [[Show and Tell]]. If we try and combo off too soon, we could run right into a counterspell and lose. Conversely, if we wait too long, we can just lose to a [[Show and Tell]]. The opponent doesn’t have this fear and can just go for their combo as soon as they assemble it because we don’t have any counters to disrupt it.

There isn’t much to change in this matchup. We bring in [[Pyroblast]] because it stops their [[Show and Tell]] and protects us against their counterspells. We remove the [[Swamp]] because the basic land isn’t that important in this matchup. We don’t have to worry about [[Wasteland]] and the games are often very fast.

For game one, I won the die role and was on the play. On my second turn, I cast [[Brainstorm]]. My hand was pretty good, and I put back a [[Lotus Petal]] and a [[Ponder]] because I had enough mana and the necessary cards to combo off on the following turn. After that resolved, I just played my second land and passed the turn hoping to win on my third turn. This would allow me to win before the opponent’s third turn so they can’t cast [[Show and Tell]]. 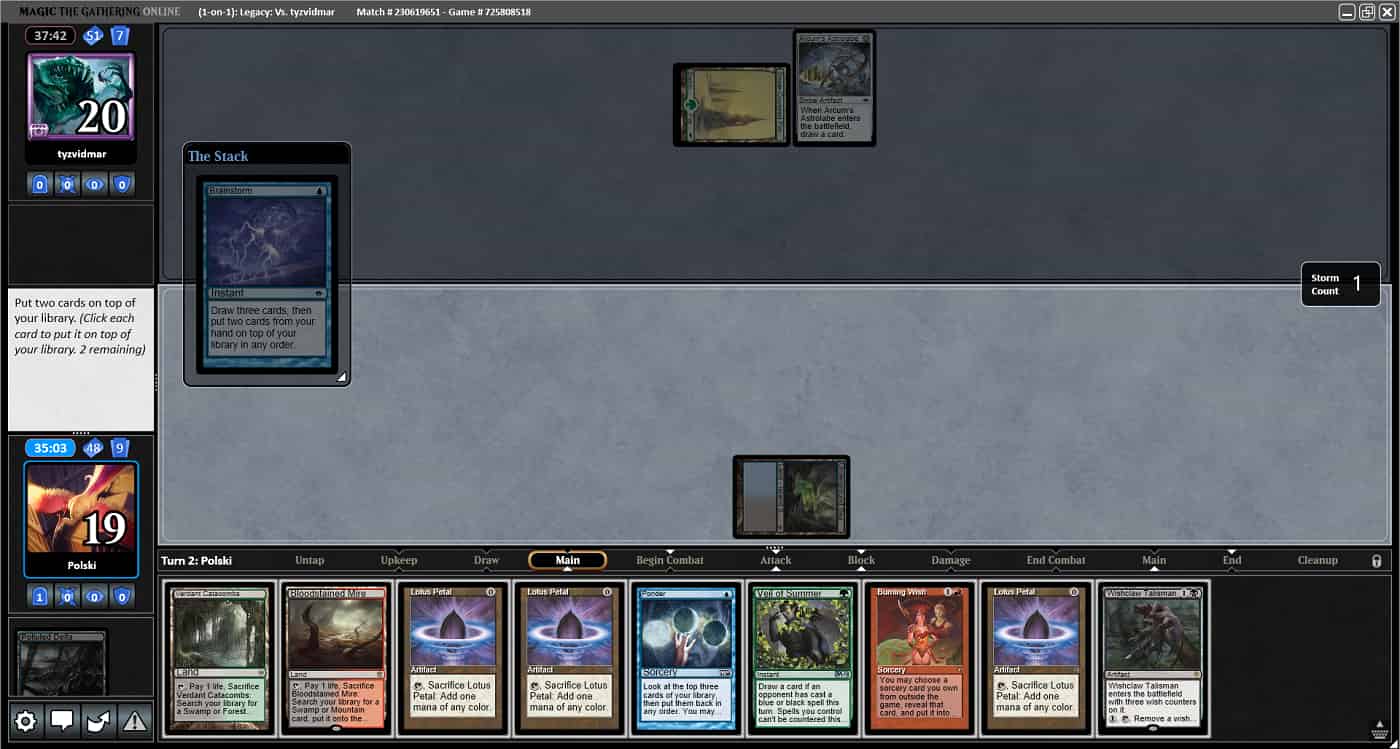 On my third turn, I played my third land and cast [[Wishclaw Talisman]]. It was met with a [[Spell Pierce]] and I was able to protect it with [[Veil of Summer]]. The opponent then casts their own [[Veil of Summer]]. My [[Wishclaw Talisman]] still resolves because it can’t be countered, but the opponent now has hexproof. I couldn’t combo off from there, so I passed the turn back. 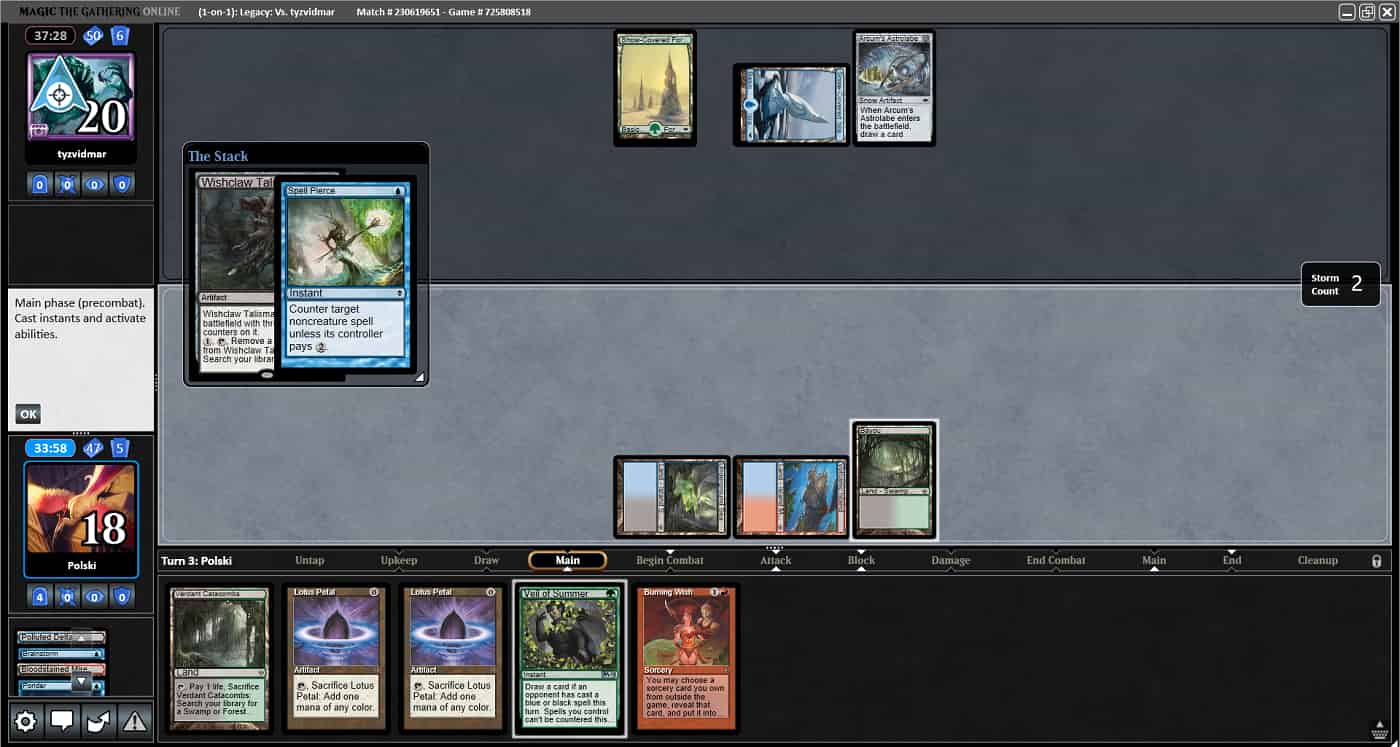 On the opponent’s third turn, they just cast two cantrips and passed the turn leaving one mana untapped. During my third turn, I used the [[Wishclaw Talisman]] to search for [[Lion’s Eye Diamond]]. I could then [[Burning Wish]] for [[Echo of Eons]]. I played out the two copies of [[Lotus Petal]] and the [[Lion’s Eye Diamond]] and immediately sacrificed it to flashback the [[Echo of Eons]]. In response, my opponent cast [[Veil of Summer]] to gain hexproof. My new seven-card hand was all mana and [[Tendrils of Agony]], but that was no good when they have hexproof, so I had to just pass the turn. On my opponent’s next turn, they cast [[Show and Tell]] and put a [[Griselbrand]] into play and immediately drew seven cards. I think they messed up here. They forgot that the [[Wishclaw Talisman]] was now under their control and they could have tutored for [[Omniscience]] and put that into play and probably won the game. 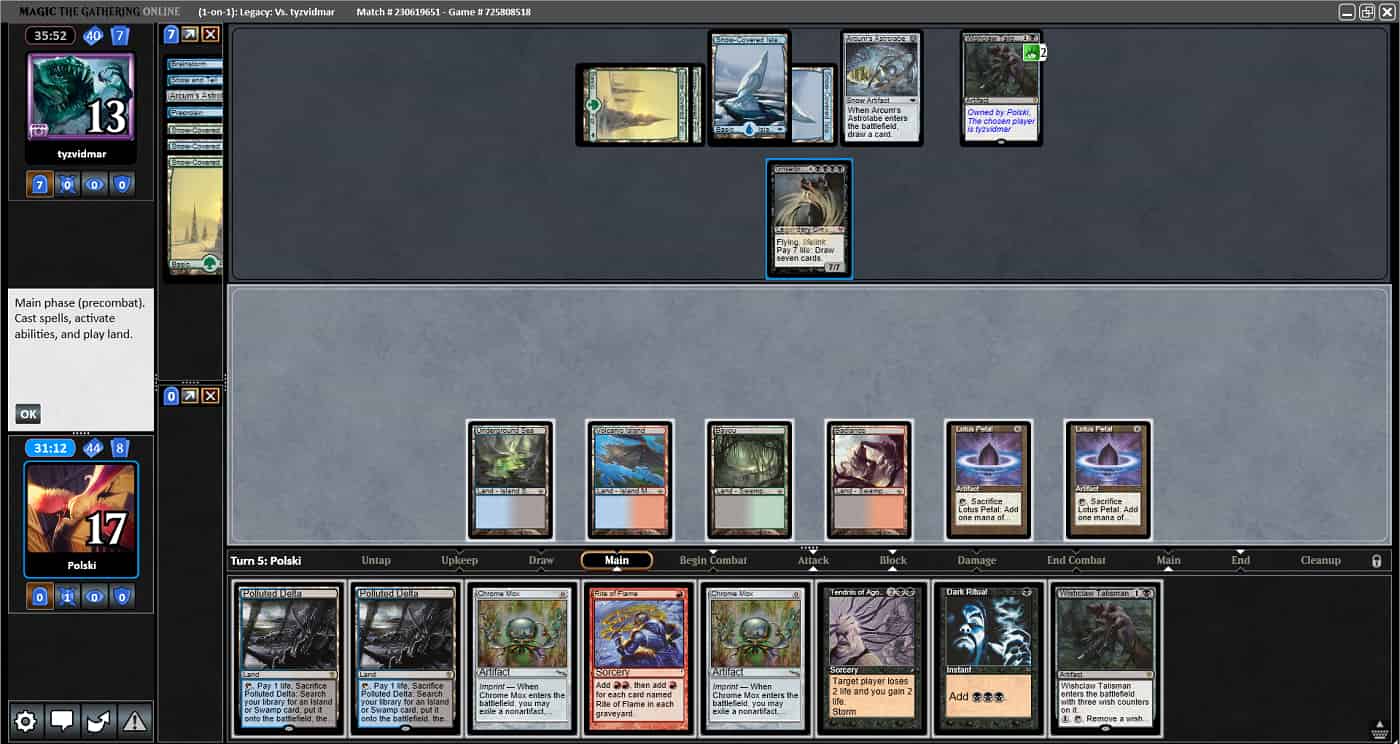 During my next turn, I drew another [[Wishclaw Talisman]]. My plan was to use all of my mana and then [[Wishclaw Talisman]] for [[Ad Nauseam]] and try to win that way. When I went for that line, my opponent drew another seven cards off of [[Griselbrand]]. They then cast [[Spell Pierce]] and forced me to sacrifice both copies of [[Lotus Petal]] in order to pay for it. They were trying to get me to go off without any mana floating, but they didn’t realize I had two copies of [[Chrome Mox]] in hand. 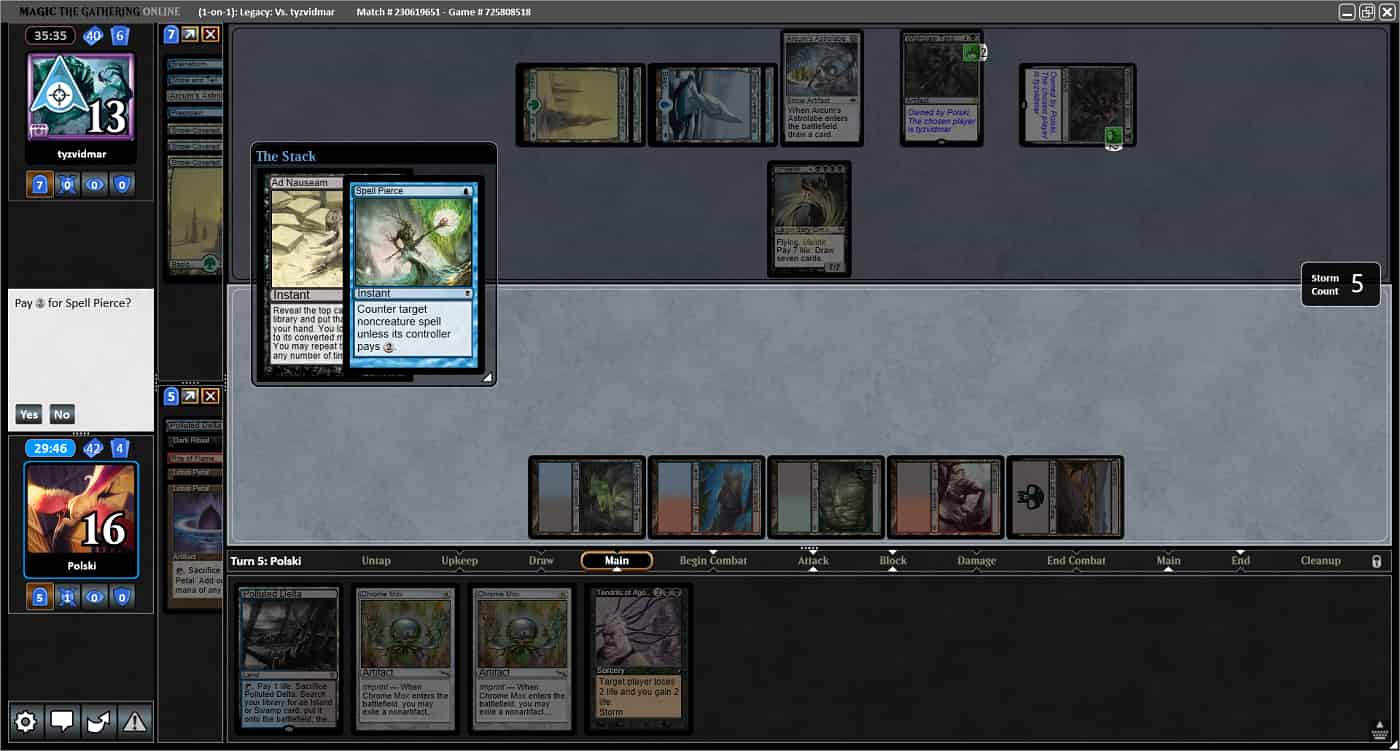 Thankfully, the top of my deck was good enough to win. 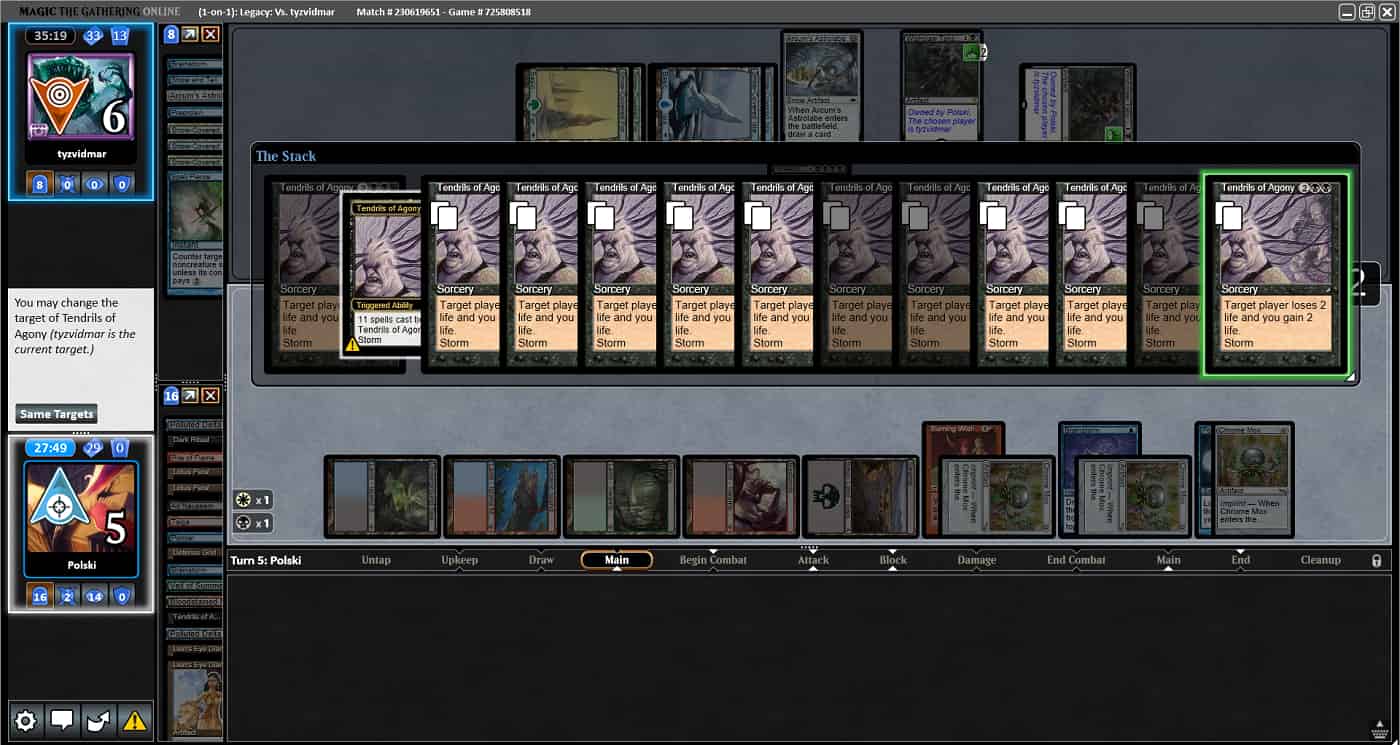 For the second game, I am on the draw and keep my opening seven. I have a turn-one [[Echo of Eons]], but my seven cards after it resolves is one mana short of [[Burning Wish]] for [[Empty the Warrens]]. 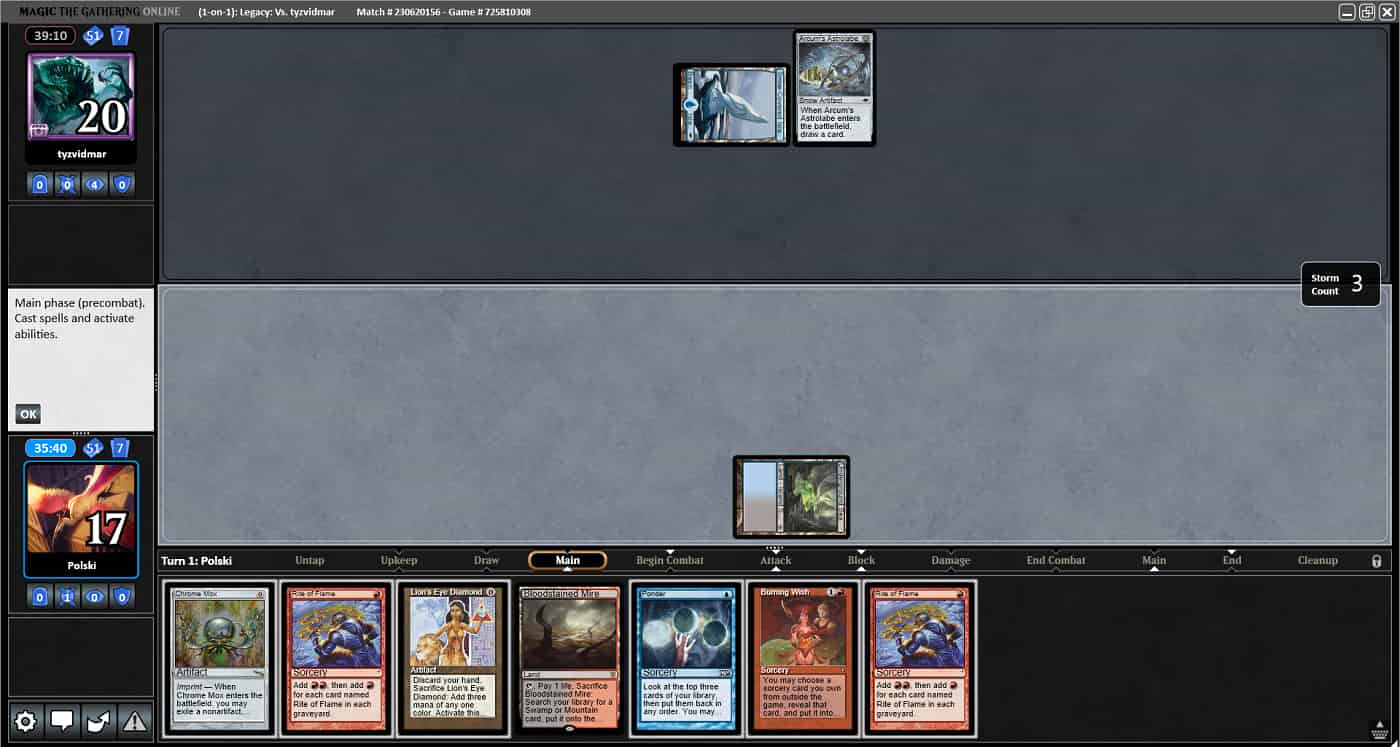 On my second turn, I cast [[Burning Wish]] for another [[Echo of Eons]], and in combination with [[Lion’s Eye Diamond]], I was able to flash it back and cast it. In response, my opponent cast [[Veil of Summer]]. My new seven cards had lots of red mana and a [[Burning Wish]], so I just decided to go for [[Empty the Warrens]] here and hope my opponent can’t win on their next turn. 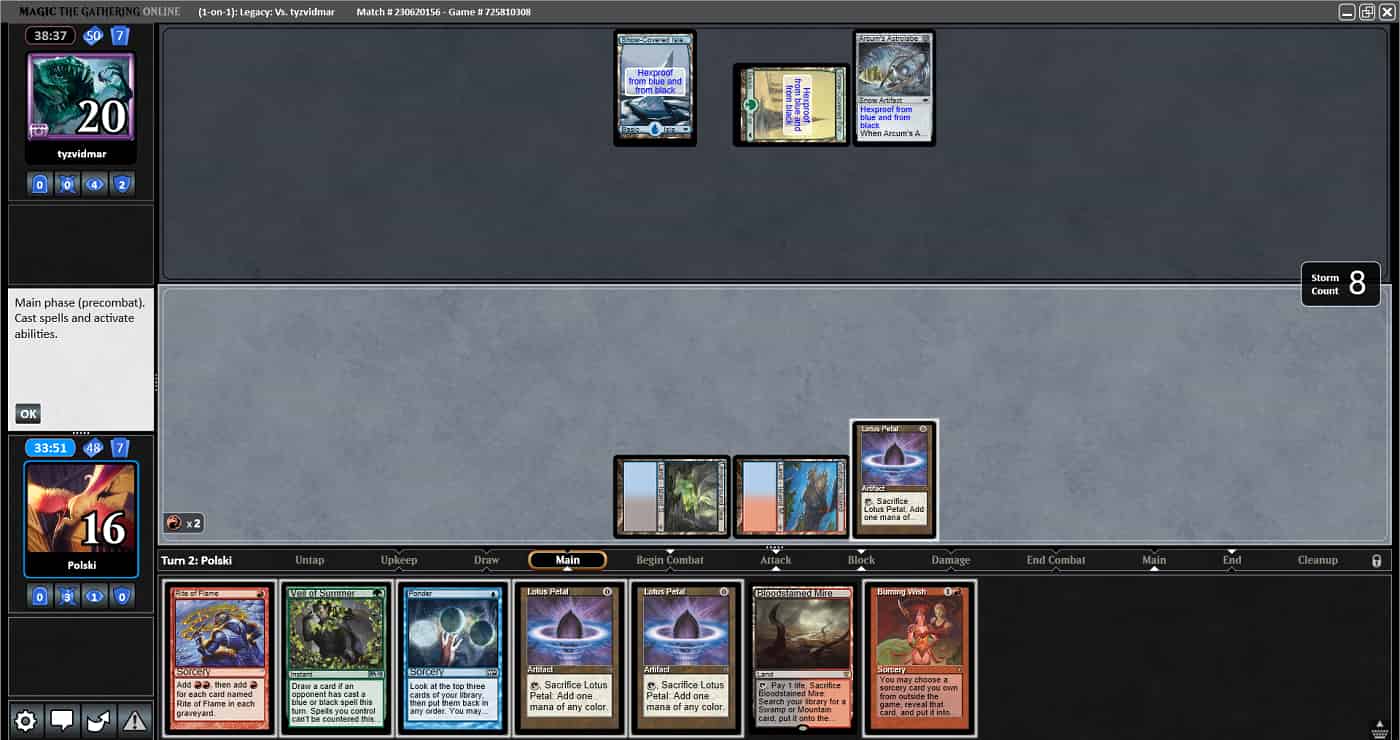 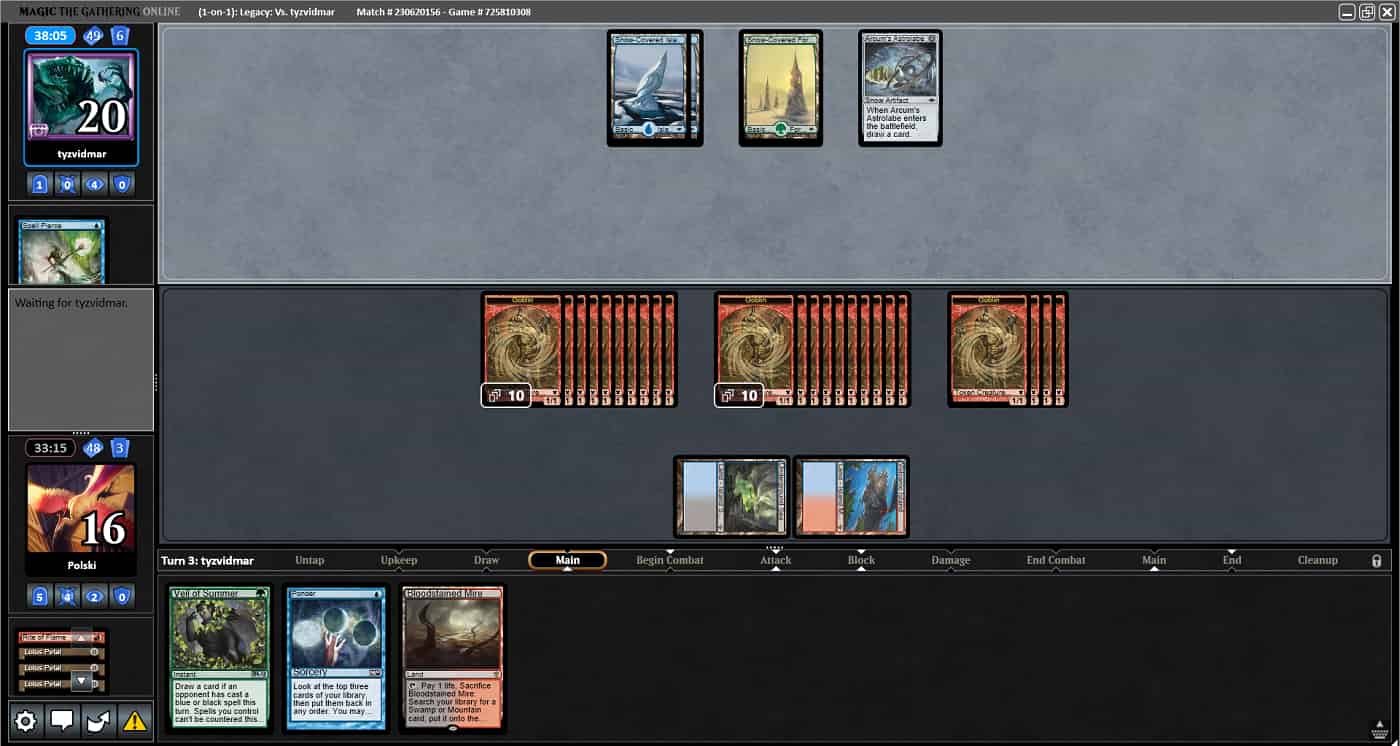 Unfortunately, my opponent’s new seven-card had contained a [[Show and Tell]] and [[Griselbrand]]. The opponent couldn’t draw off [[Griselbrand]] here because that would put them too low on life and lose to the [[Goblin Token]]s. On my next turn, I attacked with 24 goblins and one got blocked, putting the opponent down to four life. 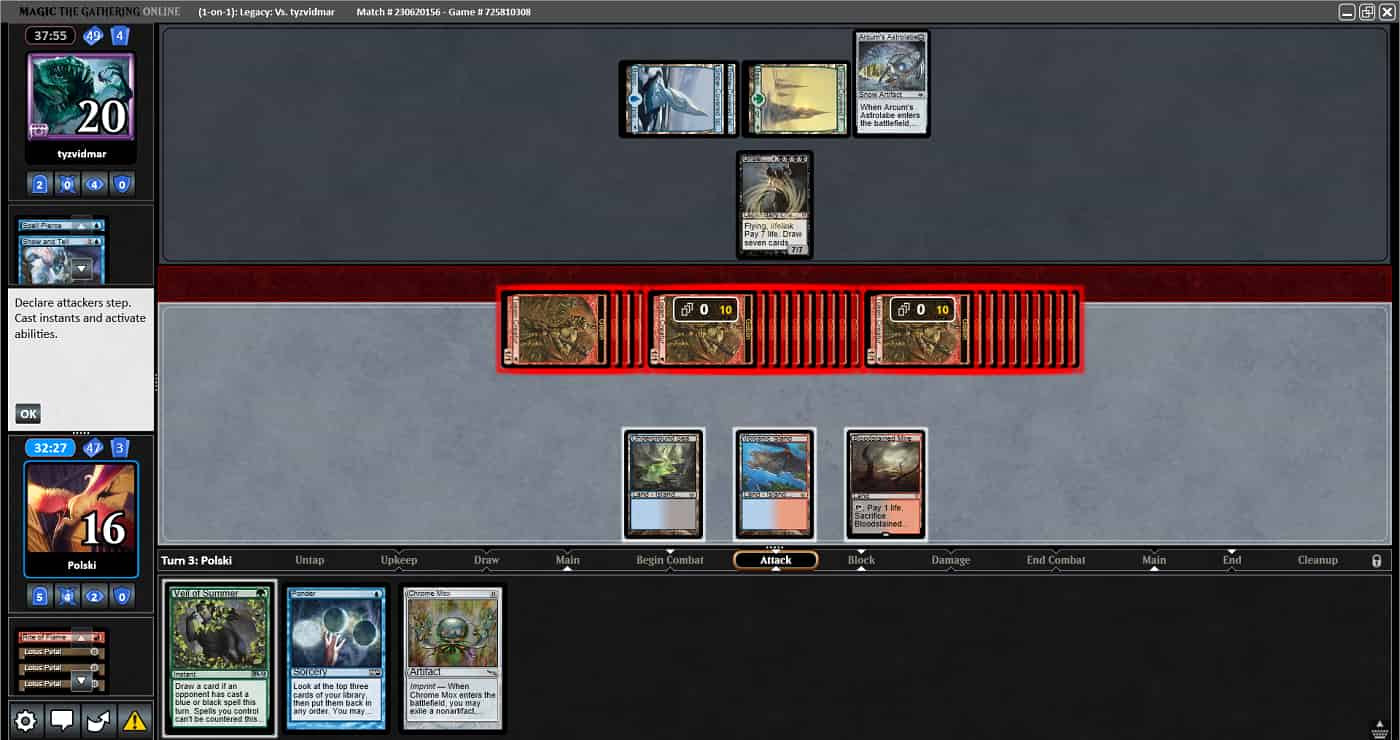 The opponent had to win this turn or else my goblins would win, so they had to attack with [[Griselbrand]] and then draw seven cards to hopefully cast [[Show and Tell]] to put into play [[Omniscience]] and then [[Emrakul, the Aeons Torn]]. This would give them an additional turn to attack me and win the game. They did not draw those cards, and I won! 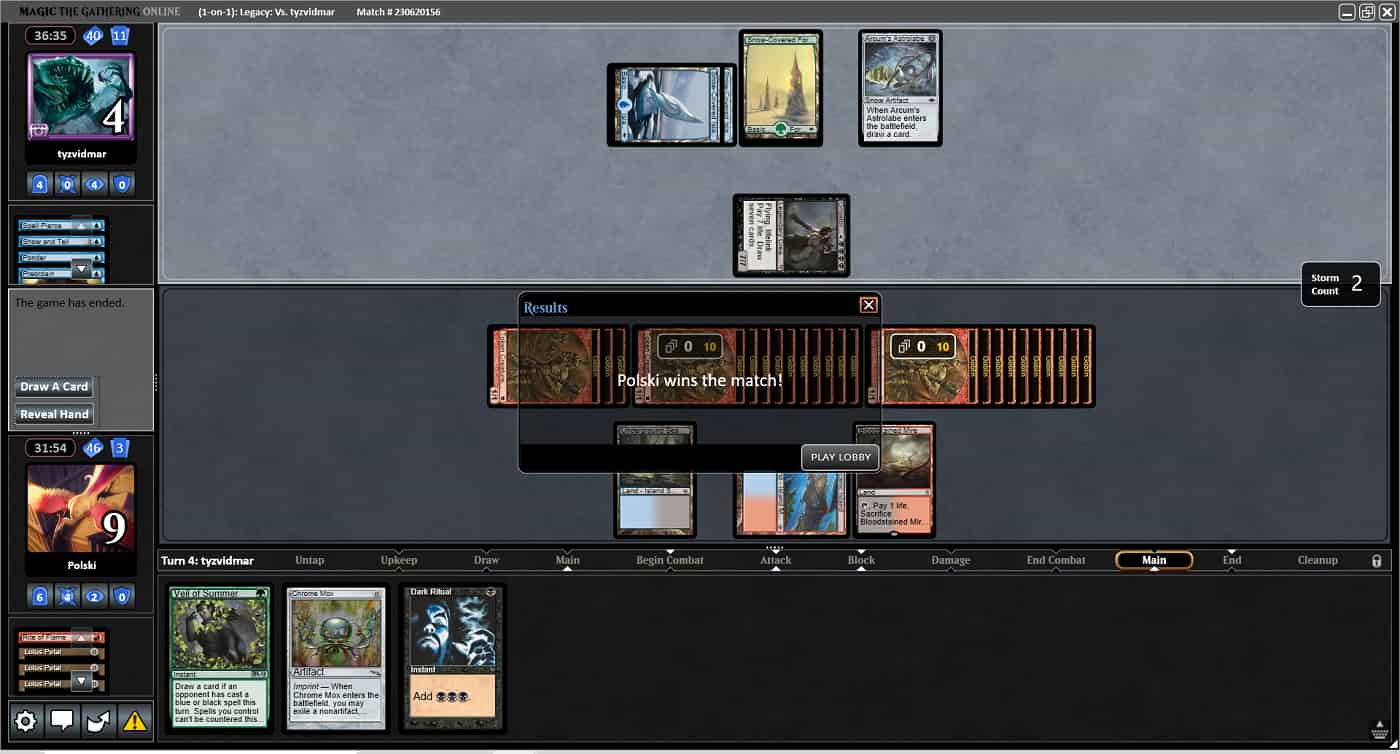 Over the past few years, we have seen many cards printed that are changing Legacy. Lots of new decks being created, different variations of decks, and new cards to enhance existing decks. This is an exciting time for Legacy. We see this with the recent printings of [[Uro, Titan of Nature’s Wrath]], [[Ice-Fang Coatl]], and [[Veil of Summer]] creating a new variation of the [[Show and Tell]] decks. As the Legacy metagame involves, it’s important we keep practicing and understanding our matchups inside and out. I hope you enjoyed this article, and I wish you the best of luck in your own testing!