UR Delver is made up of cantrips, burn spells, aggressive creatures, and counterspells. Its game plan is to try to and play an early aggressive creature and then use counterspells and burn spells to disrupt the opponent enough to end the game quickly. [[Dragon’s Rage Channeler]], [[Ragavan, Nimble Pilferer]], [[Murktide Regent]], and [[Expressive Iteration]] are all exciting new cards that people have been trying in UR Delver. With the increased popularity of UR Delver and these cards, it’s important we are familiar with the matchup.

How does UR Delver matchup against TES?

[[Lightning Bolt]], [[Forked Bolt]] – The deck plays several burn spells that act as both removal for creatures and reducing the opponent’s life total. Burn spells, with the combination of aggressive creatures, is a fast way to win the game, and puts pressure on any combo deck to combo off in the first few turns.

With UR Delver being an aggressive deck it’s important that we focus on speed. We can’t keep a slower hand and rely on several turns to find the cards to combo off. UR Delver also plays several counters, so we can’t play reckless and only focus on speed. It’s a balance between being faster than their creatures, but not too aggressive to run into counterspells. This makes the key turns of the matchup 2-4. This should give us enough time to try and beat any counterspells, but also be fast enough to win before their creatures can.

As far as win conditions go, [[Ad Nauseam]] is not too reliable in most games because our life total will be low and we won’t be able to go below four life to respect a potential [[Lightning Bolt]] if the opponent has red mana available. Using [[Wishclaw Talisman]] and [[Burning Wish]] to try and leverage [[Echo of Eons]] is our best bet at winning.

[[Carpet of Flowers]] is in our sideboard for matchups exactly like these. UR Delver tries to win with narrow margins with cards like [[Wasteland]], [[Daze]], and [[Spell Pierce]]. [[Carpet of Flowers]] provides us the extra mana to try and play through these cards and really invalidate a lot of the ways that UR Delver tries to interact. With a [[Carpet of Flowers]] in play, the opponent also may play the game slower by not sacrificing fetch lands. The longer the game goes, the more it favors TES. Removing a cope of [[Chrome Mox]] and [[Mox Opal]] is an easy substitute since they play similar roles and it’s just an upgrade. There is also a chance the opponent could have [[Null Rod]] so this sideboarding plan hedges against that.

To start the first game, I was on the play and we both kept our seven card hands. My opening hand had lots of mana, a [[Veil of Summer]], for protection, and cantrips to find a tutor. This was a good hand, so I led off with [[Ponder]] and saw [[Burning Wish]], [[Chrome Mox]], and [[Wishclaw Talisman]]. This was exactly what I needed to combo off on turn two with [[Veil of Summer]] for protection. I didn’t shuffle and drew the [[Chrome Mox]], leaving the [[Wishclaw Talisman]] on top of my library. 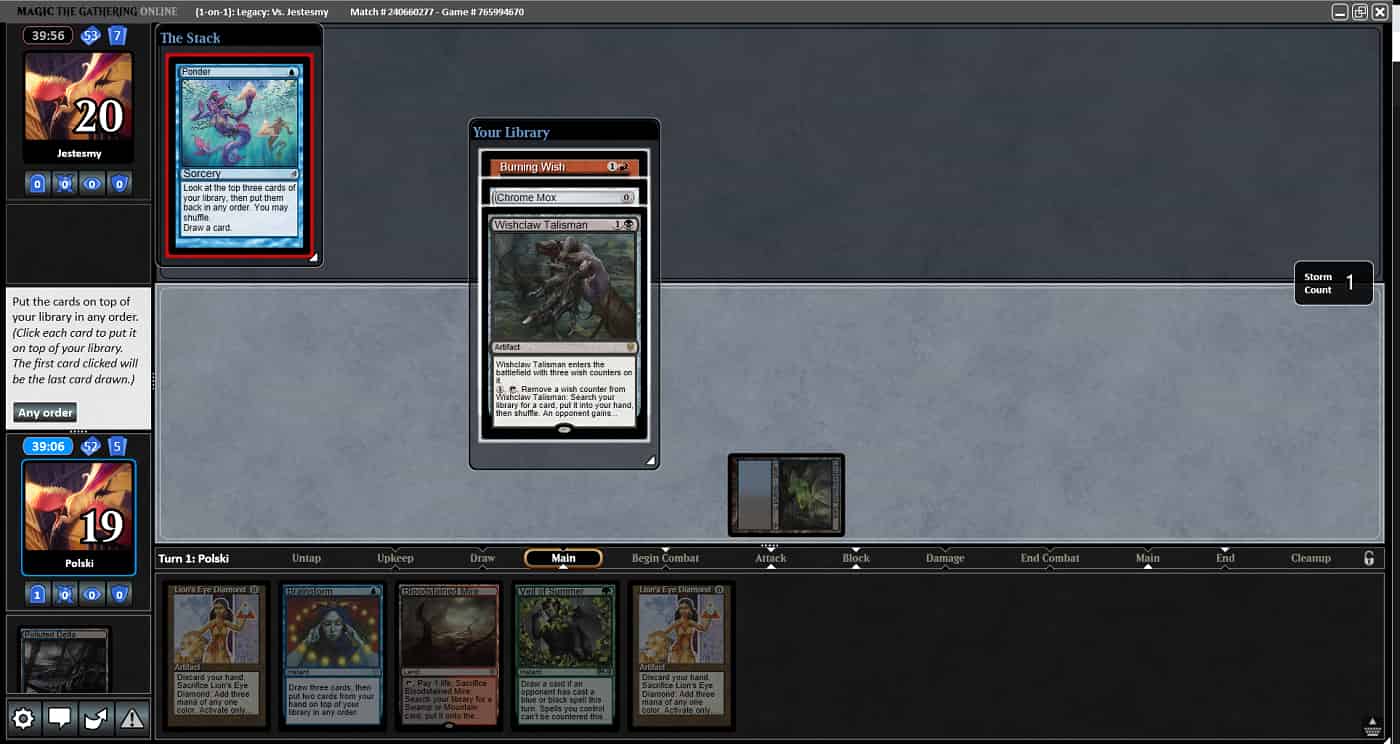 My opponent used their first turn to just play a [[Delver of Secrets]]. On my second turn, I drew the [[Wishclaw Talisman]]. I played out the [[Bloodstained Mire]] and searched for [[Taiga]] and cast the [[Chrome Mox]], imprinting [[Brainstorm]]. 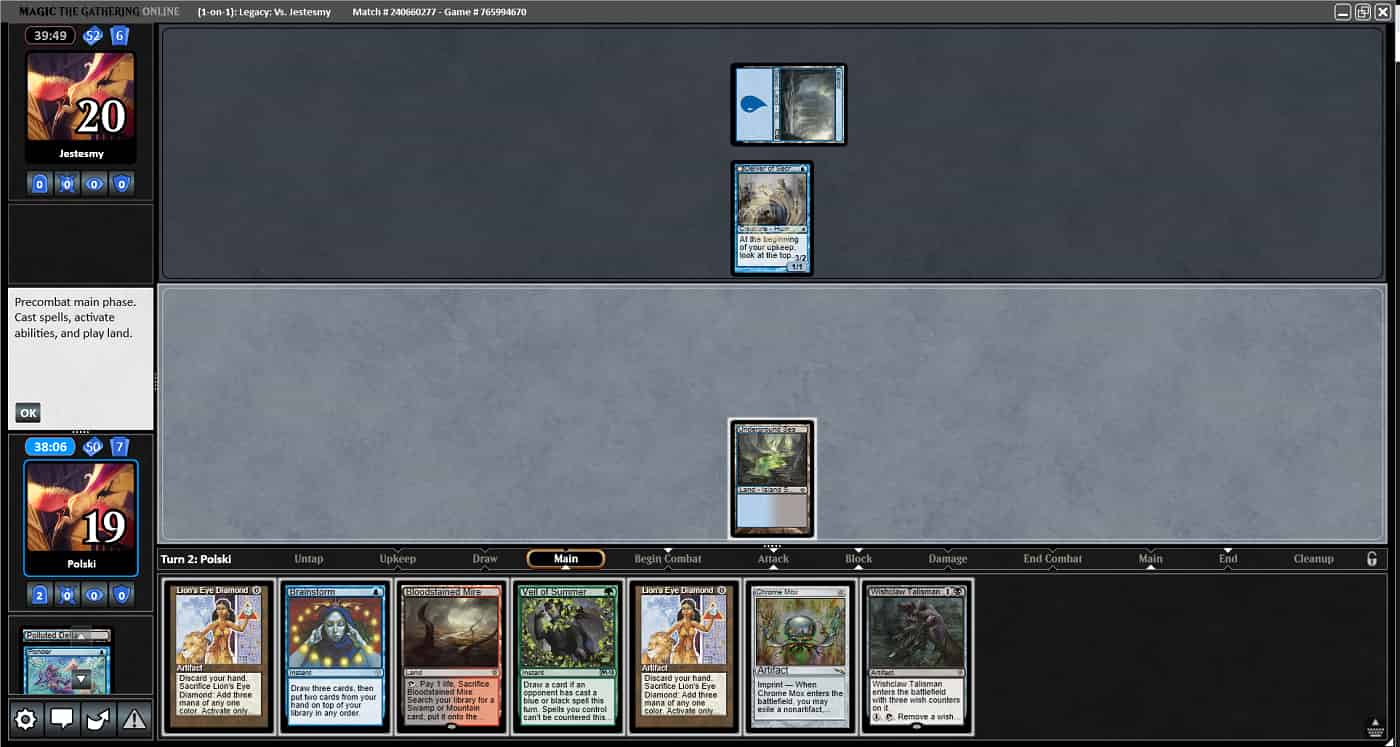 I then cast the [[Veil of Summer]] to make the opponent us a [[Force of Will]] or [[Force of Negation]] if they have one. The opponent let it resolve, and I was free to combo this turn. I tapped both lands to cast [[Wishclaw Talisman]] and both copies of [[Lion’s Eye Diamond]]. 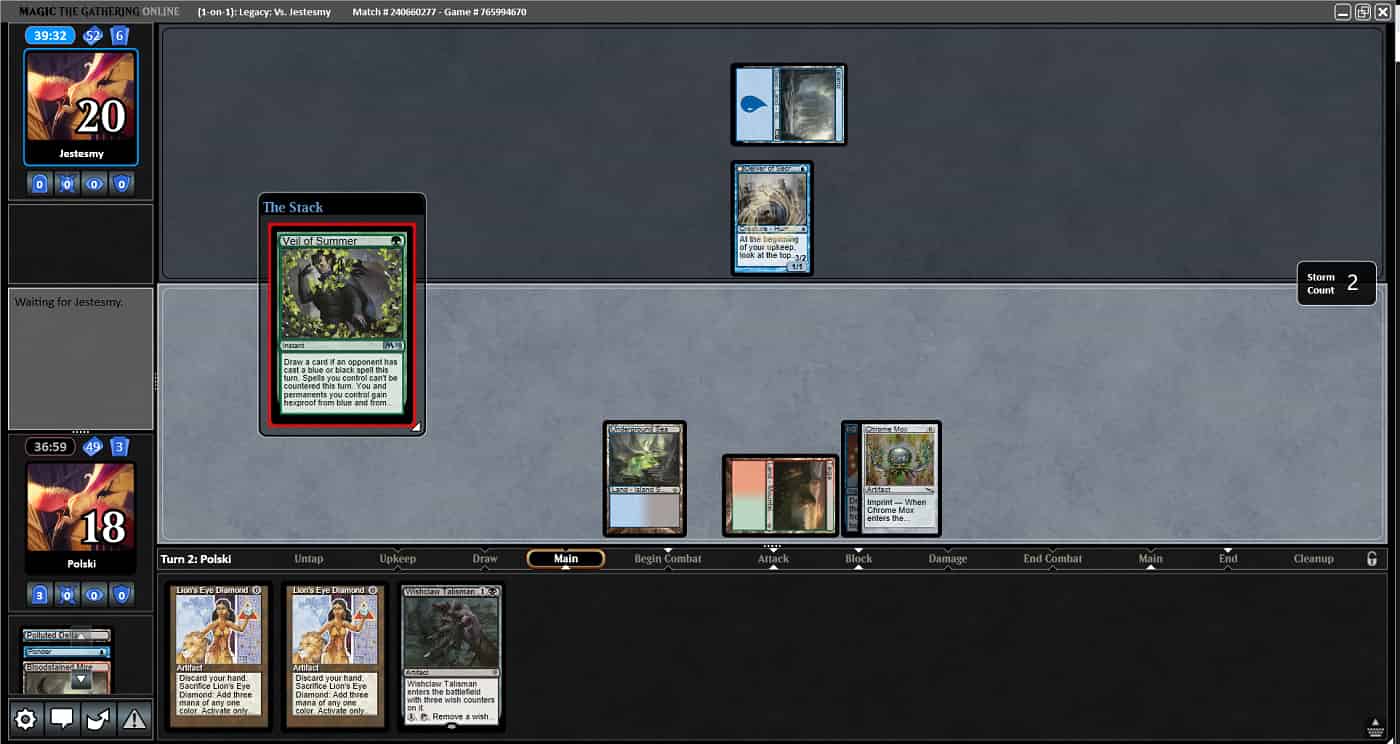 Having no cards left in hand, I sacrificed both copies of [[Lion’s Eye Diamond]] for six black mana and used it all to activate [[Wishclaw Talisman]] and search for and cast [[Ad Nauseam]]. I revealed enough cards to take me down to four life, and had enough mana and a [[Burning Wish]] to win the game with [[Tendrils of Agony]]. 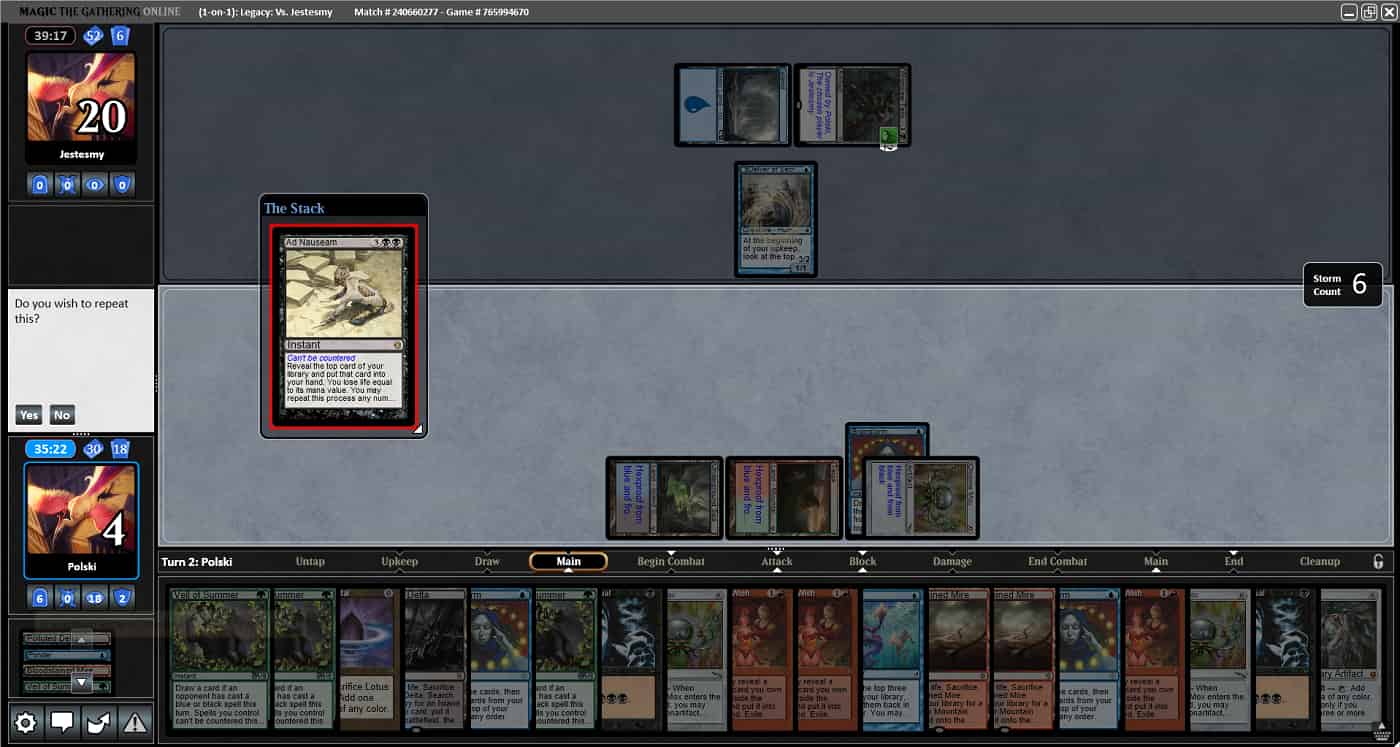 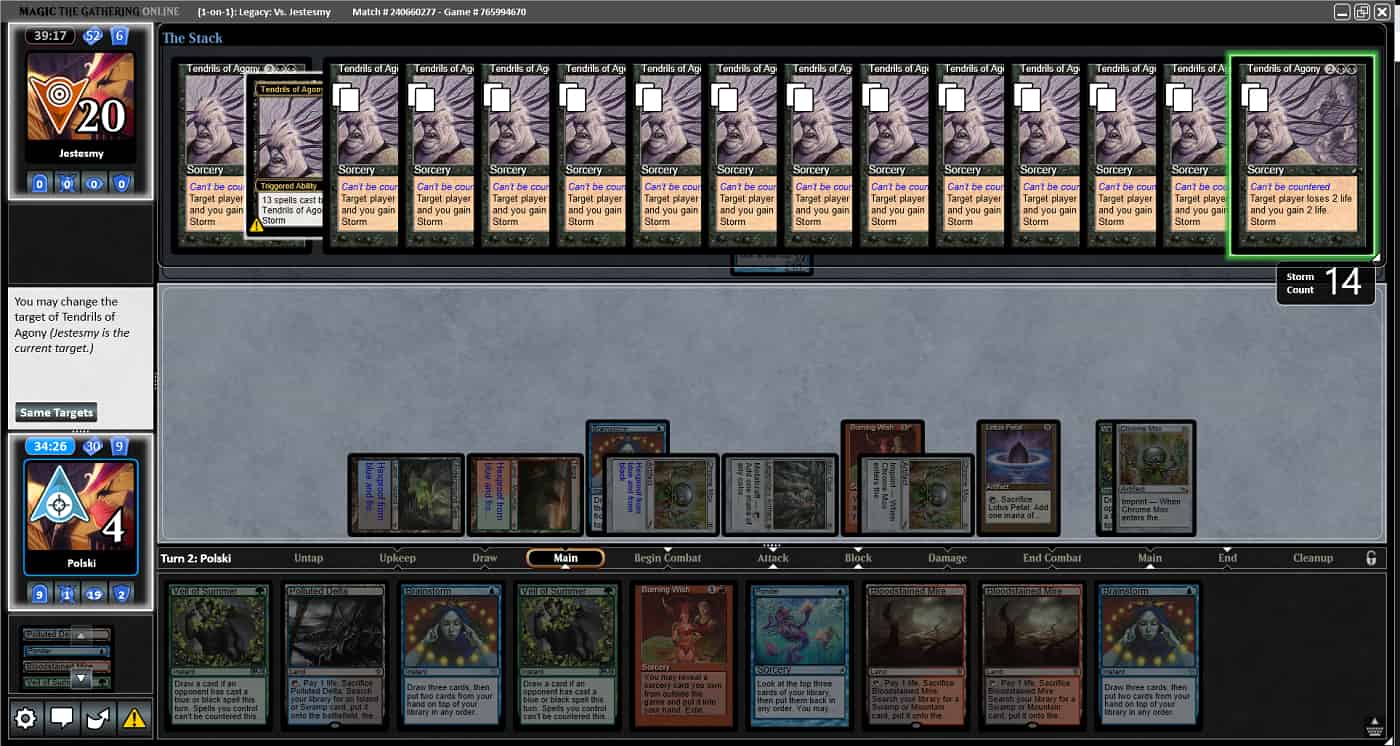 For the second game, I was on the draw and my opponent kept their seven-card hand, but I had to mulligan to six cards. My hand was really fast and had a turn one combo, but no protection and no way to recover if the opponent had a counterspell. I thought it would be better than a mulligan to five cards, so I kept it. On my first turn, I drew a [[Ponder]]. I decided to try and combo this turn because I felt waiting wouldn’t benefit me and I kept this hand to try and be aggressive. I led off by casting the [[Lotus Petal]], [[Lion’s Eye Diamond]], and the [[Dark Ritual]], off the swamp. 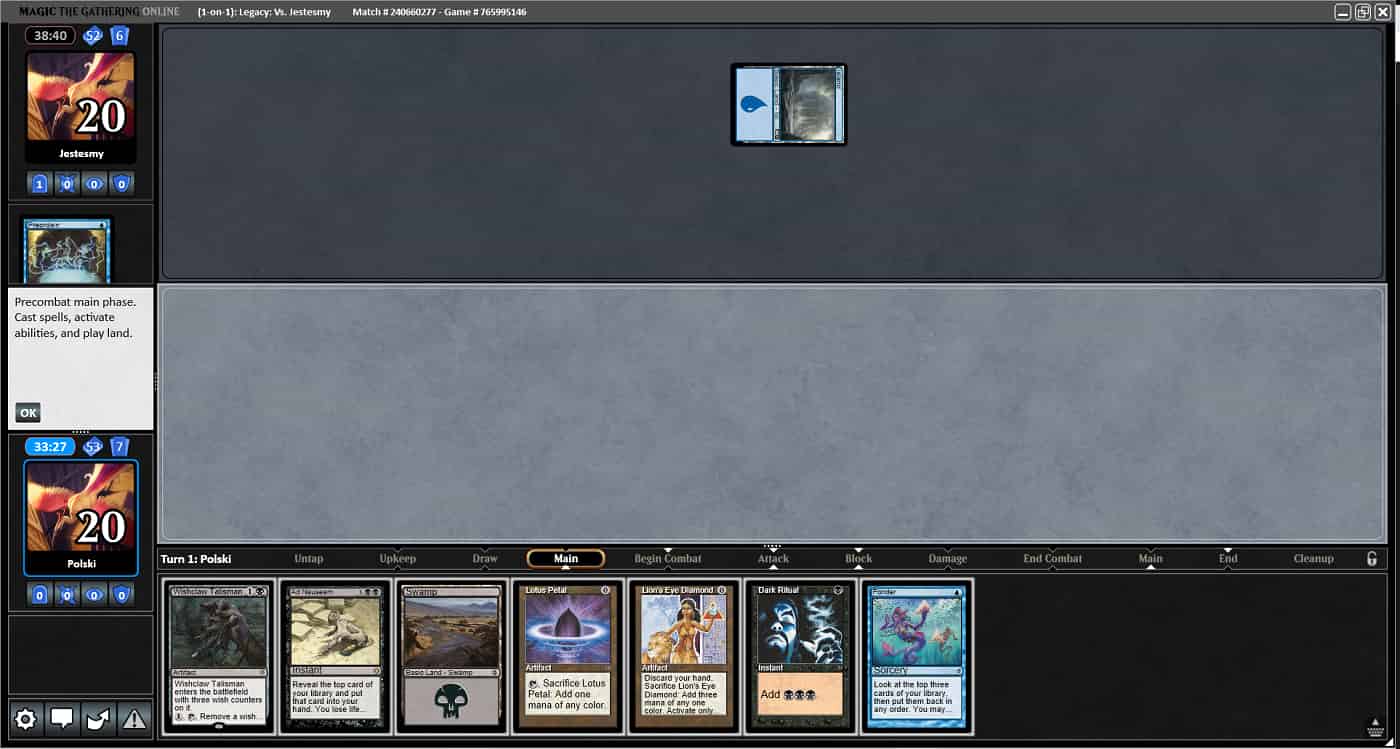 My opponent responded to the [[Dark Ritual]] with a [[Daze]]. I needed the [[Dark Ritual]] to resolve to have enough mana for [[Wishclaw Talisman]], so I had to pay the one mana with [[Lotus Petal]]. The opponent didn’t have any more counterspells, so I was able to use the three black mana to cast and activate [[Wishclaw Talisman]] to search for [[Echo of Eons]]. Once it was in my hand, I activated [[Lion’s Eye Diamond]] for three blue mana to put [[Echo of Eons]] into the graveyard and flashed it back. 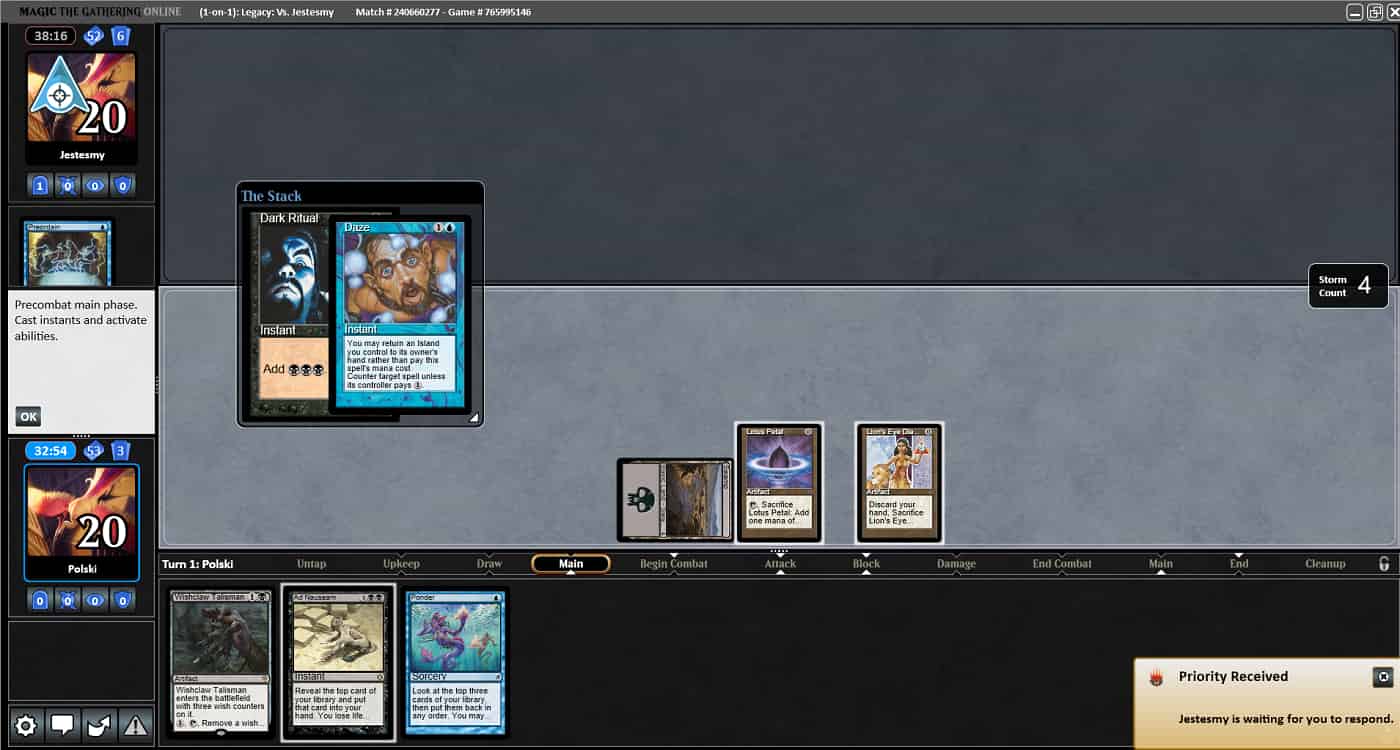 The seven cards from [[Echo of Eons]] wasn’t good enough to continue comboing this turn, but had the mana and protection to try on a future turn. I was just missing a tutor effect, but I had the [[Ponder]] to look for one. 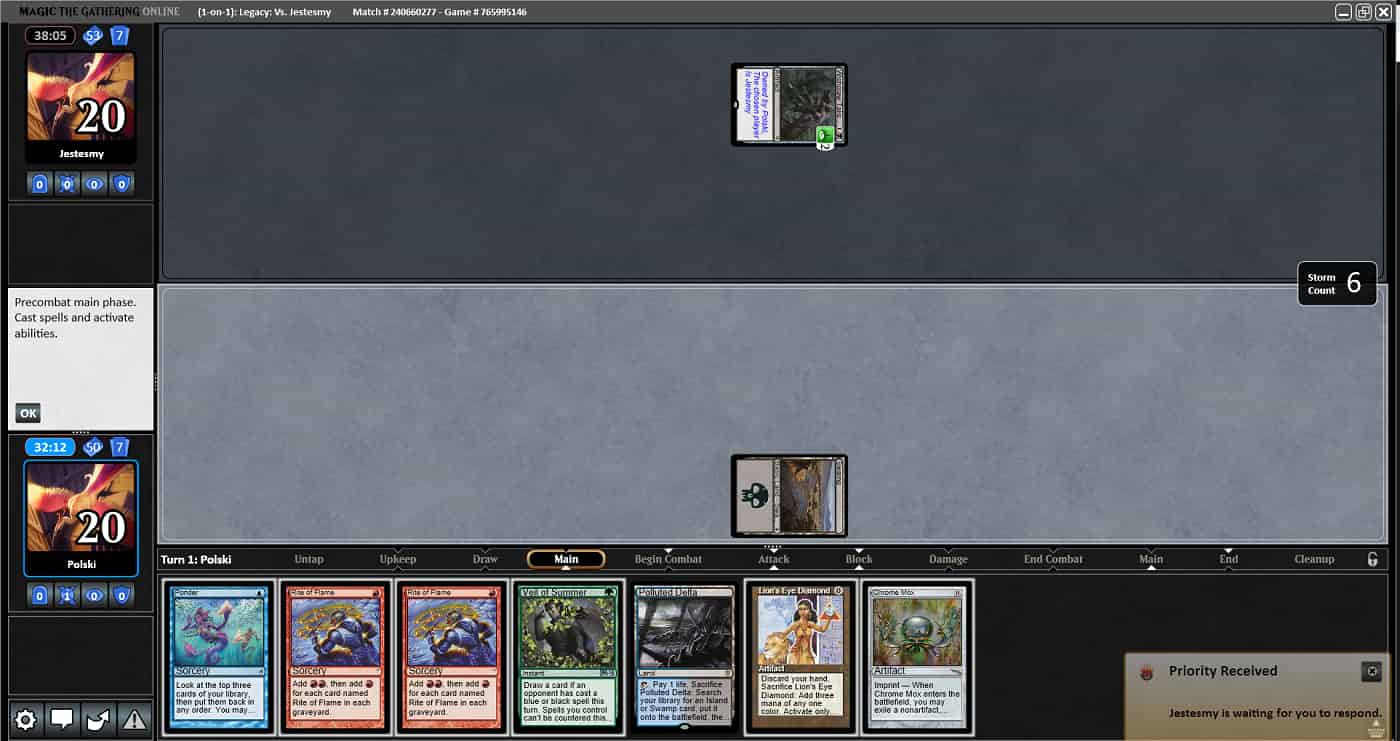 After passing the turn, my opponent just played a [[Dragon’s Rage Channeler]] and ended their turn. On my turn I cast the [[Ponder]] and saw [[Brainstorm]], [[Veil of Summer]], and [[Wishclaw Talisman]]. The [[Wishclaw Talisman]] would be exactly what I would need to combo on the next turn, so I kept them on top. 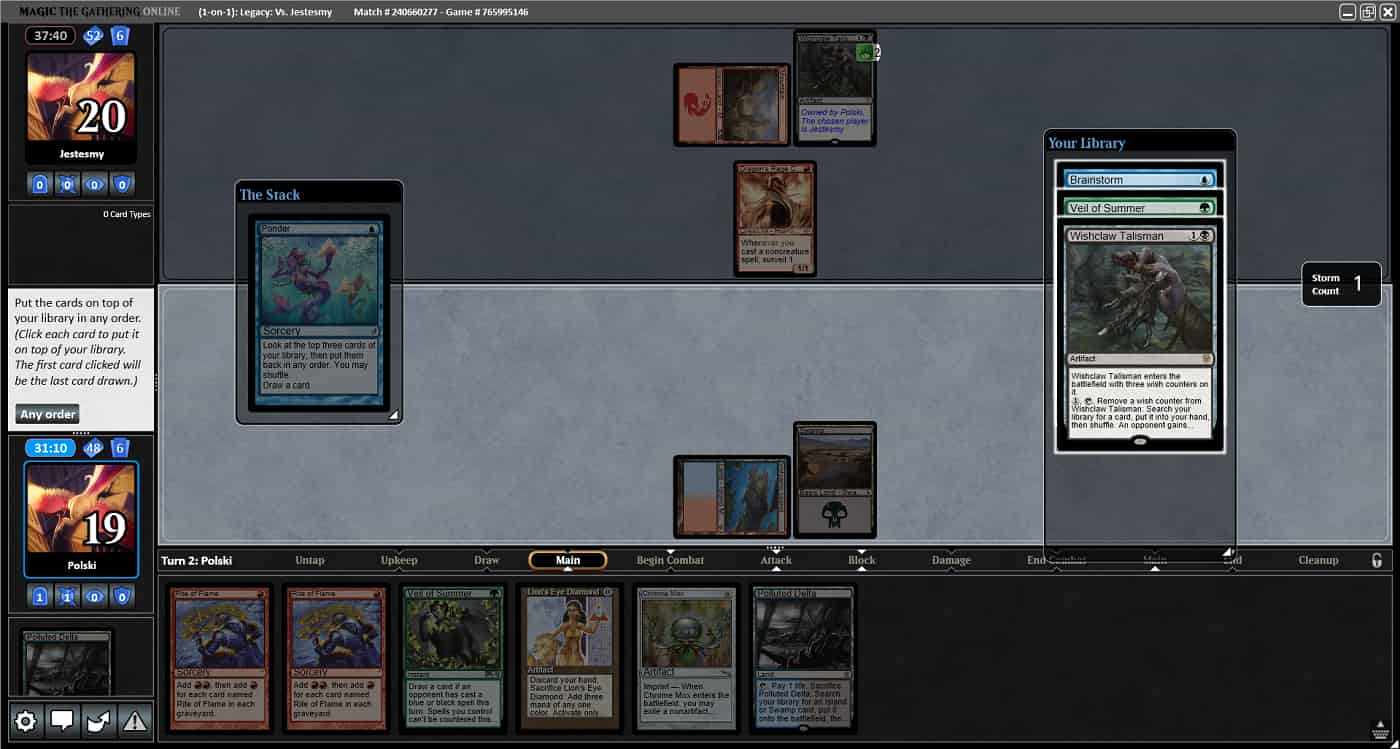 My opponent spent their turn just playing a land and attacking with [[Dragon’s Rage Channeler]]. I was pretty sure they had some amount of counterspells when they decided to not play anything. On my turn I drew the copy of [[Veil of Summer]] and decided this was the turn I wanted to combo off, so I imprinted the [[Veil of Summer]] with [[Chrome Mox]]. 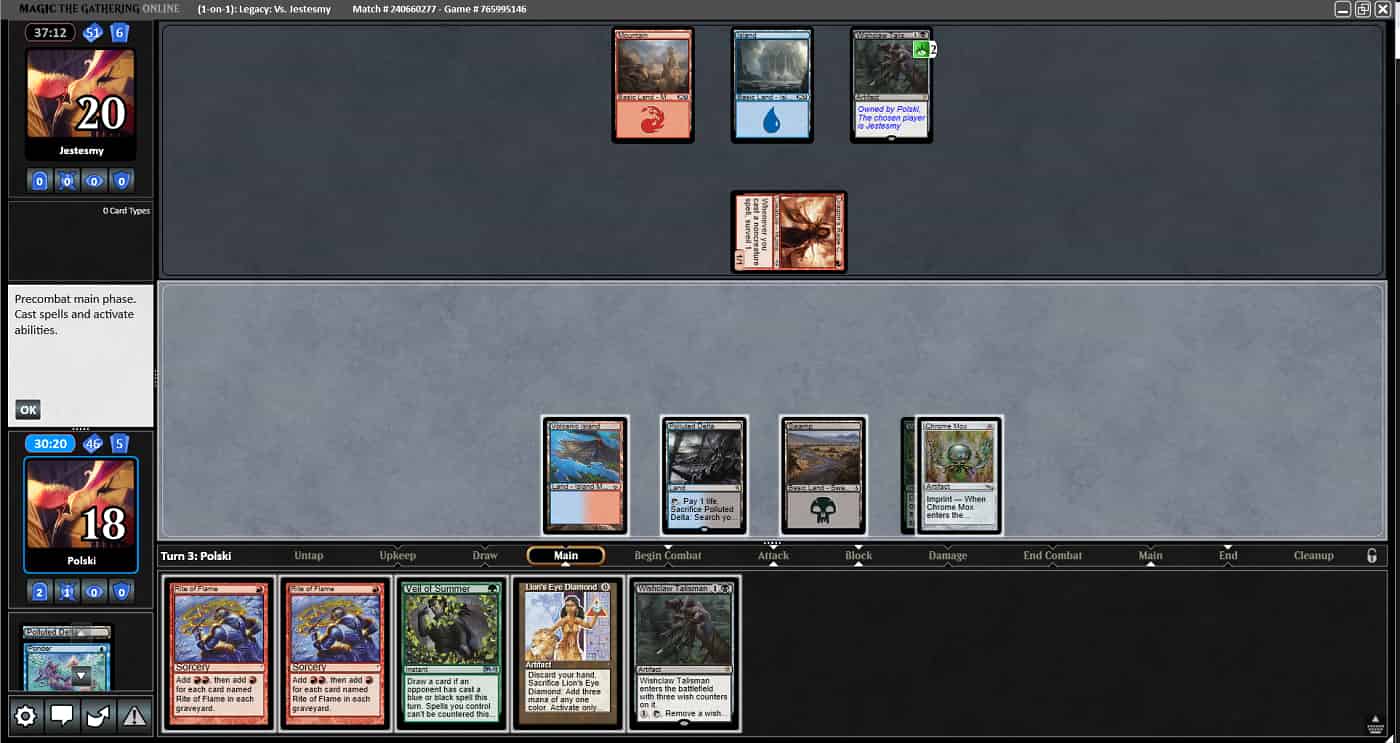 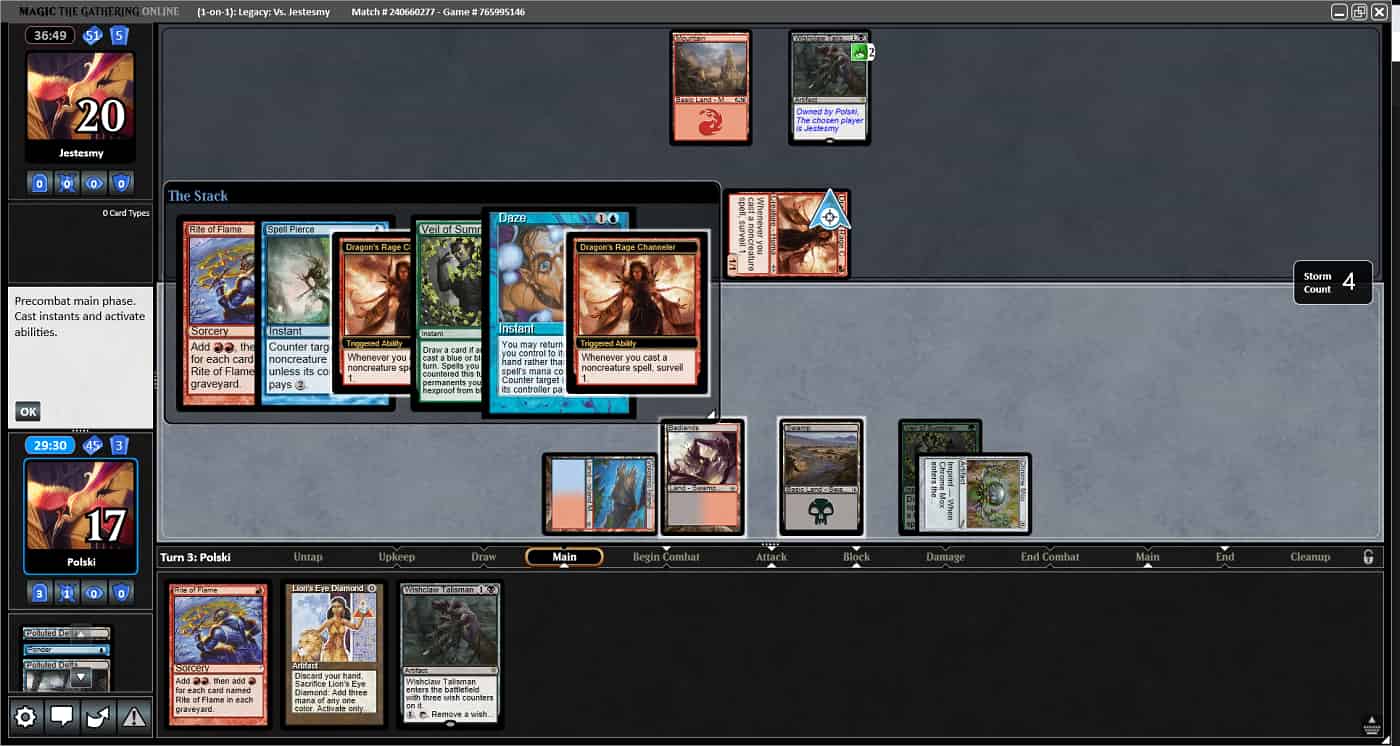 After the dust settled I continued with the second [[Rite of Flame]] and then cast both [[Lion’s Eye Diamond]] and [[Wishclaw Talisman]]. Due to all of the counterspells from the opponent, there was enough storm generated where I could use [[Wishclaw Talisman]] to search for [[Burning Wish]] and [[Tendrils of Agony]] for 20 damage! 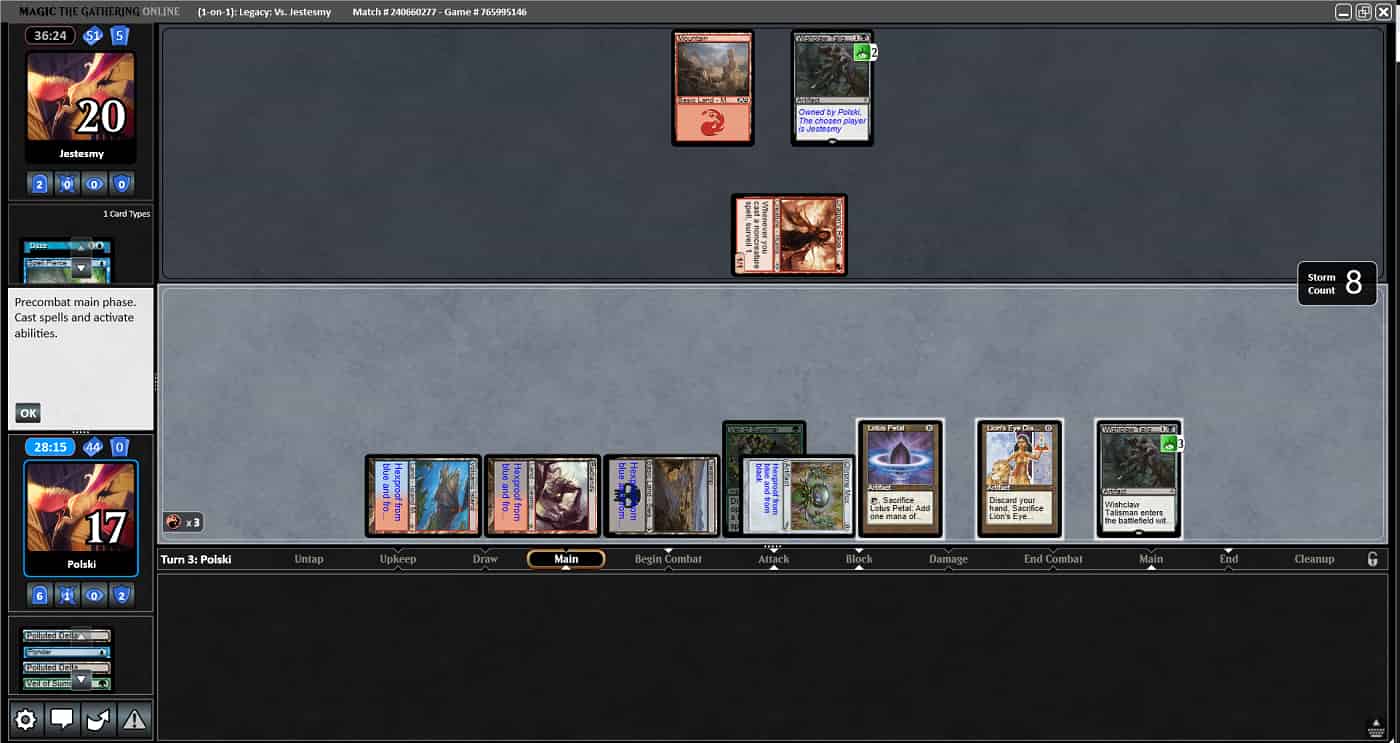 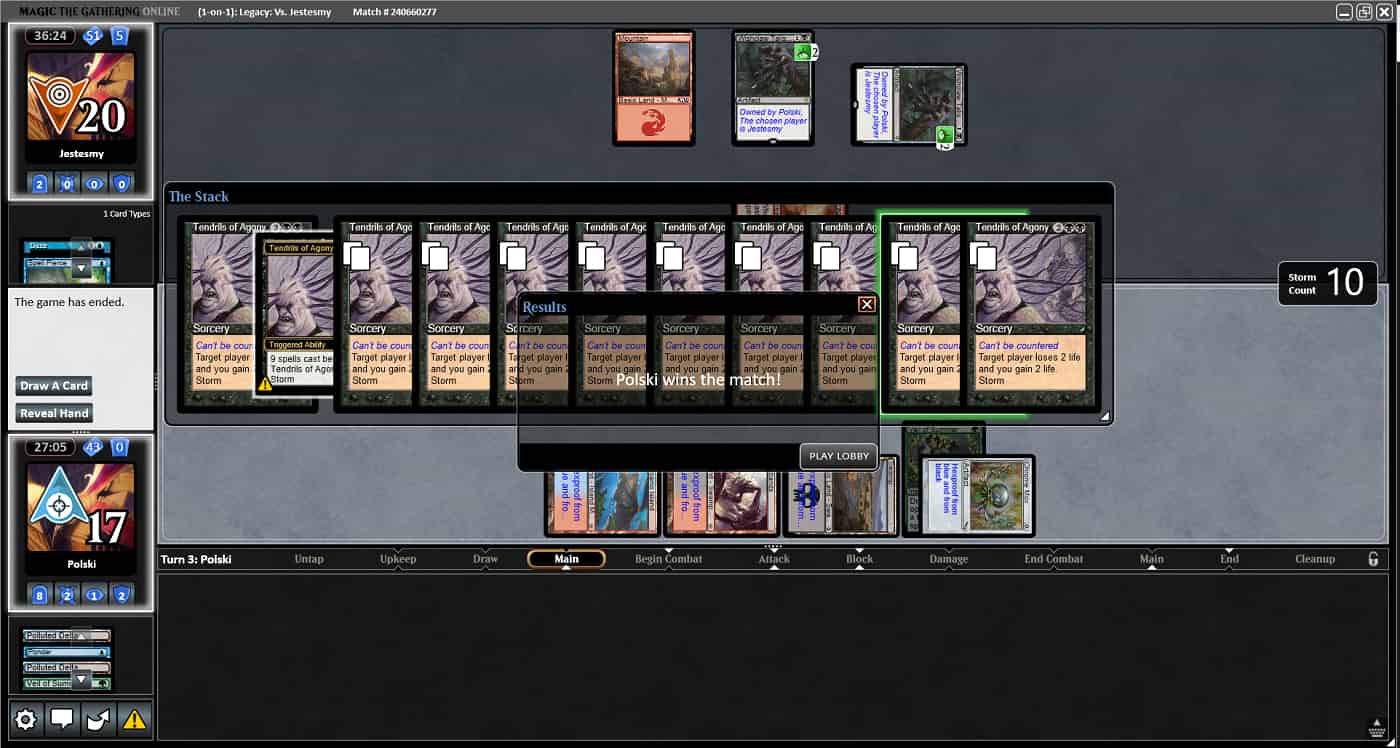 
These games were quick, so we didn’t get to see the full power of UR Delver or the new cards in the deck, but sometimes that’s how this matchup plays out. It’s exciting that there can be so many new cards like [[Dragon’s Rage Channeler]], [[Ragavan, Nimble Pilferer]], [[Murktide Regent]], and [[Expressive Iteration]] for both Legacy, and UR Delver. It really opens up Legacy to new decks or giving existing decks new tools to try out. We’ve really seen that with UR Delver gaining popularity recently. It’s a good deck, but I’m sure some of its popularity is also just to play with the new cards. No matter how well we think we know Legacy or the meta game it can always change with new cards, so we need to be constantly analyzing the matchups. I hope you enjoyed this article and can take some of the lessons learned and apply them to your own play testing.