Through the Looking Glass: ANT with Cyrus Corman-Gill 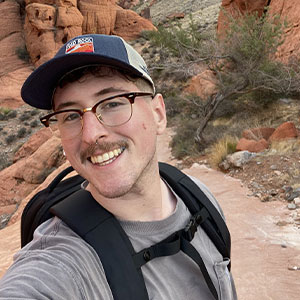 A few words on Cyrus Corman-Gill

Cyrus has been playing Magic since 2005, and Legacy since 2016. Playing Ad Nauseam Tendrils, they won Grand Prix Atlanta in 2019 and SCG Las Vegas in 2018. In addition, they have top 8’d Eternal Weekend in both Legacy and Vintage. They are attending law school this coming fall, and enjoy hiking, playing limited, and streaming Legacy in their free time.
How do you view the roles in the [[Ad Nauseam]] Tendrils (ANT) versus The EPIC Storm (TES) match-up?

The ANT versus The EPIC Storm matchup is dynamic, and the roles both players take depends on both deck construction and opening hands. Traditionally, ANT is slower and is trying to grind out an advantage with a higher density of cantrips, discard spells, and access to [[Past in Flames]]. The adoption of [[Veil of Summer]] and the host of sorcery speed engine spells that The EPIC Storm has gained access to in the last couple years make this plan much weaker for ANT, so the pressure is on the ANT pilot to be aggressive with their discard spells and combo when the shields are down for The EPIC Storm.

What sort of interaction does ANT deck have in game one? What should The EPIC Storm be on the lookout for?

ANT will always have access to four [[Thoughtseize]], and then 2-4 [[Duress]]. The green splash has access to [[Veil of Summer]], [[Boseiju, Who Endures]], and rarely [[Abrupt Decay]] game one. If playing Grixis, [[Burning Wish]] gives access to interactive spells such as [[Duress]] and [[Meltdown]].

Recent builds of ANT have implemented [[Burning Wish]] (championed by Magic Online user DemonicTutors) or [[Wishclaw Talisman]] in the build. How do you think these choices impact the The EPIC Storm Matchup?

Because [[Veil of Summer]] can make discard spells, [[Tendrils of Agony]] and [[Past in Flames]] all risky plays, [[Burning Wish]] giving you access to [[Empty the Warrens]], [[Grapeshot]], and [[Peer into the Abyss]] does improve the matchup. [[Wishclaw Talisman]] is more impactful on The EPIC Storm side than it is for ANT because The EPIC Storm is able to play [[Wishclaw Talisman]] under discard spells. This is irrelevant on the ANT side of the matchup.

Traditionally, ANT was favored in longer games due to the resiliency that [[Past in Flames]] provided. TES now has [[Echo of Eons]] as its Flashback spell, how does it influence your decisions?

I believe the pressure is on ANT to be more aggressive in the matchup now because of [[Echo of Eons]] in addition to the other engine spells such as [[Galvanic Relay]] and [[Peer into the Abyss]] that The EPIC Storm plays. I tend to go [[Ad Nauseam]] lines even when they are risky more often than I would have before.

The EPIC Storm plays four copies of [[Veil of Summer]] in the main deck. How does this card influence your deckbuilding decisions, if at all? Do you sideboard with the card in mind?

This card is a nightmare for ANT and it can be hard to beat one copy, let alone the multiple that The EPIC Storm has access to. [[Flusterstorm]] is the primary answer in the green splash of the list, while the Grixis list has access to [[Burning Wish]] for [[Empty the Warrens]] or [[Grapeshot]]. Because [[Veil of Summer]] does not have a large meta share, it is hard to adjust your list heavily against it. Mostly, you hope to play around it as best you can with sequencing and get lucky.

How do you think The EPIC Storm matchup compares to other [[Dark Ritual]] combo decks such as the mirror or [[Doomsday]] against ANT?

I believe ANT to be the weakest deck in the Dark Ritual combo mirrors. The EPIC Storm, [[Doomsday]], and Reanimator are all similarly hard. The EPIC Storm playing four copies of [[Veil of Summer]], being faster than ANT, and having access to a stronger late game makes it the scariest of the four to me.

How effective do you think [[Empty the Warrens]] is against ANT? Is it a card that you generally worry about coming from The EPIC Storm?

[[Empty the Warrens]] can be situationally powerful. I do not sideboard answers to it, but [[Burning Wish]] can give you access to sweepers. Being able to cast [[Empty the Warrens]] for even a small amount and then back it up with [[Veil of Summer]] will often be good enough.

Against The EPIC Storm, I always bring in two copies of [[Flusterstorm]], and then [[Veil of Summer]] depending on if I think The EPIC Storm has access to [[Grapeshot]] or not. Basic [[Swamp]] and [[Boseiju, Who Endures]] are both sideboarded out in the matchup, with [[Preordain]], and [[Veil of Summer]] being other considerations to sideboard out if you have additional cards for the matchup.

[[Flusterstorm]] has always been a sideboard option for ANT. A recent trend is to play [[Malevolent Hermit]] instead to improve the 8-Cast matchup. How do you feel about these cards?

[[Flusterstorm]] is your best sideboard card against The EPIC Storm as it can counter the payoff spells except [[Wishclaw Talisman]] and help you beat [[Veil of Summer]]. [[Malevolent Hermit]] can fulfill a similar role while also pressuring The EPIC Storm player’s life total. I lean towards [[Flusterstorm]] as I value the cheaper mana cost and trying to fight 8-Cast on a different axis.

[[Aeve, Progenitor Ooze]] is a powerful spell and solution to [[Veil of Summer]] instead of [[Detection Tower]] or [[Grapeshot]]. What are your thoughts related to the TES matchup?

[[Aeve, Progenitor Ooze]] is powerful and can be a good tool to get around [[Veil of Summer]] while also possibly making [[Ad Nauseam]] more risky for The EPIC Storm. I prefer to cast [[Ad Nauseam]] rather than cast [[Aeve, Progenitor Ooze]] if I have access to both, but it is nice to have the option if [[Veil of Summer]] would be otherwise game breaking.

The green splash has been declining in ANT recently, how do you feel about this? Do you find that the loss of your own potential copies of [[Veil of Summer]] is meaningful?

Demonic Tutor effects really built a beautiful Grixis list. My first time playing it, I was able to 5-0 a league for the first time in recent memory. It is hard to argue with such results. I have an attachment to the green splash as I have primarily played with it, but I am excited about the Grixis list. [[Veil of Summer]] is sort of a strange prisoner’s dilemma where the only matchup it is lights out in is the ANT mirror. I am fine not playing it, as long as my non-The EPIC Storm opponents don’t as well!

[[Galvanic Relay]] is a card that continues to overperform in The EPIC Storm and can be one of the tools for the TES pilot in the matchup. From the ANT perspective, how much do you care about this card?

[[Galvanic Relay]] is a powerful tool that can dodge discard and help grind in the matchup. You care about it as much as the other engine spells, and hope to race it, discard it, or counter it with [[Flusterstorm]].

What are the biggest mistakes that you believe players make in this matchup?

I believe players tend to be too risk averse. I try to be as aggressive as possible with comboing and interacting with my opponent as unlike in fair blue matchups, it does not get better for you to wait when your opponent can win the game in one turn or find another interactive spell.

I started out playing Storm with The EPIC Storm and am a big fan of the deck and content creators related to it. I wanted to shoutout y’all first of all. Additionally, they have been mentioned previously, but I also wanted to shoutout Ed (DemonicTutors) for all the work they have done with Grixis ANT.