Through the Looking Glass: Painter with Callum Smith 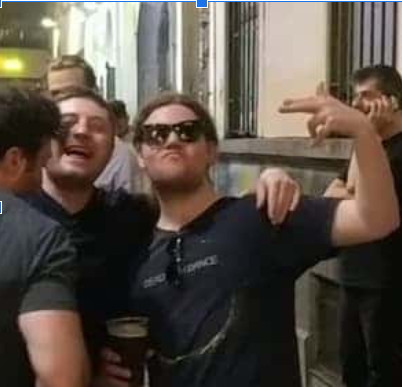 A few words on Callum Smith

Callum Smith is a casual-competitive player from London, England. He’s a host on the Everyday Eternal podcast and these days lover of all things with the artifact type.
How has [[Urza’s Saga]] changed the approach of Painter? Does [[Urza’s Saga]] impact the match-up against The EPIC storm?

Thanks to [[Urza’s Saga]] fetching it, you’ll notice the number of [[Grindstone]] has gone down to two or three copies too. This lowers the natural goldfish potential of the deck, often on turn two in conjunction with a pair of sol lands. It does, however, open up a fairly common pattern of turn-one [[Urza’s Saga]], turn-two [[Painter’s Servant]] and turn-three find a [[Grindstone]] off [[Urza’s Saga]] and activate it. This goldfish line comes up a lot when you’re facing another combo deck, especially as you can then use something like a [[Lotus Petal]] or [[Simian Spirit Guide]] to cast a [[Pyroblast]] to get you that turn three you need.

Regarding how it impacts Painters matchup vs. The EPIC Storm, it’s probably a negative assuming Painter would still play a full playset of [[Grindstone]] without [[Urza’s Saga]]. It opens up some tutor target potential like [[Soul-Guide Lantern]] and [[Pithing Needle]]. The [[Soul-Guide Lantern]] doesn’t do much as you’re not using the graveyard much, but [[Pithing Needle]] naming [[Wishclaw Talisman]] is legit, and a line I often take if I’m not setting up my own combo.

Painter has access to possibly eight [[Pyroblast]] effects as well as a fast combo, which makes it a dangerous strategy. Do you see Painter as a Control deck, Prison deck, or Combo deck? Does this role change when facing The EPIC Storm? If so, how?

Great question. A huge part of why I fell in love with the deck is it can assume all those roles depending on the matchup. At its heart it is a combo deck first. I win a majority of my games with the combo even if the route you got there was slow and grindy. It’s also not uncommon to win these days off the back of [[Urza’s Saga]] making a couple of constructs and going to town with [[Painter’s Servant]] and blasts backing them up. I still have the occasional game vs mopey control decks where you fetch [[Imperial Recruiter]] with [[Imperial Recruiter]] and let the train of 1/1s keep coming.

Painters role vs. The EPIC Storm will be try and slow the game down by interacting however it can. The EPIC Storm is the faster deck simply by design, so Painter is usually on the back foot, though it is also heavily dependent on opening hands. Sometimes you’re dealt a turn two combo, sometimes you have a [[Painter’s Servant]] and a bucket of blasts. Or sometimes Painter has a fast [[Karn, the Great Creator]] which is bad games.

Kamigawa: Neon Dynasty has some potential playable cards for [[Painter’s Servant]] combo. Do any of them impact the Storm matchup?

I don’t think so. [[Twinshot Sniper]] is a nice addition to the deck, but doesn’t help in the matchup so will be sideboarded out. The other card I have my eye on is [[Experimental Synthesizer]], but it needs more trying and isn’t going to make or break the matchup.

There are a lot of different ways to build [[Painter’s Servant]] combo, which colors (if any) best help to improve the Storm matchup? Why?

Mono blue is probably the best at fighting other combo decks. Firstly, it has access to countermagic that’s not reliant on [[Painter’s Servant]] being in play like [[Force of Will]] and [[Flusterstorm]]. Secondly, it also typically has more fast mana to goldfish quickly. It’s not played very much currently though as it can be a lot weaker vs Delver than the other builds.

After that Strawberry Shortcake (Red with a light white splash) would be next thanks to white bringing [[Enlightened Tutor]] and [[Ethersworn Canonist]], the latter especially is a killer tool in fighting Storm based combo and is capable of stealing game ones singlehandedly.

Imperial Painter, my preferred version, is then a little lower down on the list, and you could bundle up this build and whatever splashes it sometimes comes with, be it black for [[Daretti, Ingenious Iconoclast]], green for [[Once Upon a Time]]. These tend to be a little slower, so The EPIC Storm should be able to goldfish them faster in game ones. The green splash can also come with [[Veil of Summer]], a very potent card especially in conjunction with [[Painter’s Servant]], but the numbers it’s played in aren’t set as it’s a fairly new development for the deck thanks to Roger Sikes, and he’s been playing zero copies.

How aggressively do you mulligan for a combo-piece such as [[Painter Servant]] compared to something like [[Karn, the great Creator]] or a prison piece?

Knowing the matchup is The EPIC Storm I mulligan incredibly aggressively for either a fast [[Karn, the Great Creator]] or a fast combo, ideally a [[Karn, the Great Creator]] as it’s by far the best card in the matchup. In my experience, slow hands with a [[Painter’s Servant]] and some blasts can be a bit of a trap as you still only play two copies of [[Grindstone]] generally and your addition copies in [[Urza’s Saga]] have suspend three. My very rough rule of thumb is I am fine going down to five cards looking for something strong or explosive.

How do you think The EPIC Storm matchup compares to other [[Dark Ritual]] combo decks such as [[Ad Nauseam]] Tendrils or [[Doomsday]] against Painter?

[[Doomsday]] is the easiest of the [[Dark Ritual]] combo decks. [[Grindstone]] even without [[Painter’s Servant]] is highly relevant in the matchup naturally milling them post [[Doomsday]]. We also have copies of [[Pyroblast]] that interact with their own protection pieces or combo ([[Thassa’s Oracle]] and [[Ideas Unbound]]) and [[Torpor Orb]] from the sideboard.

[[Ad Nauseam]] Tendrils is in the middle as they’re slower but also use the graveyard. This allows Painter more time to set up or combo, or get a [[Soul-Guide Lantern]] out turning off [[Past in Flames]], so they need to win with [[Ad Nauseam]] usually, so I prioritise getting chip damage when I can in the matchup.

The EPIC storm is the hardest in my experience due to the sheer speed the deck can go off at. Painter has very little turn zero interaction, and as I mentioned earlier, can be at the mercy of the opening hands it’s given and how it plays.

How effective do you think [[Empty the Warrens]] is against Painter? Is it a card that you generally worry about coming from The EPIC Storm?

Not very, I don’t expect it to be played against me unless things are going badly for the Storm player and it’s their best option in a tough situation. [[Goblin Engineer]] is a 1/2 and [[Painter’s Servant]] a 1/3 making them good blockers to turn what is usually a two-turn clock into a three, and in that time you can usually cobble the combo together.

How do you value cards such [[Surgical Extraction]], [[Tormod’s Crypt]] or any additional graveyard hate against The EPIC Storm? Do you play any of them?

Very low, I wouldn’t side them in against The EPIC Storm for their effects. The only graveyard relevant cards on my radar are [[Rite of Flame]] and [[Echo of Eons]]. [[Rite of Flame]] is not high impact enough to be sideboarding for, and [[Echo of Eons]] never gives you time to respond when used with [[Lion’s Eye Diamond]]. I do sometimes actually board [[Tormod’s Crypt]] in vs. fast combo decks even if the graveyard isn’t relevant through simply as a zero cost artifact to helps with [[Goblin Welder]] and [[Goblin Engineer]] activations.

There’s usually more to side out than in, thus why something like [[Tormod’s Crypt]] can come in as I just mentioned. It will depend on the list, but I’m usually looking to cut copies of [[Lightning Bolt]], an [[Ensnaring Bridge]], all or most of the [[Recruiter of the Guards]], and the [[Magus of the Moon]]. I love [[Magus of the Moon]] vs. [[Ad Nauseam]] Tendrils or [[Doomsday]], but The EPIC Storm operates off [[Mox Opal]] and [[Lotus Petal]] with red lands just fine.

With Painter being a two-card combo strategy, do you expect The EPIC Storm to bring in permanent hate? If so, how much?

[[Chain of Vapor]] is the only card I expect to see boarded in as it answers [[Karn, the Great Creator]], but otherwise no as it will just dilute your game plan of being faster. I’m glad to see you have cut [[Pulverize]] recently!

Painter isn’t grinding through five-plus cards drawn most likely, so I would hope to either drop a [[Karn, the Great Creator]] or combo you in the turn gained. I’m certainly not the expert here, but I would be surprised to see [[Galvanic Relay]] sideboarded in vs. Painter as the matchup is about speed at its core to me. If you had more removal to board in, I could see a slower plan alongside it working, but as is I think the Storm player wants to be killing as fast as possible.

From the Painter side it’s probably defaulted to naming blue. The EPIC Storm is playing [[Veil of Summer]] so can use it to counter a [[Grindstone]] activation for a turn, or counter a [[Pyroblast]]. You do still need to name blue fairly often, but give it a hard think every time you cast a [[Painter’s Servant]].

From the Storm side, showing any respect, honestly. Painter usually has very little stack interaction. We want to hit with you hate permanents or combo you, so if you have a kill that just loses to some stack interactions you should probably go for it.

Thanks for having me on again! Always a pleasure to cast copies of [[Karn, the Great Creator]] vs. stormbros, and shout out to the Painter discord for being awesome.