Jeskai Ragavan is a midrange deck made up of counterspells, removal spells, and cheap creatures with the main one being [[Ragavan, Nimble Pilferer]]. Ever since its printing, many decks have been trying to use [[Ragavan, Nimble Pilferer]], and the Jeskai shell seems to be doing it the best. Jeskai Ragavan also plays some other new cards like [[Dragon’s Rage Channeler]], [[Murktide Regent]], and [[Prismatic Ending]]. With all of the new cards being added to popular Legacy decks, it’s important we stay prepared.

How does Jeskai Ragavan matchup against TES?

[[Force of Will]], [[Force of Negation]], [[Daze]] – We should be familiar with playing against these as they are the most common counterspells in Legacy. Jeskai Ragavan can play many different counters in the sideboard like [[Spell Pierce]], [[Flusterstorm]], or [[Pyroblast]]. All of these are effective at disrupting a Storm combo and the combination of a fast clock can make it difficult for any combo deck to win through.

In this matchup, we aren’t under any pressure to have a lightning fast hand. The opponent isn’t going to have any hate permanents or be have a combo that lets them win in the first couple of turns, so we can take our time. If we are too slow though, the opponent will be able to win by turn 4-5 by attacking with their creatures. Additionally, if we give the opponent too many turns they will be able to find several counterspells. We want to try and win before then, so by turn 3-4, we should be looking to combo off. This gives us enough time to find our combo and protect it with an [[Orim’s Chant]] or [[Veil of Summer]]. Since we switched to white for [[Orim’s Chant]] and [[Prismatic Ending]] and removed [[Defense Grid]], our deck is already to setup for this type of matchup.

This is a matchup that rewards us for playing white compared to our previous version of TES. [[Defense Grid]] is good against counters, but not when their deck also has [[Prismatic Ending]]. That is one of the main reasons for the switch to white. [[Orim’s Chant]] instead of [[Defense Grid]] will really shine in this matchup because it’s a protection card that can’t be interacted with on the field. Because we have already configured TES in such a way to be good against this type of deck, we don’t have much to sideboard to improve it. The only consideration would be [[Galvanic Relay]], but with the opponent potentially having a fast clock and already having access to it through [[Burning Wish]], I don’t bring in extra copies. If we still had [[Defense Grid]] in the deck, I would bring [[Galvanic Relay]] in because I would want another way to beat counterspells since relying on [[Defense Grid]] is unlikely.

To start the game off, my opponent was on the play and led with a [[Dragon’s Rage Channeler]] and I played a [[Ponder]]. On the second turn my opponent just played a land and passed. For my second turn, I cast another [[Ponder]] looking for more rituals because I had the [[Burning Wish]] and an [[Orim’s Chant]] but just needed a way to combo faster. One of the cards on the top of my library was a [[Lion’s Eye Diamond]], so I kept them on top. My plan was to try and combo on the following turn with [[Burning Wish]] and [[Lion’s Eye Diamond]] for [[Echo of Eons]] with [[Orim’s Chant]] as protection. 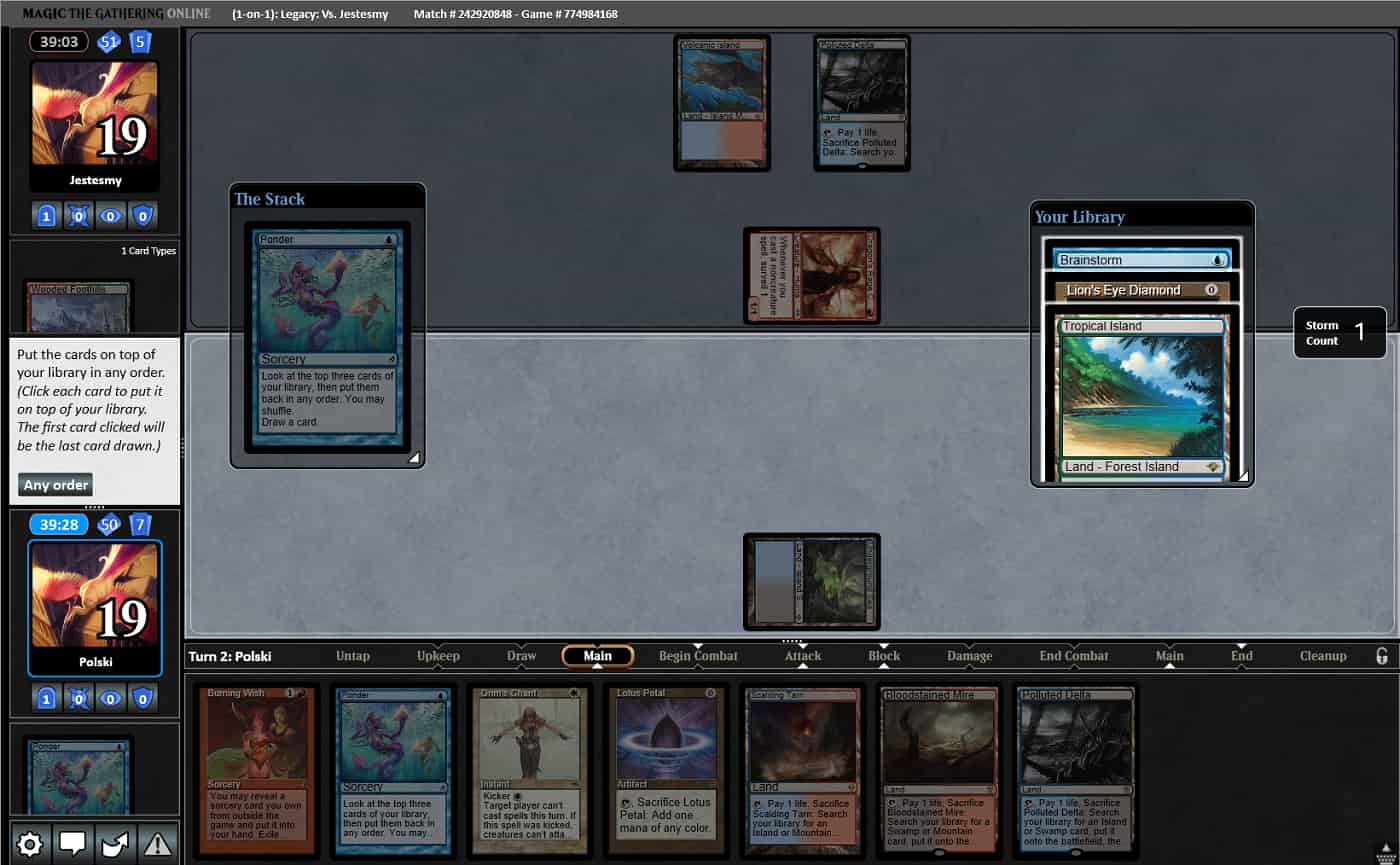 My opponent used their second turn to cast an [[Expressive Iteration]] and exiled a [[Prismatic Ending]], but I didn’t have any permanents to target. The opponent then just attacked and passed the turn. For my third turn, I drew the [[Lion’s Eye Diamond]] and wanted to make this the turn I tried to combo. 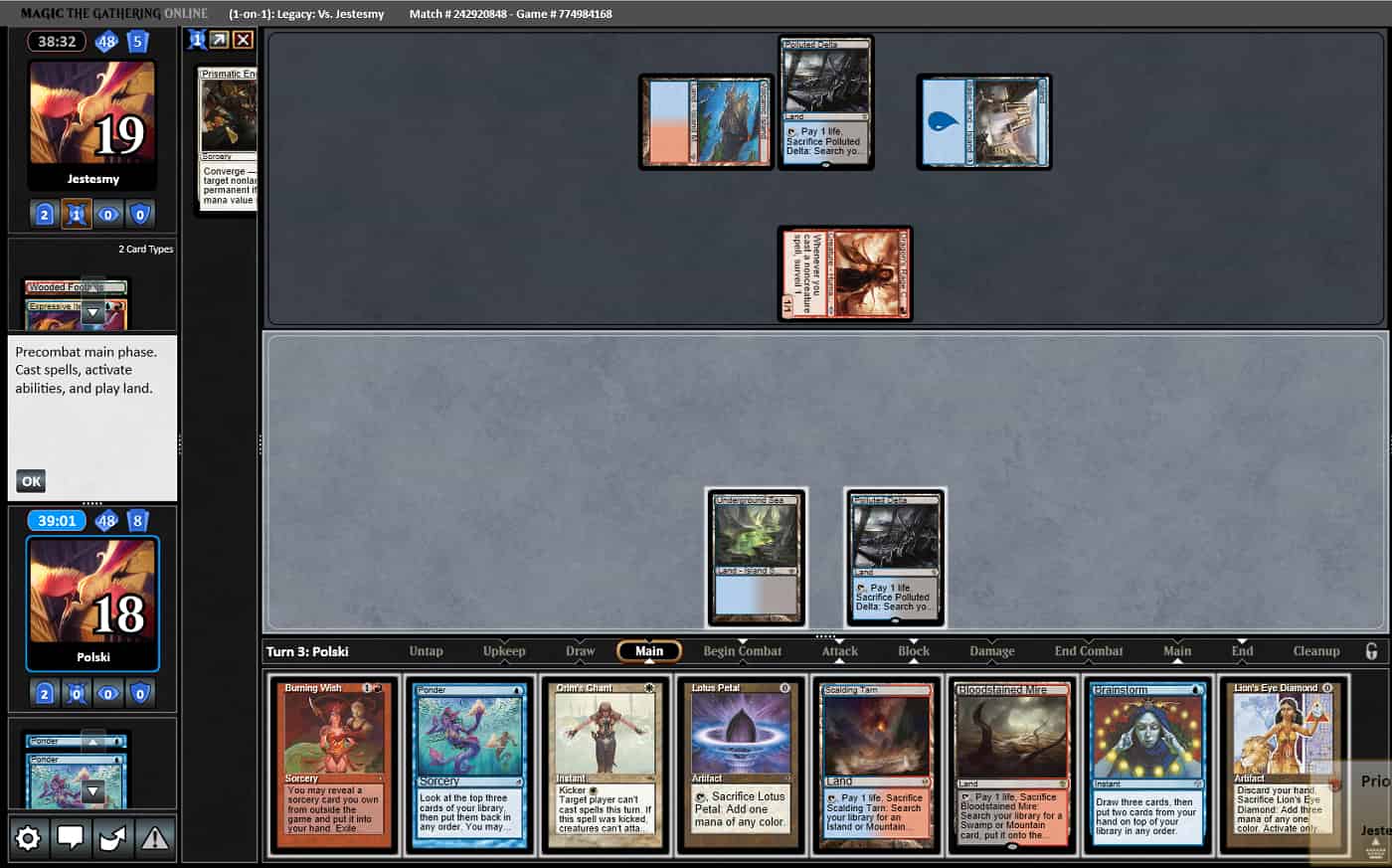 I played my land and led with a [[Orim’s Chant]] that was immediately targeted by [[Spell Pierce]]. I chose not to pay the two mana and continued with going for the combo. The opponent could still have a [[Force of Will]], but waiting extra turns will lead the opponent to just finding more counterspells. They also only had four cards left in hand. 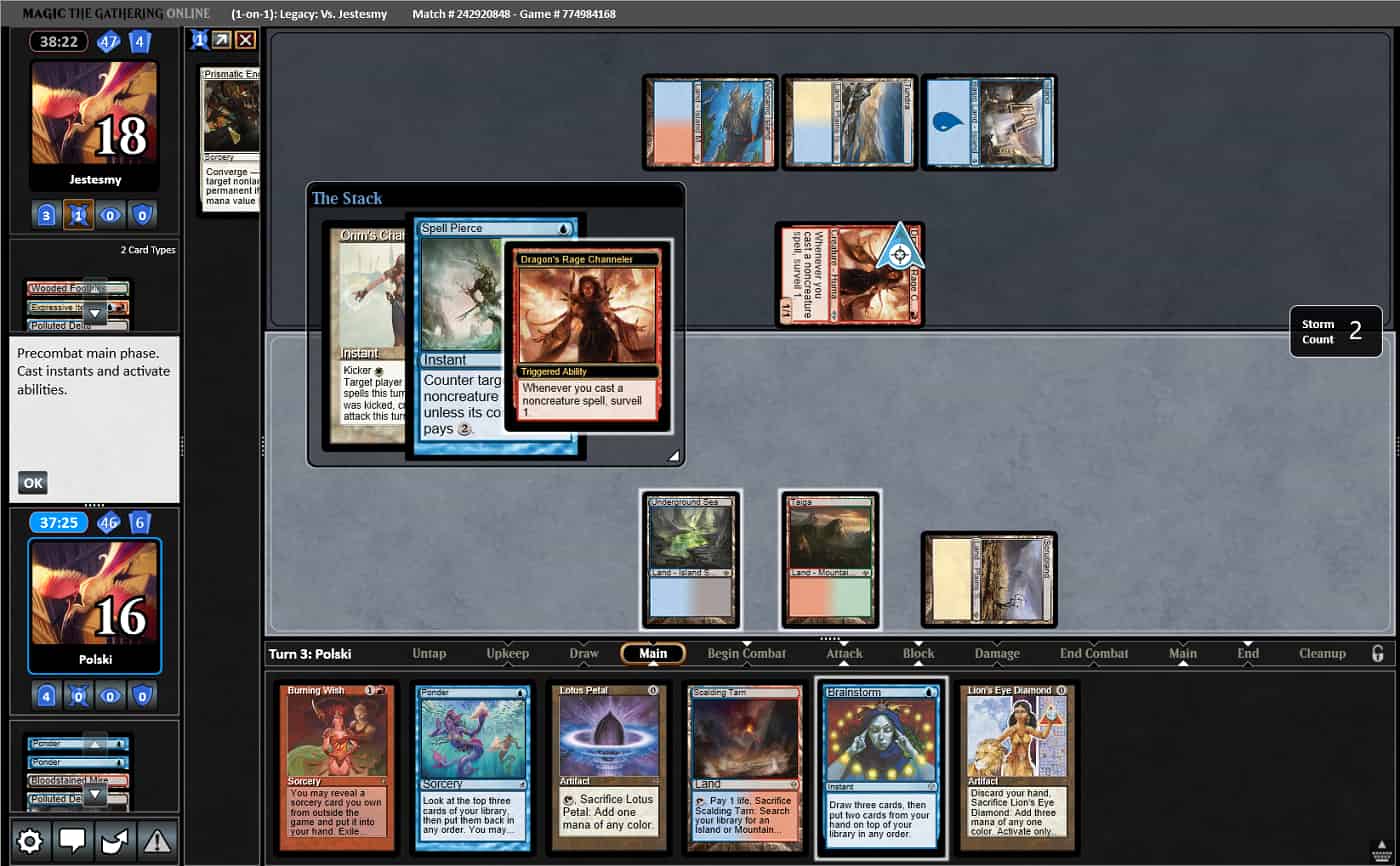 After [[Spell Pierce]] resolved, I cast the [[Lotus Petal]], [[Lion’s Eye Diamond]], and [[Burning Wish]] for [[Echo of Eons]]. I then sacrificed the [[Lion’s Eye Diamond]] to put [[Echo of Eons]] into the graveyard and then cast it. This all resolved so we both drew seven cards. I had the resources to [[Burning Wish]] for [[Tendrils of Agony]] with enough Storm to win the game, but I was one mana short for [[Veil of Summer]] too. There was a high likelyhood that the opponent drew a [[Force of Will]] or a [[Daze]], so I decided to wait a turn to protect the combo. 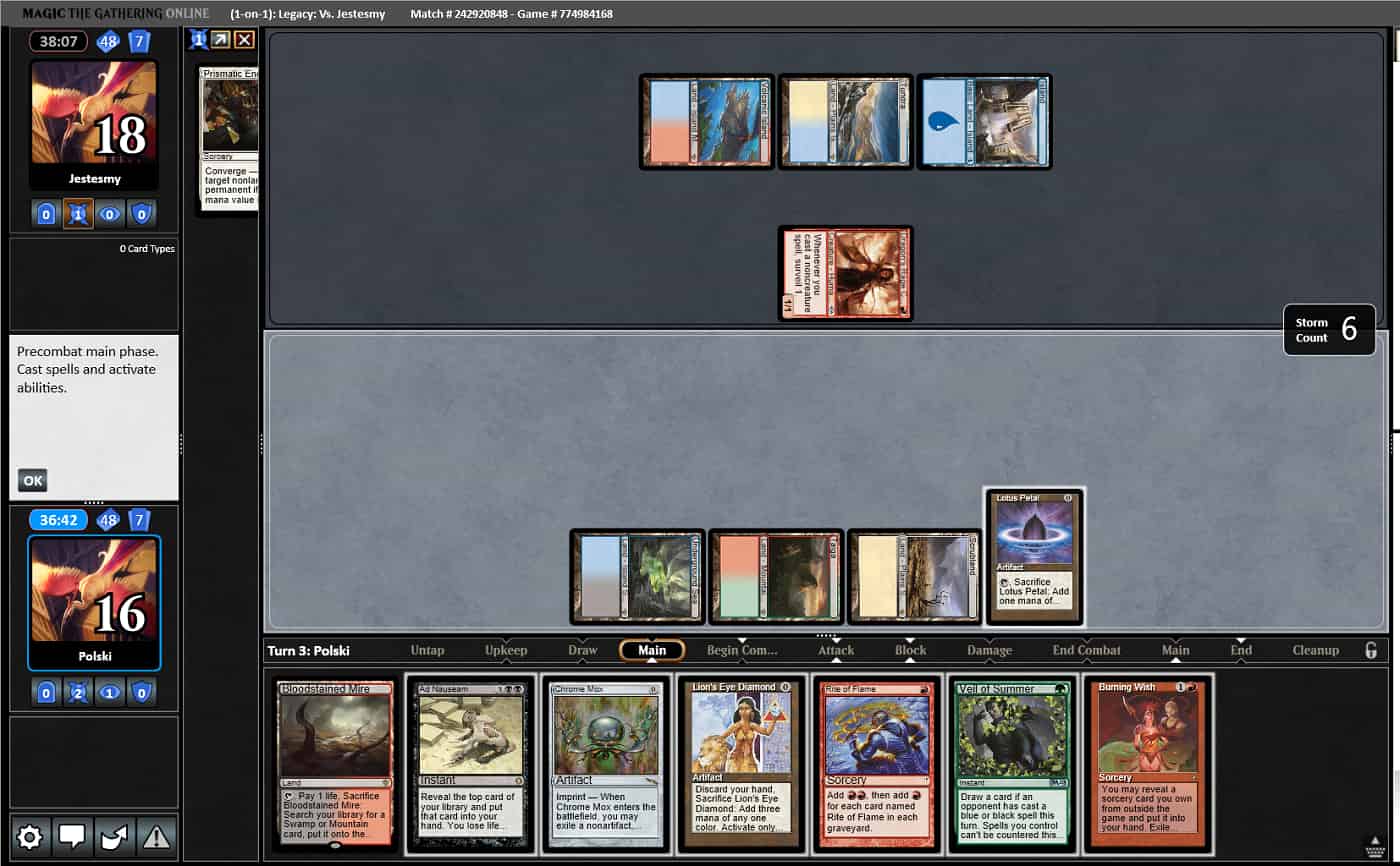 My opponent spent their turn casting a [[Narset, Parter of Veils]] and put a [[Daze]] into their hand and just attacked. During my turn, I led with a [[Veil of Summer]] to try and protect my combo. It was immediately countered by [[Force of Will]]. 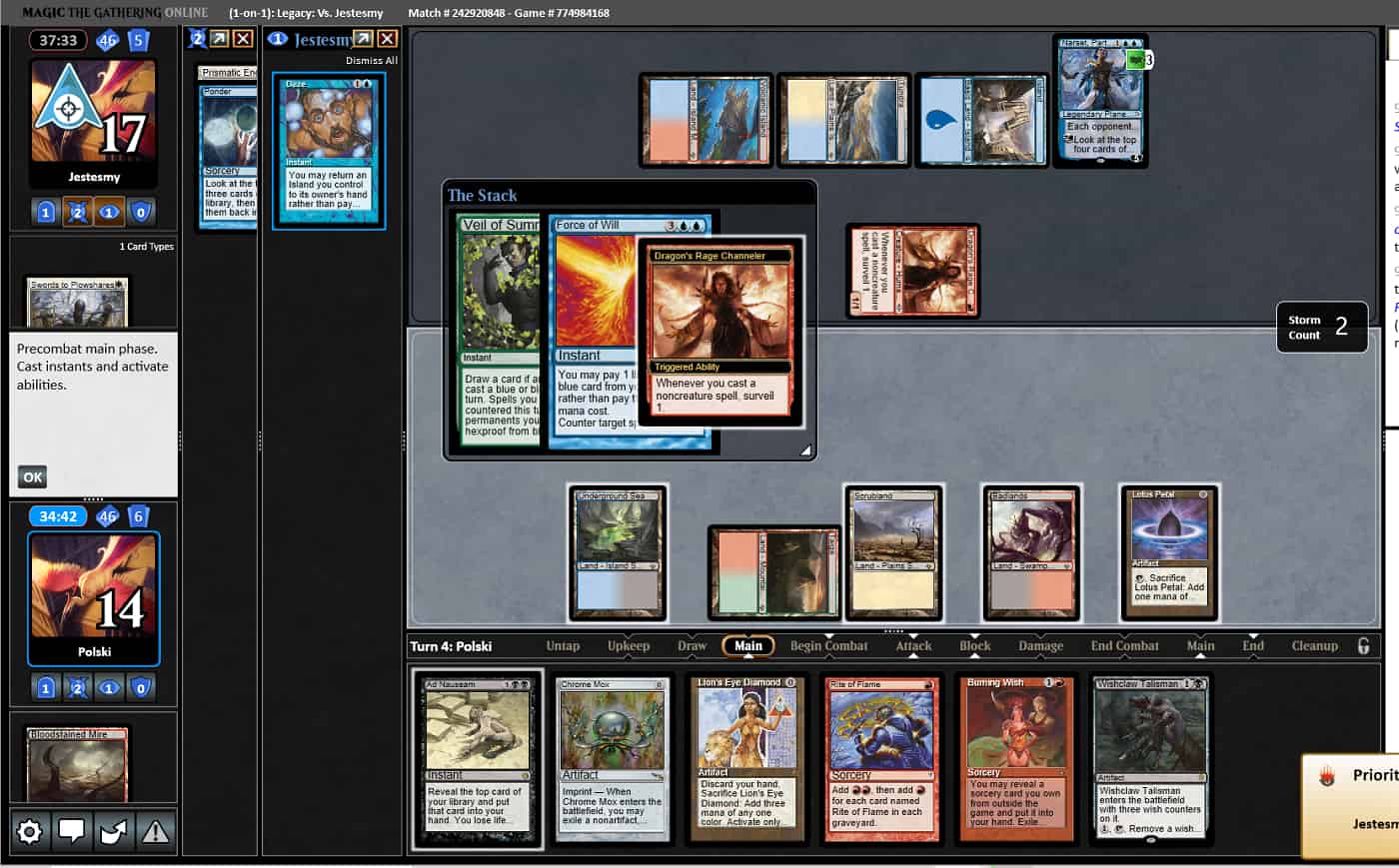 I decided to keep going with the combo here because waiting more turns would not benefit me with the opponent having a [[Narset, Parter of Veils]]. I cast my artifacts, [[Rite of Flame]] and then [[Ad Nauseam]]. My opponent cast [[Daze]] on it, and I used [[Lion’s Eye Diamond]] to pay for it and float two black mana. 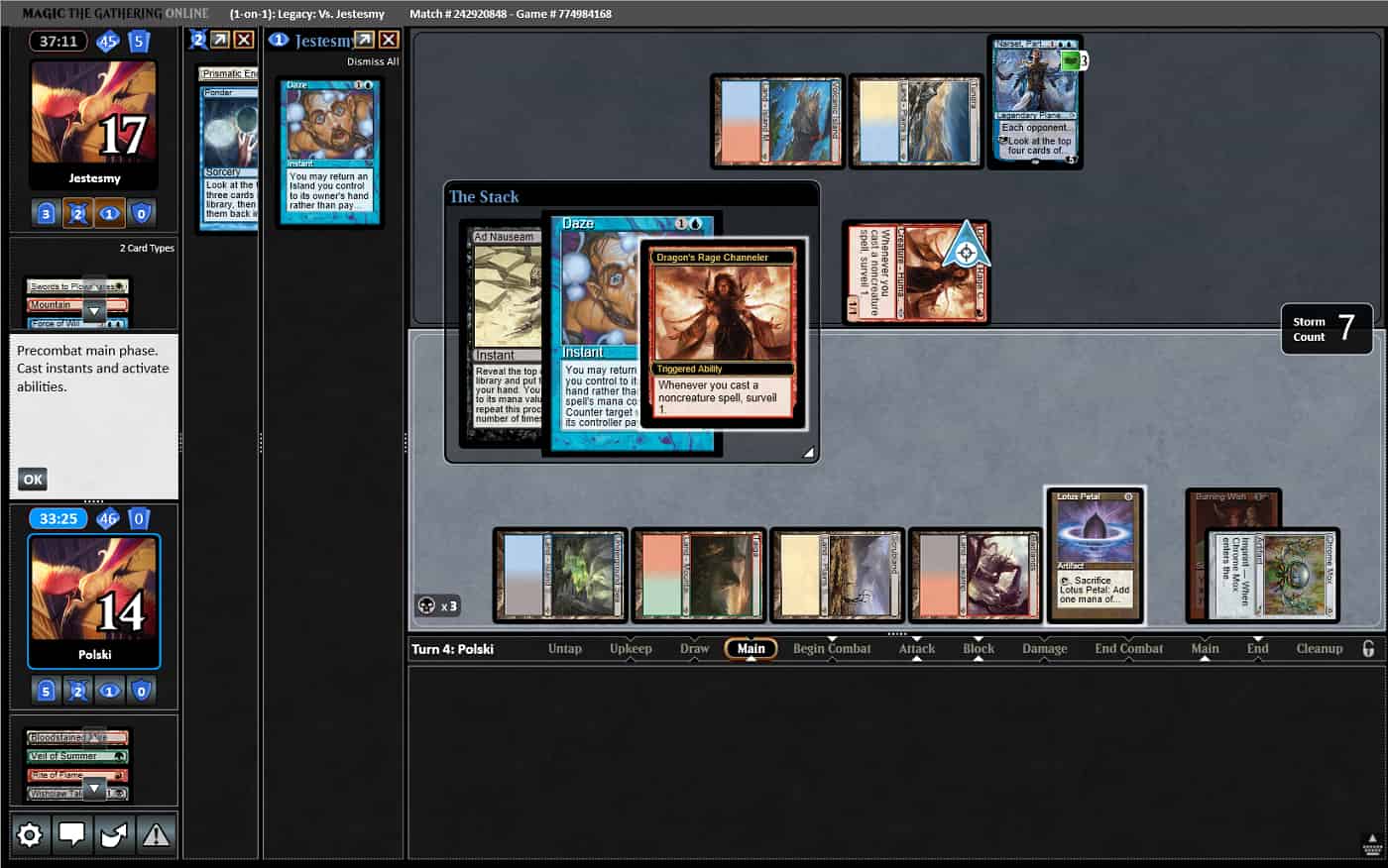 As usual, an [[Ad Nauseam]] from a high life total, was good enough to find the [[Tendrils of Agony]] and enough Storm to win the game. 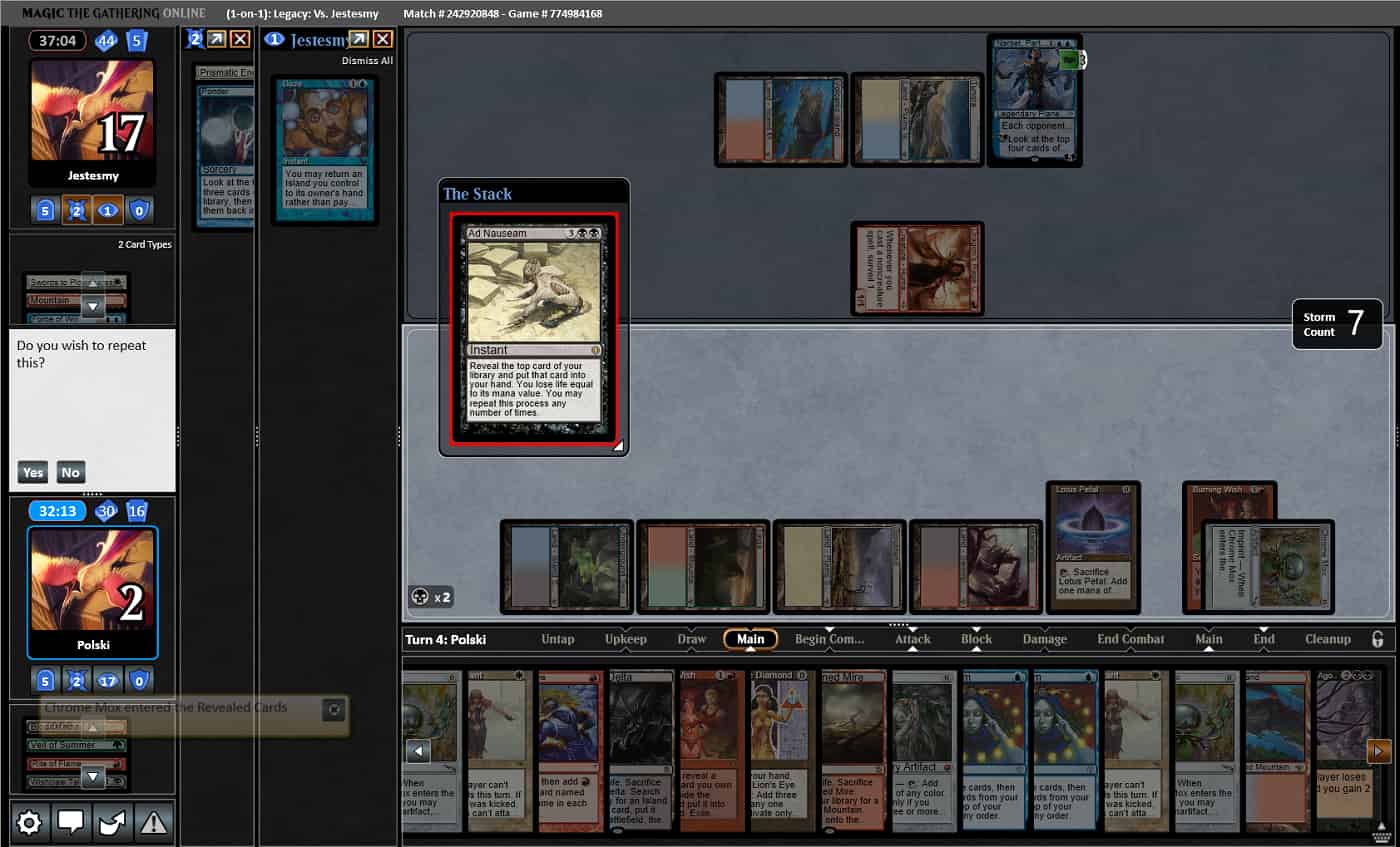 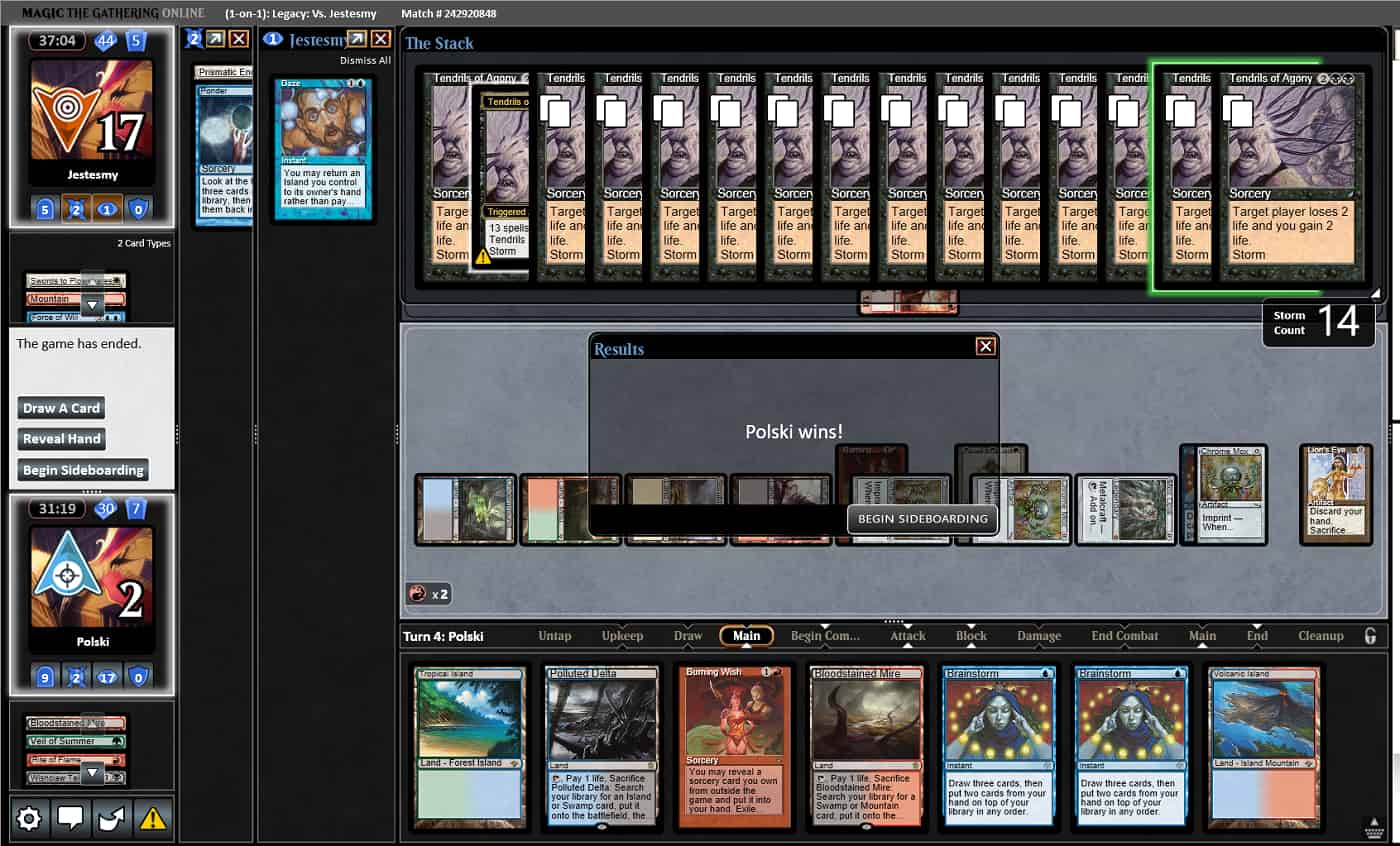 This was a scenario that came up in my testing, and I wanted to talk through it because it’s a good example of how I like to play against counterspell decks. I was on the play and had lots of mana and a [[Ponder]]. I cast it looking for a tutor effect and protection. I found a [[Burning Wish]], but no way to protect against counterspells. I could play this hand slower and try to use the [[Brainstorm]] to find a [[Orim’s Chant]] or [[Veil of Summer]] and possibly bait out a counterspell with the second [[Burning Wish]]. Another option would be just to take the [[Burning Wish]] and use the artifact mana to [[Burning Wish]] for [[Echo of Eons]] and immediately flash it back with [[Lion’s Eye Diamond]]. This line loses to a [[Force of Will]], but not to [[Daze]] because the opponent doesn’t have a land in play. There is a high probability the opponent would keep a hand without a [[Force of Will]] if they had a [[Daze]] or cantrips. I thought giving the opponent more turns would be more advantageous to them because I still didn’t have a protection spell, and there’s no guarantee the [[Brainstorm]] would find one. 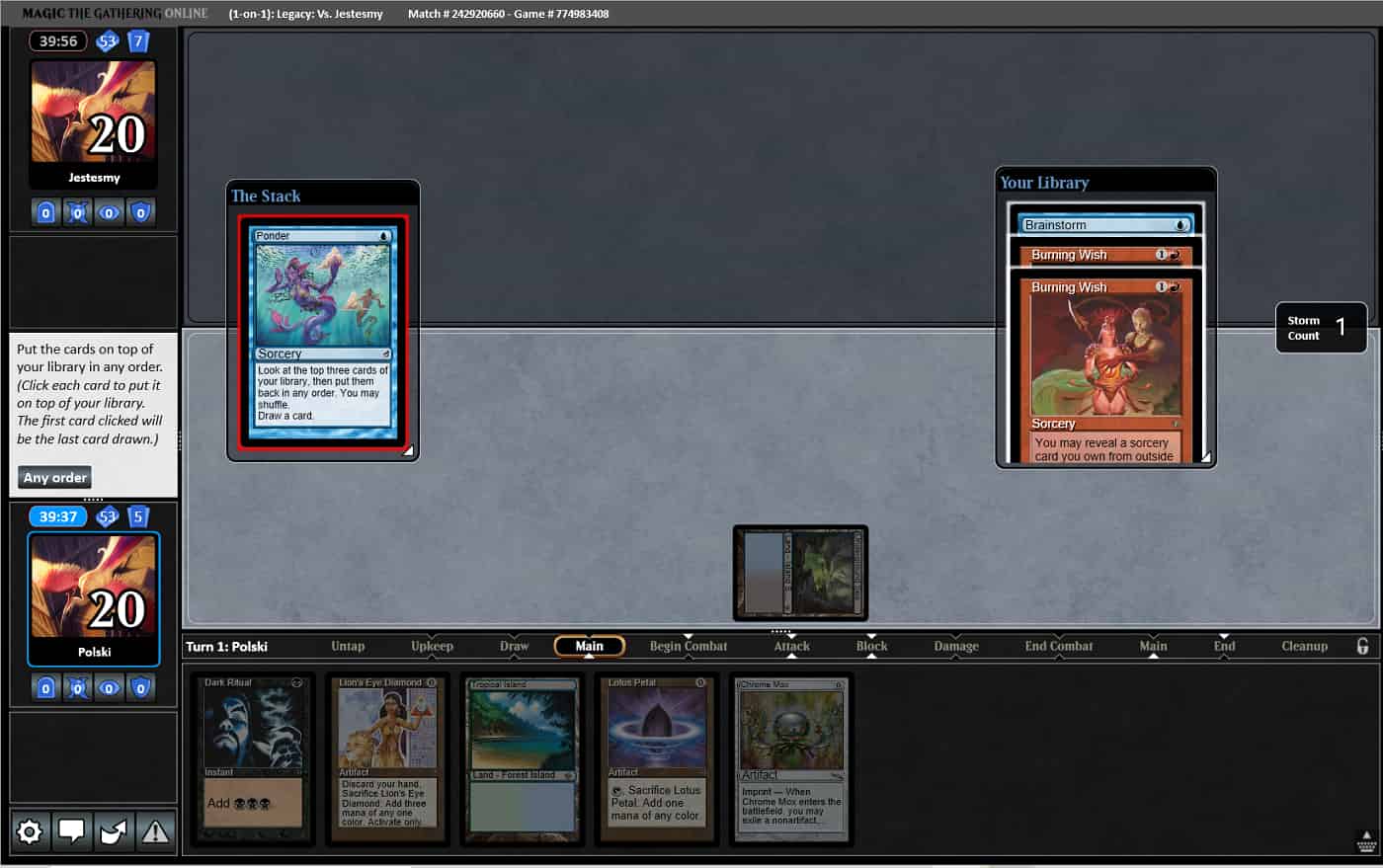 My line is to always go for the [[Echo of Eons]] in this situation. What would you do?


This matchup is really fun to play and has a lot of back and forth with interaction. A Jeskai deck with counterspells and main deck ways to destroy our artifacts is something new that TES has to adjust to, and we have. By configuring our main deck to [[Orim’s Chant]] and removing [[Defense Grid]], we are adjusting to this change. As new cards get added to Legacy decks, it’s important that you are adapting whatever deck you’re playing to account for these changes to the metagame. It’s a good reminder that the format is always changing, so we should always be playtesting. I hope you enjoyed this article, can take some of the lessons learned, and apply them to your own playtesting.