Titanic Dryad is a new Legacy deck because of the recent printing of [[Dryad of the Ilysian Grove]]. The deck’s objective is to cast [[Primeval Titan]] to tutor for [[Field of the Dead]] and [[Valakut, the Molten Pinnacle]] and then use [[Dryad of the Ilysian Grove]] to make all of the lands mountains. This gives Titanic Druid great late game capability that is difficult to beat. The form of disruption is [[Abrupt Decay]] and [[Chalice of the Void]] to slow the opponent down long enough to assemble this. It’s an exciting time for Legacy as new decks get created because of new cards, but we need to be prepared for these new decks.

How does Titanic Dryad matchup against TES?

[[Chalice of the Void]] – Titanic Dryad needs some way to be disruptive in the earlier turns. Typically, they’re going to choose either zero or one counter. Whichever number they select, we may be able to go off with enough cards of the other. Recently, I’ve found [[Chalice of the Void]] on zero to be more painful as we are so reliant on our artifacts.

[[Karn, the Great Creator]] – Not every list plays this card, but the ones that do have a higher chance of beating TES. The main text we need to pay attention to here is the very first line. See [[Null Rod]]. We have 18 artifacts in our deck, and they are quite crucial to being able to combo off. This is even worse for this version of the deck compared to previous versions that only played a dozen. At the very least, this will slow us down several turns giving the opponent the opportunity to tutor with Karn, the Great Creator to find another lock piece. We can win through this, but it will require the right type of hand.

[[Mindbreak Trap]], [[Trinisphere]], [[Leyline of the Void]], [[Sphere of Resistance]] – These are a few sideboard options that I have seen out of Titanic Dryad. Most of which are permanents so we will need to be prepared to bring in some bounce spells and answers to these as they prevent TES from comboing off. If I see a [[Mindbreak Trap]], I would consider leaving in some number of [[Defense Grid]].

Titanic Dryad doesn’t have many ways to prevent TES from comboing off and is several turns slower at winning the game. This is important because TES isn’t pressured to keep a fast hand. We don’t have to worry about counterspells, discard spells, or a fast clock. We just need a reasonable hand and a way to remove a piece of permanent hate. We either need to win before a [[Chalice of the Void]] enters the battlefield or to wait to remove it and then combo off. Waiting a couple of turns to remove it isn’t much of a problem because the opponent can’t win during the first few turns of the game. The ideal hand is a turn 2-3 win with a bounce spell to handle a piece of permanent hate. Sticking with this type of game plan will give TES a favorable matchup.

Removing [[Veil of Summer]] and [[Defense Grid]] is easy because that’s not the axis that Titanic Dryad is trying to fight us on. They are going to be using several different permanents, so we want ways to remove them. That means bringing in our bounce spells, [[Abrupt Decay]], and [[Crash]]. I bring in [[Crash]] because most of the permanents that are used to disrupt us are artifacts. If I see [[Mindbreak Trap]] then I will consider bringing back in some number of [[Defense Grid]].

During the first game, I had to mulligan down to five cards and my opponent had a [[Chalice of the Void]] for one. A few turns later, they had a [[Primeval Titan]] for [[Valakut, the Molten Pinnacle]]. I couldn’t play many spells, so I conceded. I took the play for the second game and had a much better hand. 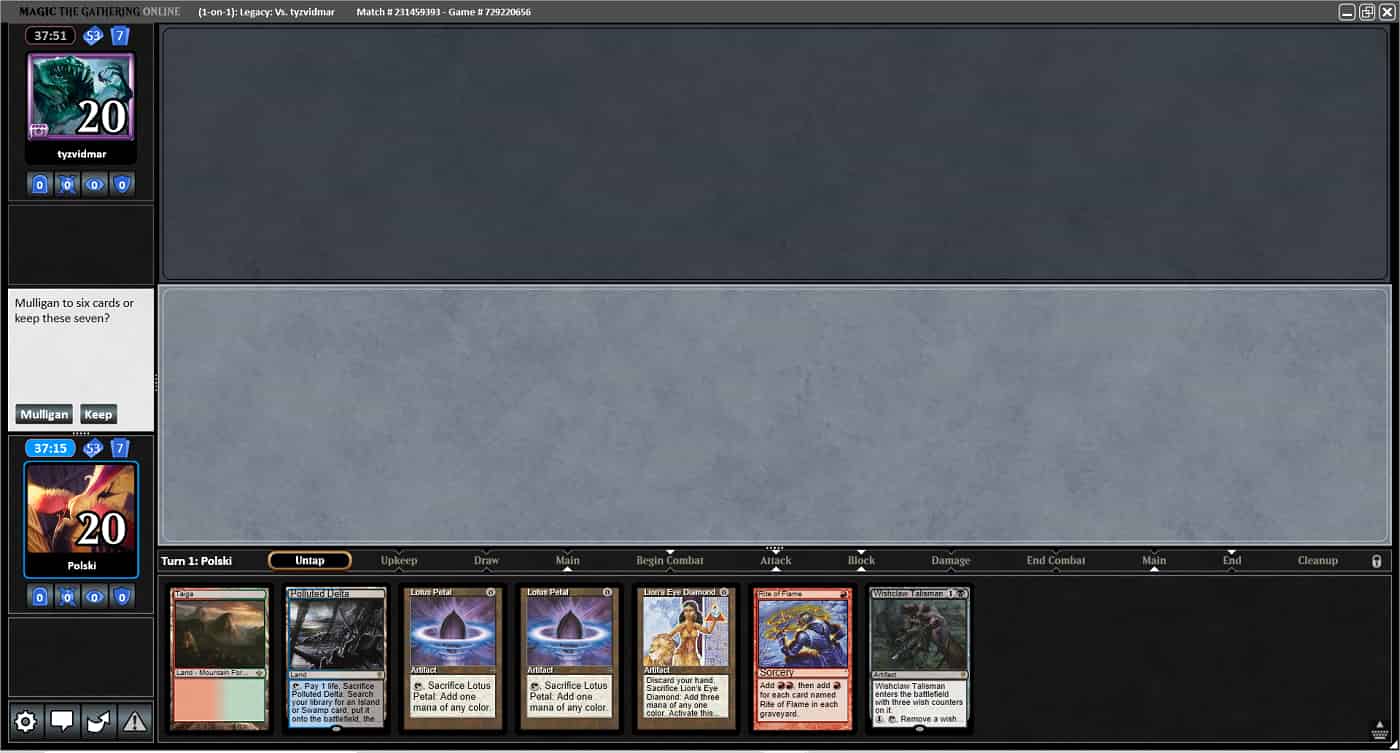 With this hand, I had the ability for a turn-one [[Echo of Eons]], and that’s exactly what I did. My new seven cards were pretty close, but I thought it was a little short. 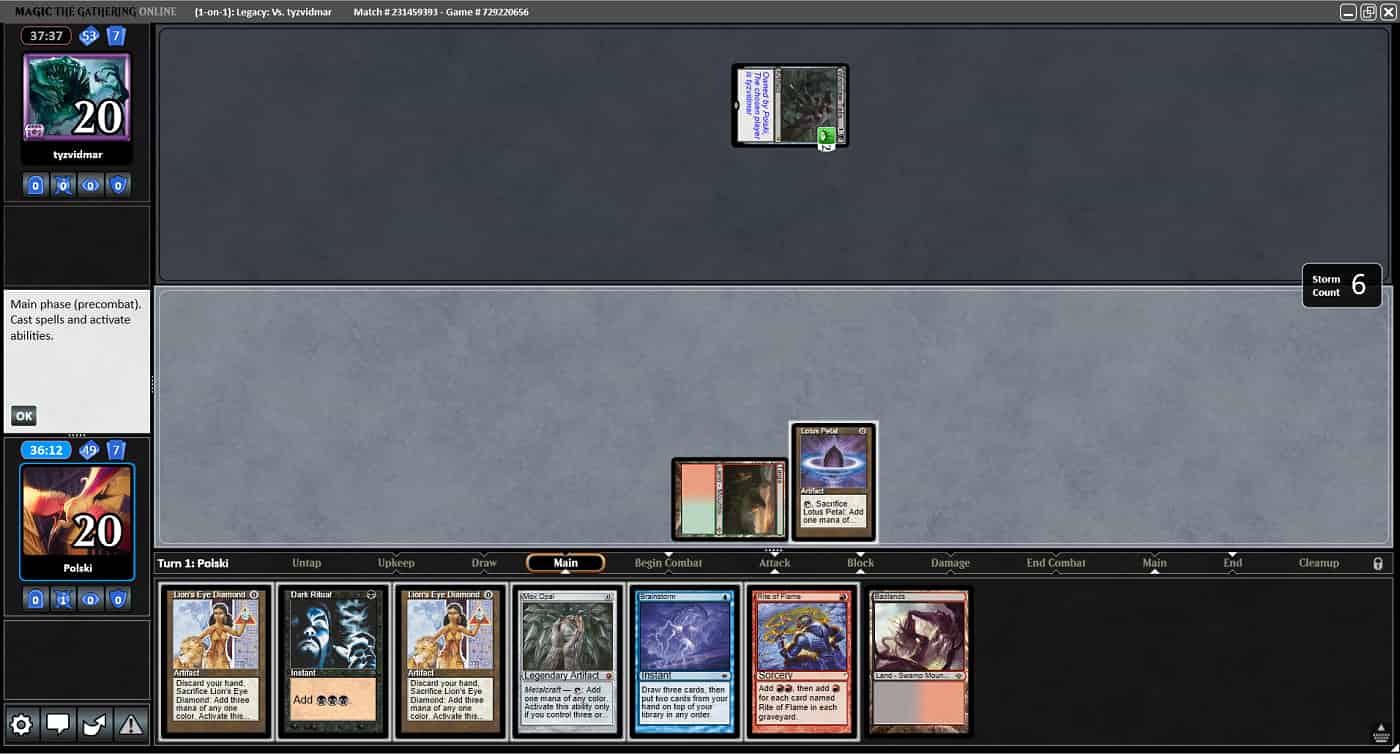 I debated casting the [[Brainstorm]] of the [[Lotus Petal]] or the [[Mox Opal]] now or next turn. I chose to wait to have access to more mana, but in hindsight, I probably should have. If I was not going to, then I definitely should have played out my artifacts to play around [[Chalice of the Void]] for zero. 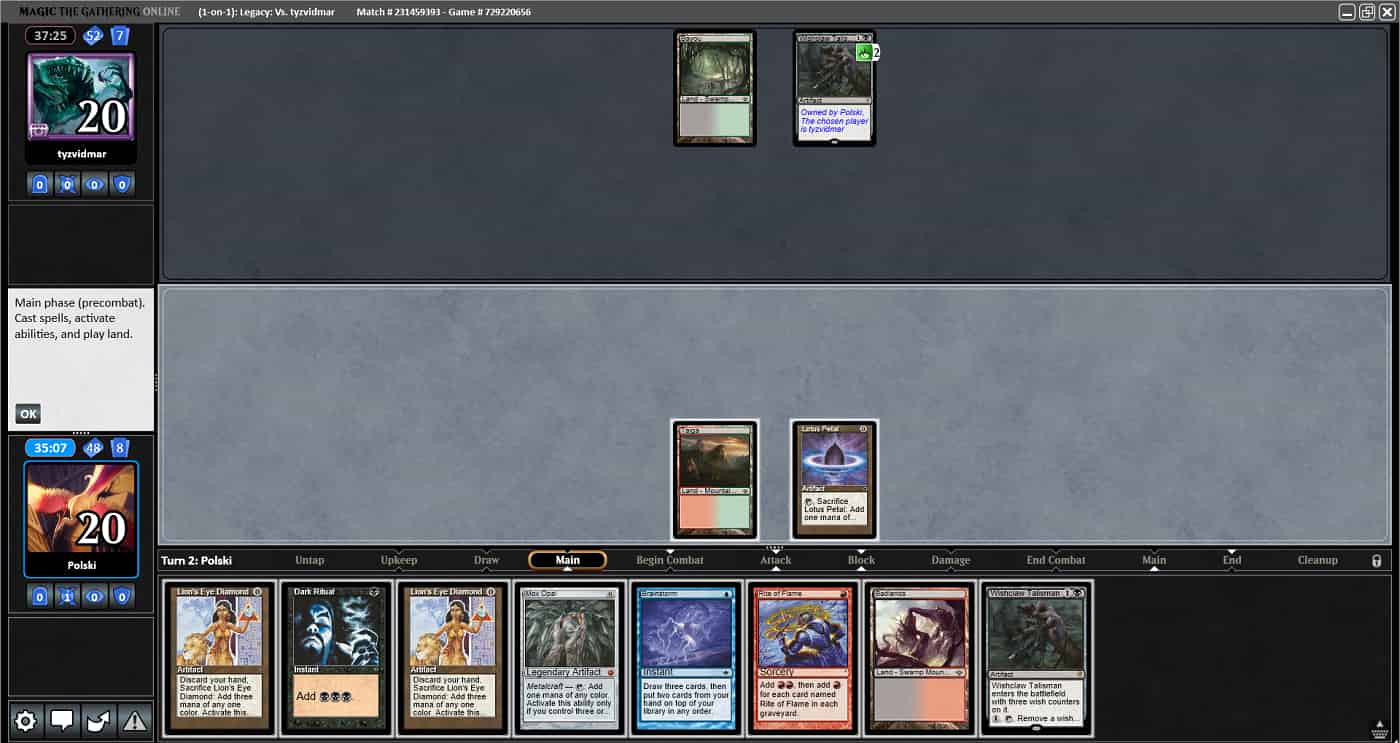 Thankfully, I wasn’t punished during the opponent’s turn, and I drew the perfect card. [[Wishclaw Talisman]] would allow me to go for [[Burning Wish]] into [[Peer into the Abyss]]. That should be good enough to win here. 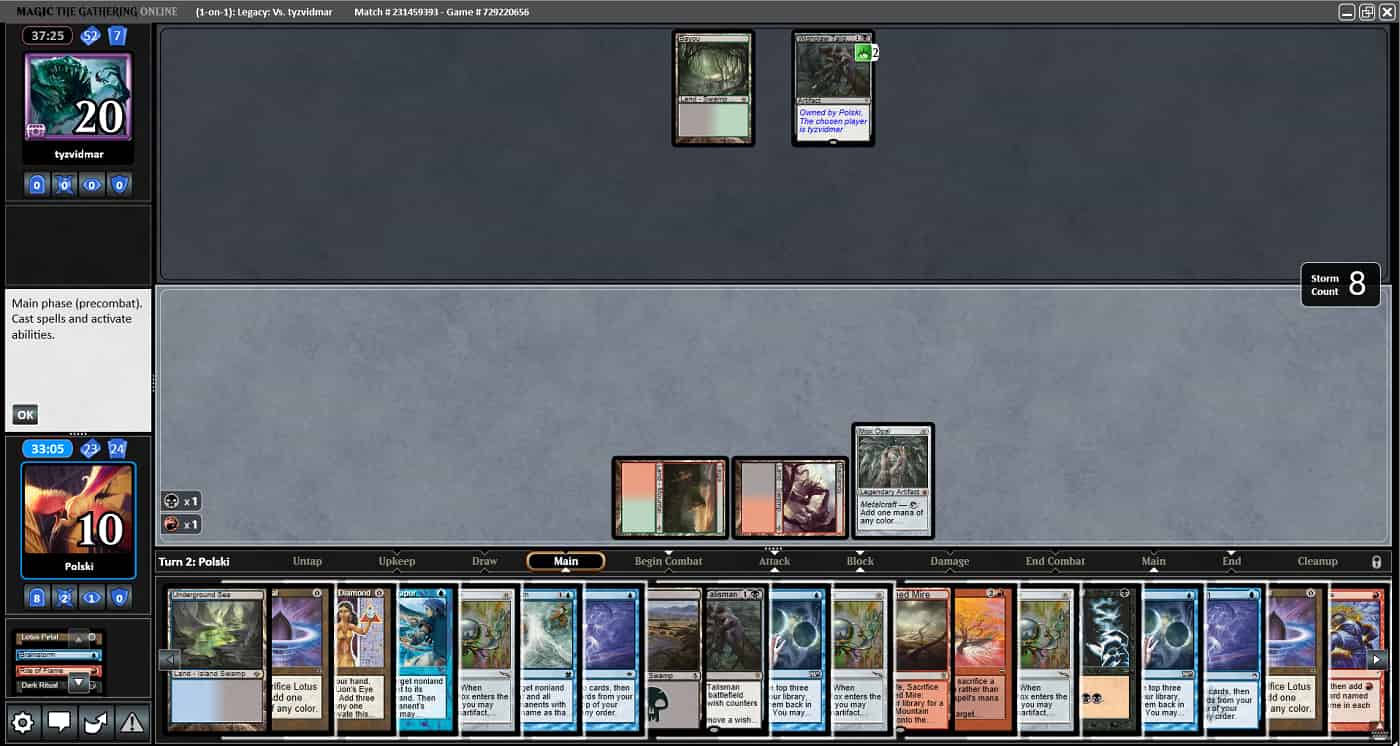 The [[Peer into the Abyss]] was great, and I was able to cast [[Grapeshot]] for more than enough storm to win. 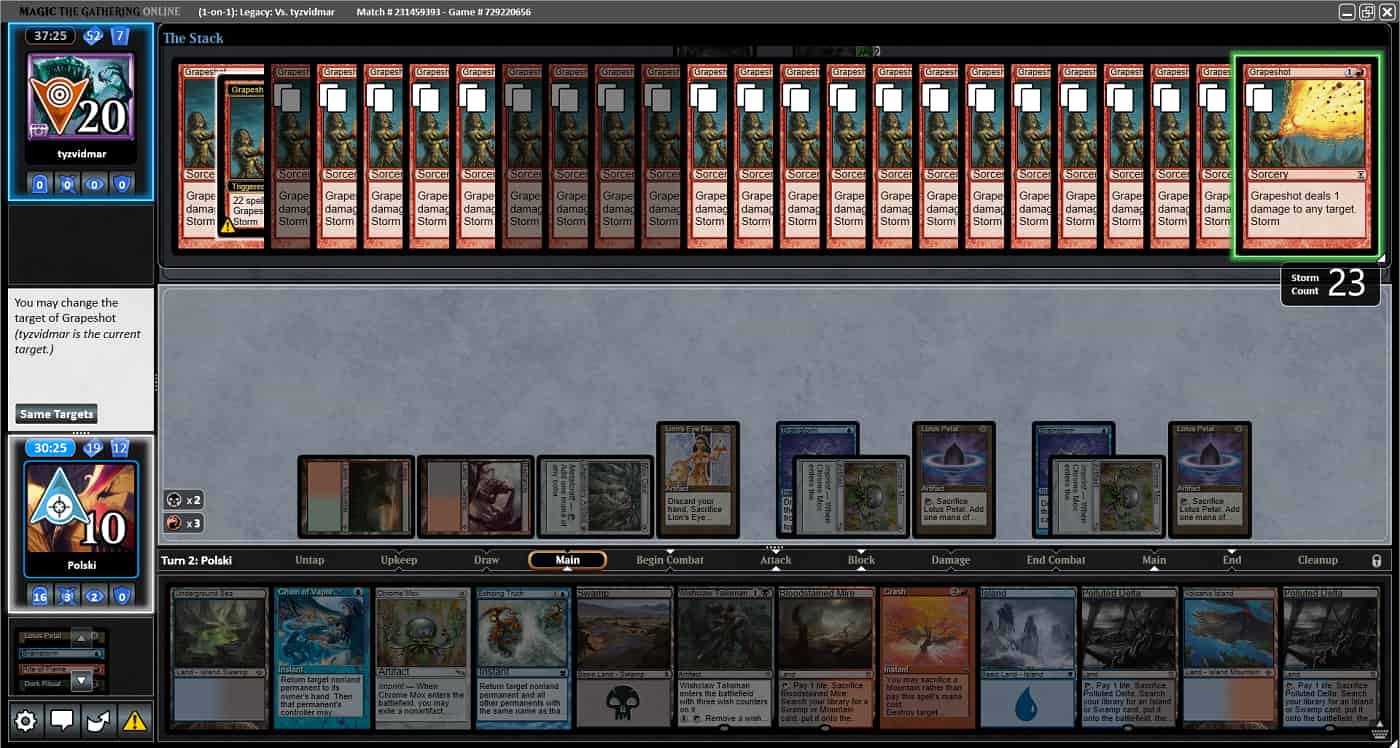 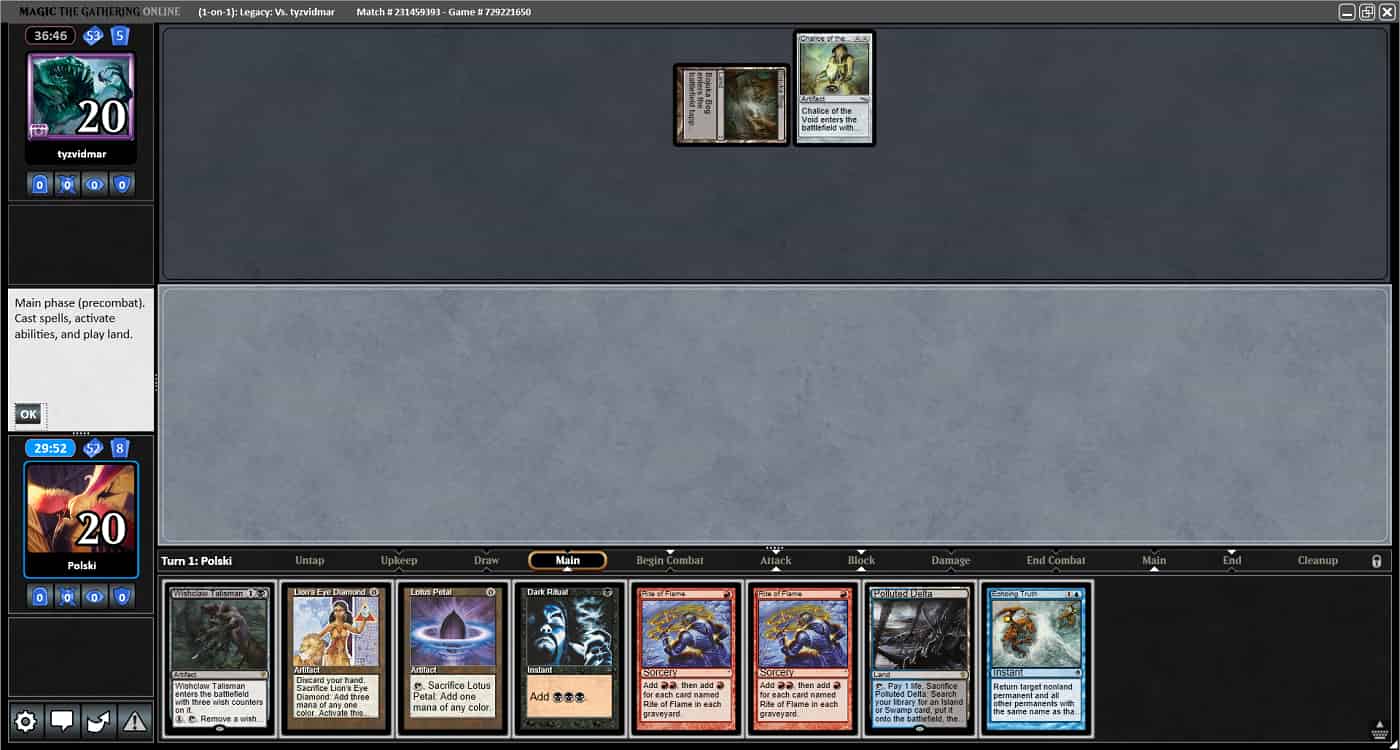 I’ve missed my second land drop and my opponent plays out a few creatures of their second and third turn. On my third turn, I drew my second land. I now had the ability to cast the [[Echoing Truth]] and hope to win on the following turn. I just needed my opponent to not play anything too good on their turn. They just played an [[Arasta of the Endless Web]]. That seemed good against an [[Empty the Warrens]], but that wasn’t my plan here. On the opponent’s end step, I cast the [[Echoing Truth]] on their [[Chalice of the Void]]. 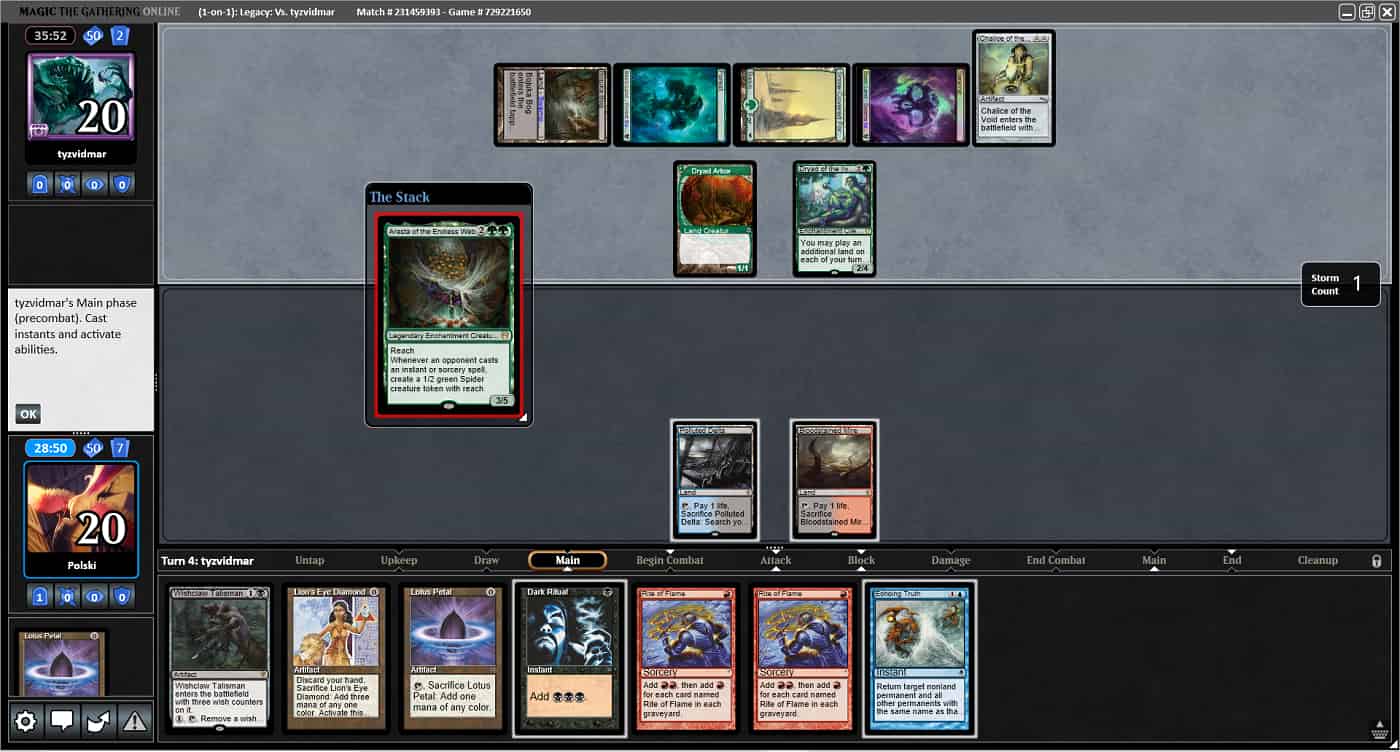 I was then able to combo off. I decided to tutor for [[Ad Nauseam]] and cast it. I figured from 15 life that would be good enough. 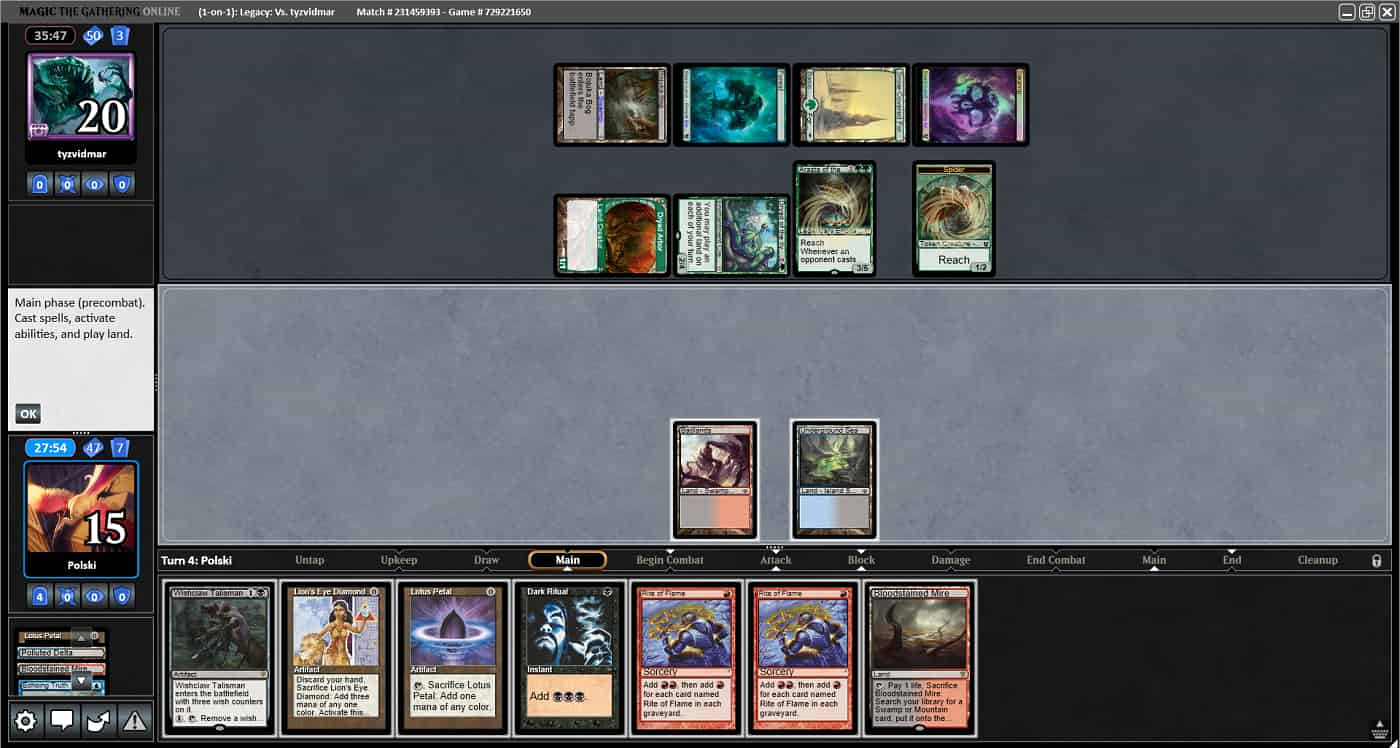 I went down to one life from revealing [[Echo of Eons]], but it was enough to win the game. 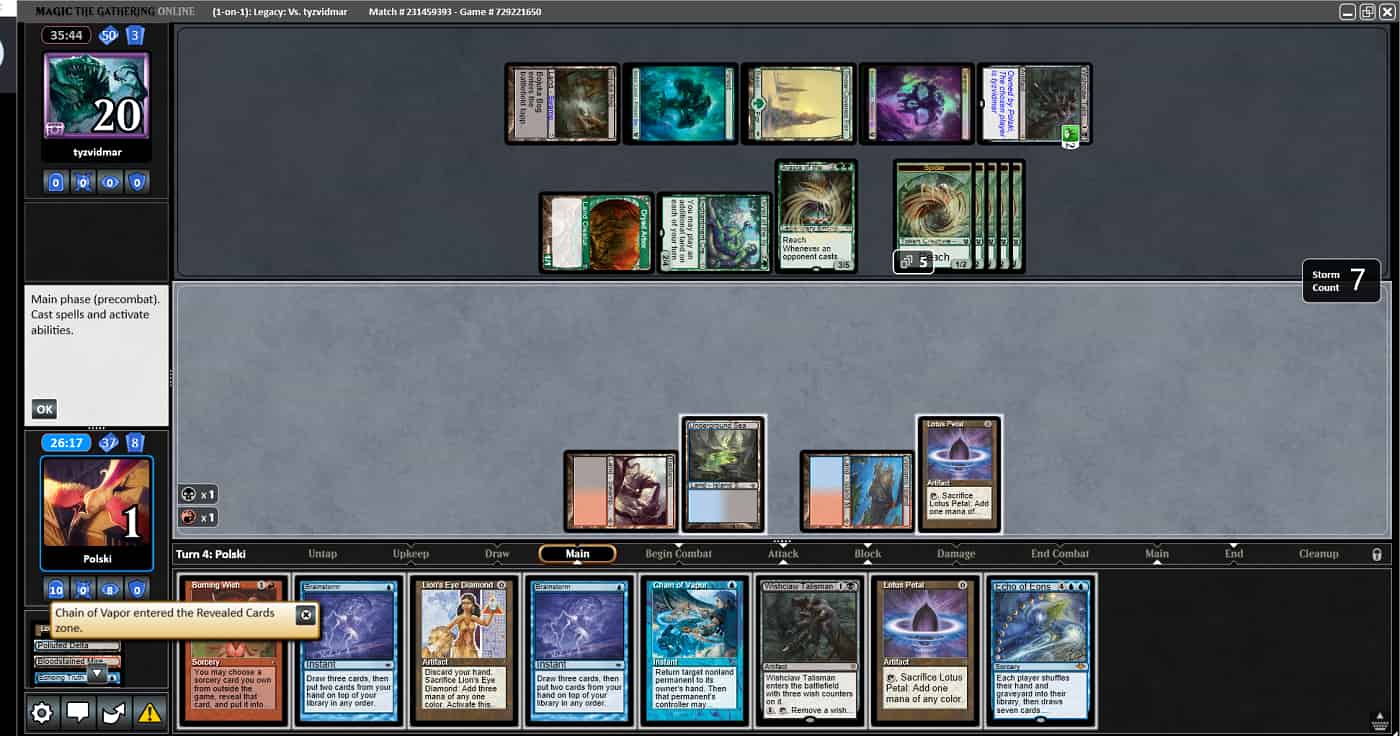 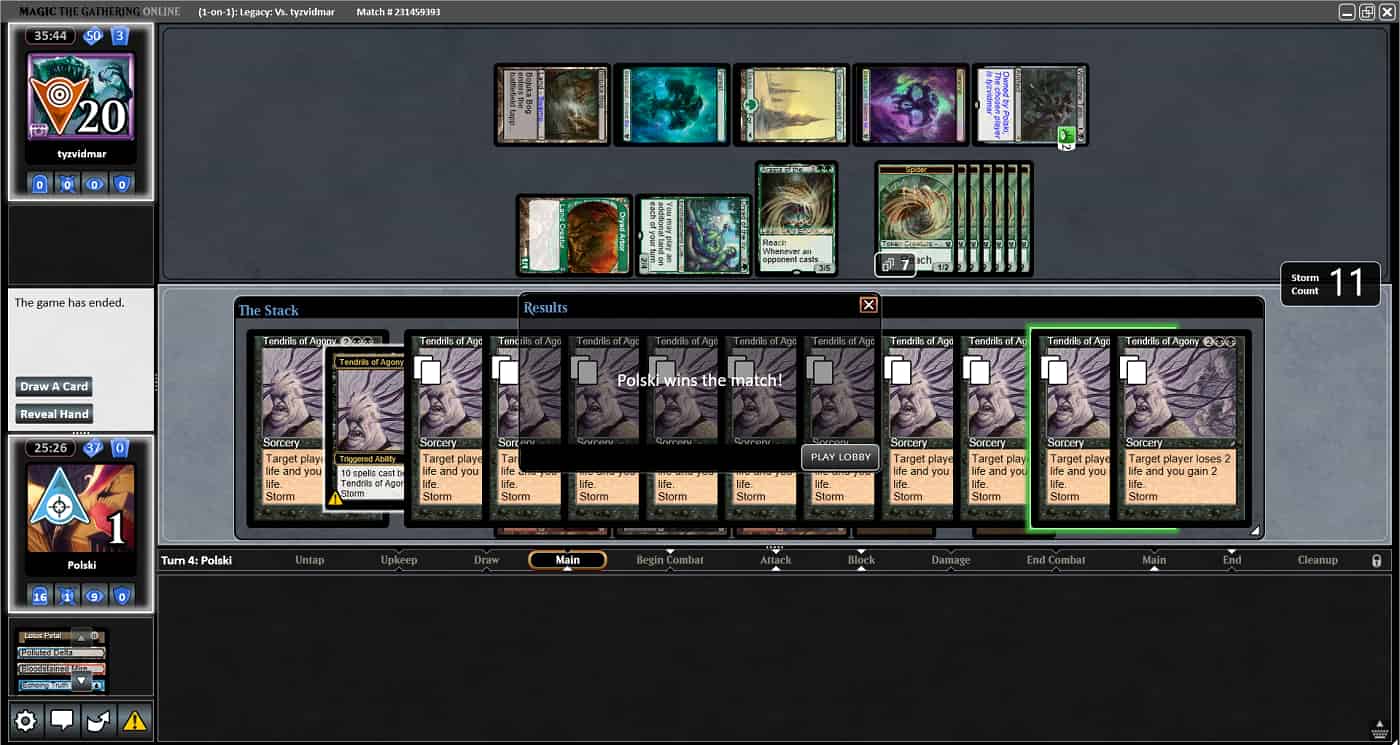 [[Primeval Titan]] decks have been great in Standard and Modern, but with the printing of [[Dryad of the Ilysian Grove]], I am glad it also sees some Legacy play. We have seen many cards printed that are changing Legacy. As the Legacy metagame involves, it’s important we keep practicing and understanding our matchups inside and out. I hope you enjoyed this article, and I wish you the best of luck in your own testing!